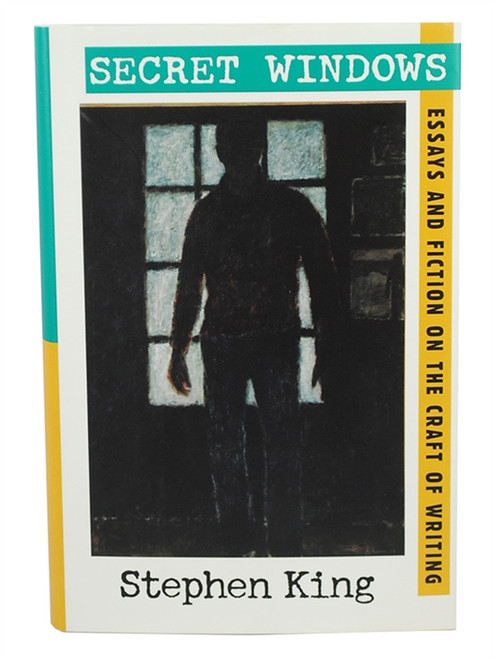 Personally signed by Stephen King with a personal inscription.

Book-of-The-Month Club 2000. Stephen King "Secret Windows: Essays and Fiction On The Craft of Writing". Introduction by Peter Straub. This is the only edition published for this title. Signed by the author on the date of publication with a personal inscription:

Very Fine/Very Fine for both hardcover and dust-jacket, without any discernible flaws. A wonderful bright clean copy with sharp corners that are not bumped and free of any markings, writings, or stamps. A flawless unread book with a square and tight spine. No bookplates attached or indication of any removed.

One day, while in his laundry room, Stephen King squeezed behind his dryer, looked out of a window, and realized that he was seeing a garden that he'd never noticed before. This is what great writers do, he thought. They look out of an almost forgotten window at an angle that renders the common extraordinary. Secret Windows: Essays and Fiction on the Craft of Writing is an exclusive Book-of-the-Month Club anthology of hard-to-find non-fiction pieces, little-known interviews, short stories, and articles about writing for those looking for direction on how to find their own "windows"-or for anyone wishing to be touched by Stephen King's humor and wisdom. Included in this collection are unpublished early fiction (very early; King was twelve when he wrote "Jumper" and "Rush Call"); a pre-Carrie article with tips for selling stories to men's magazines ("The Horror Writer and the Ten Bears: A True Story"); advice to his son on writing (with the look-twice title "Great Hookers I Have Known"); recommendations to teen readers in a Seventeen article ("What Stephen King Does for Love"); a long chapter from his wonderful treatise on the horror genre ("Horror Fiction" from Danse Macabre); and even a first-time-in-print short story, "In the Deathroom" (just for fun). Intended as a companion to Stephen King's 2000 book On Writing, Secret Windows: Essays and Fiction on the Craft of Writing captures the author's mind in action-spontaneous, subversive, quirky, yet morally and ethically serious. Together, they comprise virtually the sum of the thoughts on writing of the dominant force in American fiction for the past three decades.

Secret Windows: Essays and Fiction on the Craft of Writing is a collection of short stories, essays, speeches, and book excerpts by Stephen King, published in 2000. It was marketed by Book-of-the-Month Club as a companion to King's On Writing. Although its title is derived from a King novella (Secret Window, Secret Garden), it is not otherwise related to that novella or the film adaptation, Secret Window.

Secret Windows is a collection of stories and essays written by King that are primarily concerned with writing and the horror genre. Several of the entries have been published elsewhere, including introductions King had written for other authors' novels, as well as introductions and essays from King's previous books. This volume also includes several short works that had not been previously published elsewhere, including lectures given by King, an interview with King conducted by Muriel Gray, a never-before-published short story by King, titled "In the Deathroom," and an introduction written by Peter Straub.