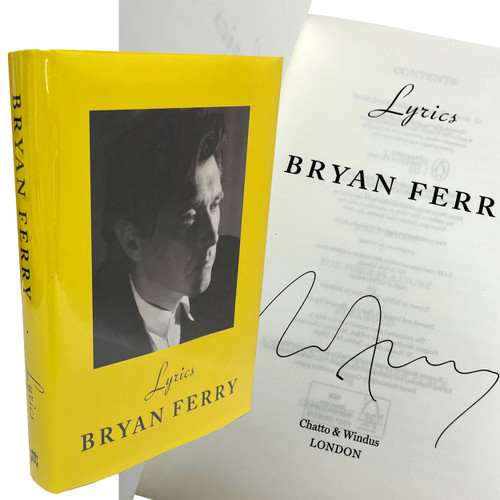 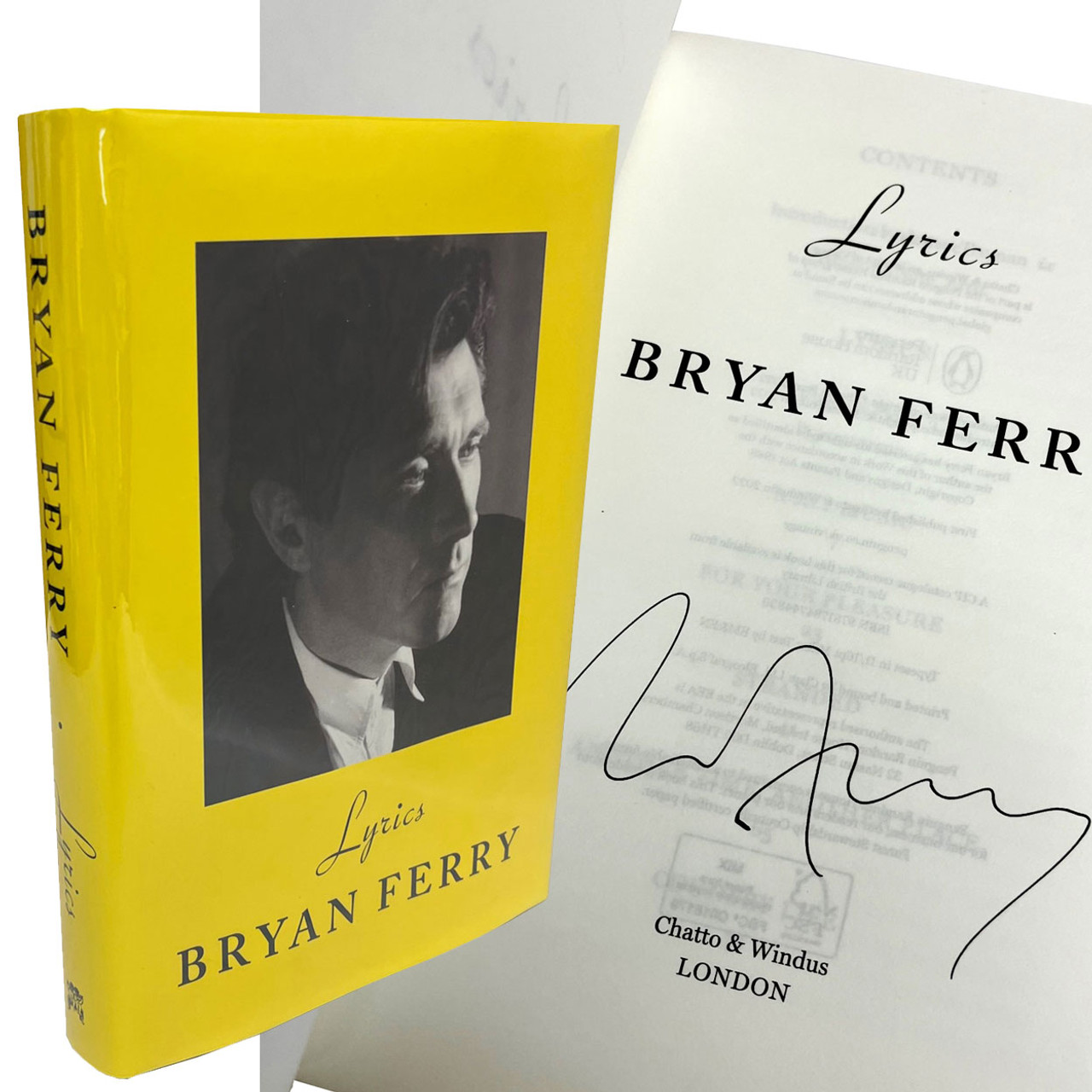 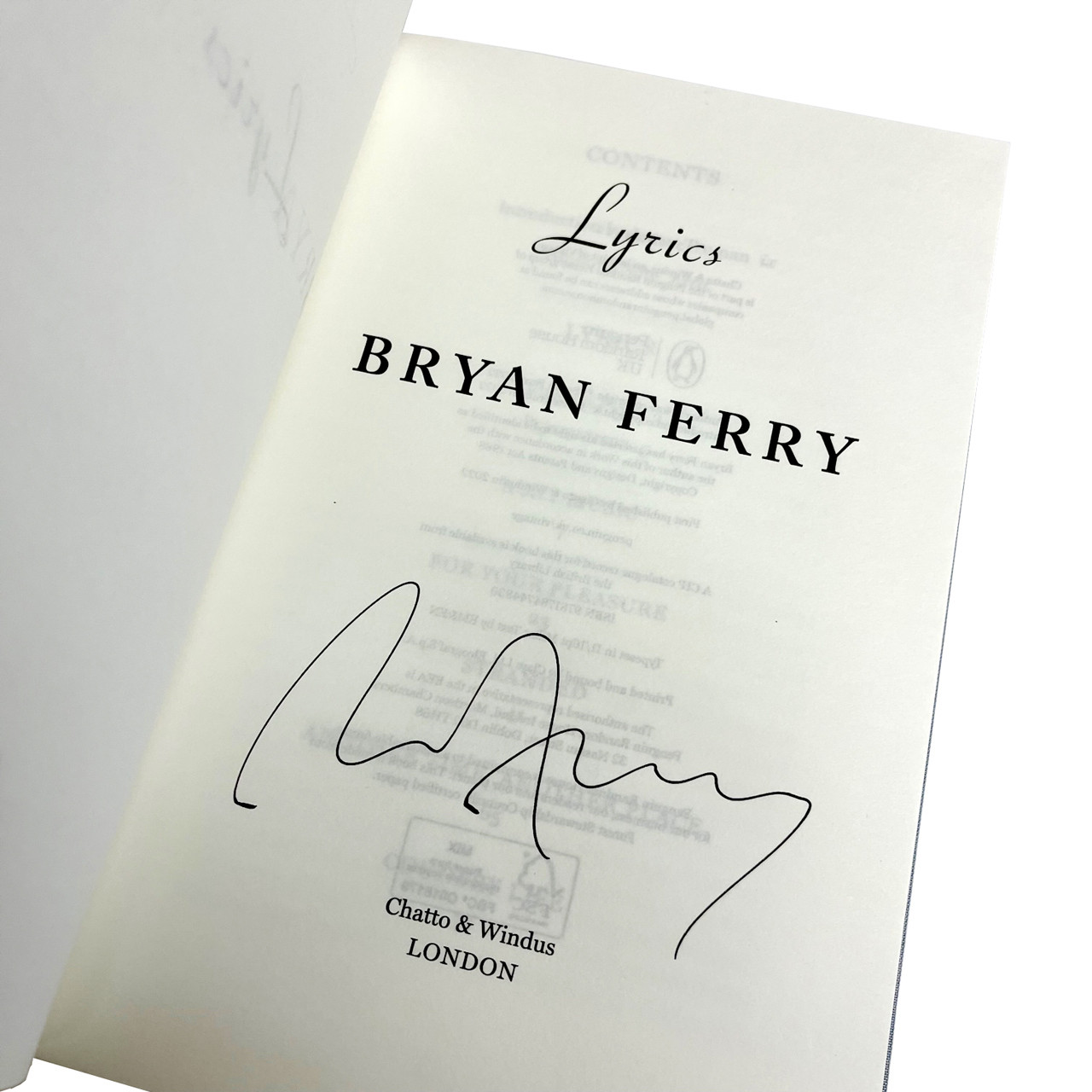 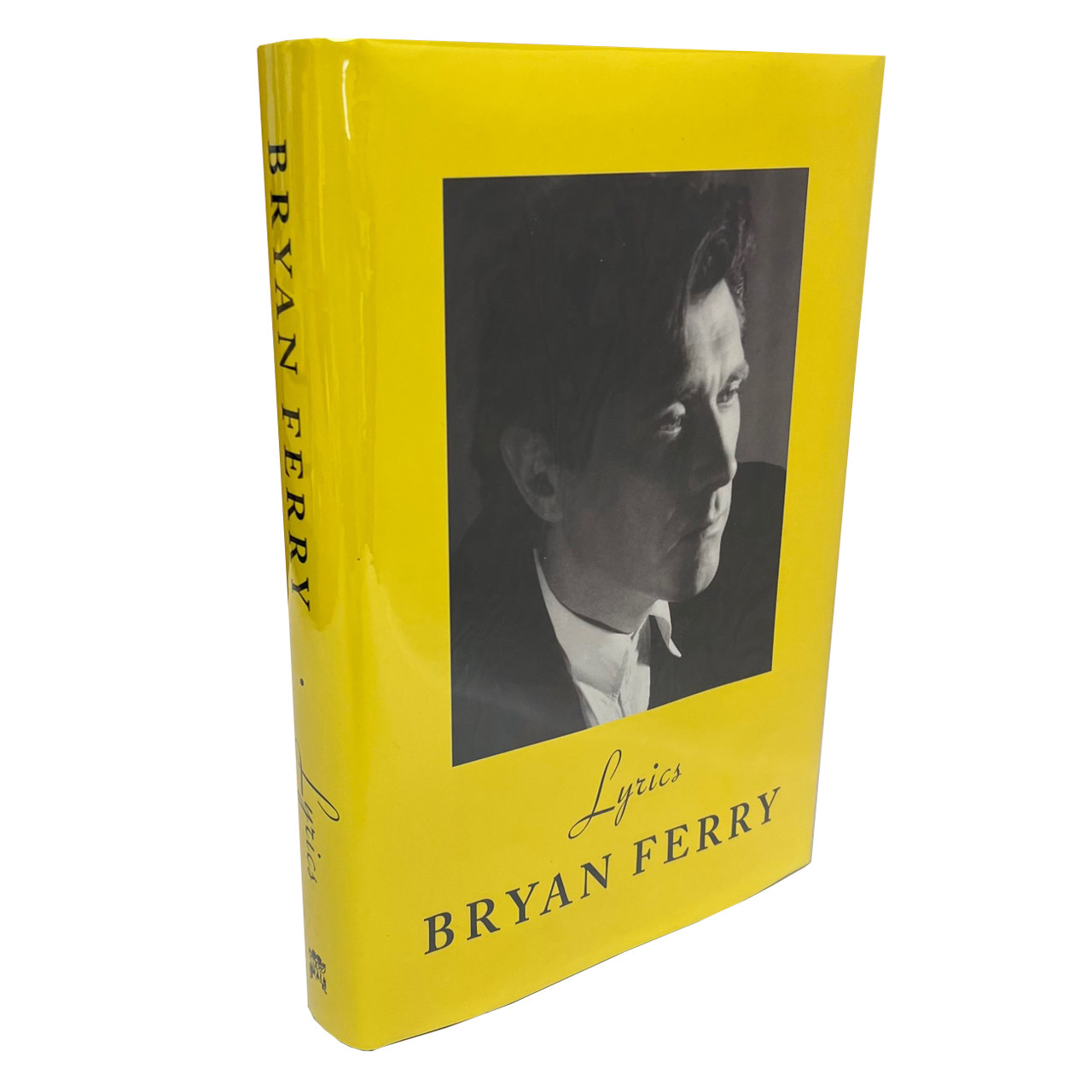 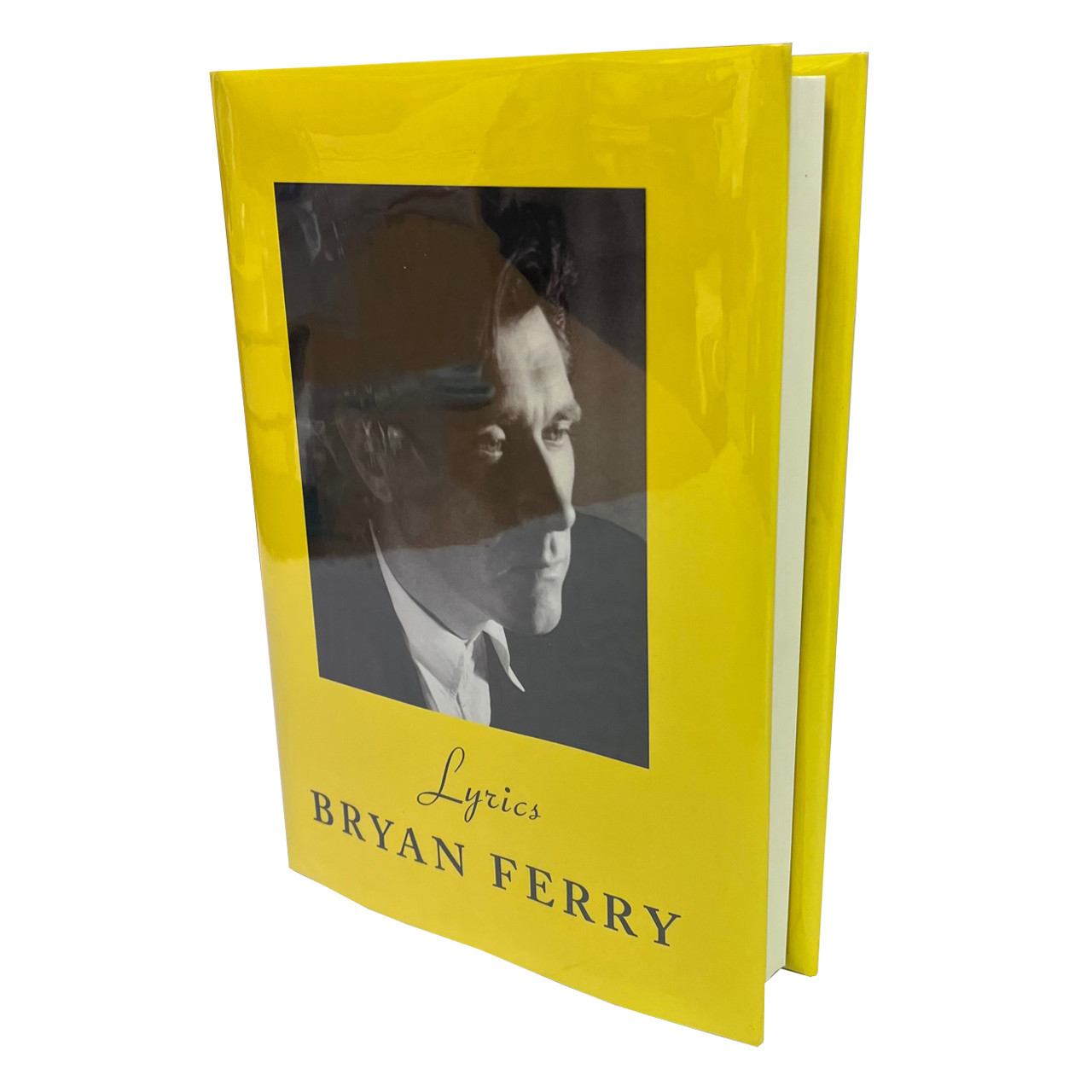 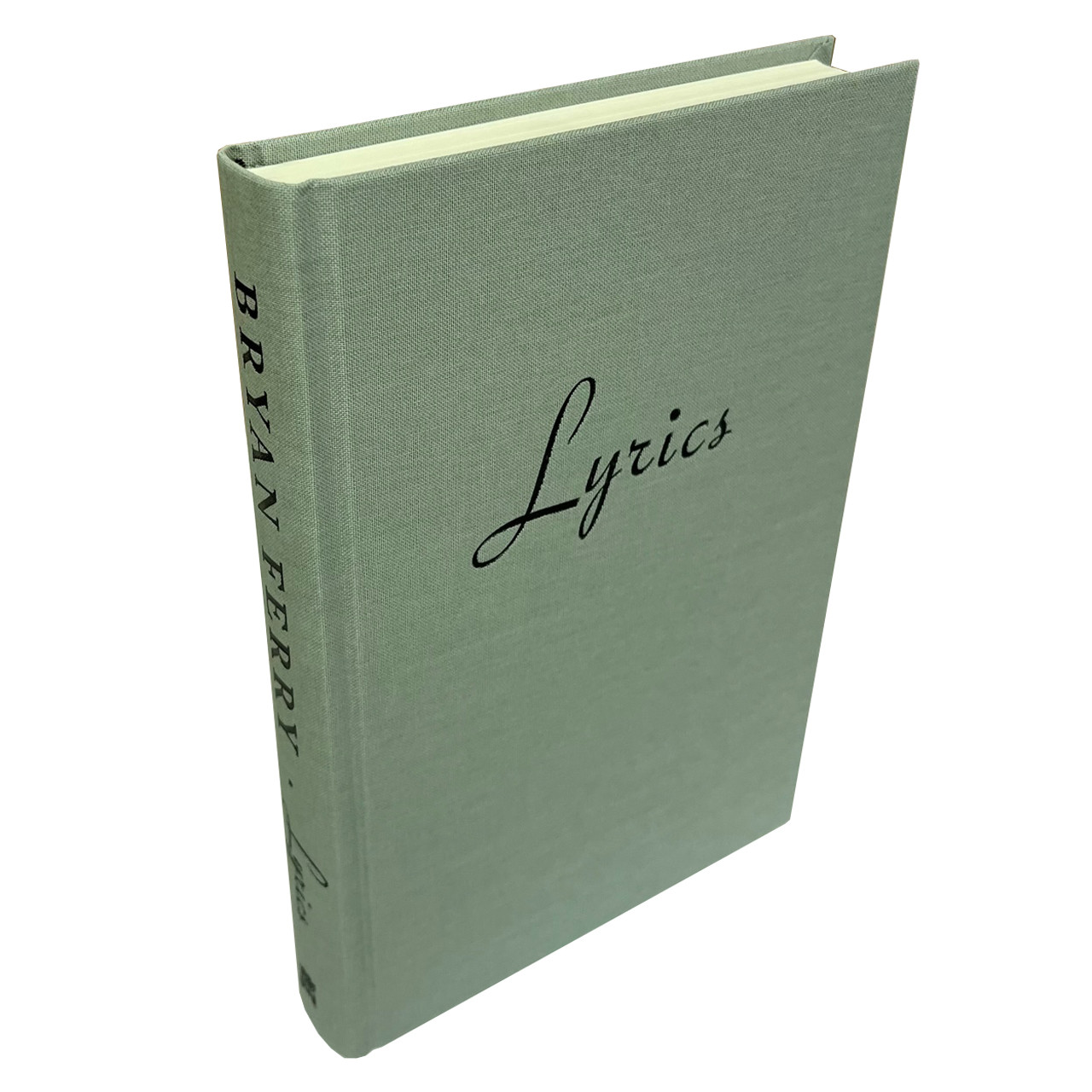 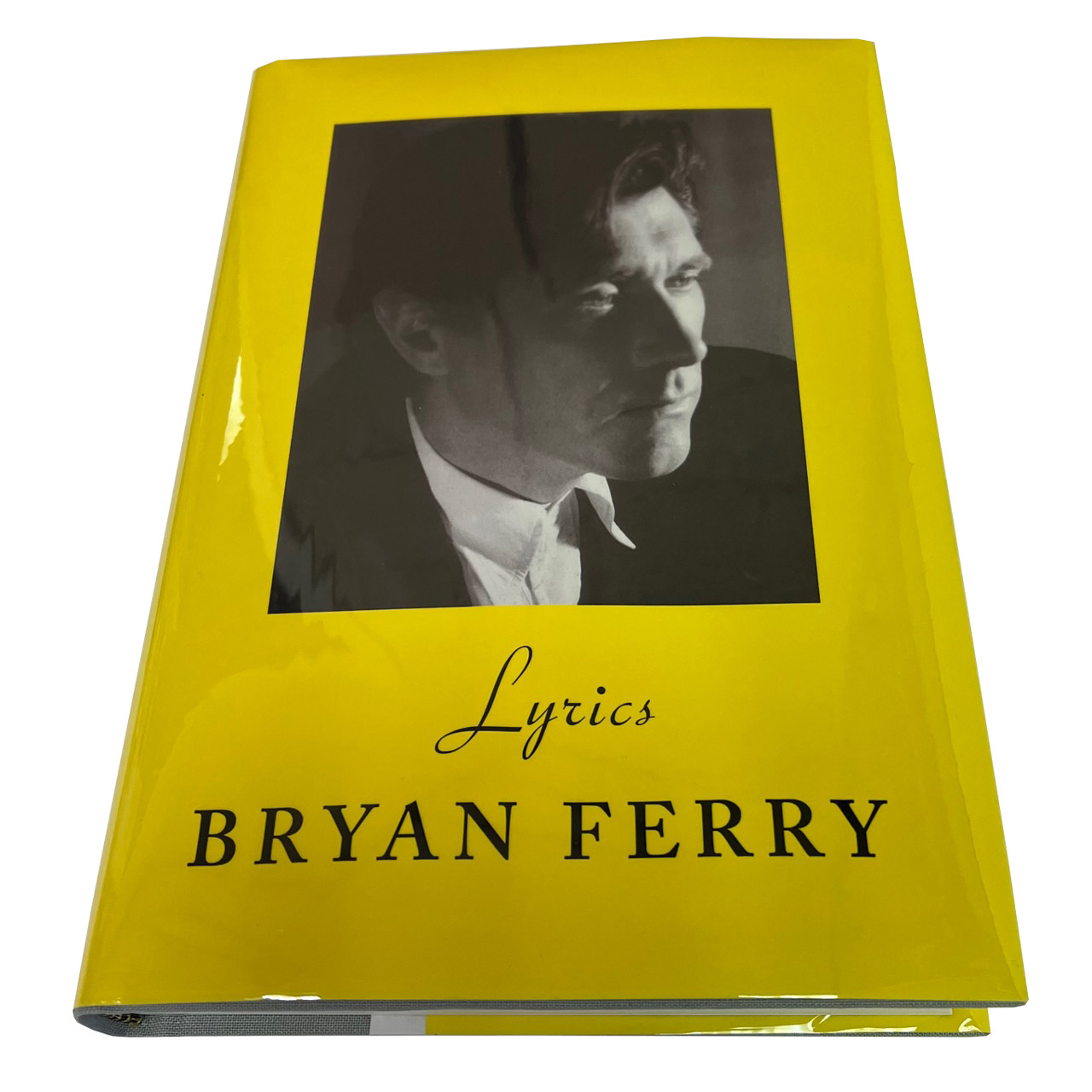 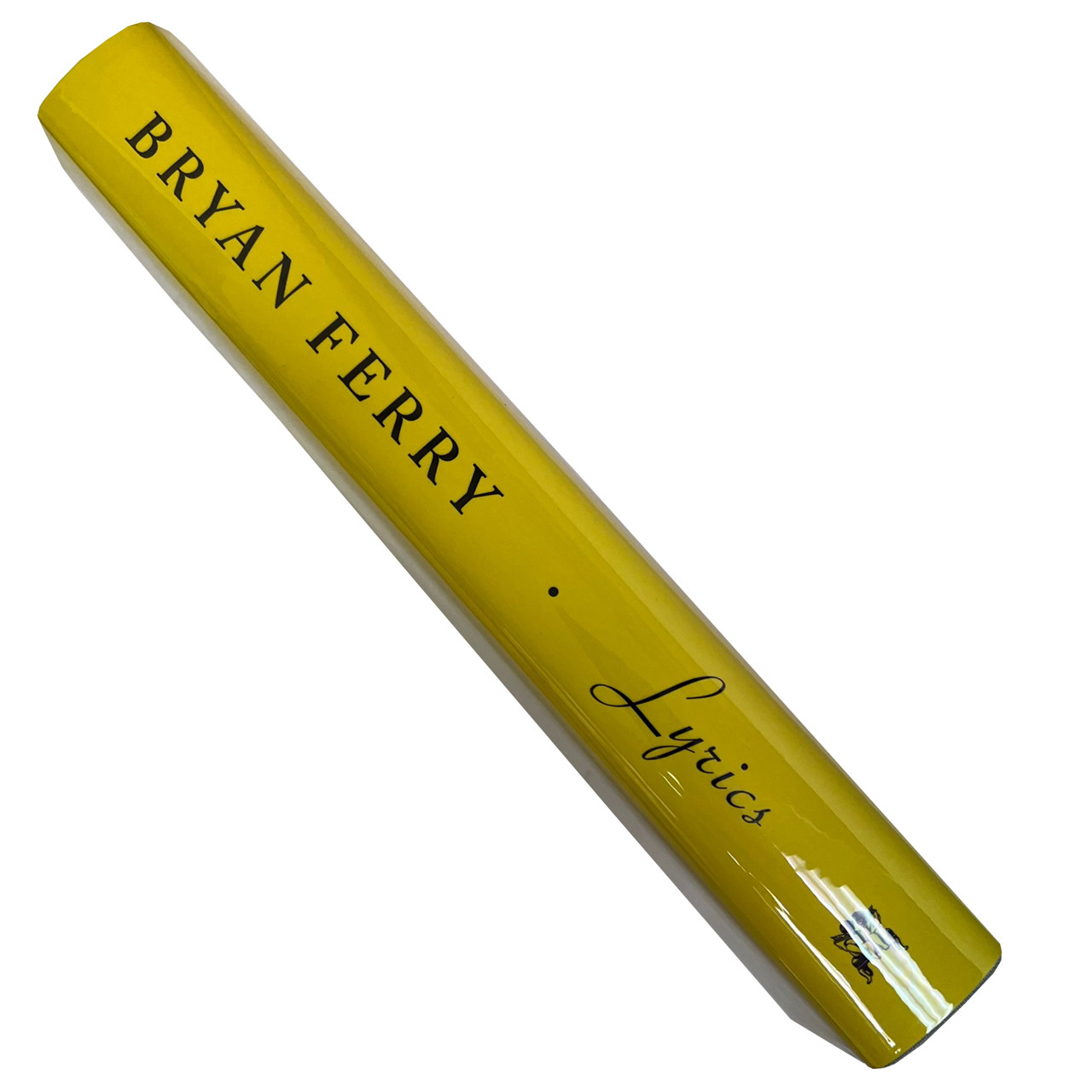 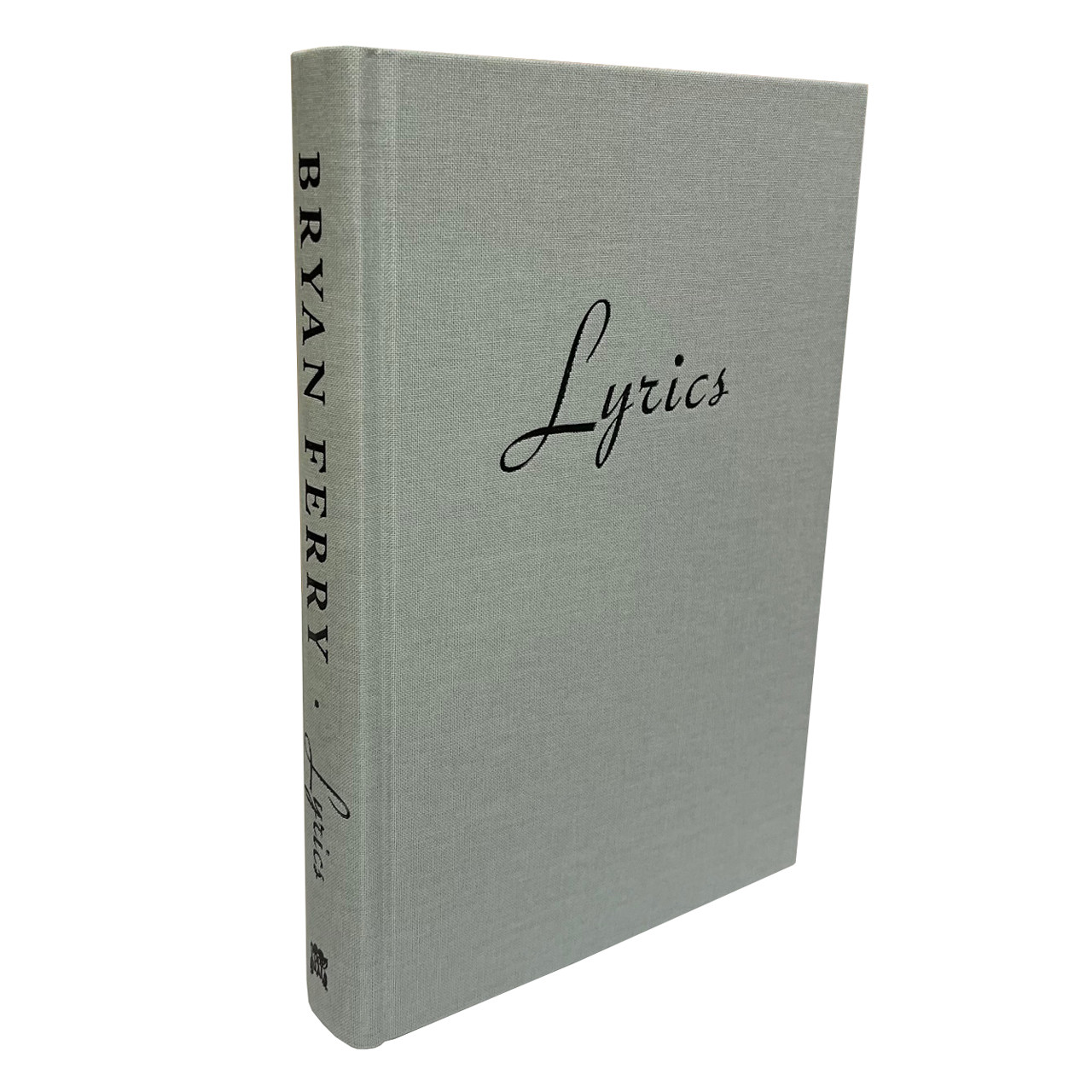 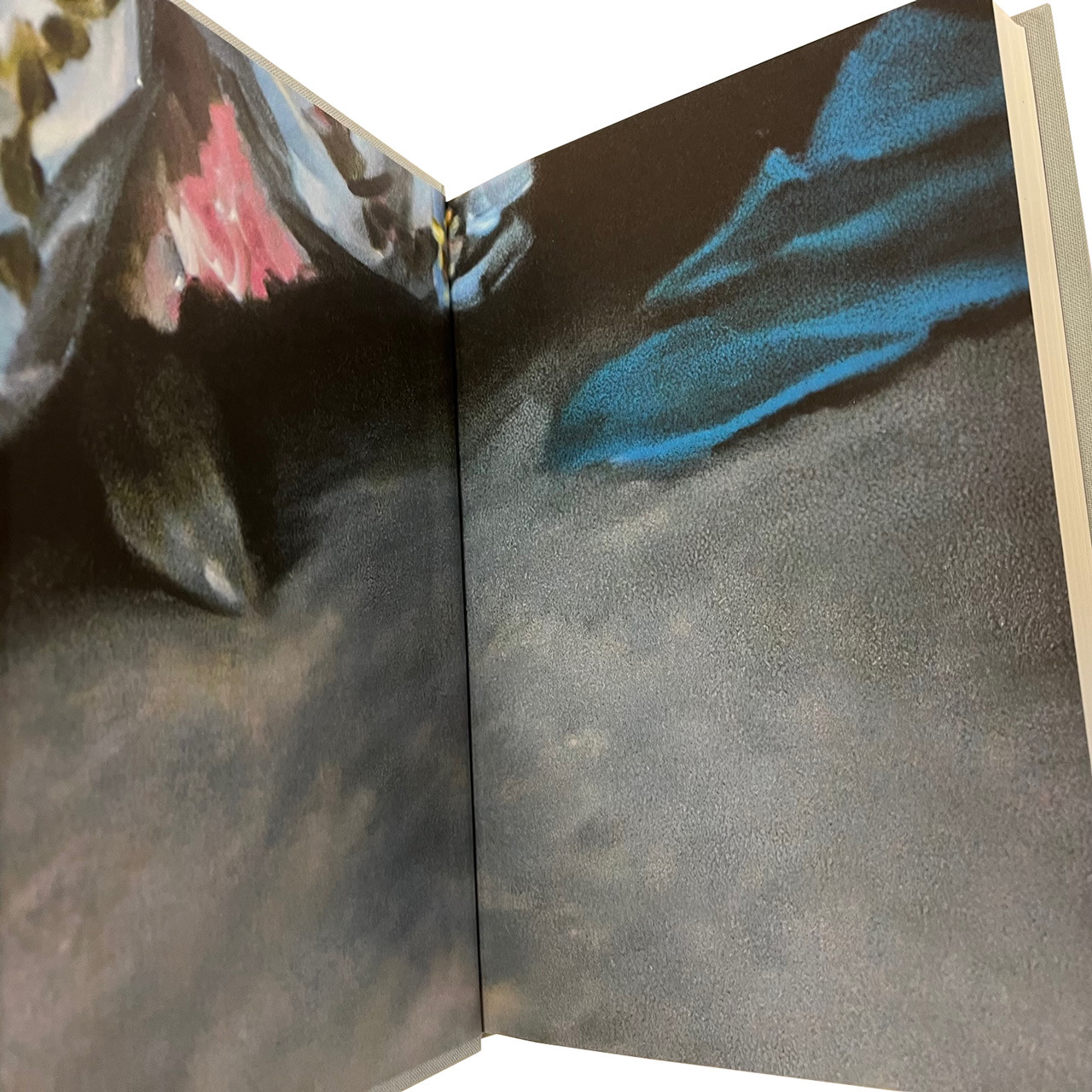 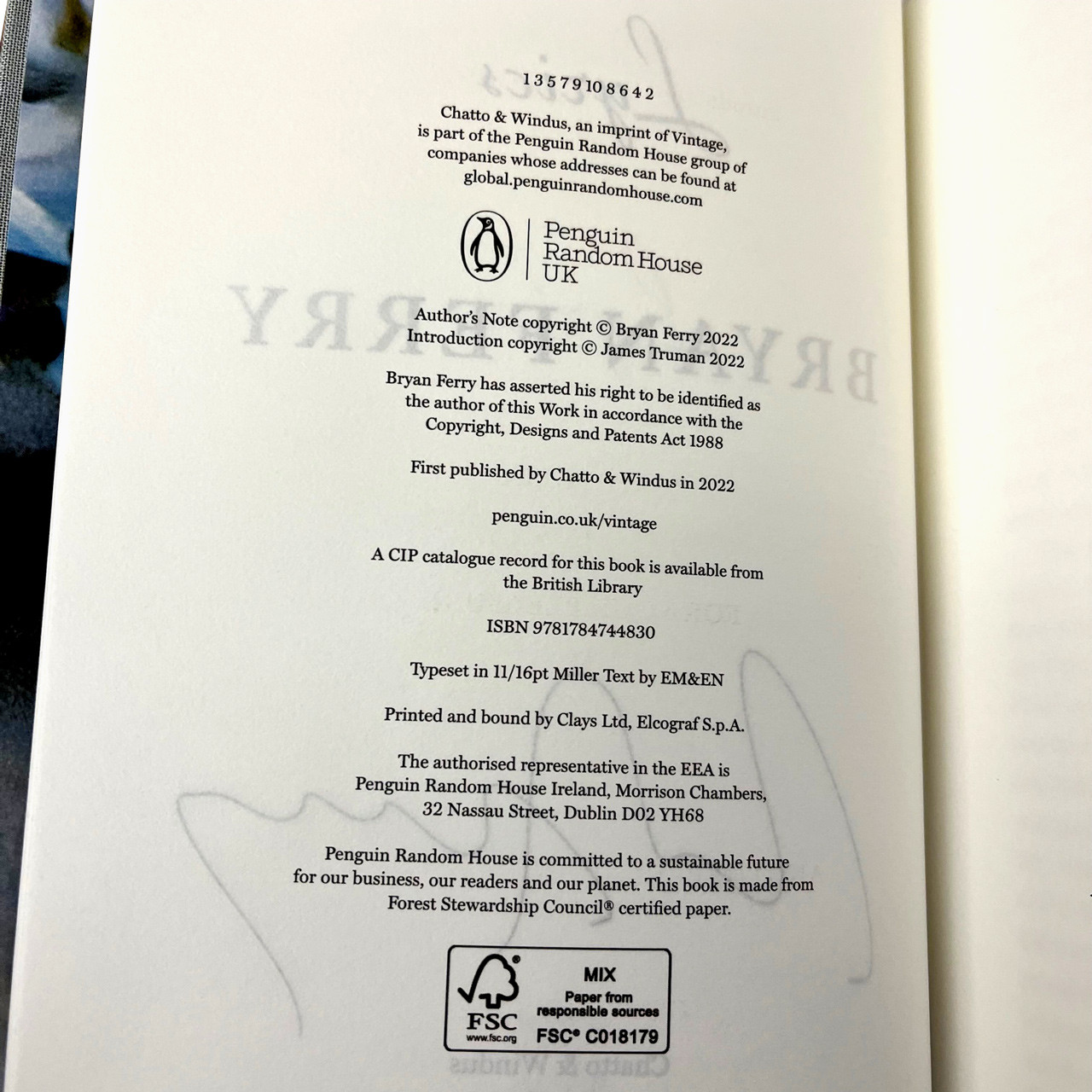 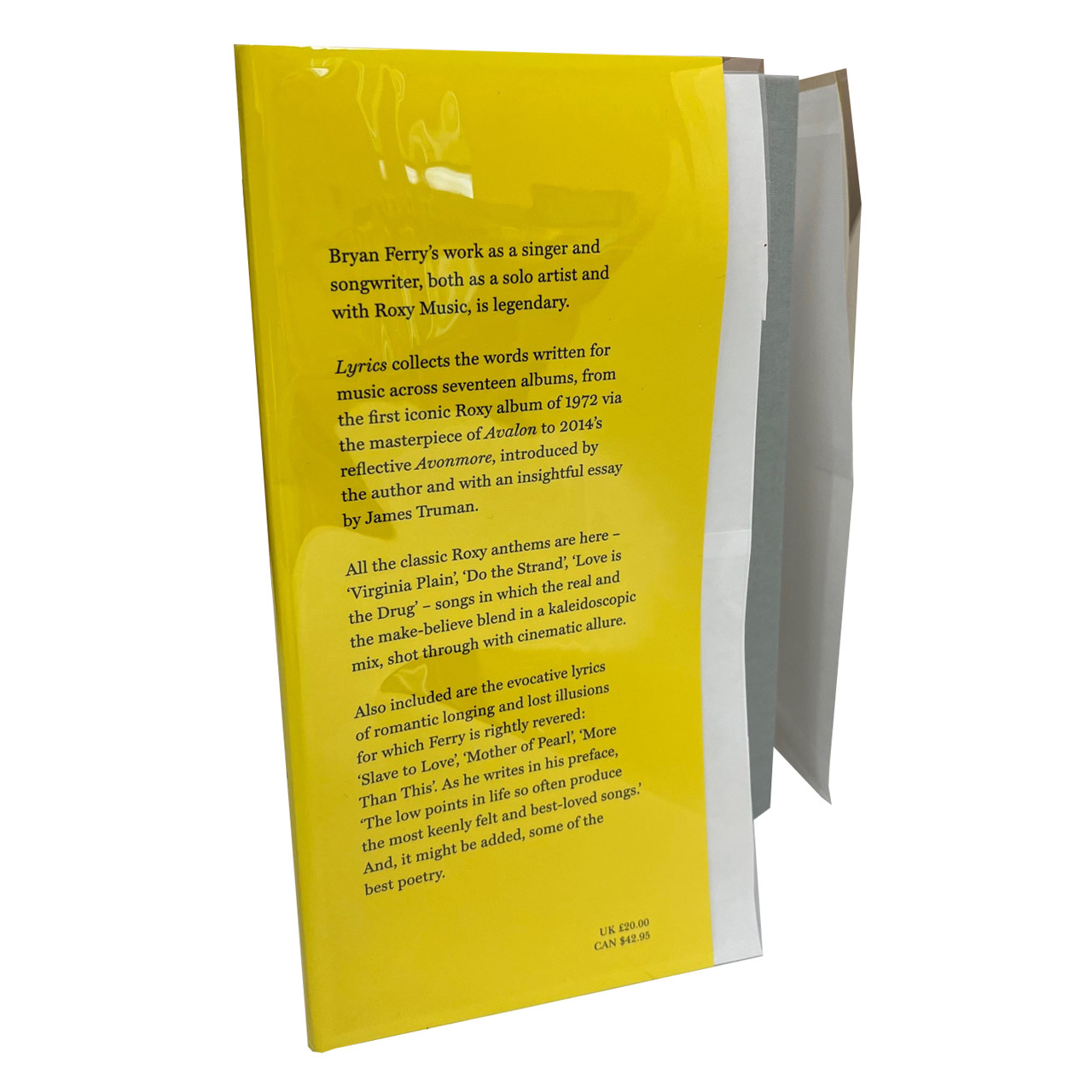 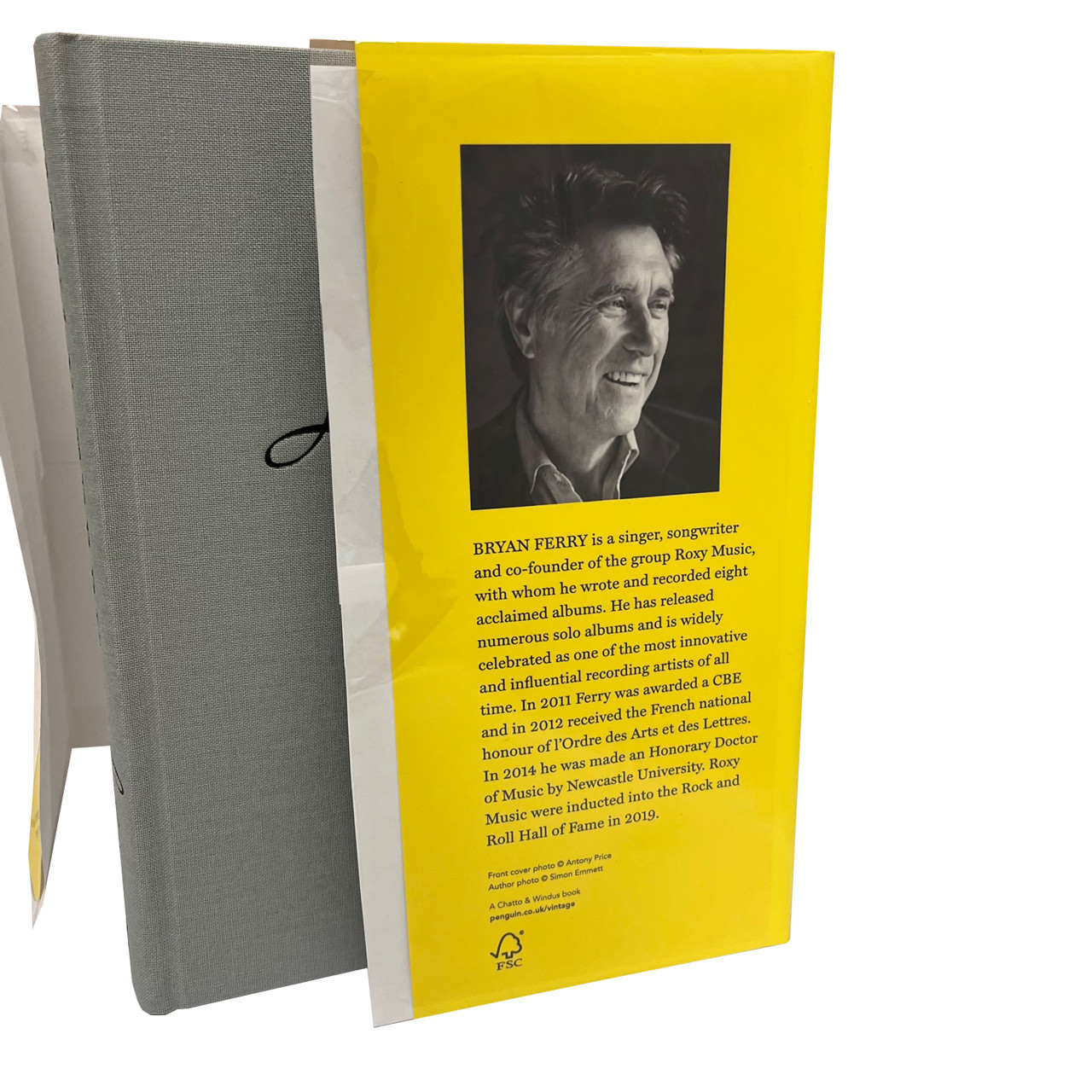 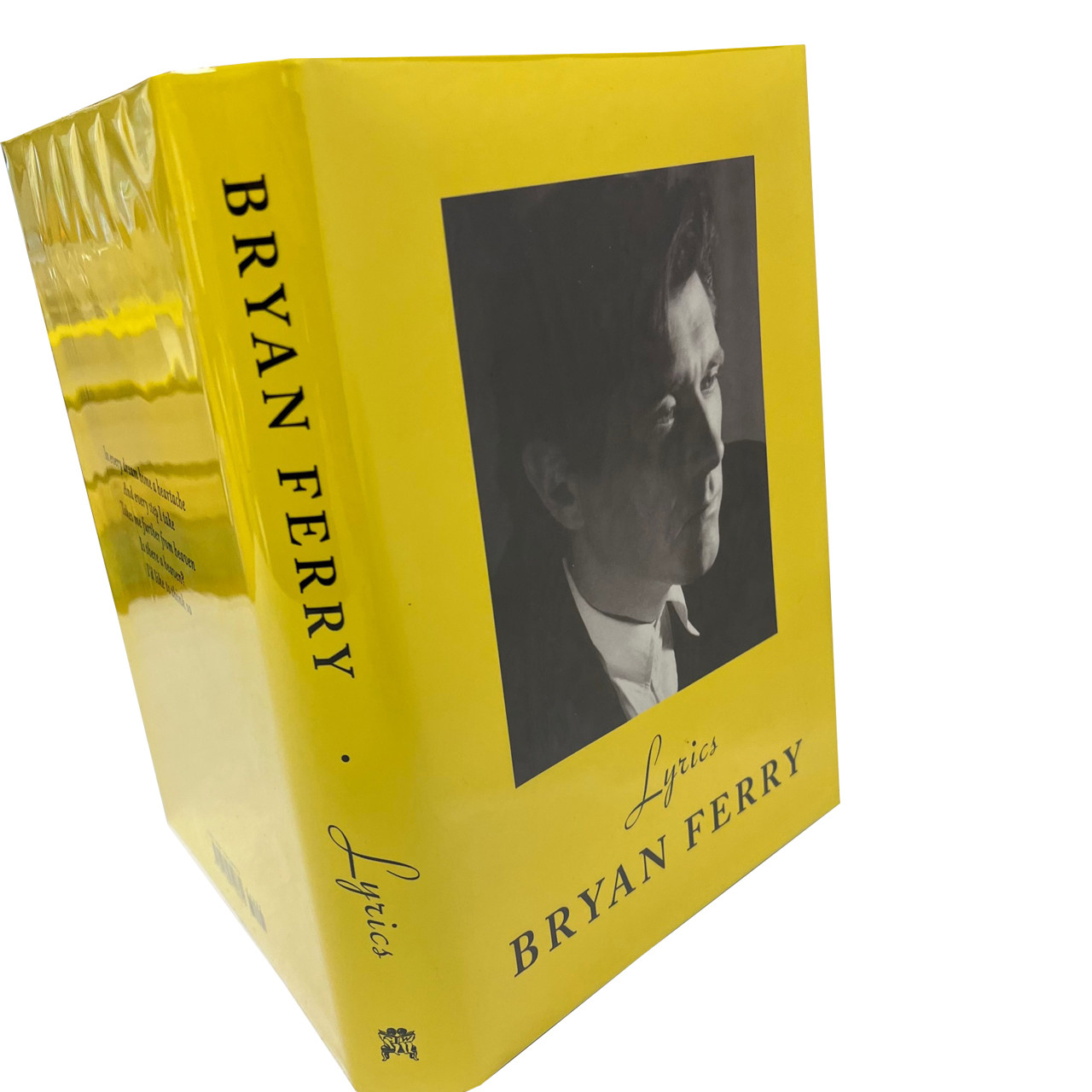 Personally signed by Bryan Ferry directly onto the title page of the book. 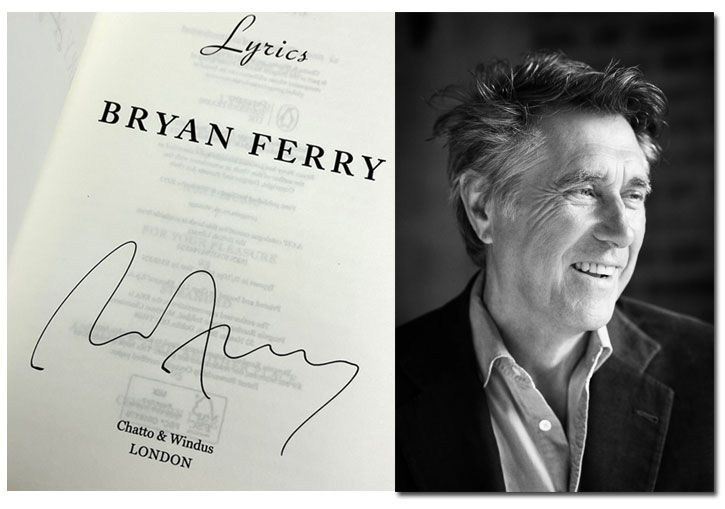 "There is something arresting seeing Ferry's words laid out in black type on the white page... the layout of Lyrics offers an elegant simplicity that allows these lines to breathe" --Record Collector

Bryan Ferry is a singer, songwriter, and co-founder of the group Roxy Music, with whom he wrote and recorded eight acclaimed albums. He has released sixteen solo albums and is widely regarded as one of the most innovative and influential recording artists of all time. In 2011 Ferry was awarded a CBE and accepted the French national honour of Officier de l'Ordre des Arts et des Lettres in 2012. In 2014 he was made an Honorary Doctor of Music by the University of Newcastle. Roxy Music was inducted into the Rock and Roll Hall of Fame in 2019.

Bryan Ferry's evocative lyrics of aspiration and romantic longing, introduced by the author and published on the 50th anniversary of the first Roxy Music album.

Bryan Ferry's work as a singer and songwriter, both as a solo artist and with Roxy Music, is legendary.

Lyrics collects the words written for music across seventeen albums, from the first iconic Roxy album of 1972 via the masterpiece of Avalon to 2014's reflective Avonmore, introduced by the author, and with an insightful essay by James Truman.

All the classic Roxy anthems are here—'Virginia Plain,' 'Do the Strand,' 'Love is the Drug,' 'The Thrill of it All'—songs in which the real and the make-believe blend in a kaleidoscopic mix, shot through with cinematic allure. Also included are the evocative lyrics of romantic longing and lost illusions for which Ferry is rightly revered: 'Slave to Love,' 'Mother of Pearl,' 'More Than This.' As he writes in his preface, 'The low points in life so often produce the most keenly felt and best-loved songs.' And, it might be added, some of the best poetry.

Bryan Ferry CBE (born 26 September 1945) is an English singer and songwriter. His voice has been described as an "elegant, seductive croon". He also established a distinctive image and sartorial style: according to The Independent, Ferry and his contemporary David Bowie influenced a generation with both their music and their appearances.[4] Peter York described Ferry as "an art object" who "should hang in the Tate".

Born to a working-class family, Ferry studied fine art and taught at a secondary school before pursuing a career in music. In 1970 he began to assemble the rock band Roxy Music with a group of friends and acquaintances in London, and took the role of lead singer and main songwriter. The band achieved immediate international success with the release of their eponymous debut album in 1972, containing a rich multitude of sounds, which reflected Ferry's interest in exploring different genres of music. Their second album, For Your Pleasure (1973), further cultivated the band's unique sound and visual image that would establish Ferry as a leading cultural icon over the next decade.

Ferry began a parallel solo career in 1973 by releasing These Foolish Things, which popularized for the first time the concept of a contemporary musician releasing an album covering standard songs and was a drastic departure from his ongoing work with Roxy Music. His second album, Another Time, Another Place (1974), featured as its cover image Ferry posing by a pool in a white dinner jacket and represented one of his most impactful fashion statements. Over the next two years, Roxy Music released a trilogy of albums, Stranded (1973), Country Life (1974) and Siren (1975), which broadened the band's appeal internationally and saw Ferry take greater interest in the role of a live performer, reinventing himself in stage costumes ranging from gaucho to military uniforms. Ferry disbanded Roxy Music following the release of their best-selling album Avalon in 1982 to concentrate on his solo career, releasing further singles such as "Slave to Love" and "Don't Stop the Dance" and the UK no. 1 album Boys and Girls in 1985.

As well as being a prolific songwriter, Ferry has recorded many cover versions, including standards from the Great American Songbook, in albums such as These Foolish Things (1973), Another Time, Another Place (1974), Let's Stick Together (1976), Taxi (1993) and As Time Goes By (1999), as well as Dylanesque (2007), an album of Bob Dylan covers. Including his work with Roxy Music, Ferry has sold over 30 million albums worldwide.[10] In 2019, Ferry was inducted into the Rock and Roll Hall of Fame as a member of Roxy Music. 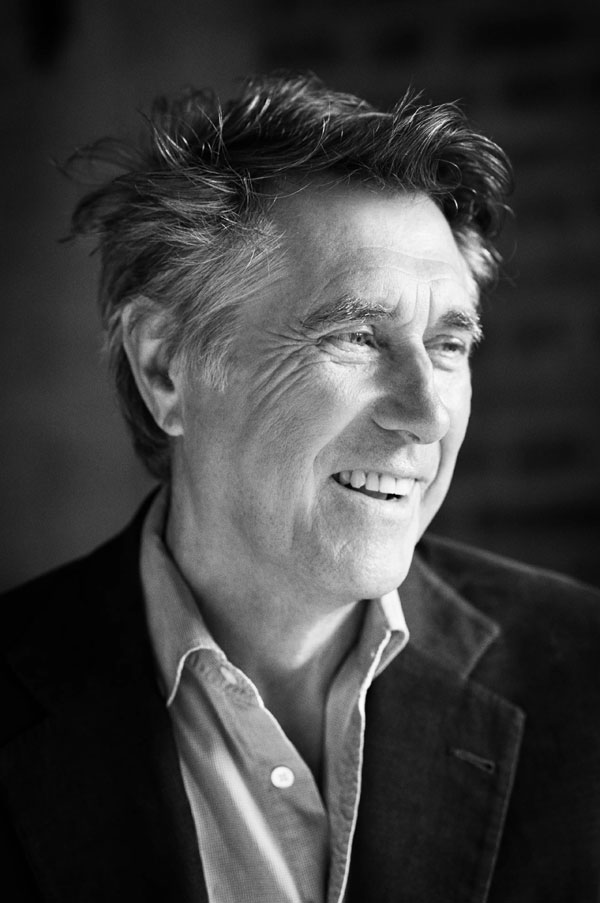 VERY FINE GUARANTEED. Very Fine without any flaws. A wonderful bring clean copy without any marks, writings , or stamps. Clean & straight boards. No attached bookplates or indication of any removed. A well-cared for book, protected from any potential damage. Unread with square and tight spine.