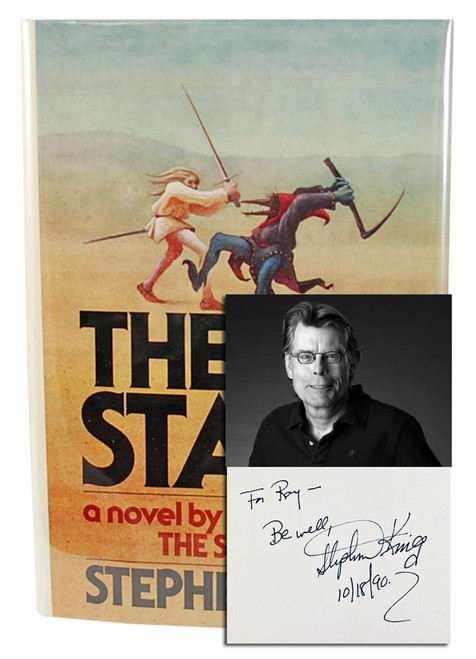 A literary treasure for the discerning collector. If you're looking for a signed first edition of THE STAND, then this is the one! From the legendary horror writer Stephen King, this novel is one of his most popular, a modern classic, and a desirable copy in this superb condition.

This first printing edition of The Stand is an exceptional original copy which has been personally signed by Stephen King with a personal inscription:

In 1978, science fiction writer Spider Robinson wrote a scathing review of The Stand in which he exhorted his readers to grab strangers in bookstores and beg them not to buy it. The Stand is like that. You either love it or hate it, but you can't ignore it. Stephen King's most popular book, according to polls of his fans, is an end-of-the-world scenario: a rapidly mutating flu virus is accidentally released from a U.S. military facility and wipes out 99 and 44/100 percent of the world's population, thus setting the stage for an apocalyptic confrontation between Good and Evil. "I love to burn things up," King says. "It's the werewolf in me, I guess.... The Stand was particularly fulfilling, because there I got a chance to scrub the whole human race, and man, it was fun! ... Much of the compulsive, driven feeling I had while I worked on The Stand came from the vicarious thrill of imagining an entire entrenched social order destroyed in one stroke."

There is much to admire in The Stand: the vivid thumbnail sketches with which King populates a whole landscape with dozens of believable characters; the deep sense of nostalgia for things left behind; the way it subverts our sense of reality by showing us a world we find familiar, then flipping it over to reveal the darkness underneath. Anyone who wants to know, or claims to know, the heart of the American experience needs to read this book.

Hardcover: Fine. Clean and straight boards with no bumped corners. Unread book with square and tight spine without any separation. A wonderful bright clean collector's grade book. Lettering on spine is clear and not faded. No markings, writings, or stamps. No attached bookplates or indication of any removed, and without any torn or ripped pages.

Dust-jacket: A bright and clear NF+ dust-jacket with a hint of edge-wear in one corner as shown. Not price-clipped. Overall, the book exhibits excellent qualities and would make an ideal addition to your Stephen King library. Protected in brand new Mylar covering.