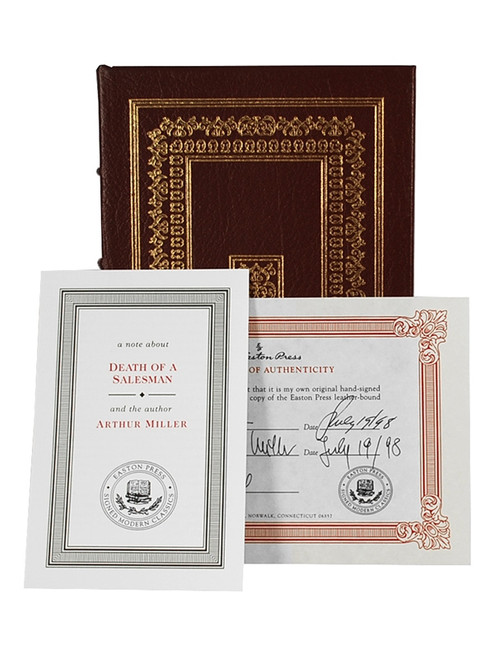 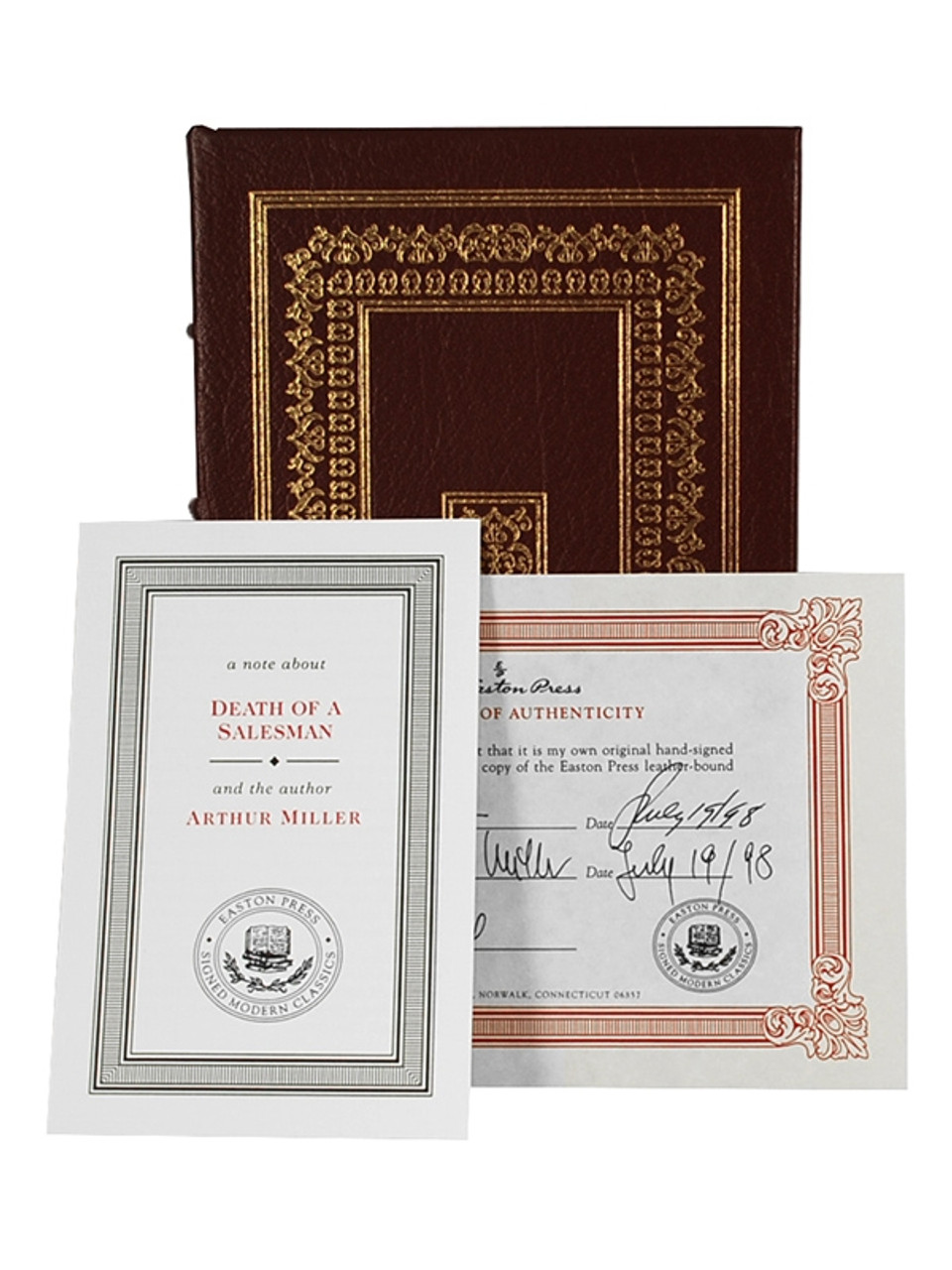 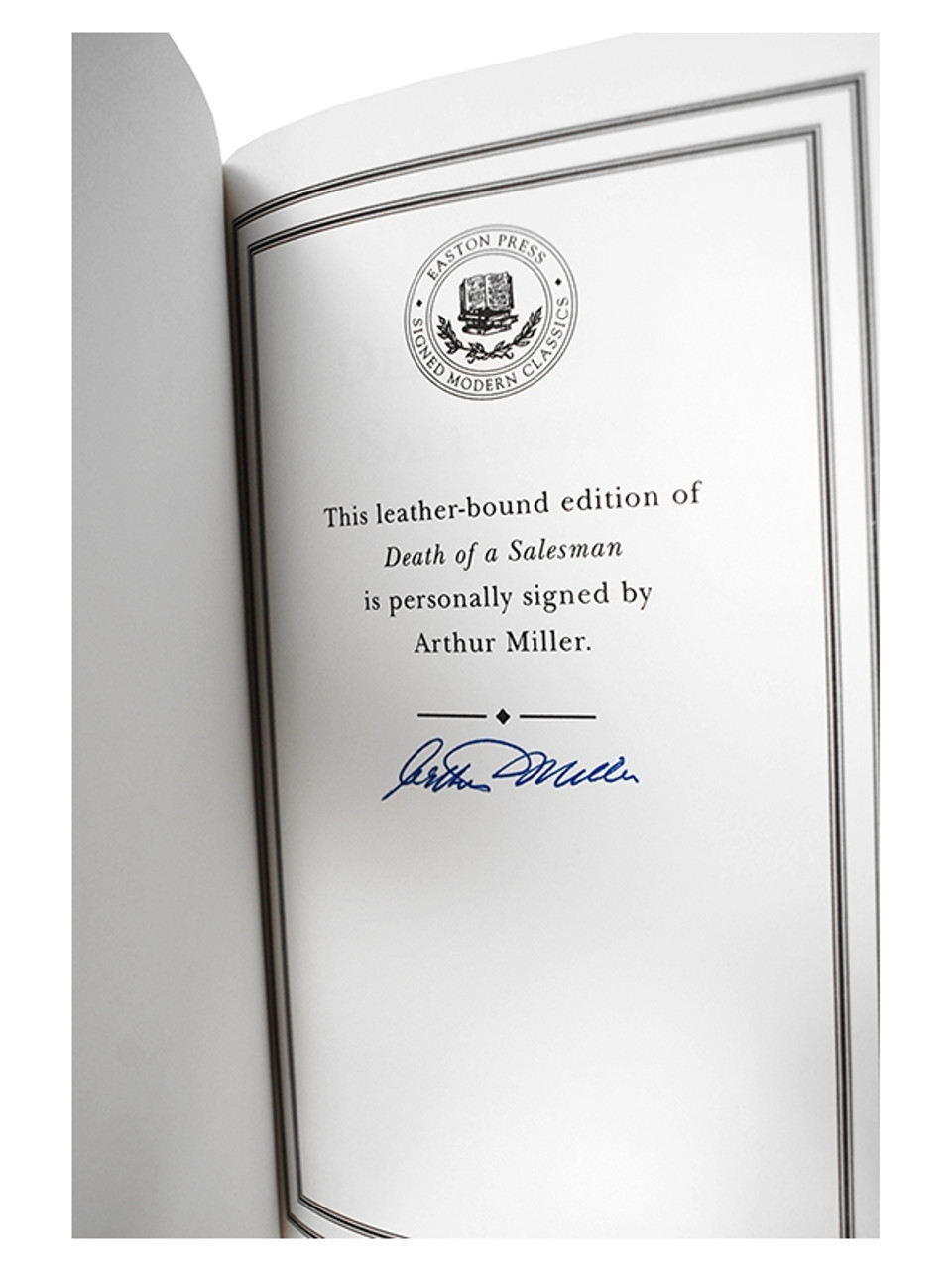 ARTHUR MILLER (1915-2005) is the Pulitzer Prize winning author of Death of a Salesman (1949) and View From the Bridge. He is considered one of the most important playwrights of the 20th century; once married to Marilyn Monroe. Death of a Salesman was the winner of the 1949 PULITZER PRIZE and 2003 TONY AWARD - A classic play of 20th century. This leather bound collector's edition has been personally signed by Arthur Miller. Death of a Salesman is a 1949 play by American playwright Arthur Miller and is considered a classic of American theater. The play premiered on Broadway on February 10, 1949 at the Morosco Theatre where it ran for 742 performances, directed by Elia Kazan with Lee J. Cobb starring in the leading role. Viewed by many as a caustic attack on the American Dream, Death of a Salesman made both Arthur Miller and the character Willy Loman household names. The play raises a counterexample to Aristotle's characterization of tragedy as the downfall of a great man, whether through (depending on the translator) a flaw in his character or a mistake he has squandered.

"Death of a Salesman" Awards

Arthur Asher Miller (October 17, 1915 - February 10, 2005) was an American playwright and essayist. He was a prominent figure in American literature and cinema for over 61 years, writing a wide variety of plays, including celebrated plays such as The Crucible, A View from the Bridge, All My Sons, and Death of a Salesman, which are still studied and performed worldwide. Miller was often in the public eye, most famously for refusing to give evidence against others to the House Un-American Activities Committee, being the recipient of the Pulitzer Prize for Drama among countless other awards, and for his marriage to Marilyn Monroe. Miller is considered by audiences and scholars as one of America's greatest playwrights, and his plays are lauded throughout the world.
VERY FINE GUARANTEED. A wonderful bright clean copy without any marks, bumped corners, etc. The condition is of the highest quality.