Personally signed by Garry Kasparov directly onto a limitation page.


Condition: As New - Still sealed in the original shrink-wrap from Easton Press. The condition is of the highest quality.

Easton Press. Norwalk, CT. 2007. Garry Kasparov "How Life Imitates Chess: Making The Right Moves, From The Board To The Boardroom". Signed Limited First Edition. Limited to only 1,350 signed and numbered copies. Full genuine leather. Certificate of Authenticity from Easton Press guarantees the signature. Sealed without any flaws.

"One of the most formidable brains of our era, fast-talking, exuberant, indigent one moment and laughing sardonically the next, Kasparov clearly relishes the fight."-Washington Post

Garry Kasparov was the highest-rated chess player in the world for over twenty years and is widely considered the greatest player that ever lived. In How Life Imitates Chess Kasparov distills the lessons he learned over a lifetime as a Grandmaster to offer a primer on successful decision-making: how to evaluate opportunities, anticipate the future, devise winning strategies. He relates in a lively, original way all the fundamentals, from the nuts and bolts of strategy, evaluation, and preparation to the subtler, more human arts of developing a personal style and using memory, intuition, imagination and even fantasy. Kasparov takes us through the great matches of his career, including legendary duels against both man (Grandmaster Anatoly Karpov) and machine (IBM chess supercomputer Deep Blue), enhancing the lessons of his many experiences with examples from politics, literature, sports and military history.

With candor, wisdom, and humor, Kasparov recounts his victories and his blunders, both from his years as a world-class competitor as well as his new life as a political leader in Russia. An inspiring book that combines unique strategic insight with personal memoir, How Life Imitates Chess is a glimpse inside the mind of one of today's greatest and most innovative thinkers.

Kasparov became the youngest ever World Chess Champion in 1985. He held the official FIDE world title until 1993, when a dispute with FIDE led him to set up a rival organization, the Professional Chess Association. He continued to hold the "Classical" World Chess Championship until his defeat by Vladimir Kramnik in 2000. He is also widely known for being the first world chess champion to lose a match to a computer, when he lost to Deep Blue in 1997.

Kasparov's ratings achievements include being rated world #1 according to Elo ratingholds records for consecutive tournament victories and Chess Oscars. almost continuously from 1986 until his retirement in 2005 and holding the all-time highest rating of 2851. He also

Kasparov announced his retirement from professional chess on March 10, 2005, to devote his time to politics and writing. He formed the United Civil Front movement, and joined as a member of The Other Russia, a coalition opposing the administration of Vladimir Putin. He was a candidate for the 2008 Russian presidential race, but later withdrew. Widely regarded in the West as a symbol of opposition to Putin, Kasparov's support in Russia is low. 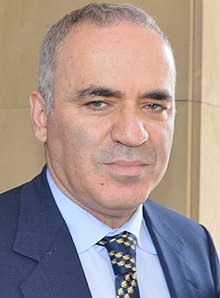 VERY FINE GUARANTEED. Sealed without any flaws. As New. A wonderful bright clean copy without any marks, writings , or stamps. Clean & straight boards. No attached bookplates or indication of any removed. A well-cared for book, protected from any potential damage. Unread with square and tight spine. Photos of actual volume.