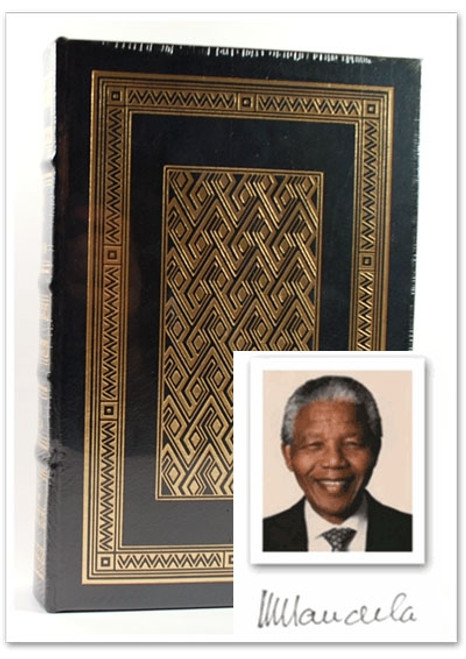 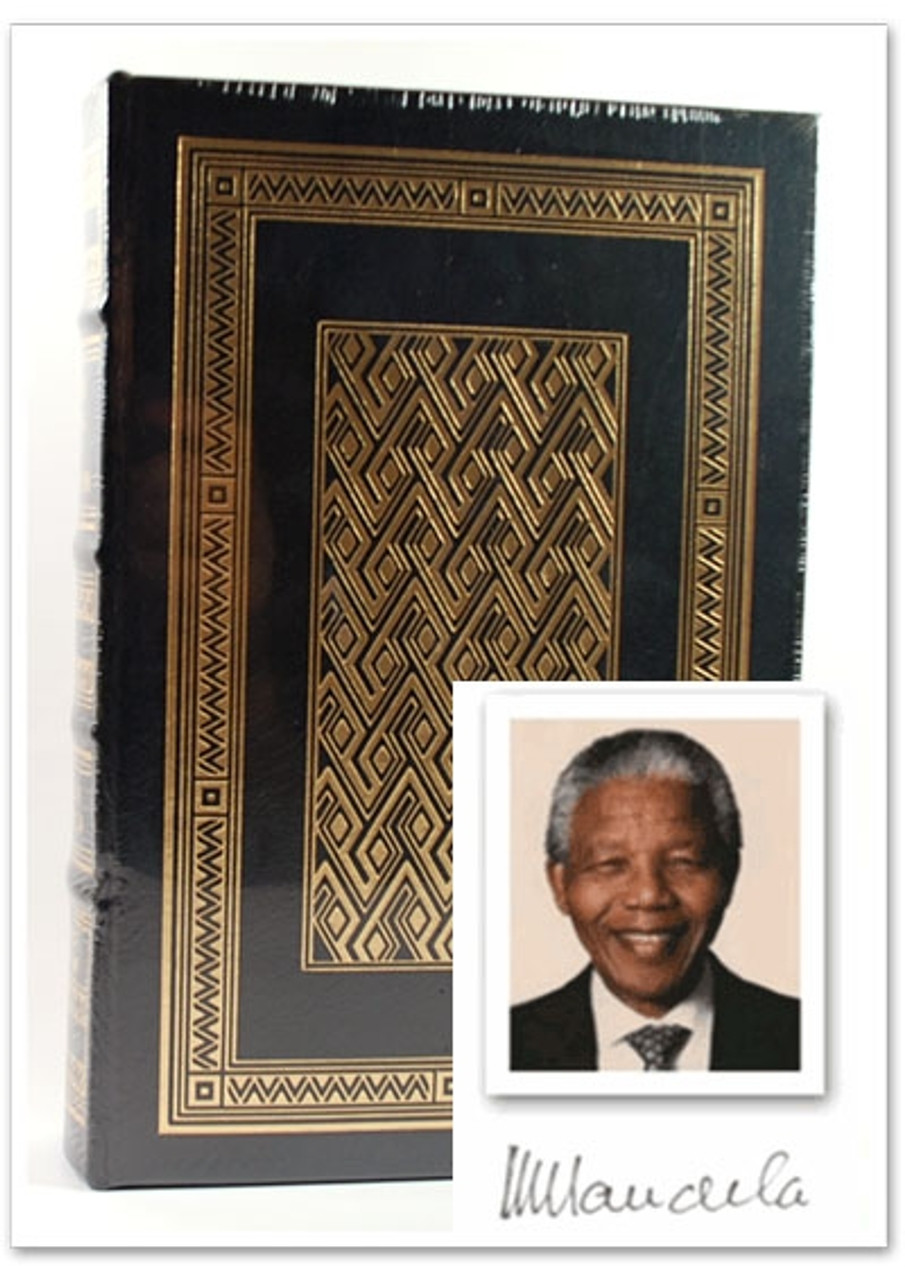 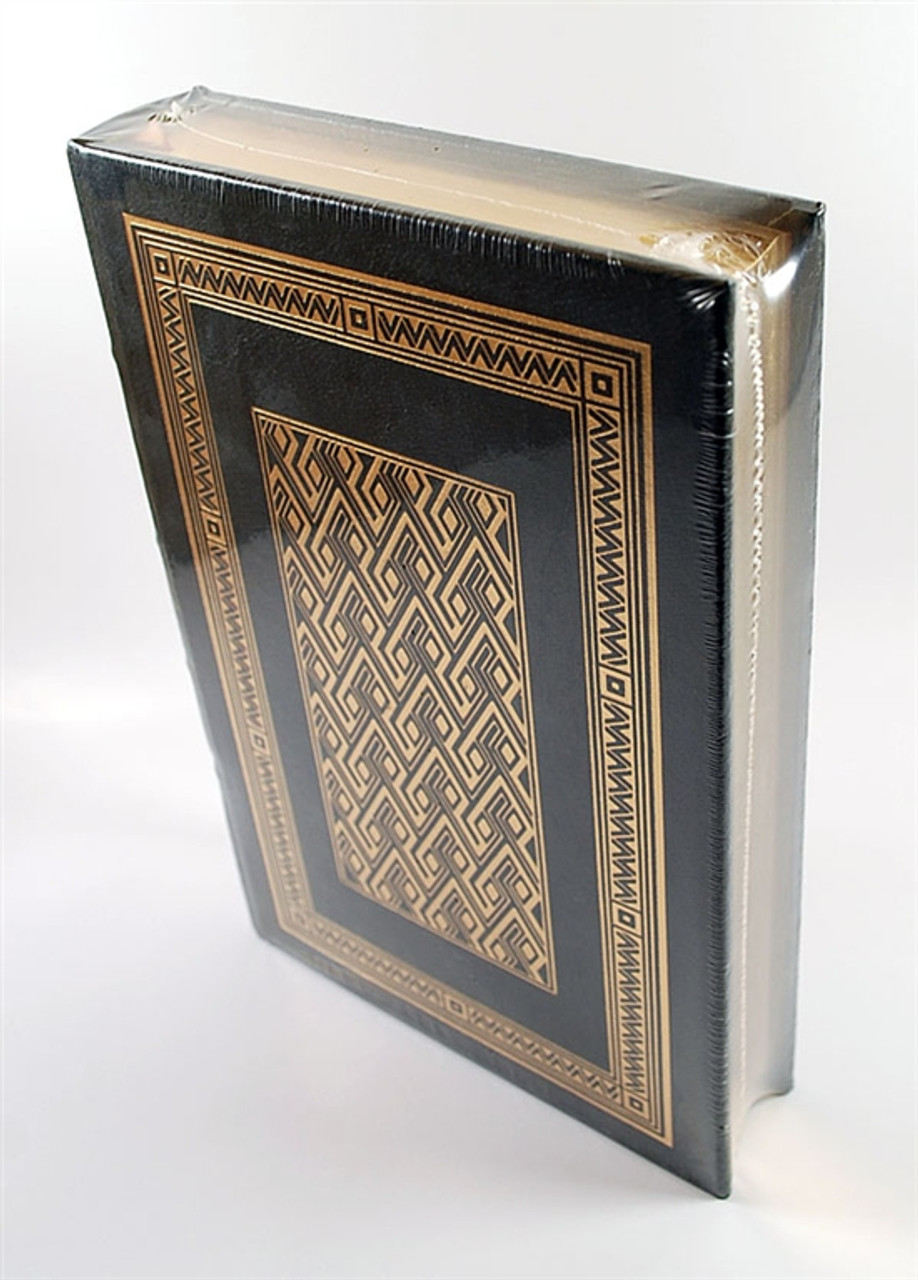 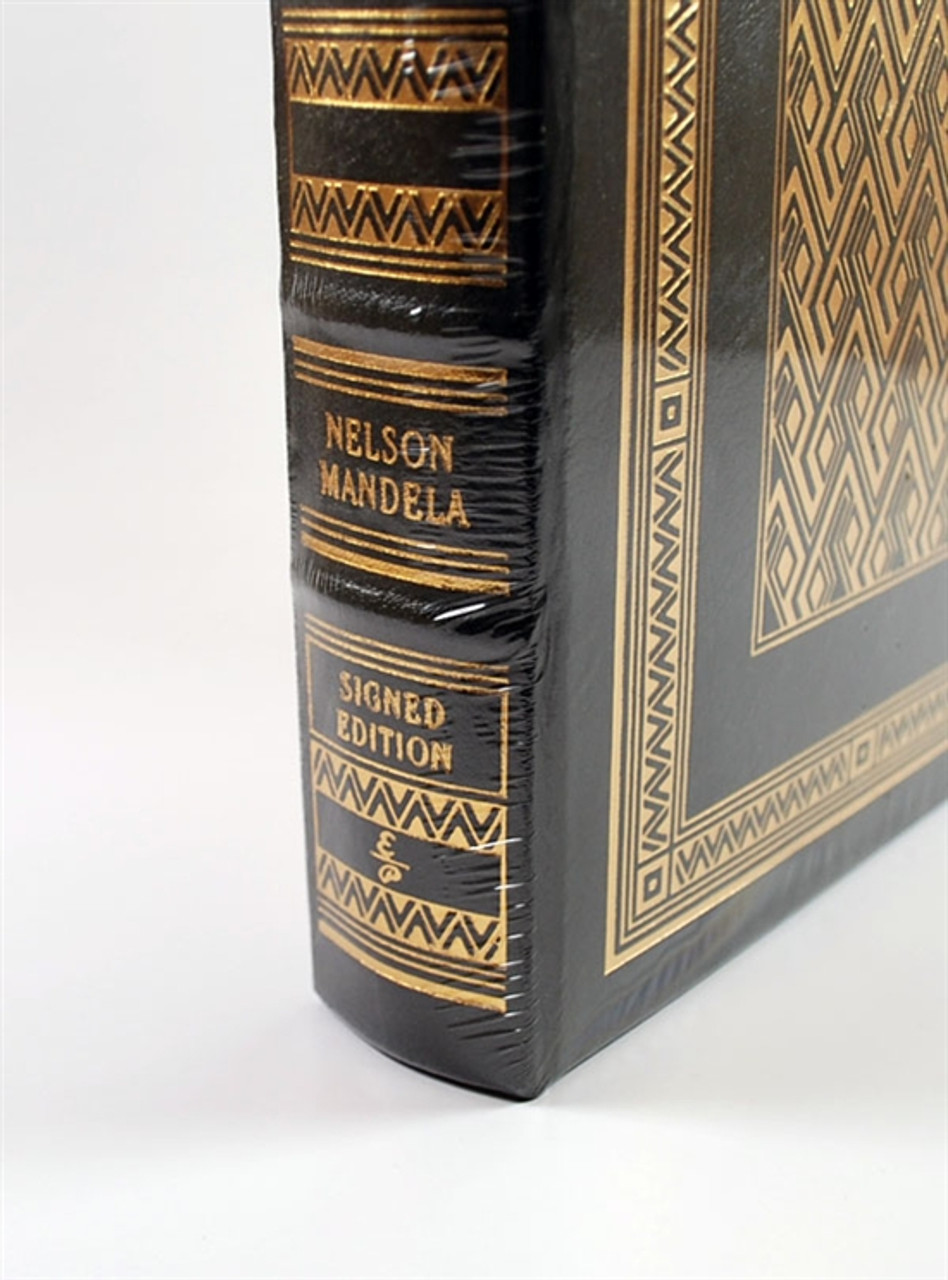 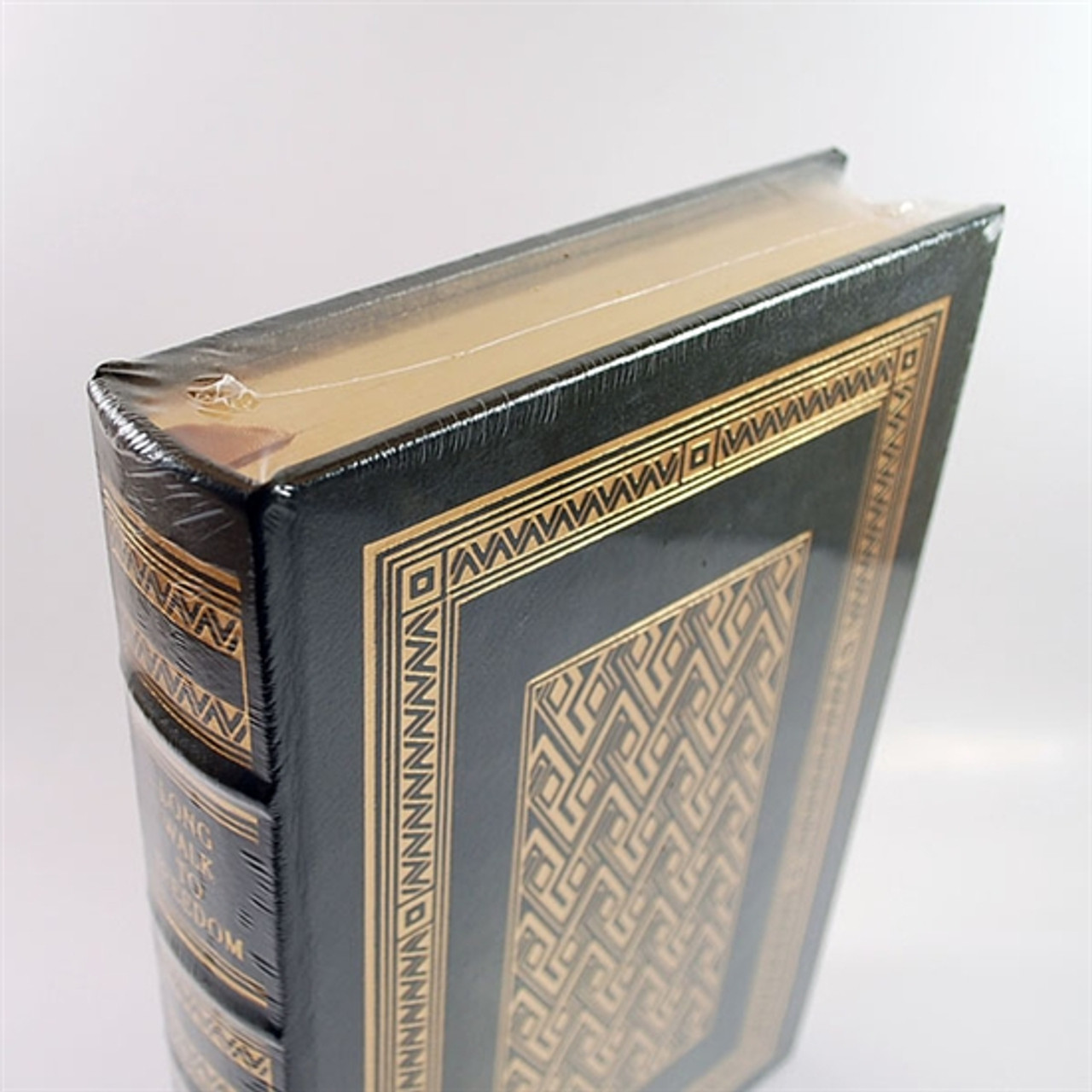 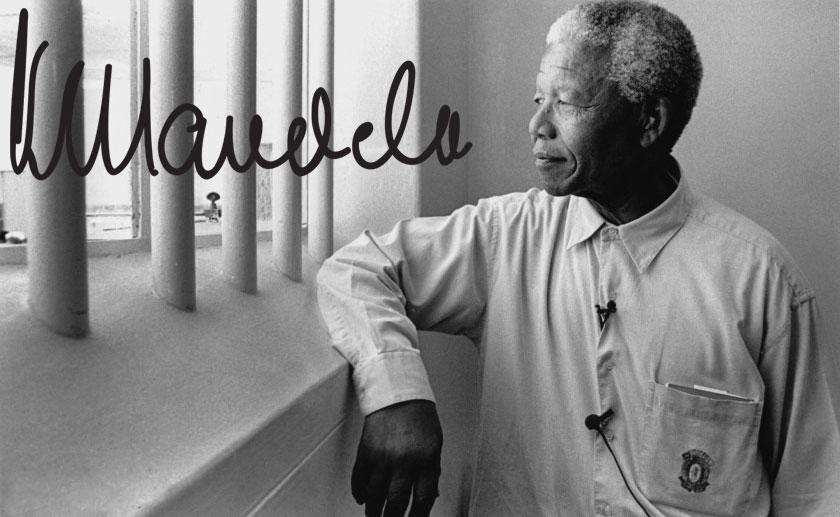 A rare presidential autograph for the advanced collector.

Only 1,000 have been printed in this special signed limited edition. This leather bound heirloom is one of the most valuable Easton Press editions printed to date. A beautiful matching clam-case is included to protect your investment.

The Crown Jewel of all Easton Press signed limited edition collectible books. A truly amazing collector's item. A luxurious leather-bound heirloom that tells the incredible story of one of the most noble political figures in world history.

Easton Press, Norwalk, CT. 2000. Signed Collector's edition of Nelson Mandela's autobiography, "Long Walk to Freedom". Dark olive green leather binding. This volume has been personally signed by Nelson Mandela and was limited to only 1,000 copies. Mandela, the former president of South Africa, is one of the towering figures of our time, and copies of this signed edition are exceedingly rare. Bound in beautiful genuine leather. Includes Certificate of Authenticity from Easton Press along with Collector's Notes.

The Autobiography of Nelson Mandela, the Global Icon

That Has Inspired Generations

Nelson Mandela is the winner of the Nobel Peace Prize and the first democratically elected president of South Africa. Own one of the most valuable Easton Press signed editions. This leather-bound heirloom edition has been hand signed by Nelson Mandela directly on a special title page.

This edition will arrive in a beautiful matching leather bound clam shell box. It is hand made and specifically designed to house the this Easton Press Signed Limited Edition of Nelson Mandela's "Long Walk to Freedom". Please allow one to two weeks for the case.

This clam shell box is made from French Goatskin and Brazilian hand-marbled paper and perfectly matches the dark green leather of the book. 3/4 Leather bound with rounded spine. A lovely case to protect your investment. Limited Edition clam shell case with the author's name, book title, and "Signed Limited Edition" tool embossed on the spine. Gilt stamped titles to the spine. As New condition. This case was designed so that the book fits inside properly. Overall dimensions of the case: 11" x 8" x 2"

Additional Book Information
Winner of the Nobel Peace Prize and the first democratically elected president of South Africa, Mandela began his autobiography during the course of his 27 years in prison.

The famously taciturn South African president reveals much of himself in Long Walk to Freedom. A good deal of this autobiography was written secretly while Mandela was imprisoned for 27 years on Robben Island by South Africa's apartheid regime. Among the book's interesting revelations is Mandela's ambivalence toward his lifetime of devotion to public works. It cost him two marriages and kept him distant from a family life he might otherwise have cherished. Long Walk to Freedom also discloses a strong and generous spirit that refused to be broken under the most trying circumstances--a spirit in which just about everybody can find something to admire.

This is an articulate, moving account of Mandela's life from his "country childhood" following his birth on July 18, 1918 to his inauguration as president of South Africa on May 10, 1994. Mandela traces the growth of his understanding of the oppression of the blacks of South Africa; his conviction that there was no alternative to armed struggle; his developing belief that all people, black and white, must be free for true freedom; and the effect that his commitment to overthrowing apartheid had on his family, who "paid a terrible price." Over a third of Mandela's memoir tells of his 27 years in prison, an account that could stand alone as a prison narrative. He ends his book with the conclusion that his "long walk" for freedom has just begun: "For to be free is not merely to cast off one's chains, but to live in a way that respects and enhances the freedom of others." On 31 March 2004, Sandton Square was renamed Nelson Mandela Square, after a 6-metre statue of Nelson Mandela was installed on the square to honour the famous South African statesman.

On 29 August 2007, a statue of Nelson Mandela was unveiled at Parliament Square in London by Richard Attenborough, Ken Livingstone, Wendy Woods, and Gordon Brown. The campaign to erect the statue was started in 2000 by the late Donald Woods, a South African journalist driven into exile because of his anti-apartheid activities. Mandela stated that it represented not just him, but all those who have resisted oppression, especially those in South Africa. He also said, "The history of the struggle in South Africa is rich with the stories of heroes and heroines, some of them leaders, some of them followers. All of them deserve to be remembered."

Nelson Rolihlahla Mandela (born 18 July 1918) was the first President of South Africa to be elected in fully-representative democratic elections.

Before his presidency, Mandela was an anti-apartheid activist and leader of the African National Congress (ANC), and was sentenced to life imprisonment for sabotage after he went underground and began the ANC's armed struggle. He saw his wife only three times over the next 27 years.

Through his 27 years in prison, much of it spent in a cell on Robben Island, Mandela became the most widely known figure in the struggle against apartheid. Among opponents of apartheid in South Africa and internationally, he became a cultural icon of freedom and equality.

The apartheid government and nations sympathetic to it condemned him and the ANC as communists and terrorists, and he became a figure of hatred among many South African whites, supporters of apartheid, and opponents of the ANC.

Following his release from prison in 1990, his switch to a policy of reconciliation and negotiation helped lead the transition to multi-racial democracy in South Africa. Since the end of apartheid, he has been widely praised, even among white South Africans and former opponents.

Mandela has received more than one hundred awards over four decades, most notably the Nobel Peace Prize in 1993. He is currently a celebrated elder statesman who continues to voice his opinion on topical issues. In South Africa he is often known as Madiba, an honorary title adopted by elders of Mandela's clan. The title has come to be synonymous with Nelson Mandela.

VERY FINE GUARANTEED. As New (Sealed). The condition is of the highest quality without any discernible flaws. No bumped corners, and free of any marks, writing, or stamps. Unread and mint.