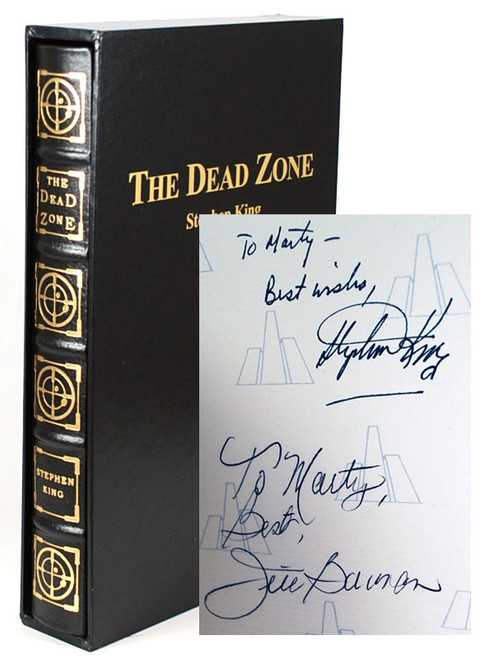 
Personally Signed by Stephen King Along With The Illustrator Jill Bauman

Stephen King "The Dead Zone". The Easton Press, Norwalk CT. 1993. First Edition. Black Leather Collector's Edition. A rare find. This is the more collectible 1993 first printing as shown by the spine design and not the later 2004 re-issue. Full genuine black leather hardcover. 426 pps. A "Collector's Edition" illustrated by Jill Bauman. This volume also includes a custom slipcase, which has been especially designed for this edition. From the Masterpieces of Science Fiction series.


About The Dead Zone

A wonderful bright clean copy free of any markings, writings, or stamps. Sharp corners that have not been bumped. Tight binding. Most likely an unread book. No bookplates attached or indication of any removed.

Personally signed by Peter Straub. A beautiful collection of very fine books to display in your Peter Straub library. Borderlands Press Grantham, NH 2004. Peter Straub "In the Night Room" and...