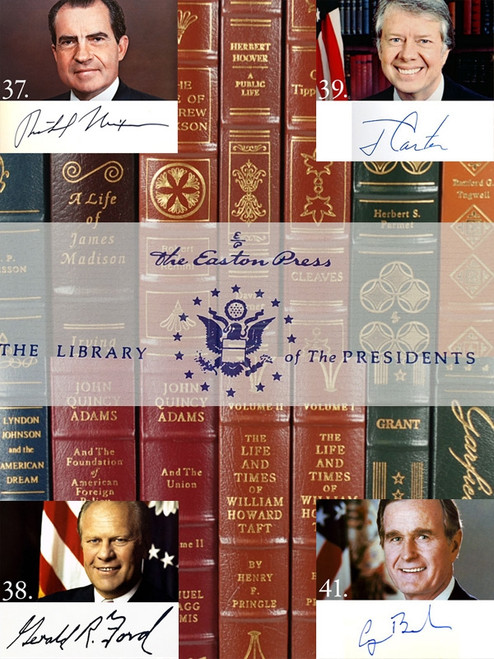 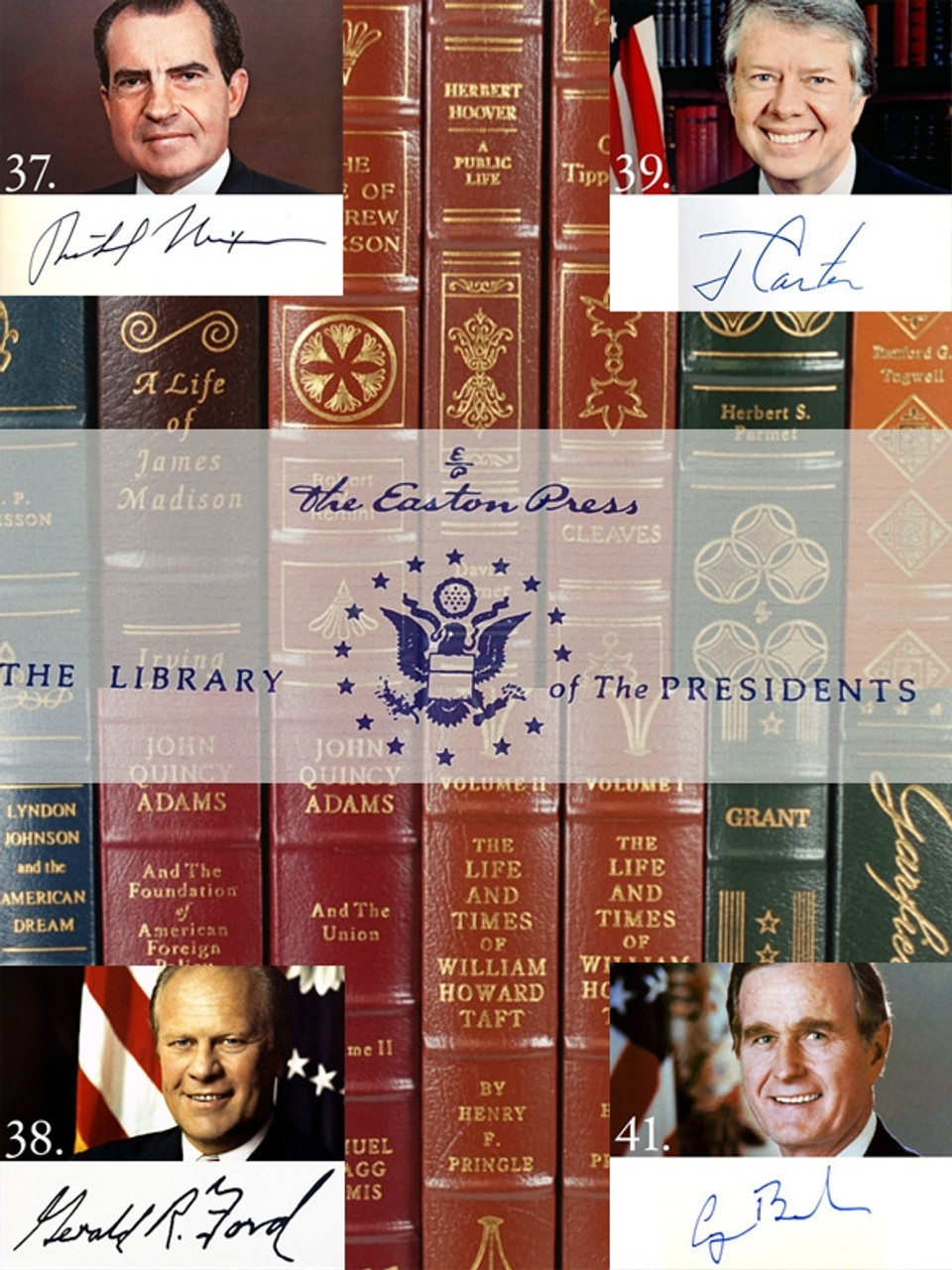 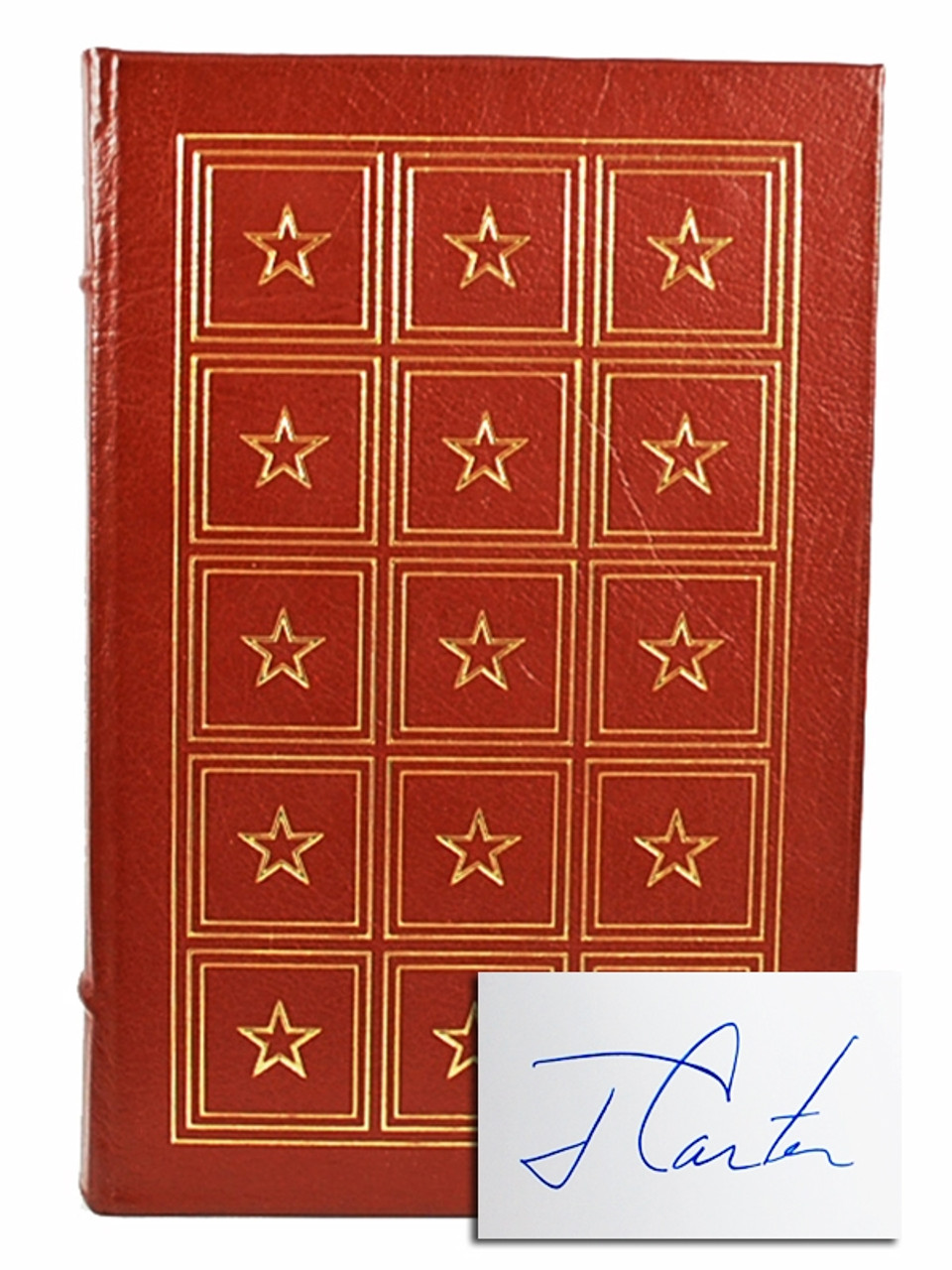 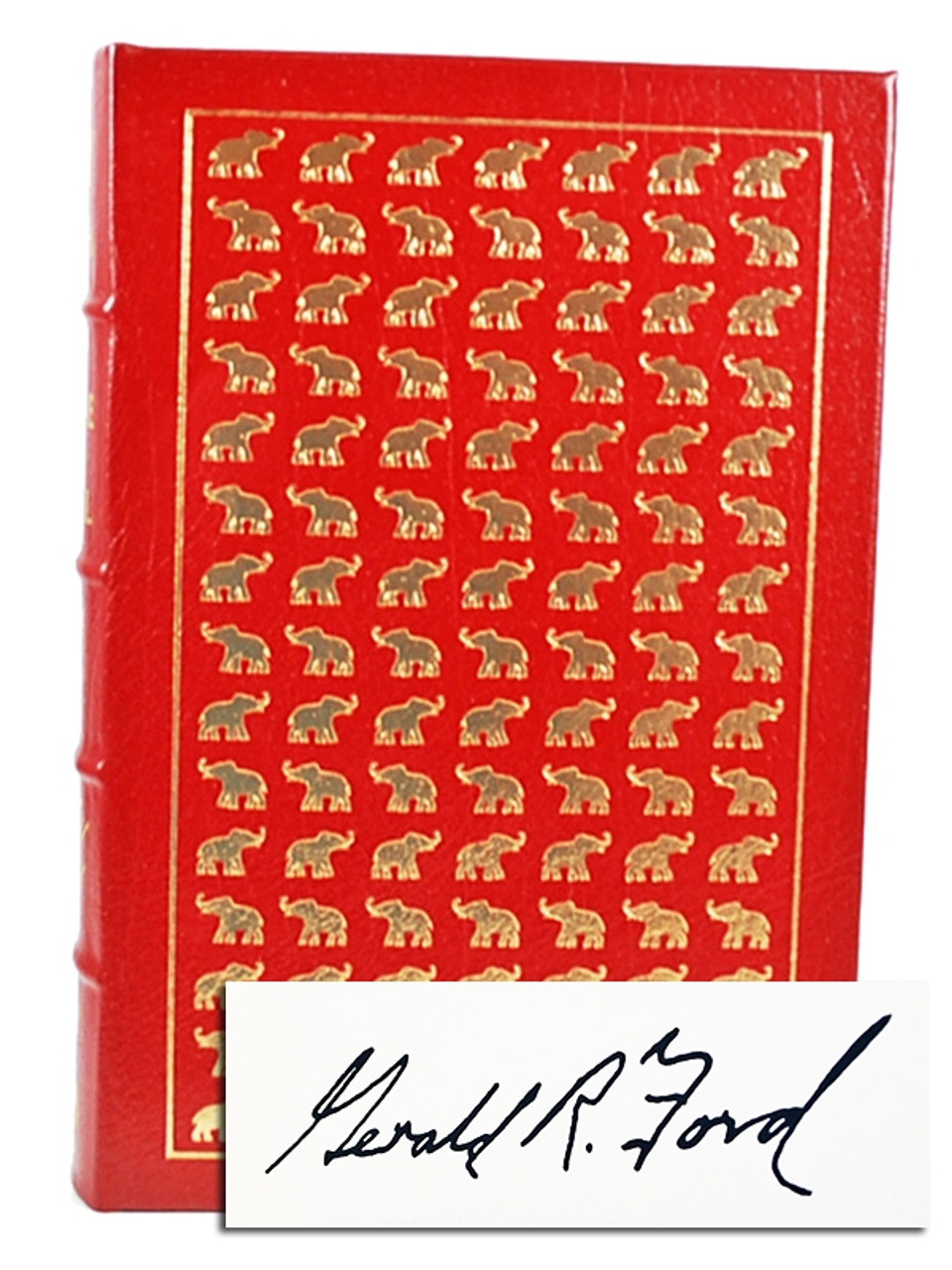 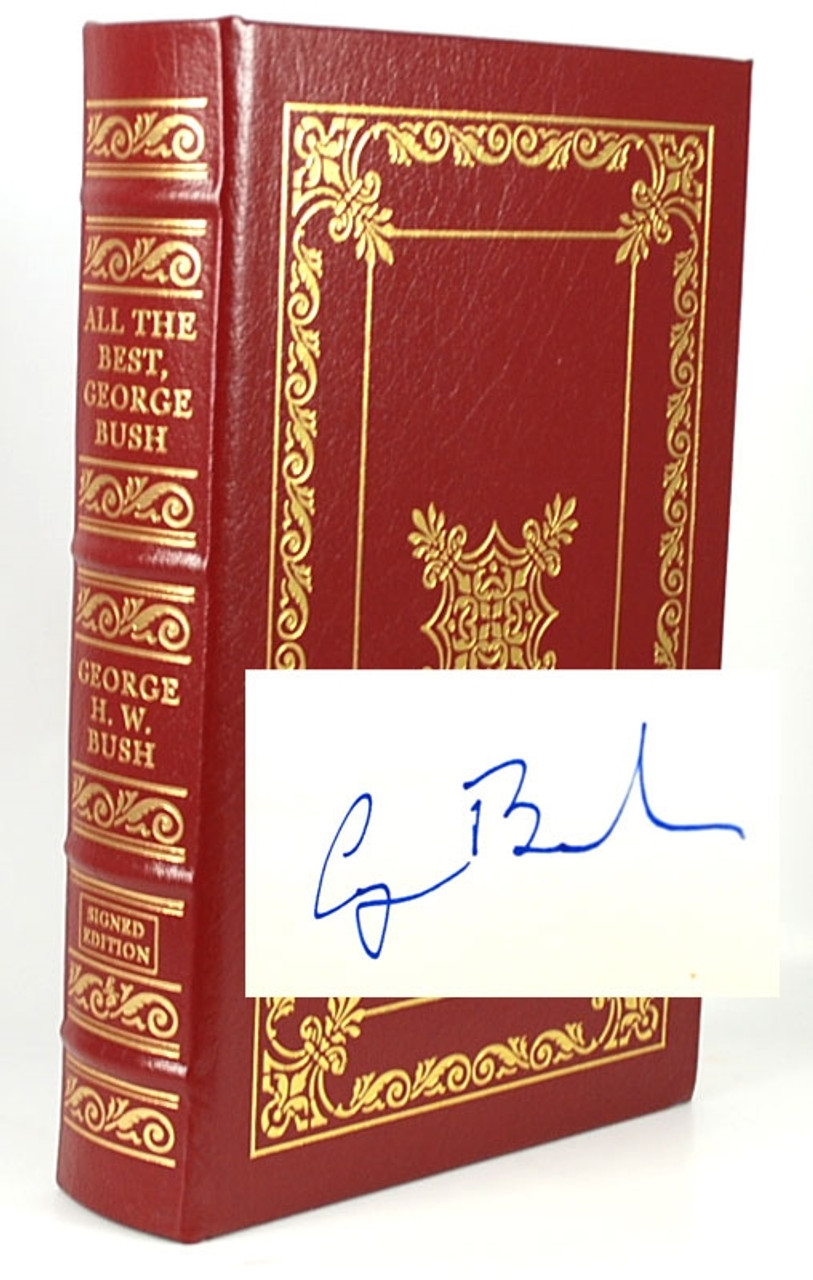 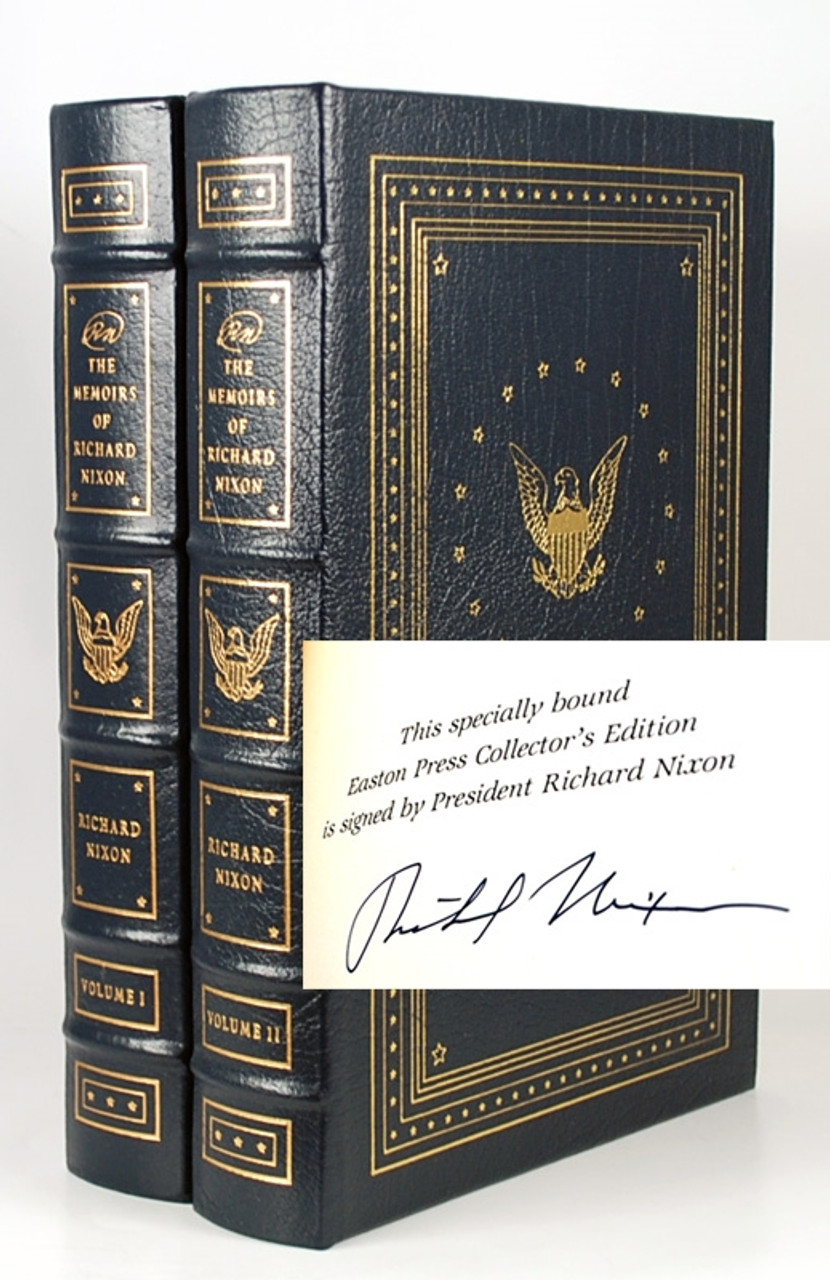 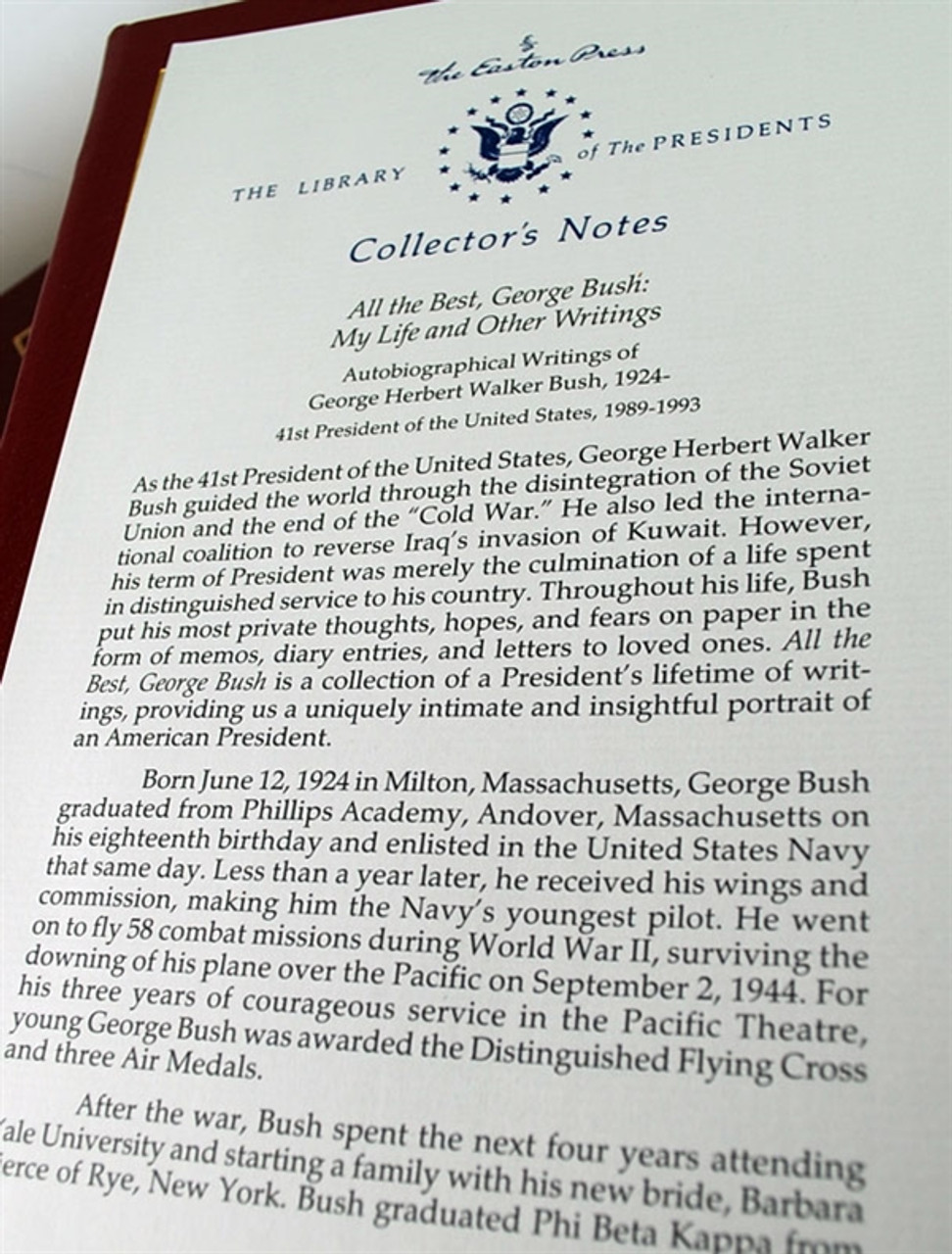 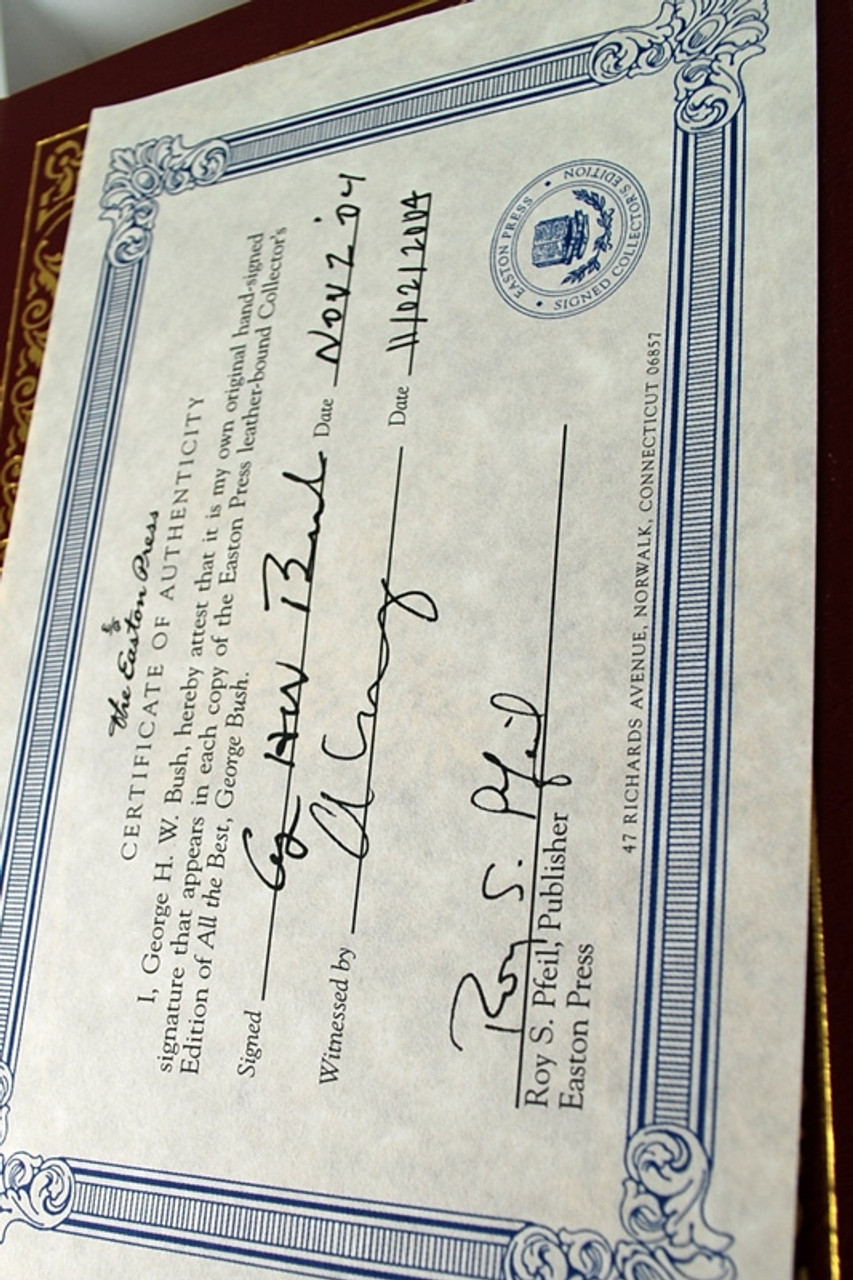 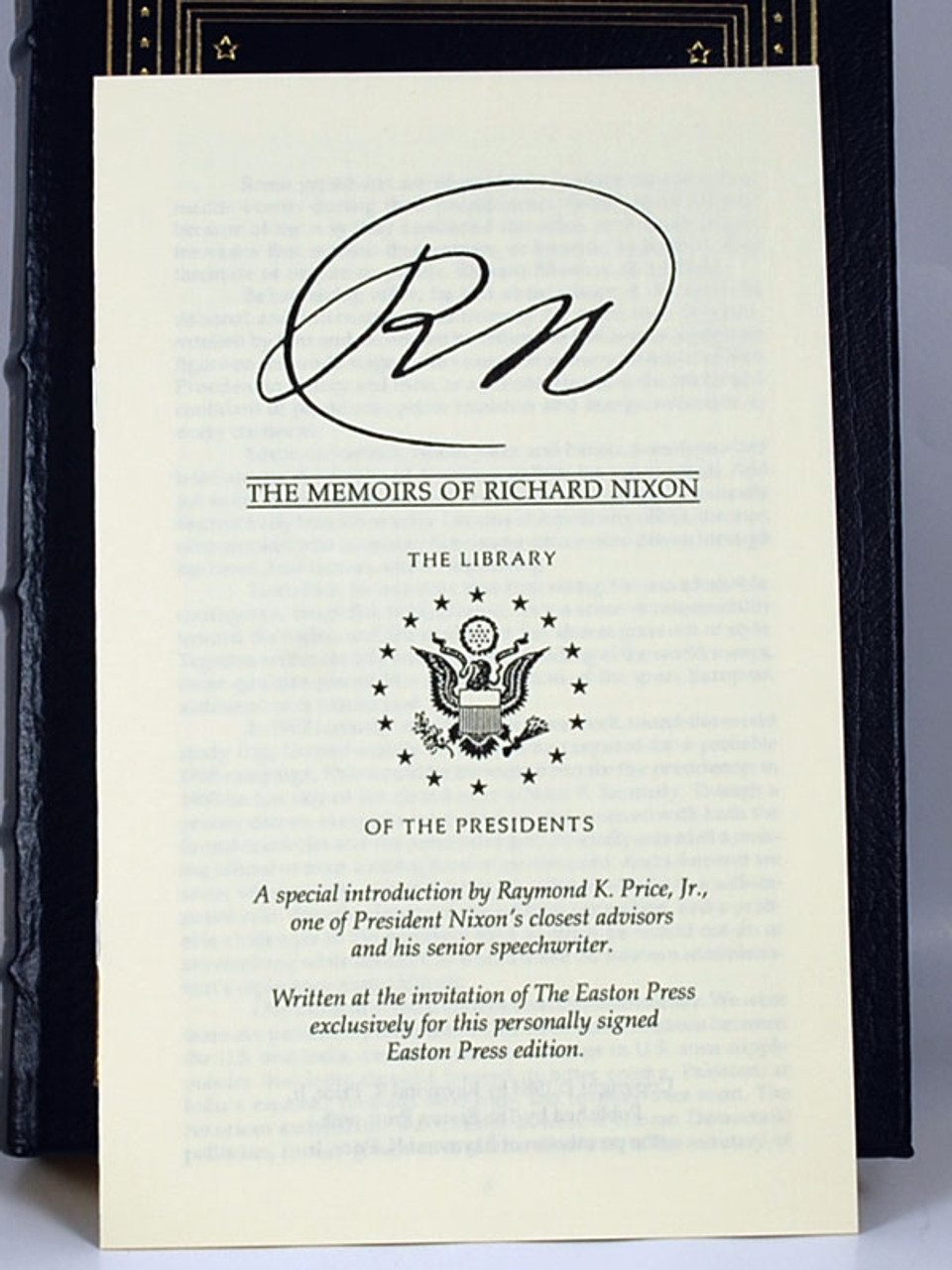 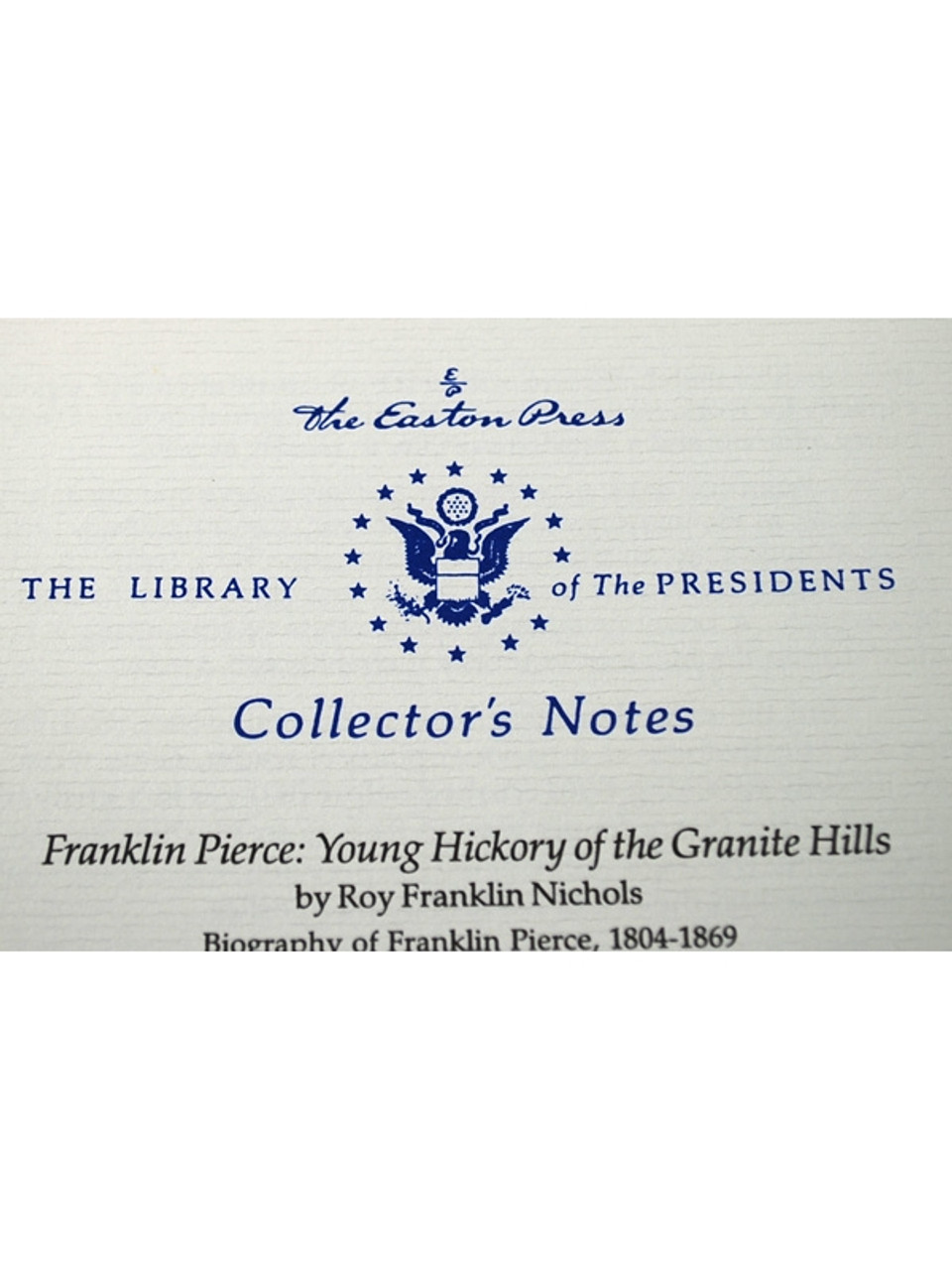 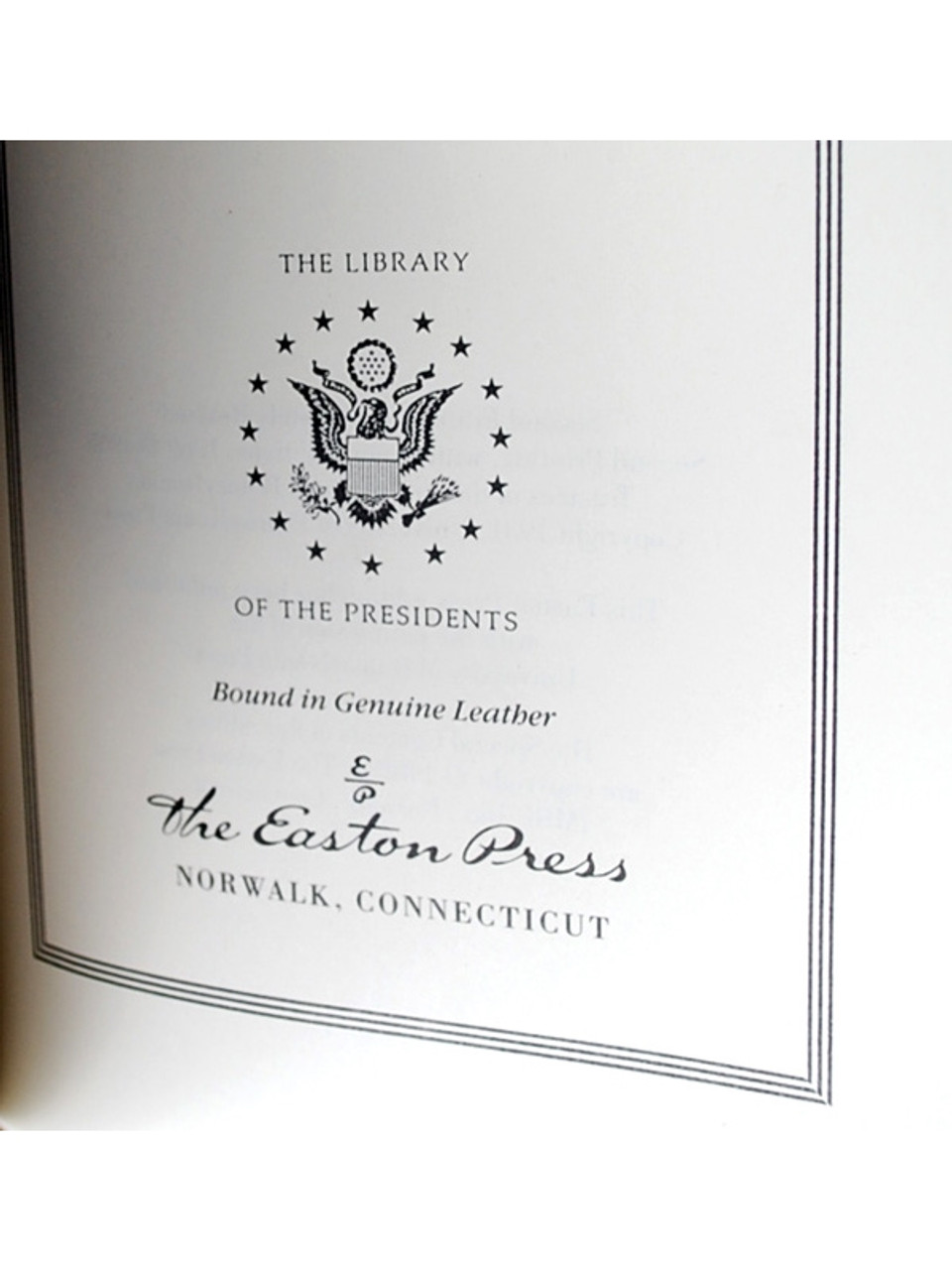 A Unique Opportunity To Own The Entire Library of the Presidents, Complete in 82 Very Fine Volumes

The Easton Press, Norwalk, CT. A complete set of 82 volumes. Each volume in this series is from the Library of the Presidents and is copyrighted 1983 through 1994. Four of the volumes have been personally signed by a president. A complete limited edition collector's set. All eighty-two volumes are in very fine condition, with the majority of the set still sealed in the original shrink-wrap.

Each edition features full genuine leather with covered boards, raised bands on the spines, gilt text and decorations stamped in the compartments, and with gilt tool work on both the front and rear boards. The end papers are silk with matching silk placement ribbons sewn-in at the head of the spine. All three edges of the text blocks are gilt. Sizes vary from small octavo to quarto.


The following four volumes have been personally signed by a president:

"The Memoirs of Richard Nixon" - Easton Press, Norwalk CT. Full genuine leather. A two volume matching set. One volume has been signed by president Richard Nixon directly onto a special title page. Includes the original pamphlet as issued by the publisher.

"A Time To Heal: The Autobiography of Gerald Ford" - Easton Press, Norwalk CT. Full genuine leather. This special limited edition has been signed by president Gerald Ford directly onto the title page. Includes the original collector's notes as issued by the publisher.

Gerald Rudolph Ford Jr. (born Leslie Lynch King Jr.; July 14, 1913 – December 26, 2006) was an American politician who served as the 38th President of the United States from 1974 to 1977. Prior to this he was the 40th Vice President of the United States, serving from 1973 until President Richard Nixon's resignation in 1974. He was the first person appointed to the vice presidency under the terms of the 25th Amendment, following the resignation of Vice President Spiro Agnew on October 10, 1973.

"Keeping Faith: Memoirs of a President" - Easton Press, Norwalk CT. Full genuine leather. This special limited edition has been signed by president Jimmy Carter directly onto the title page. Includes the original collector's notes as issued by the publisher.

"All The Best, George Bush" Easton Press, Norwalk CT. Full genuine leather. This special limited edition has been signed by president George HW Bush directly onto the title page. Includes the original collector's notes and COA, Certificate of Authenticity, as issued by the publisher.

Condition: All 82 volumes are SEALED. As New , unread with square and tight spines without any marks, scratches, blemishes to the gilded page edges 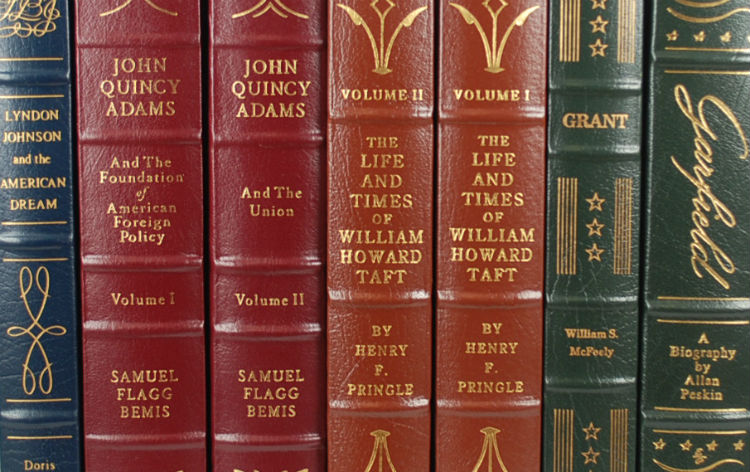 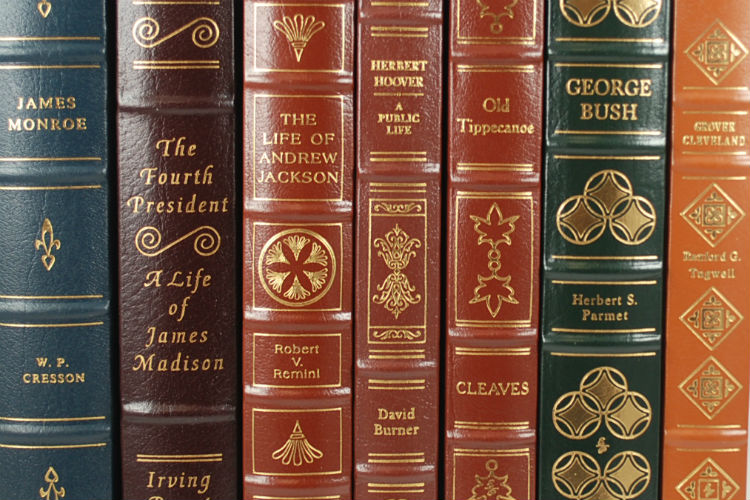 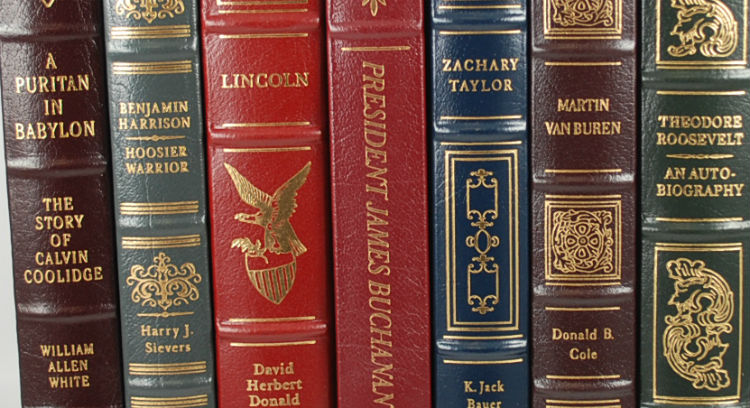 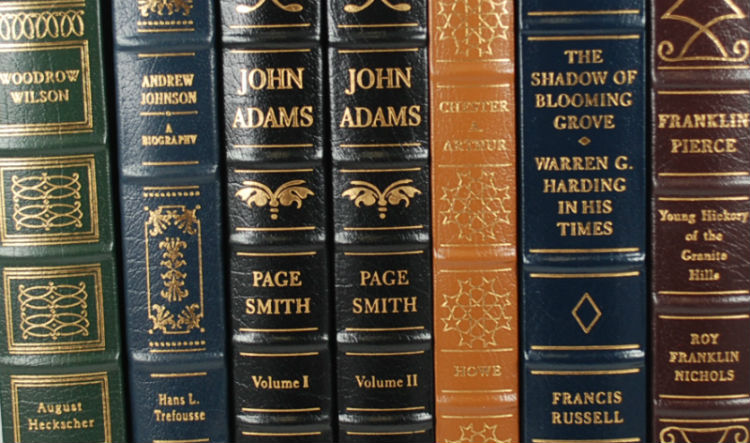 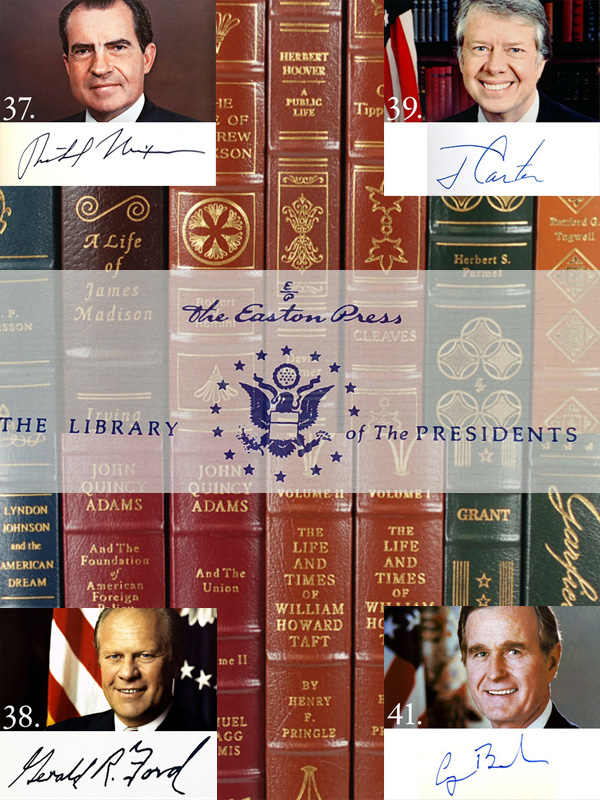 The autographs are not facsimiles, stamps, or auto-pens. learn more
VERY FINE GUARANTEED. The majority of the collection is still sealed. Square and tight spines. Unread and new. Each volume is a wonderful bright clean copy. The condition is of the highest quality without any discernible flaws. No bumped corners, and free of any marks, writing, or stamps. Unread books with tight bindings. Due to the weight of this item, please allow 1 to 2 weeks for delivery.