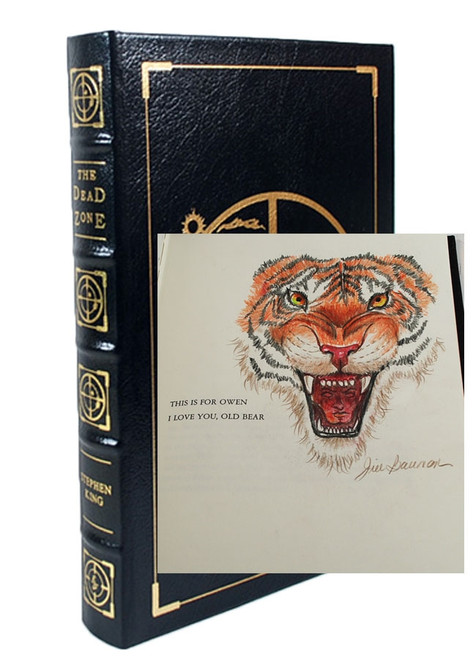 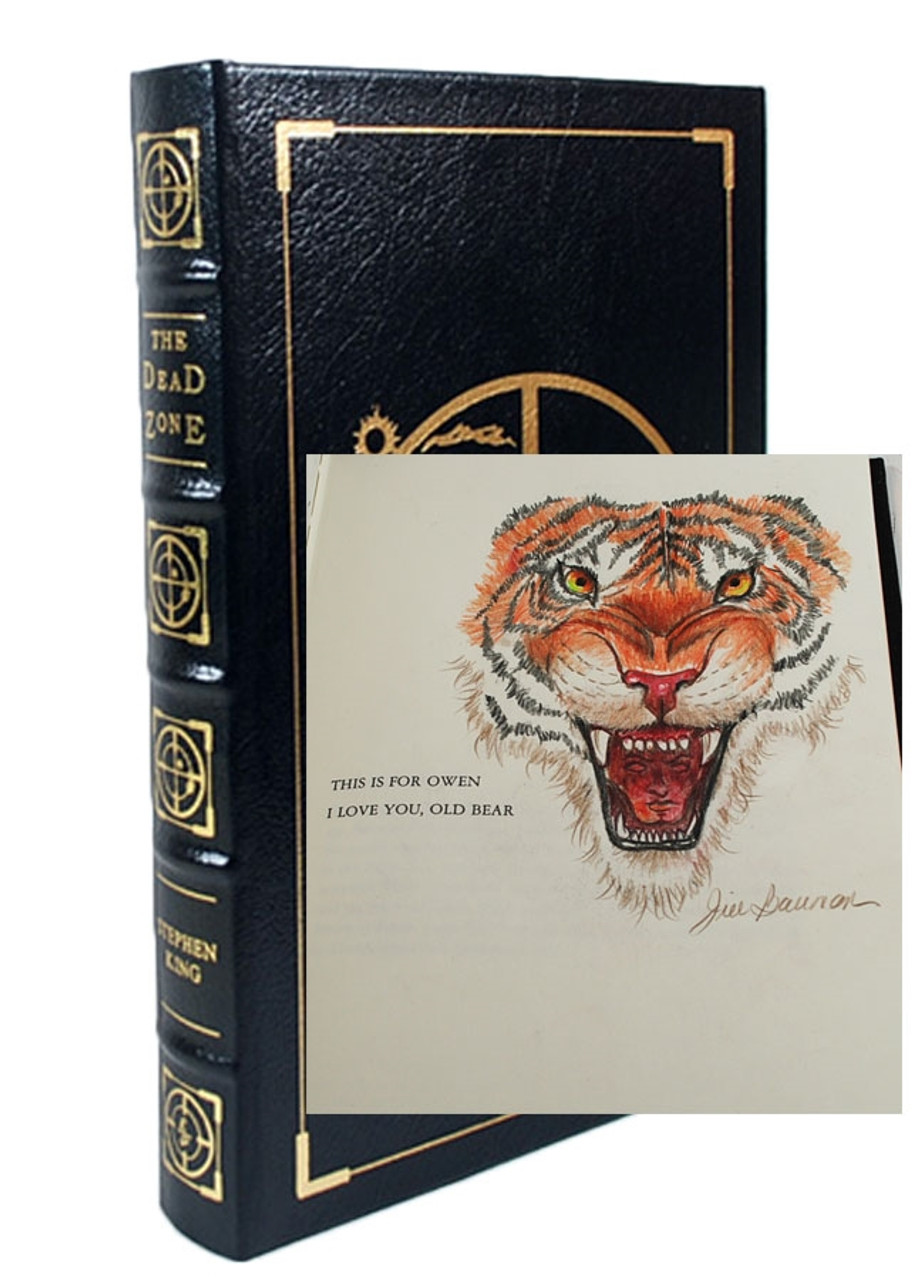 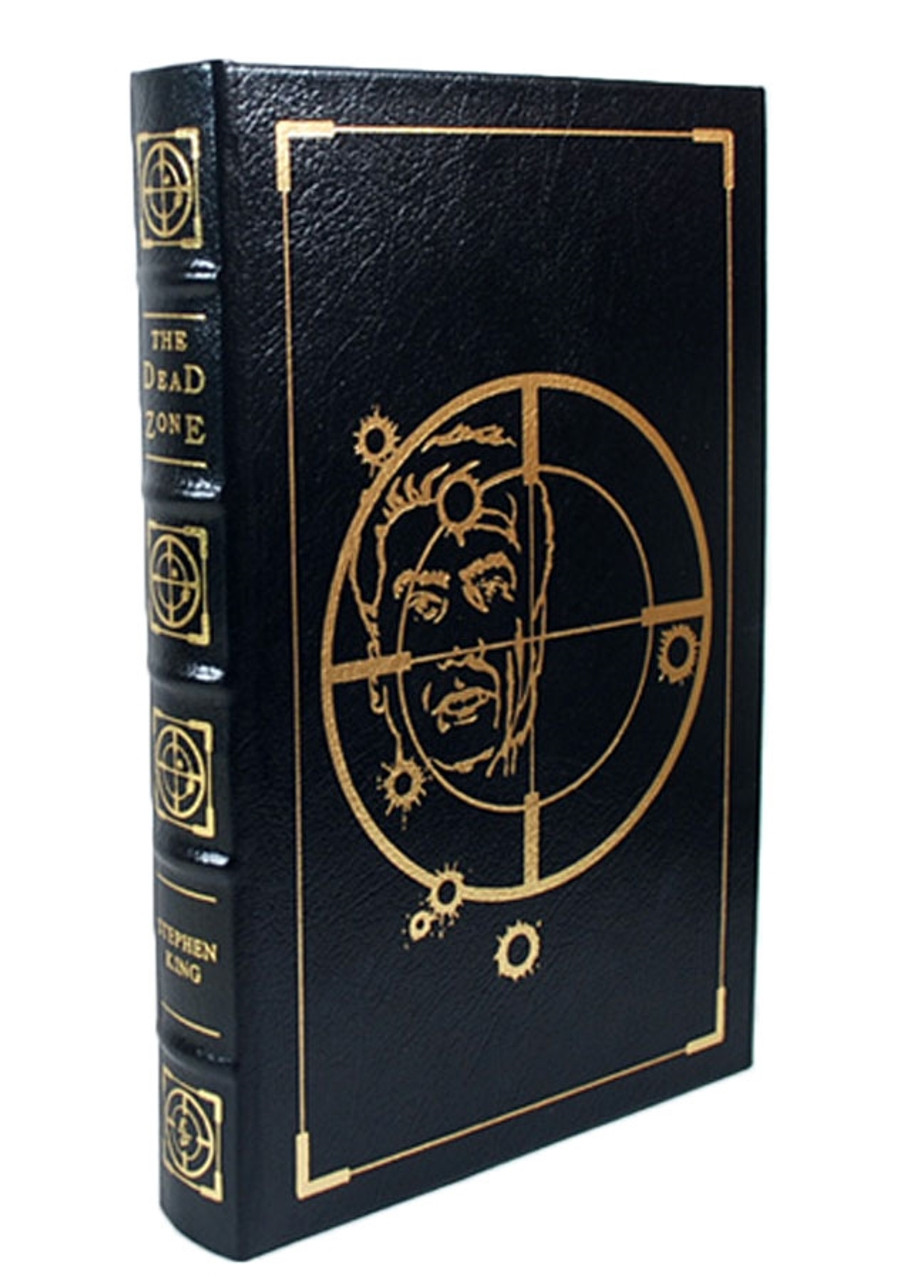 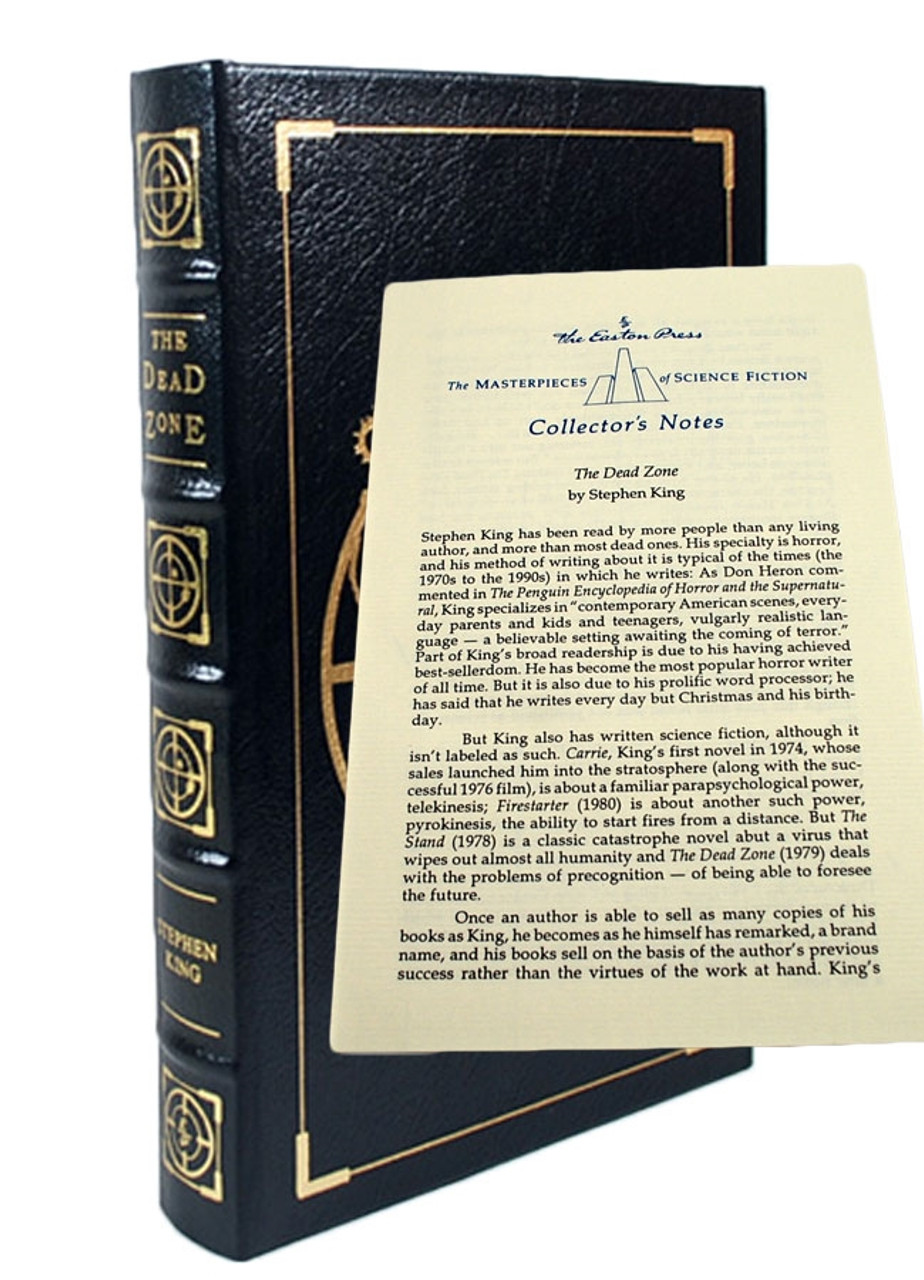 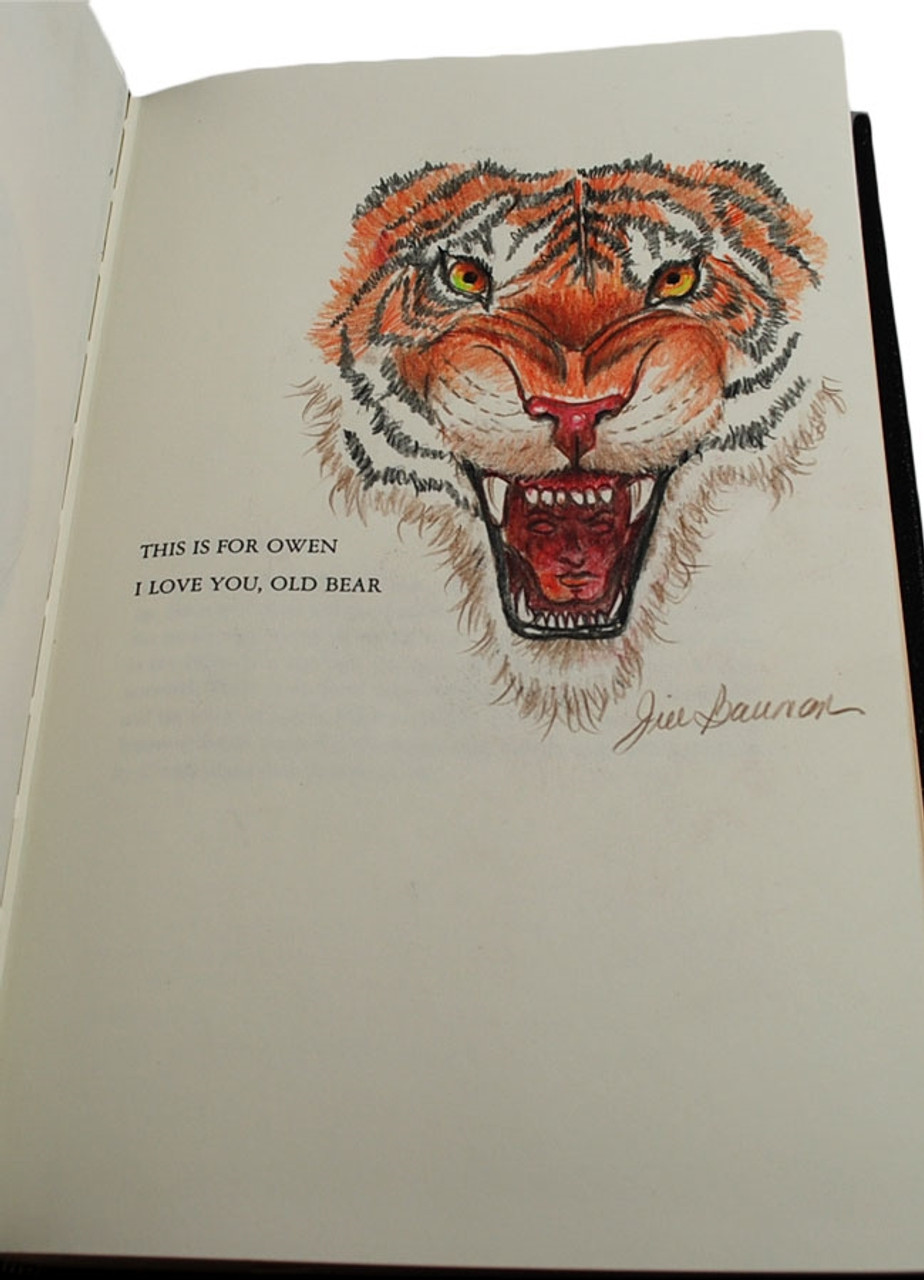 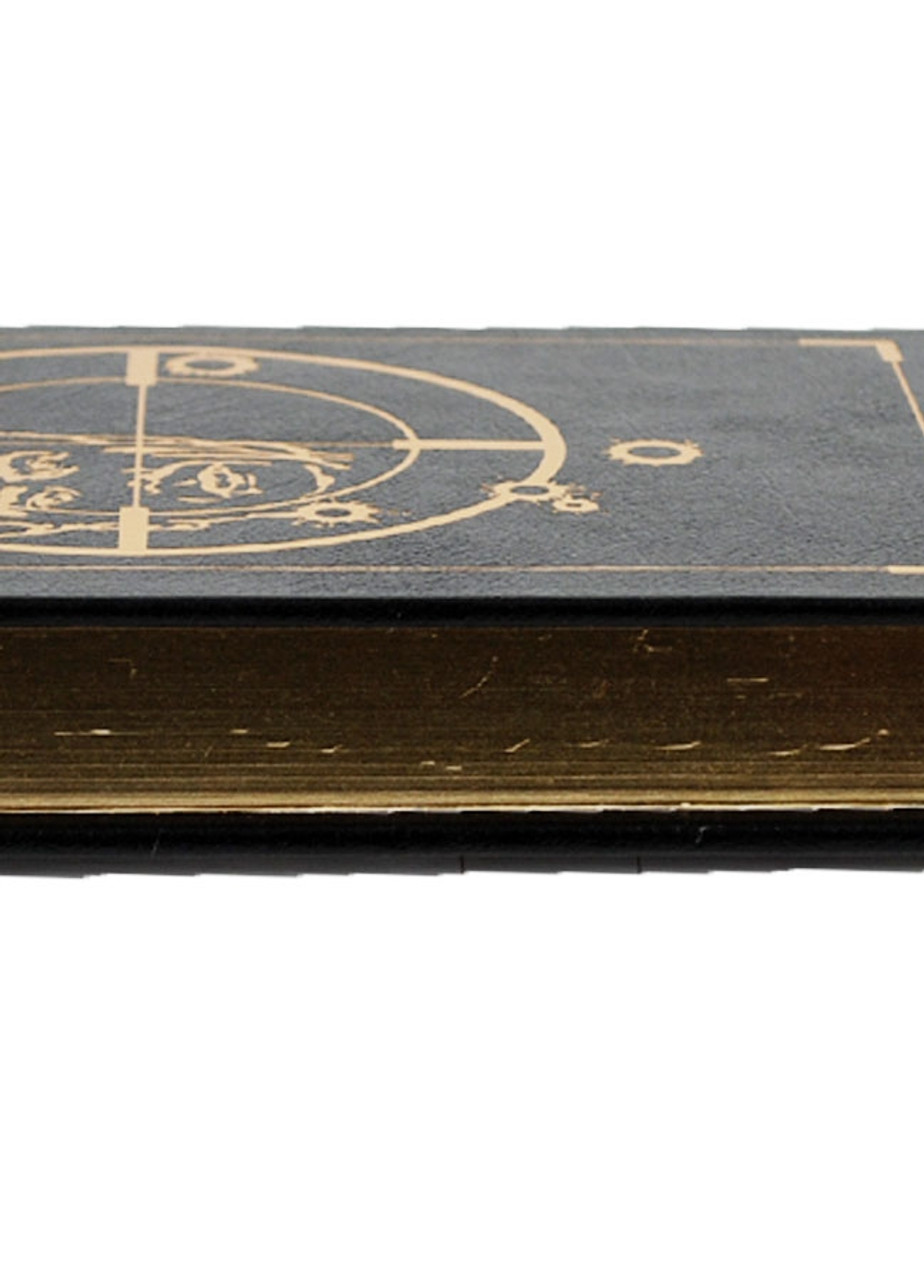 This edition has been personally hand signed by the artist Jill Bauman and includes an original artistic remarque.

The remarque adds a special value to your book because it is a one-of-a-kind original. This detailed finished color drawing ties in with the subject matter of the edition and is personally and individually drawn for you by Jill Bauman. Remarquing is only done on a select few books of each edition, thus making them highly collectible.

Besides enhancing the appearance and collectibility of your edition, it gives you the unique opportunity to own an original piece of work by the artist. This is a unique leather bound edition of Stephen King's "The Dead Zone".

This original color remarque depicts "The Tiger" from the novel. This hand-made piece of artwork was created with a no-smudge Verithin Prisma pencil.

Jill Bauman is best known as an artist. She has been nominated for the World Fantasy Award five times and nominated for the Chesley Award several times. Her art has been exhibited at the Delaware Art Museum, the Moore College of Art, Art Students League of New York, the NY Illustrators Society & and the Science Fiction Museum of Seattle. Jill Bauman has created hundreds of book covers for horror, mystery, fantasy, science fiction, and best selling books including 23 of the Cat Who, books by Lilian Jackson Braun during the 1980s and 1990s.

Jill Bauman got her Bachelor of Arts from Adelphi University. She did her Graduate work at Adelphi University and Queens College. She is a Life Member of the Art Students League of New York. She was born in Brooklyn, New York, and she currently lives in Queens, New York and has two grown daughters.
Source: Wikipedia

About "The Dead Zone"

Stephen Edwin King (born September 21, 1947) is an American author of horror, supernatural fiction, suspense, science fiction and fantasy. His books have sold more than 350 million copies, many of which have been adapted into feature films, miniseries, television series, and comic books. King has published 58 novels, including seven under the pen name Richard Bachman, and six non-fiction books. He has written around 200 short stories, most of which have been published in book collections.
Very Near Fine with only a couple of minor marks to the gilded page edges. See photos. Sharp corners all around with no attached bookplates. Unread book with tight spine.