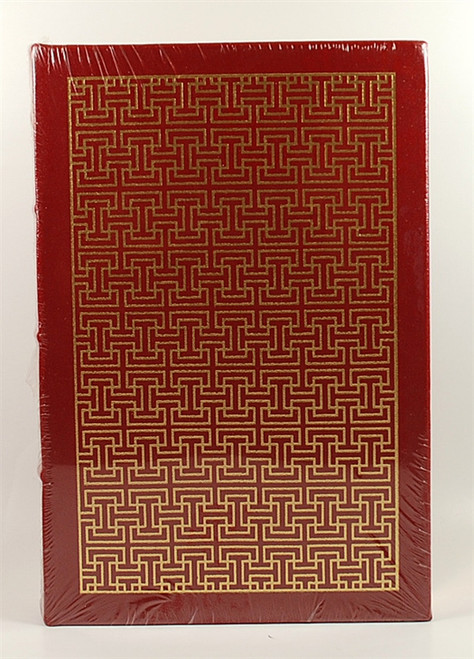 Limited Edition. A Collector's Edition that would make a great unique gift. Part of the 100 Greatest Books Ever Written collection by Easton Press. Beautifully illustrated and bound in full genuine leather. One of the most celebrated works of literature by a historical writer. Illustrated by John Flaxman with a translation by Alexander Pope. A magnificent leather bound collector's edition to display in your home library or office. Condition: As New. Sealed. The condition is of the highest quality. A wonderful bright clean copy. Free of markings, writings, or stamps. No attached bookplates or indication of any removed. Unread. No scratches or blemishes on the gilded page edges. Includes unattached Ex-Libris bookplate for your own personalization. Includes the classic Easton Press qualities: * Premium Leather * Silk Moire Endleaves * Distinctive Cover Design * Hubbed Spine, Accented in Real 22KT Gold * Satin Ribbon Page Marker * Gilded Page Edges * Long-lasting, High Quality Acid-neutral Paper * Smyth-sewn Pages for Strength and Durability * Beautiful Illustrations About The Iliad of Homer The Iliad Of Homer, one of the great classic in history is the first of Homer's great tales. In the tenth year of the Trojan War, tensions are running high among the Achaians (a super-ancient name for the Ancient Greeks). First, the priest Chryses comes to ask their leader, King Agamemnon, to release his daughter, whom Agamemnon was holding captive. When Agamemnon refuses, the priest prays to the god Apollo to send a plague against the Achaians. After nine days of plague, the Achaians assemble again and demand that Agamemnon give the girl back. Agamemnon eventually agrees, but only if he gets to take Briseis, the girlfriend of Achilleus, the greatest warrior of the Achaians. Even though Achilleus gives her up, he becomes so enraged that he refuses to fight any more. That and he prays to his mother, Thetis, who happens to be a goddess, to pull some strings with the other gods so that the Achaians will start getting defeated in battle and realize how much they depend on him. Achilleus's mom definitely spoils him. She gets Zeus, the king of the gods, to agree to Achilleus's request. Sure enough, the next day the Trojans make a successful counterattack, led by Hektor, their greatest warrior. Several days of violent fighting follow, at the end of which the Trojans have the Achaians pinned against the beach, and are threatening to burn their ships. At this point, Achilleus's best friend Patroklos asks for permission to go into battle in Achilleus's place. Achilleus grants Patroklos's request, and even lets him wear his armor. Patroklos's gambit is successful  when the Trojans see him, they think he must be Achilleus and become absolutely terrified. The plan goes off the rails, however, when Hektor kills Patroklos  with the help of the god Apollo and a minor Trojan warrior named Euphorbos. Hektor then takes the armor off Patroklos's body. When Achilleus learns of the death of his friend, he experiences terrible grief and swears revenge. He sends his mother, Thetis, to get a new suit of armor made especially for him by the fire-god, Hephaistos. The next day, Achilleus rejoins the battle and kills many Trojans, including Hektor in a one-on-one battle. But Achilleus isn't satisfied. For the next few days, he continually abuses Hektor's body in gruesome ways, even after Patroklos has received a proper funeral. The gods don't like this, and send a message down to Achilleus telling him to give up the body. When the Trojan King Priam  Hektor's father  comes unarmed, by night, to ask for his son's body, Achilleus agrees. The two men eat together and experience a moment of shared humanity. Achilleus grants the Trojans a grace period to perform their funeral rituals. The poem ends with the funeral of Hektor  though we know that soon Achilleus will die and Troy will be captured.
VERY FINE GUARANTEED

Winslow Homer (February 24, 1836 ? September 29, 1910) was an American landscape painter and printmaker, best known for his marine subjects. He is considered one of the foremost painters in...

A Luxurious Leather Bound Masterpiece Easton Press, Norwalk, CT. Jack London "The Call Of The Wild" Limited Edition - Collector's Edition. A great unique gift for yourself or for someone else...