“Fans of Seinfeld will eat this up, and aspiring comics will want to study how he shapes his seemingly effortless humor.” –Kirkus Reviews

Jerry Seinfeld is an American comedian, actor, writer and producer. He is known for playing a semi-fictionalized version of himself in the sitcom Seinfeld, which he created and wrote with Larry David.

FEWER THAN 20 OF THESE WILL BE PRODUCED. 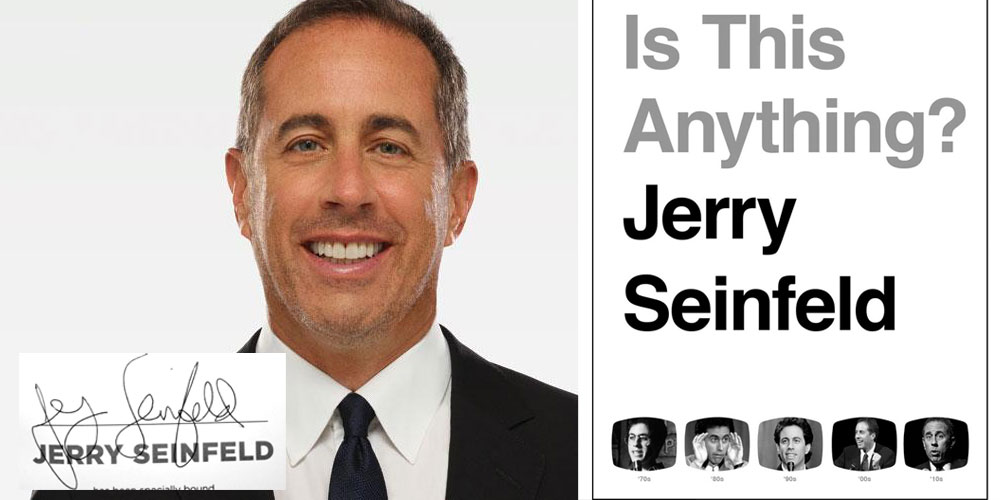 ABOUT "IS THIS ANYTHING?"

The first book in twenty-five years from Jerry Seinfeld features his best work across five decades in comedy.


Since his first performance at the legendary New York nightclub “Catch a Rising Star” as a twenty-one-year-old college student in fall of 1975, Jerry Seinfeld has written his own material and saved everything. “Whenever I came up with a funny bit, whether it happened on a stage, in a conversation, or working it out on my preferred canvas, the big yellow legal pad, I kept it in one of those old school accordion folders,” Seinfeld writes. “So I have everything I thought was worth saving from forty-five years of hacking away at this for all I was worth.”

For this book, Jerry Seinfeld has selected his favorite material, organized decade by decade. In page after hilarious page, one brilliantly crafted observation after another, readers will witness the evolution of one of the great comedians of our time and gain new insights into the thrilling but unforgiving art of writing stand-up comedy.

Jerome Allen Seinfeld is an American comedian, actor, writer and producer. He is known for playing a semi-fictionalized version of himself in the sitcom Seinfeld, which he created and wrote with Larry David. The show aired on NBC from 1989 until 1998, becoming one of the most acclaimed and popular sitcoms of all time. As a stand-up comedian, Seinfeld specializes in observational comedy. In 2004, Comedy Central named him the 12th-greatest stand-up comedian of all time.

Seinfeld produced, co-wrote, and starred in the 2007 film Bee Movie, which was nominated for a Golden Globe Award for Best Animated Feature Film. In 2010, he premiered a reality series called The Marriage Ref, which aired for two seasons on NBC. Seinfeld is the creator and host of the series Comedians in Cars Getting Coffee on Netflix. He is married to author and philanthropist Jessica Seinfeld, with whom he has three children.


“Fans of Seinfeld will eat this up, and aspiring comics will want to study how he shapes his seemingly effortless humor.”—Kirkus Reviews

“Comedian Seinfeld reflects on the absurdities of life in a laugh-out-loud volume that gathers jokes he’s written over the course of his 45-year career along with reminiscences on the lifestyle and craft of stand-up…This sharply observed, life-in-gags treasure trove offers essential reading for comedy fans, from a master of the form.”—Publishers Weekly, starred review

“Admirers of Seinfeld's stream-of-consciousness observations about the minutiae of daily life will find much to enjoy here, and readers will also appreciate the window onto his evolution as a comic as he changes from a single guy in a messy apartment to the cocreator and star of a hit sitcom to a husband and father who watches (and critiques) Star Wars with his kids...a welcome treasure trove of laughs.”—Booklist

"The book is consistently funny and it’s impressive that someone could have had a lifetime of so many insightful observations about seemingly mundane things... It’s unlike anything I’ve ever seen..."—Paul Leslie

Seinfeld’s jokes on the page makes his comedy come to life with new meaning. As you consider Seinfeld’s career, which has spanned nearly five decades, you realize that even though he claims his comedy is about nothing, you could just as easily say it’s about everything."—BookPage