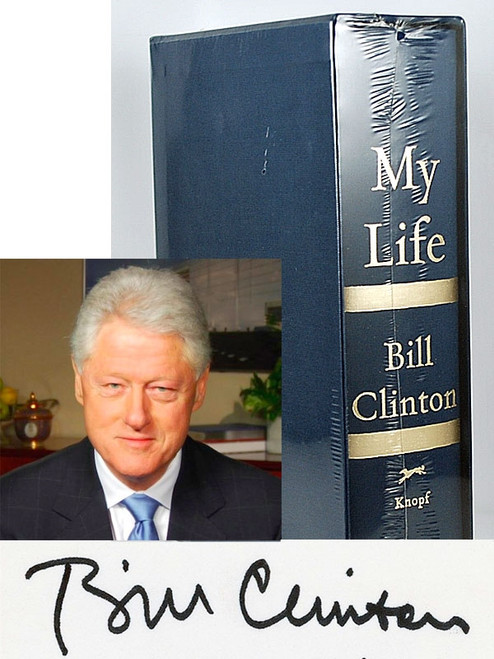 Personally signed by president Bill Clinton on a special title page.
"A unique book by a unique American." A wonderful book to showcase in your presidential library and to enjoy for many years. A highly sought after signature by the very popular president.
How do I know the signature is authentic?
The signature is guaranteed to be authentic by Knopf publishers. This is the official signed deluxe autobiography of only 1,500 signed and numbered copies. Produced by Knopf publishers in 2004.

How many of these books exist?
This autographed deluxe edition was produced to a limited number of only 1,500 signed and numbered copies. Each book includes a full navy blue cloth case with a Bill Clinton gold stamp on spine.
...the strikingly candid portrait of a global leader who decided early in life to devote his intellectual and political gifts, and his extraordinary capacity for hard work, to serving the public.

Only 1,500 copies available of this edition. Each book includes:

As New. Sealed. This volume is still sealed in the original shrink-wrap without any discernible flaws. The condition is of the highest quality. Sharp corners all around.