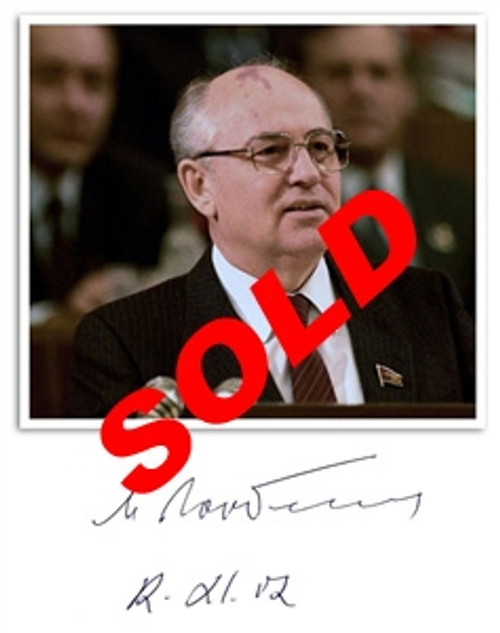 A wonderful presidential signed first edition. This hardcover book has been personally hand signed by Mikhail Gorbachev, the former President of the Soviet Union.

Fine/Fine. A wonderful bright clean copy without any marks, writing, or stamps. No bookplates attached.

Highly anticipated, these memoirs are hampered by Gorbachev's attempt to address two audiences: Russians and the world abroad. American eyes (except those of scholars) will be glazing over as the author, primarily addressing his compatriots and prone to quoting pages from his own speeches, explains the reforms he forced onto the Communist Party. Yet because of their celebrity-obsessed reading habits, Americans will be fascinated by Gorbachev's autobiographical passages on how he reached the peak of power. It was a typical apparatchik's ascent, during which Gorbachev discreetly hid his doubts about the Stalinist system while impressing powerful patrons, such as KGB boss Yuri Andropov, with his pragmatic, can-do political skills. Thus Gorby was plucked from the provinces in 1978 for the thankless task of fixing the Achilles' heel of the Soviet economy--agriculture.

This appointment opens the memoir. In recounting it, Gorbachev dwells less on his failure to fix the collective farm system than on on his position in the geriatric Politburo, about whose "total disarray" he delivers many a colorful vignette. After an interlude recalling his upbringing in the 1930s and 1940s, sadly typical for the times (both grandfathers arrested; his father wounded in the war), Gorbachev returns to defending his leadership of the USSR and the part incessant power struggles played in the failure of his reform effort. (Yeltsin takes heavy criticism and is accused of faking a suicide attempt.) A memoir of historical importance, these recollections, as a long-term resource, will be best for larger libraries.