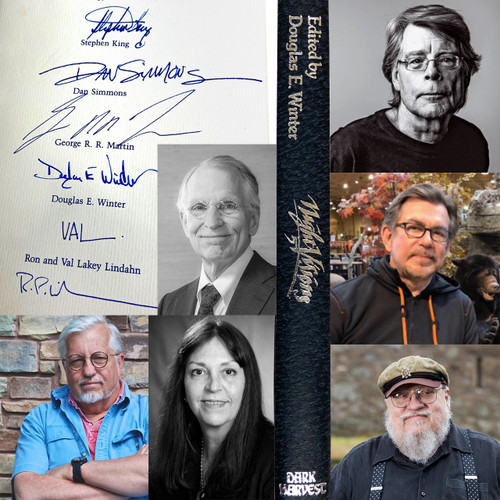 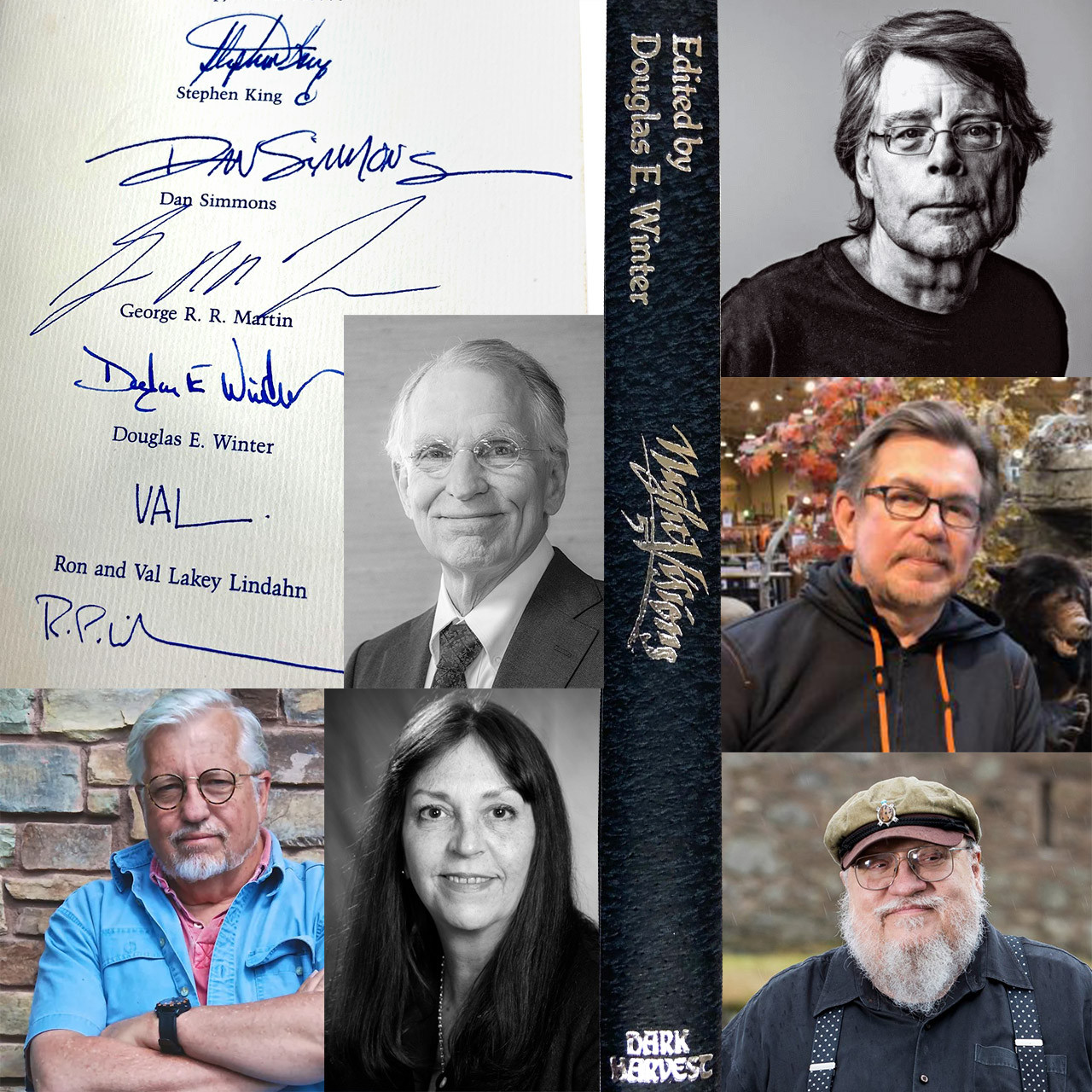 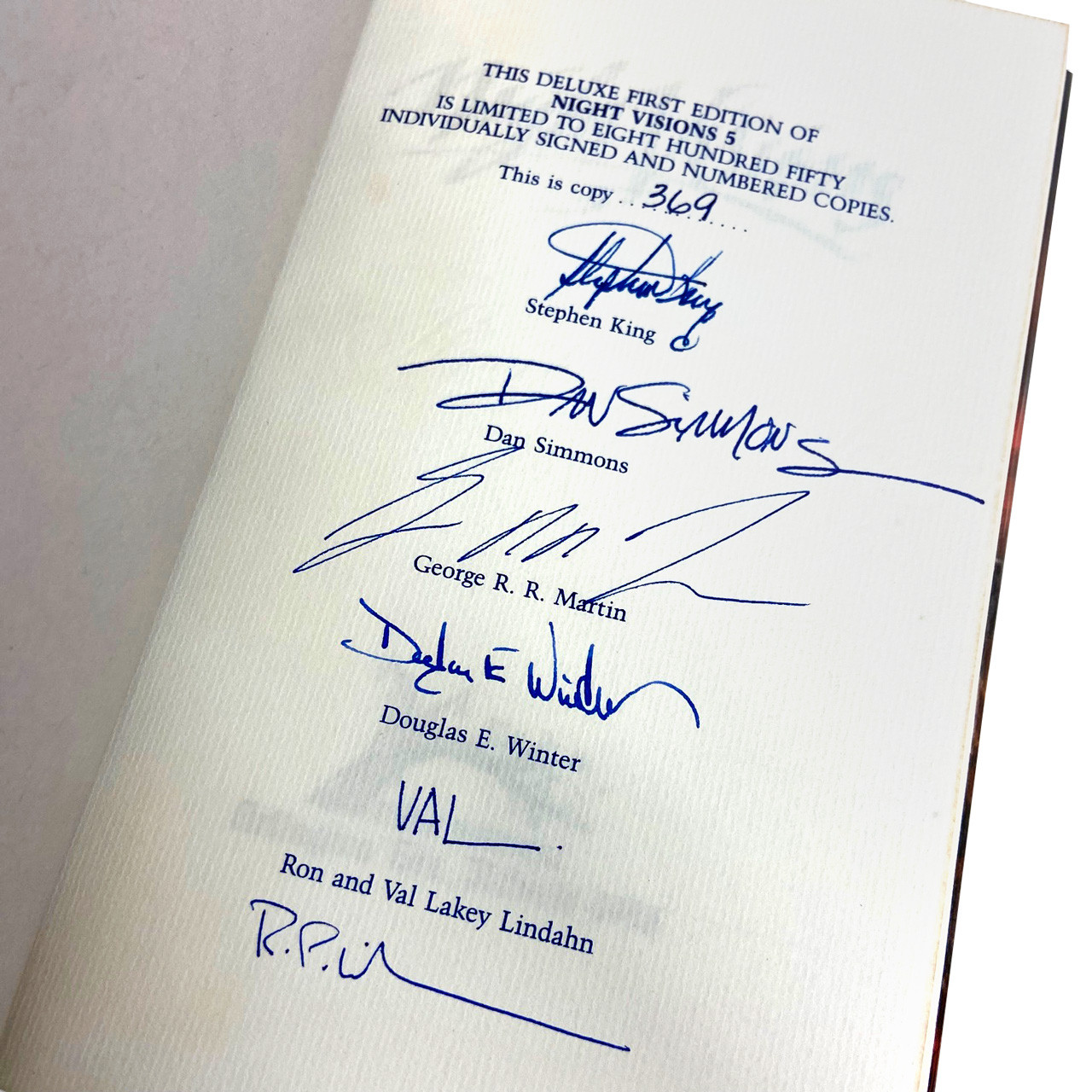 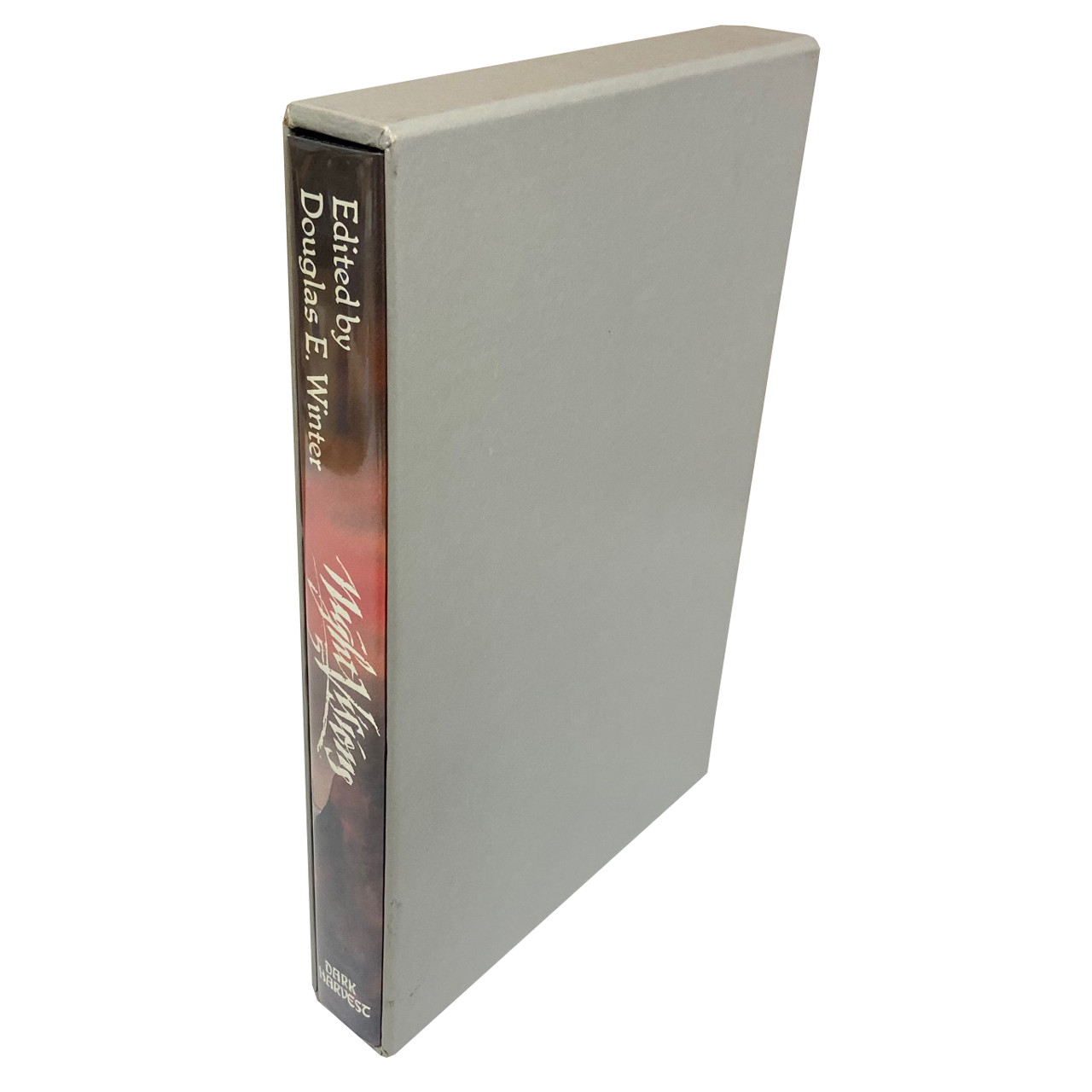 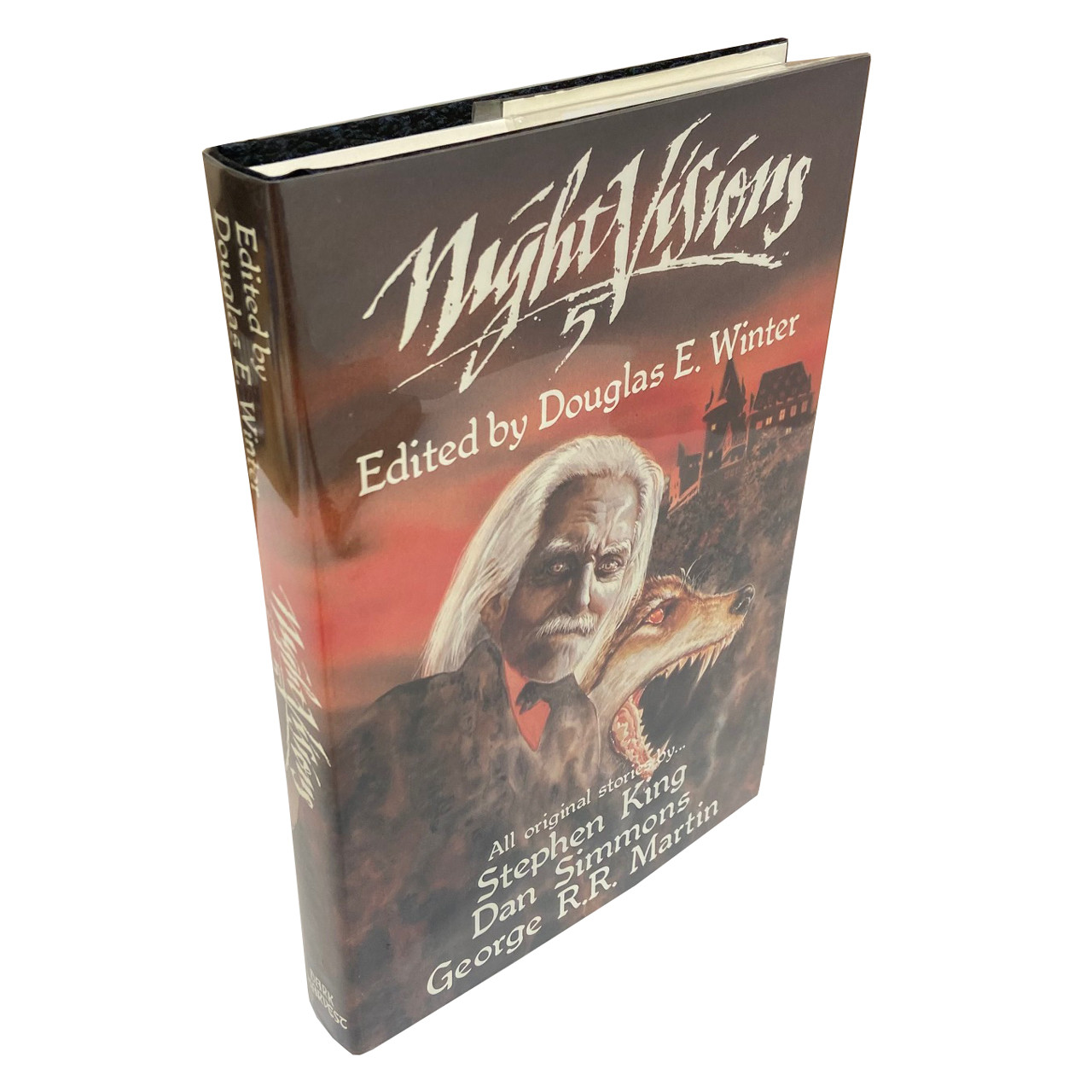 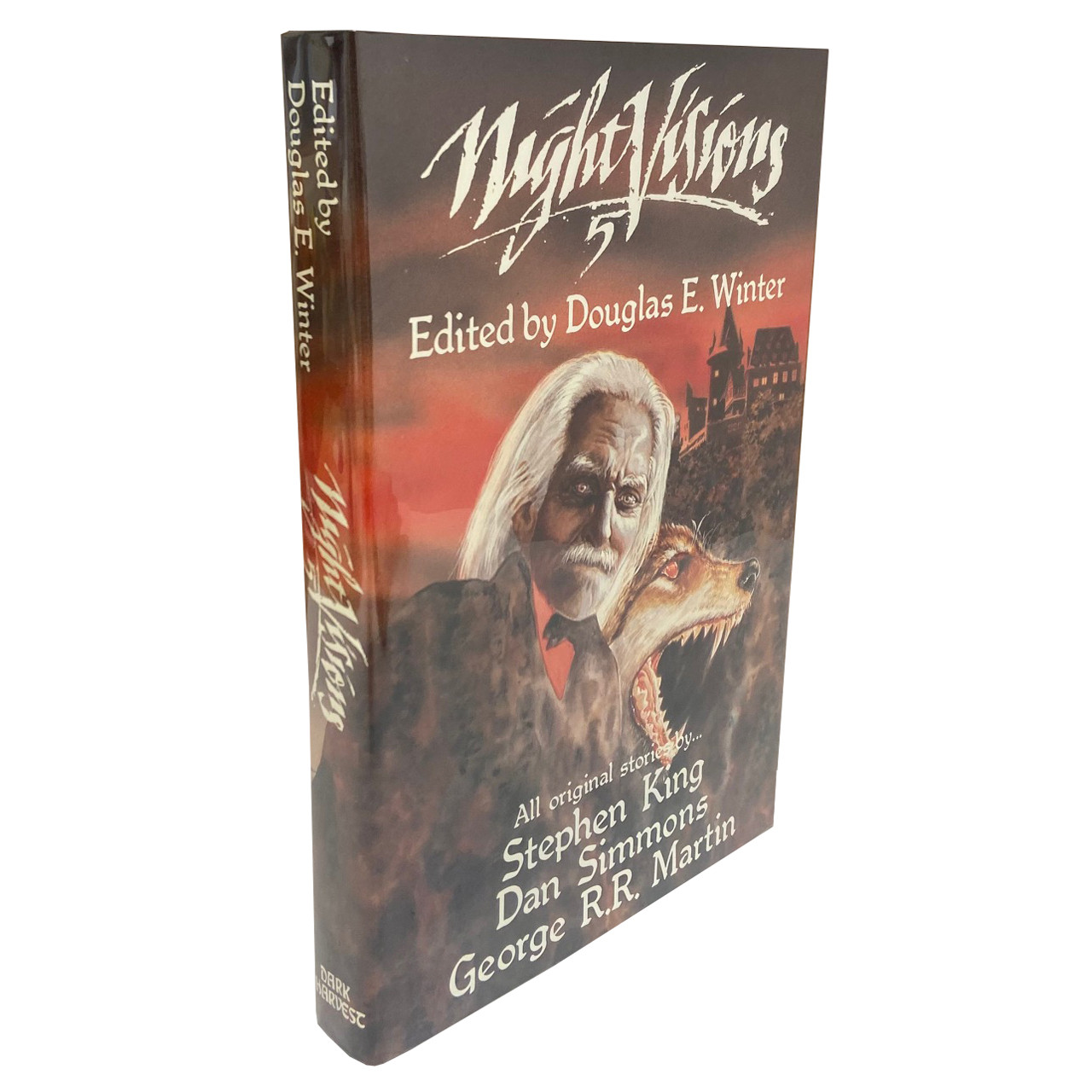 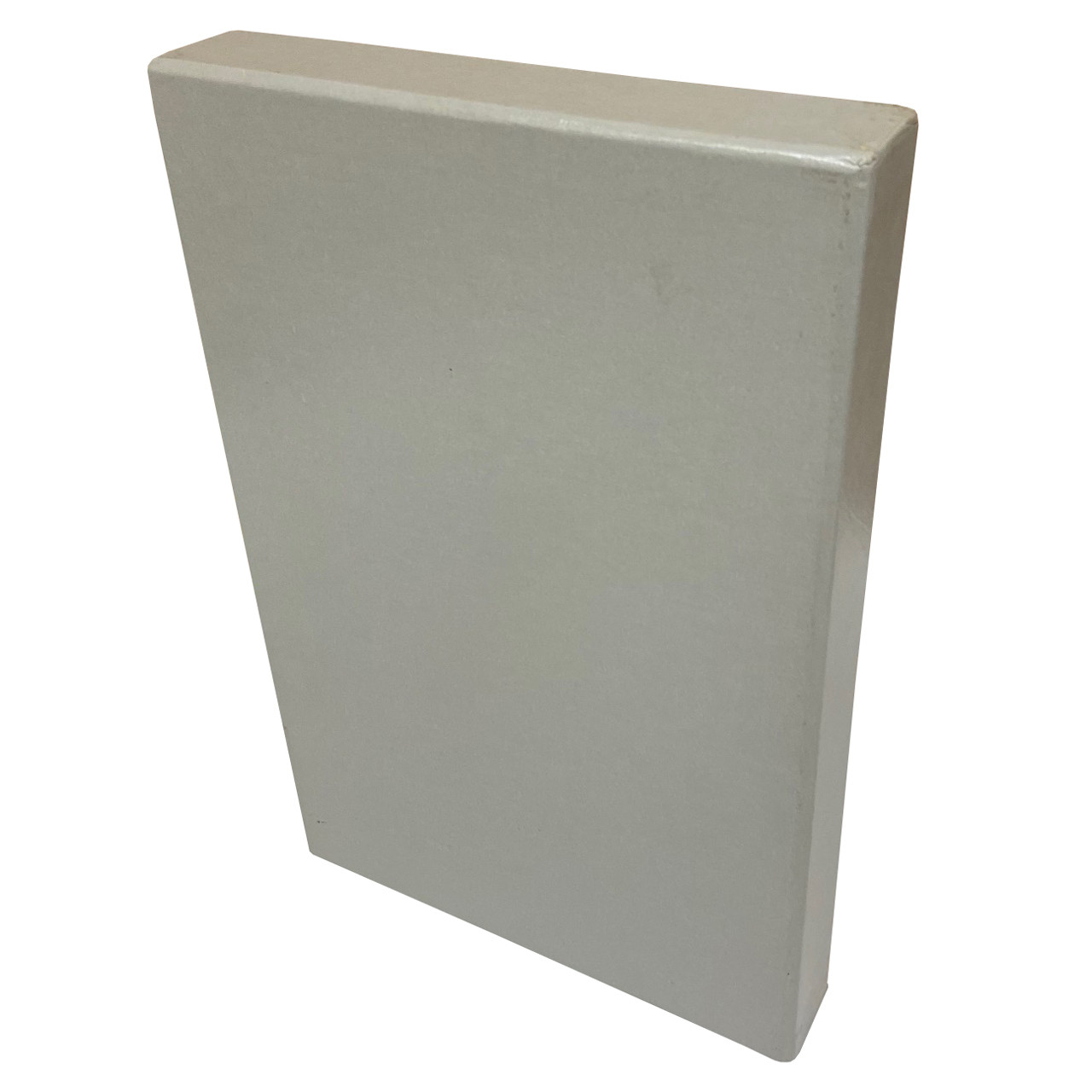 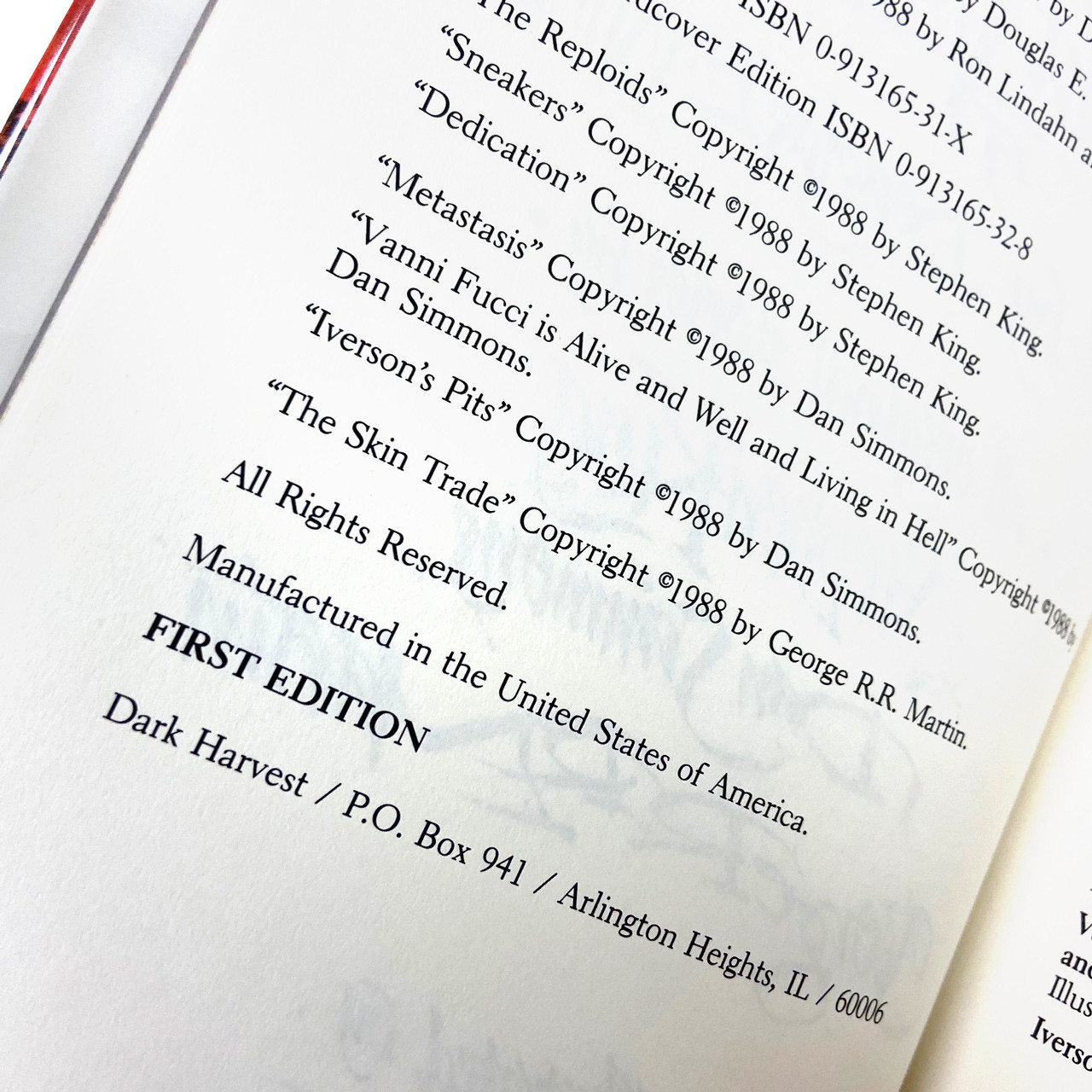 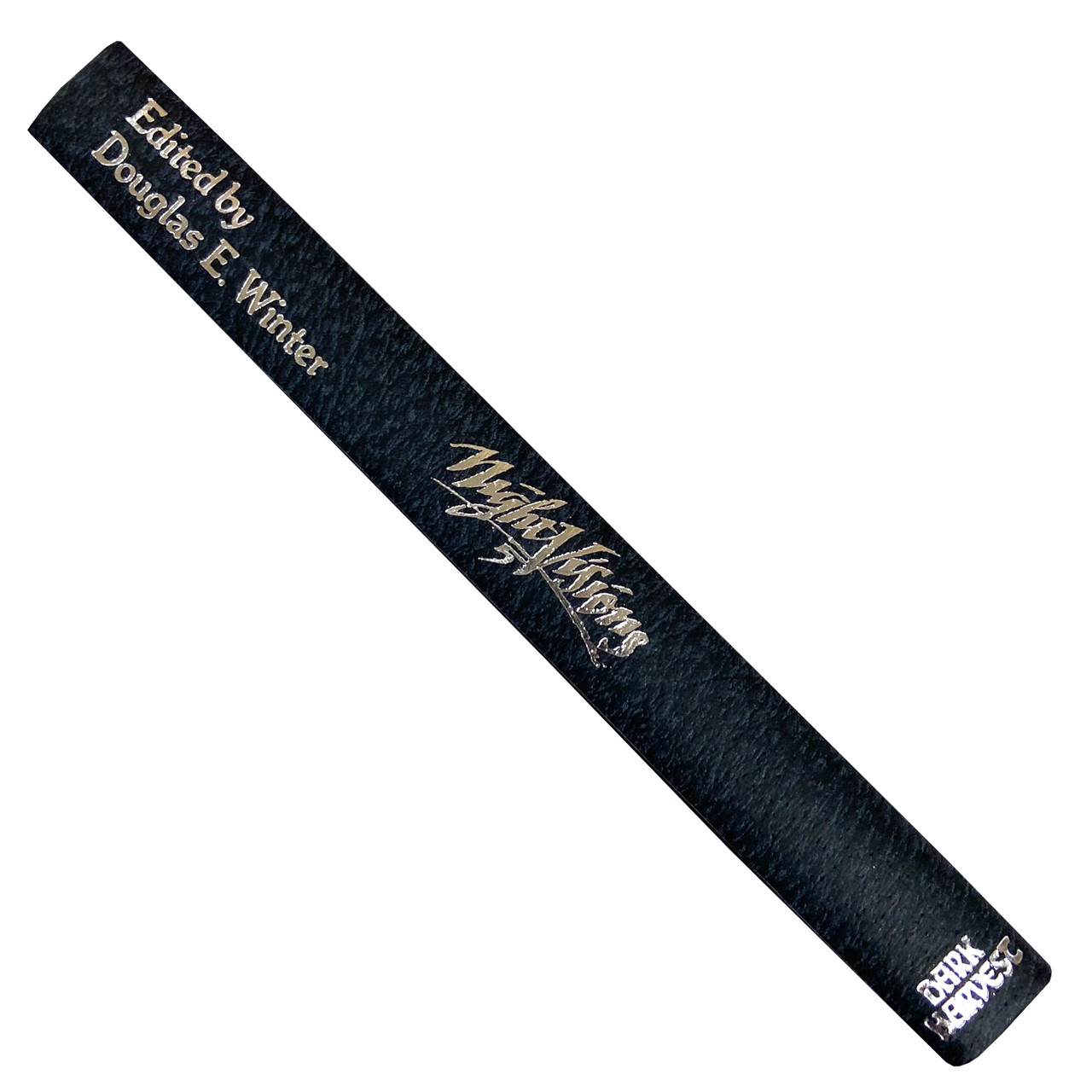 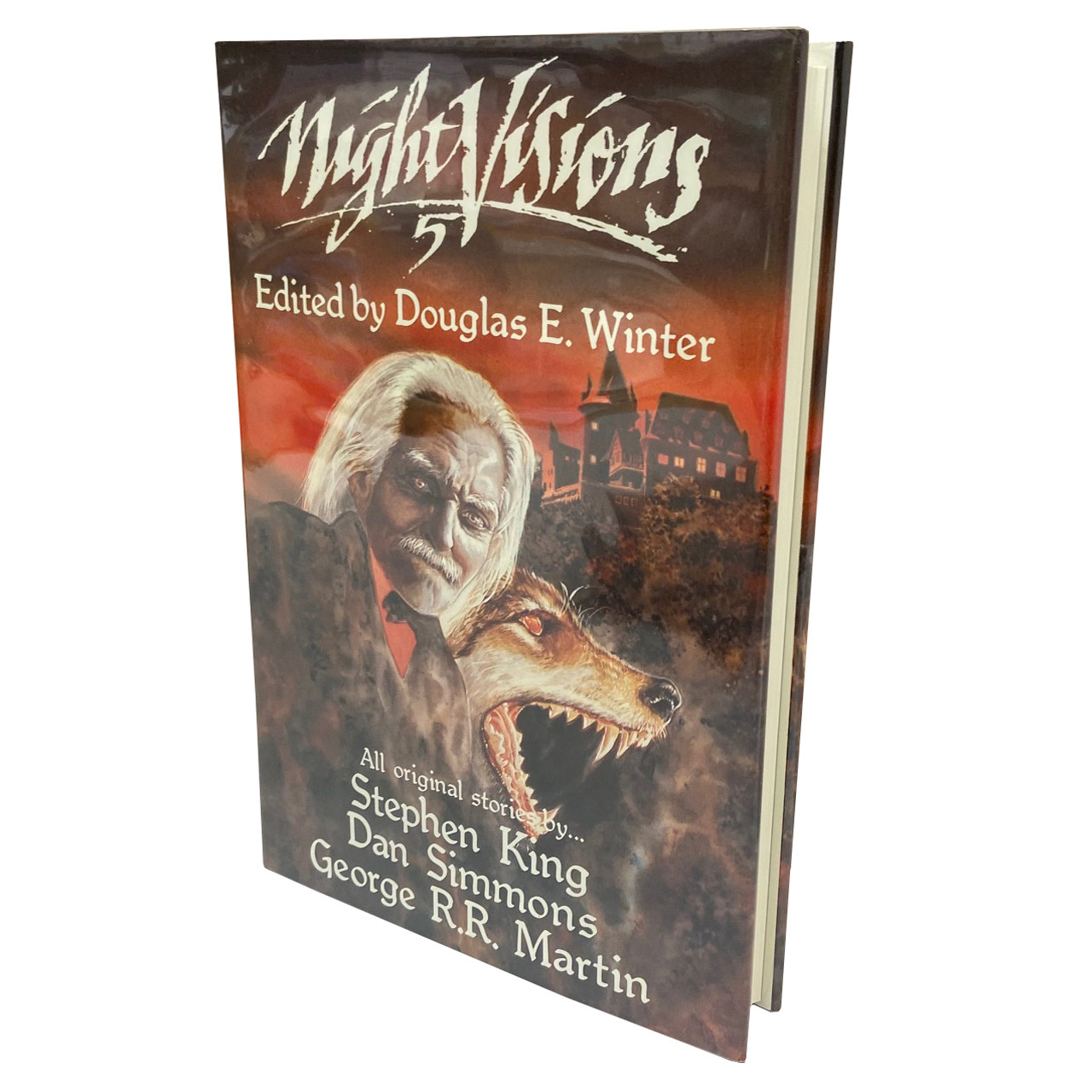 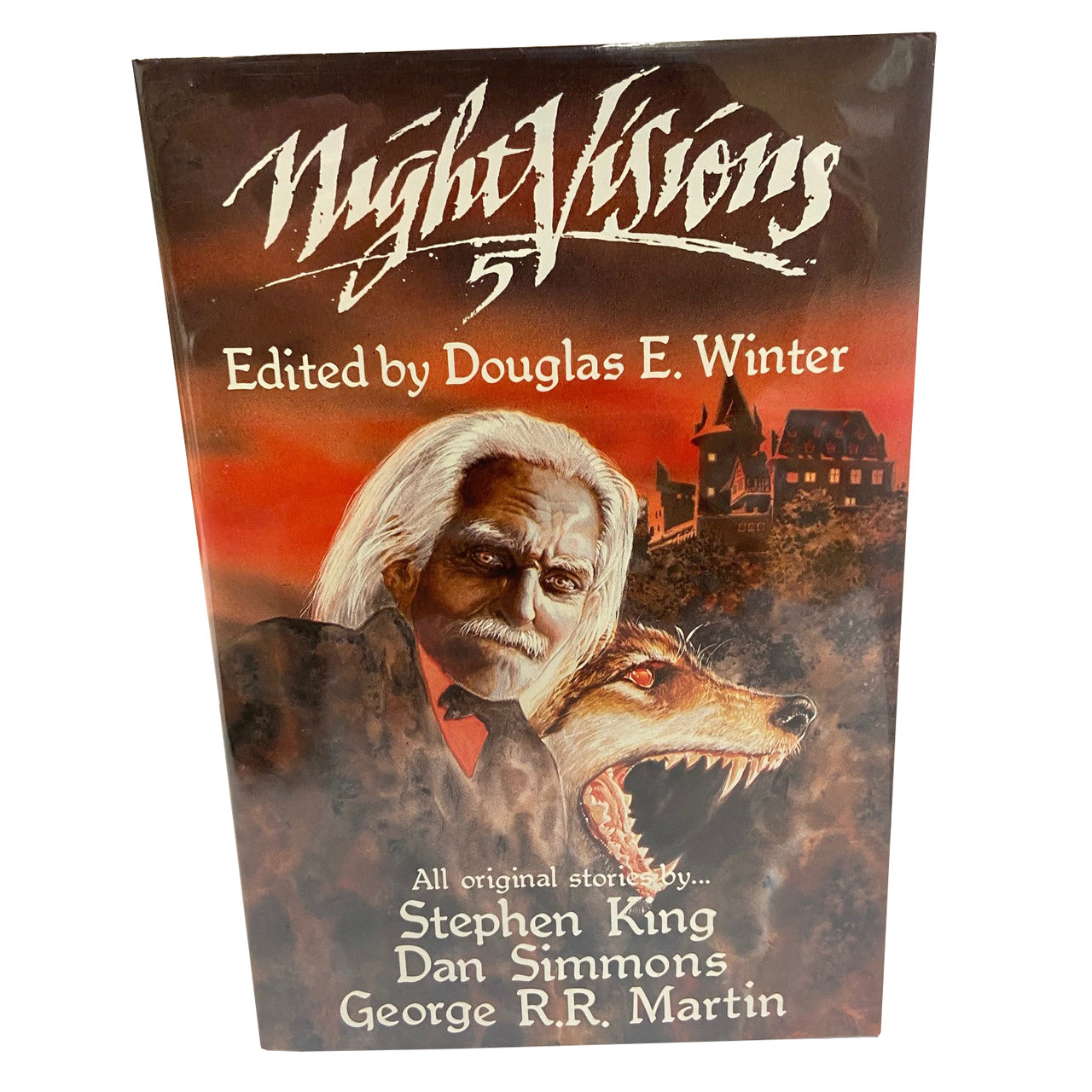 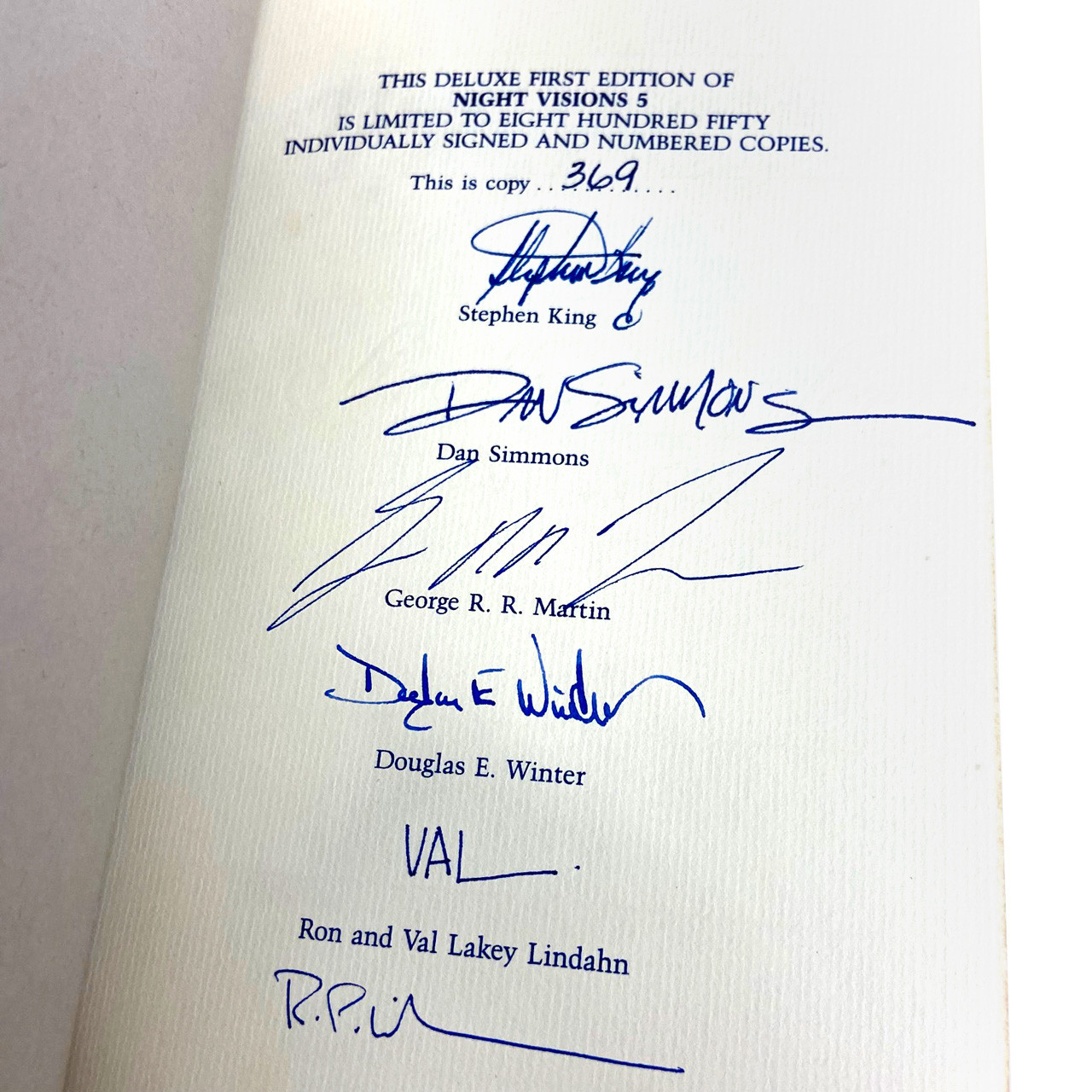 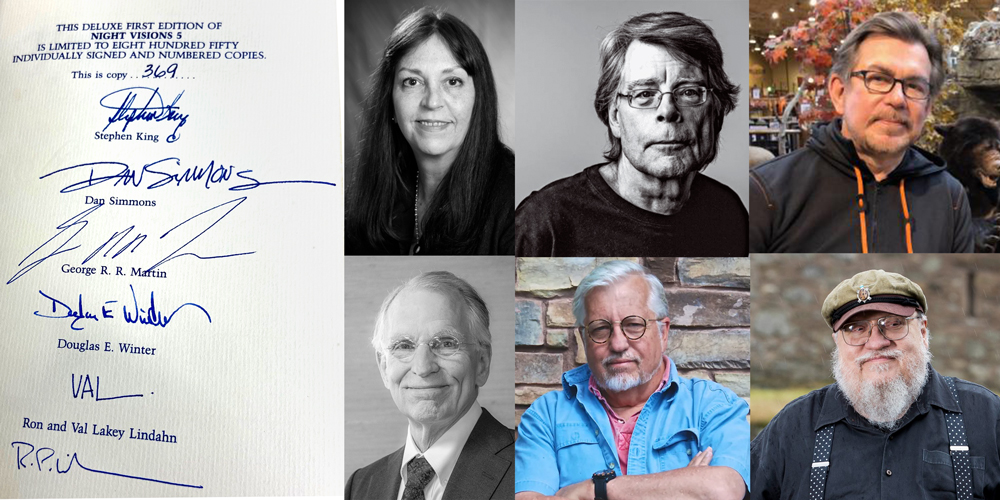 Dark Visions 5 is a horror fiction compilation, with three short stories by Stephen King, three by Dan Simmons and a novella by George R. R. Martin.

"FIRST EDITION" as stated on the copyright page.

Two of the stories by King, "Sneakers" and "Dedication", were later included in his 1993 anthology Nightmares & Dreamscapes.

All three stories by Simmons were later included in his 1990 collection Prayers to Broken Stones.

Martin's The Skin Trade was later included in Quartet: Four Tales from the Crossroads (2001) and Dreamsongs: A Retrospective (2003).

"Night Visions 5" was later issued under the titles Dark Love and The Skin Trade.

Winter grew up in Granite City, Illinois. He graduated from Harvard Law School in 1975 and became a lawyer in Washington, DC, currently working as partner at law firm Bryan Cave, concentrating on complex litigation, product liability, aerospace and aviation and entertainment law. Winter has also taught legal writing at the University of Iowa.

A lifelong interest in horror has led him to develop a parallel career as horror writer and horror critic. Winter edited horror anthologies Prime Evil (1988), and Revelations (1997) as well as the interviews collection Faces of Fear (1985, revised 1990). He has also written biographies of Stephen King and Clive Barker. He is a member of the National Book Critics Circle.

Stephen King was born in Portland, Maine in 1947, the second son of Donald and Nellie Ruth Pillsbury King. He made his first professional short story sale in 1967 to Startling Mystery Stories. In the fall of 1971, he began teaching high school English classes at Hampden Academy, the public high school in Hampden, Maine. Writing in the evenings and on the weekends, he continued to produce short stories and to work on novels. In the spring of 1973, Doubleday & Co., accepted the novel Carrie for publication, providing him the means to leave teaching and write full-time. He has since published over 50 books and has become one of the world's most successful writers. King is the recipient of the 2003 National Book Foundation Medal for Distinguished Contribution to the American Letters and the 2014 National Medal of Arts.

Stephen lives in Maine and Florida with his wife, novelist Tabitha King. They are regular contributors to a number of charities including many libraries and have been honored locally for their philanthropic activities.

George R.R. Martin is the globally bestselling author of many fine novels, including A Game of Thrones, A Clash of Kings, A Storm of Swords, A Feast for Crows, and A Dance with Dragons, which together make up the series A Song of Ice and Fire, on which HBO based the world’s most-watched television series, Game of Thrones. Other works set in or about Westeros include The World of Ice and Fire, and A Knight of the Seven Kingdoms. His science fiction novella Nightflyers has also been adapted as a television series; and he is the creator of the shared-world Wild Cards universe, working with the finest writers in the genre. He lives in Santa Fe, New Mexico.

Dan Simmons was born in Peoria, Illinois, in 1948, and grew up in various cities and small towns in the Midwest, including Brimfield, Illinois, which was the source of his fictional "Elm Haven" in 1991's SUMMER OF NIGHT and 2002's A WINTER HAUNTING. Dan received a B.A. in English from Wabash College in 1970, winning a national Phi Beta Kappa Award during his senior year for excellence in fiction, journalism and art.

Dan received his Masters in Education from Washington University in St. Louis in 1971. He then worked in elementary education for 18 years -- 2 years in Missouri, 2 years in Buffalo, New York -- one year as a specially trained BOCES "resource teacher" and another as a sixth-grade teacher -- and 14 years in Colorado.

His last four years in teaching were spent creating, coordinating, and teaching in APEX, an extensive gifted/talented program serving 19 elementary schools and some 15,000 potential students. During his years of teaching, he won awards from the Colorado Education Association and was a finalist for the Colorado Teacher of the Year. He also worked as a national language-arts consultant, sharing his own "Writing Well" curriculum which he had created for his own classroom. Eleven and twelve-year-old students in Simmons' regular 6th-grade class averaged junior-year in high school writing ability according to annual standardized and holistic writing assessments. Whenever someone says "writing can't be taught," Dan begs to differ and has the track record to prove it. Since becoming a full-time writer, Dan likes to visit college writing classes, has taught in New Hampshire's Odyssey writing program for adults, and is considering hosting his own Windwalker Writers' Workshop.

Dan's first published story appeared on Feb. 15, 1982, the day his daughter, Jane Kathryn, was born. He's always attributed that coincidence to "helping in keeping things in perspective when it comes to the relative importance of writing and life."

Dan has been a full-time writer since 1987 and lives along the Front Range of Colorado -- in the same town where he taught for 14 years -- with his wife, Karen. He sometimes writes at Windwalker -- their mountain property and cabin at 8,400 feet of altitude at the base of the Continental Divide, just south of Rocky Mountain National Park. An 8-ft.-tall sculpture of the Shrike -- a thorned and frightening character from the four Hyperion/Endymion novels -- was sculpted by an ex-student and friend, Clee Richeson, and the sculpture now stands guard near the isolated cabin.

Dan is one of the few novelists whose work spans the genres of fantasy, science fiction, horror, suspense, historical fiction, noir crime fiction, and mainstream literary fiction . His books are published in 27 foreign counties as well as the U.S. and Canada.

Many of Dan's books and stories have been optioned for film, including SONG OF KALI, DROOD, THE CROOK FACTORY, and others. Some, such as the four HYPERION novels and single Hyperion-universe novella "Orphans of the Helix", and CARRION COMFORT have been purchased (the Hyperion books by Warner Brothers and Graham King Films, CARRION COMFORT by European filmmaker Casta Gavras's company) and are in pre-production. Director Scott Derrickson ("The Day the Earth Stood Stood Still") has been announced as the director for the Hyperion movie and Casta Gavras's son has been put at the helm of the French production of Carrion Comfort. Current discussions for other possible options include THE TERROR. Dan's hardboiled Joe Kurtz novels are currently being looked as the basis for a possible cable TV series.

In 1995, Dan's alma mater, Wabash College, awarded him an honorary doctorate for his contributions in education and writing. 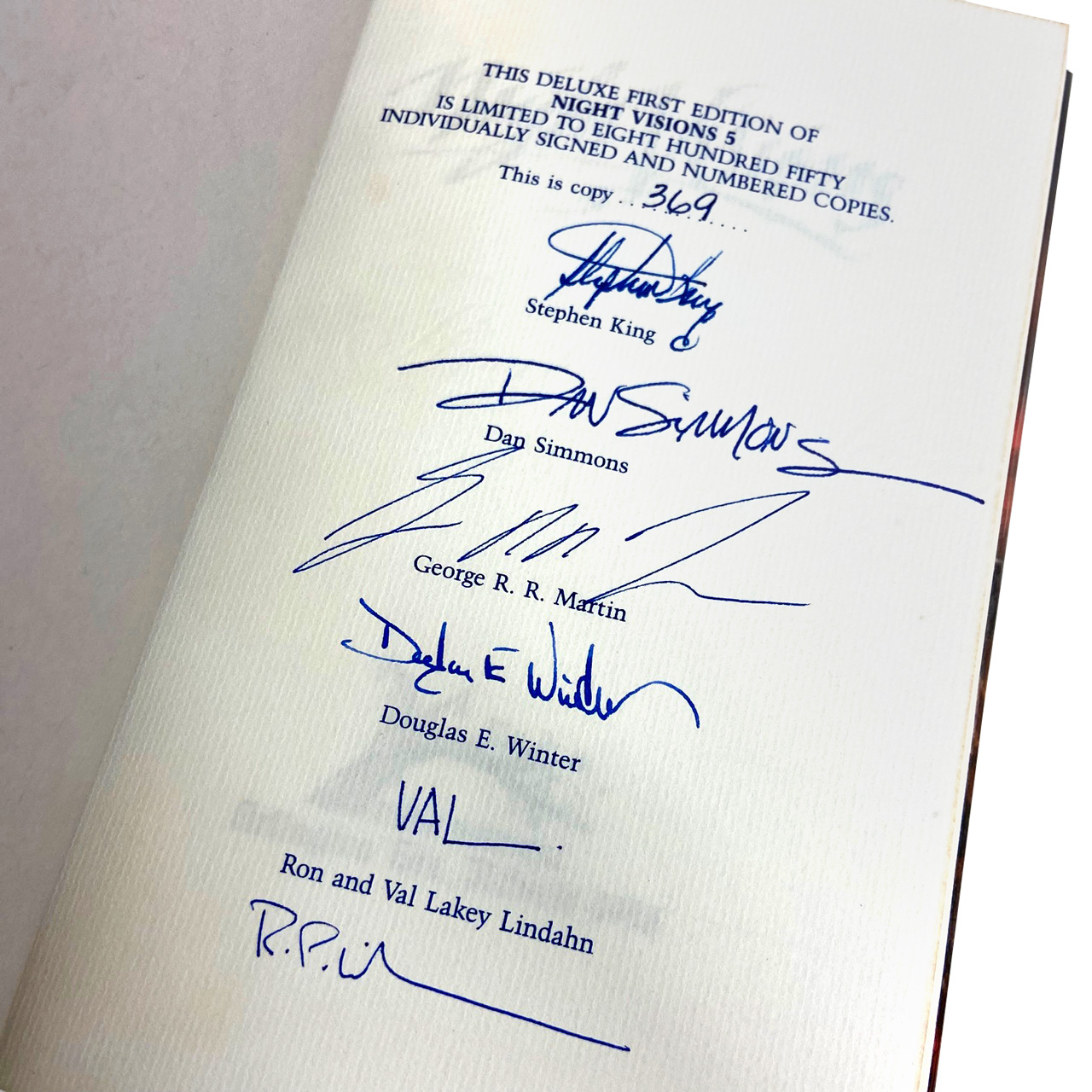 VERY FINE GUARANTEED. Very Fine book in a Very Fine- slipcase. The slipcase has two small marks near the corner. Otherwise Fine. The condition is of the highest quality without any discernible flaws. Sharp corners all around and a square spine. Unread book without any marks, writing, or stamps. The dust-jacket is protected in a brand new archival Brodart sleeve.