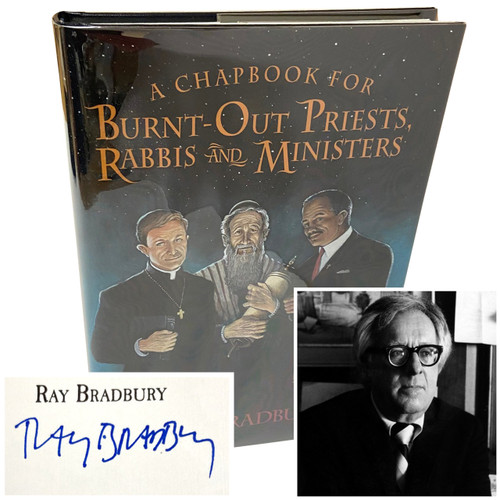 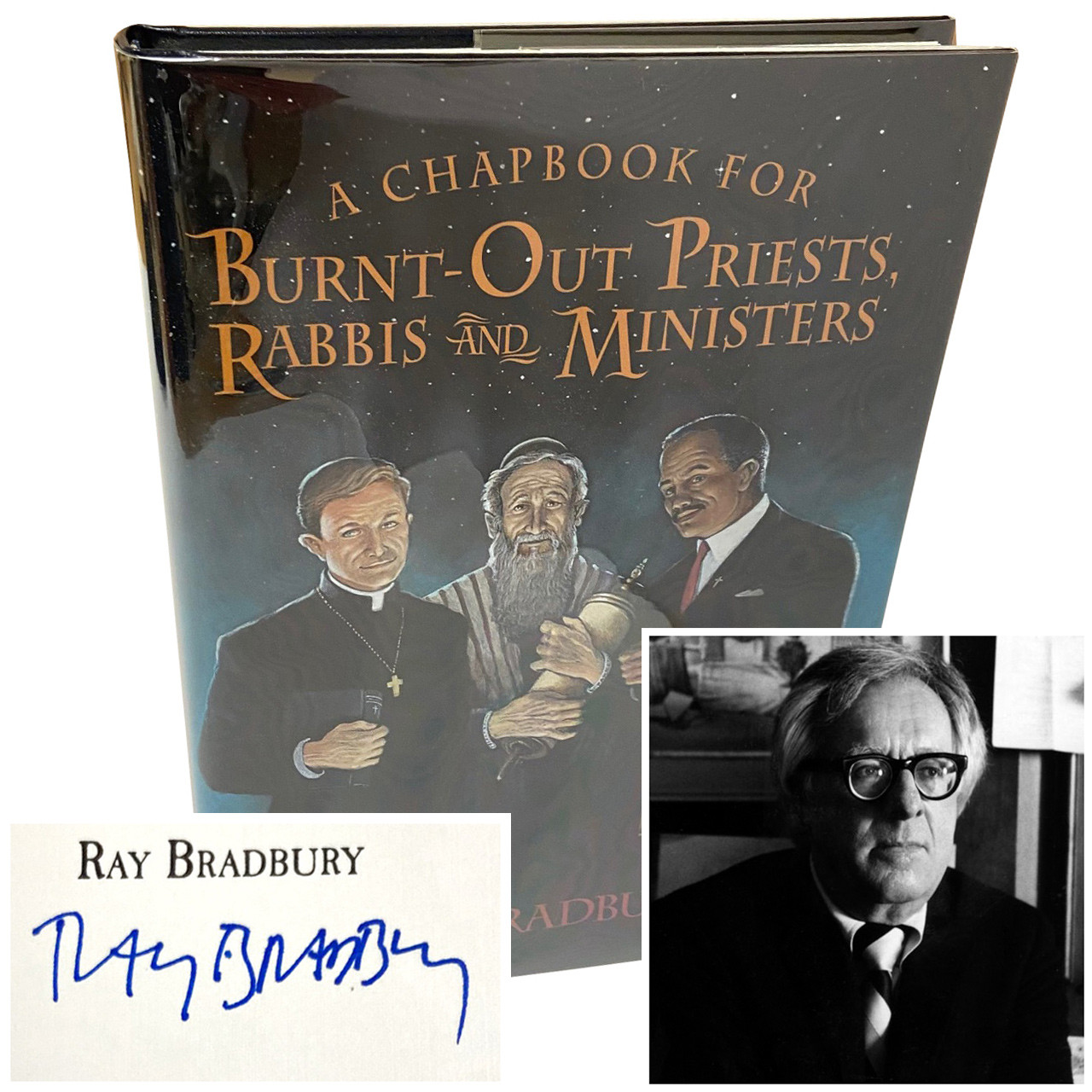 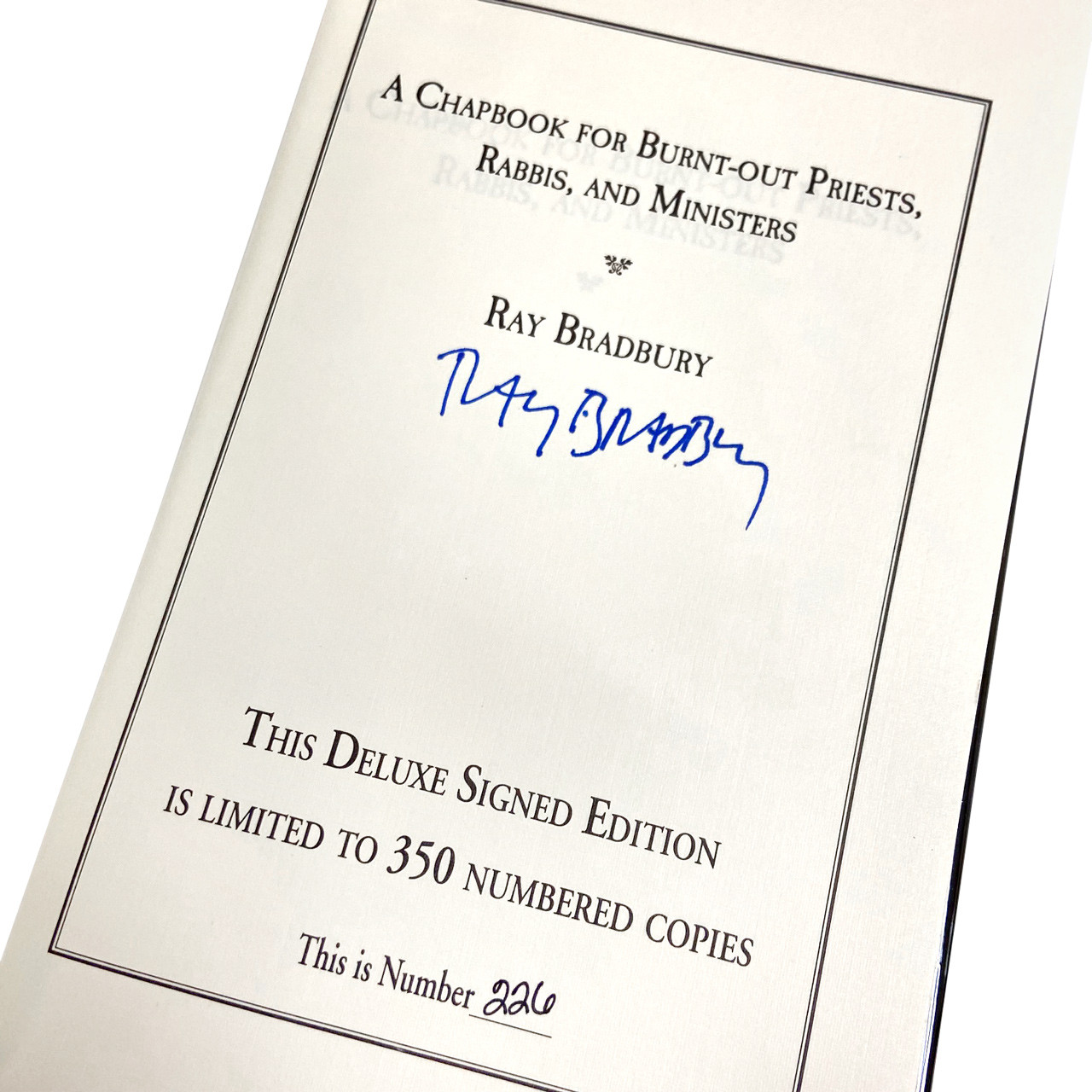 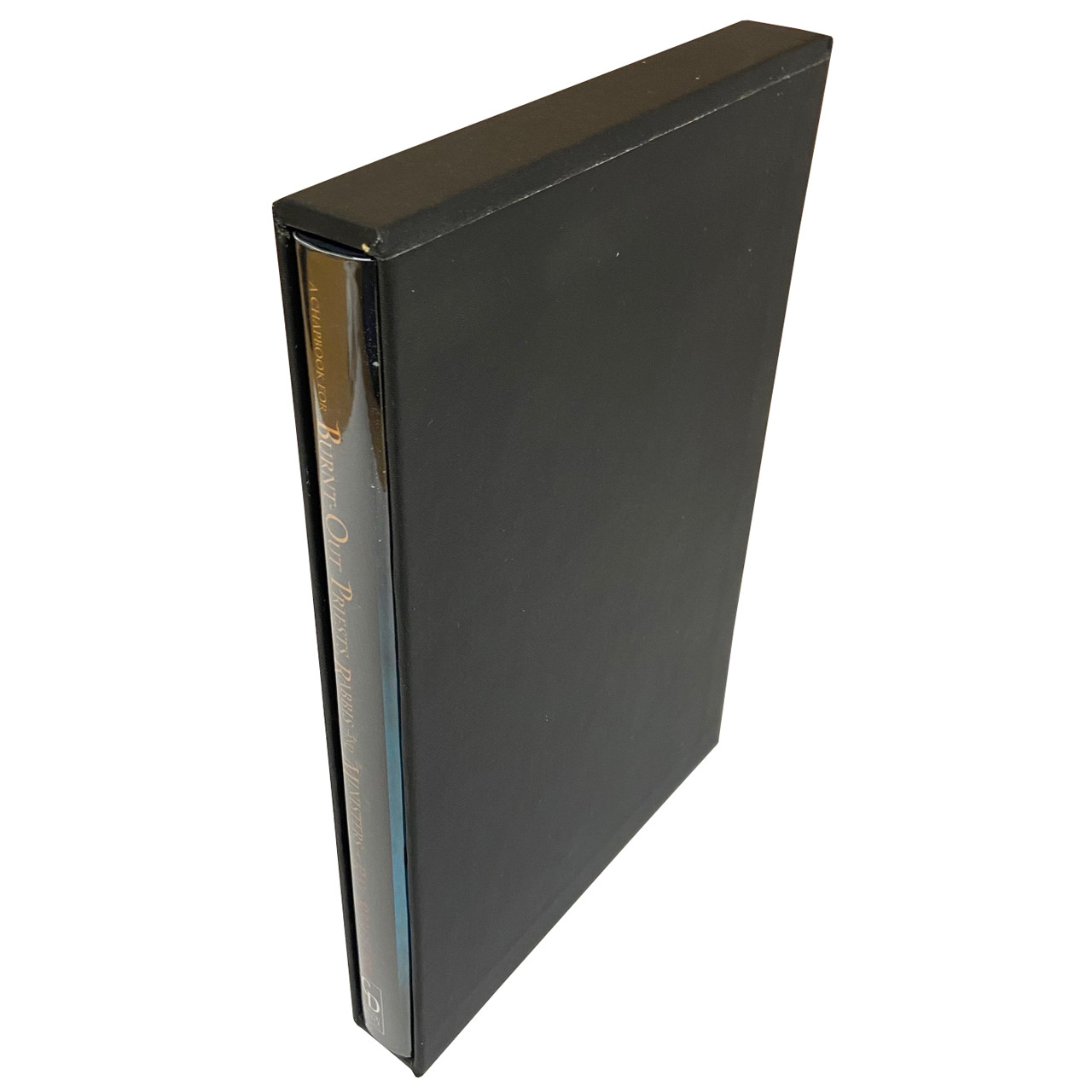 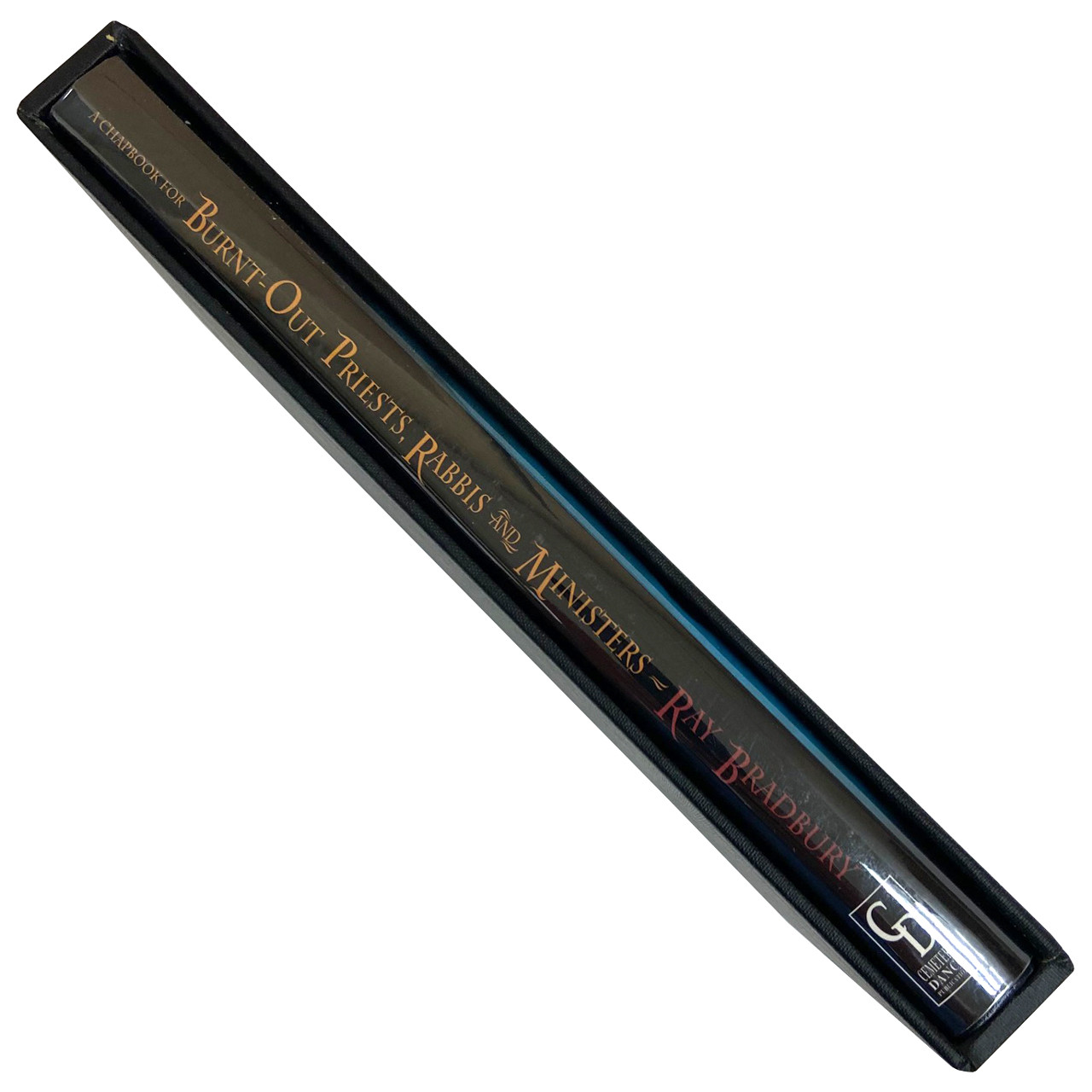 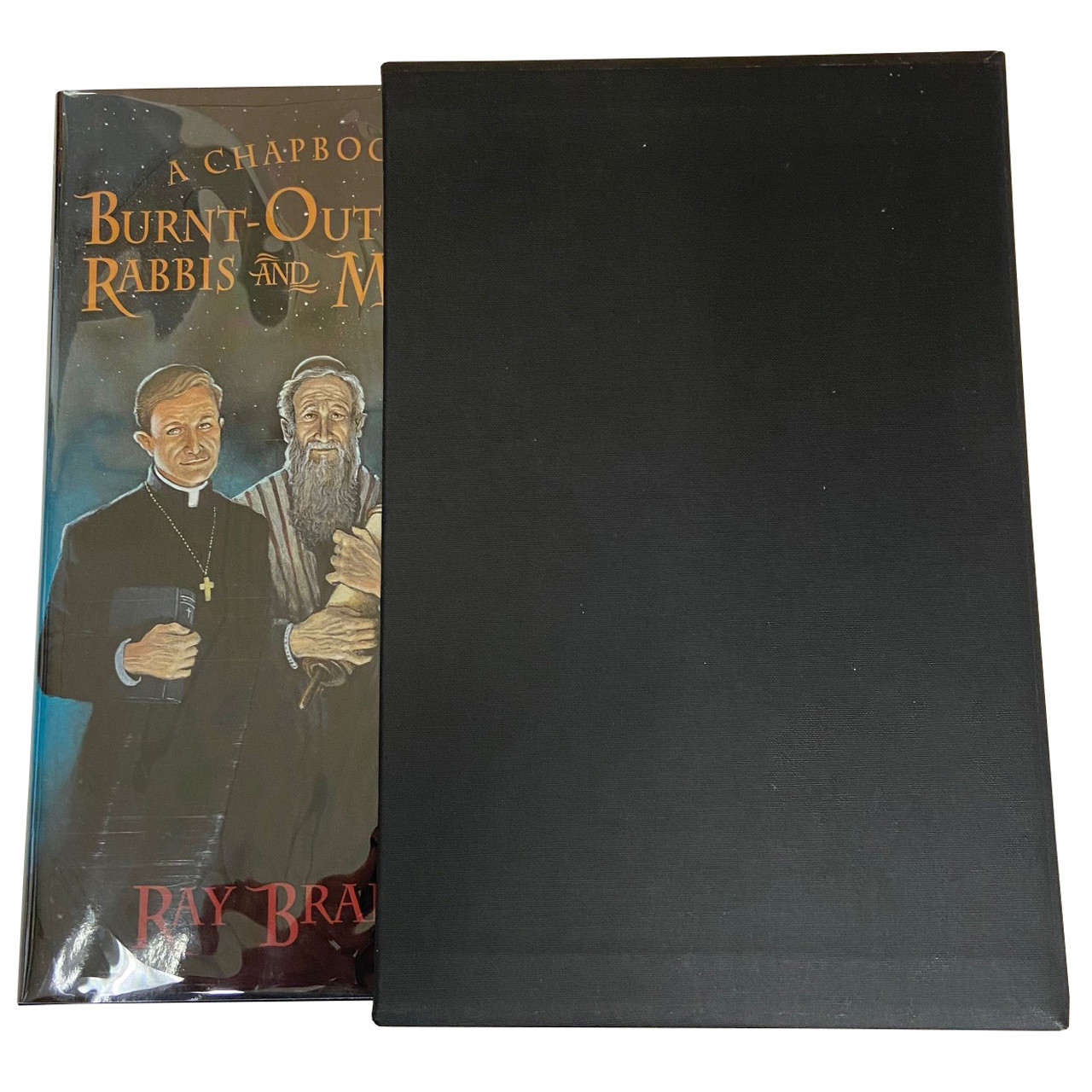 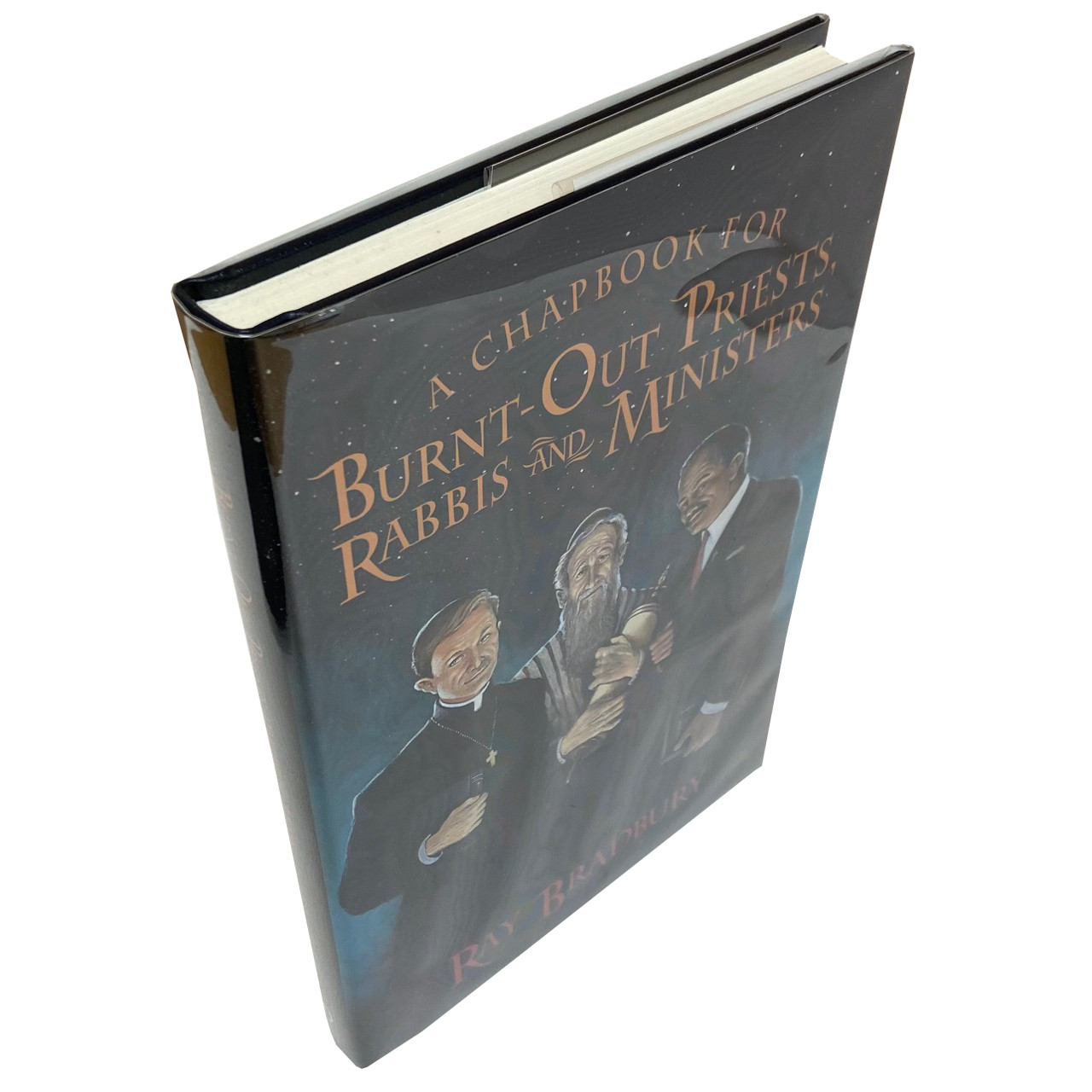 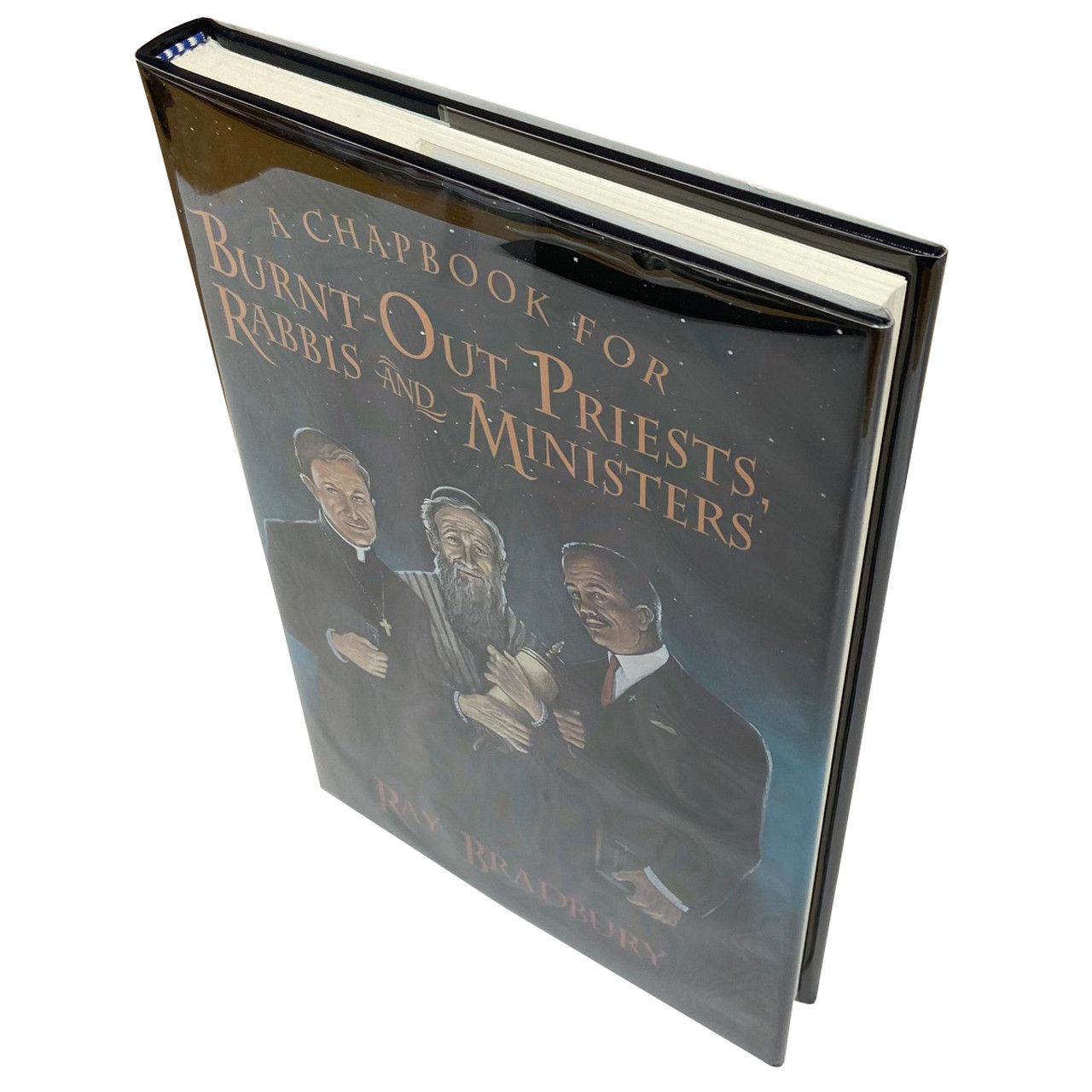 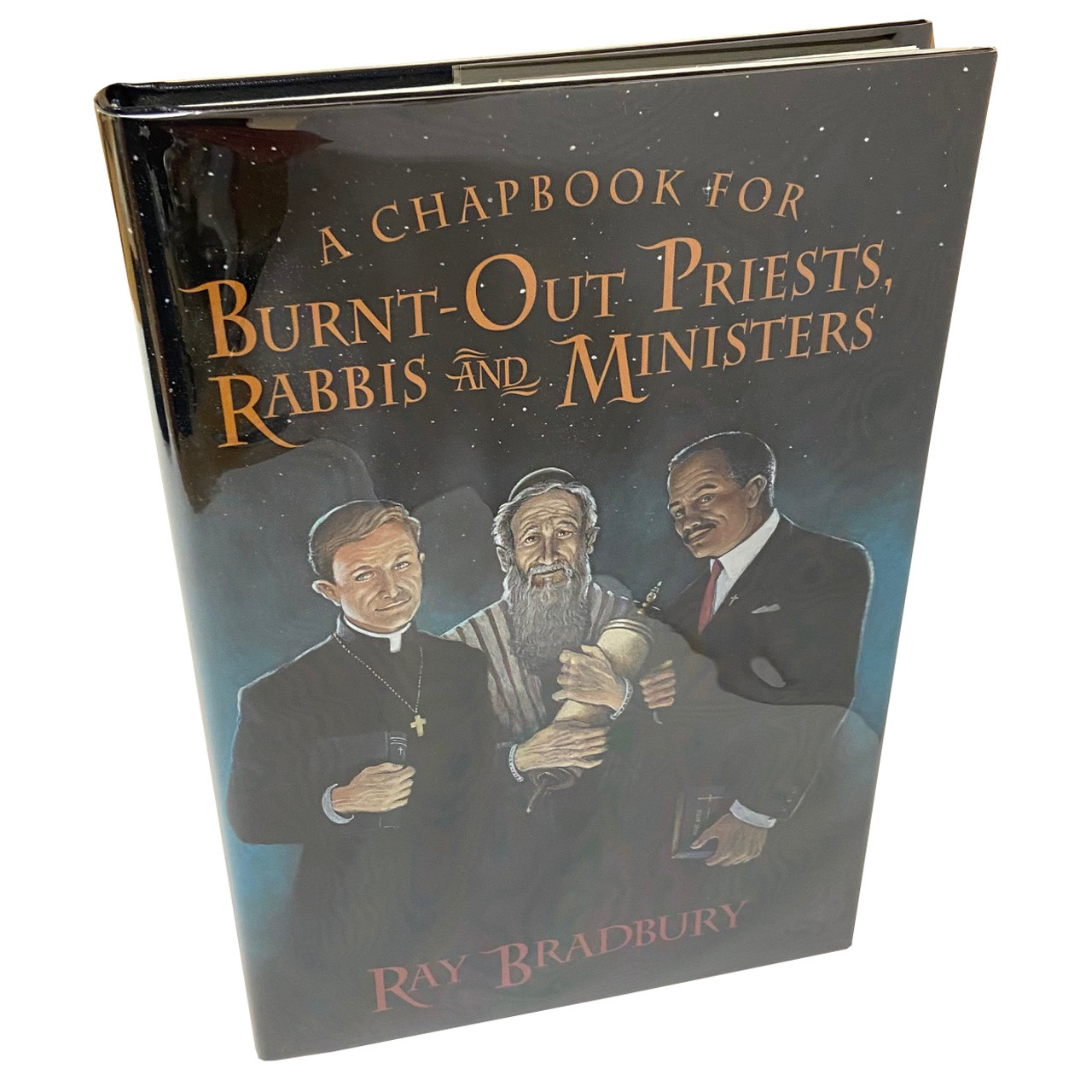 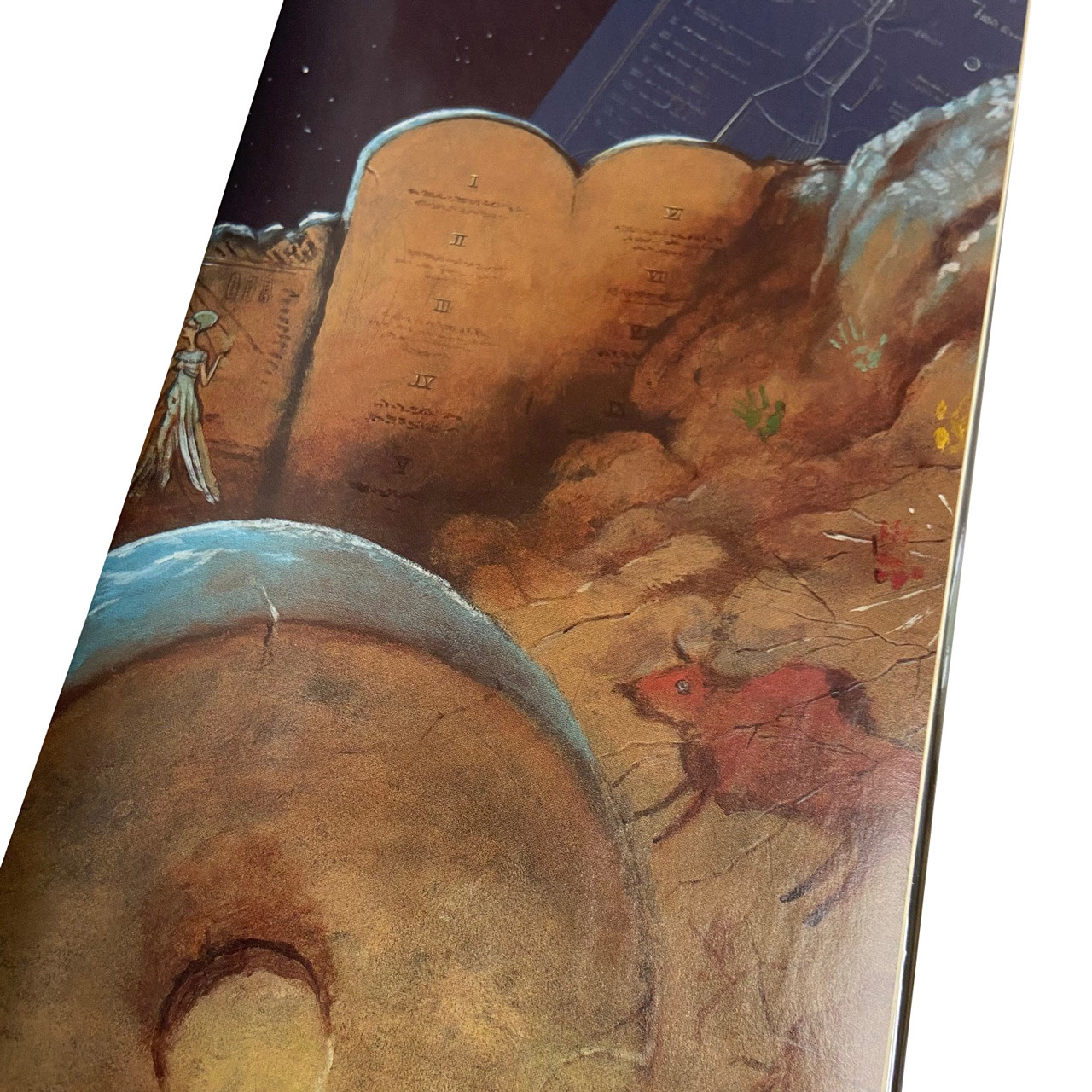 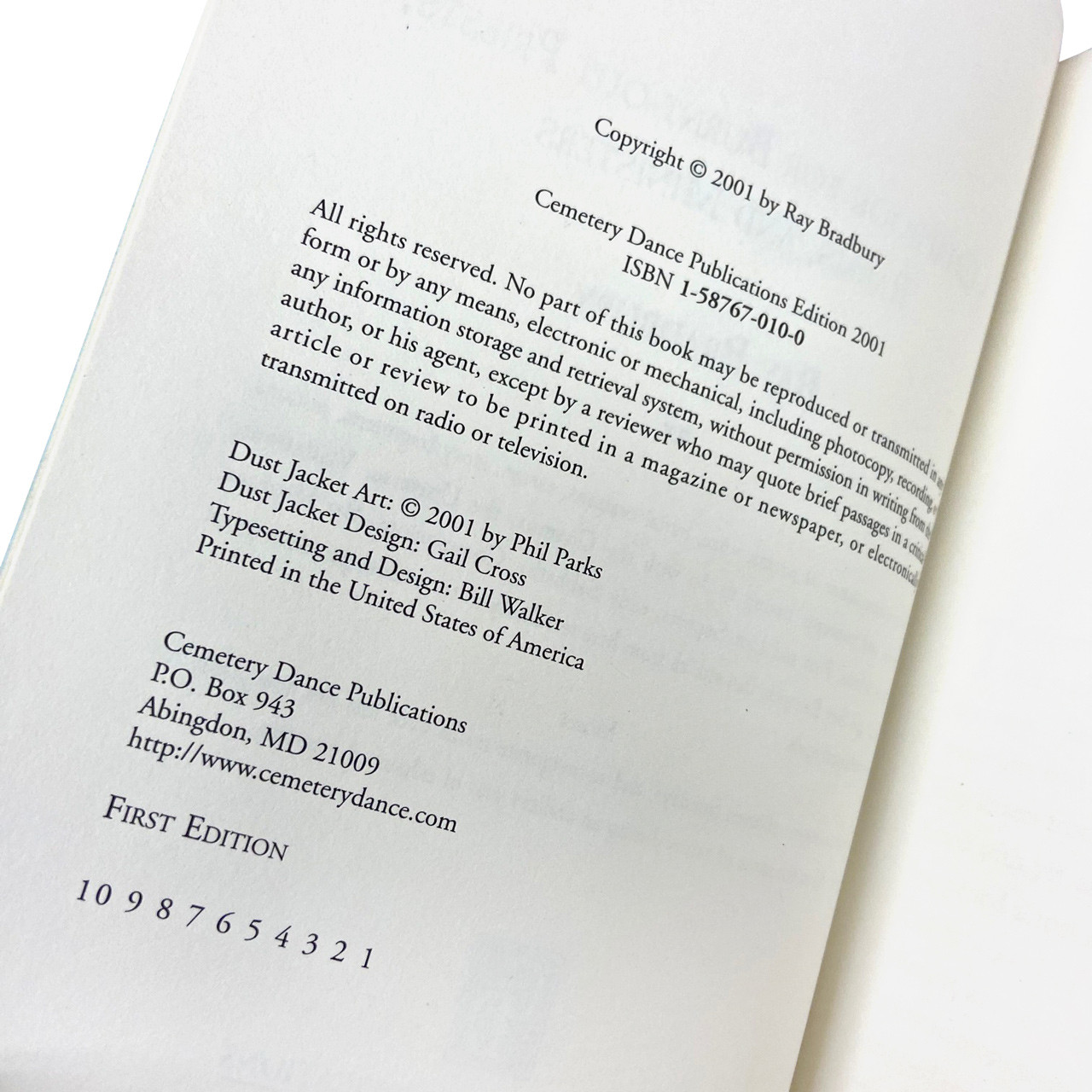 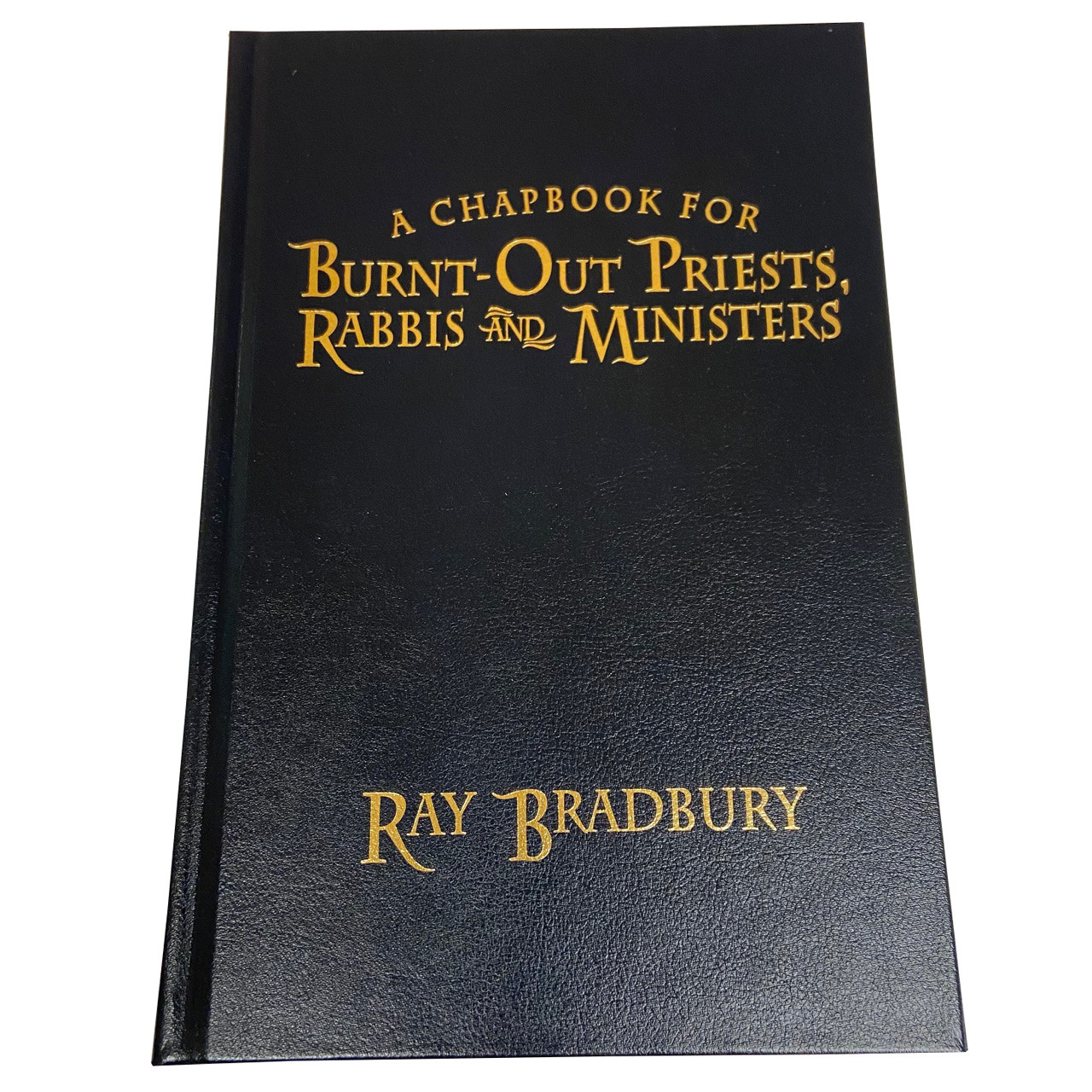 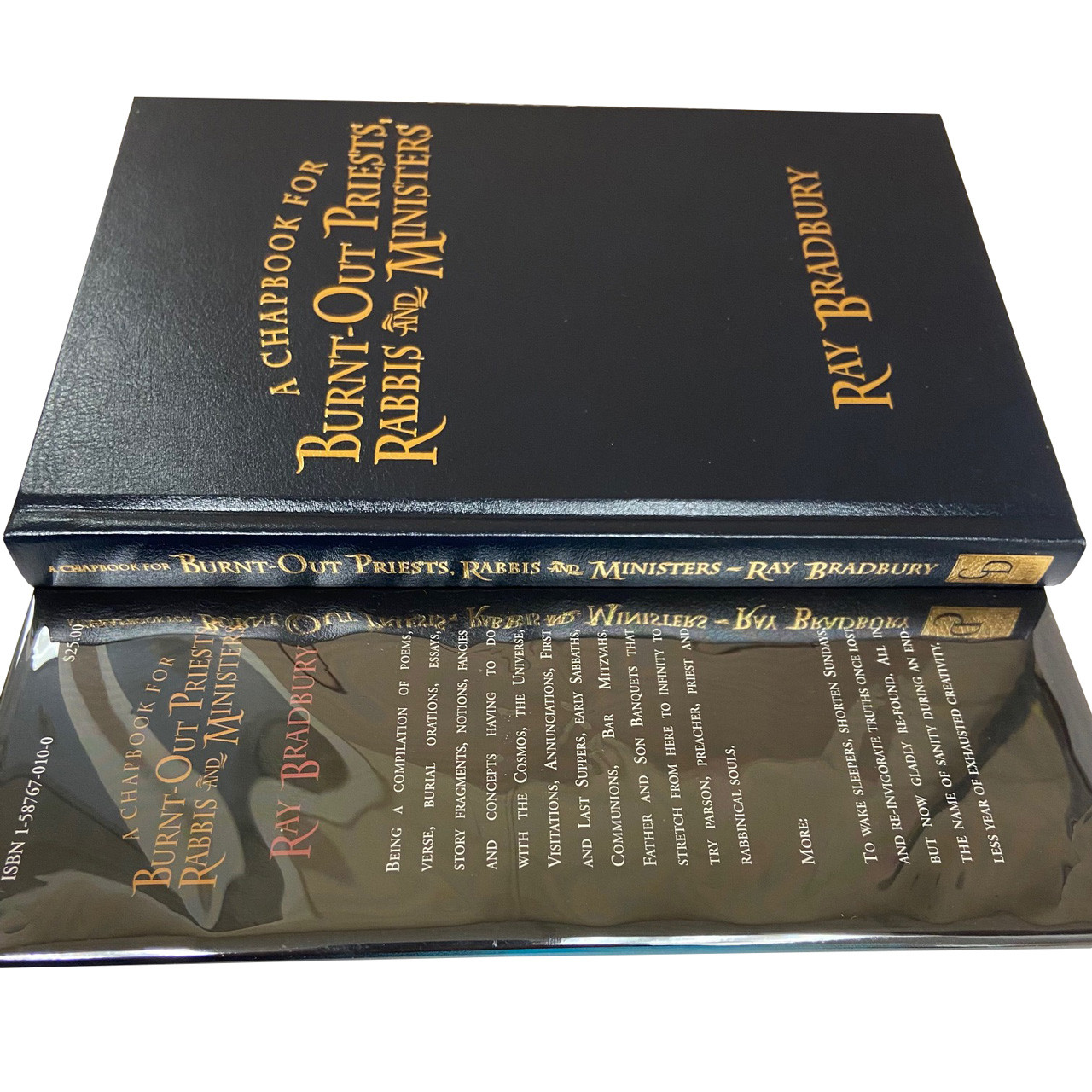 Personally signed by the great Ray Bradbury, winner of many awards, including the Grand Master Award from the Science Fiction Writers of America. 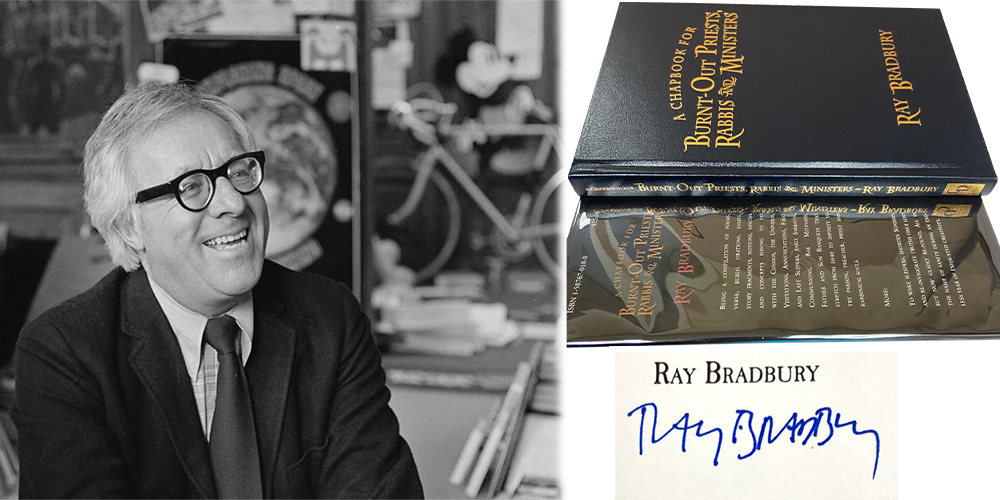 Cemetery Dance Publications 2001. Ray Bradbury "A Chapbook For Burnt-Out Priests, Rabbis, and Ministers". Signed Limited Edition No. 226 of 350. Personally signed by Ray Bradbury on special limitation page. First Edition as stated on the copyright page with the full number line from "10" to "1". Complete with the matching black slipcase. Hardcover book with dust-jacket. Not price-clipped.

THIS LISTING IS FOR STATE 2

A Chapbook for Burnt-Out Priests, Rabbis and Ministers by Ray Bradbury is a major publishing event! An exclusive, hardcover collection containing new poetry, fiction, essays, and other oddities and fancies. A stunning and thought-provoking volume -- just in time for the new century -- featuring classic Bradbury creations, all having to do with the Cosmos, the Universe, Visitations, Annunciations, First and Last Suppers, early Sabbaths and much, much more. This Cemetery Dance Publications edition is the only edition available anywhere in the world!

For Bradbury enthusiasts, religionists and nearly everyone else, here's a delightful scrapbook of poems and essays, familiar summations but no less vital from a brilliant young fantasist grown older but not old. A "fallen-away Baptist," Bradbury has found a faith localized in a man-centered universe. Without recourse to the stylistic mannerisms that have made him prey to parody throughout his long career, he preaches with heartfelt urgency a return to space as an antidote to war. In essays he reimagines his lifelong idols, George Bernard Shaw and Herman Melville (GBS as a potential fan of Singing in the Rain, the "only science fiction musical film"; Ishmael as space voyager). His poems, the bulk in free verse, are no less exhilarating and infectious. One opens with an "apeman" sketching "science fictions" on cave walls while another addresses the modern "dichotomy" between Einstein and Christ ("Try this for size;/ A bit of both?"). There is humor, insightful in "Eccentrics Must Truly Have Loved God. They Made So Many of Him" and playful in "Has Anyone Ever Seen Anyone Reading in the Christian Science Reading Rooms?" (He concludes with a poignant image of the ghost of "Mary Baker eddying/ In pools of liquid ectoplasm.../ Reading her own stuff.") Bradbury hails Shaw: "GBS!" The future will add: "Ray!" (Apr.)Forecast: Bradbury, honored at last year's National Book Awards, won't lure many mainstream poetry readers, but fans who have been disappointed by the weakness of his more recent work may batten on to this unusual volume.
Copyright 2001 Cahners Business Information, Inc.

Bradbury was mainly known for his novel Fahrenheit 451 (1953) and his short-story collections The Martian Chronicles (1950) and The Illustrated Man (1951). Most of his best known work is speculative fiction, but he also worked in other genres, such as the coming of age novel Dandelion Wine (1957) and the fictionalized memoir Green Shadows, White Whale (1992). He also wrote and consulted on screenplays and television scripts, including Moby Dick and It Came from Outer Space. Many of his works were adapted into television and film productions as well as comic books.

VERY FINE GUARANTEED. A wonderful bright clean copy free of any markings, writings, or stamps. Sharp corners that are not bumped. Tight and square spine. Unread book. No attached bookplates or indication of any removed. Photos of actual book.

Personally signed by Ray Bradbury and Allois Slipcased Limited Edition of only 50 produced!   The Fall of the House of Usher by Edgar Allan Poe Usher II by Ray Bradbury Gauntlet Publication...