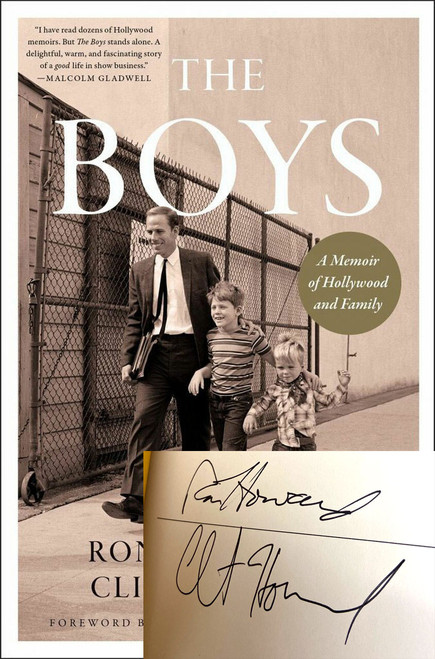 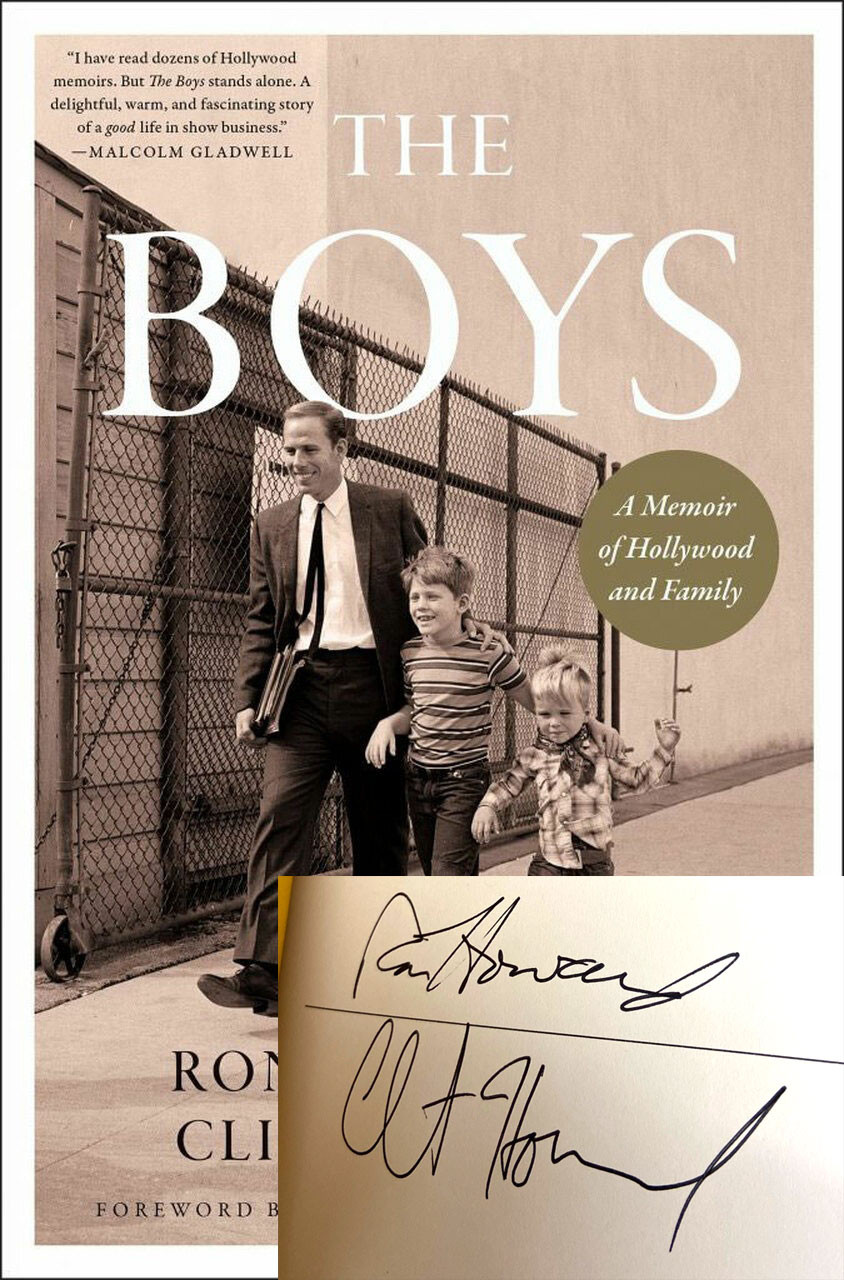 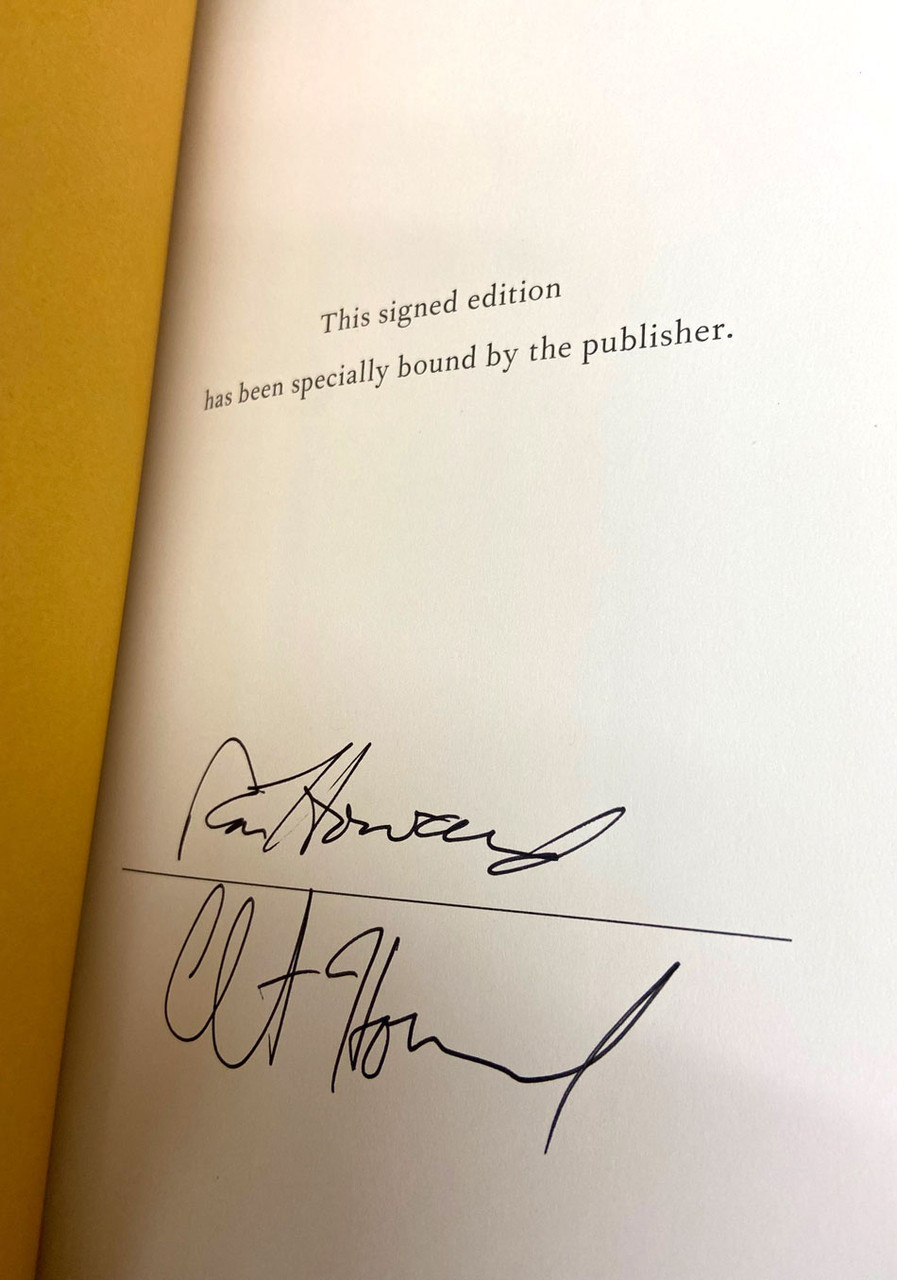 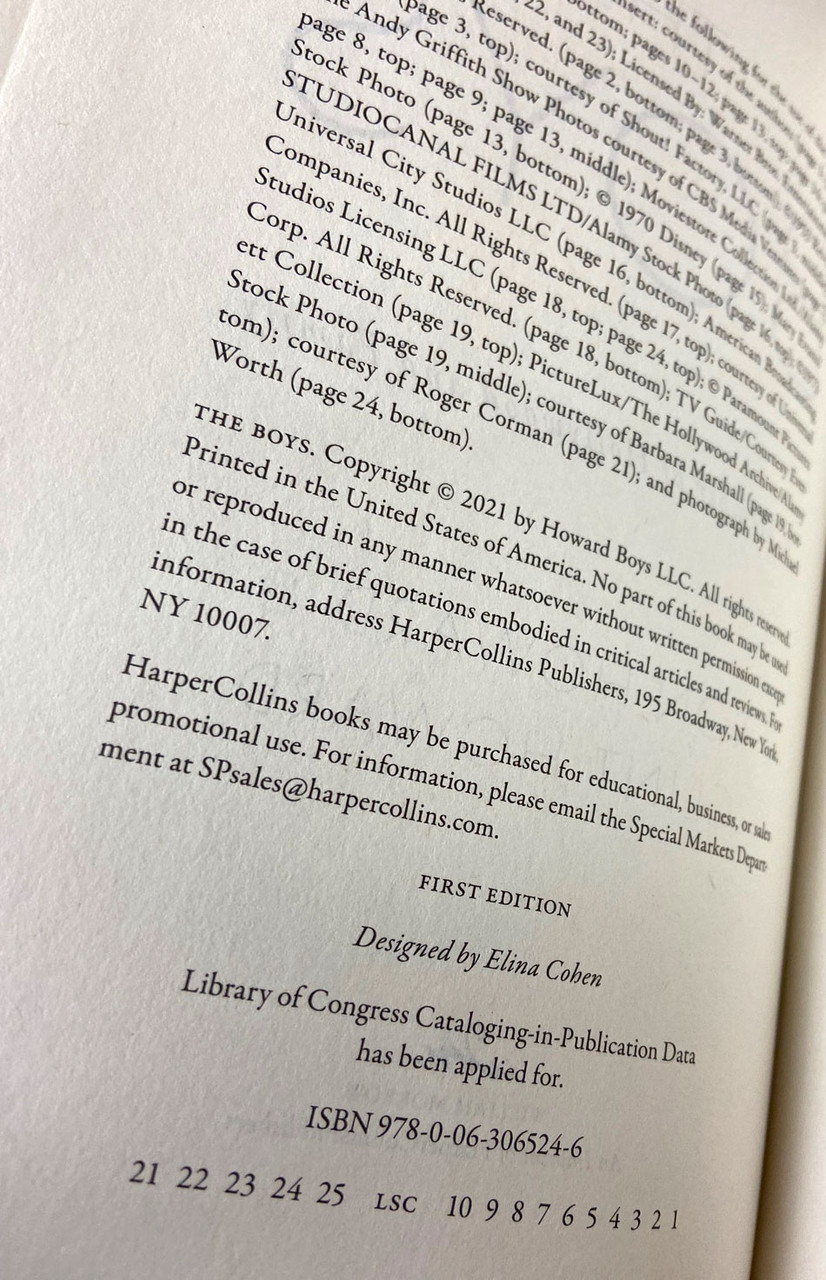 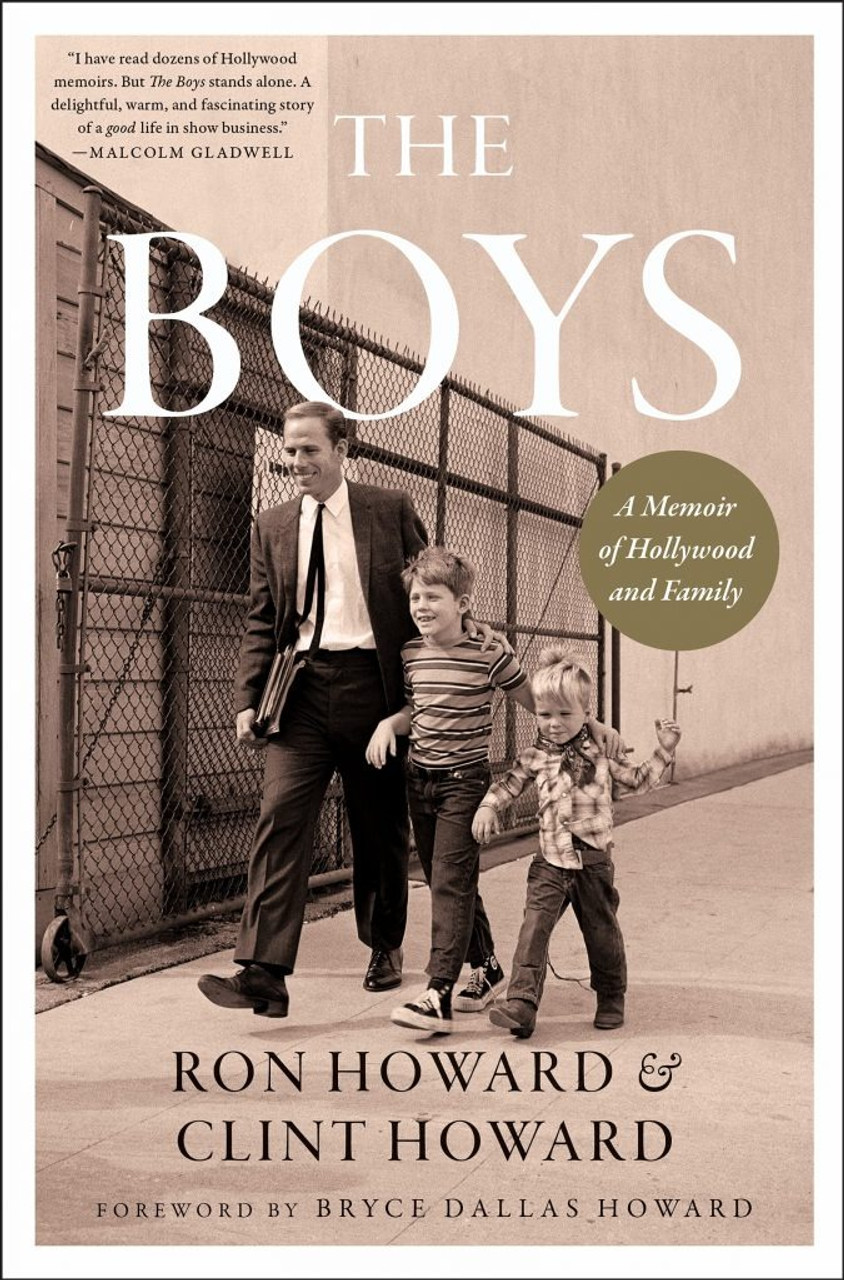 Personally signed by Ron Howard, Academy Award-winning filmmaker and one of his generation’s most popular directors. 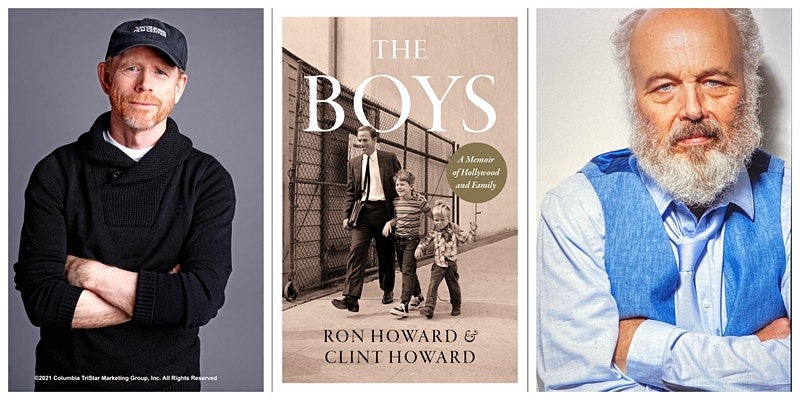 Academy Award-winning filmmaker Ron Howard is one of his generation’s most popular directors. From the critically acclaimed dramas A Beautiful Mind, Frost/Nixon, Rush, and Apollo 13 to the hit comedies Parenthood and Splash, he has created some of Hollywood’s most memorable films. Howard made his directorial debut in 1977 with Grand Theft Auto. He began his career in film as an actor, performing in The Journey when he was four years old. He also starred in The Music Man, the long-running television series The Andy Griffith Show and Happy Days, and in the film American Graffiti. His most recent films as a director are Hillbilly Elegy and the upcoming Thirteen Lives.

Clint Howard is a character actor and the younger brother of filmmaker Ron Howard. He began his acting career at the age of three when he played the role of Leon on The Andy Griffith Show. He starred opposite the titular bear in the popular late-’60s CBS television series Gentle Ben, and has gone on to act in countless TV shows and films over the years. Among his credits are Star Trek in virtually all of its incarnations, Apollo 13, Seinfeld, Rock ’n’ Roll High School, Arrested Development, The Waterboy, and many horror films.

“What was it like to grow up on TV?” Ron Howard has been asked this question throughout his adult life. in The Boys, he and his younger brother, Clint, examine their childhoods in detail for the first time. For Ron, playing Opie on The Andy Griffith Show and Richie Cunningham on Happy Days offered fame, joy, and opportunity—but also invited stress and bullying. For Clint, a fast start on such programs as Gentle Ben and Star Trek petered out in adolescence, with some tough consequences and lessons.

With the perspective of time and success—Ron as a filmmaker, producer, and Hollywood A-lister, Clint as a busy character actor—the Howard brothers delve deep into an upbringing that seemed normal to them yet was anything but. Their Midwestern parents, Rance and Jean, moved to California to pursue their own showbiz dreams. But it was their young sons who found steady employment as actors. Rance put aside his ego and ambition to become Ron and Clint’s teacher, sage, and moral compass. Jean became their loving protector—sometimes over-protector—from the snares and traps of Hollywood.

By turns confessional, nostalgic, heartwarming, and harrowing, THE BOYS is a dual narrative that lifts the lid on the Howard brothers’ closely held lives. It’s the journey of a tight four-person family unit that held fast in an unforgiving business and of two brothers who survived “child-actor syndrome” to become fulfilled adults.

“Who would have thought Ron Howard could be exciting? And yet, he and his brother Clint have written a saga of talent, ambition, serendipity, and lust. Well, forget about the lust. It’s just not there. But Ron and Clint’s story of their remarkable coming-of-age in show business will thrill any reader.” -- Steve Martin

"I have read dozens of Hollywood memoirs. But The Boys stands alone. A delightful, warm and fascinating story of a good life in show business.” -- Malcolm Gladwell

“I’ve known and loved the Howard family for forty-eight years, and there are stories here that surprised even me. The Boys is an emotional journey that goes well beyond your typical Hollywood memoir.” -- Henry Winkler

Ronald William Howard (born March 1, 1954) is an American film director, producer, and actor. Howard first came to prominence as a child actor, guest-starring in several television series, including an episode of The Twilight Zone. He gained national attention for playing young Opie Taylor, the son of Sheriff Andy Taylor (played by Andy Griffith) in the sitcom The Andy Griffith Show from 1960 through 1968. During this time, he also appeared in the musical film The Music Man (1962), a critical and commercial success. He was credited as Ronny Howard in his film and television appearances from 1959 to 1973. Howard was cast in one of the lead roles in the coming-of-age film American Graffiti (1973), and became a household name for playing Richie Cunningham in the sitcom Happy Days, a role he would play from 1974 to 1980.

In 1980, Howard left Happy Days to focus on directing, producing and sometimes writing a variety of films and television series. His films included the comedies Night Shift (1982), Splash (1984), and Cocoon (1985) as well as the fantasy Willow (1988), the thriller Backdraft (1991), and the newspaper comedy drama film The Paper (1994). In 1995, Howard gained widespread praise and recognition in the historical docudrama Apollo 13 (1995). Howard continued directing such films as the biographical drama A Beautiful Mind (2001), the biographical sports drama Cinderella Man (2005), the historical drama Frost/Nixon (2008), the biographical sports drama Rush (2013), and the historical adventure film In the Heart of the Sea (2015). Howard is also known for directing the children's fantasy film How the Grinch Stole Christmas (2000) as well as the Robert Langdon film series, The Da Vinci Code (2006), Angels & Demons (2009), and Inferno (2016). Howard also directed Solo: A Star Wars Story (2018) and the documentary films The Beatles: Eight Days a Week (2016) and Pavarotti (2019).

Howard received the Academy Award for Best Director and Academy Award for Best Picture for A Beautiful Mind and was nominated again for the same awards for Frost/Nixon. In 2003, Howard was awarded the National Medal of Arts. He was inducted into the Television Hall of Fame in 2013. Howard has two stars on the Hollywood Walk of Fame for his contributions in the television and motion pictures industries. 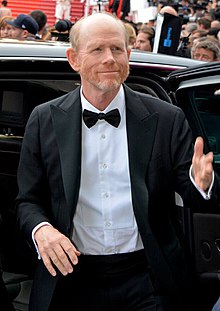 Clinton Engle Howard (born April 20, 1959) is an American actor. He is the second son born to American actors Rance and Jean Howard, and younger brother of actor and director Ron Howard. Clint has over 200 acting credits, appearing in feature films including The Waterboy and Apollo 13, as well as playing characters on television such as Mark Wedloe on Gentle Ben, Stanley on The Baileys of Balboa (1964–1965), Steve on The Cowboys (1974), and as Creepy Rodney on My Name Is Earl (2006–2008). He has appeared in many films directed by his brother, Ron, and had a small role in Walt Disney Pictures' The Jungle Book. Clint also was lead singer and frontman of his band, The Kempsters, and recently has found success in his pursuit of making custom snowglobes.

Very Fine Guaranteed. A wonderful bright clean copy without any markings, writings, or stampings. No attached bookplates or indication of any removed. A well cared for book, protected from any potential damage. Square and tight spine. Sharp corners that are not bumped.

Stephen E. Ambrose "Nothing Like It In The World" Signed First Edition, Leather Bound Collector's Edition of 1,650 w/COA [Sealed]