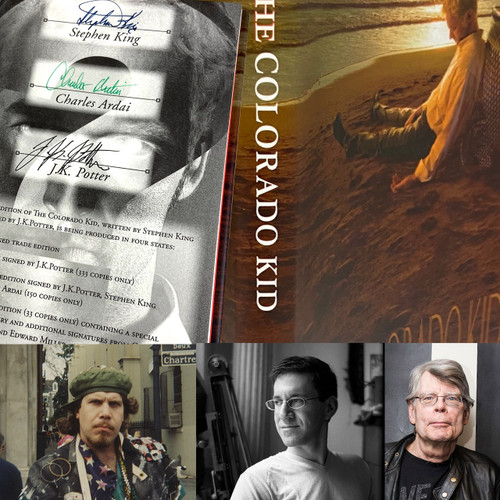 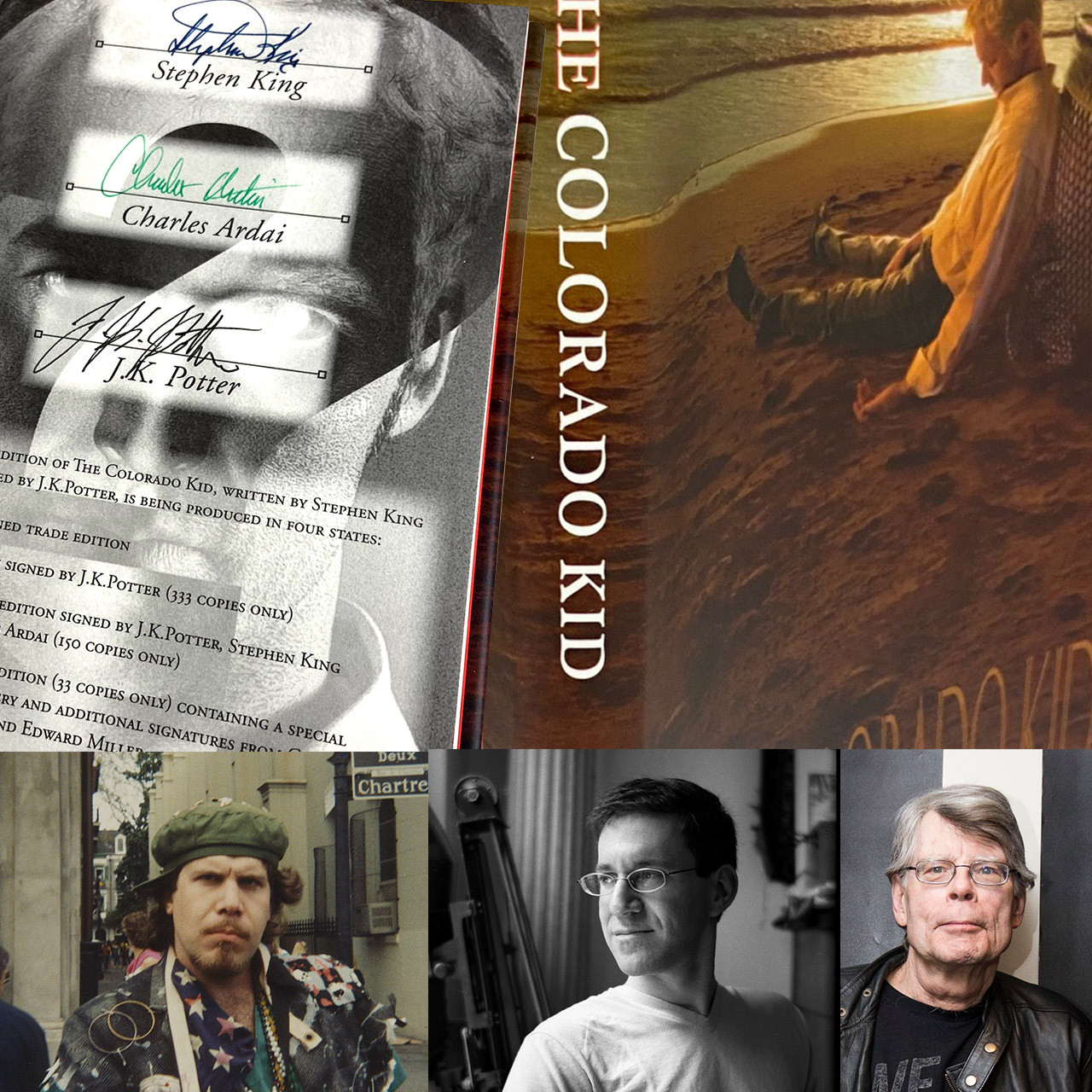 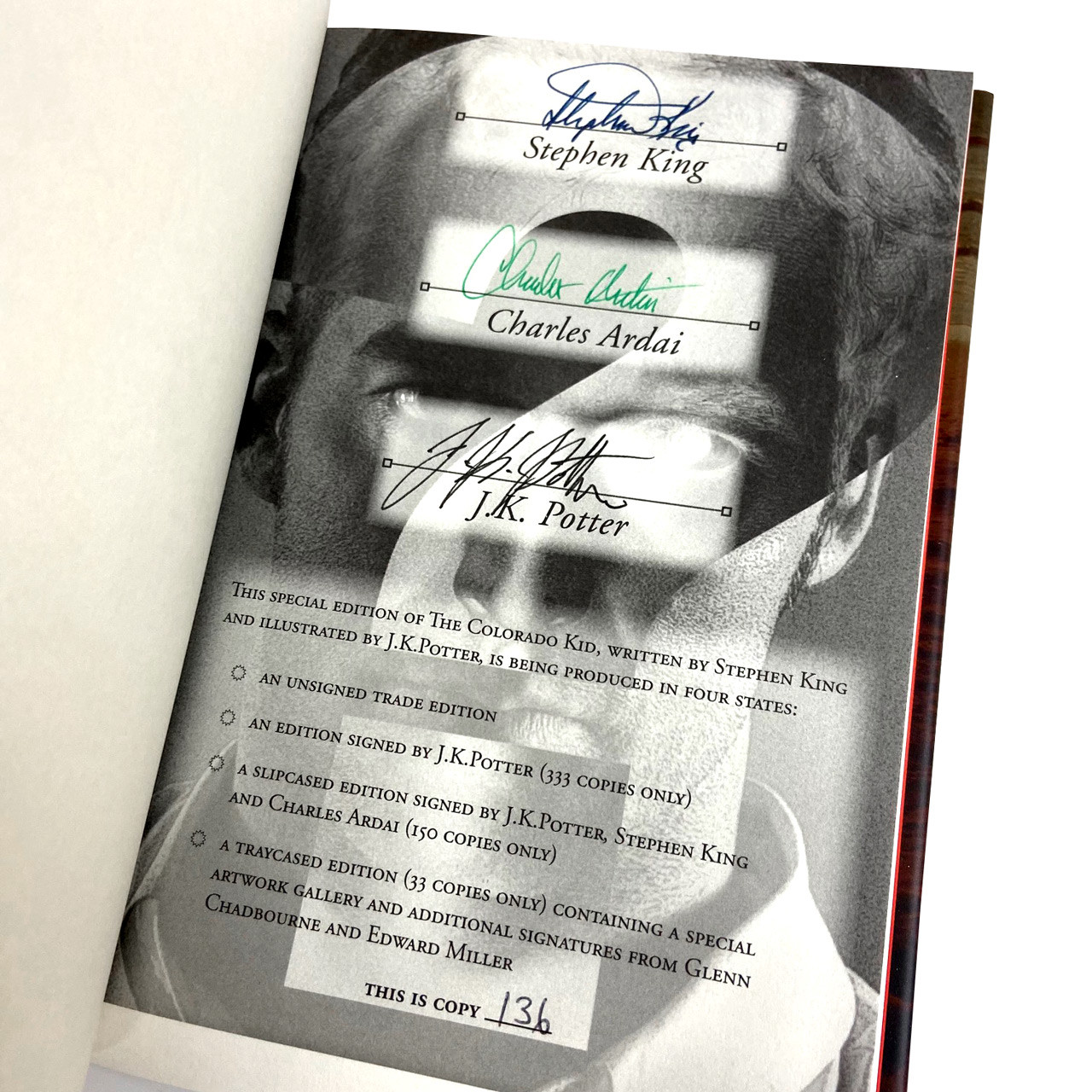 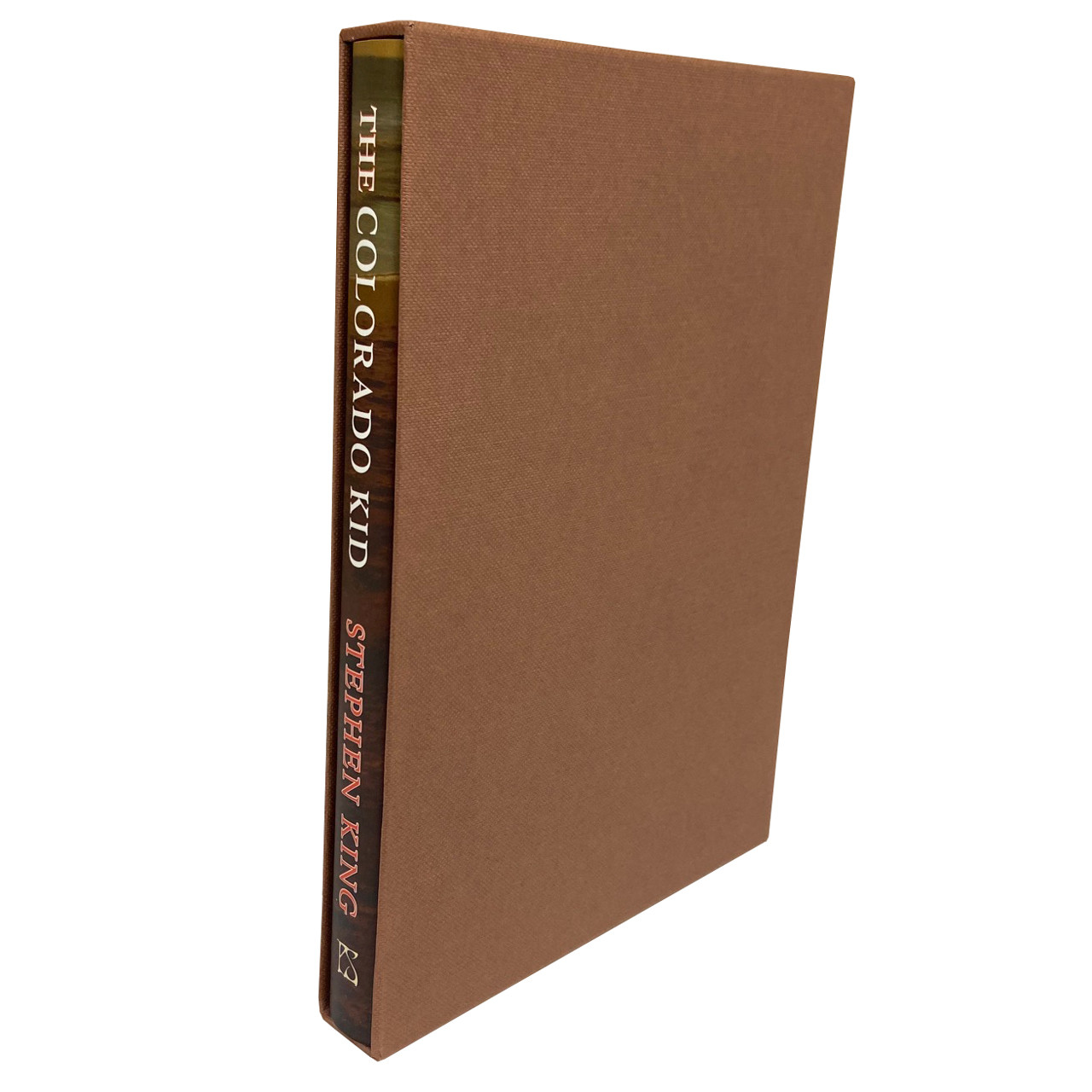 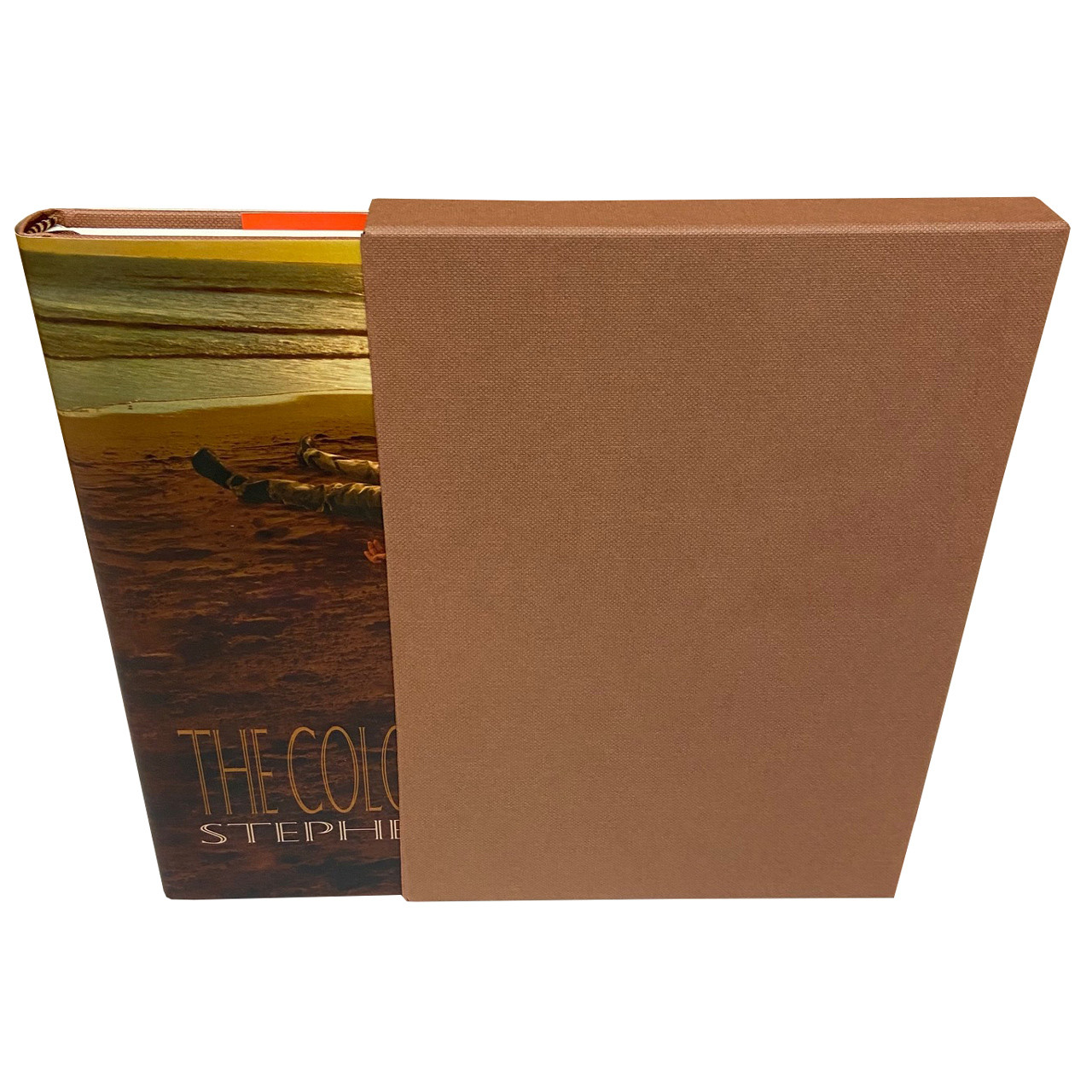 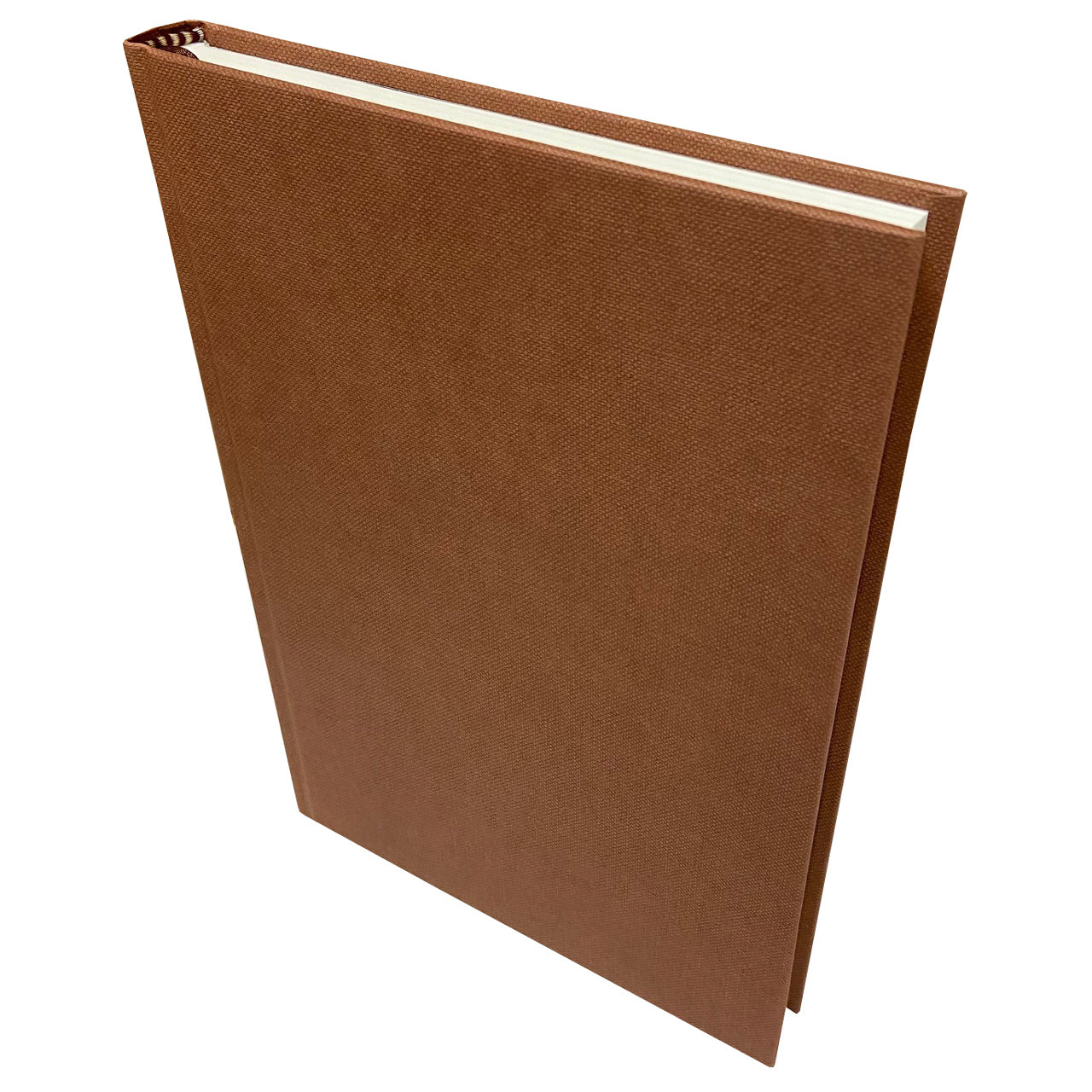 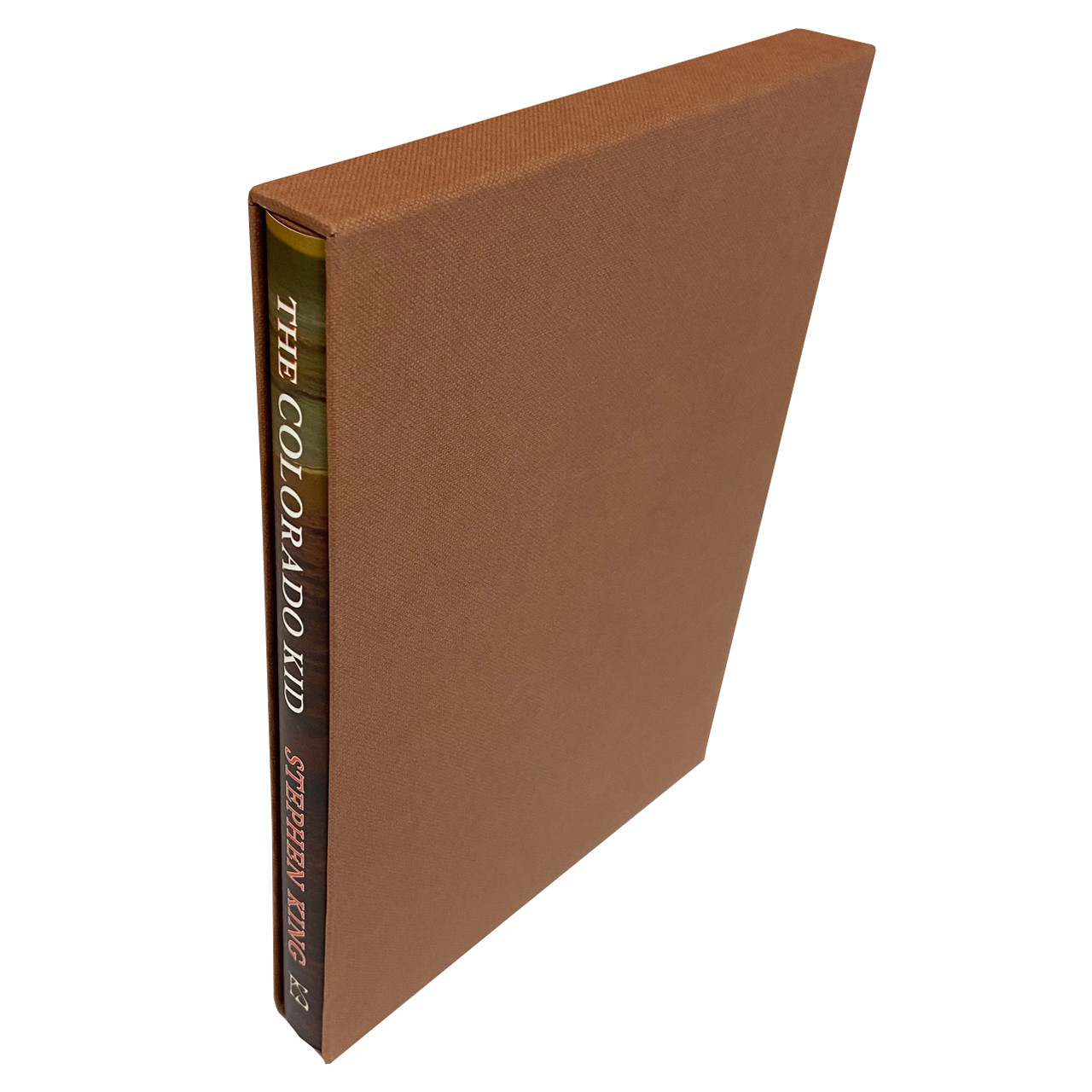 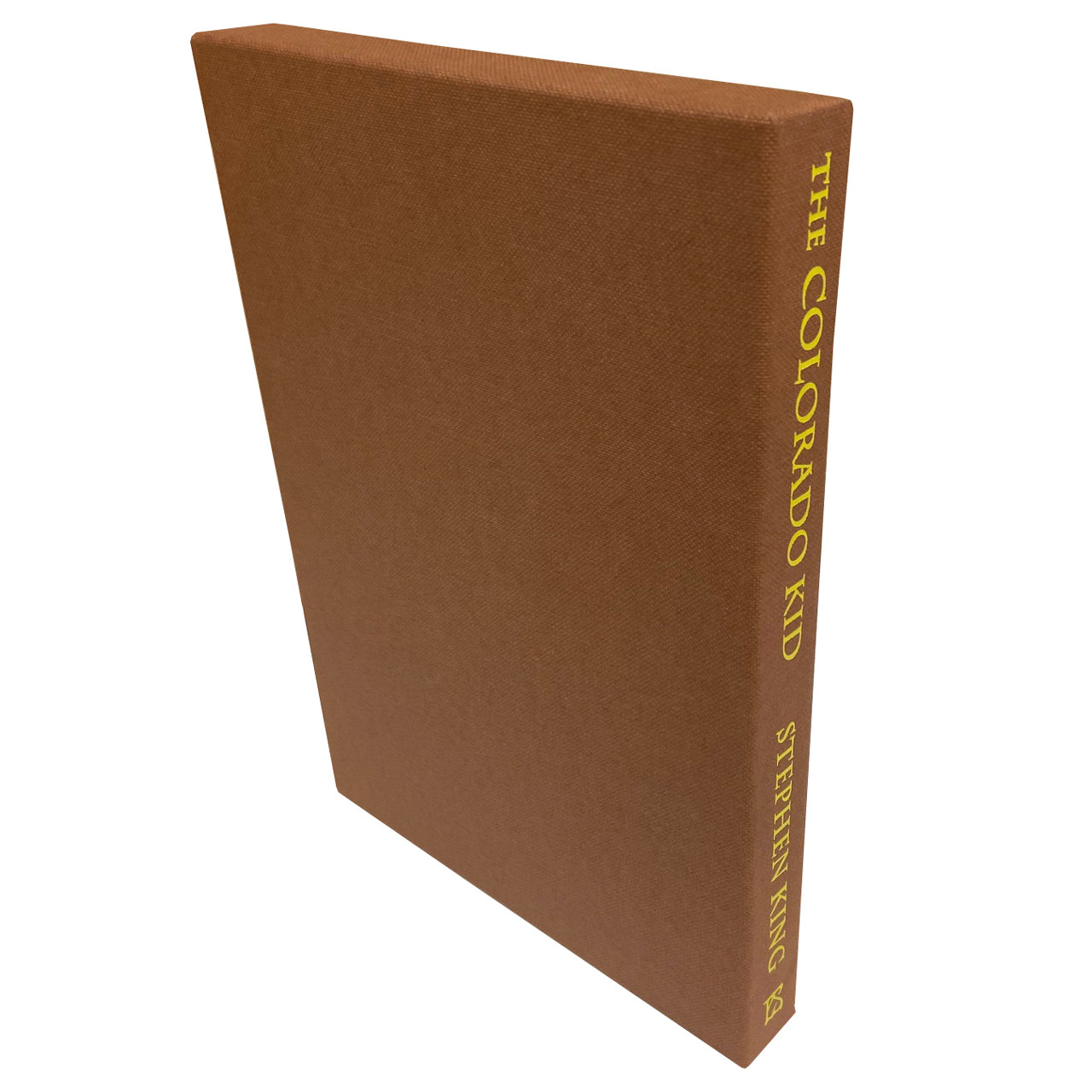 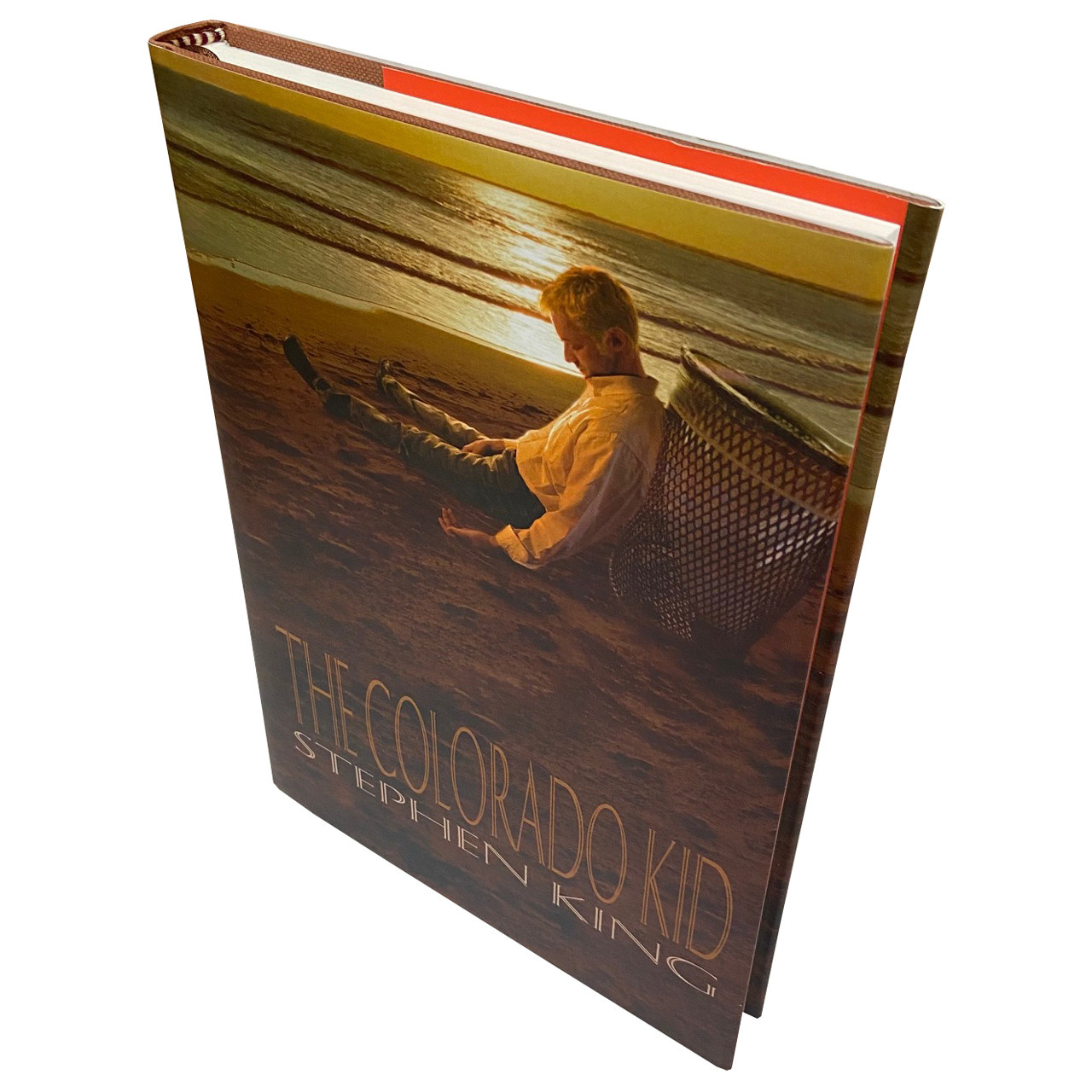 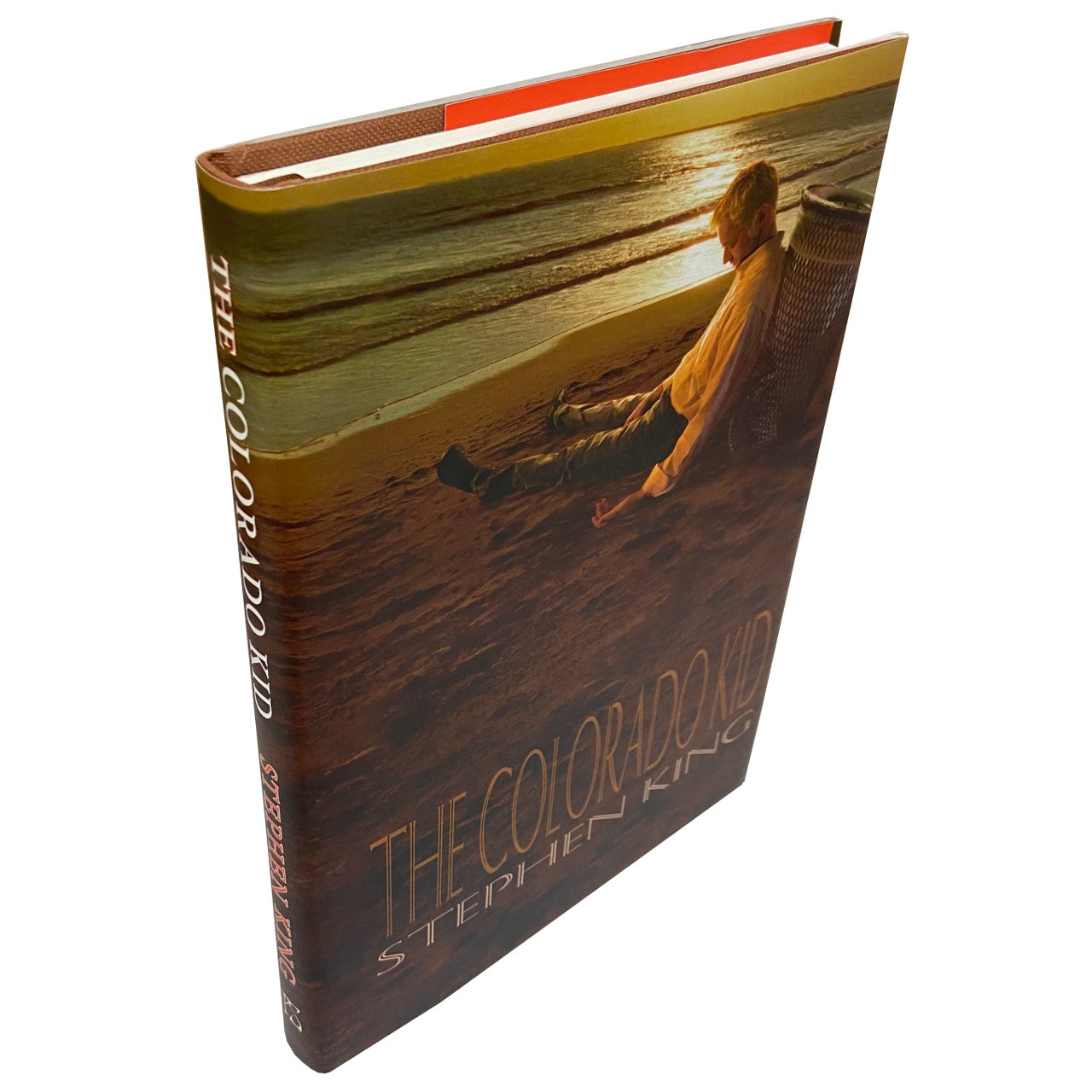 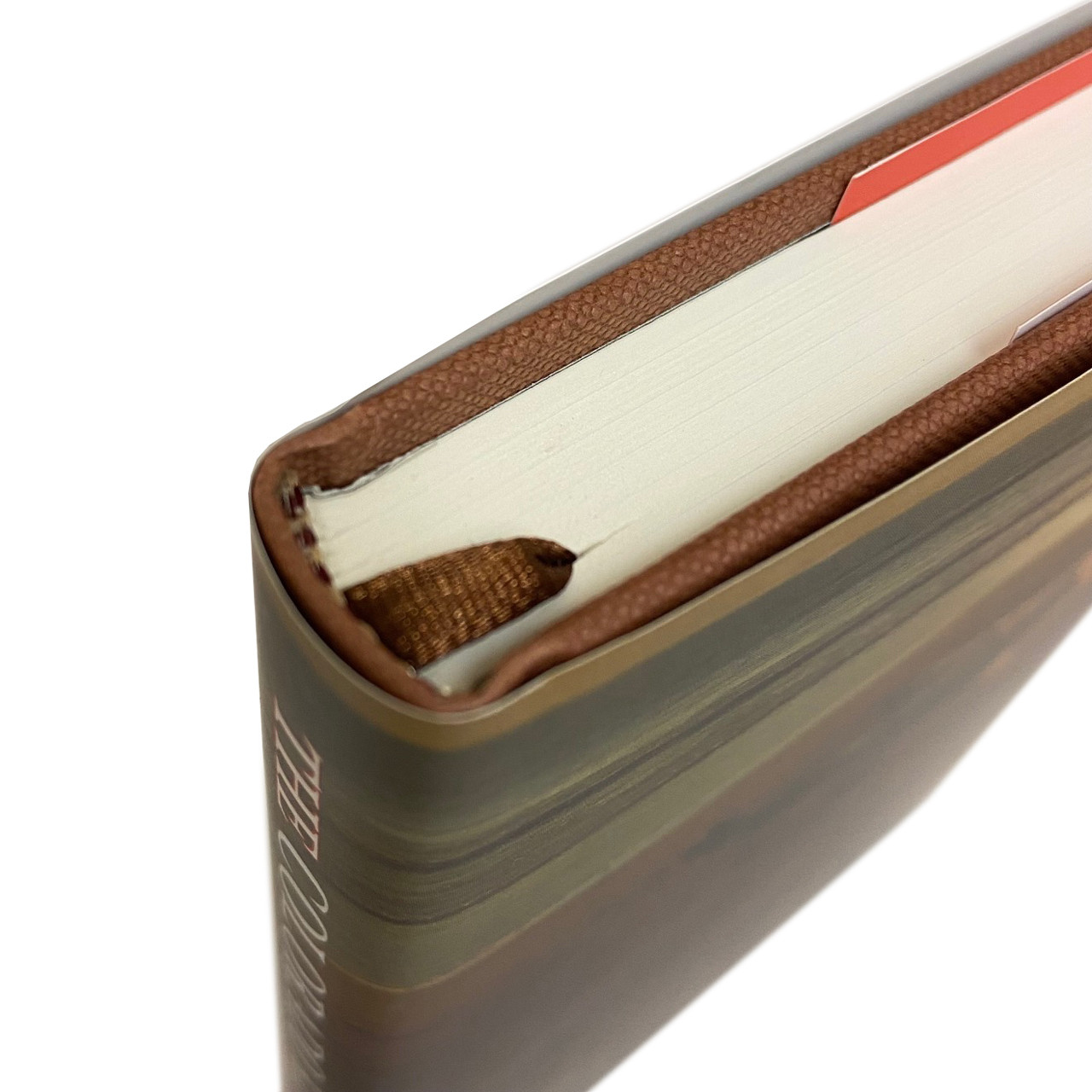 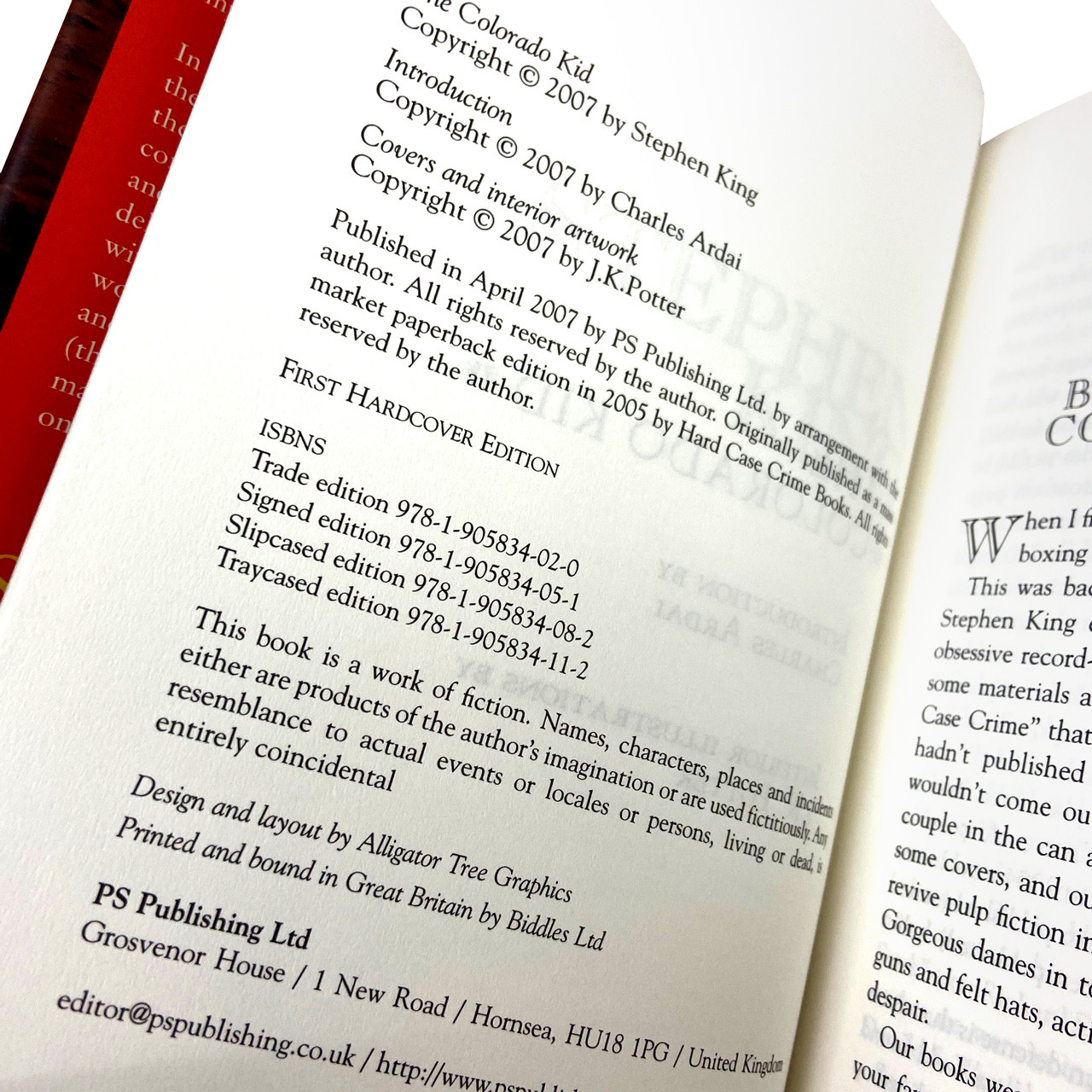 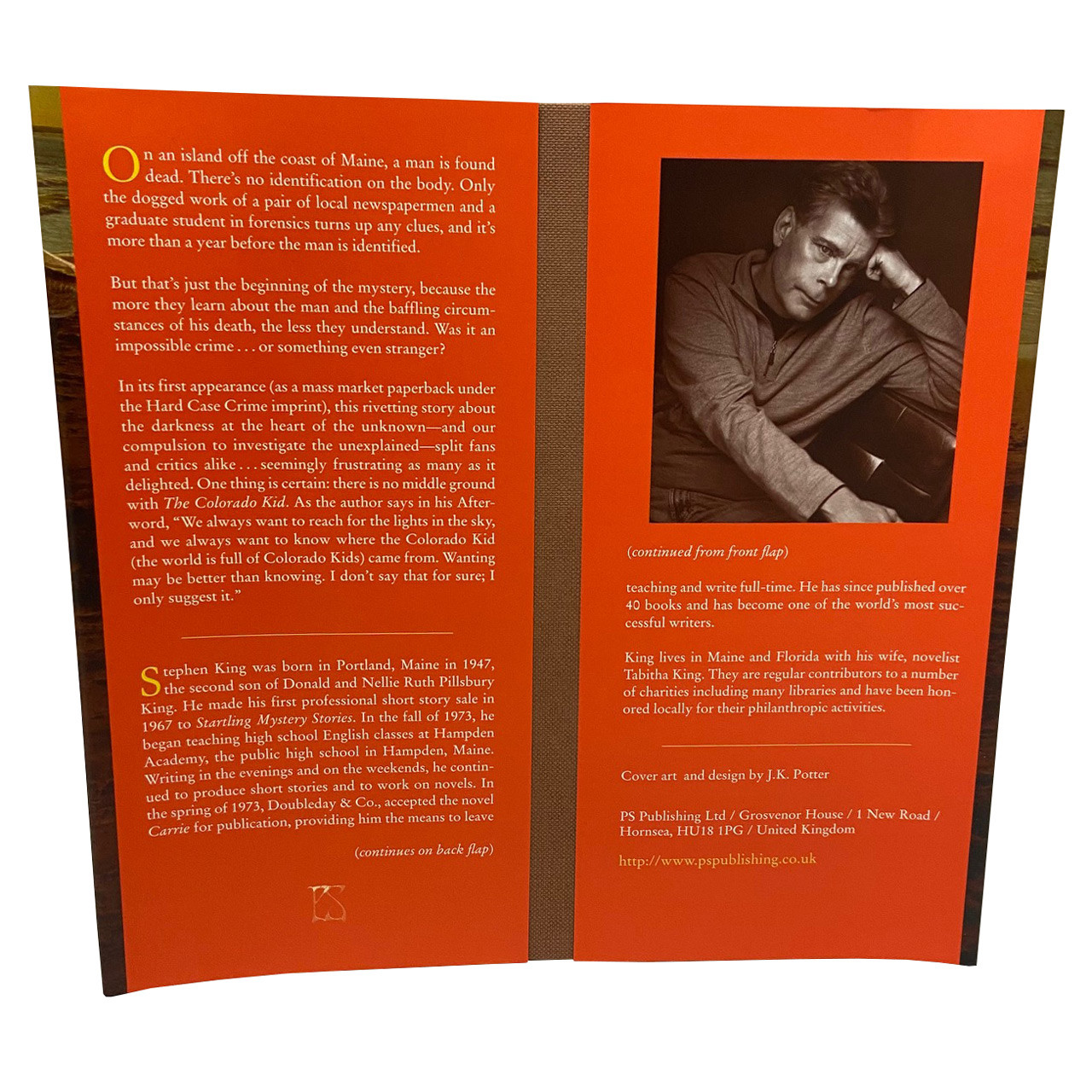 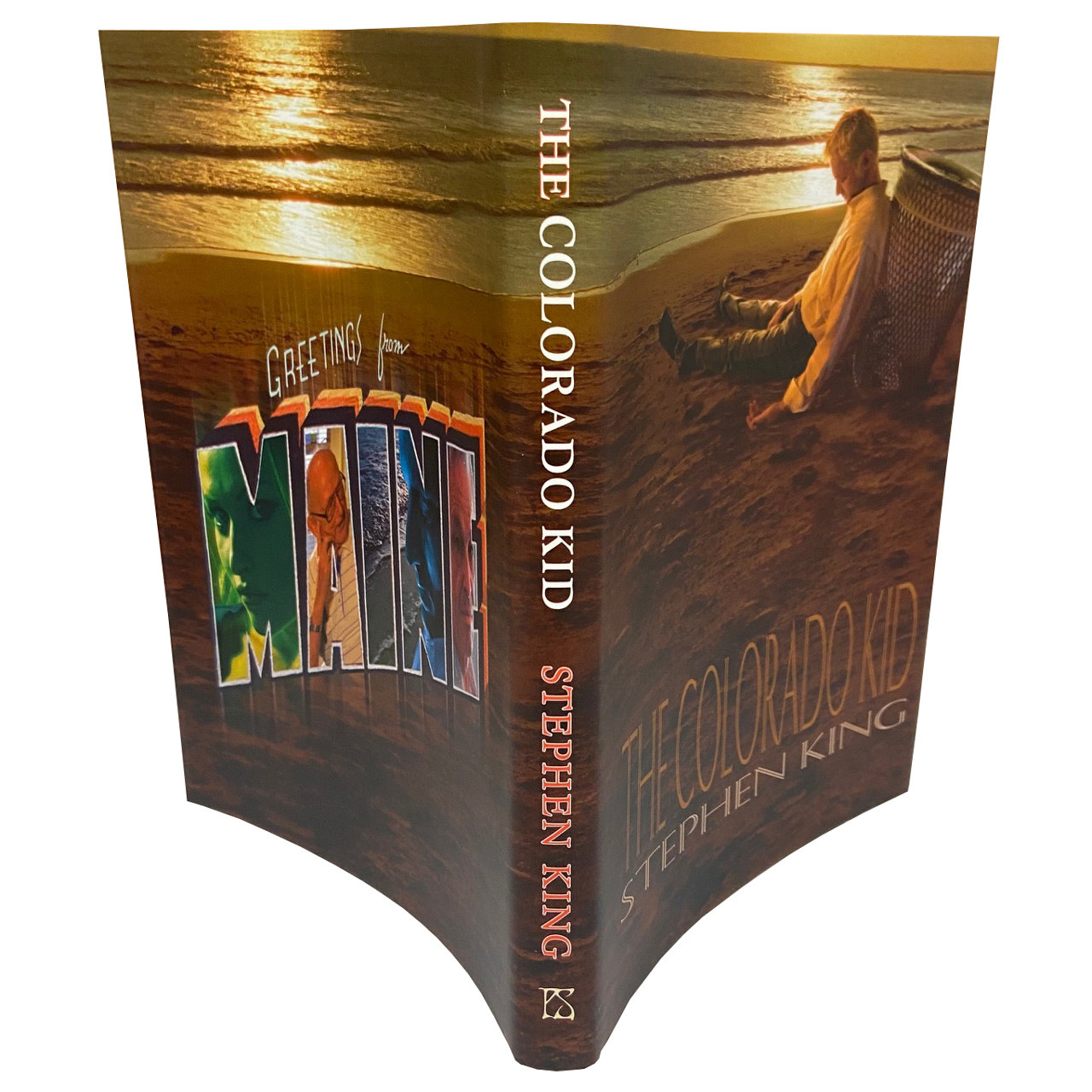 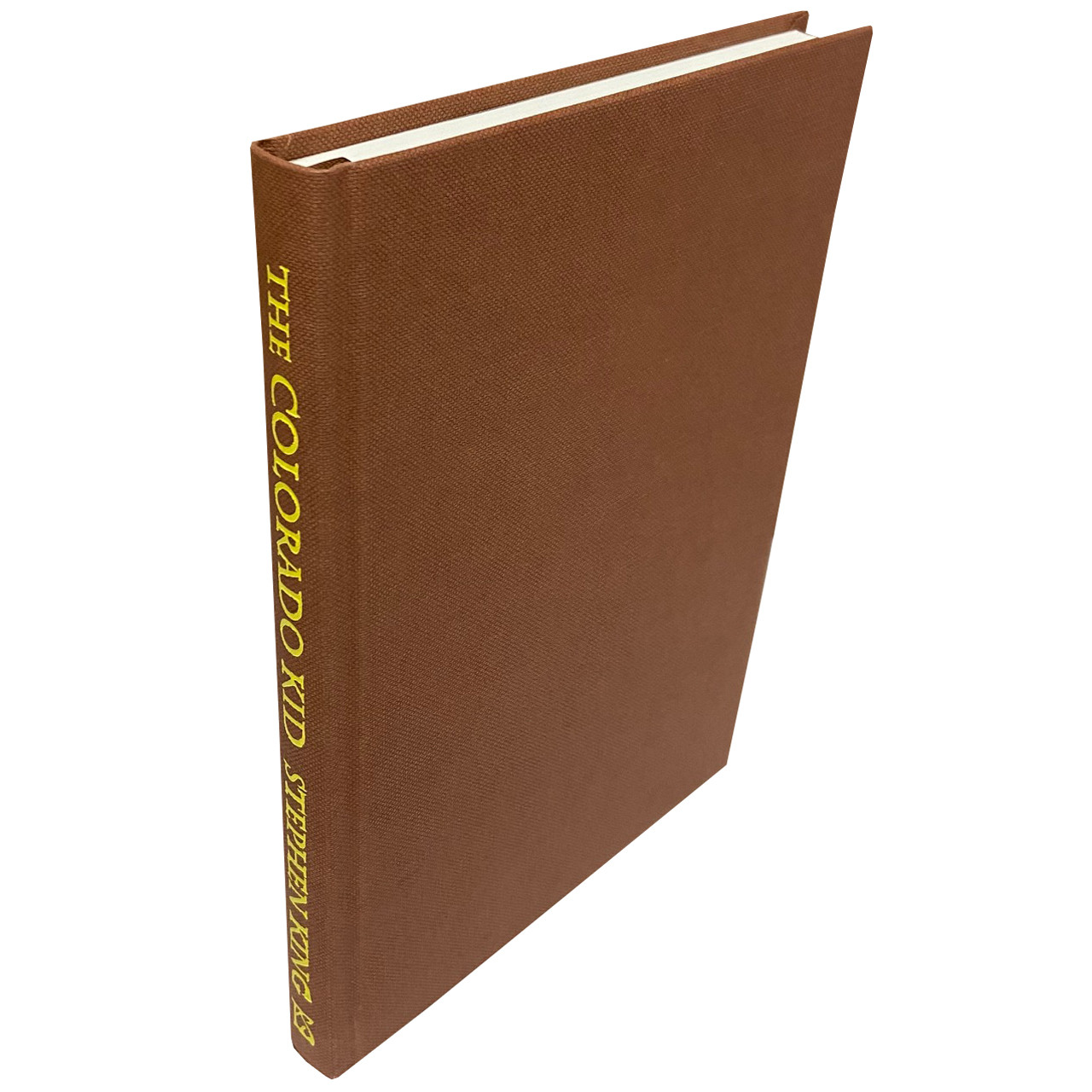 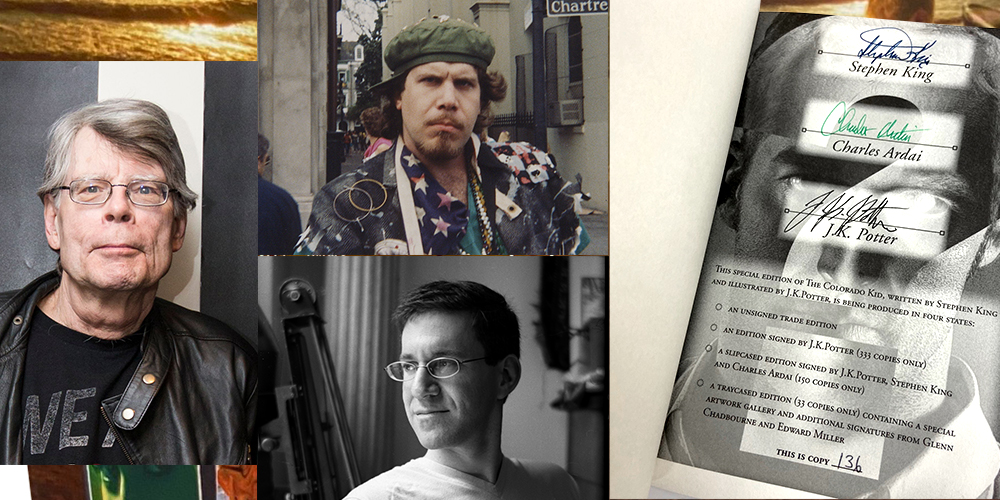 FIRST HARDCOVER EDITION as stated on the copyright page.

This edition was published in the following states:

2. A signed limited edition of 450 copies. Numbered, slip-cased and signed by Stephen King and the contributing illustrator.

3. An artist edition of 1,000 copies signed and numbered by the contributing illustrator.

4. An unsigned, unnumbered hardback edition of 10,000 copies. While this is technically limited, it's not a 1st edition and the least valuable of the various editions.

This listing is for State 2, signed by Stephen King along with Charles Ardai and J.K. Potter.

About The Colorado Kid

The Colorado Kid is a mystery novel written by Stephen King for the Hard Case Crime imprint, published in 2005. The book was issued in one paperback-only edition by the specialty crime and mystery publishing house. The third-person narrative concerns the investigation of the body of an unidentified man found on a tiny island off the coast of Maine. Lacking any identification or obvious clues, the case reaches nothing but repeated dead-ends. Over a year later the man is identified, but all further important questions remain unanswered. The two-person staff of the island newspaper maintain a longstanding fascination with the case, and twenty-five years later use the mysterious tale to ply the friendship and test the investigative mettle of a postgrad intern rookie reporter. A television series loosely inspired by The Colorado Kid, titled Haven, aired on Syfy from July 2010 to December 2015. Stephen King's next novel for Hard Case Crime was Joyland, which was published in June 2013.

On an island off the coast of Maine, a man is found dead. There's no identification on the body. Only the dogged work of a pair of local newspapermen and a graduate student in forensics turns up any clues, and it's more than a year before the man is identified.

But that's just the beginning of the mystery, because the more they learn about the man and the baffling circumstances of his death, the less they understand. Was it an impossible crime...or something even stranger?

In its first appearance (as a mass market paperback under the Hard Case Crime imprint), this riveting story about the darkness at the heart of the unknown — and our compulsion to investigate the unexplained — split fans and critics alike... seemingly frustrating as many as it delighted. One thing is certain: there is no middle ground with The Colorado Kid. As the author says in his Afterword, "We always want to reach for the lights in the sky, and we always want to know where the Colorado Kid (the world is full of Colorado Kids) came from. Wanting may be better than knowing. I don't say that for sure; I only suggest it."

Charles Ardai is an American entrepreneur, businessperson, and writer of award winning crime fiction and mysteries. He is founder and editor of Hard Case Crime, a line of pulp-style paperback crime novels. He is also an early employee of D. E. Shaw & Co. and remains a managing director of the firm. He was the former chairman of Schrödinger, Inc.

Jeffrey Knight Potter is a self-taught artist greatly influenced by the photographs of John Laughlin, the creator of the first American surrealist photography. Potter believed that he could make a living doing photographic fantasy illustrations after seeing Laughlin’s work and his book of photography of antebellum architecture titled Ghosts Along the Mississippi.

For ten years Potter gained experience in the field by working for several photo labs in photo-retouching by using airbrush techniques. Once he began creating his own horror/fantasy images, fans quickly emerged for his work featured in Nyctalops, Xenophile and Weirdbook magazines. Soon after, his unsettling works were also in demand for the covers of science fiction and fantasy hardcover books. The sophistication of his disturbing imagery is a dramatic departure from the pulp art world of previous decades.

A combination of photographic collages, airbrush techniques and textured pen and ink illustration without the use of digital computer manipulation set Potter’s work apart. His interest in cinematic effects influences the scenes he creates, which he refers to as “movie stills without the movie.” The pairing of photographic images with surreal and horrific elements makes J.K. Potter a unique, visual innovator of the truly creepy.

VERY FINE with slipcase the same. The condition is of the highest quality without any discernible flaws. Unread book with square and tight spine. Free of any marks, writings, or stamps. A wonderful bright clean copy. Photos of actual item.