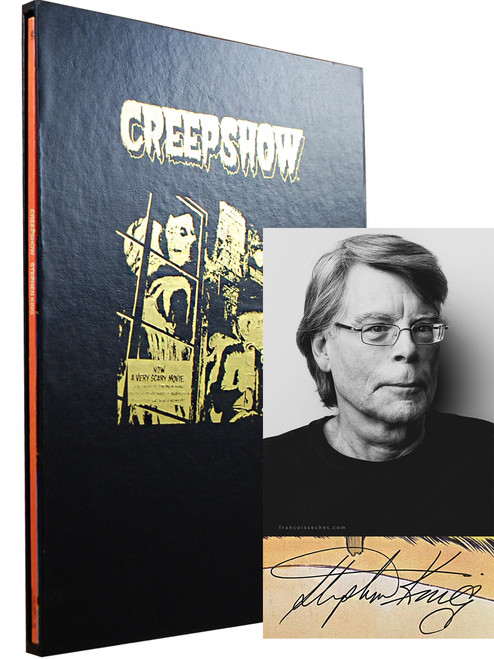 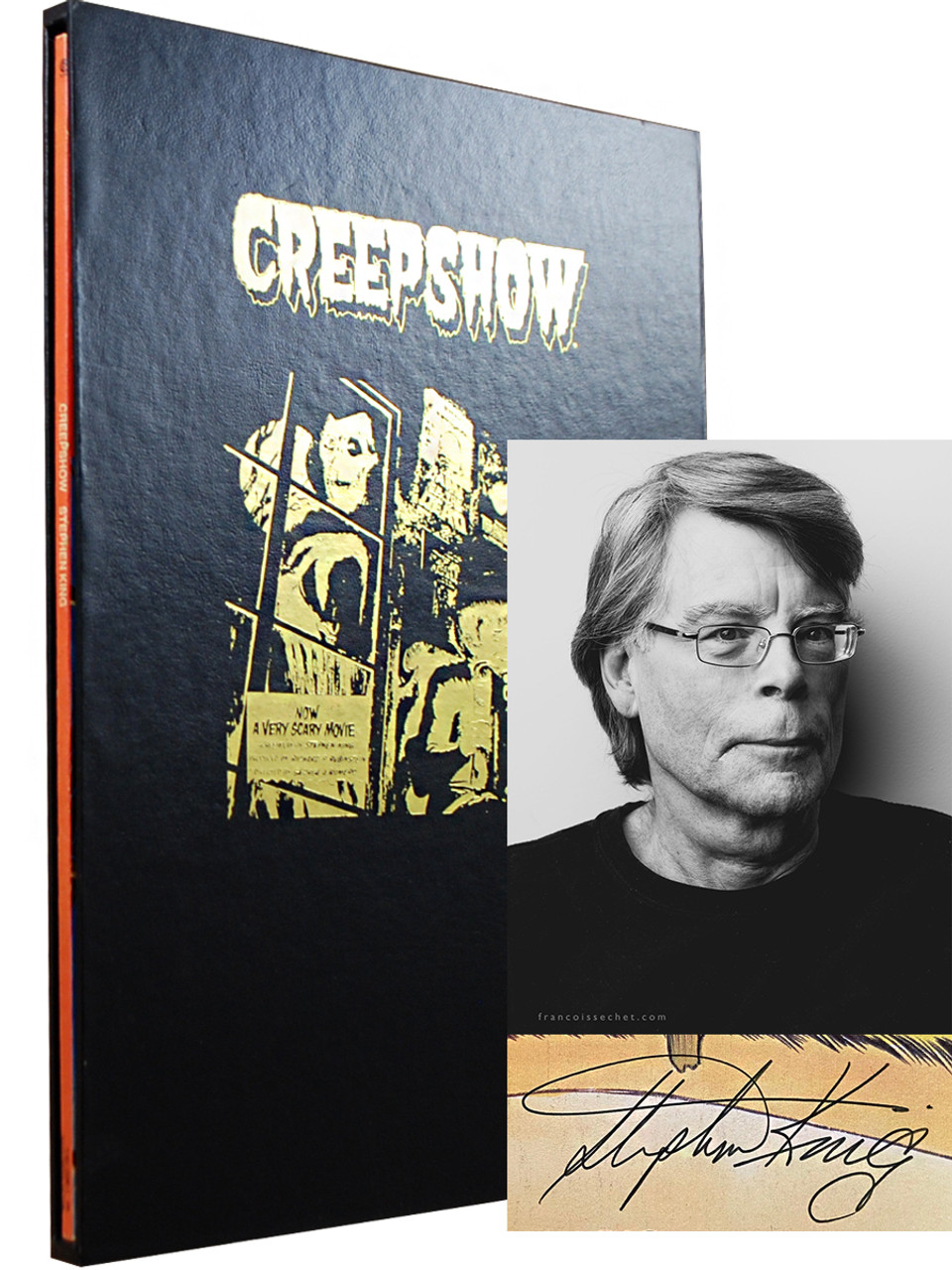 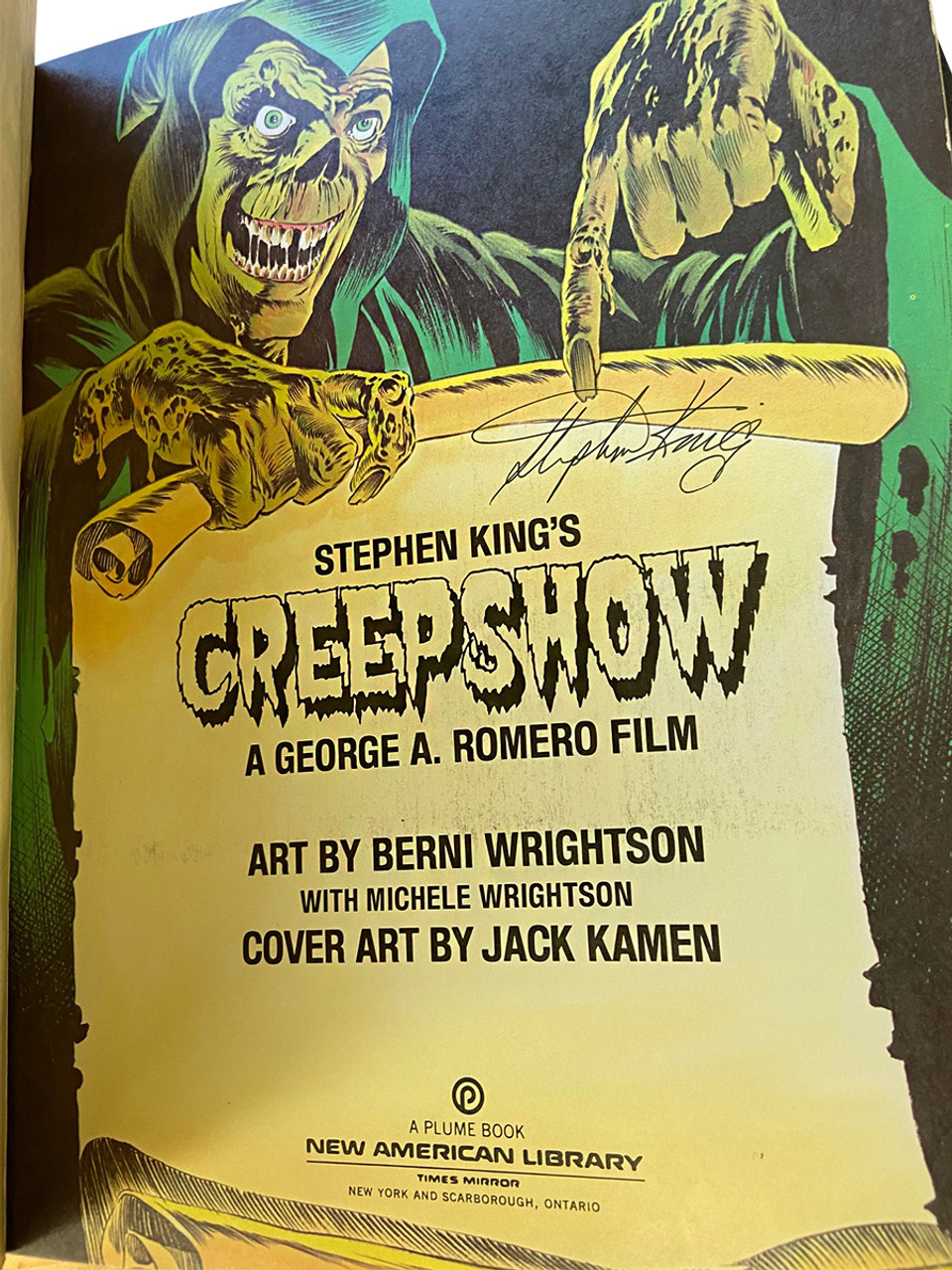 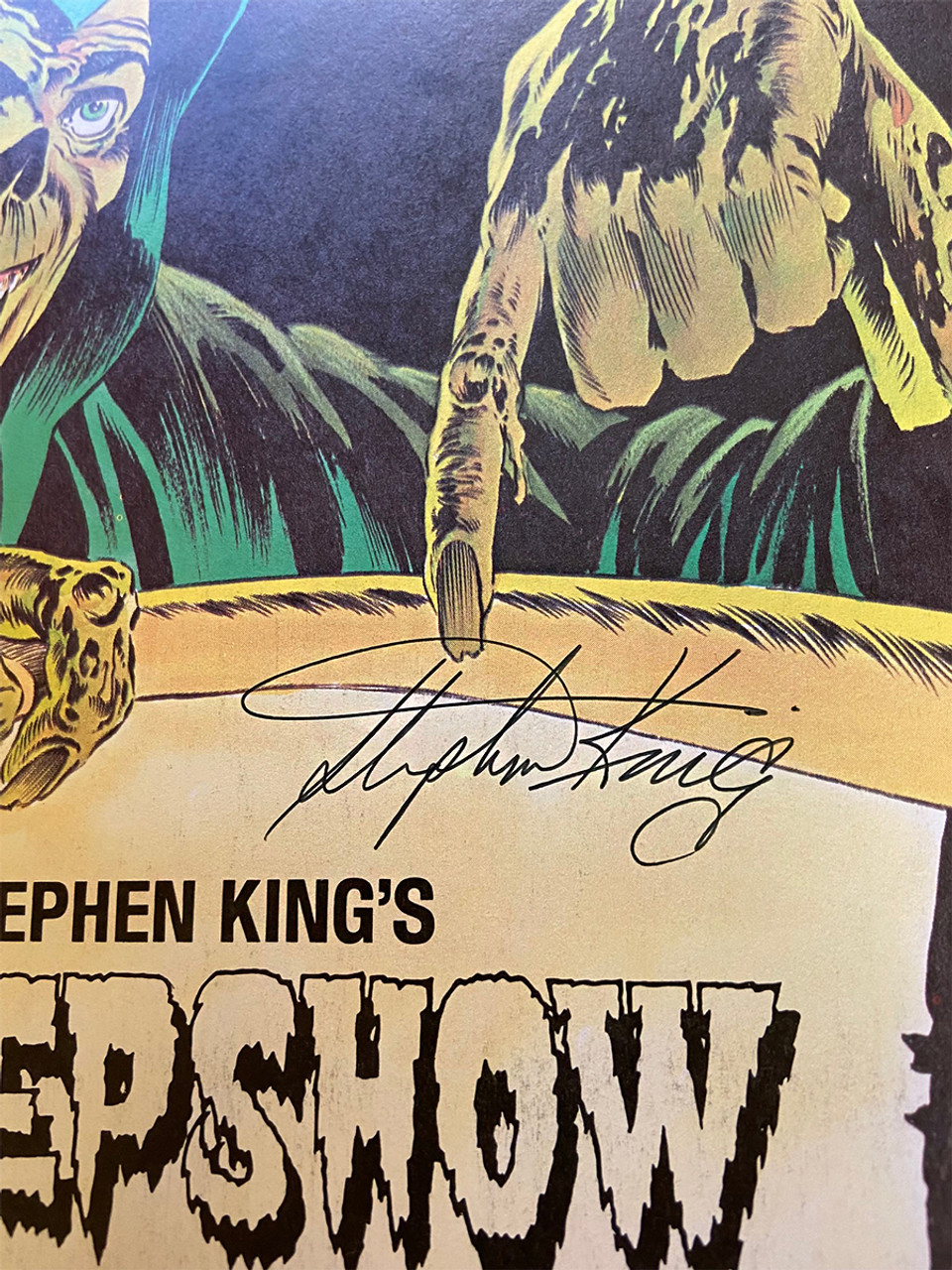 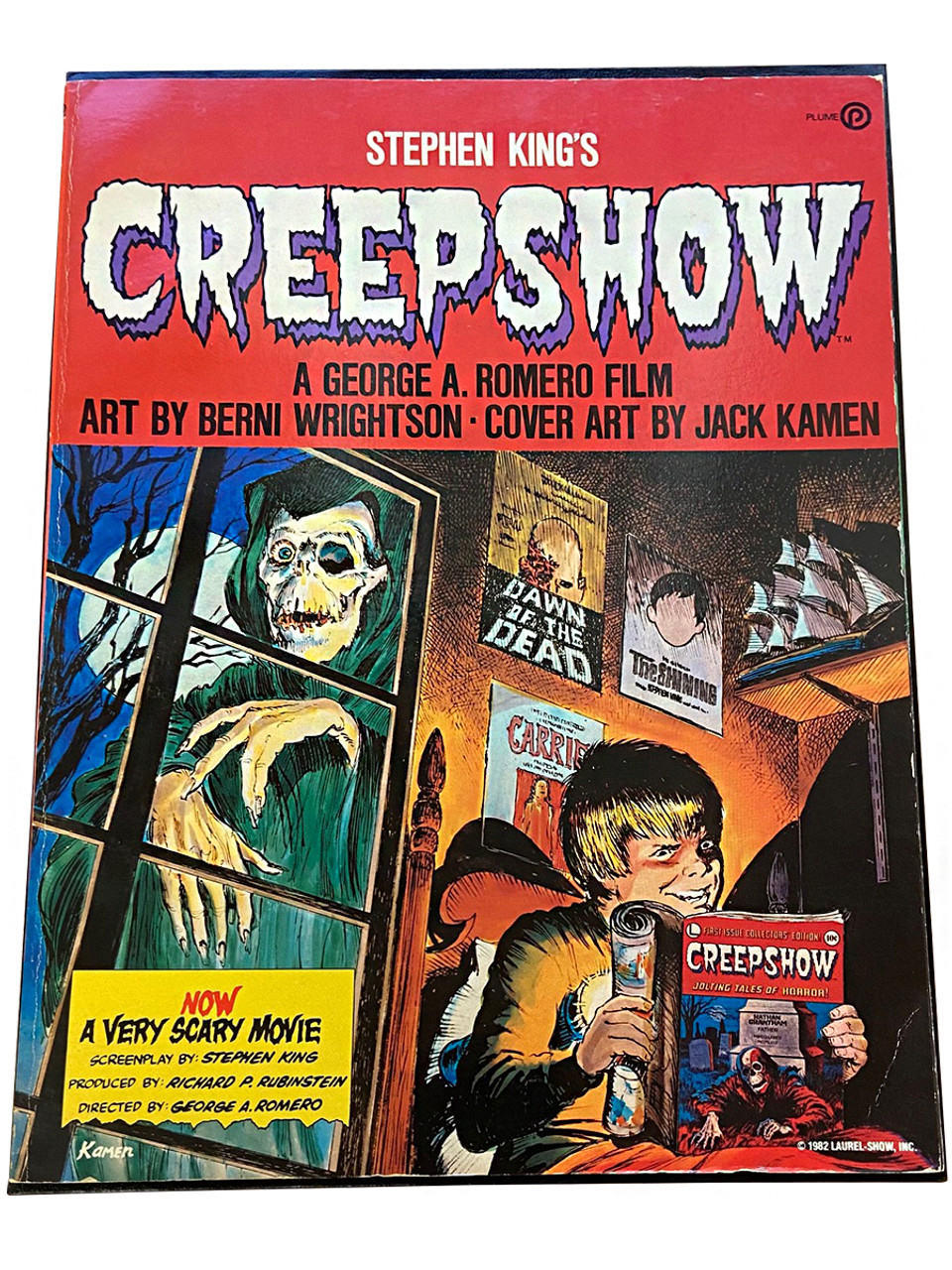 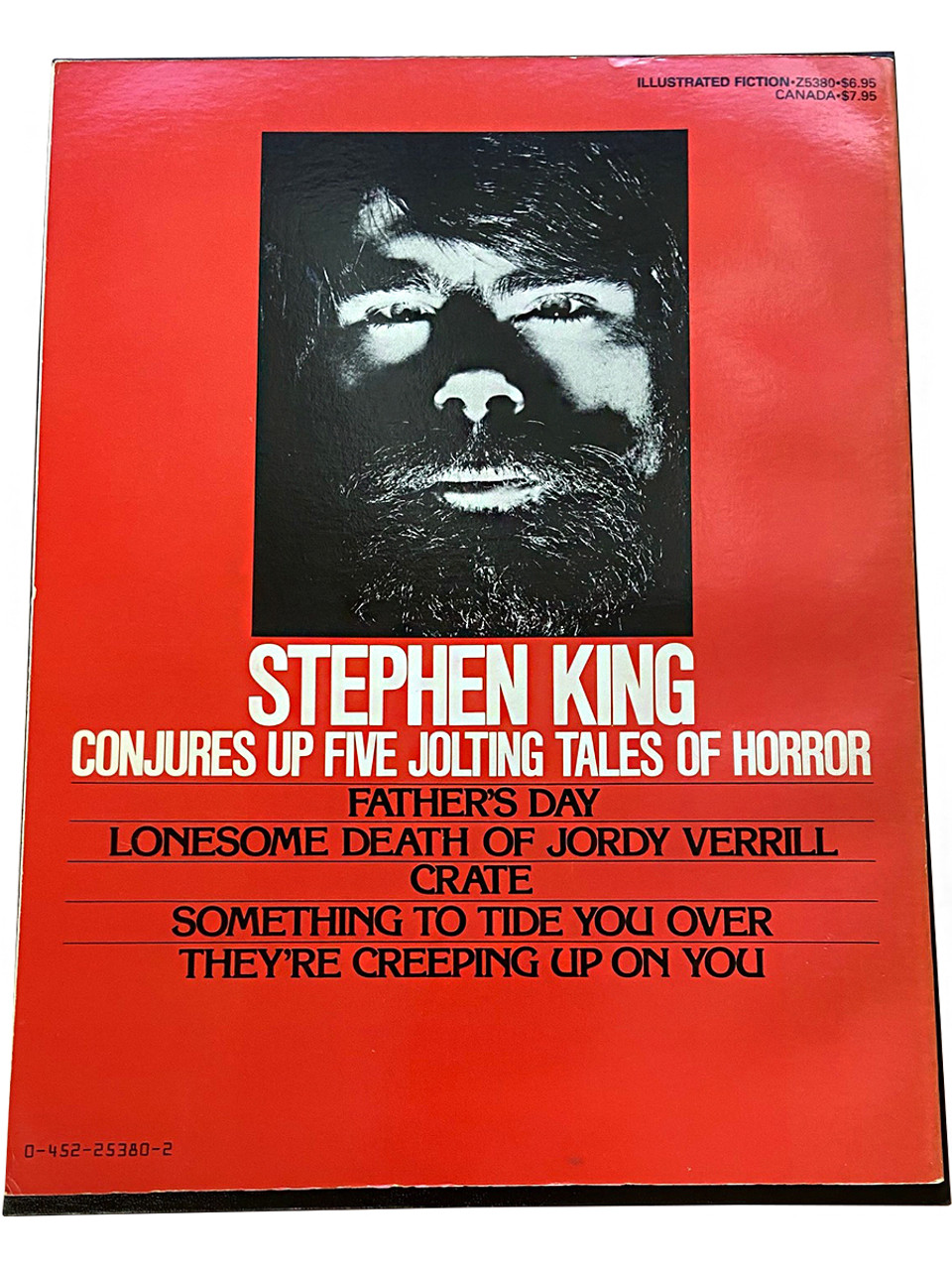 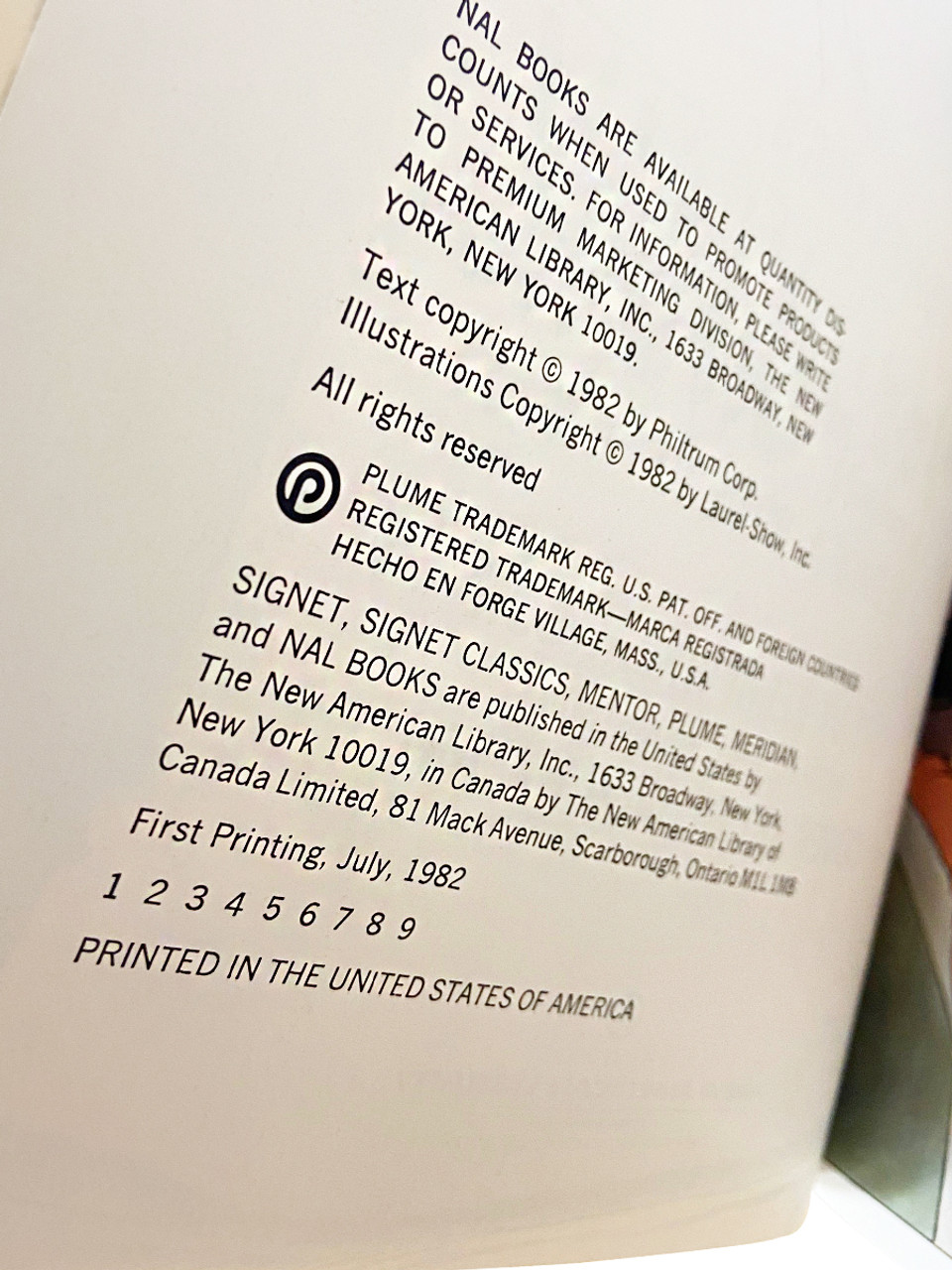 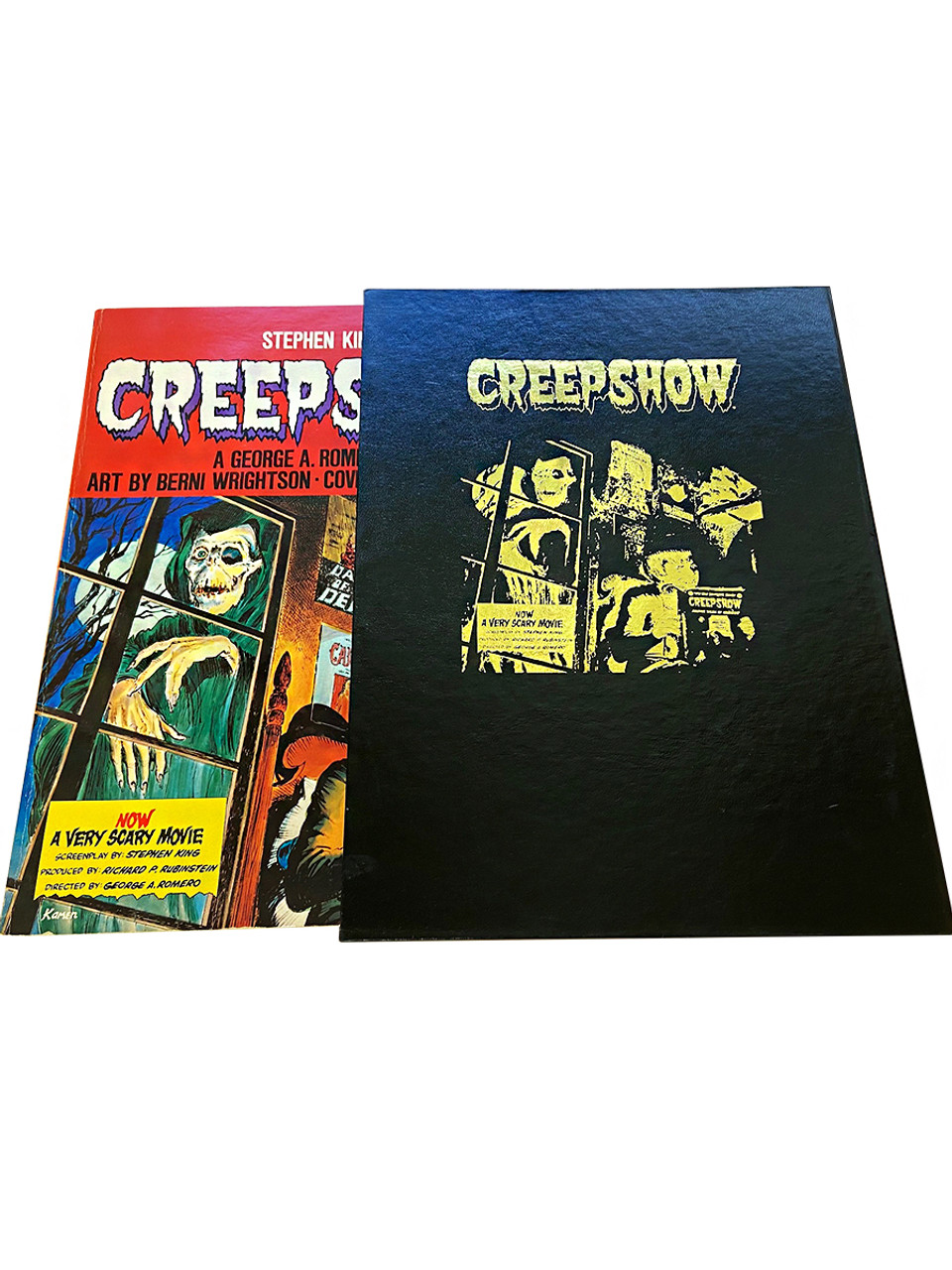 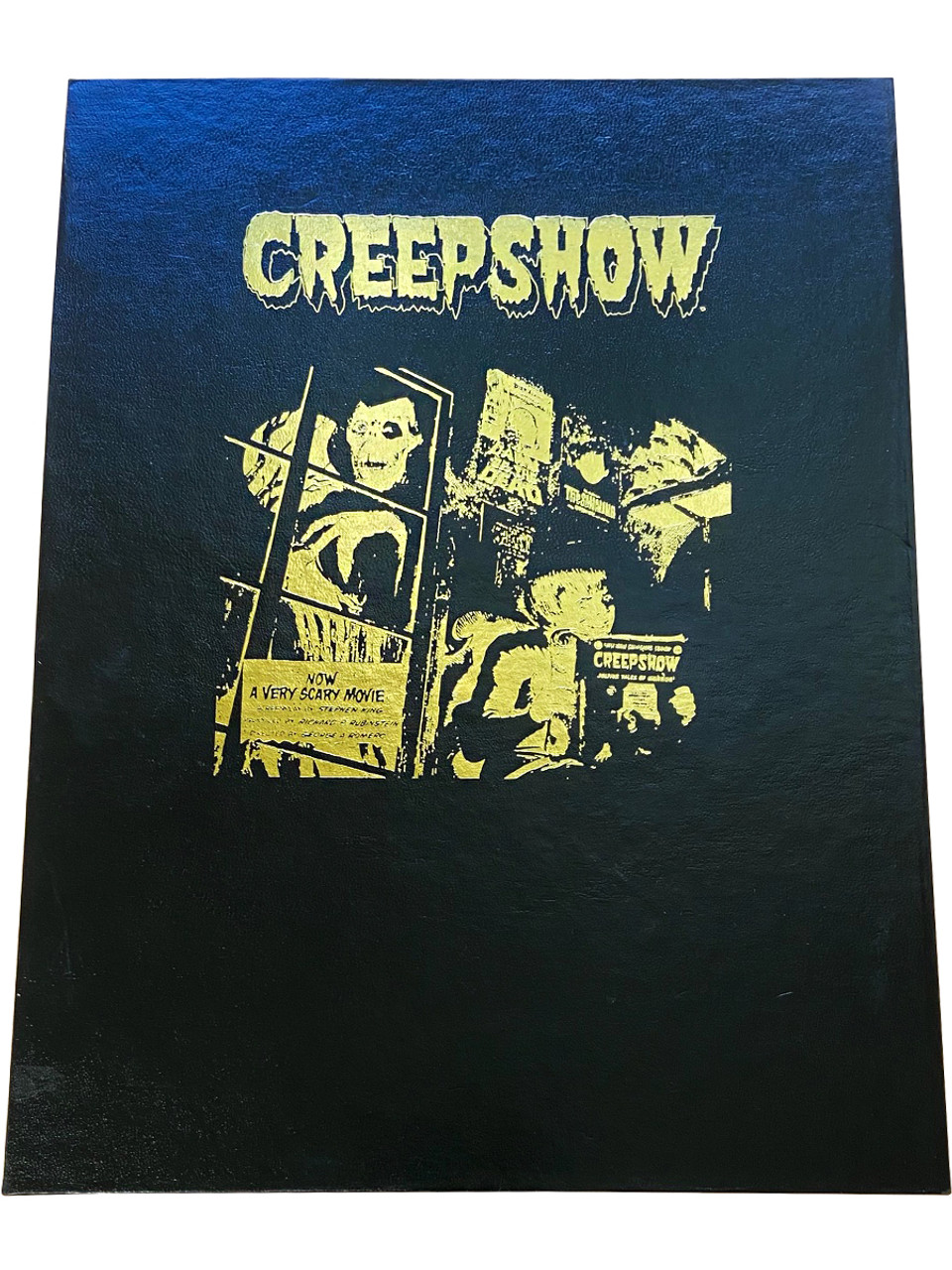 "First Printing, July, 1982" as stated on the copyright page

New York: New American Library / Plume, 1982. Stephen King "Creepshow" Personally signed by Stephen King directly onto the title page.  First edition, First Printing with the full number line as required on the copyright page. An over-sized trade softcover. ISBN # 0-452-25380-2. This edition is not a Book Club Edition. The binding is glued and not stapled. All original without any modifications. Includes COA.

A rare item for the Stephen King collector. This colorful comic will enjoy a special status in your collection because it is a first printing that has been autographed by King. This original 1982 comic is lavishly illustrated throughout.

Stephen Edwin King (born September 21, 1947) is an American author of horror, supernatural fiction, suspense, crime, science-fiction, and fantasy novels. Described as the "King of Horror", a play on his surname and a reference to his high standing in pop culture, his books have sold more than 350 million copies, and many have been adapted into films, television series, miniseries, and comic books. King has published 63 novels, including seven under the pen name Richard Bachman, and five non-fiction books. He has also written approximately 200 short stories, most of which have been published in book collections.

King has received Bram Stoker Awards, World Fantasy Awards, and British Fantasy Society Awards. In 2003, the National Book Foundation awarded him the Medal for Distinguished Contribution to American Letters. He has also received awards for his contribution to literature for his entire bibliography, such as the 2004 World Fantasy Award for Life Achievement and the 2007 Grand Master Award from the Mystery Writers of America.[8] In 2015, he was awarded with a National Medal of Arts from the U.S. National Endowment for the Arts for his contributions to literature.

Bernie “Berni” Wrightson (born October 27, 1948, Baltimore, Maryland, USA) was an American artist known for his horror illustrations and comic books. He received training in art from reading comics, particularly those of EC, as well as through a correspondence course from the Famous Artists School. In 1966, Wrightson began working for The Baltimore Sun newspaper as an illustrator. The following year, after meeting artist Frank Frazetta at a comic-book convention in New York City, he was inspired to produce his own stories. In 1968, he showed copies of his sequential art to DC Comics editor Dick Giordano and was given a freelance assignment. Wrightson began spelling his name “Berni” in his professional work to distinguish himself from an Olympic diver named Bernie Wrightson, but later restored the final E to his name.

His first professional comic work appeared in House of Mystery #179 in 1968. He continued to work on a variety of mystery and anthology titles for both DC and its principal rival, Marvel Comics. In 1971, with writer Len Wein, Wrightson co-created the muck creature Swamp Thing for DC. He also co-created Destiny, later to become famous in the work of Neil Gaiman. By 1974 he had left DC to work at Warren Publishing who were publishing black-and-white horror-comics magazines. There he produced a series of original work as well as adaptations of stories by H. P. Lovecraft and Edgar Allan Poe. In 1975, Wrightson joined with fellow artists Jeff Jones, Michael Kaluta, and Barry Windsor-Smith to form “The Studio,” a shared loft in Manhattan where the group would pursue creative products outside the constraints of comic book commercialism. Though he continued to produce sequential art, Wrightson at this time began producing artwork for numerous posters, prints, calendars, and coloring books.

Wrightson spent seven years drawing approximately 50 detailed pen-and-ink illustrations to accompany an edition of Mary Shelley’s novel Frankenstein, which the artist considers among his most personal work. Wrightson drew the poster for the Stephen King-penned horror film Creepshow, as well as illustrating the comic book adaptation of the film. This led to several other collaborations with King, including illustrations for the novella “Cycle of the Werewolf,” the restored edition of King’s apocalyptic horror epic, “The Stand,” and art for the hardcover editions of “From a Buick 8” and “Dark Tower V.” Wrightson has contributed album covers for a number of bands, including Meat Loaf. The “Captain Sternn” segment of the animated film Heavy Metal is based on the character created by Wrightson for his award-winning short comic series of the same name.

Characters he worked on included Spiderman, Batman and The Punisher, and he provided painted covers for the DC comics Nevermore and Toe Tags, among many others. Recent works include Frankenstein Alive Alive, Dead She Said , the Ghoul and Doc Macabre (IDW Publishing) all co-created with esteemed horror author Steve Niles, and several print/poster/sketchbooks series produced by Nakatomi.

As a conceptual artist, Bernie worked on many movies, particularly in the horror genre: well-known films include Ghostbusters, The Faculty, Galaxy Quest, Spiderman, and George Romero’s Land of the Dead, and Frank Darabont’s Stephen King film The Mist.

Bernie lived in Austin, Texas with his wife Liz and two corgis – Mortimer and Maximillian. In addition to his wife, he is survived by two sons, John and Jeffrey, one stepson, Thomas Adamson, and countless friends and fans. A celebration of his life is planned for later this year.

Near Fine +. Appears unread with a uniform square and tight spine. The colors are clear and vibrant. Light crease to lower right of cover as shown. Very minor edge-wear to a couple of areas. No other markings, writing, or stamps. An original Collector's Grade signed comic that's hard to find in this condition. A wonderful bright clean copy. No bookplates attached or indication of any removed. Includes brand new slipcase.