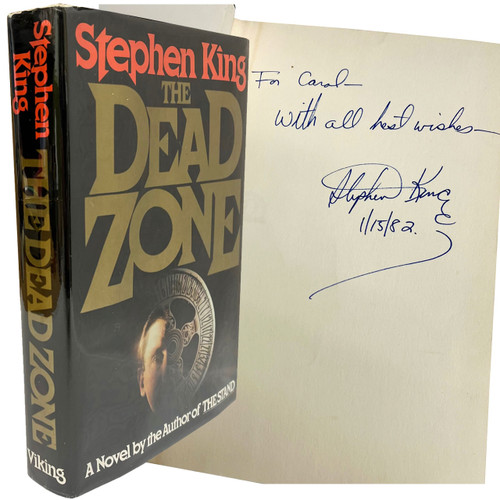 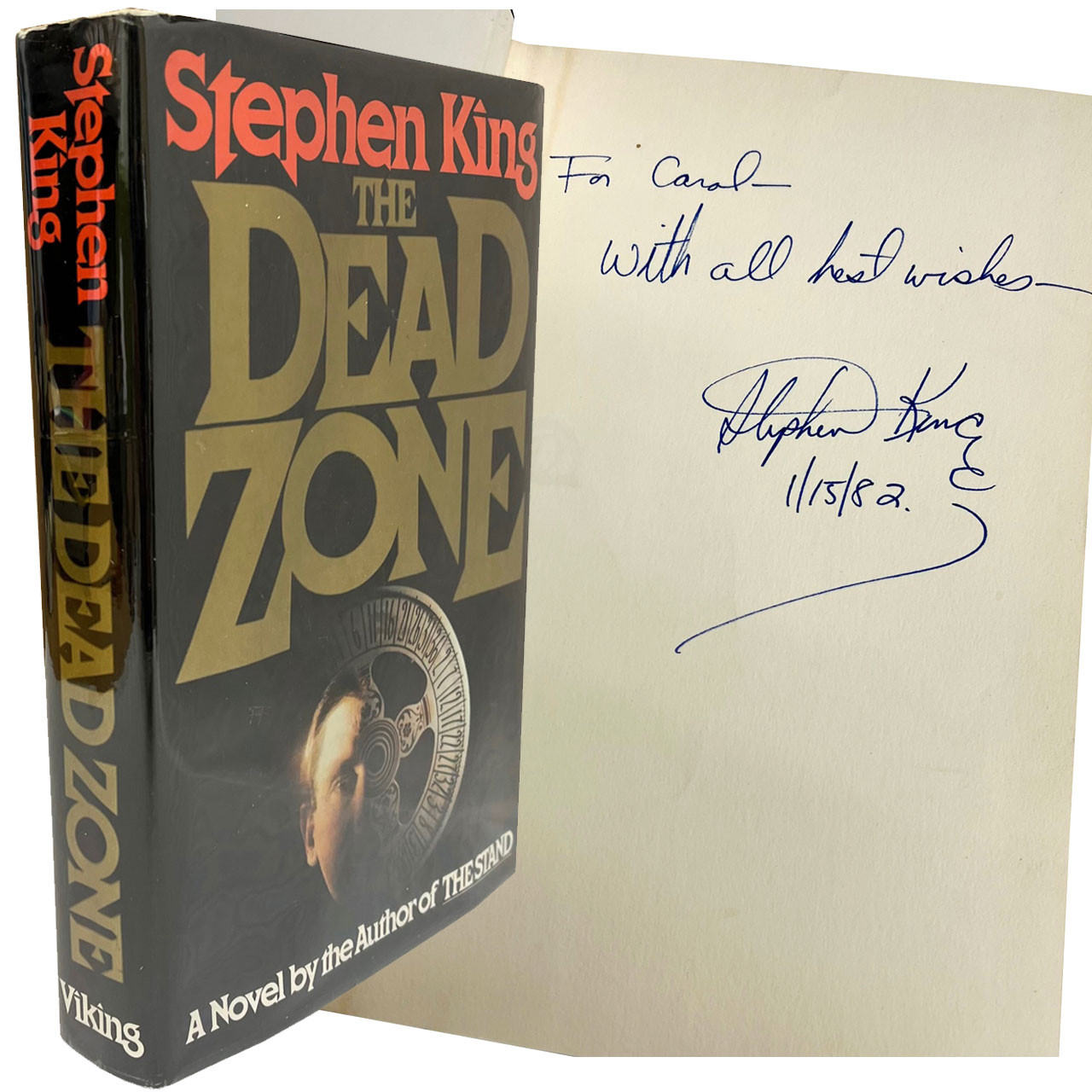 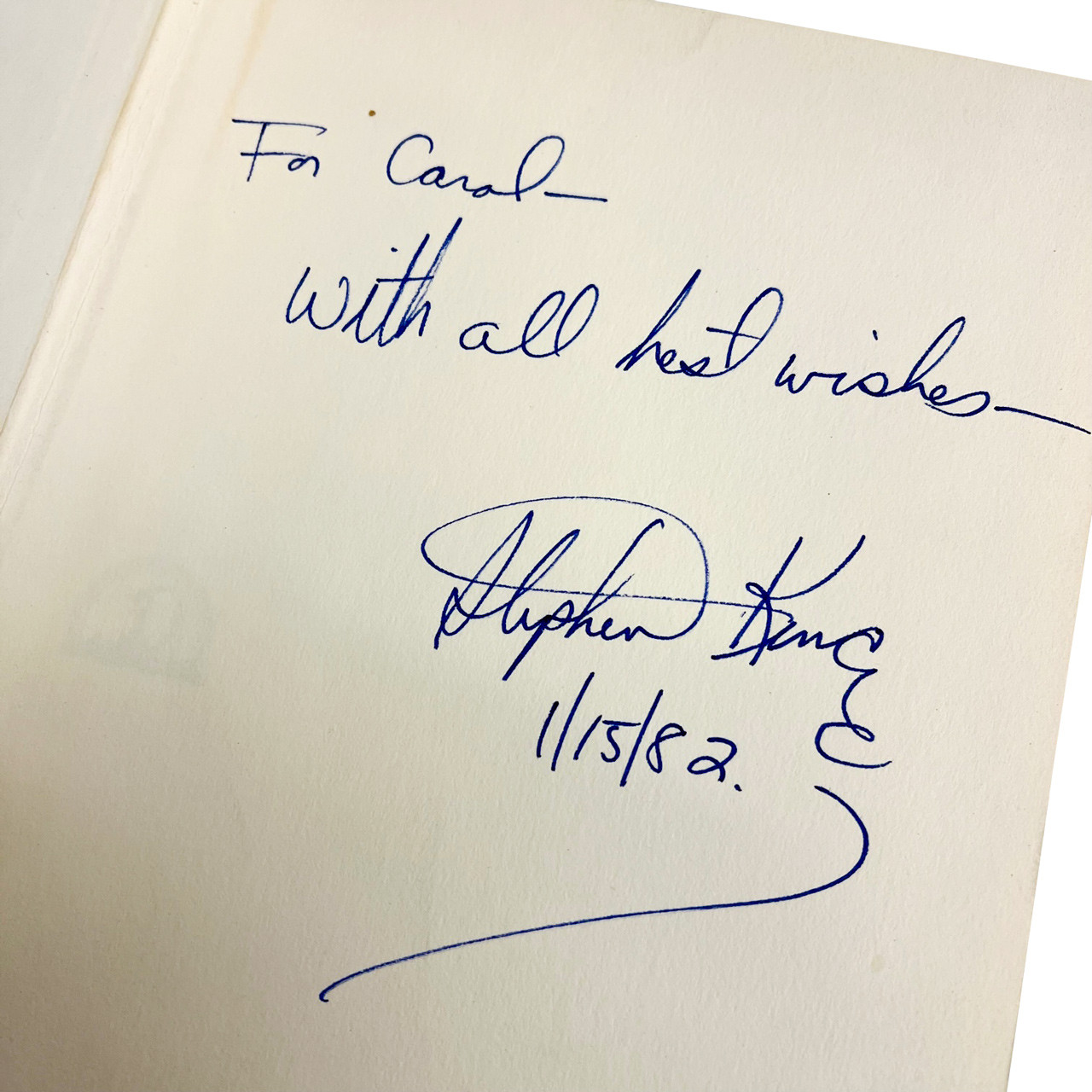 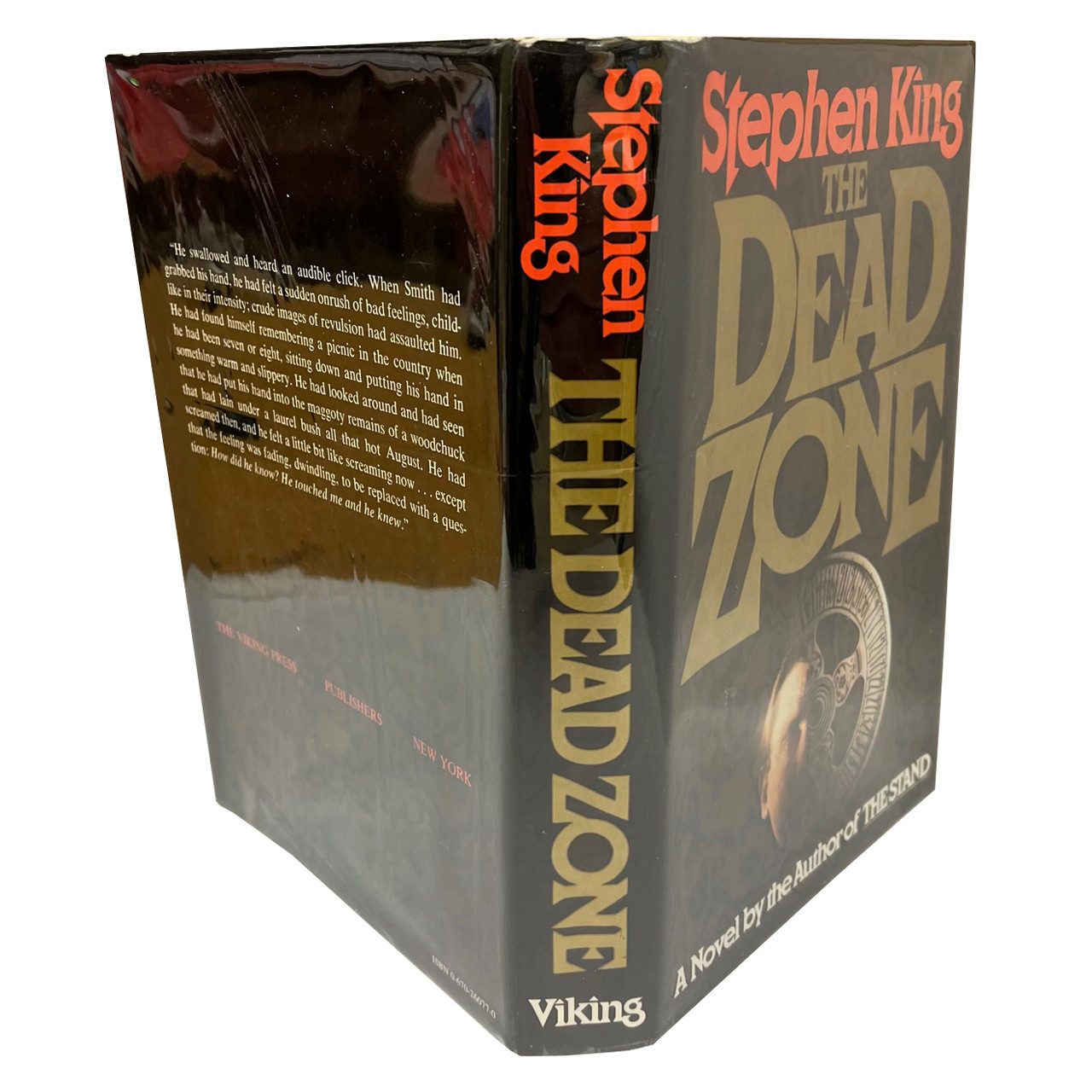 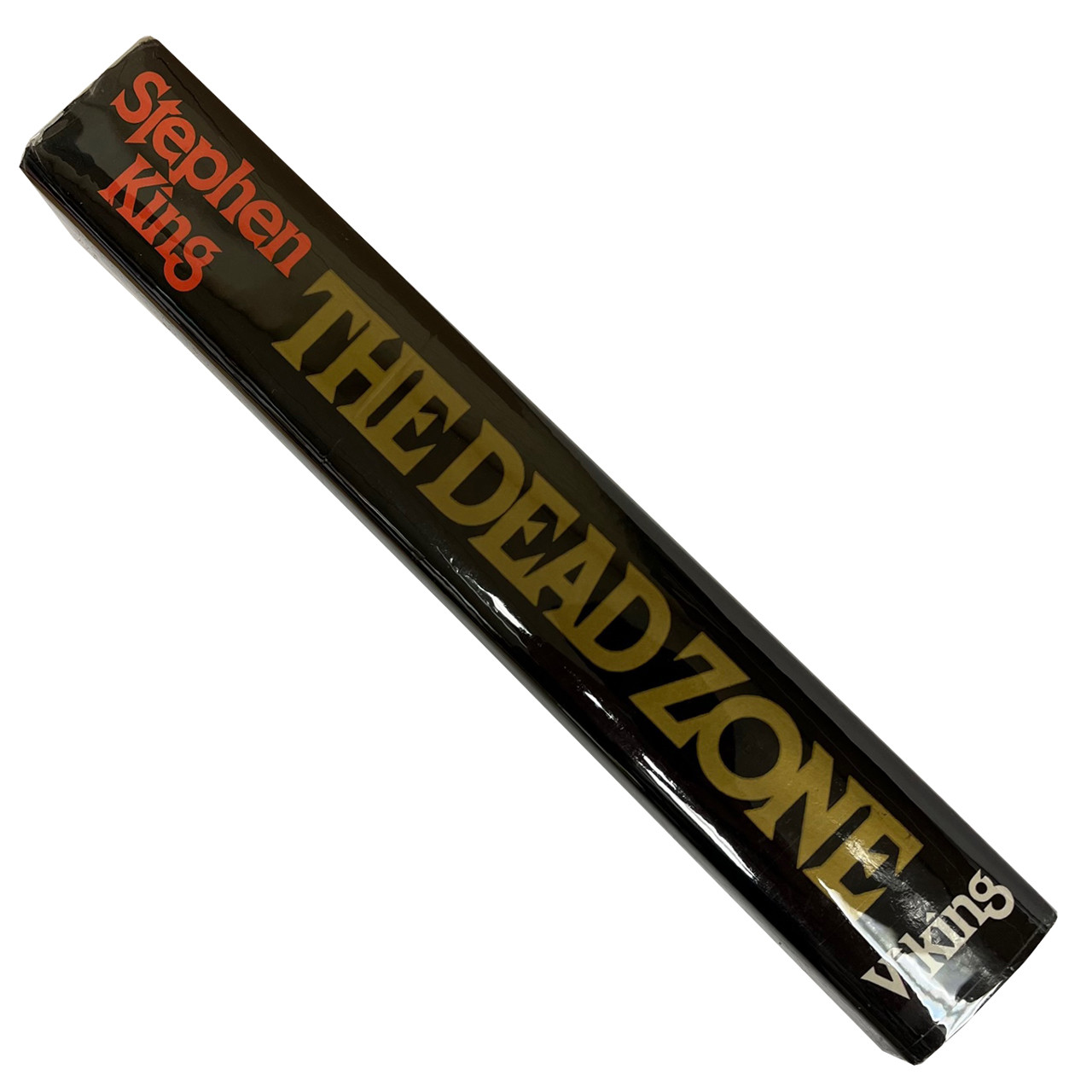 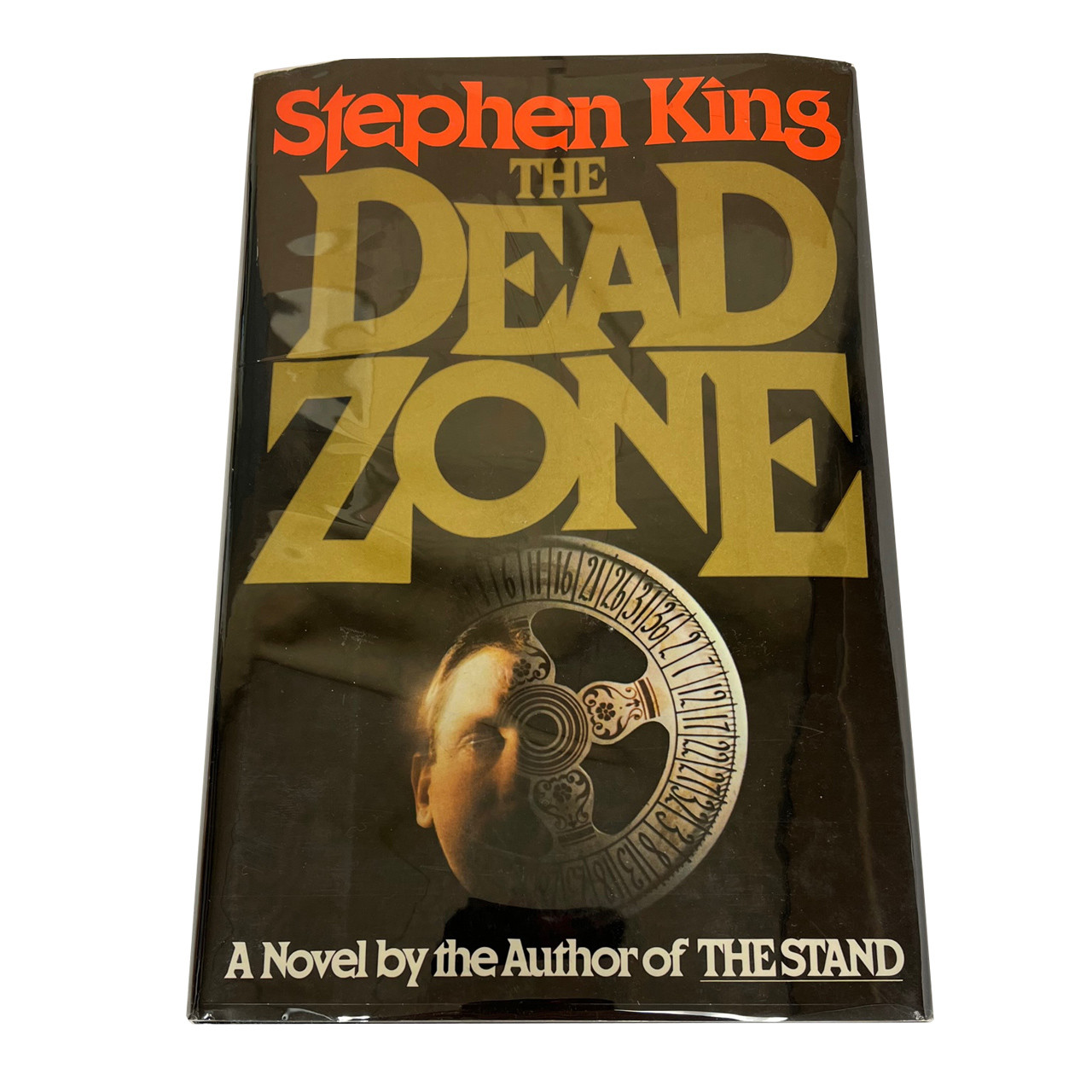 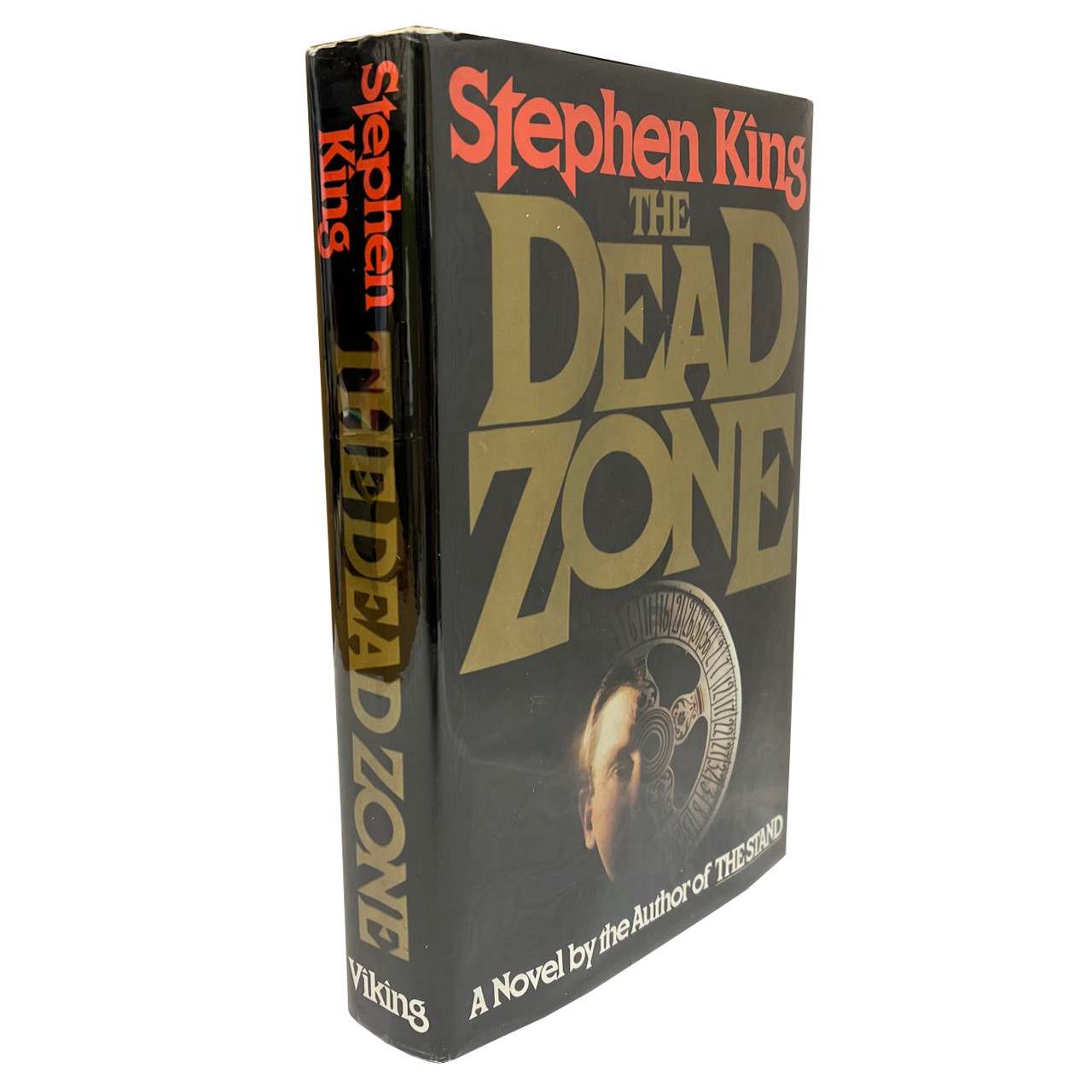 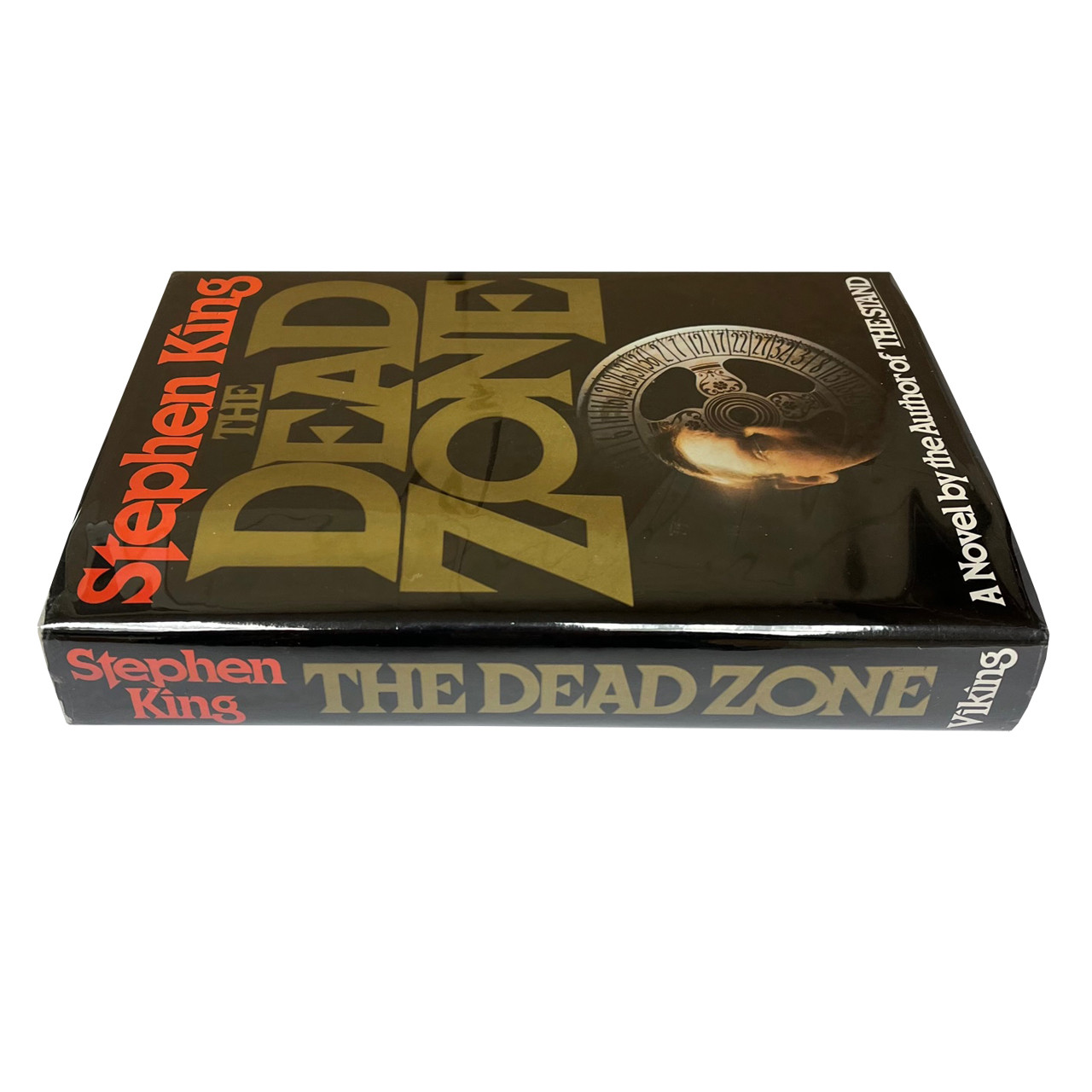 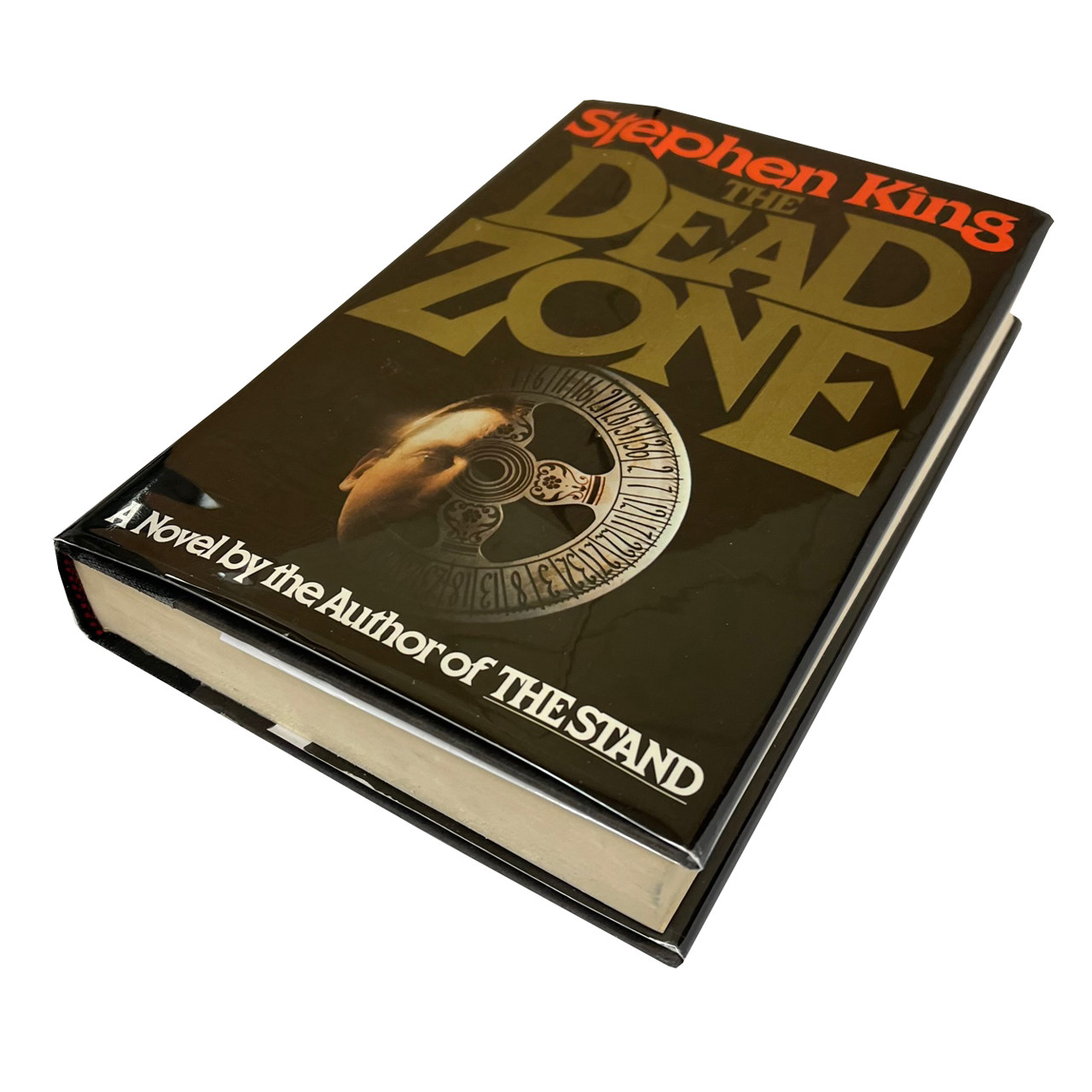 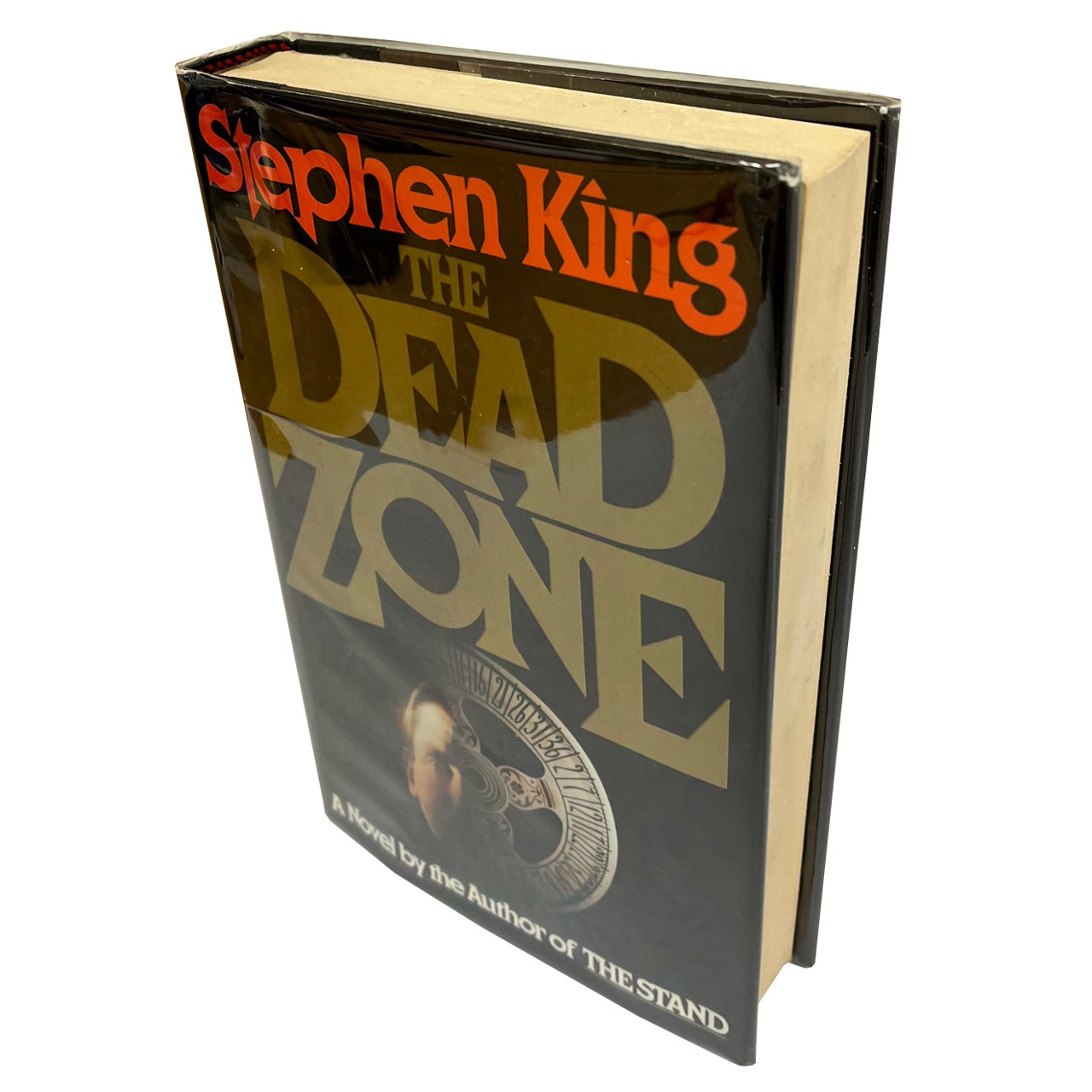 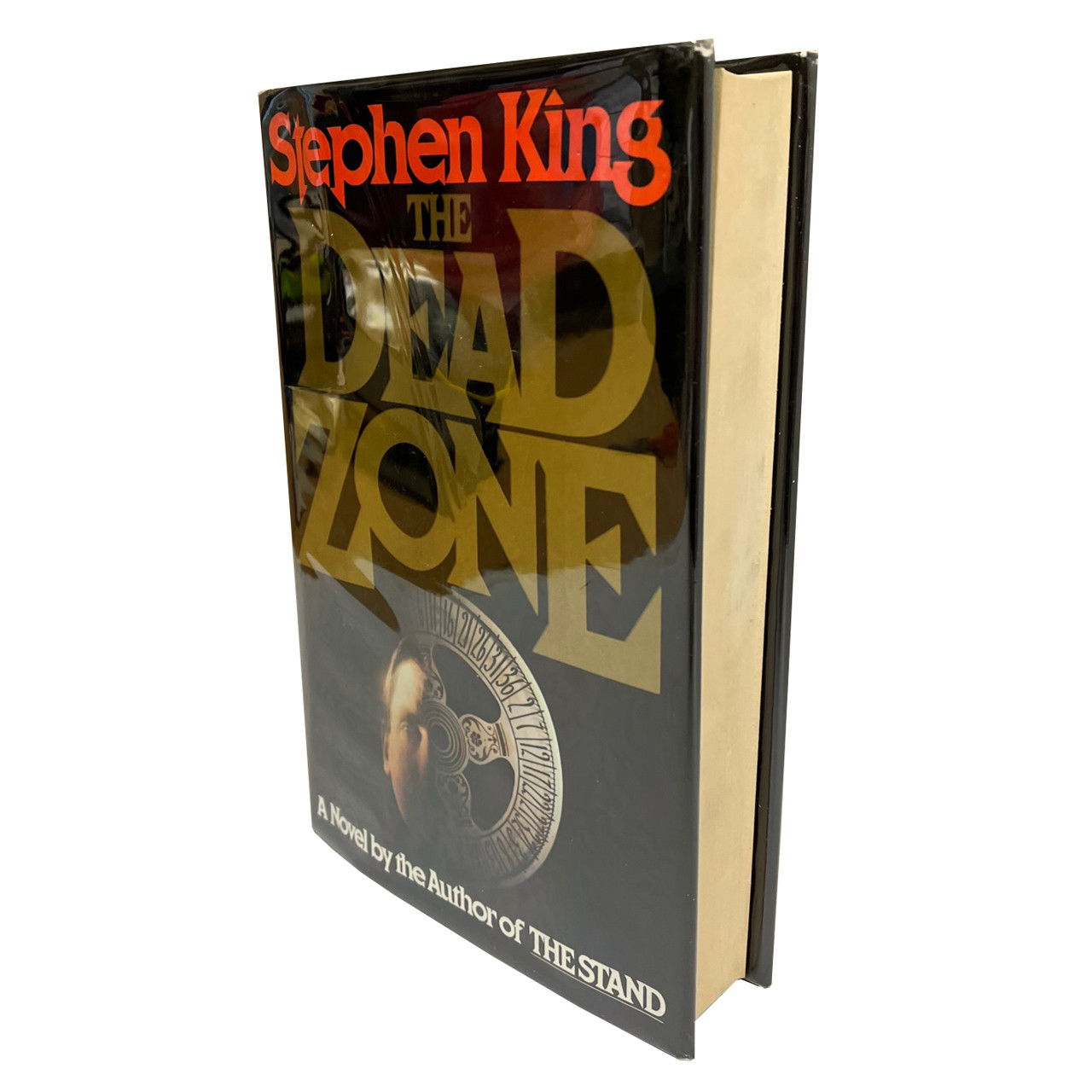 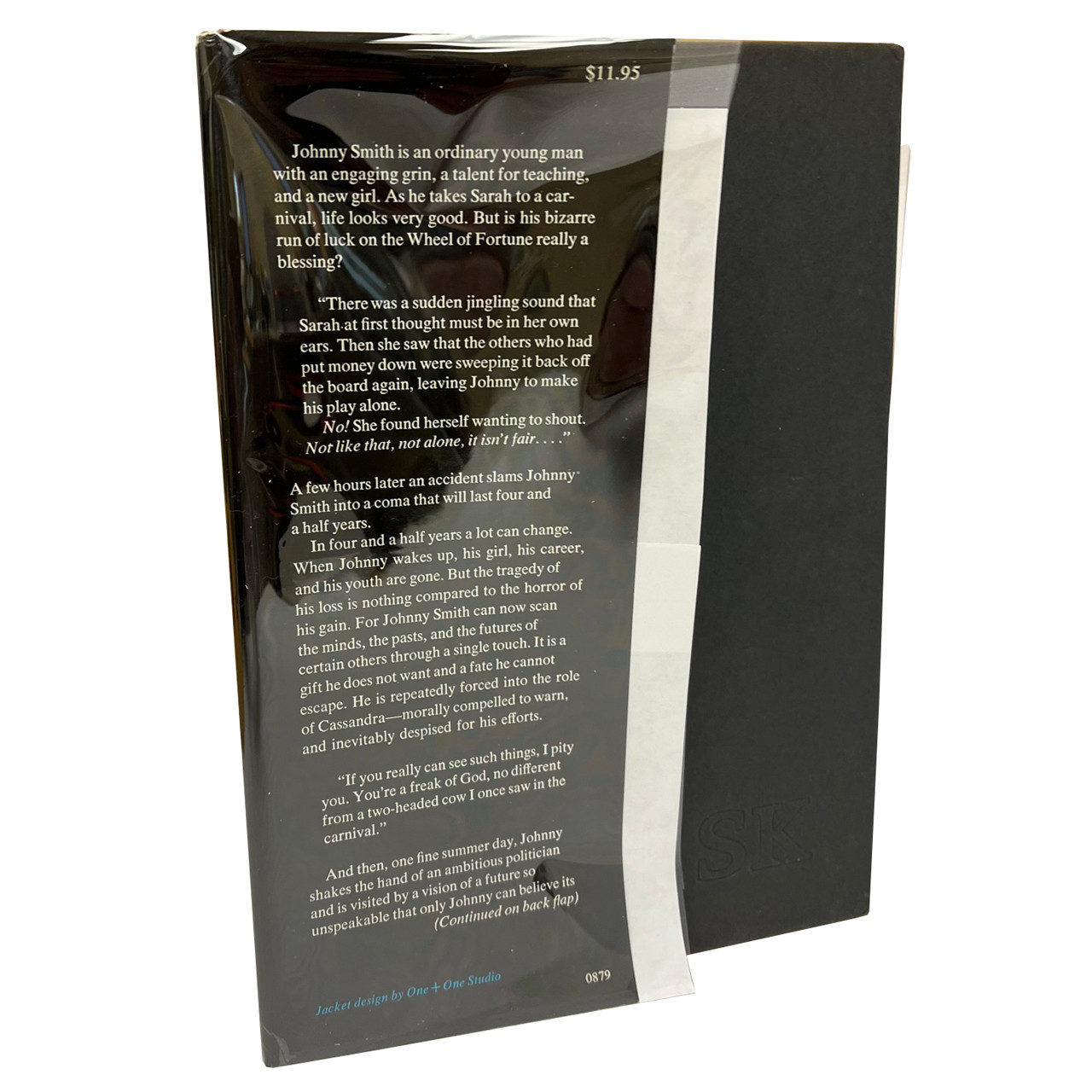 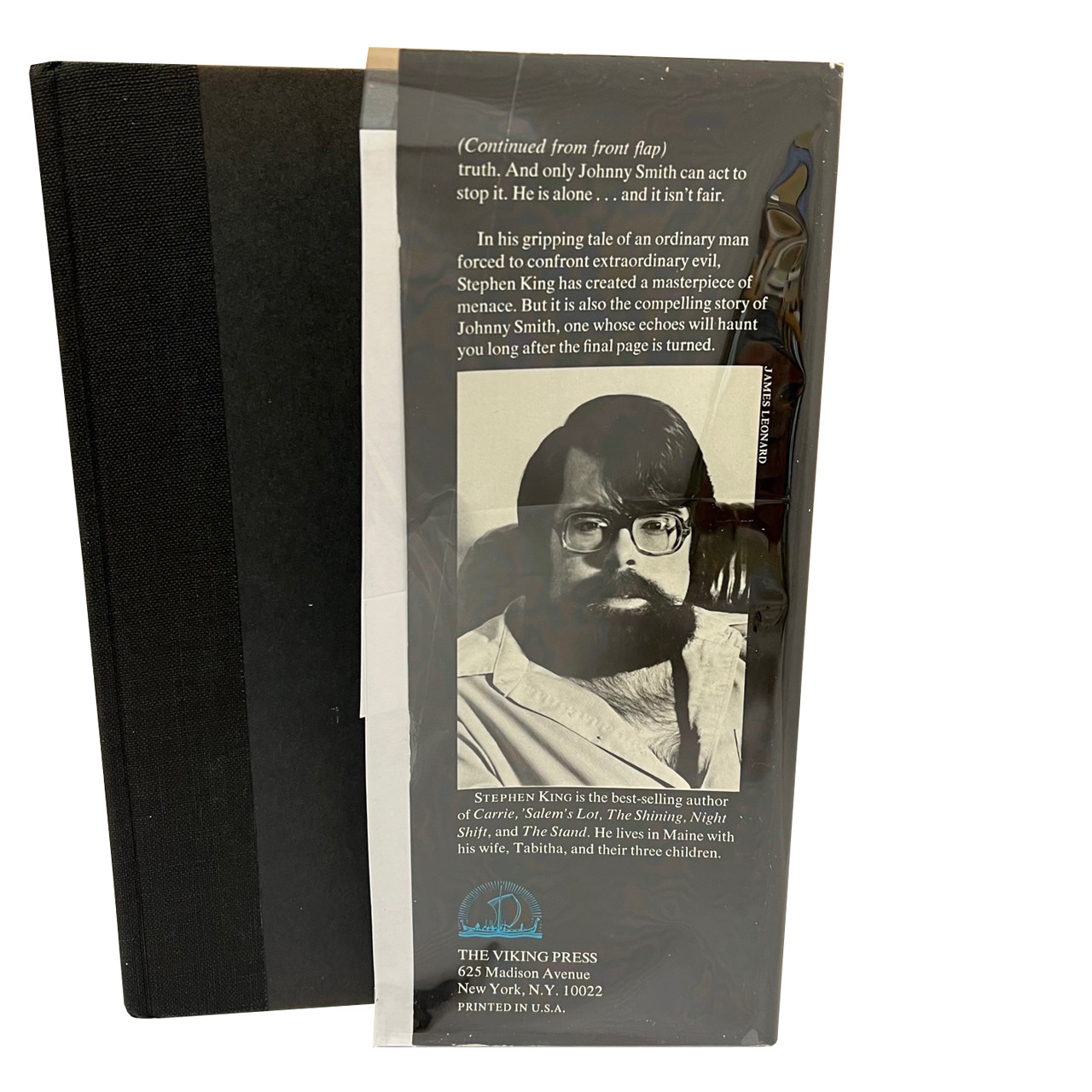 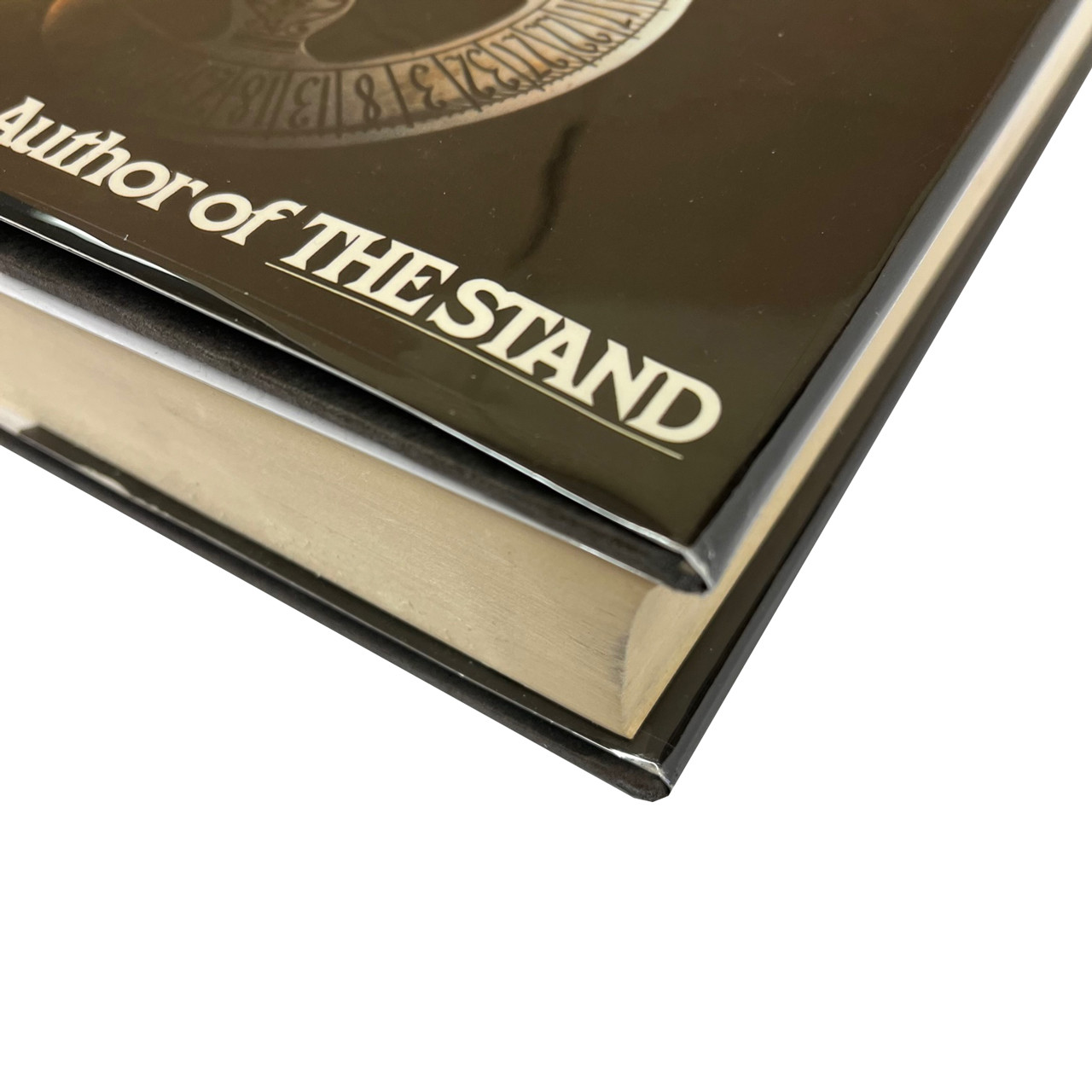 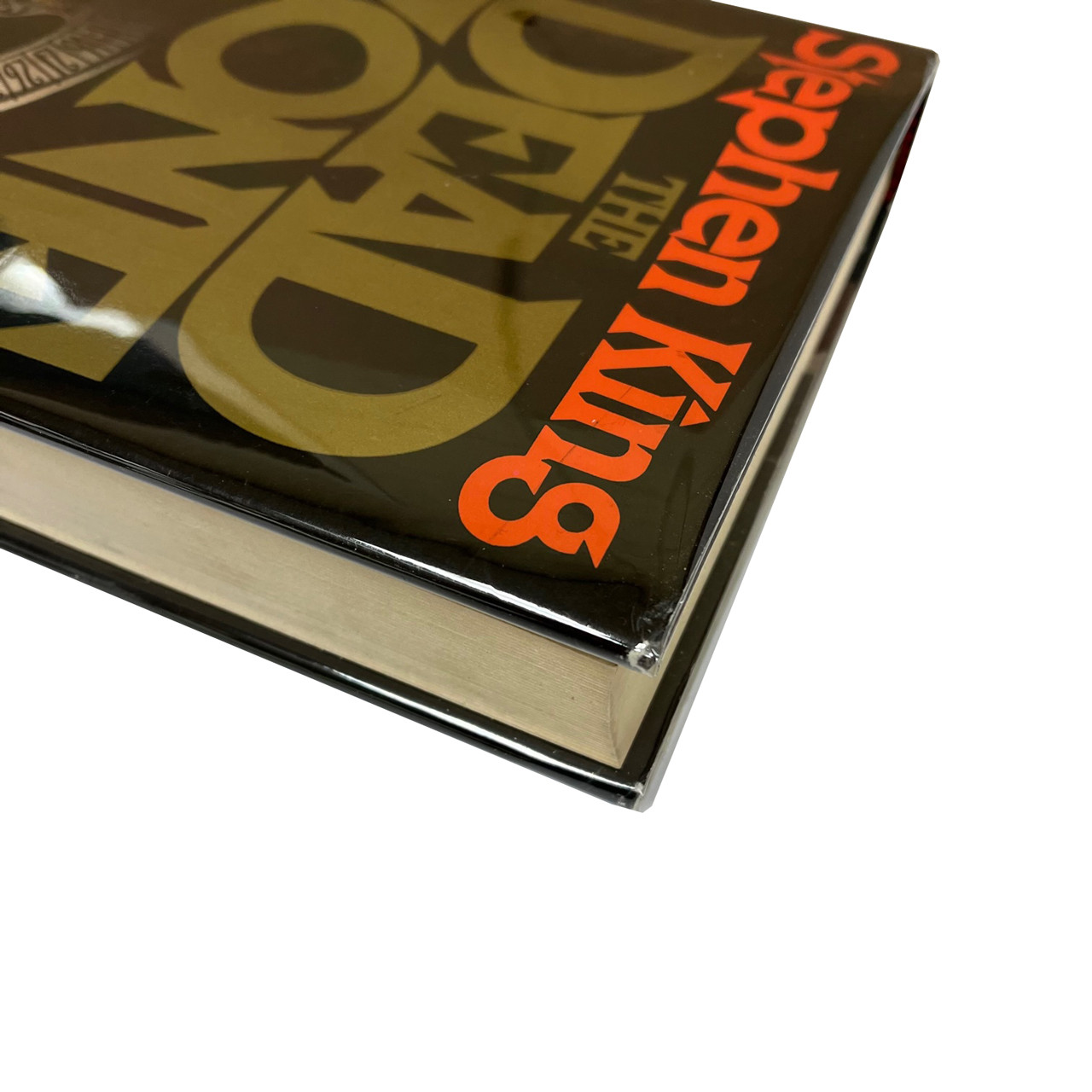 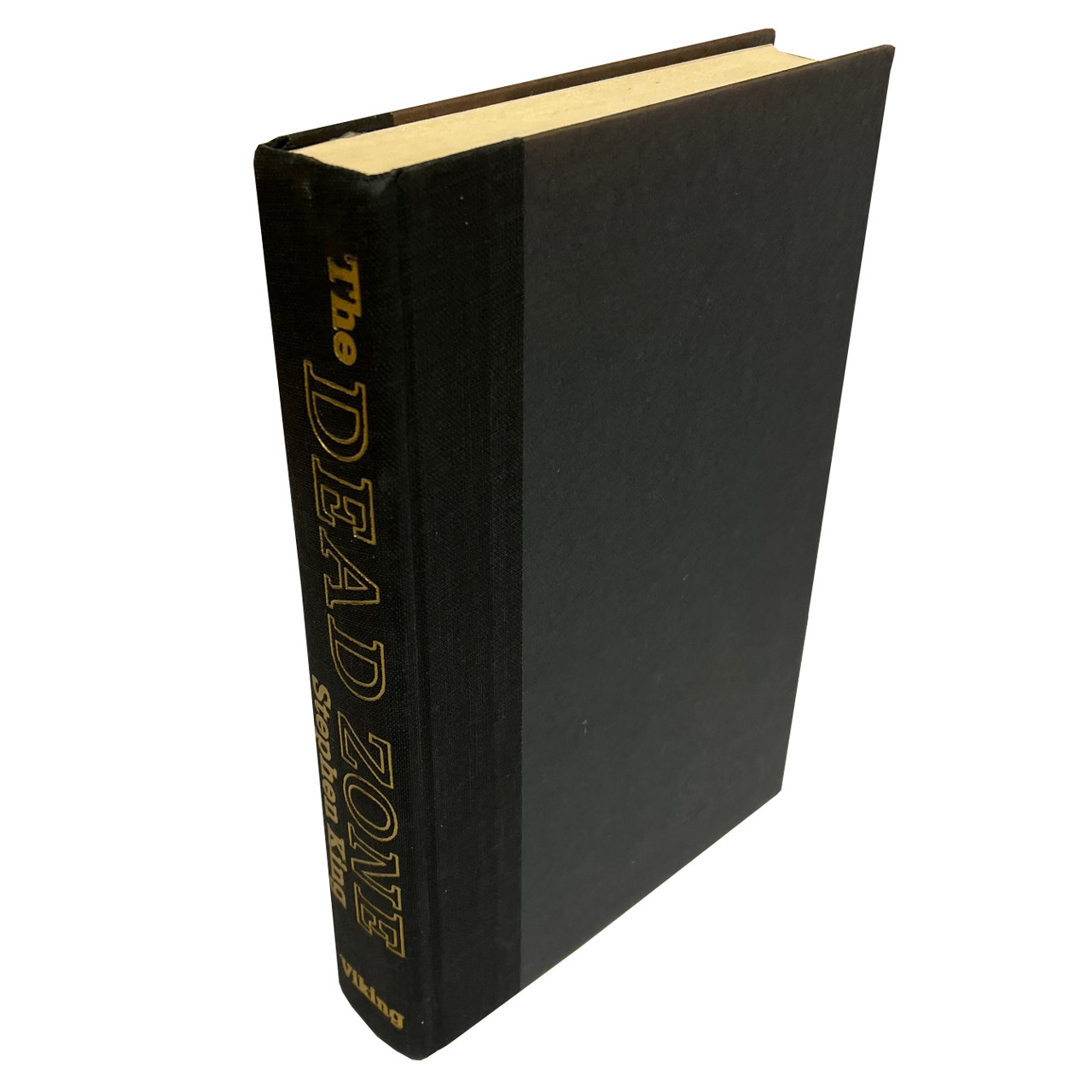 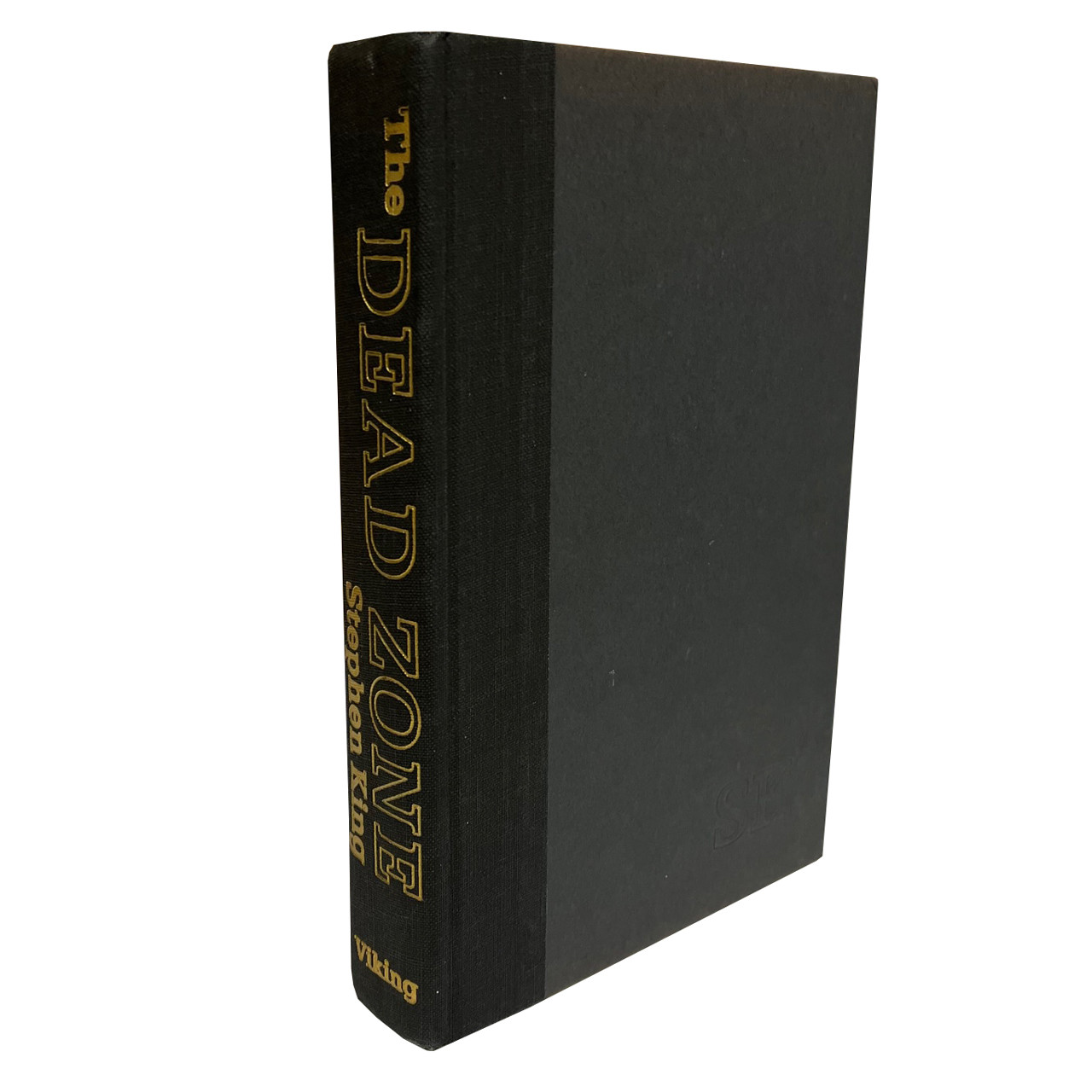 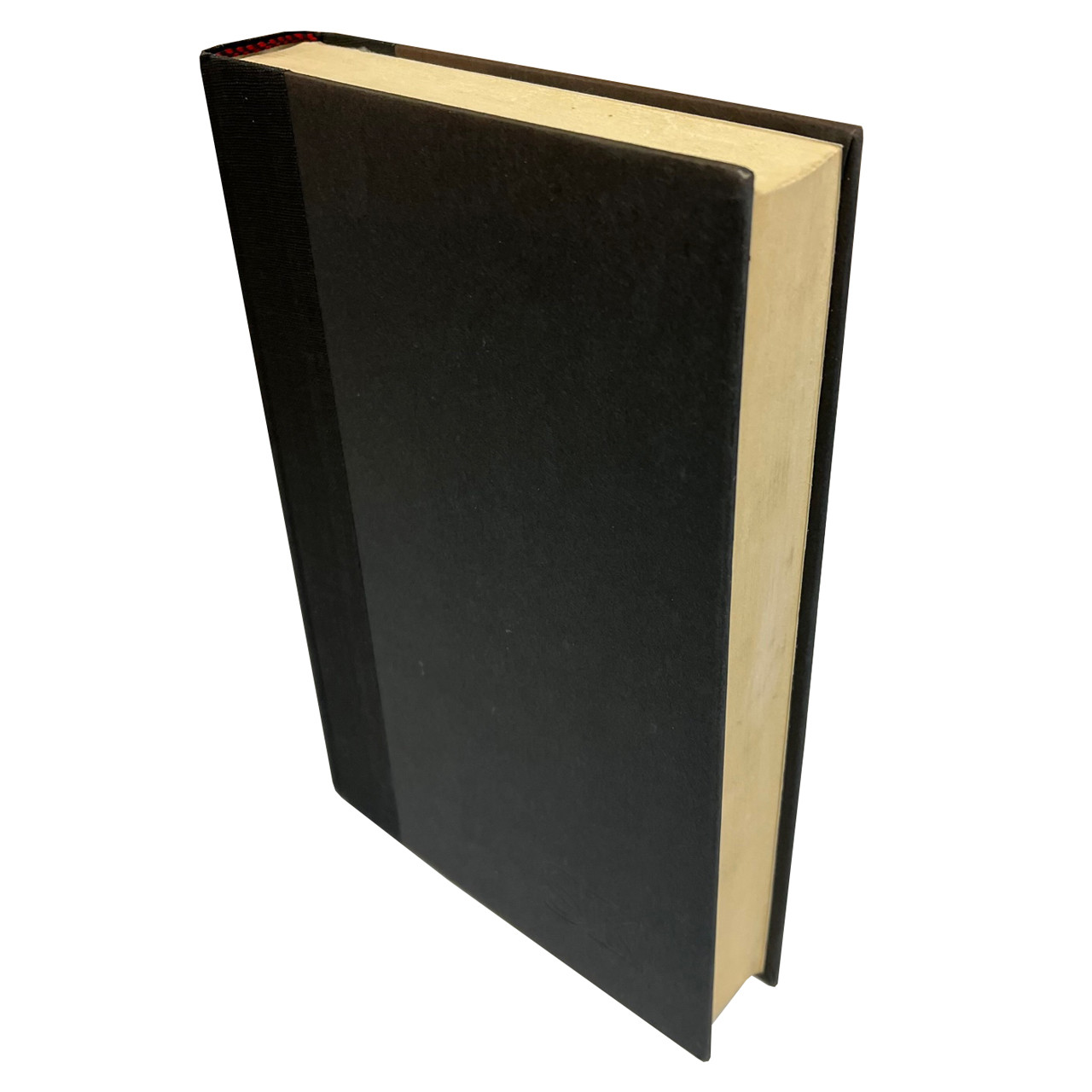 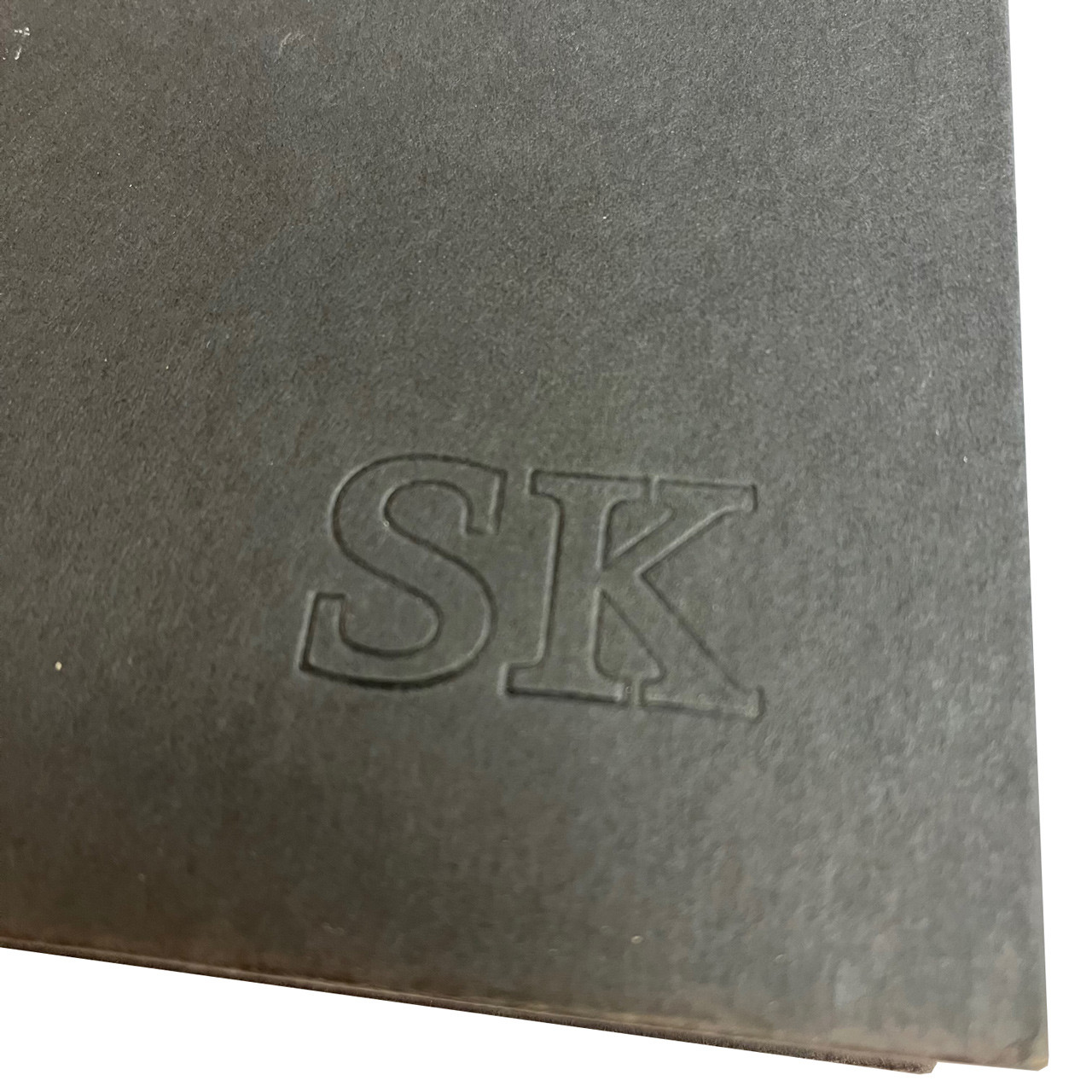 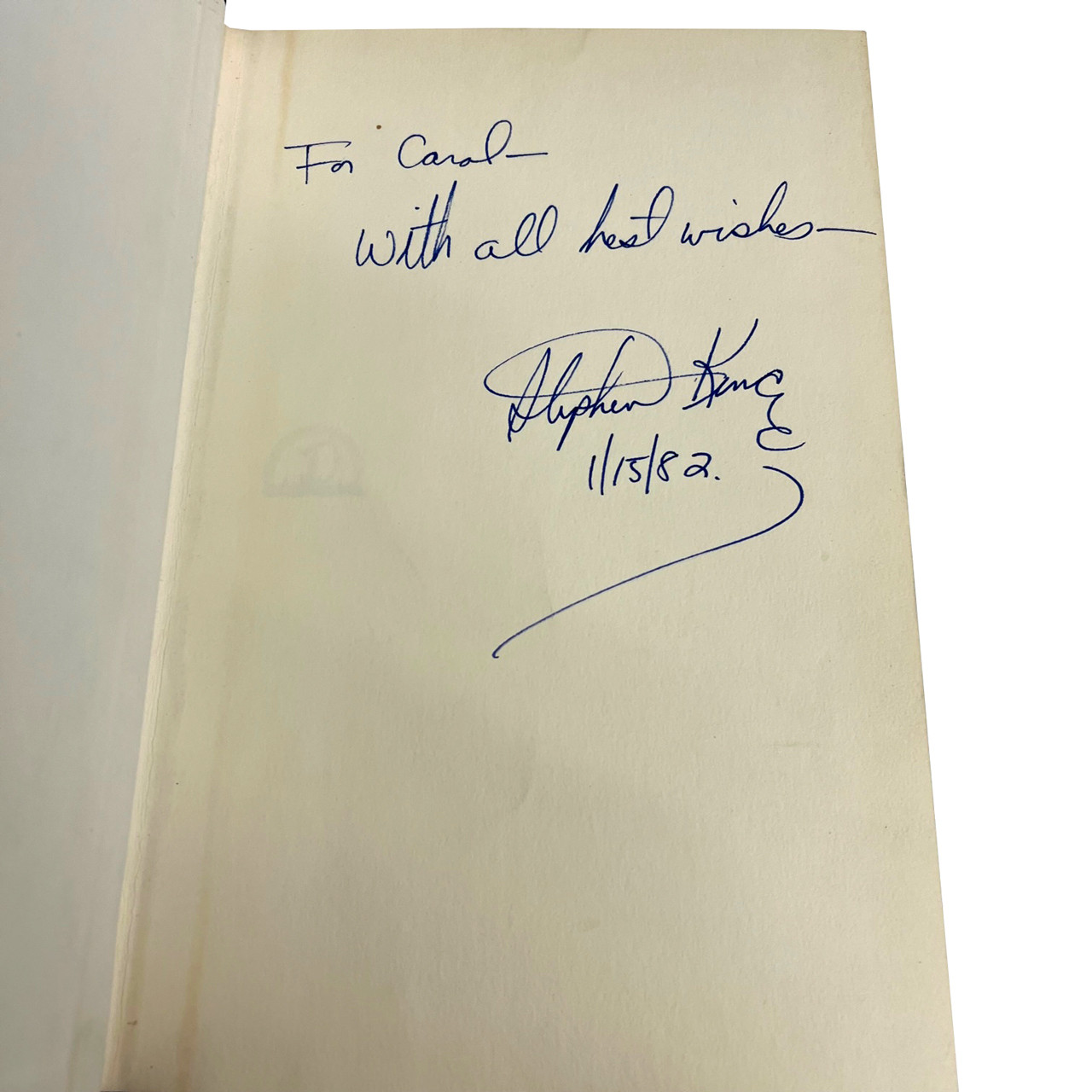 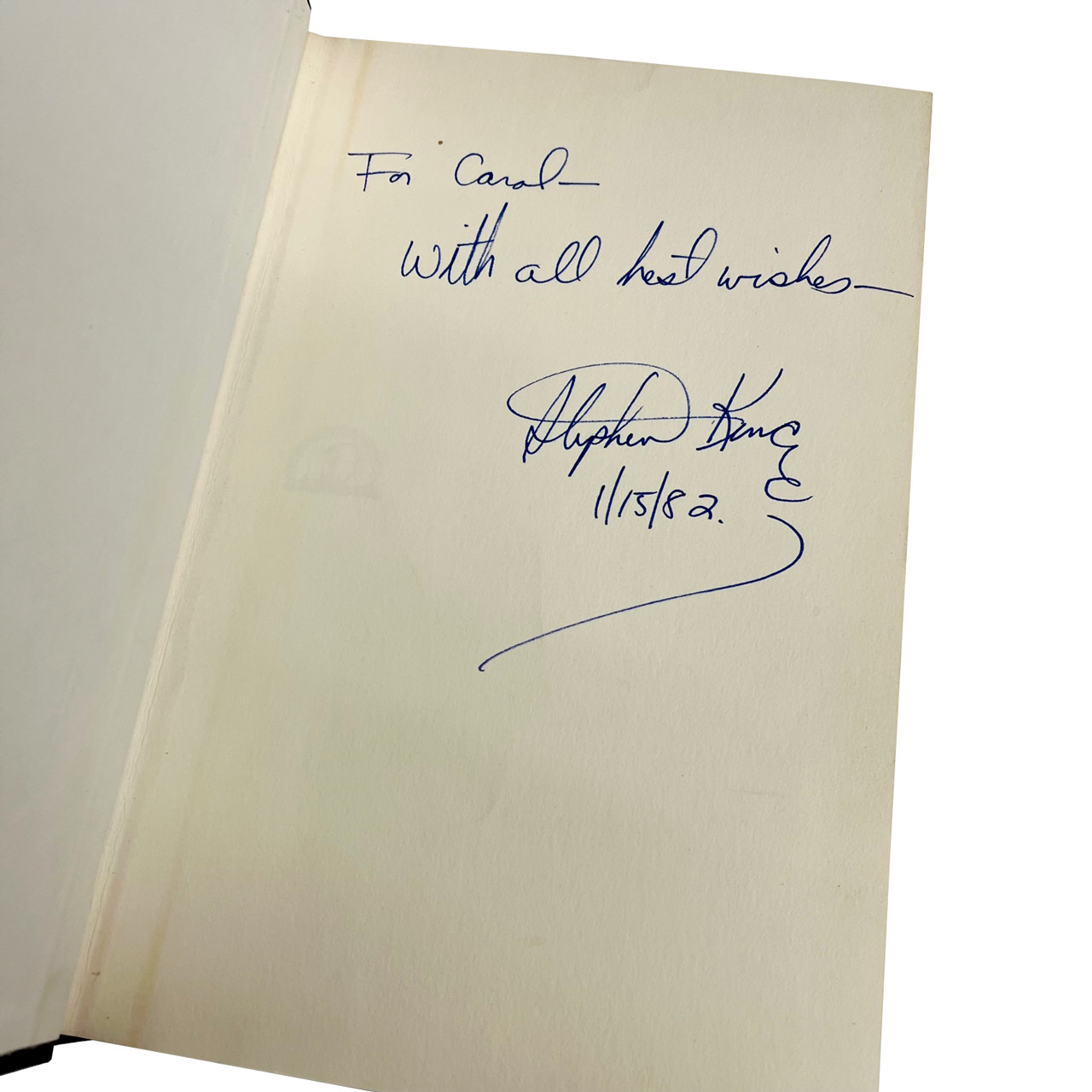 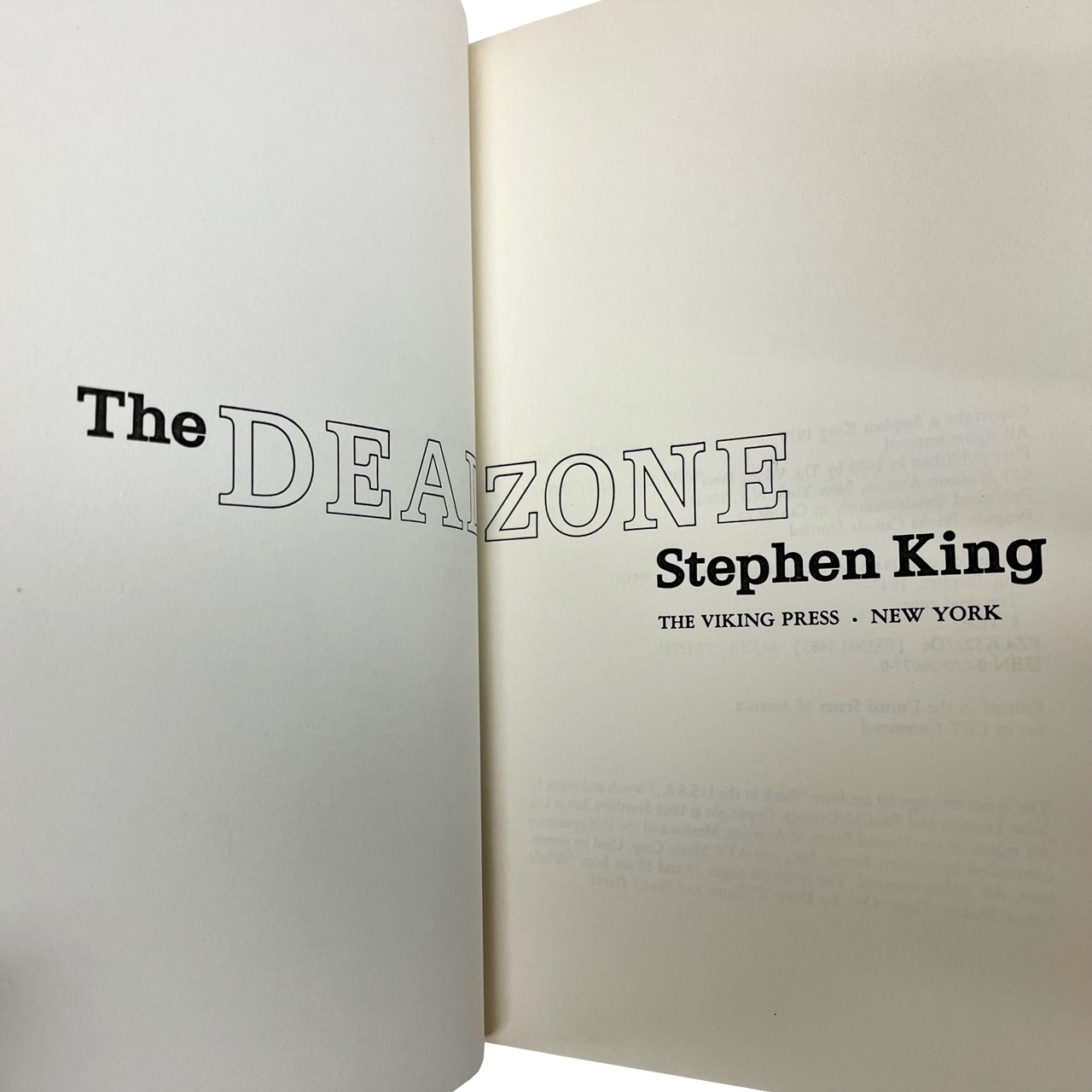 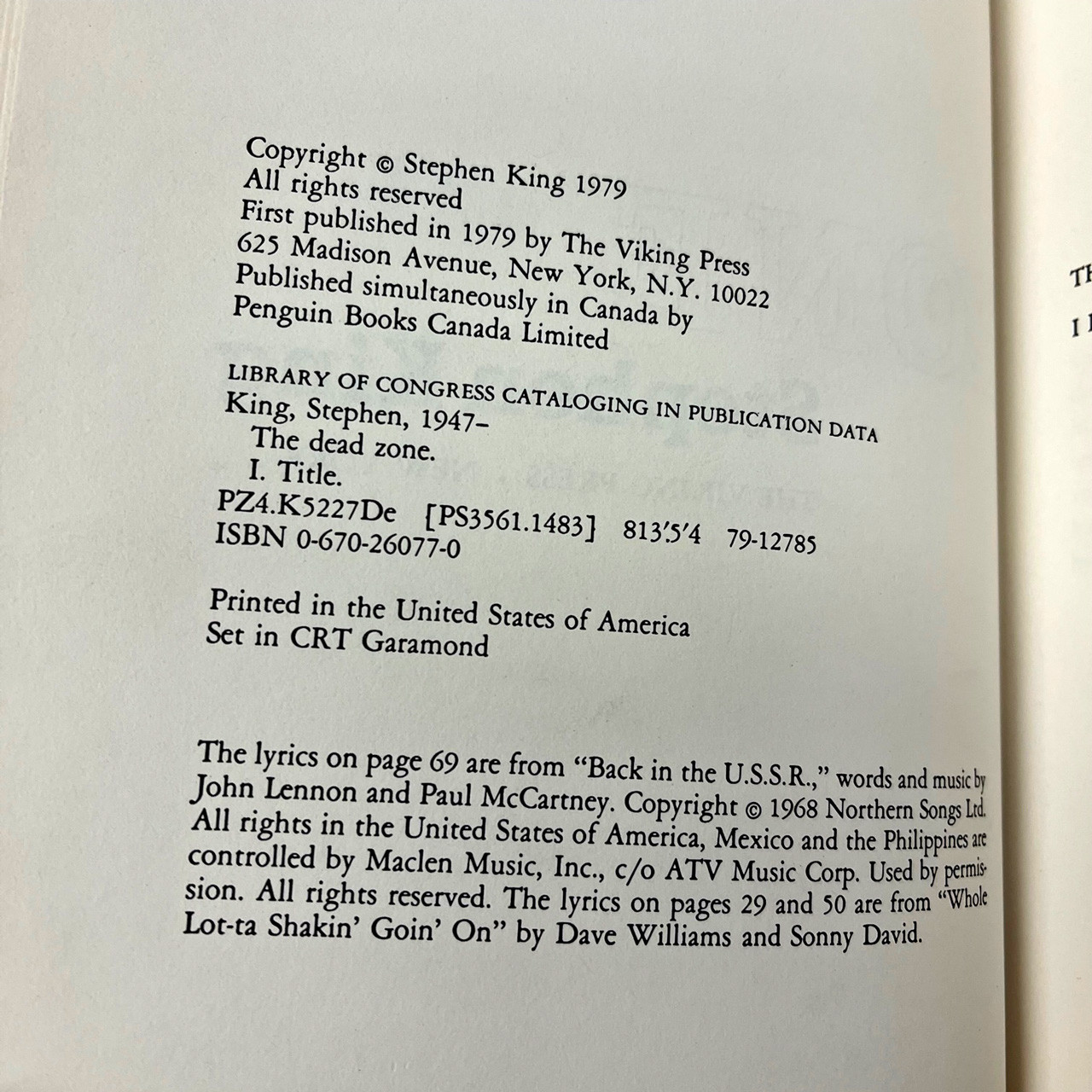 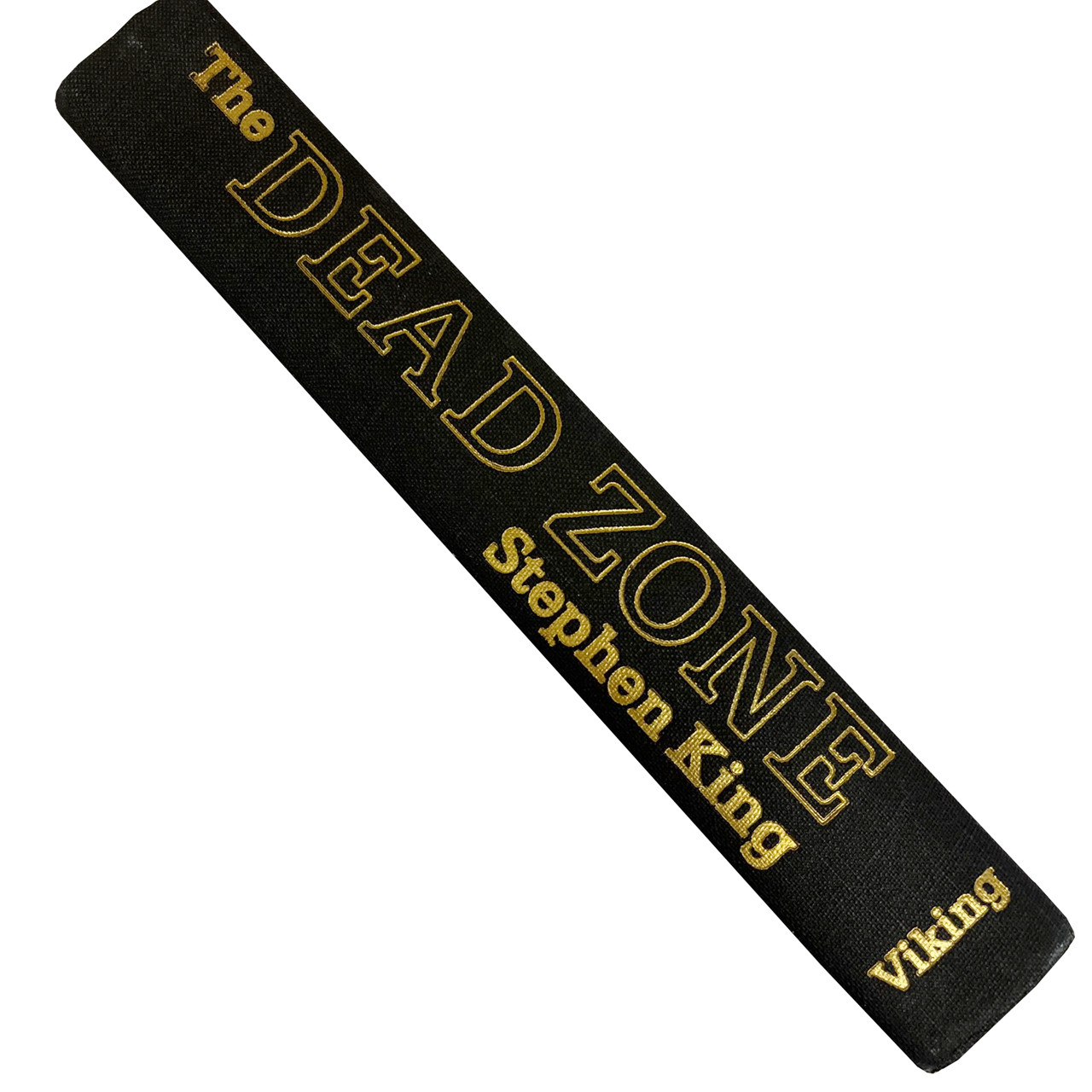 Personally signed and dated by Stephen King in 1982

Stephen King's #1 New York Times bestseller about a reluctant clairvoyant who must weigh his options when he suddenly sees the terrible future awaiting mankind.

"There was only blackness and that universal emptiness... Cold limbo. Johnny Smith stayed there a long, long time."

Signed by Stephen King with a personal inscription on the FFEP (First Free End Paper):

About The Dead Zone

If any of King's novels exemplifies his skill at portraying the concerns of his generation, it's The Dead Zone (1979).

Although it contains a horrific subplot about a serial killer, it isn't strictly a horror novel. It's the story of an unassuming high school teacher, an Everyman, who suffers a gap in time--like a Rip Van Winkle who blacks out during the years 1970-75--and thus becomes acutely conscious of the way that American society is rapidly changing. He wakes up as well with a gap in his brain, the "dead zone" of the title. The zone gives him crippling headaches, but also grants him second sight, a talent he doesn't want and is reluctant to use. The crux of the novel concerns whether he will use that talent to alter the course of history. The Dead Zone is a tight, well-crafted book. When asked in 1983 which of his novels so far was "the best," Stephen King answered, "The one that I think works the best is Dead Zone. It's the one that [has] the most story." --Fiona Webster

The Dead Zone is a science fiction thriller novel by Stephen King published in 1979. The story follows Johnny Smith, who awakens from a coma of nearly five years and, apparently as a result of brain damage, now experiences clairvoyant and precognitive visions triggered by touch. When some information is blocked from his perception, Johnny refers to that information as being trapped in the part of his brain that is permanently damaged, "the dead zone." The novel also follows a serial killer in Castle Rock, and the life of rising politician Greg Stillson, both of whom are evils Johnny must eventually face.

Though earlier King books were successful, The Dead Zone was the first of his novels to rank among the ten best-selling novels of the year in the United States. The book was nominated for the Locus Award in 1980[2] and was dedicated to King's son Owen. The Dead Zone is the first story by King to feature the fictional town of Castle Rock, which serves as the setting for several later stories and is referenced in others. The TV series Castle Rock takes place in this fictional town and makes references to the Strangler whom Johnny helped track down in The Dead Zone.

The Dead Zone is King's seventh novel and the fifth under his own name. The book spawned a 1983 film adaptation as well as a television series.

Stephen King is the author of more than sixty books, all of them worldwide bestsellers. His recent work includes The Institute, Elevation, The Outsider, Sleeping Beauties (cowritten with his son Owen King), and the Bill Hodges trilogy: End of Watch, Finders Keepers, and Mr. Mercedes (an Edgar Award winner for Best Novel and an AT&T Audience Network original television series). His novel 11/22/63 was named a top ten book of 2011 by The New York Times Book Review and won the Los Angeles Times Book Prize for Mystery/Thriller. His epic works The Dark Tower and It are the basis for major motion pictures, with It now the highest grossing horror film of all time. He is the recipient of the 2018 PEN America Literary Service Award, the 2014 National Medal of Arts, and the 2003 National Book Foundation Medal for Distinguished Contribution to American Letters. He lives in Bangor, Maine, with his wife, novelist Tabitha King.

Hardcover: Near Fine. Appears unread with a square and tight spine. Sharp corners that are not bumped. Some light marks to page edges. No other marks, writings or stamps. No attached bookplates or indication of any removed. Some yellowing to the page edges. Short chip to bottom edge of cover. Boards are flat and clean. Spine graphics are clear and not faded.

Dust-Jacket: Near Fine. Free of any closed or open tears. Some light chipping to extremities. The graphics are clear and not faded. No stains. Light crease to top of flap. Original price of $11.95 has not been clipped. Archival acid-free Brodart sleeve. Photos of actual item.