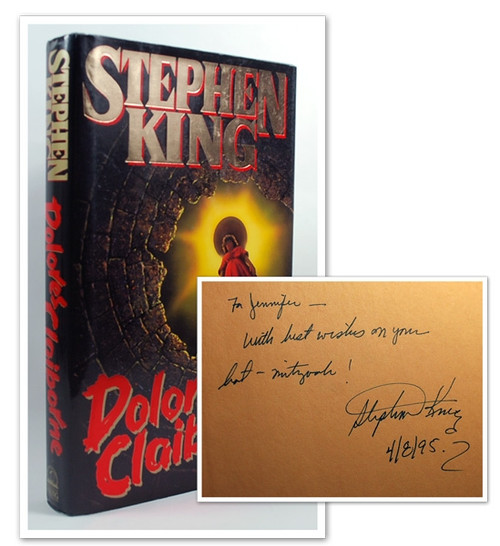 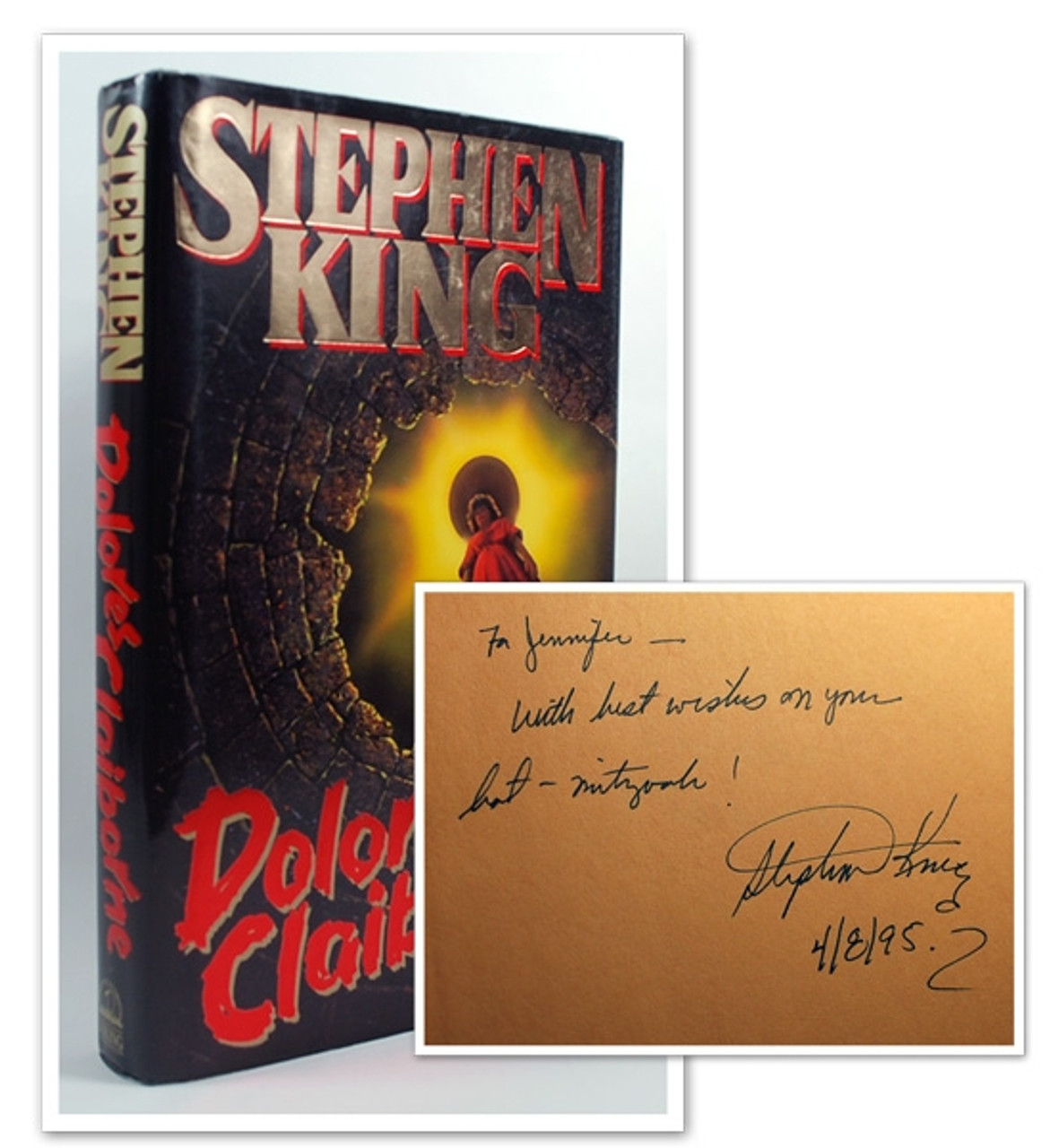 Narrated by the title character, this unique King novel reads as one continuous narrative, with no chapters or section breaks. A mesmerizing crime novel with elements of horror. Basis for the 1995 film of the same name, starring Kathy Bates, Christopher Plummer and Jennifer Jason Leigh.

Seldom found signed, especially with such a unique inscription. A very fine and highly collectible copy. This first edition has been personally hand SIGNED and inscribed by Stephen King on the front free-endpaper:

With best wishes on your

Condition: Fine/Fine. A wonderful bright clean copy with straight boards. No markings, writings, or stampings. No attached bookplates or signs of any removed. The dust jacket is is bright and clear, free of edge wear. A well-cared for book, protected from any potential damage. This book stands out as having had excellent care. Square and tight spine. Not price-clipped.

Photos of the actual item.

More of a mystery than a horror novel, Dolores Claiborne contains only the briefest glances at the supernatural. The novel presents Stephen King as a writer experimenting with style and narrative, time and perspective. Fans looking for a skin-crawling, page-turning fright or an undead bloodbath will be disappointed, but a patient reader willing to savor King's leisurely study of character and island life will find many rewards. And all of this is not to say that the book is without suspense.

The story unfolds in one continuous chapter, told in the first person by the cranky, 65-year-old housekeeper, Dolores, who is explaining to police officers and a stenographer how and why she killed her husband, Joe, 30 years ago. At the same time, in her rambling monologue, she insists that she did not kill her longtime employer, Vera Donovan--notwithstanding what the residents of Little Tall Island may be whispering. Joe was a drinker, and, as Dolores gradually argues, he deserved to die for the horrifying crimes he committed against his family. But Vera, despite her cantankerous disposition as a lady governing her decaying estate with her precise rules about even the most mundane household chore ("Six pins! Remember to use six pins! Don't you let the wind blow my good sheets down to the corner of the yard!"), was a good woman--or at least not an evil one. She was the woman who hired the young Dolores and kept her on even after Dolores got pregnant again. Dolores cleaned and cared for her even as the old matron faded into senility.

Dolores Claiborne is a rich novel that recalls the regionalist writing of the turn of the century. It is a fine place for a skeptical newcomer--put off by King's reputation for outright terror--to start. And for fans, it is a book that offers new insights into an author who's an old favorite.