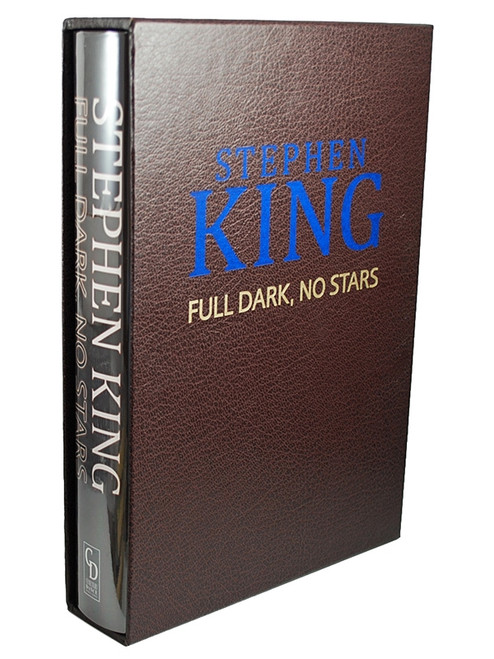 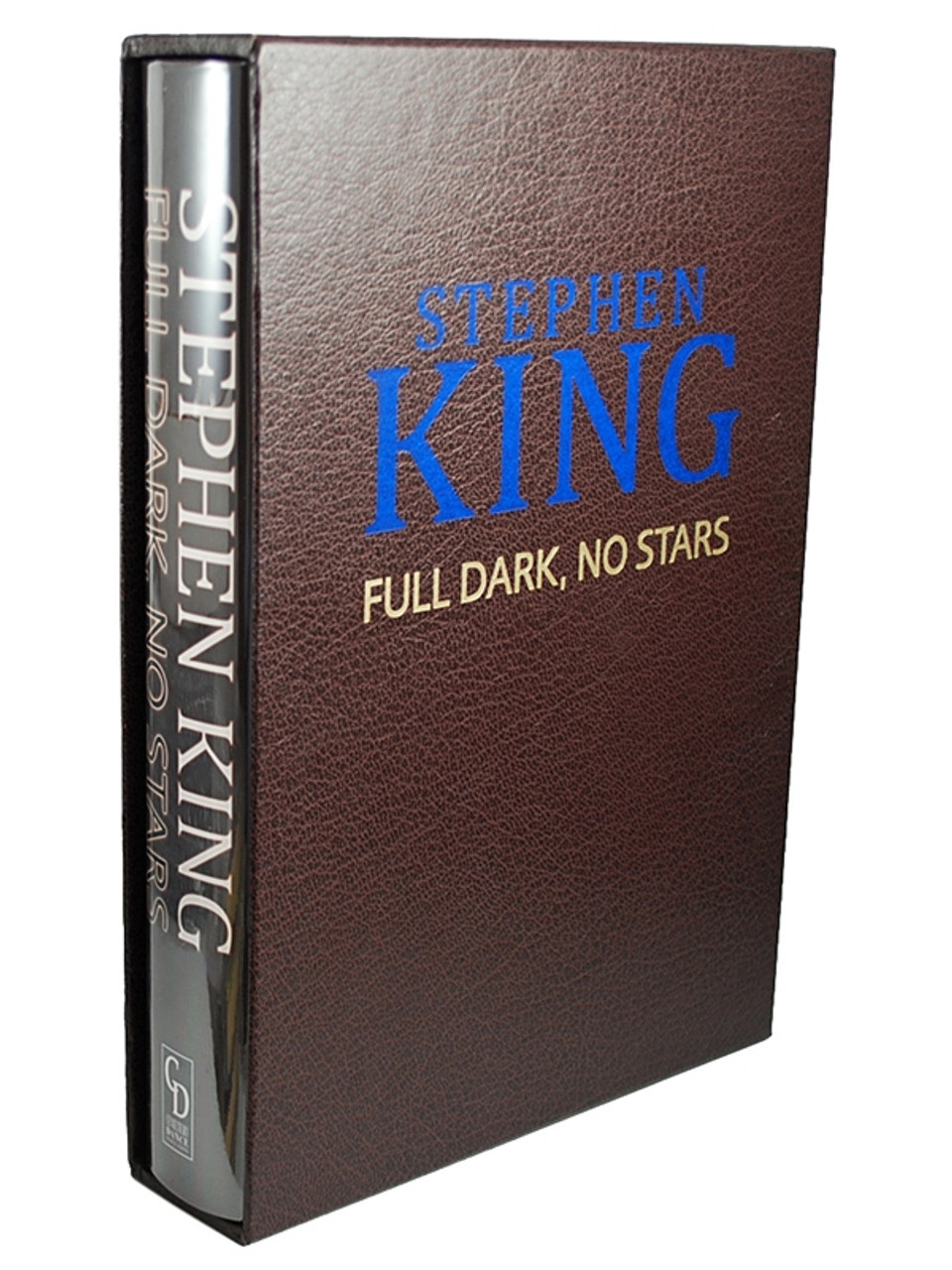 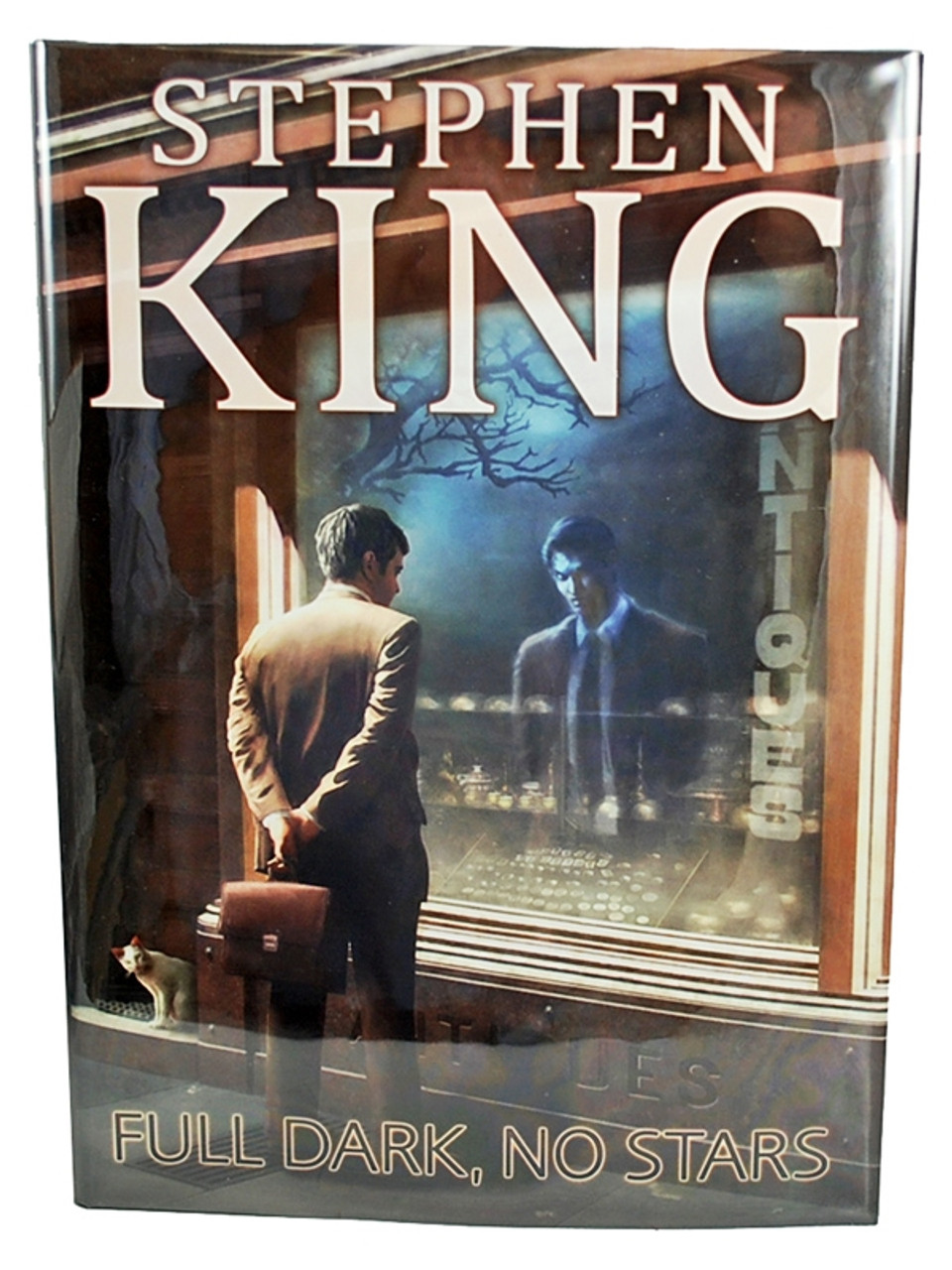 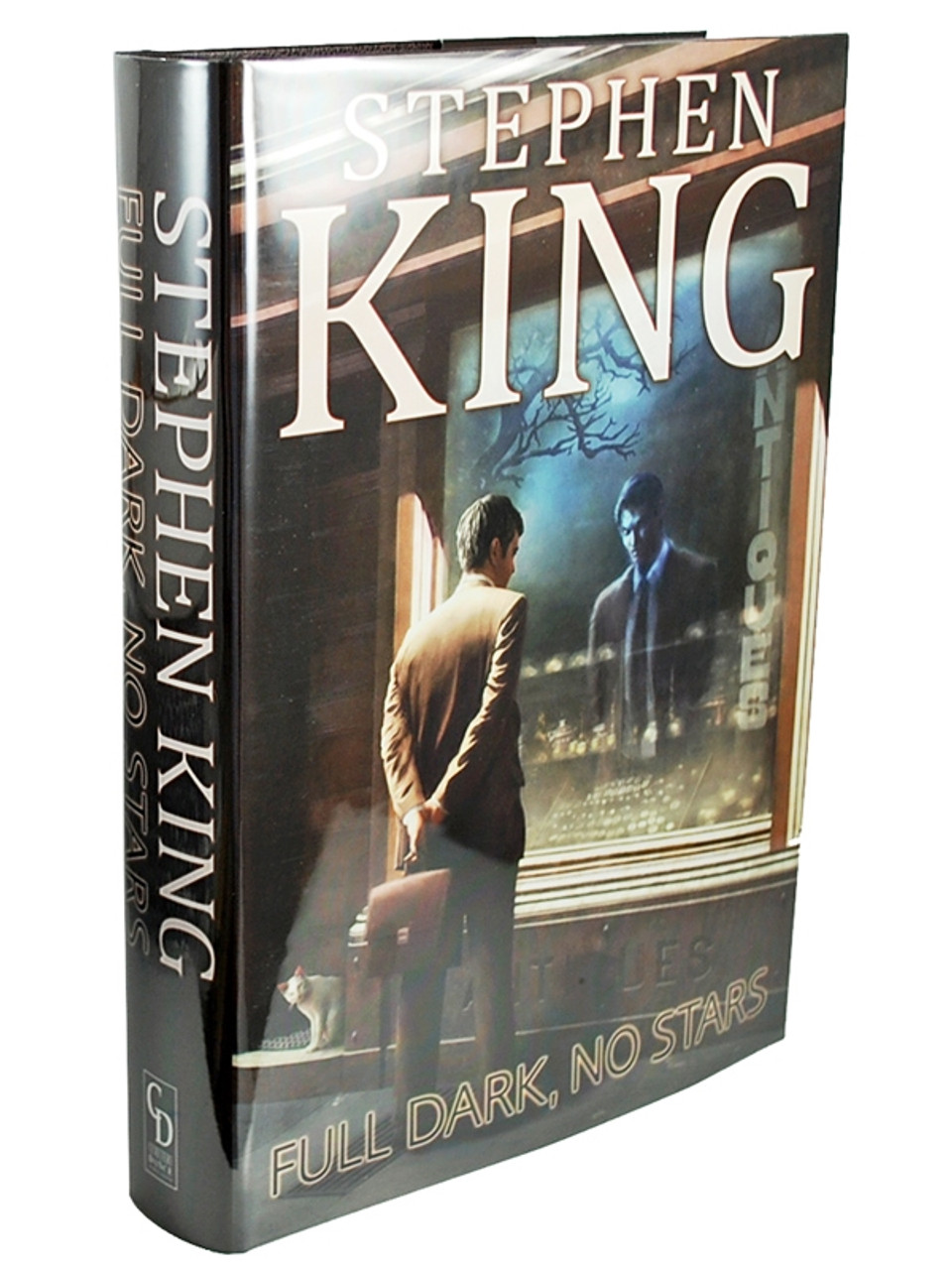 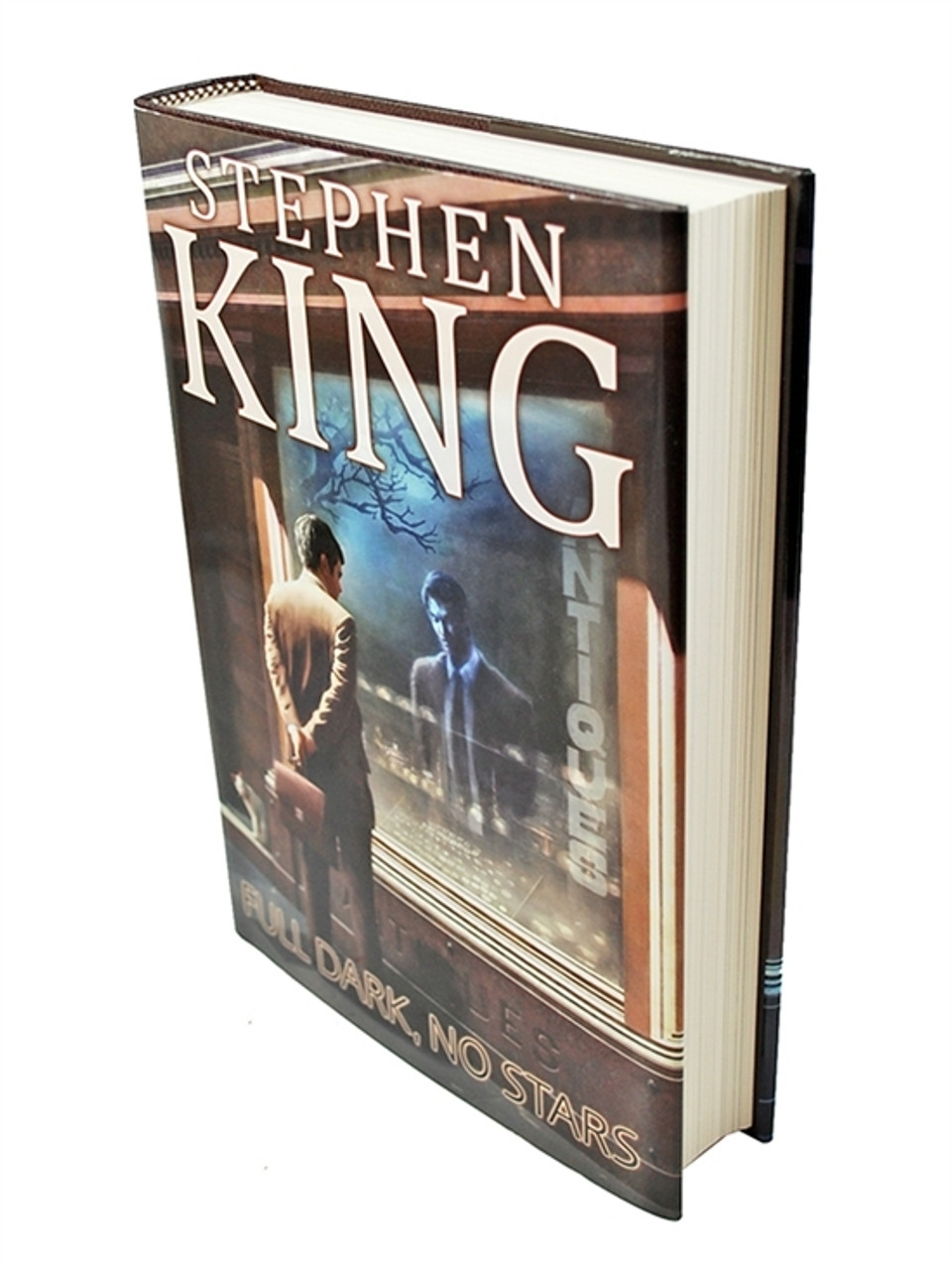 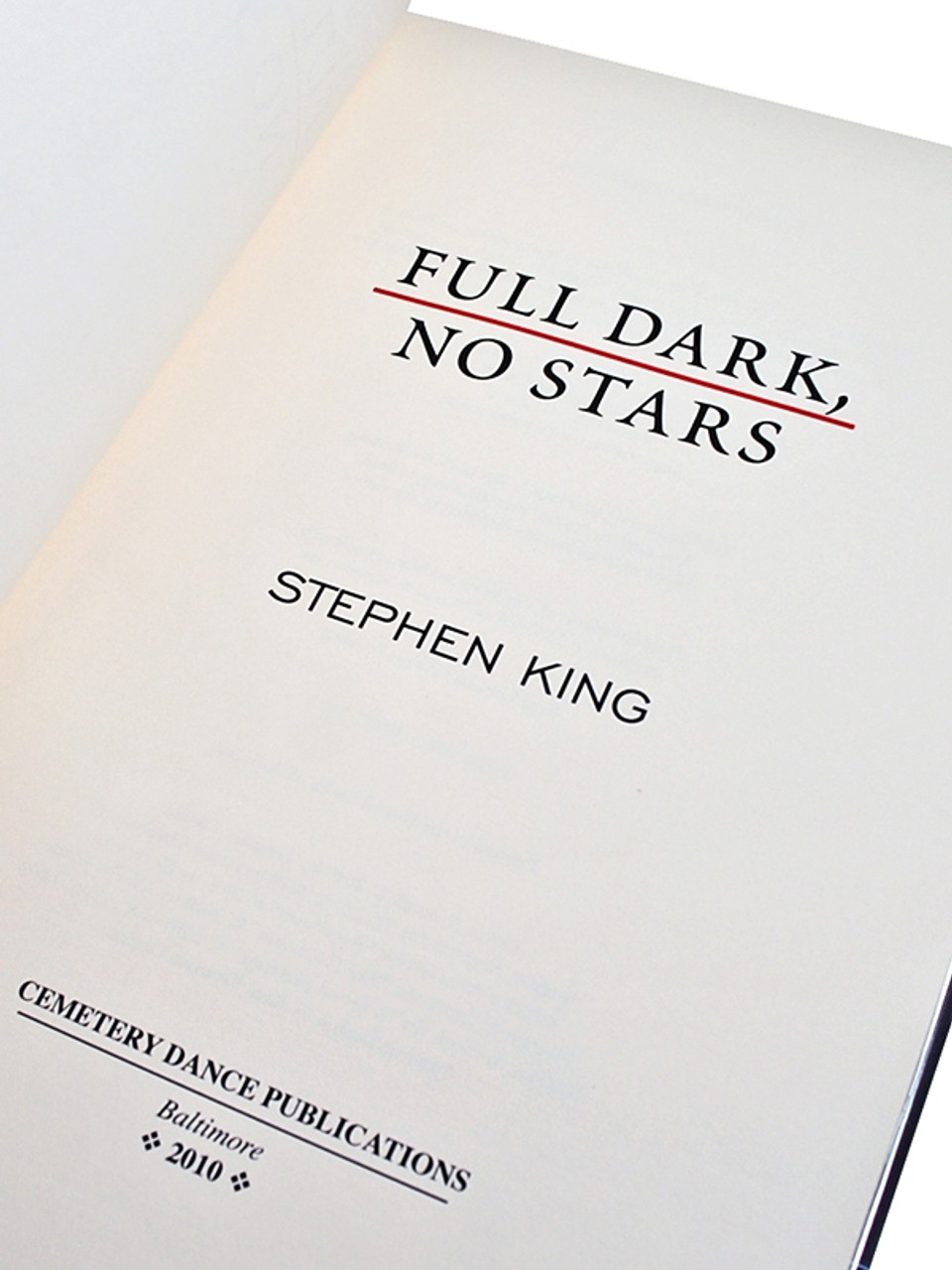 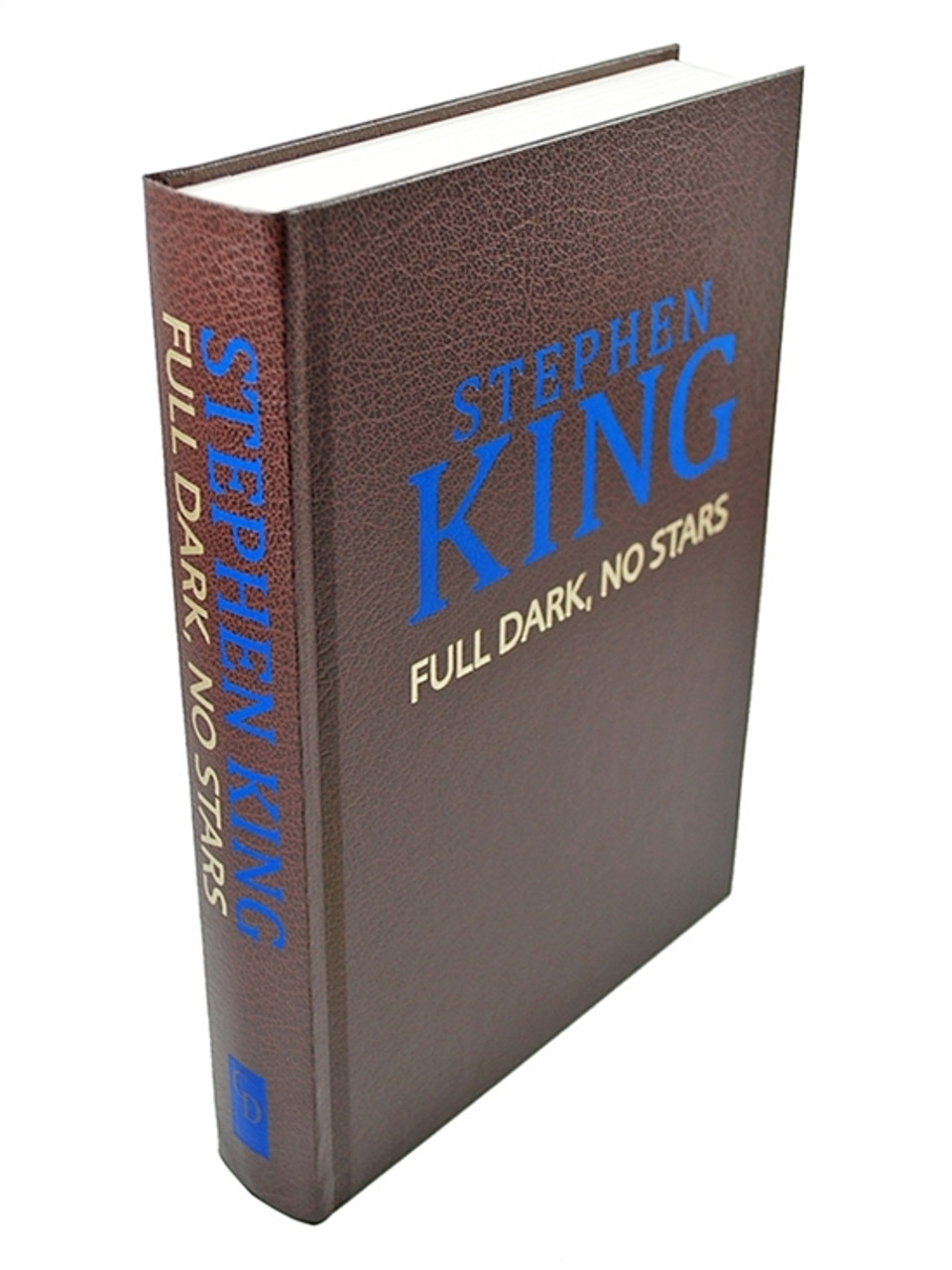 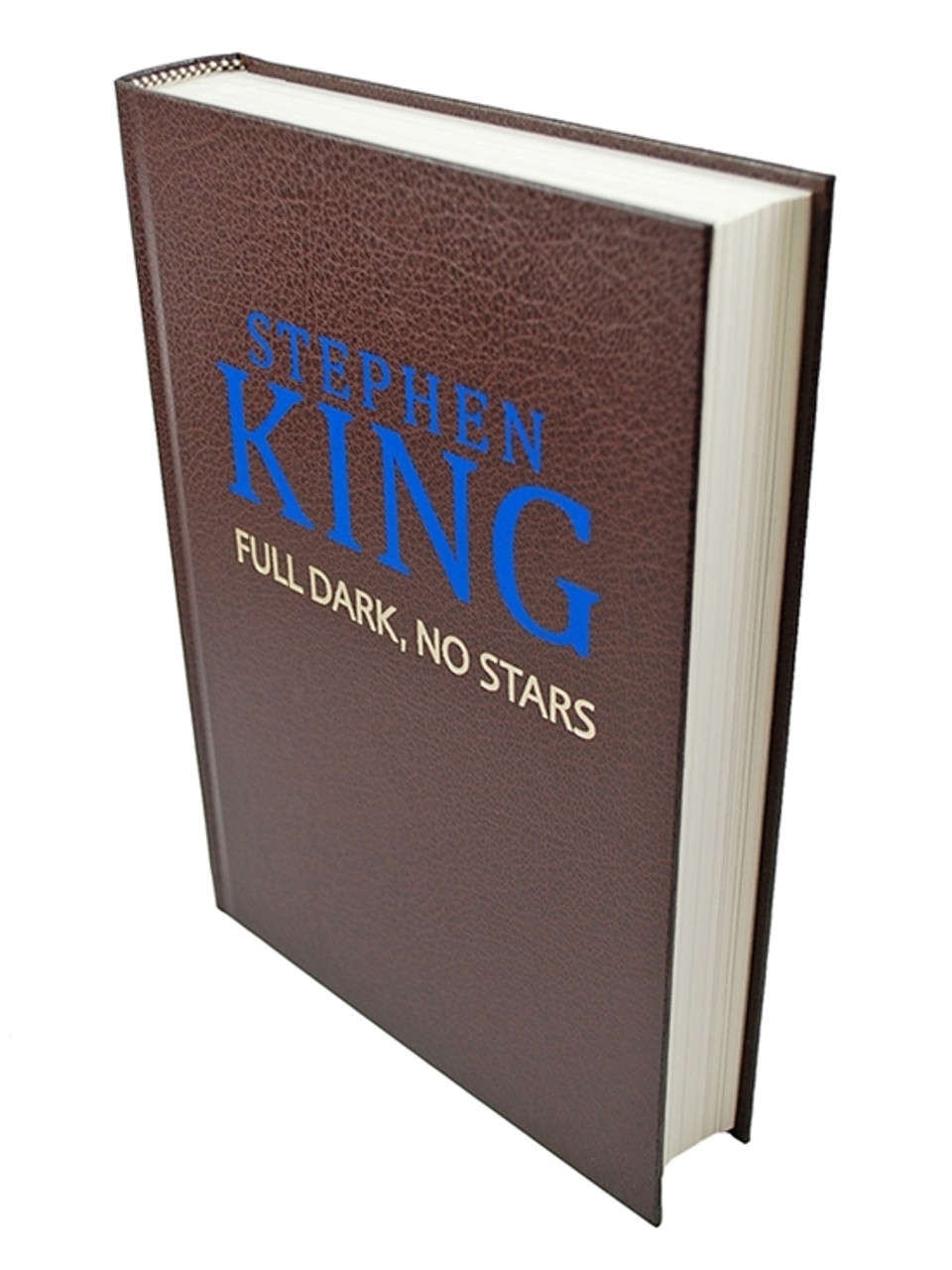 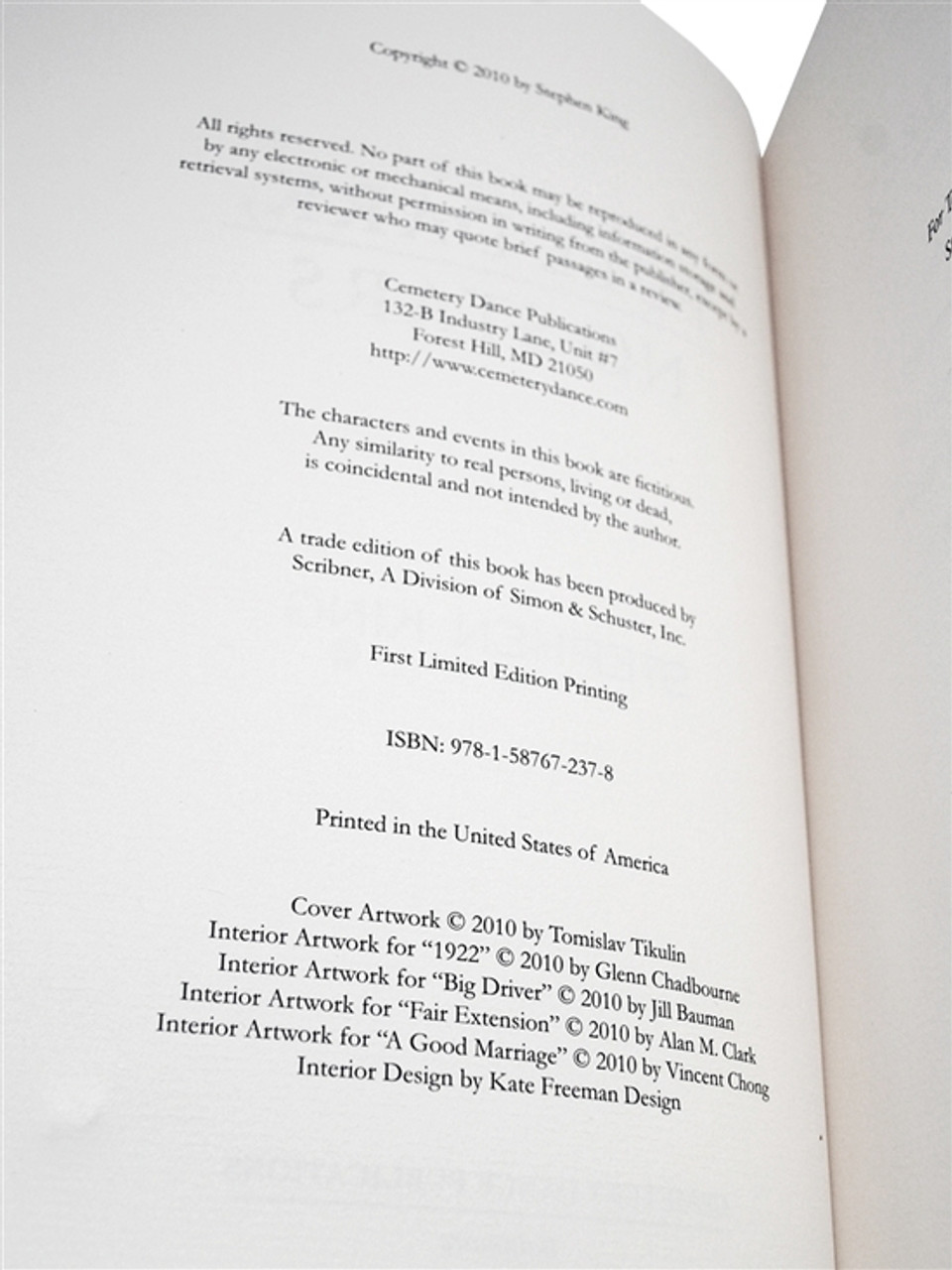 Cemetery Dance Publications. 2010. "Full Dark, No Stars" by Stephen King. First limited edition. This limited edition is the Slipcased Oversized Hardcover Gift Edition of only 1,750 copies. Printed in two colors with two color hot foil stamping and marbled endpapers. Please note, this edition is not signed by the author. Very Fine without any flaws in slipcase the same. 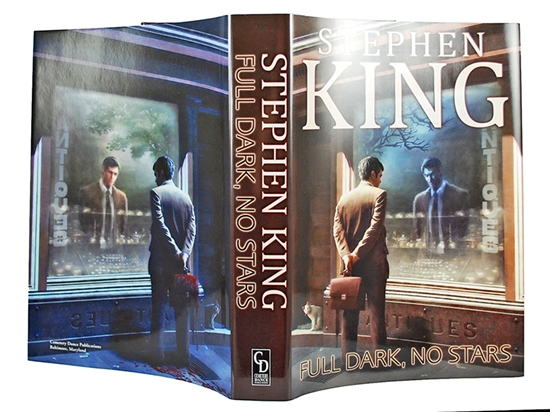 About "Full Dark, No Stars"

"I believe there is another man inside every man, a stranger . . ." writes Wilfred Leland James in the early pages of the riveting confession that makes up "1922," the first in this pitch-black quartet of mesmerizing tales from Stephen King. For James, that stranger is awakened when his wife, Arlette, proposes selling off the family homestead and moving to Omaha, setting in motion a gruesome train of murder and madness.

When her husband of more than twenty years is away on one of his business trips, Darcy Anderson looks for batteries in the garage. Her toe knocks up against a box under a worktable and she discovers the stranger inside her husband. It's a horrifying discovery, rendered with bristling intensity, and it definitively ends a good marriage. 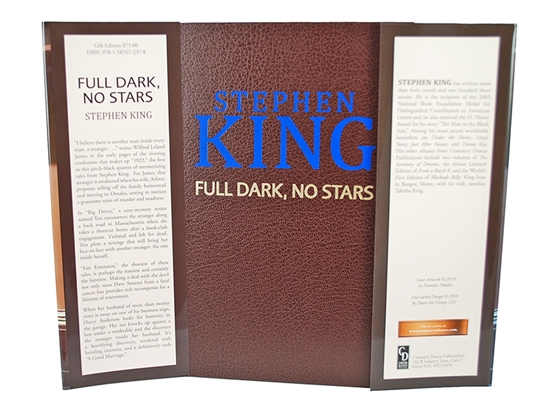 "King [is] the most wonderfully gruesome man on the planet - The pages practically turn themselves."
- Carol Memmott, USA Today

"Full Dark, No Stars is an extraordinary collection, thrillingly merciless, and a career high point."
-The Telegraph (UK)

"Just as gripping as his epic novels."
-St. Louis Post-Dispatch

This book was originally published in three states (This is the Gift Edition in bold):

-Oversized Signed Hardcover Lettered Edition of only 52 copies printed in two colors and bound in two different fine materials with gilded page edges, a satin ribbon page marker, imported endpapers, and protected in a custom deluxe traycase, signed by Stephen King and all of the artists

Stephen King has written more than forty novels and two hundred short stories. He is the recipient of the 2003 National Book Foundation Medal for Distinguished Contribution to American Letters and he also received the O. Henry Award for his story "The Man in the Black Suit." Among his most recent worldwide bestsellers are Under the Dome, Cell, Lisey's Story, and Duma Key. His other releases from Cemetery Dance Publications include two volumes of The Secretary of Dreams, the deluxe Limited Edition of From a Buick 8, the deluxe Limited Edition of Full Dark, No Stars, and the World's First Edition of Blockade Billy. King lives in Bangor, Maine, with his wife, novelist Tabitha King.

VERY FINE GUARANTEED . A wonderful bright clean copy free of any markings, writings, or stamps inside the book. See photos. Sharp corners that have not been bumped. Tight binding, most likely an unread book.

Low Number 47 of only 725, personally signed and dated by Stephen King on July 5, 1980. If you are looking for a signed limited edition of FIRESTARTER, then this is the one. Fine throughout,...