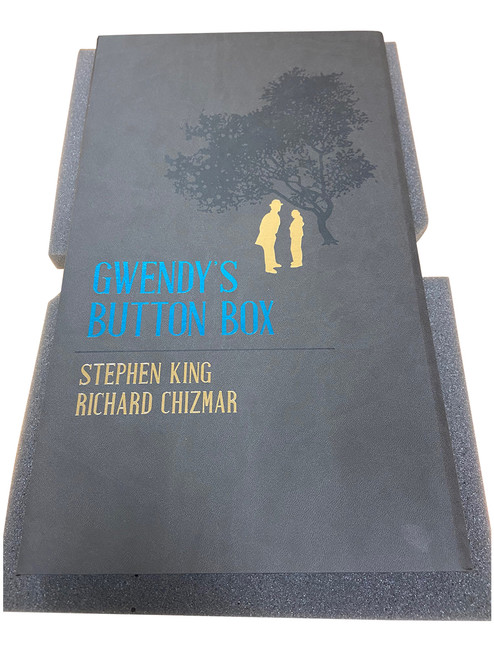 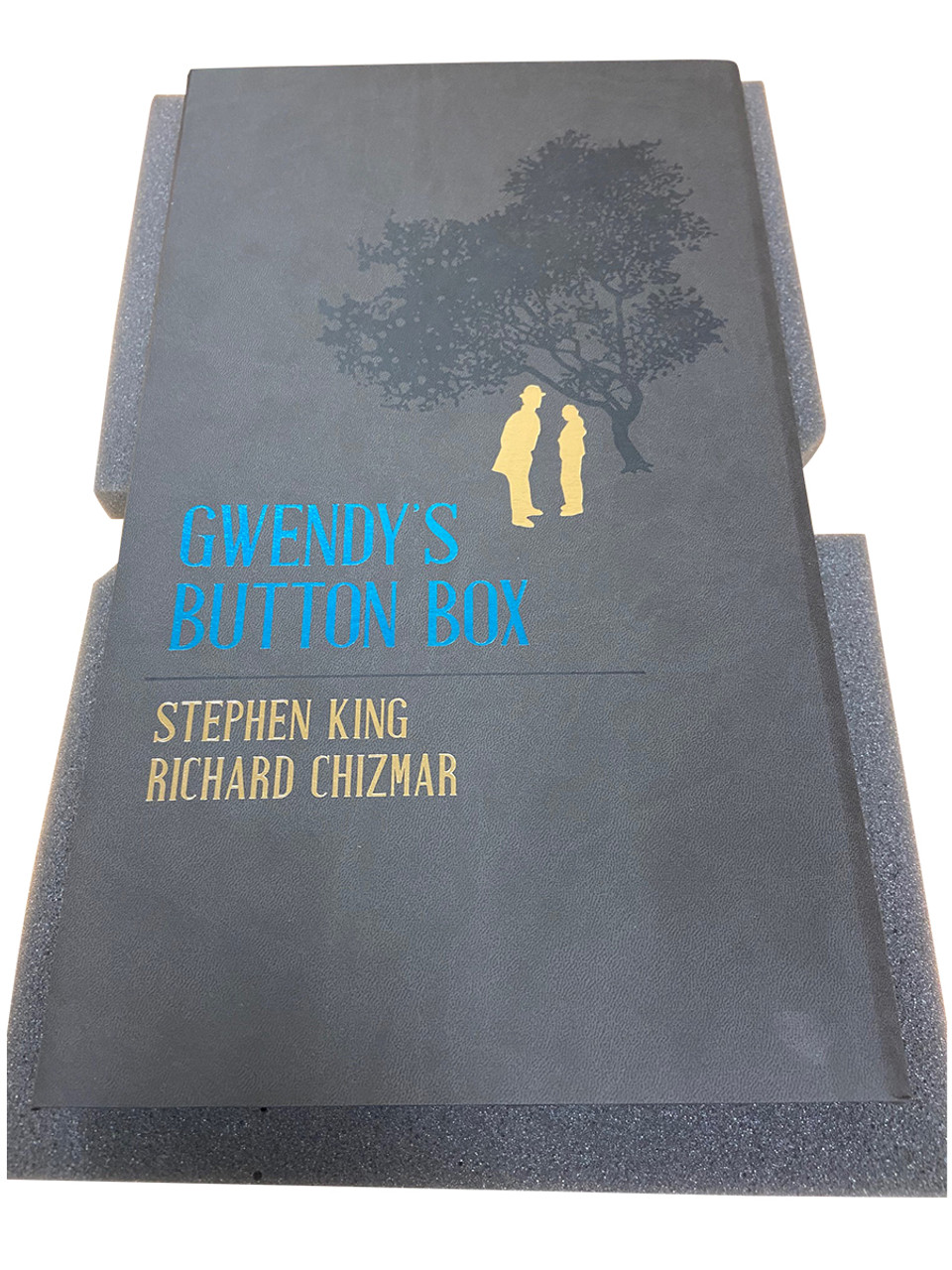 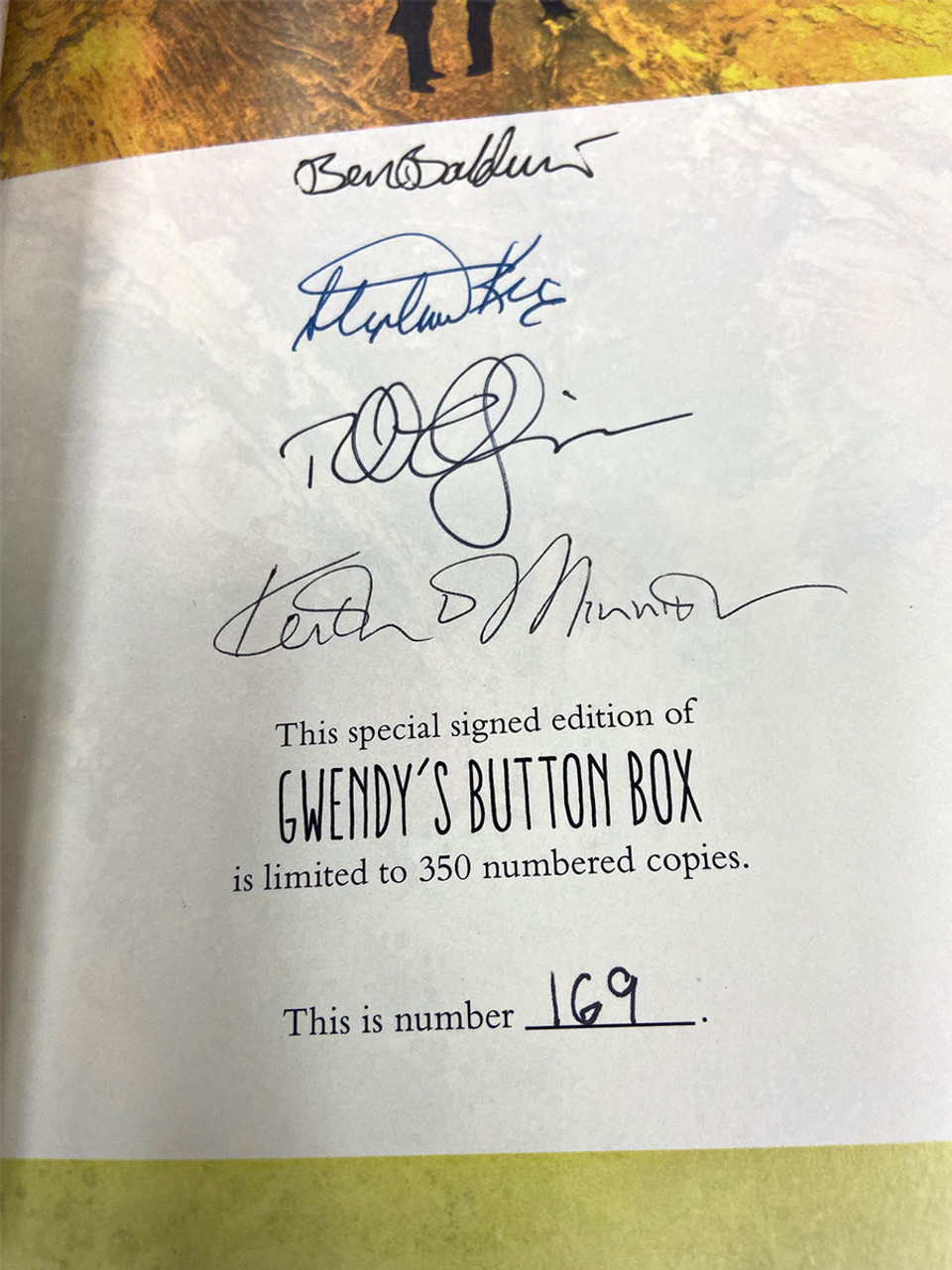 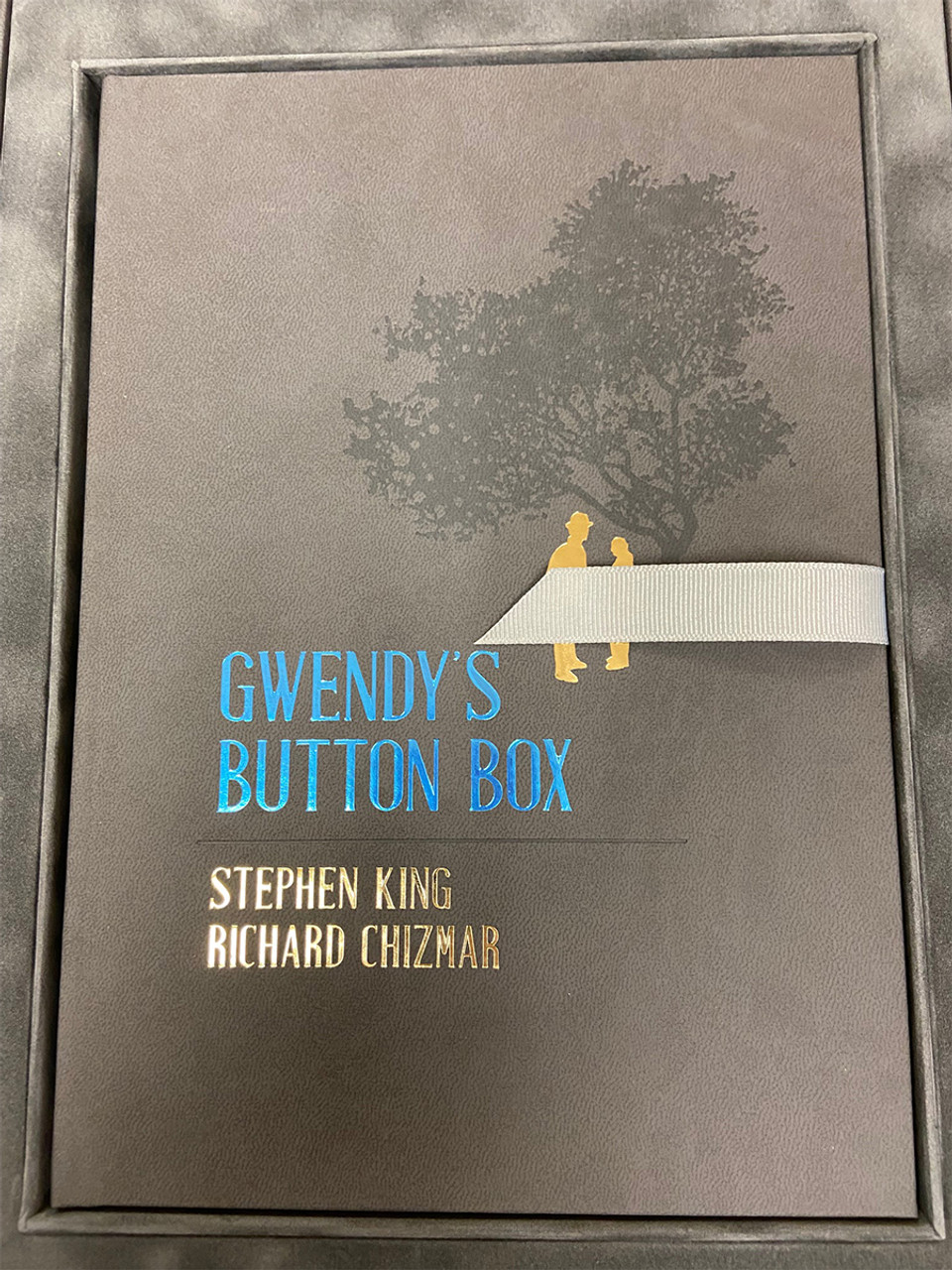 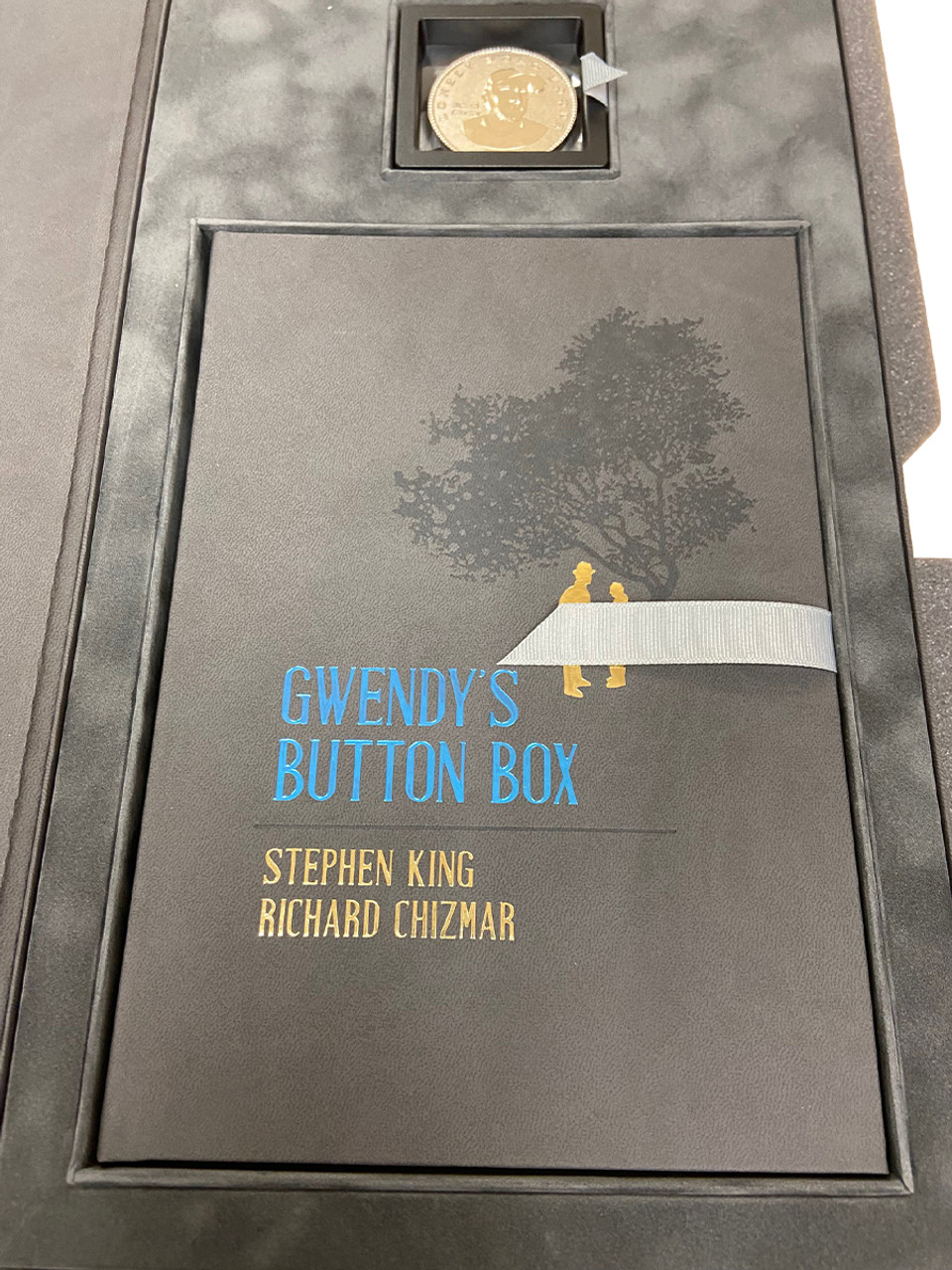 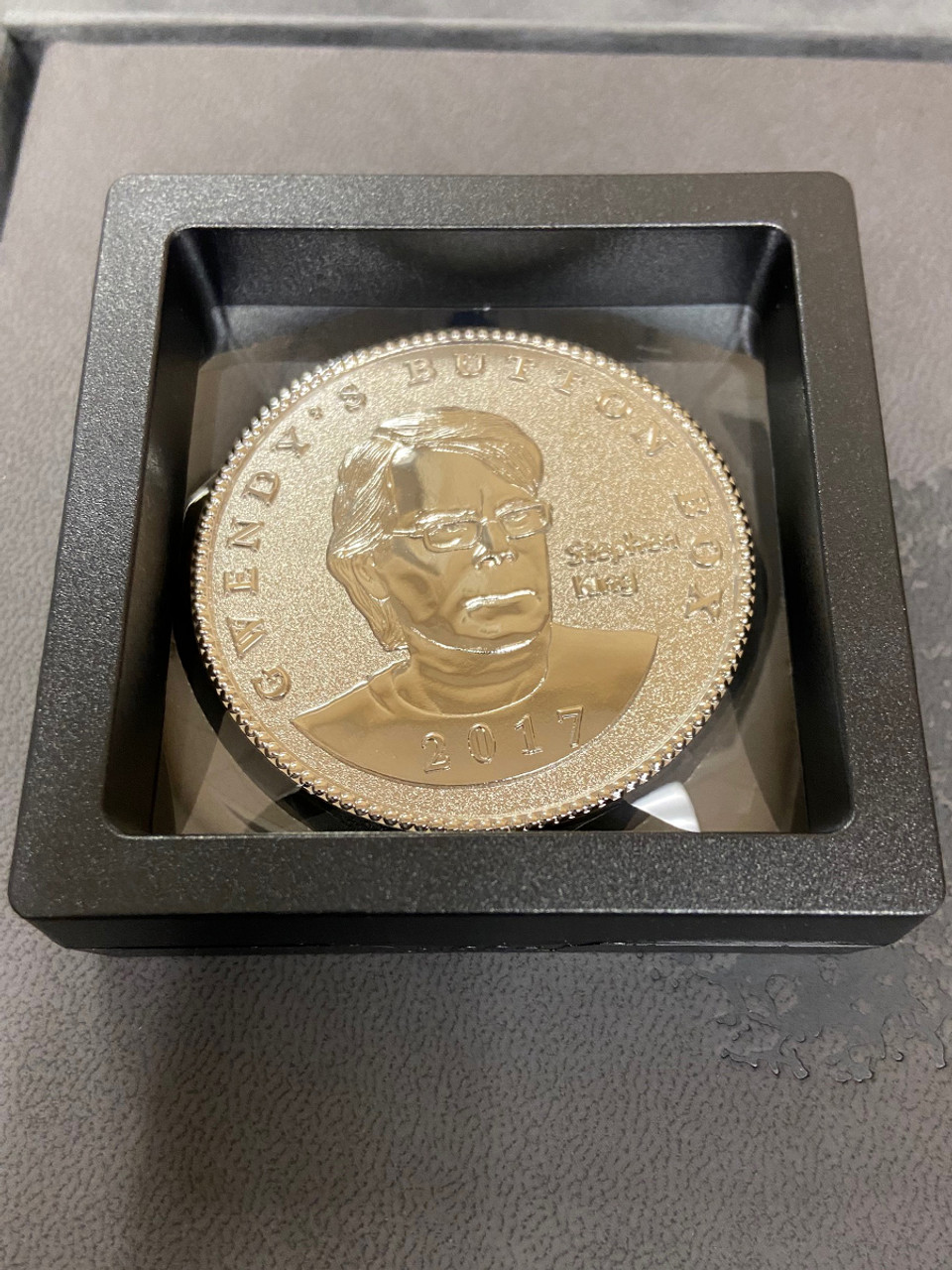 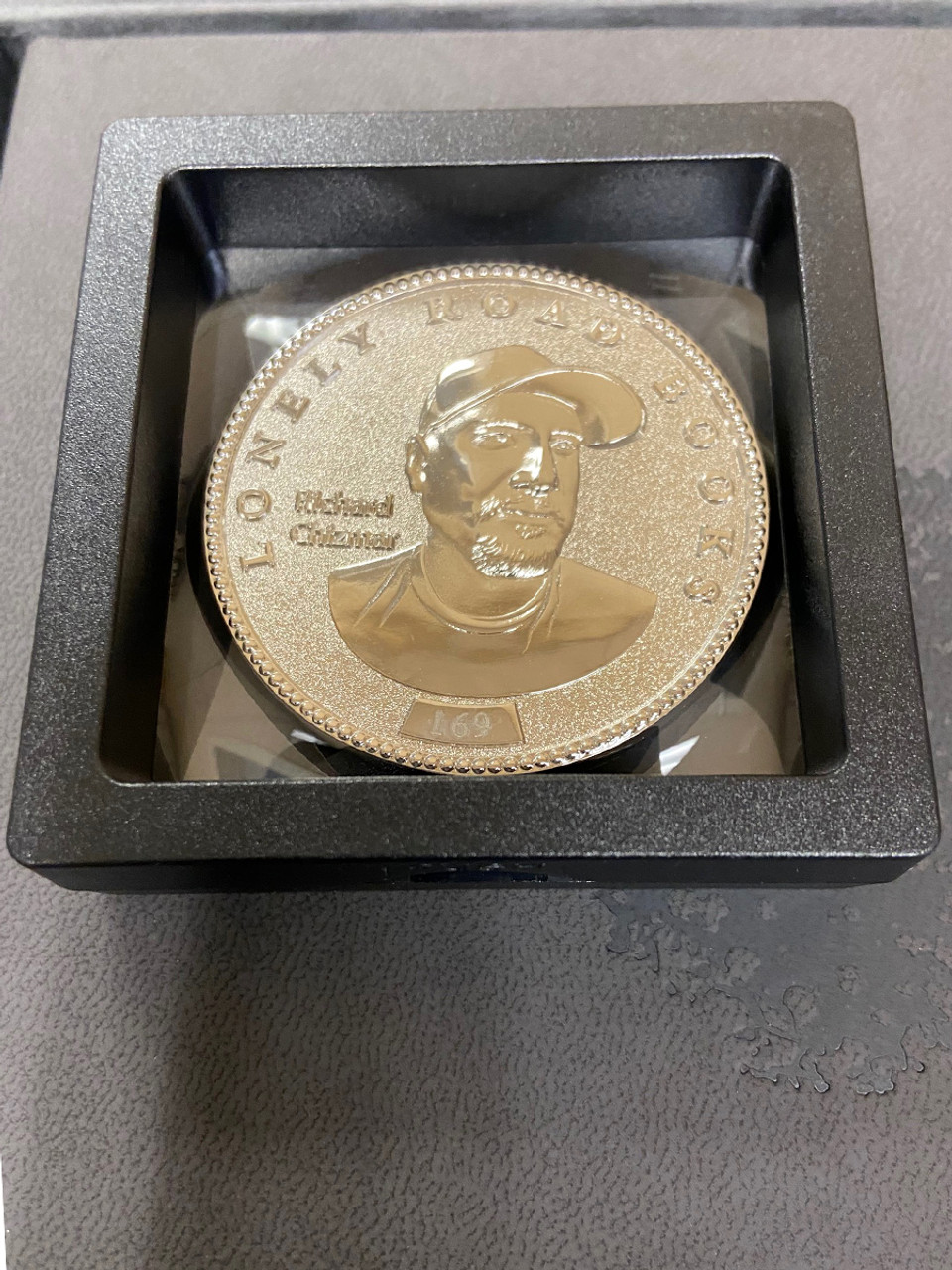 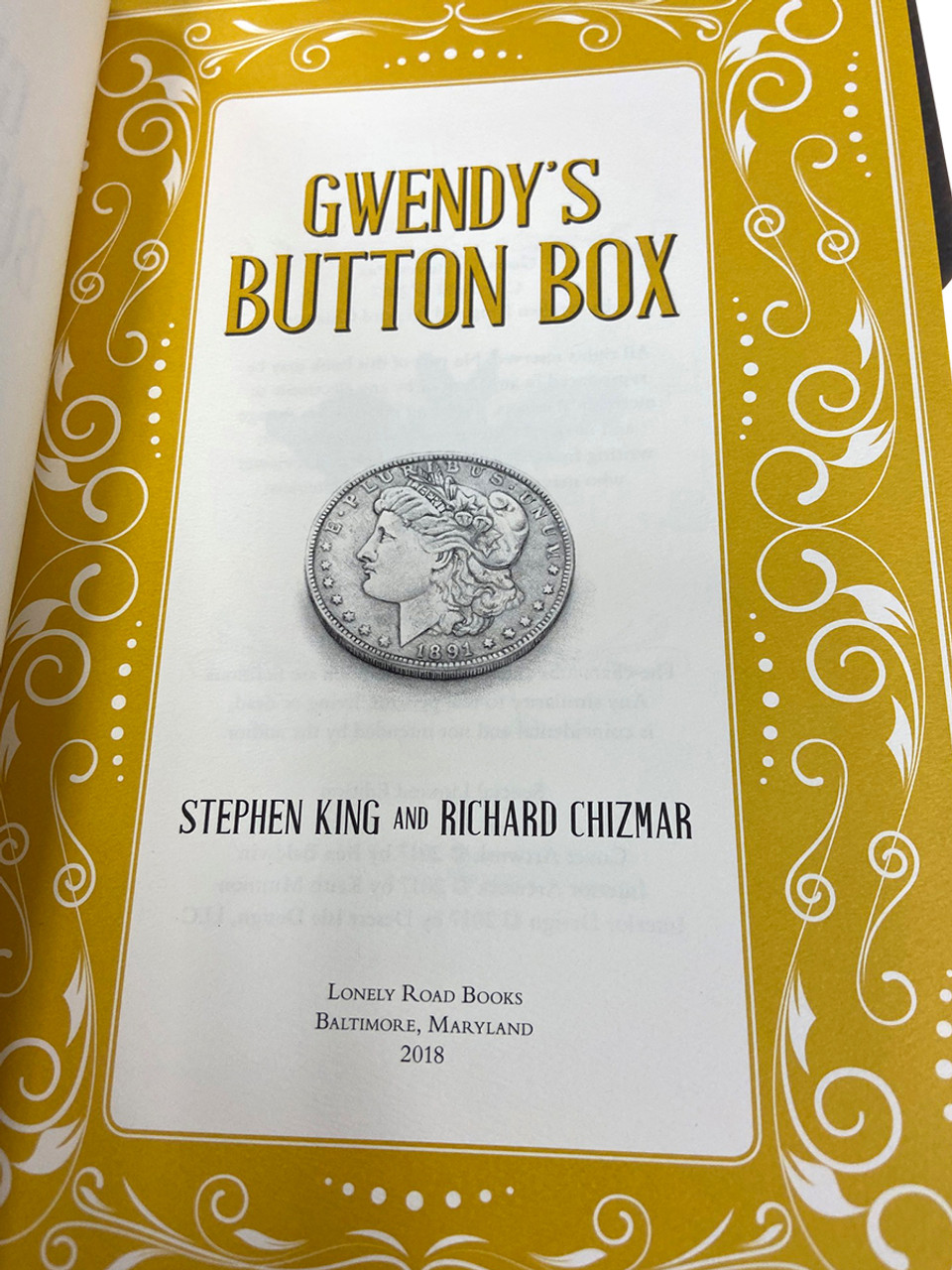 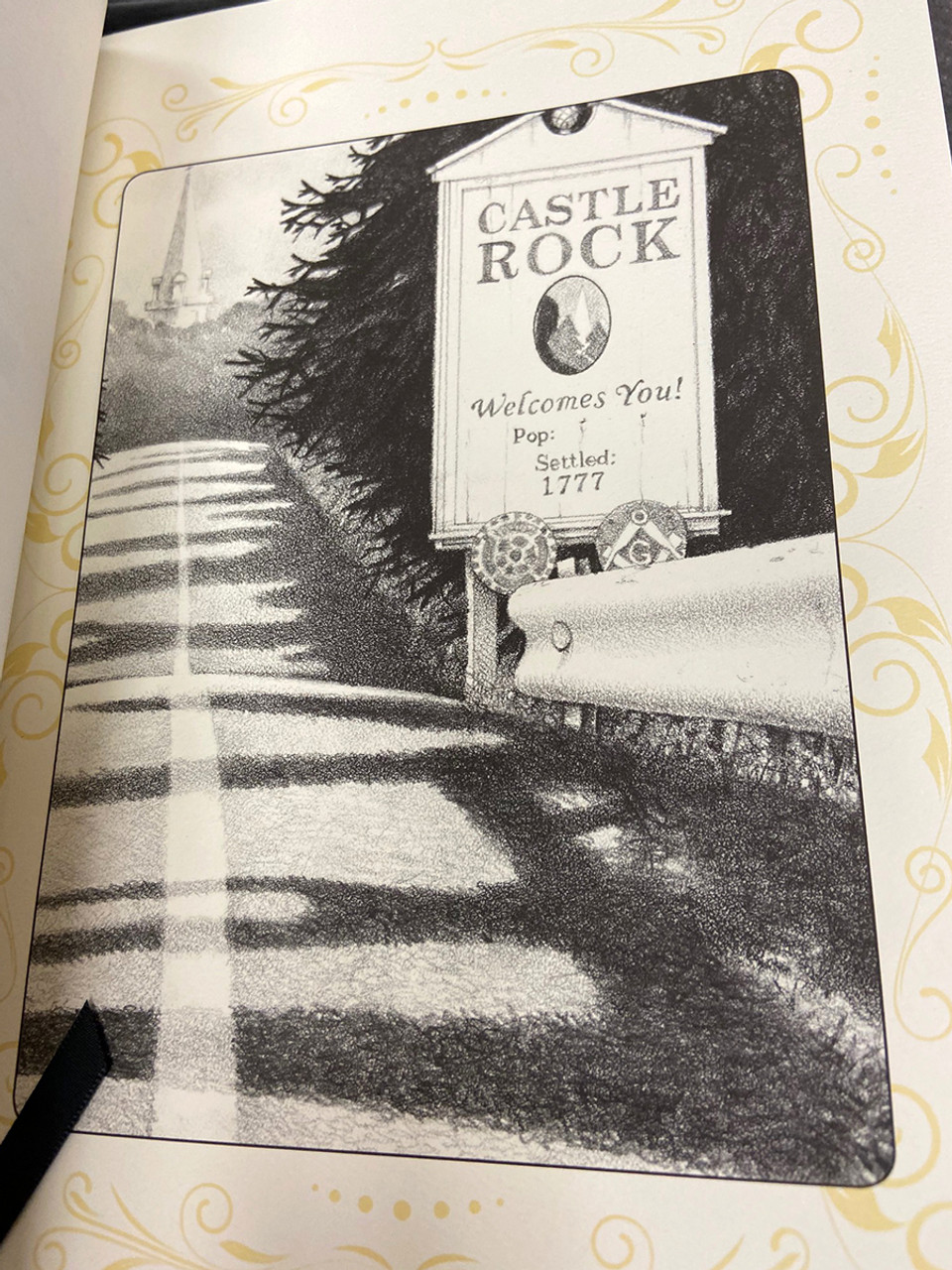 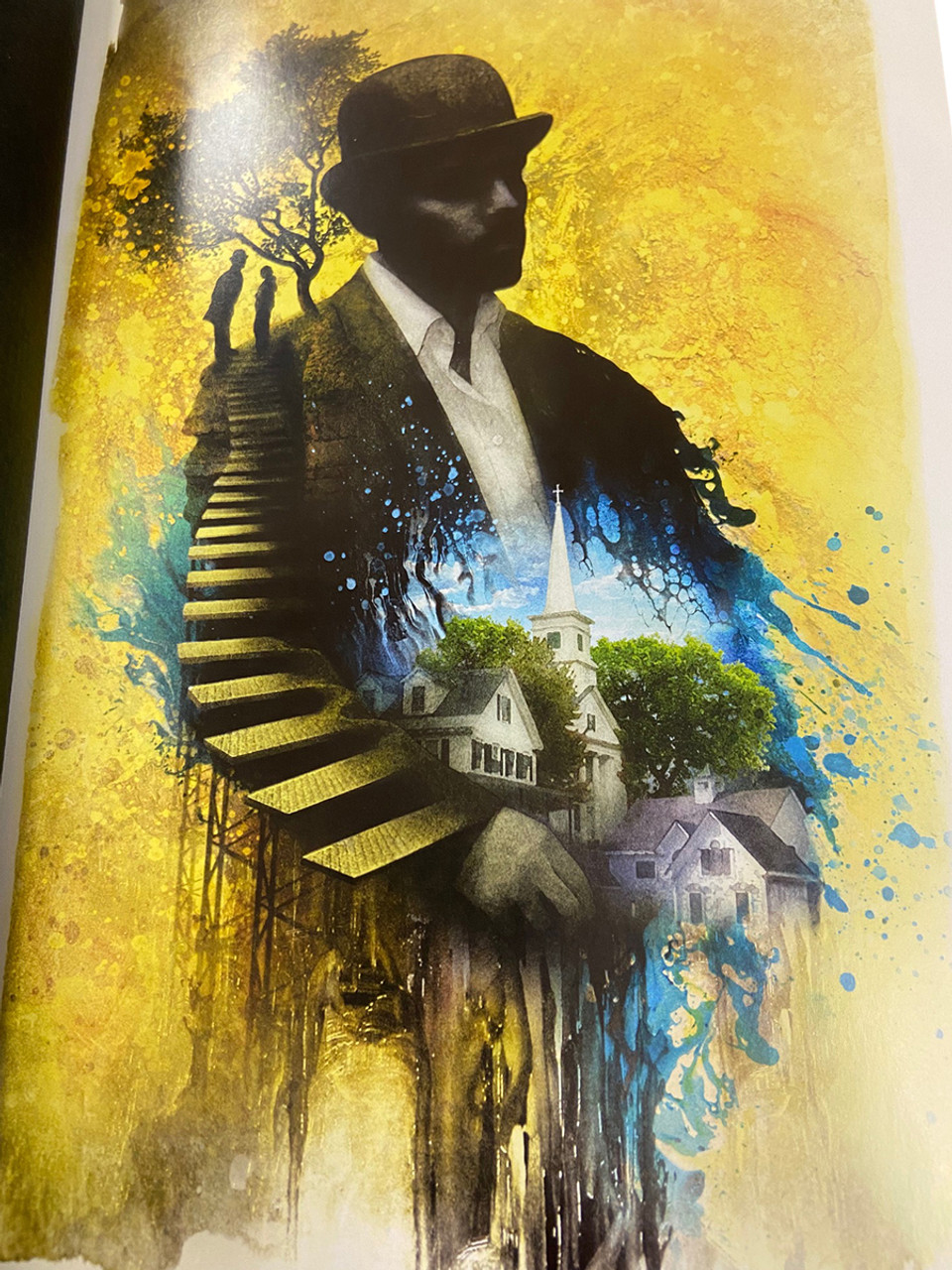 Gwendy's Button Box is a horror novella by American writers Stephen King and Richard Chizmar. It was announced by Entertainment Weekly on February 28, 2017. The American edition published by Cemetery Dance included illustrations by Keith Minnion. The French edition released by Le Livre de Poche in September 2018, reproduced those illustrations with brand new ones by the same artist.

A sequel titled Gwendy's Magic Feather, penned solely by Chizmar, was released in November 2019. In November 2020, Chizmar announced that he and King were writing a third installment in the series titled Gwendy's Final Task, this time as a full-length novel.

Set in the fictional town of Castle Rock, Maine

Stephen King teams up with long-time friend and award-winning author Richard Chizmar for the first time in this original, chilling novella that revisits the mysterious town of Castle Rock.

There are three ways up to Castle View from the town of Castle Rock: Route 117, Pleasant Road, and the Suicide Stairs. Every day in the summer of 1974, twelve-year-old Gwendy Peterson has taken the stairs, which are held by strong—if time-rusted—iron bolts and zig-zag up the precarious cliffside.

Then one day when Gwendy gets to the top of Castle View, after catching her breath and hearing the shouts of kids on the playground below, a stranger calls to her. There on a bench in the shade sits a man in black jeans, a black coat, and a white shirt unbuttoned at the top. On his head is a small, neat black hat. The time will come when Gwendy has nightmares about that hat…

The little town of Castle Rock, Maine has witnessed some strange events and unusual visitors over the years, but there is one story that has never been told—until now.

The little town of Castle Rock, Maine has witnessed some strange events and unusual visitors over the years, but there is one story that has never been told... until now.

There are three ways up to Castle View from the town of Castle Rock: Route 117, Pleasant Road, and the Suicide Stairs. Every day in the summer of 1974 twelve-year-old Gwendy Peterson has taken the stairs, which are held by strong (if time-rusted) iron bolts and zig-zag up the cliffside.

At the top of the stairs, Gwendy catches her breath and listens to the shouts of the kids on the playground. From a bit farther away comes the chink of an aluminum bat hitting a baseball as the Senior League kids practice for the Labor Day charity game.

One day, a stranger calls to Gwendy: "Hey, girl. Come on over here for a bit. We ought to palaver, you and me."

On a bench in the shade sits a man in black jeans, a black coat like for a suit, and a white shirt unbuttoned at the top. On his head is a small neat black hat. The time will come when Gwendy has nightmares about that hat...

Journey back to Castle Rock again in this chilling new novella by Stephen King, bestselling author of The Bazaar of Bad Dreams, and Richard Chizmar, award-winning author of A Long

"Man, I love this story! The whole thing just races and feels so right-sized and so scarily and sadly relevant. Loved the characters... and the sense of one little girl's connection to the whole world through this weird device. It all just sang."
— JJ Abrams

"This absorbing novella by horror giants King (End of Watch) and Chizmar (A Long December) revisits one of King's most popular locales. It's 1974 when 12-year-old Gwendy Peterson is offered a magic box by a man named Richard Farris, whom she meets at the top of one of the cliffside Suicide Stairs in Castle Rock, Maine. Farris wears a "small neat black hat" and seems to know just who Gwendy is and what she wants. Eight buttons grace the mahogany box he offers to Gwendy, and a lever dispenses silver dollars and intricate chocolates that Farris claims will help Gwendy lose weight and escape being called "Goodyear" by her classmates. Lose weight she does, but that's not all. Wonderful things keep happening in Gwendy's life, and she's happier than she's ever been. But when she decides to press one of the buttons, the consequences are horrendous. The novella follows Gwendy through high school and beyond, capturing the golden-hued joy of childhood and the wonder of friendship and first love, all under the shadow of temptation. This bite-size gem of a story packs quite a punch, and the only complaint readers will likely have is that it isn't longer."
— Publishers Weekly

"Starred ReviewCastle Rock, Maine, is known for the strange things that always seem to happen there. It has been a while since King let his imagination wander back to this beloved location, but with the help of award-winning author Chizmar, Castle Rock reveals one of its best secrets yet. Readers meet Gwendy in the summer of 1974, as she climbs the 305 Suicide Steps to the top of Castle View to find a man in a dark suit and hat waiting for her on a bench. He has something to give her, something beautiful but sinister: the button box. It dispenses valuable coins and amazing chocolate treats, but it can also be used to cause worldwide devastation—and Gwendy is charged with keeping the box safe for the foreseeable future. This coming-of-age novella is told in a tone that is both sweet and ominous. As she grows from a plump 12-year-old to a college graduate, Gwendy’s time as the steward of the box is filled with its share of utter happiness and crushing sorrow. Where the story shines is in the universal questions it asks: how much of any of our lives is our own doing versus a result of intervention from an unseen force? And how much power do any of us have to save the world—or destroy it? Readers will eagerly devour this thought-provoking, satisfying tale, even as it leaves them unsettled."
— Booklist

VERY FINE GUARANTEED . As New without any flaws. . A wonderful bring clean copy without any other marks, writings , or stamps. Clean & straight boards. No attached bookplates or indication of any removed. A well-cared for book, protected from any potential damage. Unread with square and tight spine.

A Unique Signed Limited Edition of The Regulators, personally signed by "Richard Bachman" (aka Stephen King) As New in the plastic covering. Number is unknown. (Other photos for display/presentation...