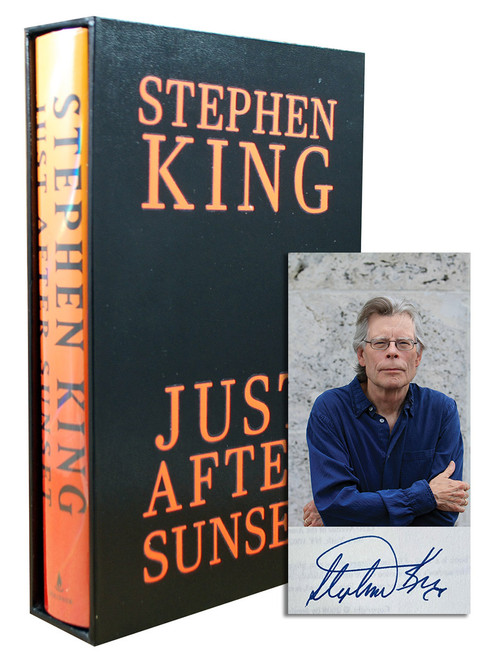 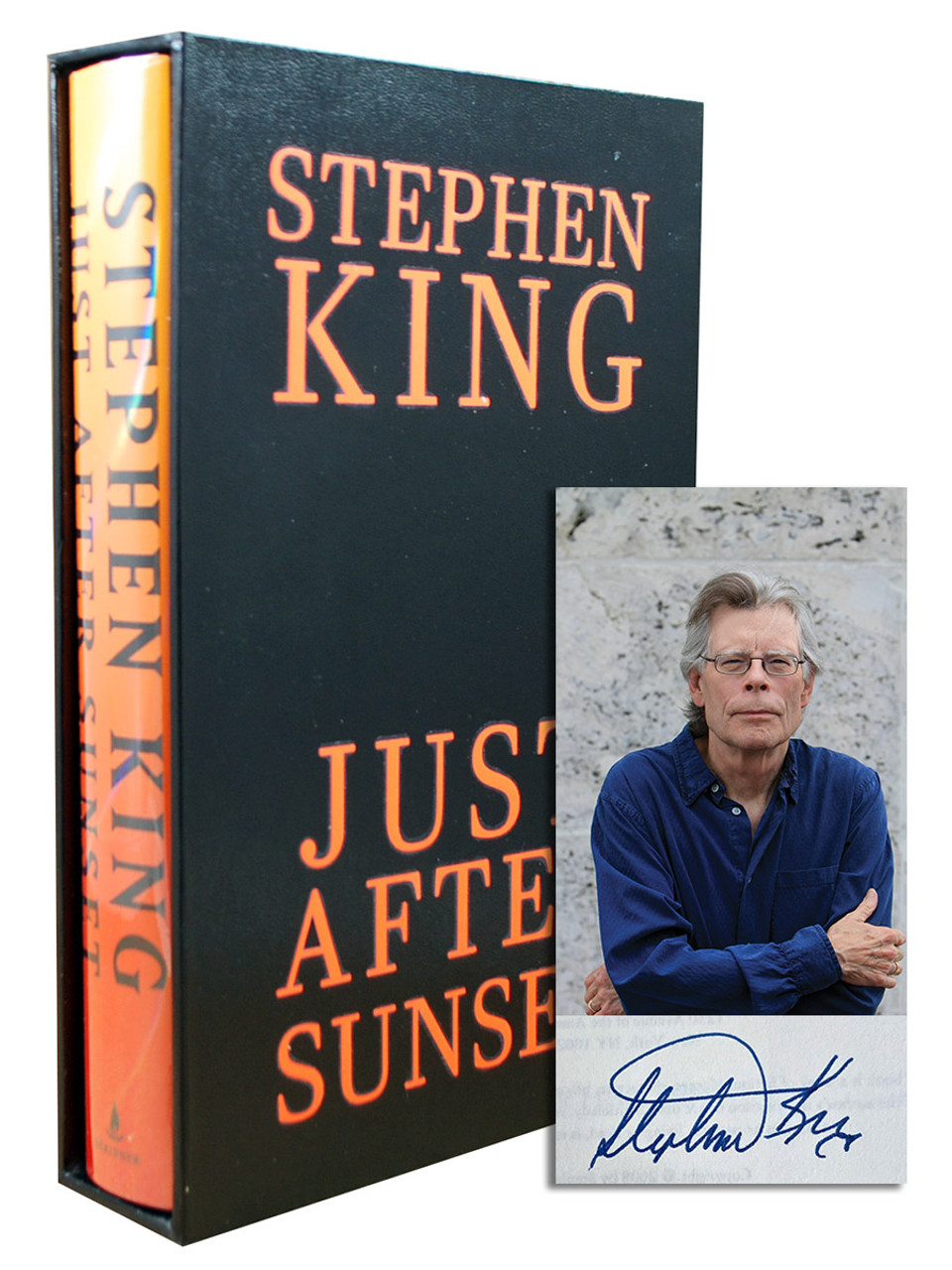 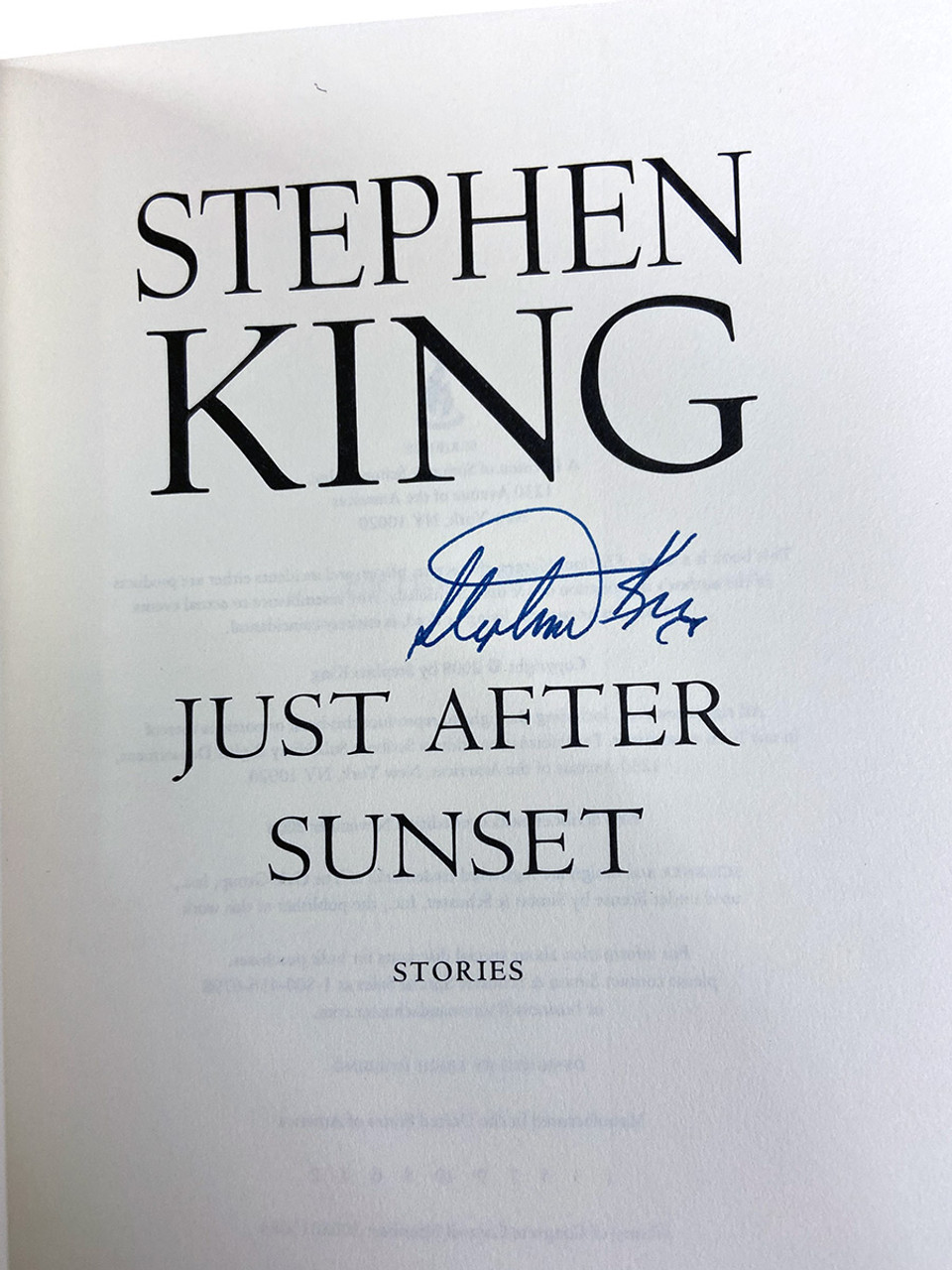 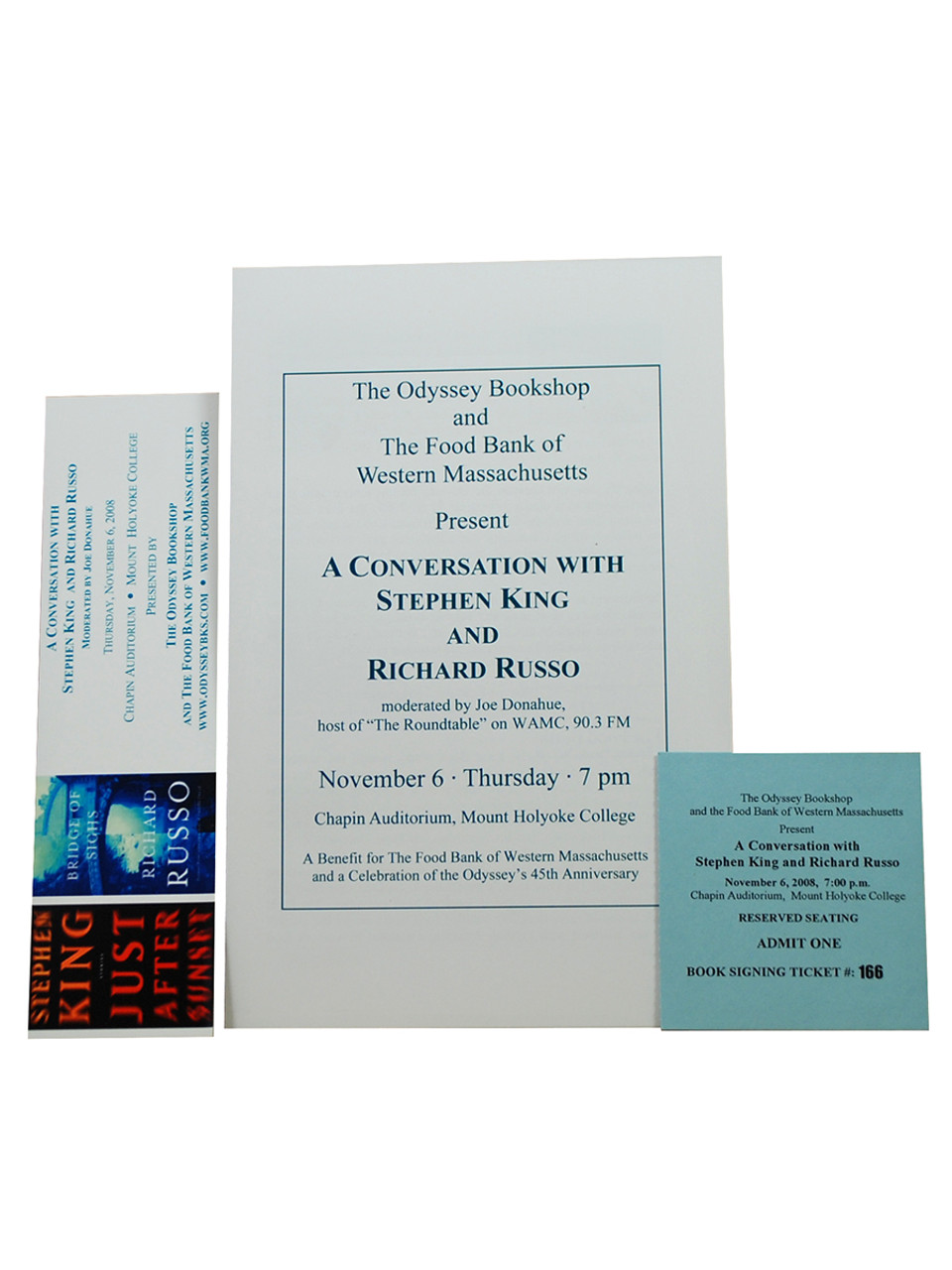 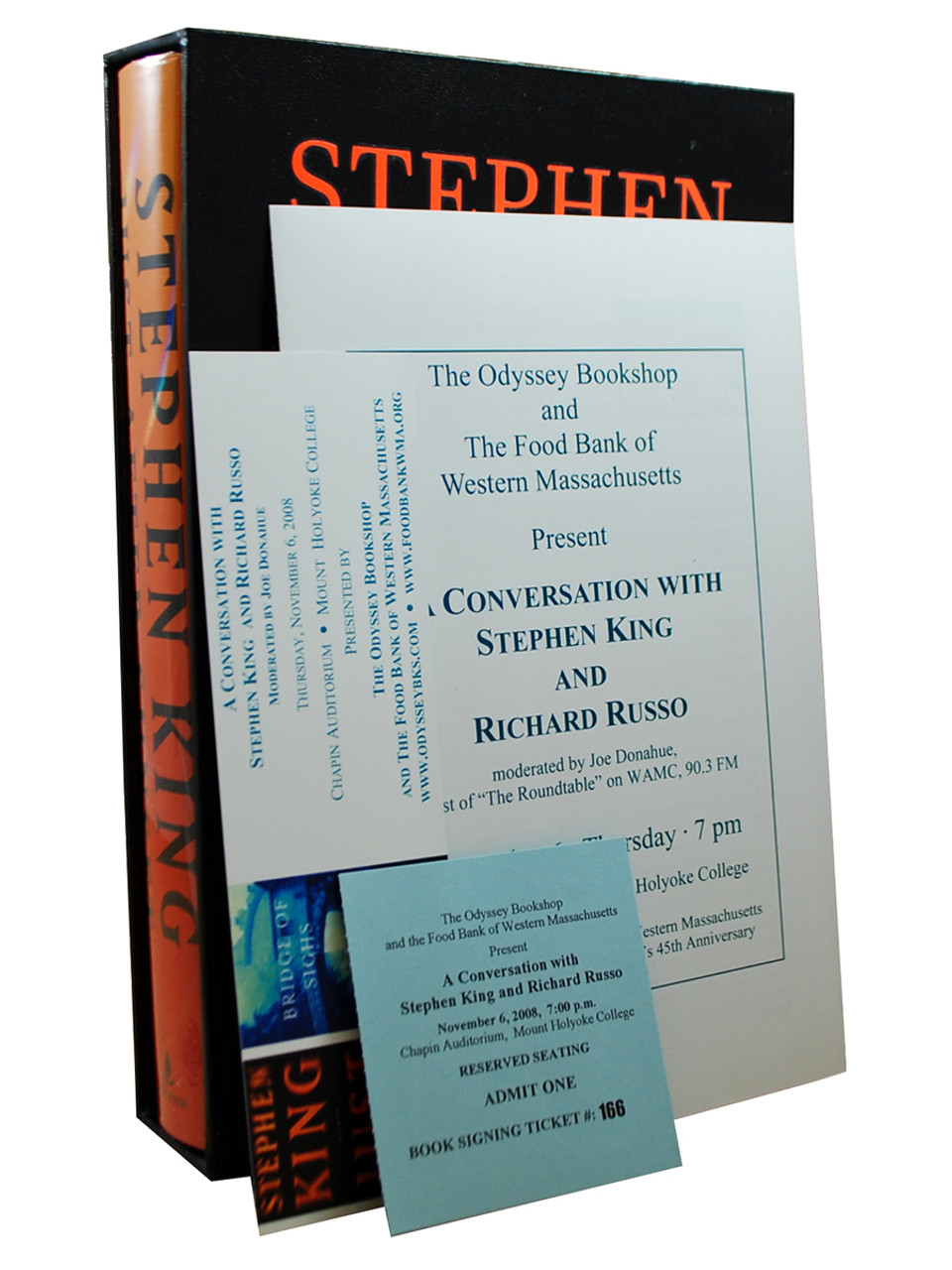 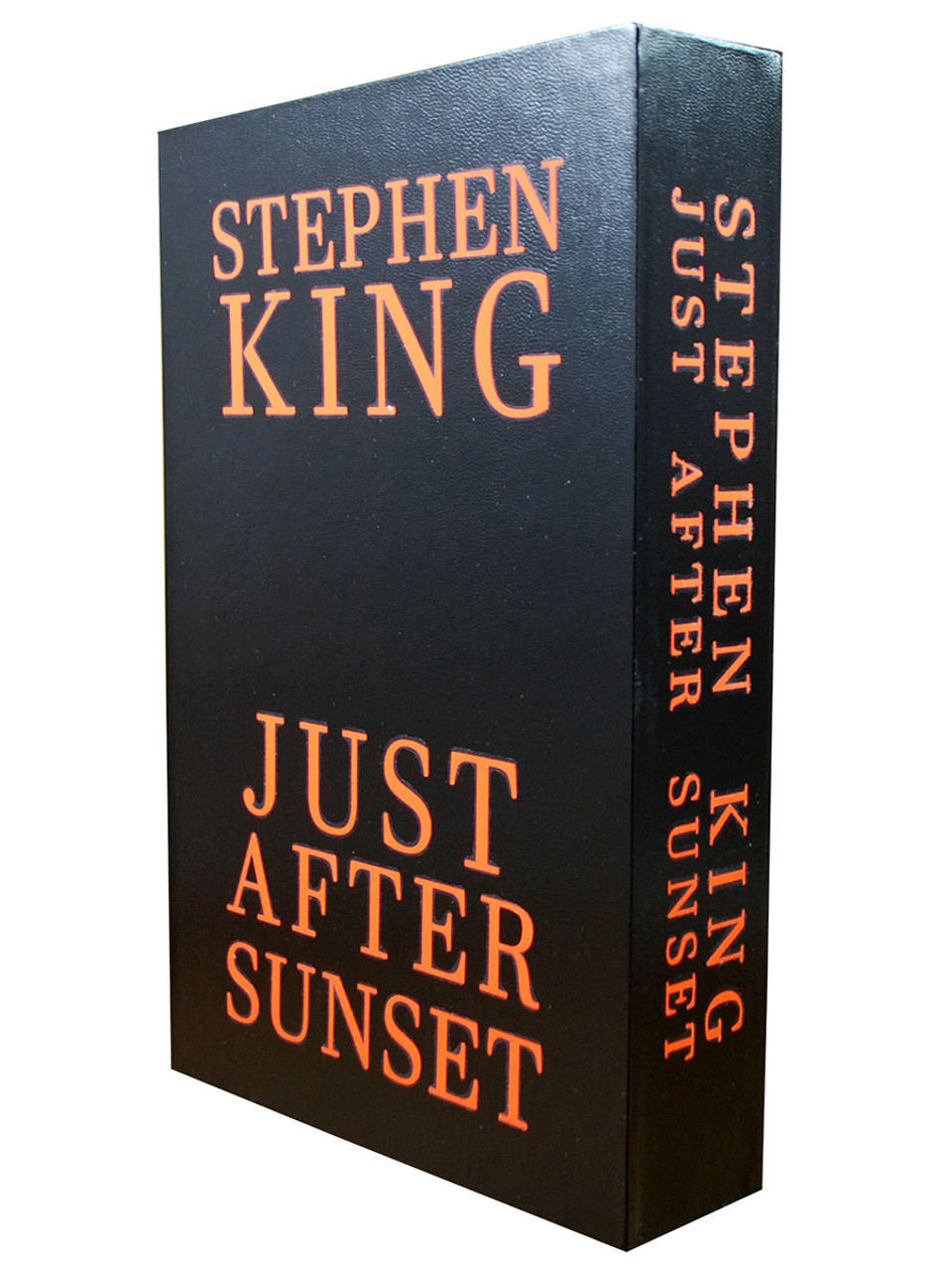 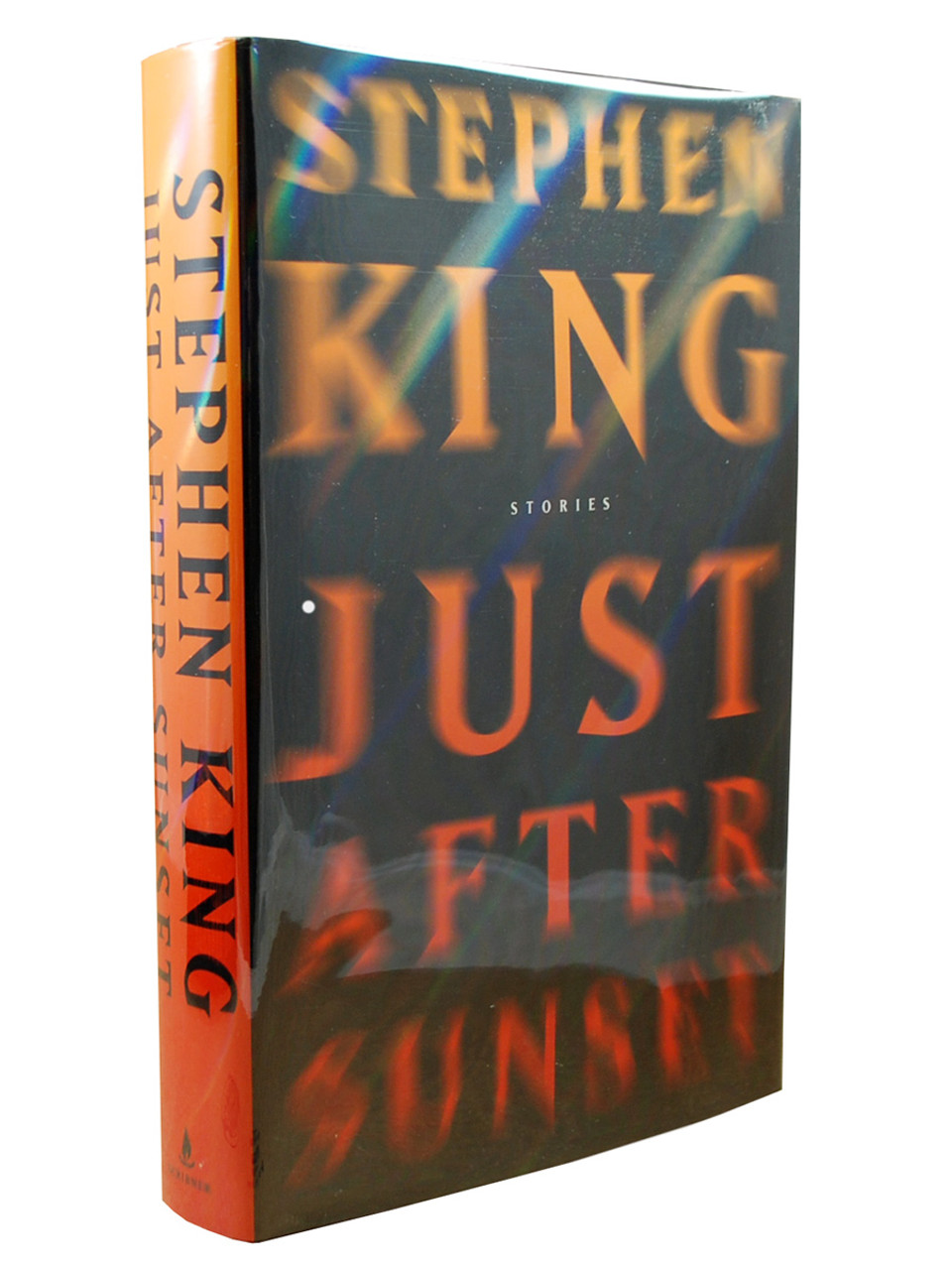 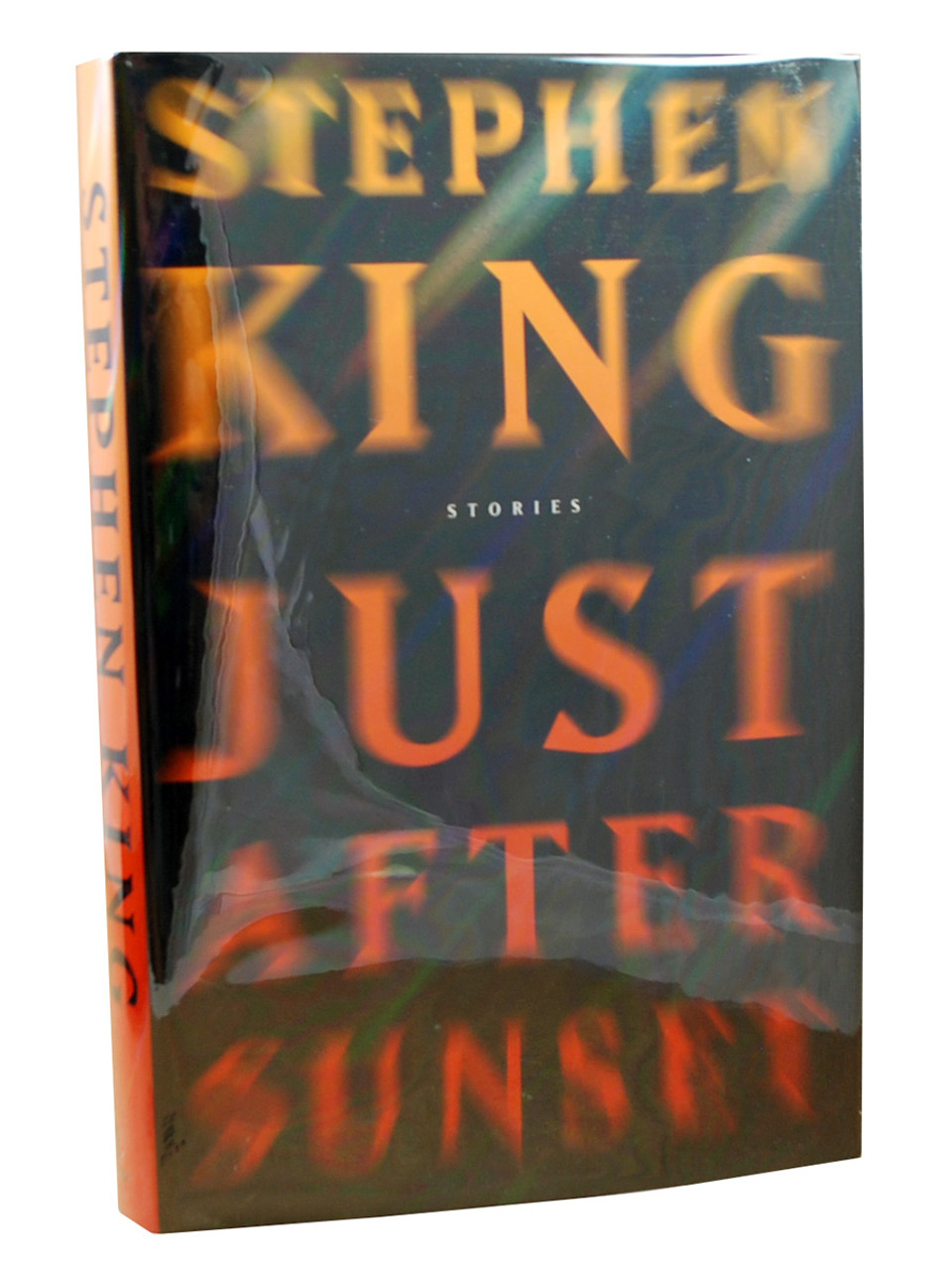 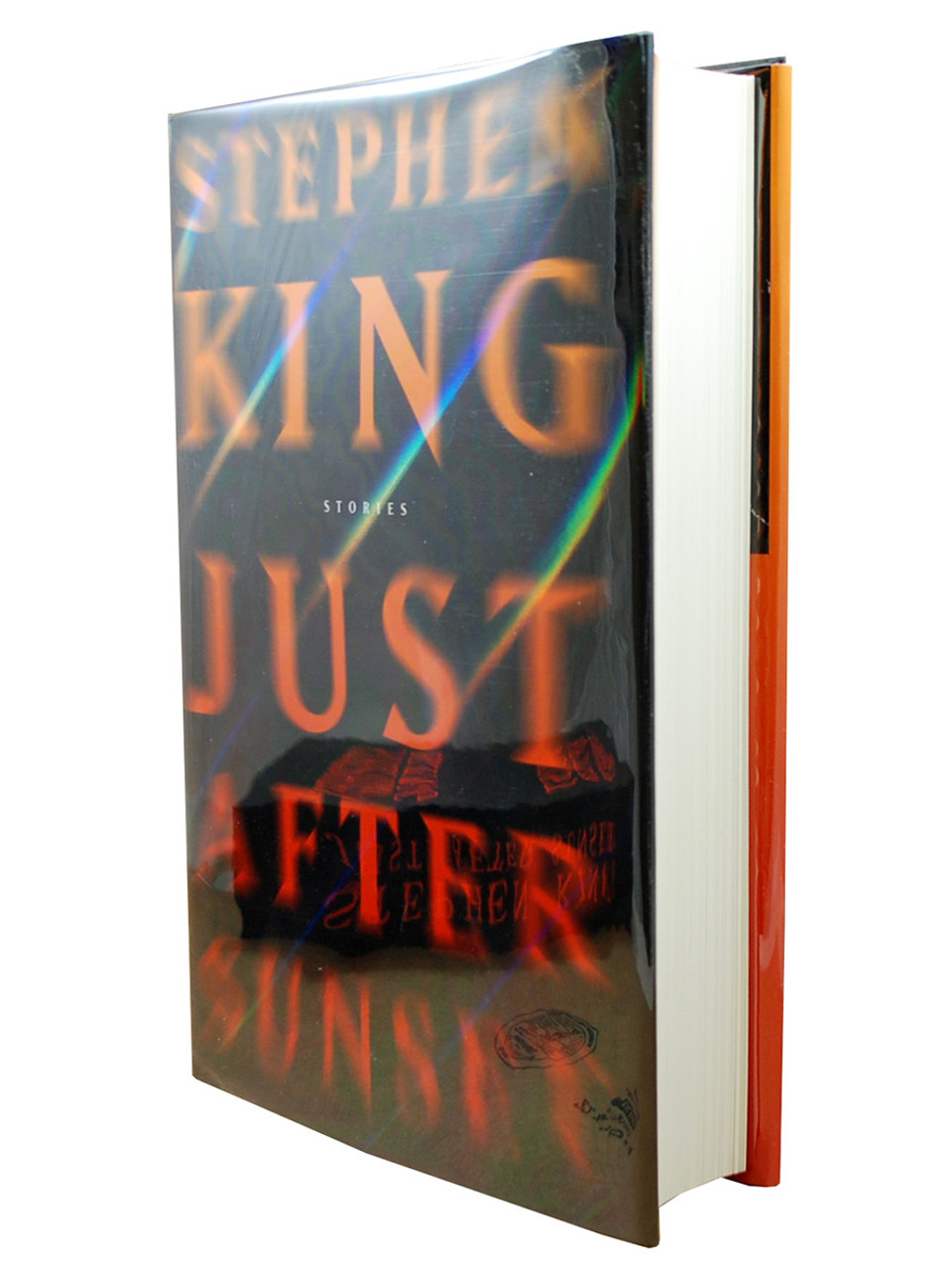 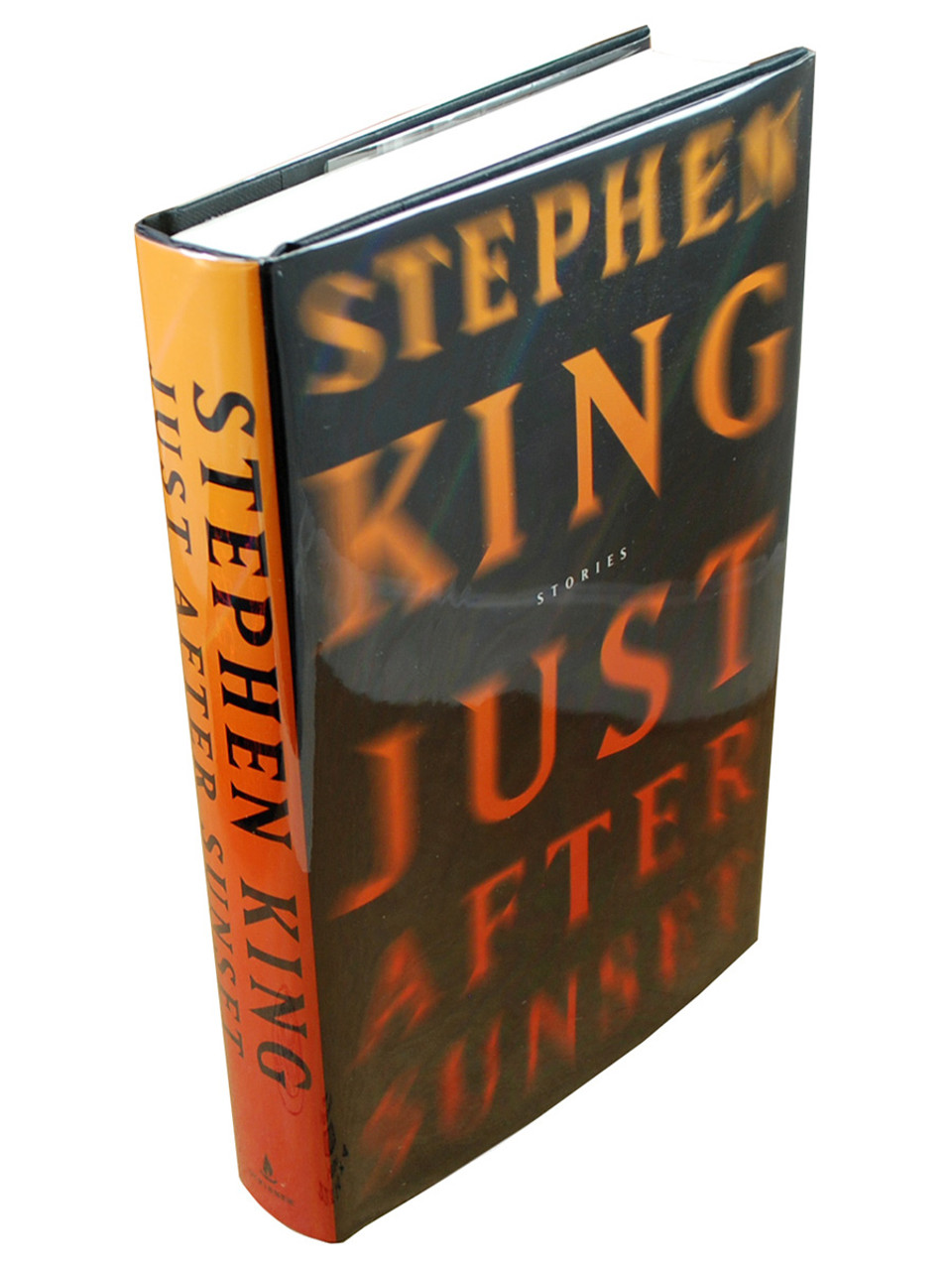 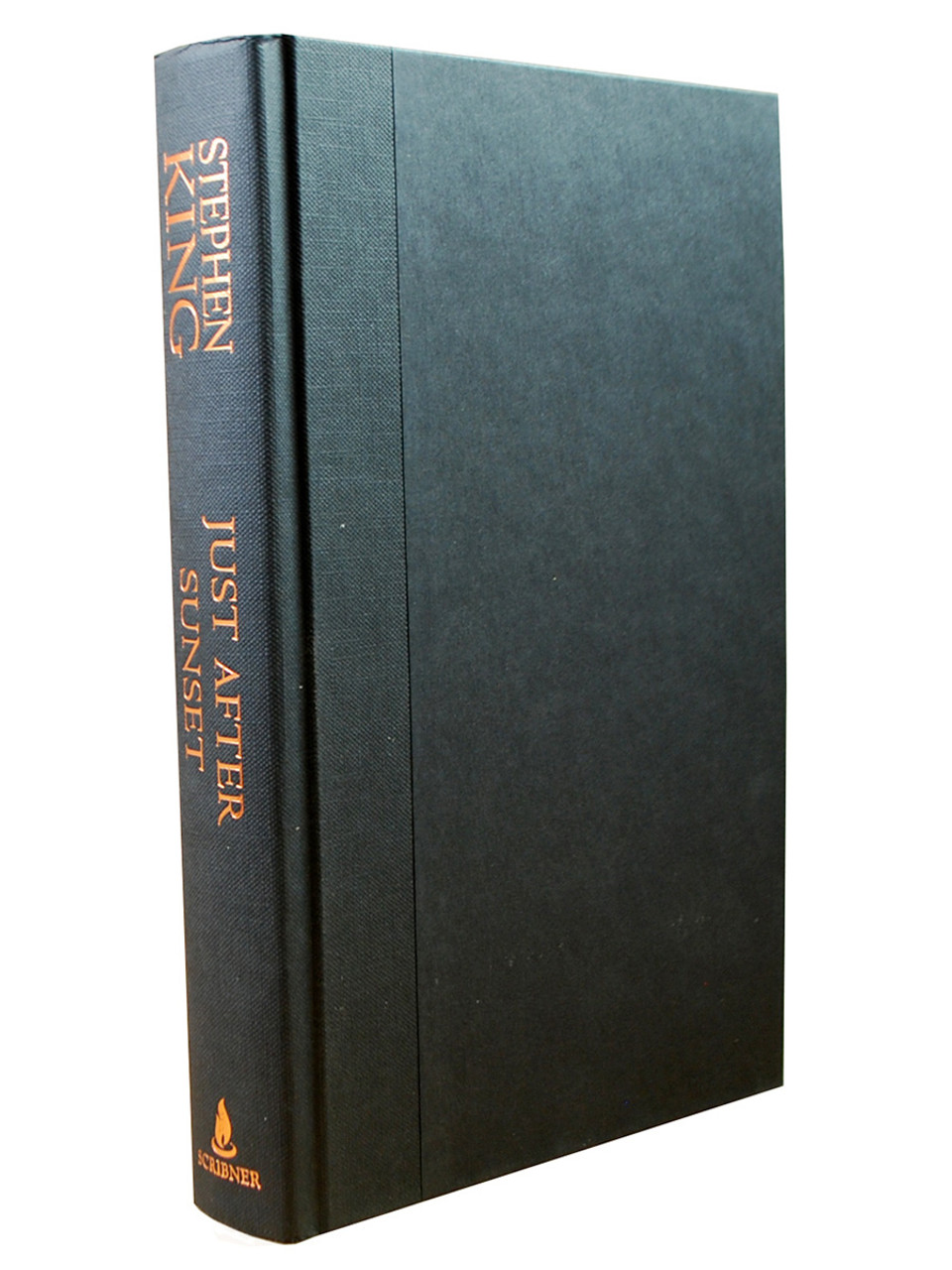 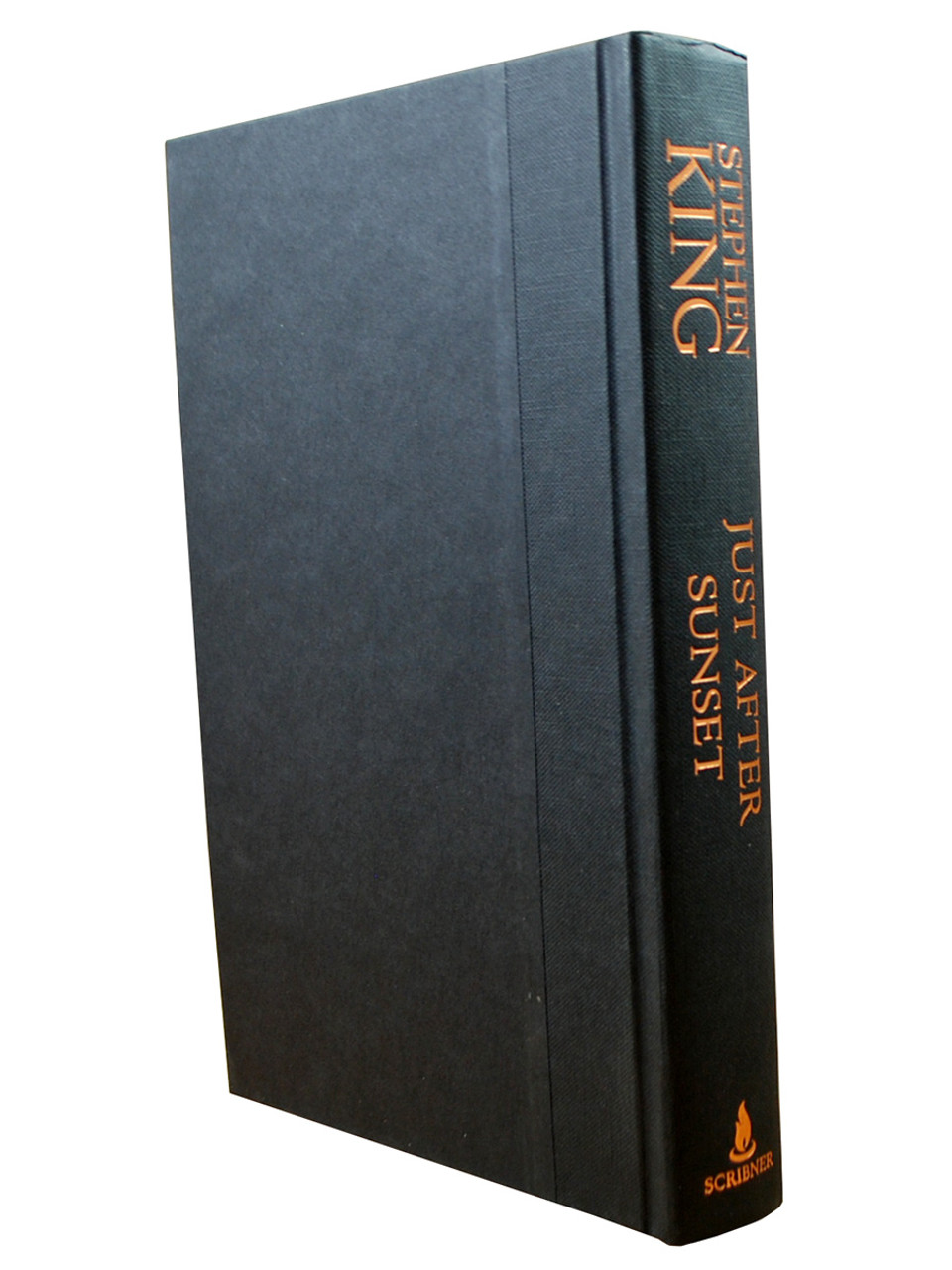 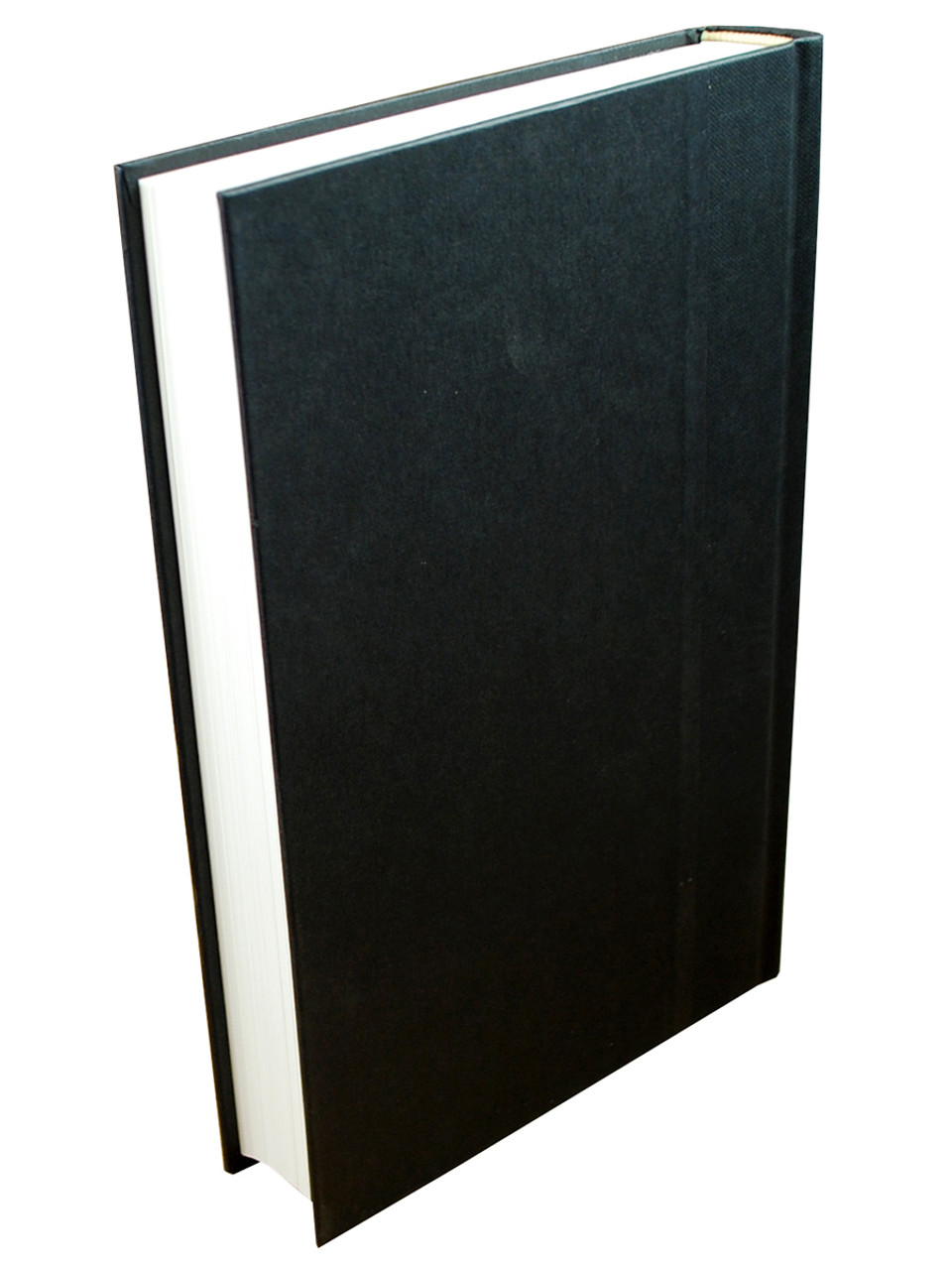 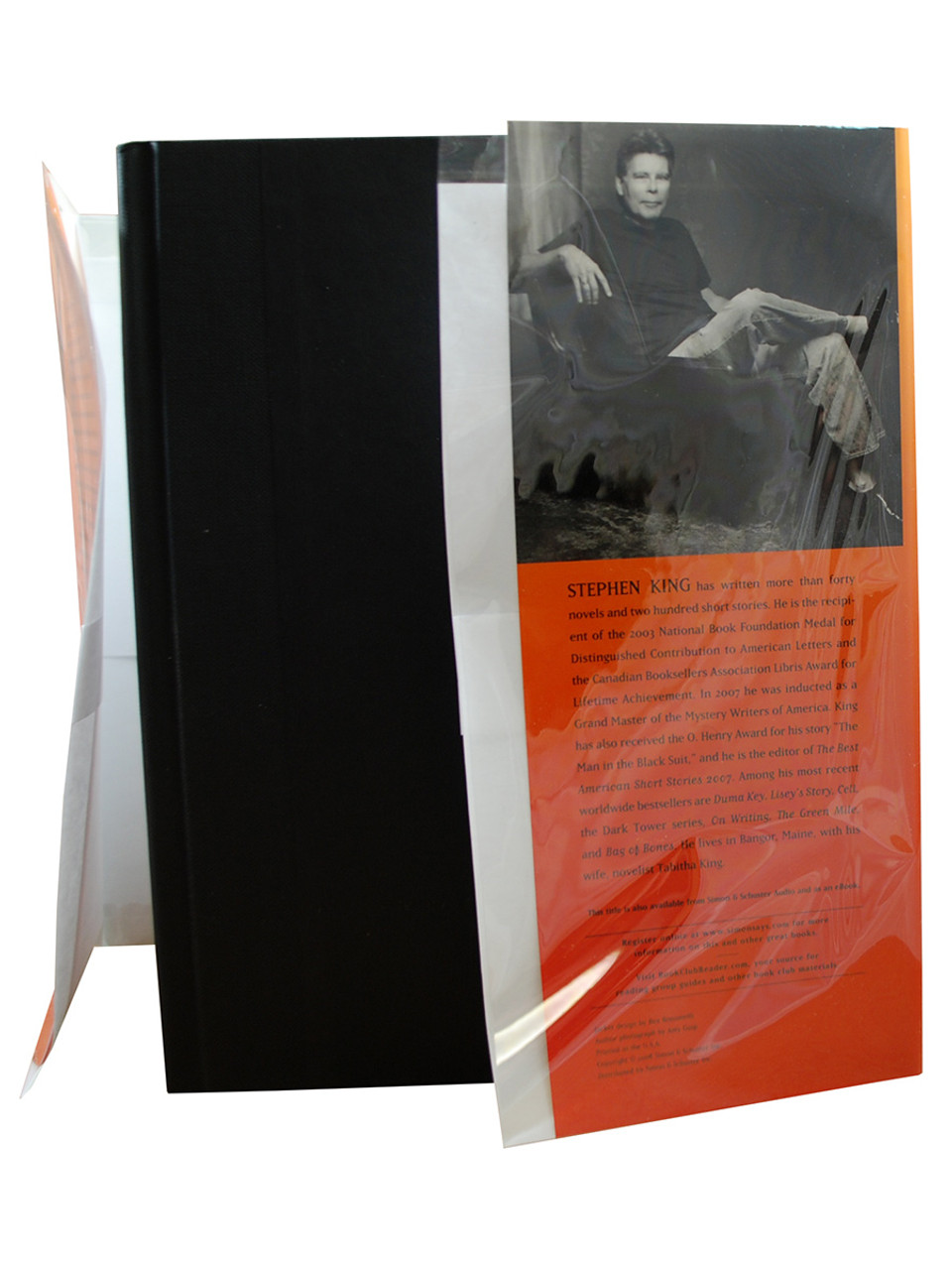 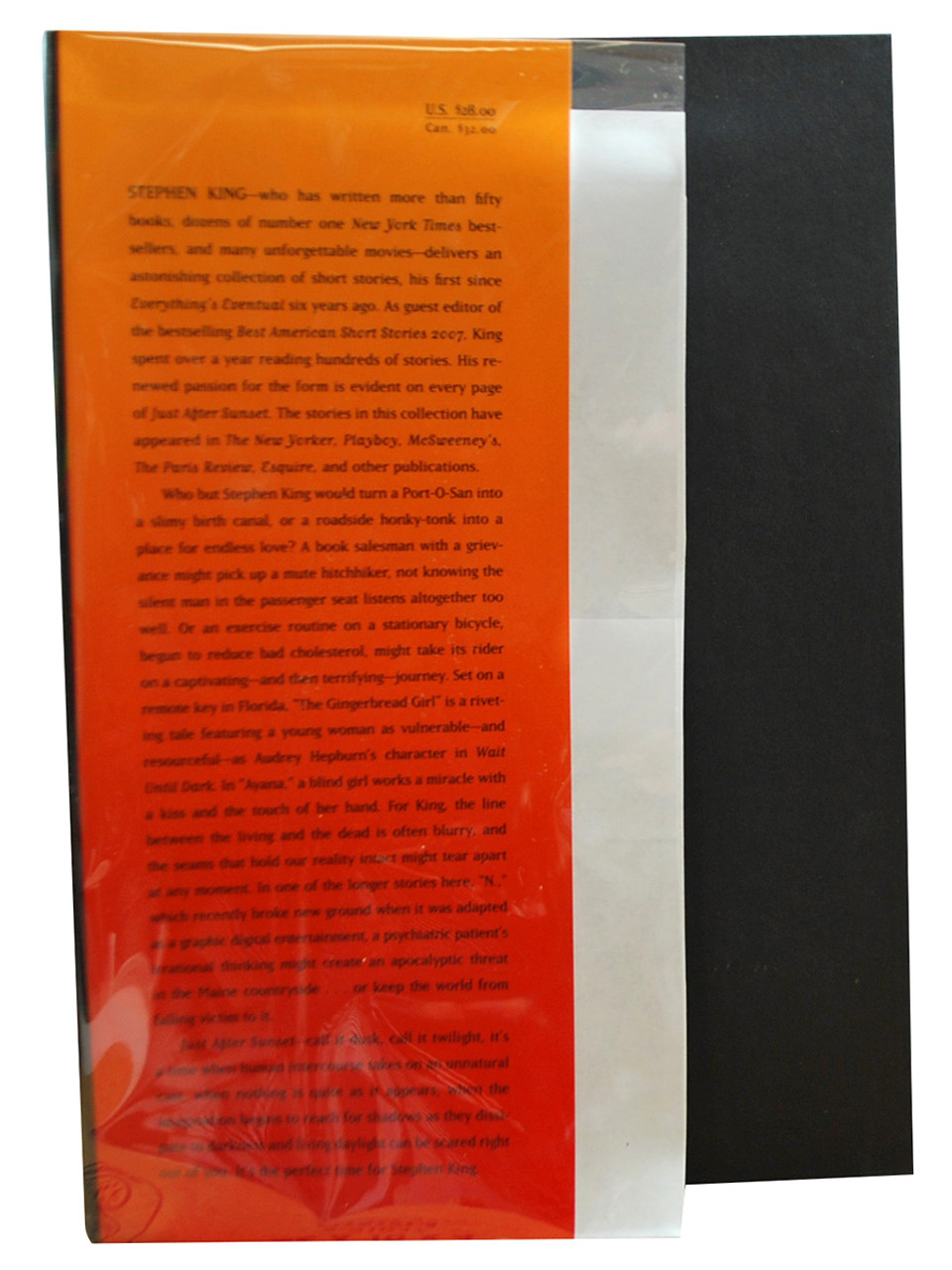 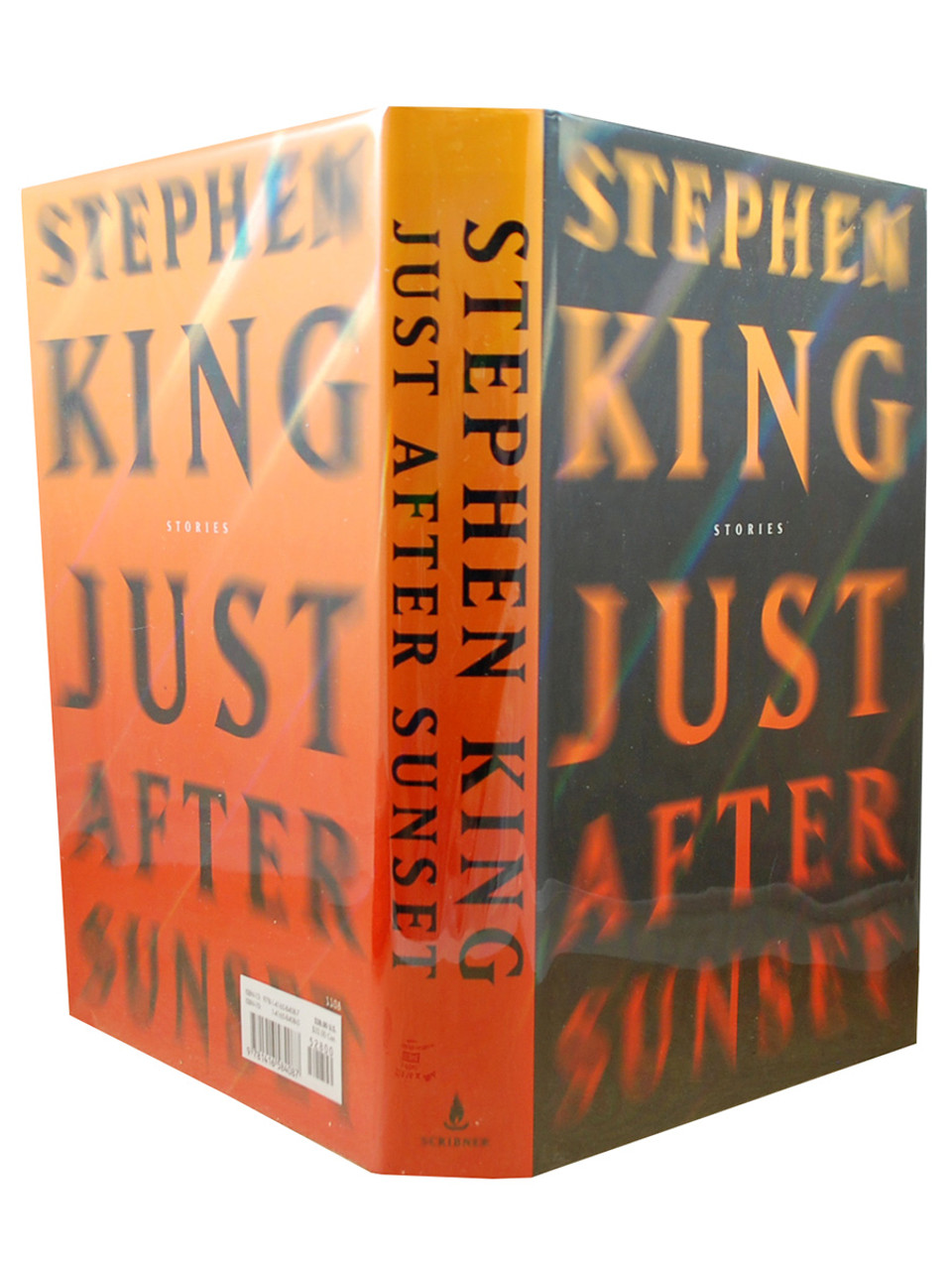 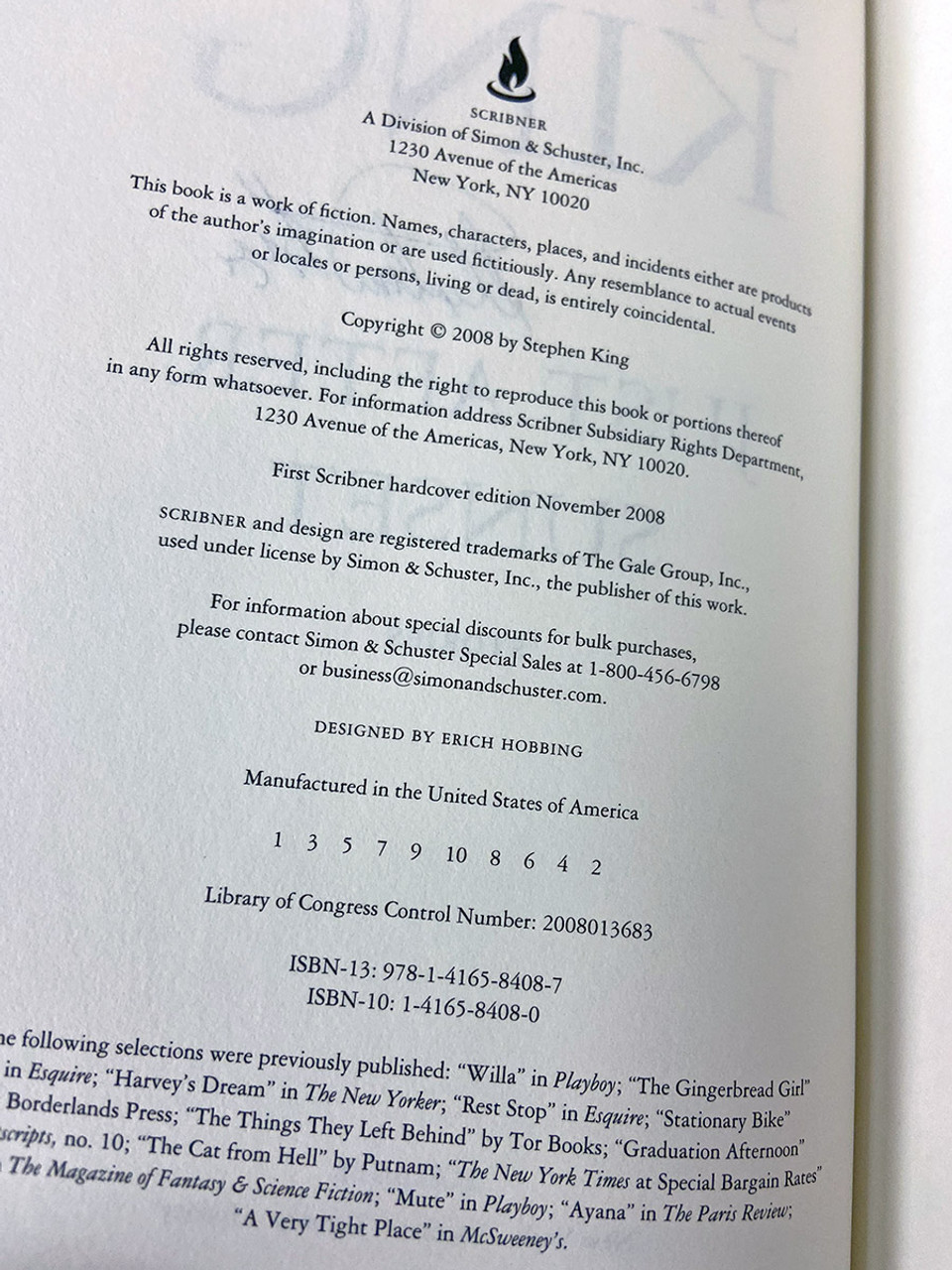 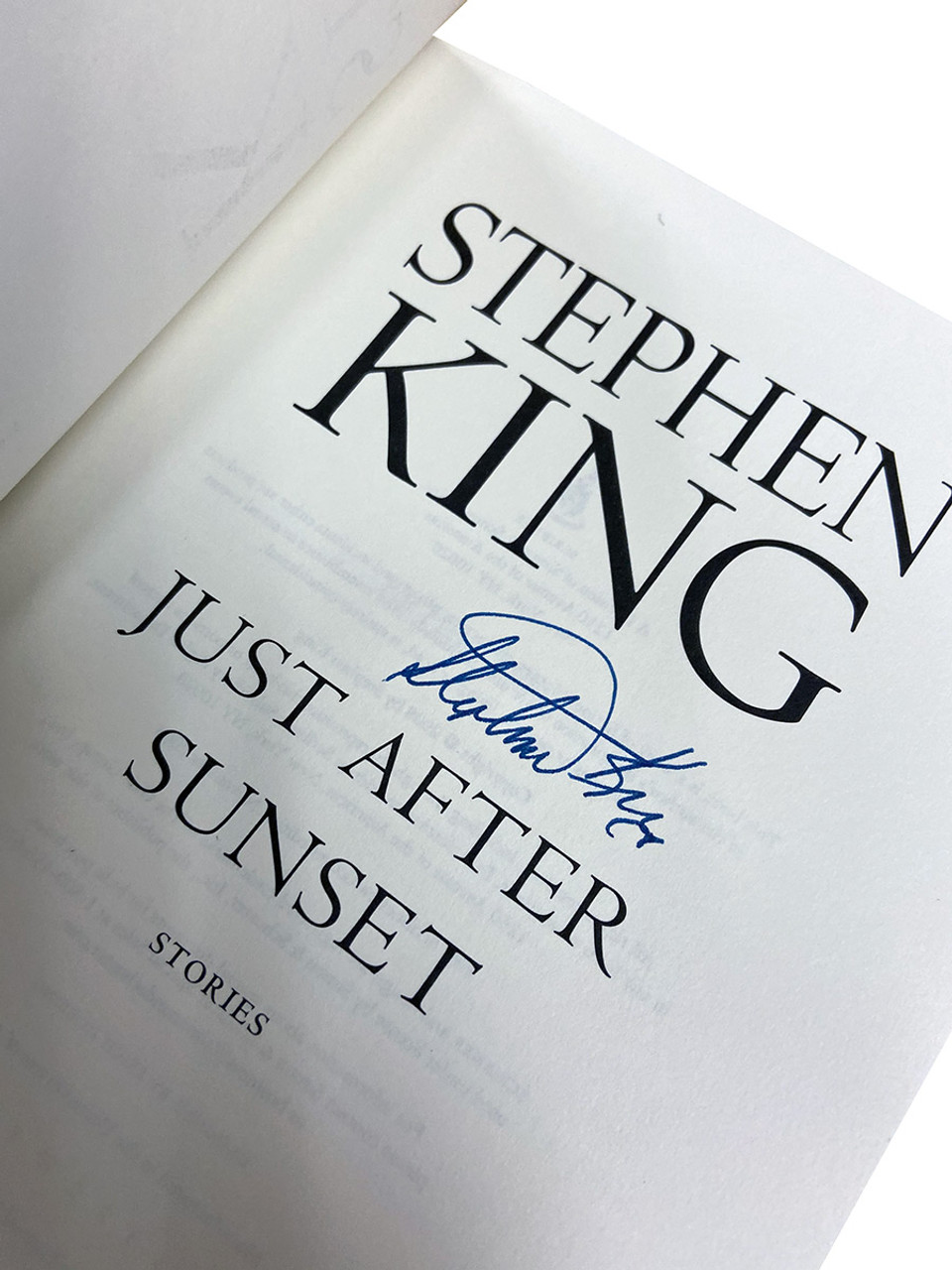 "King is as sharp and versatile as ever."-- Erica Noonan, Boston Globe

Scribner 2008. Stephen King "Just After Sunset" First Edition. First Printing. Signed by the author. Hardcover book with dust-jacket. This book was signed at the book signing event that occurred on Nov. 6, 2008 at the Odyssey Bookshop, "A Conversation with Stephen King and Richard Russo". The complete package includes book signing event ticket, flyer, and bookmark. Custom designed slipcase. The Odyssey Bookshop, founded in 1963, is the largest independent bookstore in western Massachusetts.

This first edition has been personally  signed by Stephen King direcly onto the title page. The dust jacket is protected with a new archival acid-free Mylar Brodart sleeve. Very Fine without any visible flaws. Includes COA, Certificate of Authenticity.

Just After Sunset is the fifth collection of short stories by Stephen King. It was released in hardcover by Scribner on November 11, 2008, and features a holographic dust jacket. On February 6, 2008, the author's official website revealed the title of the collection to be Just Past Sunset. About a month later, the title was subtly changed to Just After Sunset. Previous titles mentioned in the media by Stephen King himself were Pocket Rockets and Unnatural Acts of Human Intercourse.

On February 19, 2008, the author's official site revealed twelve stories that would comprise the collection, mentioning the possibility that one additional "bonus story" could be included, and on April 16 "The Cat from Hell" (a much anthologized but heretofore uncollected short story originally published in 1977) was added to the contents list.

King planned to begin writing a new novel, but after he was asked to edit The Best American Short Stories 2007, he was inspired to write short stories instead.

Upon King's request, a limited edition was released, along with the regular version, featuring a DVD collection of the 25 episodes of the online animated series based on N., one of the stories collected in this volume.

"King continues to be dedicated to giving his readers a luxuriant experience, the basic pleasure of getting lost in a book."-- Charles Taylor, New York Times Book Review

"King lets the reader put the book down at night after one story, knowing another horrific treat awaits the next day."-- Amanda St. Amand, St. Louis Post Dispatch

"King is as sharp and disgusting as ever... Haunting."-- People magazine

"King reminds us again of his power to unhinge with a single line or image. A master of the storytelling craft, he gets his ghastly fingernails right beneath the skin."-- John Marks, Salon.com

"In these 13 newly collected stories, we see a master craftsman at the top of his game and clearly enjoying himself.... Each story is a treat not just for King fans but for any fan of good fiction."-- Salem Macknee, Charlotte Observer

Very Fine Guaranteed. A wonderful bright clean copy without any marks, writings, or stamps. The dust-jacket is not price clipped. It is free of stains, tears, creases, etc. Square tight spine as shown. A well-cared for book, protected from any potential damage. The binding is uniform and tight, pages clean, and with no scuffs, marks, dents, bruises, etc. This book stands out as having had exemplary care. Protected in Mylar covering. Spine lettering clear and not faded.