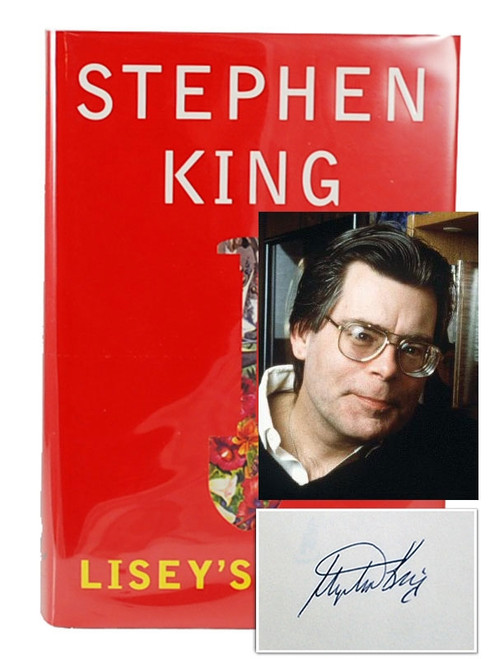 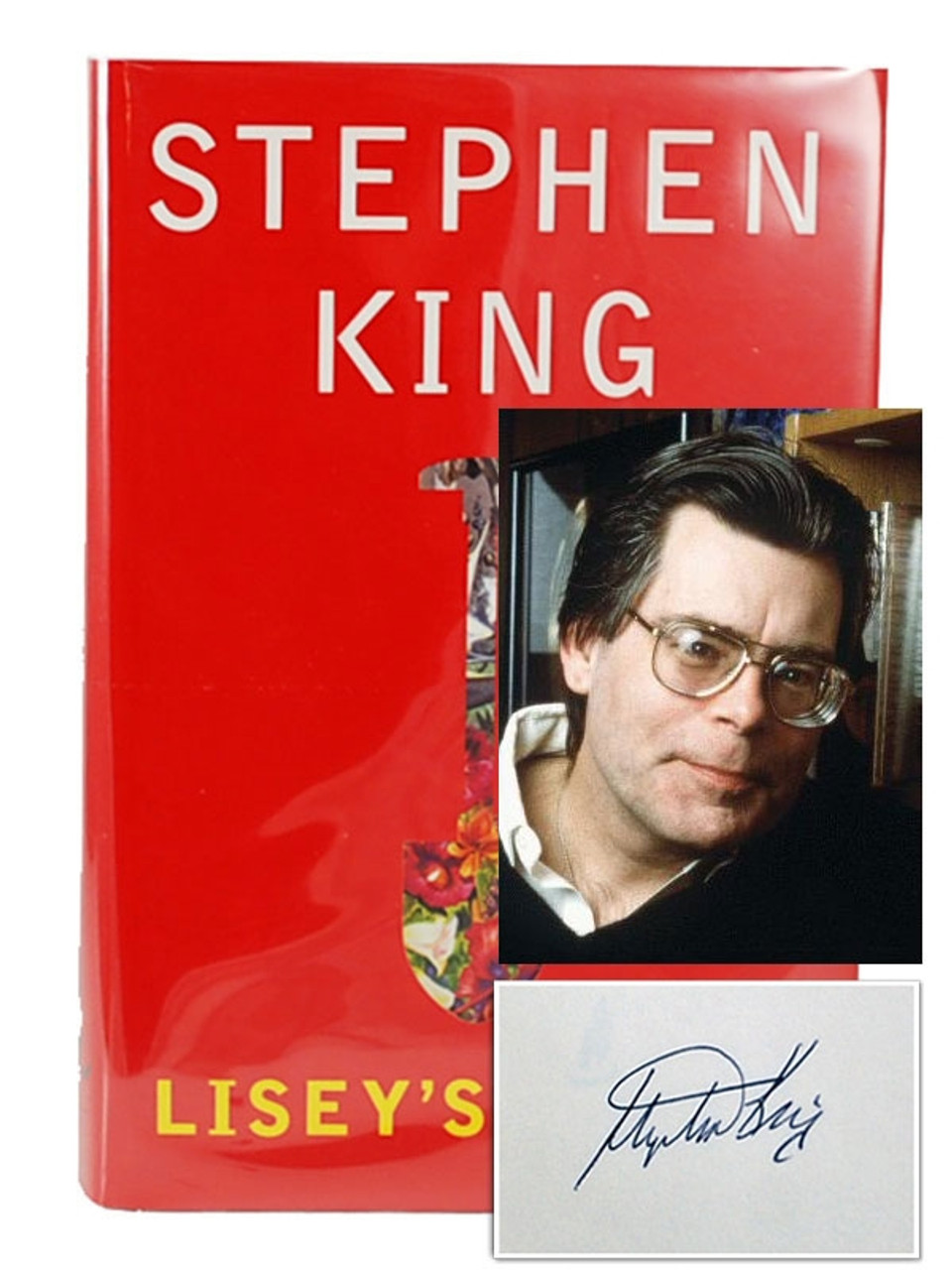 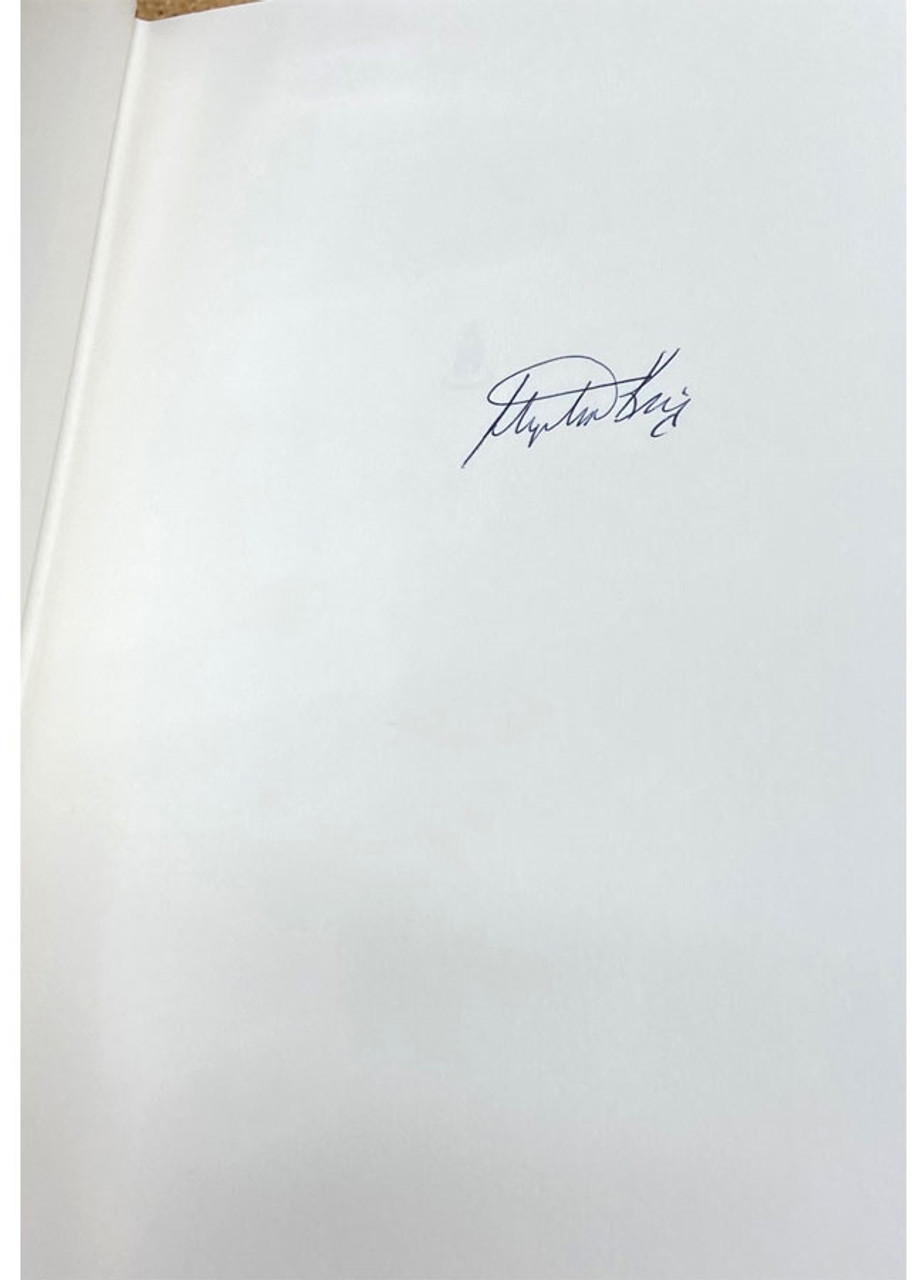 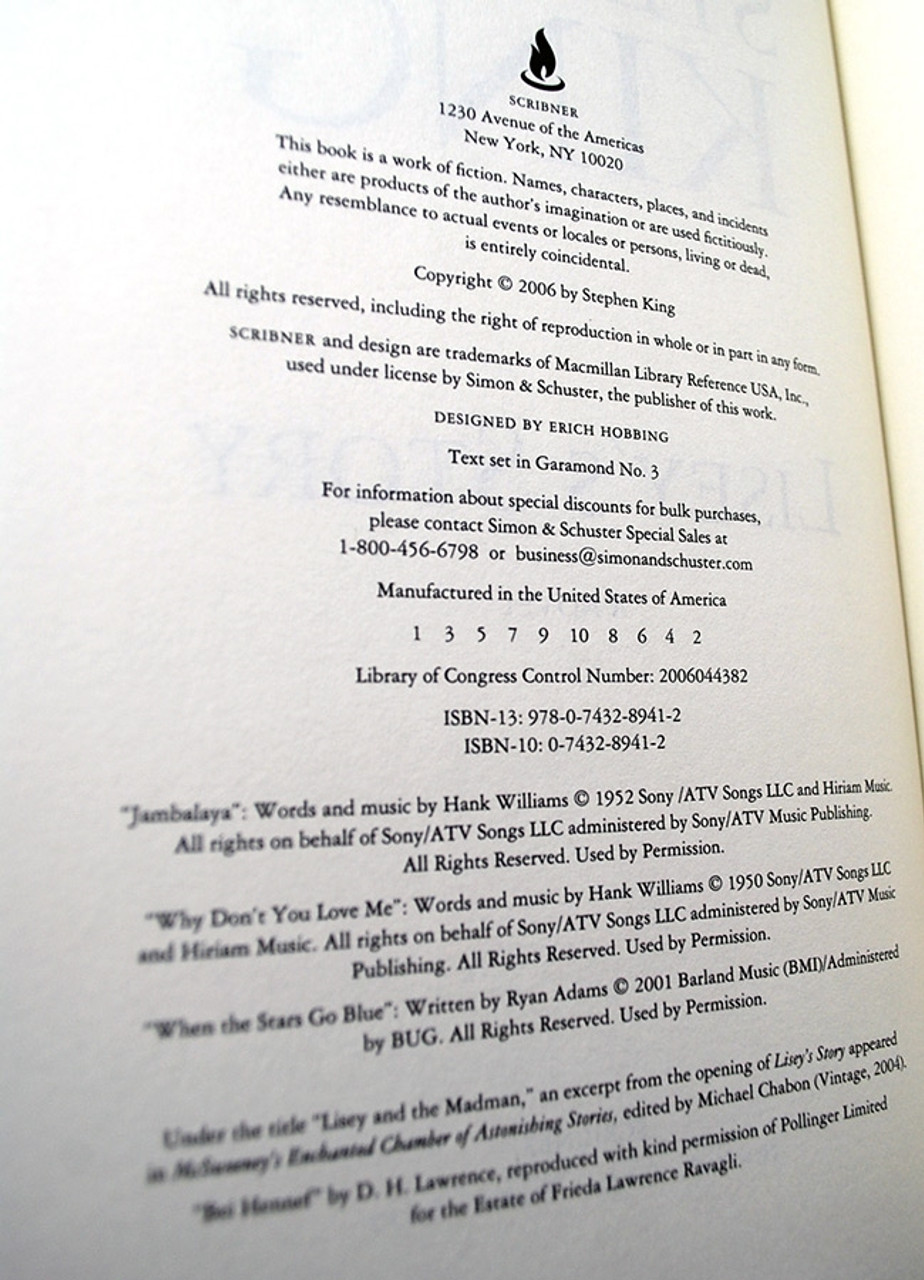 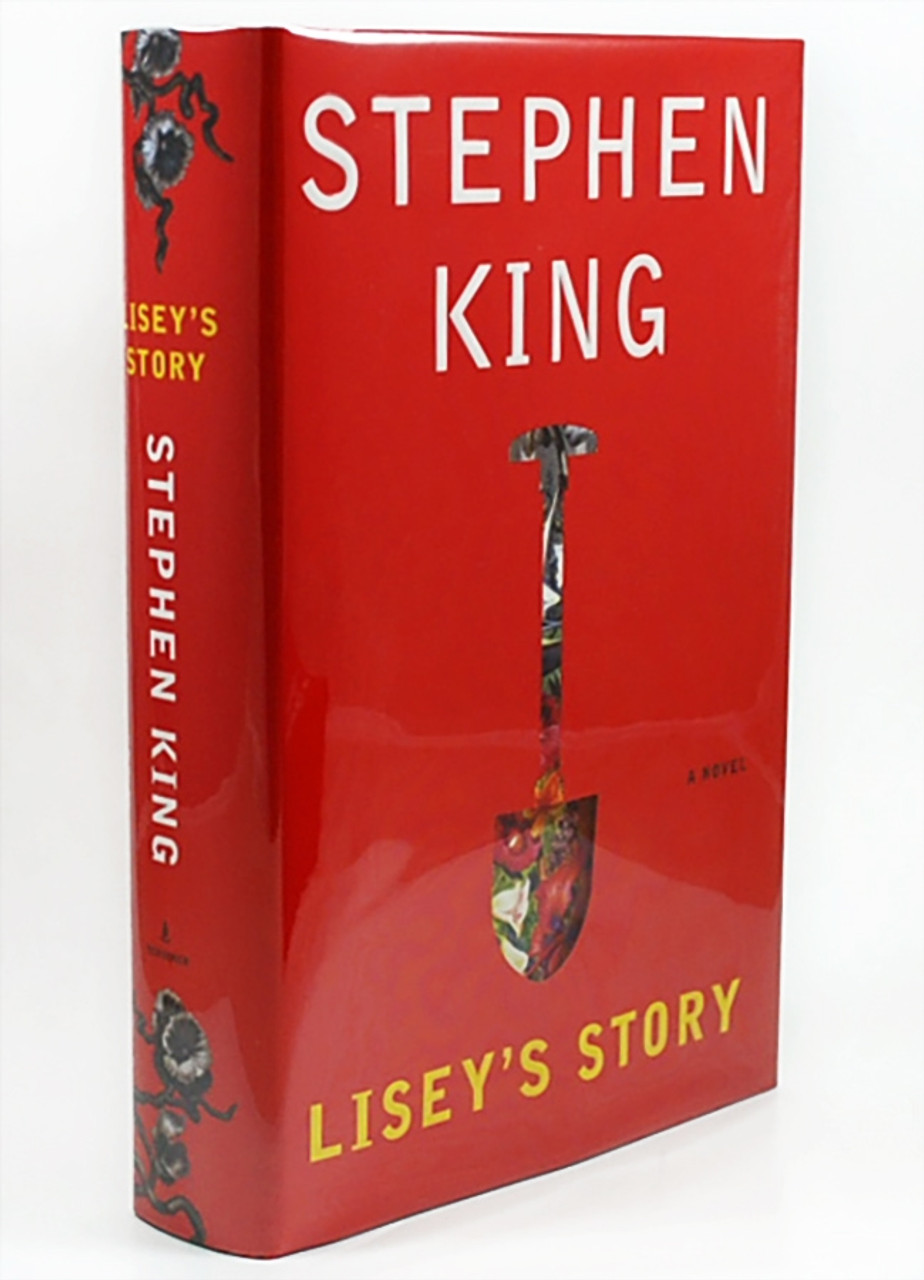 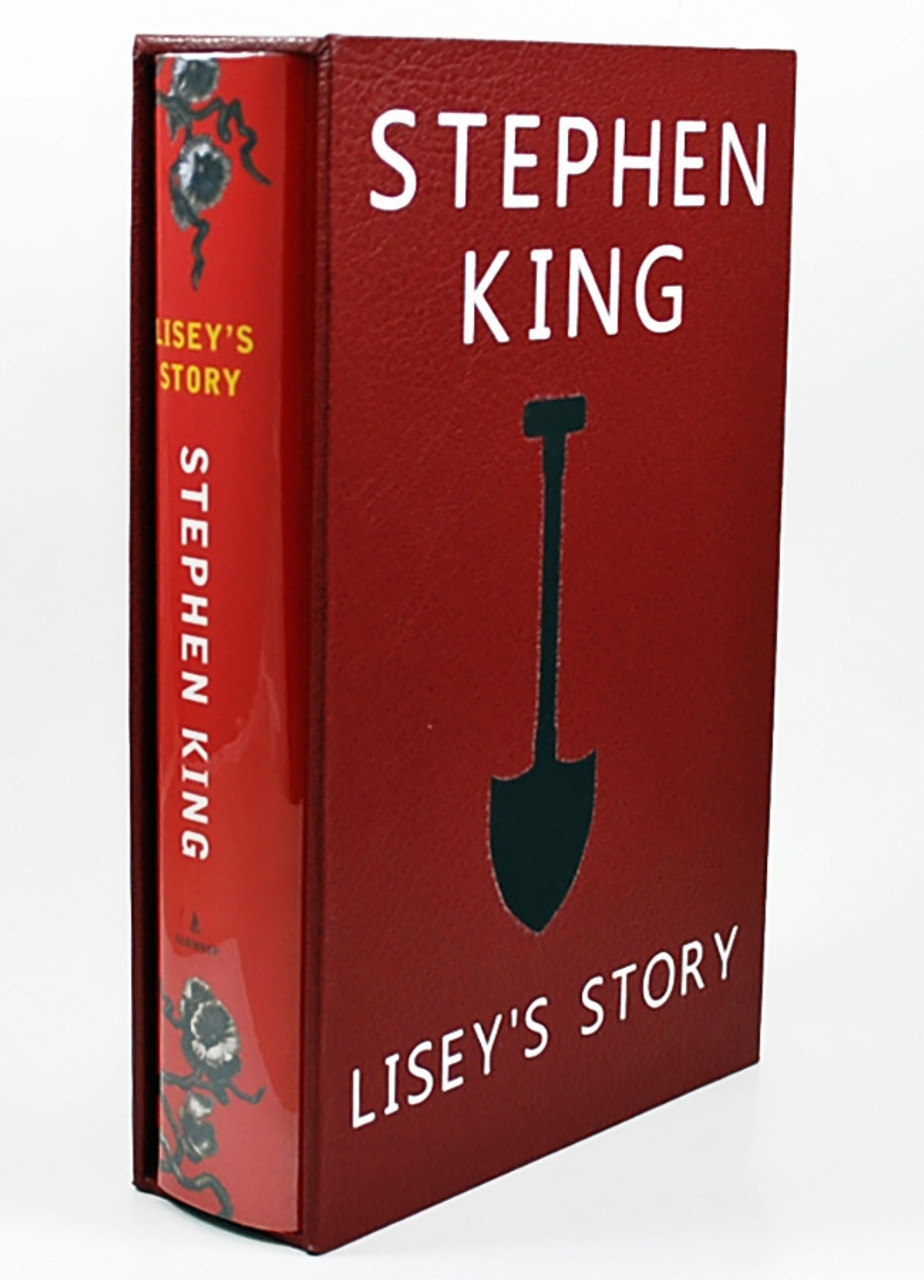 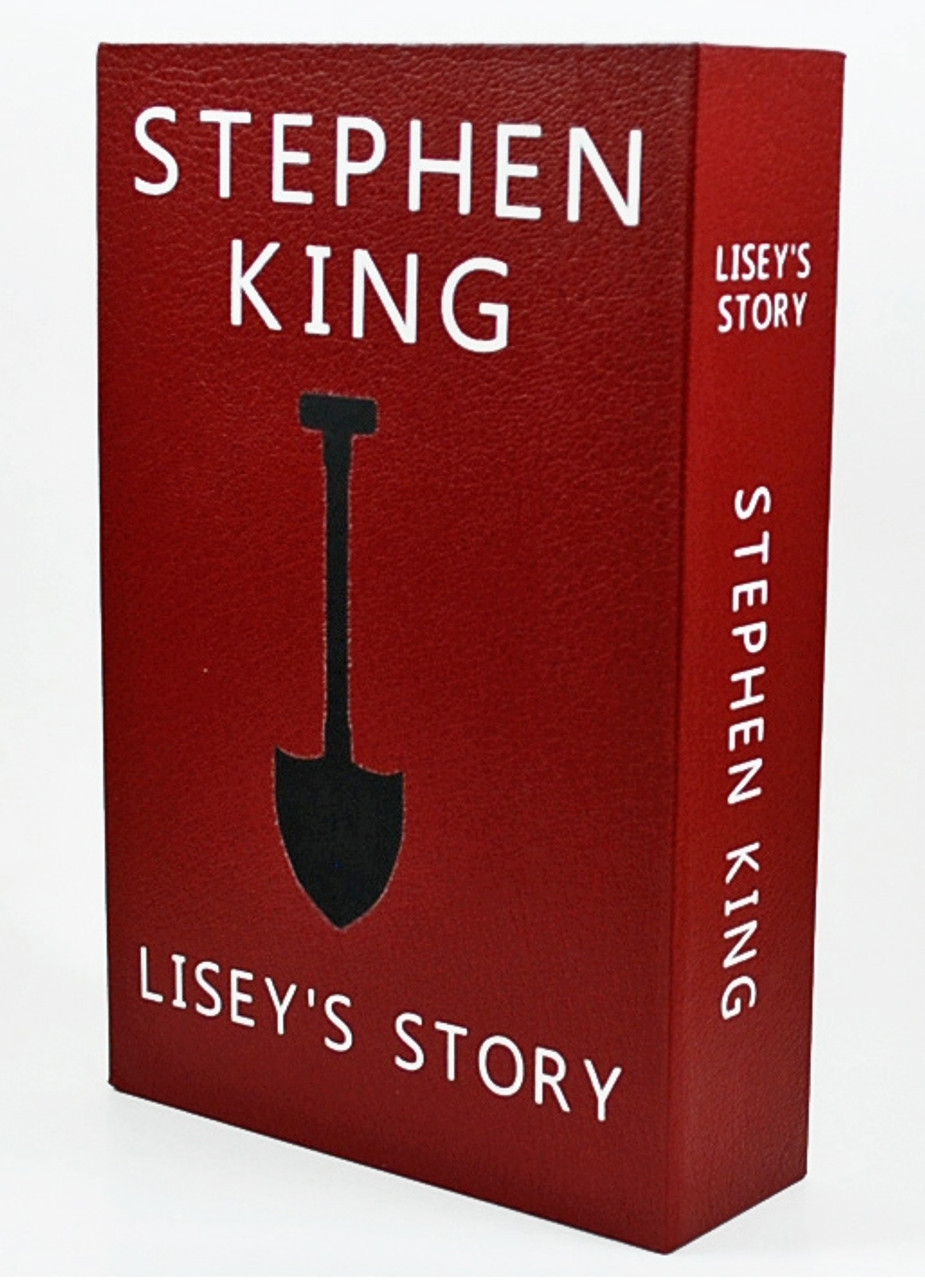 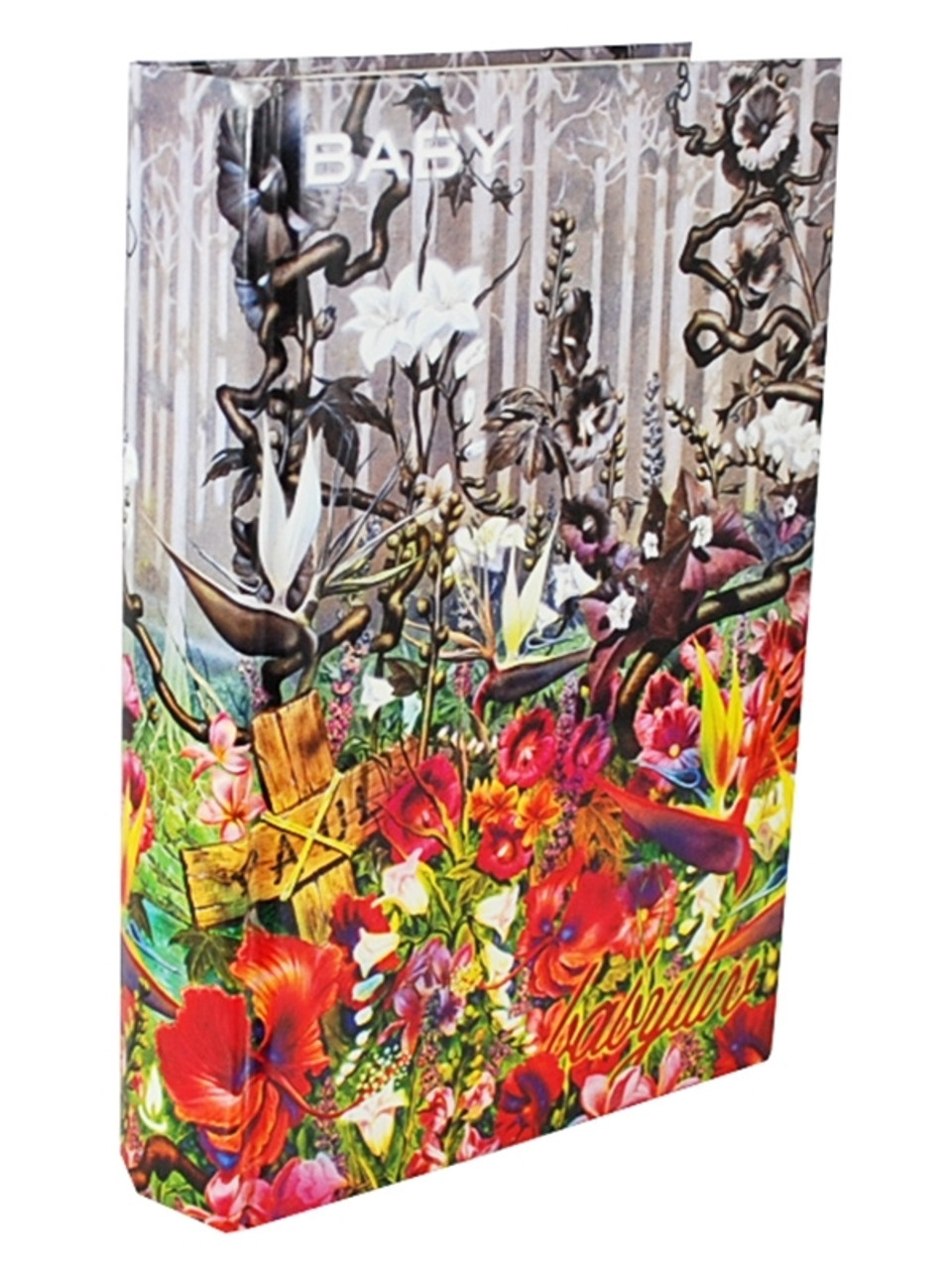 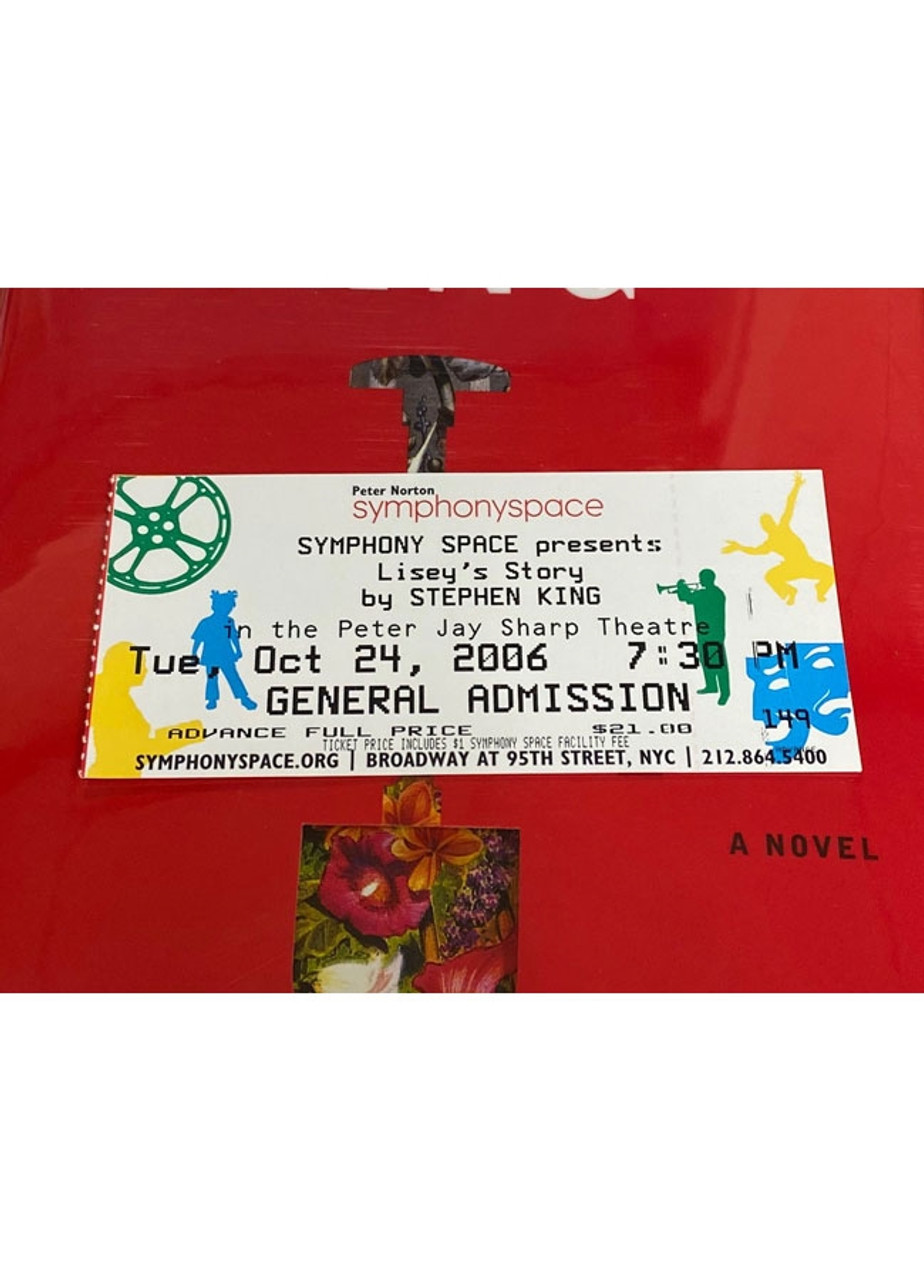 
Scribner 2006. Stephen King "Lisey's Story" First Edition. First Printing. SIGNED by the author Stephen King directly onto the FFEP (First Free End Paper). A hardcover book with dust-jacket and full number line as required on the copyright page starting with the number 1. Photos of actual item. The price is not clipped and still shows $28.00. A brand new Mylar archival protective sleeve is now on the dust-jacket. A rare book not commonly found autographed by the author. Includes a custom matching slipcase as shown. Certificate of Autograph Authenticity. 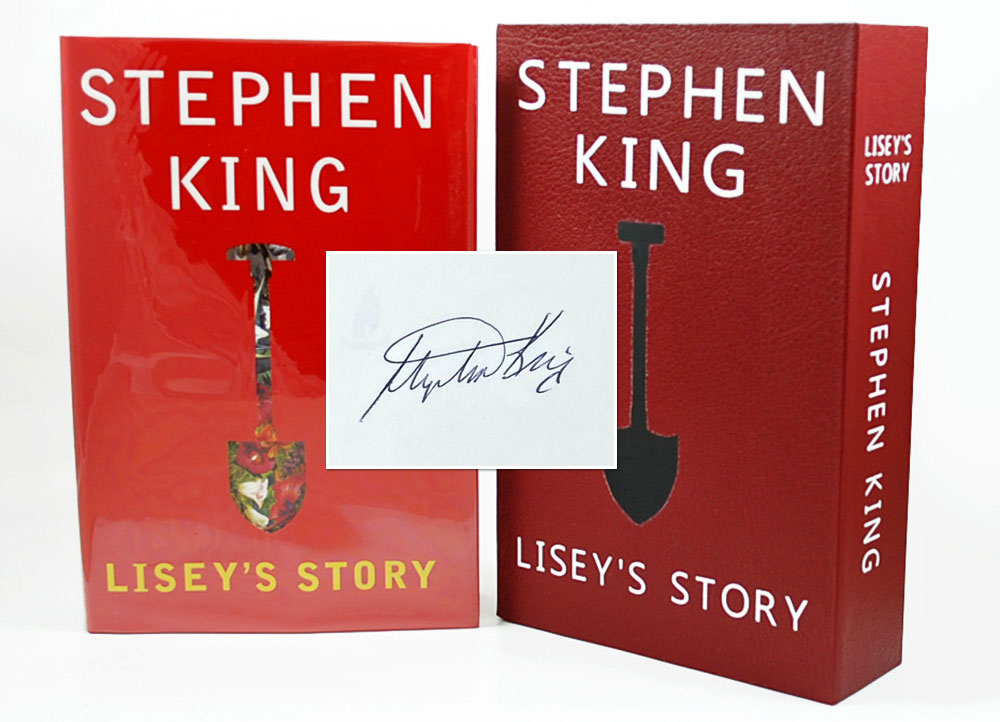 
From the acclaimed #1 New York Times and undisputed King of Horror Stephen King, comes the story of a writer’s widow who must confront his demons after his death—Lisey’s Story is about the wellsprings of creativity, the temptation of madness, and the secret language of love.

Lisey Debusher Landon lost her husband Scott two years ago, after a twenty-five year marriage of the most profound and sometimes frightening intimacy. Lisey knew there was a place Scott went—a place that both terrified and healed him, could eat him alive or give him the ideas he needed in order to live. Now it’s Lisey’s turn to face Scott’s demons, Lisey’s turn to go to that terrifying place known as Boo’ya Moon. What begins as a widow’s effort to sort through the papers of her celebrated husband becomes a nearly fatal journey into the darkness he inhabited.

Perhaps King’s most personal and powerful novel ever, Lisey’s Story is about the wellspings of creativity, the temptations of madness, and the secret language of love. 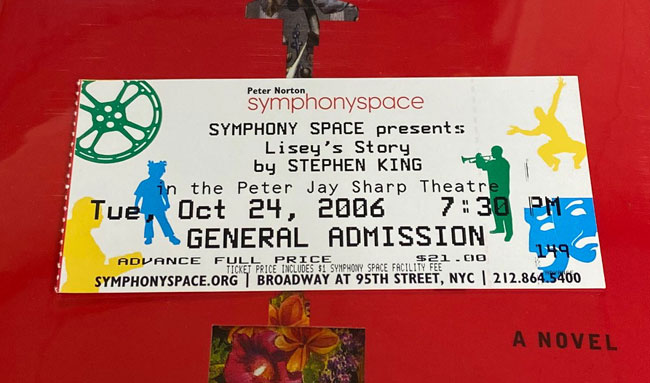 Every marriage has two hearts, one light and one dark. Lisey knew it when she first fell for Scott. And now he's dead, she knows it for sure. Lisey was the light to Scott Landon's dark for twenty-five years. As his wife, only she saw the truth behind the public face of the famous author - that he was a haunted man whose bestselling novels were based on a terrifying reality. Now Scott has gone, Lisey wants to lock herself away with her memories. But the fans have other ideas. And when the sinister threats begin, Lisey realises that, just as Scott depended on her strength - her light - to live, so she will have to draw on his darkness to survive.

"DAZZLING. . . . Stephen King at his finest and most generous." -- Nicholas Sparks, author of At First Sight and The Notebook

"MOVING. . . . A rich portrait of a marriage and the complicated affection that outlives death." -- The Washington Post

Stephen King is the author of more than fifty books, all of them worldwide bestsellers. His recent work includes the short story collection The Bazaar of Bad Dreams, Finders Keepers, Mr. Mercedes (an Edgar Award winner for Best Novel), Doctor Sleep, and Under the Dome. His novel 11/22/63—now a Hulu original television series event—was named a top ten book of 2011 by The New York Times Book Review and won the Los Angeles Times Book Prize for Mystery/Thriller. He is the recipient of the 2014 National Medal of Arts and the 2003 National Book Foundation Medal for Distinguished Contribution to American Letters and the 2014 National Medal of Arts. He lives in Bangor, Maine, with his wife, novelist Tabitha King.

Very Fine hardcover book in a Very Fine dust-jacket without any discernible flaws. Not price clipped. A wonderful bright clean copy with no bumped corners. See photos of actual book.