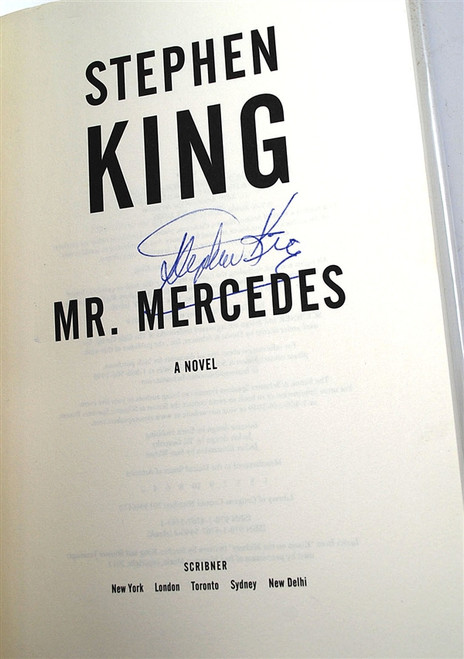 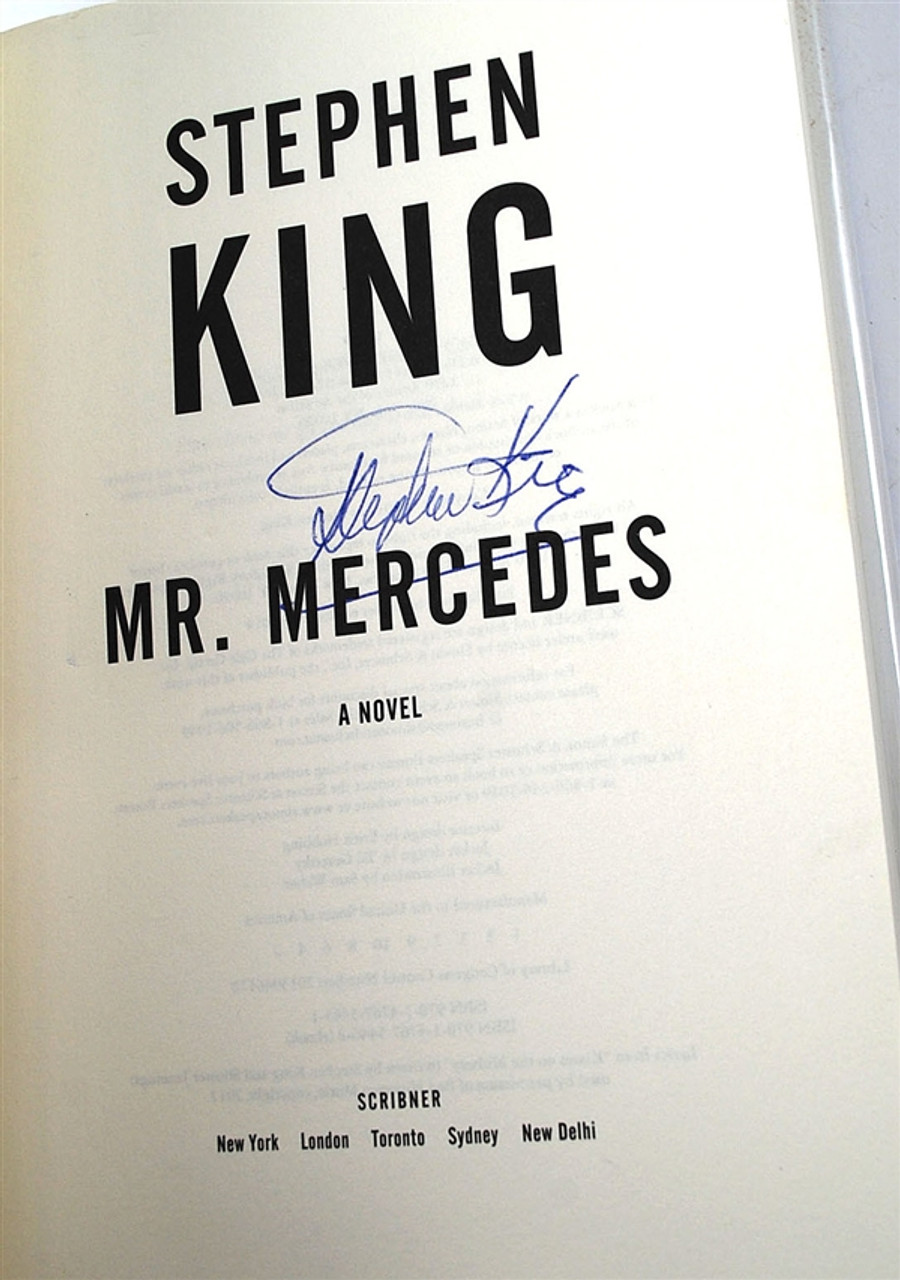 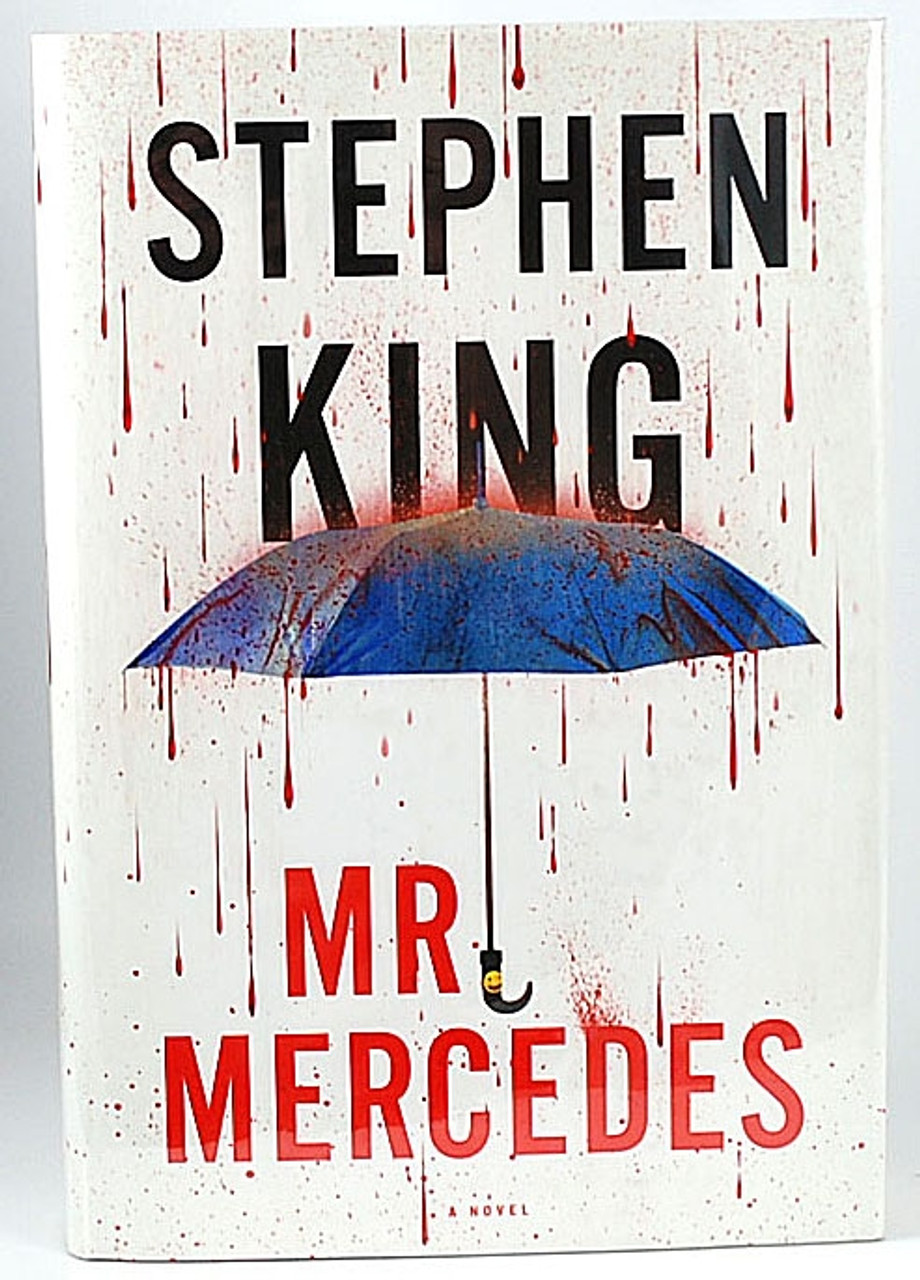 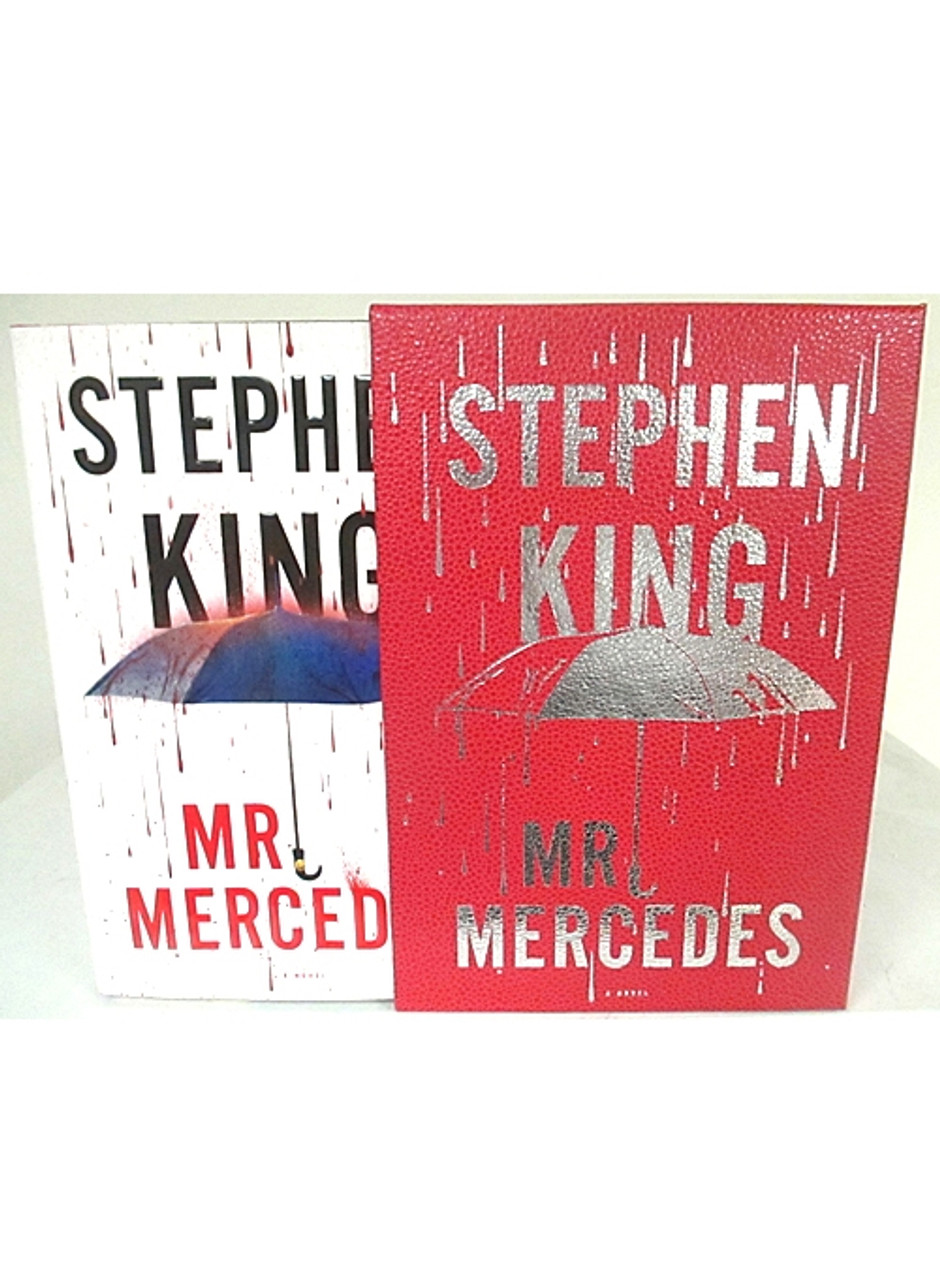 
New York. Scribner (June 3, 2014). Stephen King "Mr. Mercedes" Signed First Edition, First Printing. Stephen King personally signed this book directly onto the title page. Includes a matching slipcase to complement the design of the book. A near fine copy with a very fine dust-jacket. The dust-jacket is now protected in a new archival Mylar sleeve. A rare gift for the serious Stephen King collector. There was never a formal book signing event for this title, and very few signed copies are known to exist.

Mr. Mercedes is a novel by Stephen King. He calls it his first hard-boiled detective book. It was published on June 3, 2014. On June 10, 2014 the author described Mr. Mercedes on Twitter as the first volume of a projected trilogy, to be followed in the first half of 2015 by Finders Keepers, the first draft of which was finished around the time Mr. Mercedes was published, and End of Watch.

The novel won the 2015 Edgar Award for Best Novel from the Mystery Writers of America and Goodreads Choice Awards for 2014 in the "Mystery and Thriller" category.


WINNER OF THE 2015 EDGAR AWARD FOR BEST NOVEL

#1 New York Times bestseller! In a high-suspense race against time, three of the most unlikely heroes Stephen King has ever created try to stop a lone killer from blowing up thousands. “Mr. Mercedes is a rich, resonant, exceptionally readable accomplishment by a man who can write in whatever genre he chooses” (The Washington Post).

In the frigid pre-dawn hours, in a distressed Midwestern city, desperate unemployed folks are lined up for a spot at a job fair. Without warning, a lone driver plows through the crowd in a stolen Mercedes, running over the innocent, backing up, and charging again. Eight people are killed; fifteen are wounded. The killer escapes.

In another part of town, months later, a retired cop named Bill Hodges is still haunted by the unsolved crime. When he gets a crazed letter from someone who self-identifies as the “perk” and threatens an even more diabolical attack, Hodges wakes up from his depressed and vacant retirement, hell-bent on preventing another tragedy.

Brady Hartsfield lives with his alcoholic mother in the house where he was born. He loved the feel of death under the wheels of the Mercedes, and he wants that rush again. Only Bill Hodges, with two new, unusual allies, can apprehend the killer before he strikes again. And they have no time to lose, because Brady’s next mission, if it succeeds, will kill or maim thousands.

Mr. Mercedes is a war between good and evil, from the master of suspense whose insight into the mind of this obsessed, insane killer is chilling and unforgettable.

"Classic Stephen King. Creepy, yet realistic characters that get under your skin and stay there, a compelling story that twists and turns at breakneck speed, and delightful prose that, once again, proves that one of America’s greatest natural storytellers is also one of its finest writers." (Associated Press)

Stephen King is the author of more than fifty books, all of them worldwide bestsellers. His recent work includes The Bazaar of Bad Dreams, Drunken Fireworks, Finders Keepers, Revival, Mr. Mercedes, Doctor Sleep, and Under the Dome. His novel 11/22/63, adapted as a 2016 series on Hulu starring James Franco, was named a top ten book of 2011 by The New York Times Book Review and won the Los Angeles Times Book Prize for Mystery/Thriller. King is the recipient of the 2003 National Book Foundation Medal for Distinguished Contribution to American Letters and the 2014 National Medal of Arts. He lives in Bangor, Maine, with his wife, novelist Tabitha King.

A Fine hardcover book in a Fine dust-jacket. The slipcase is also new without any flaws.