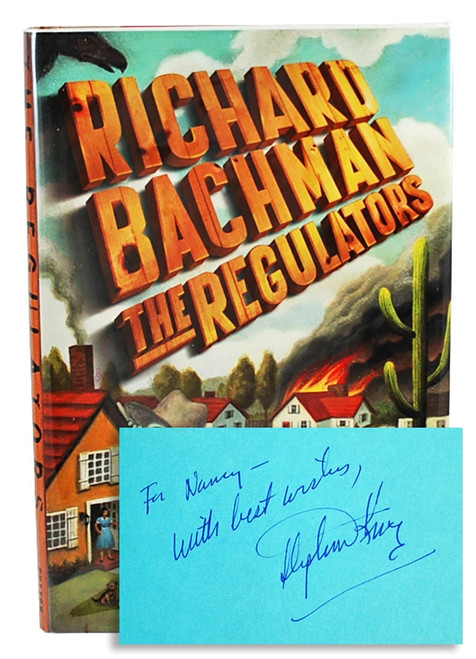 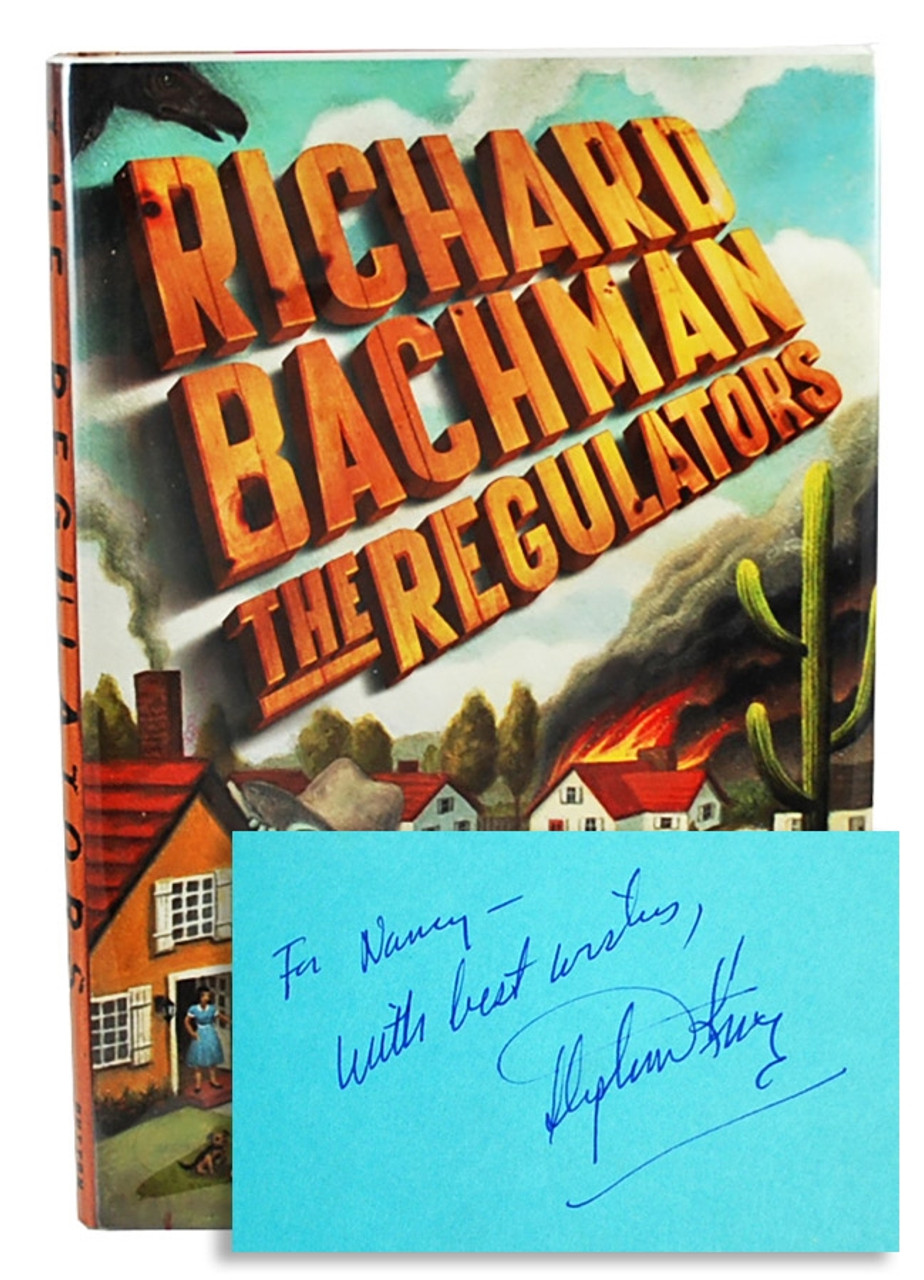 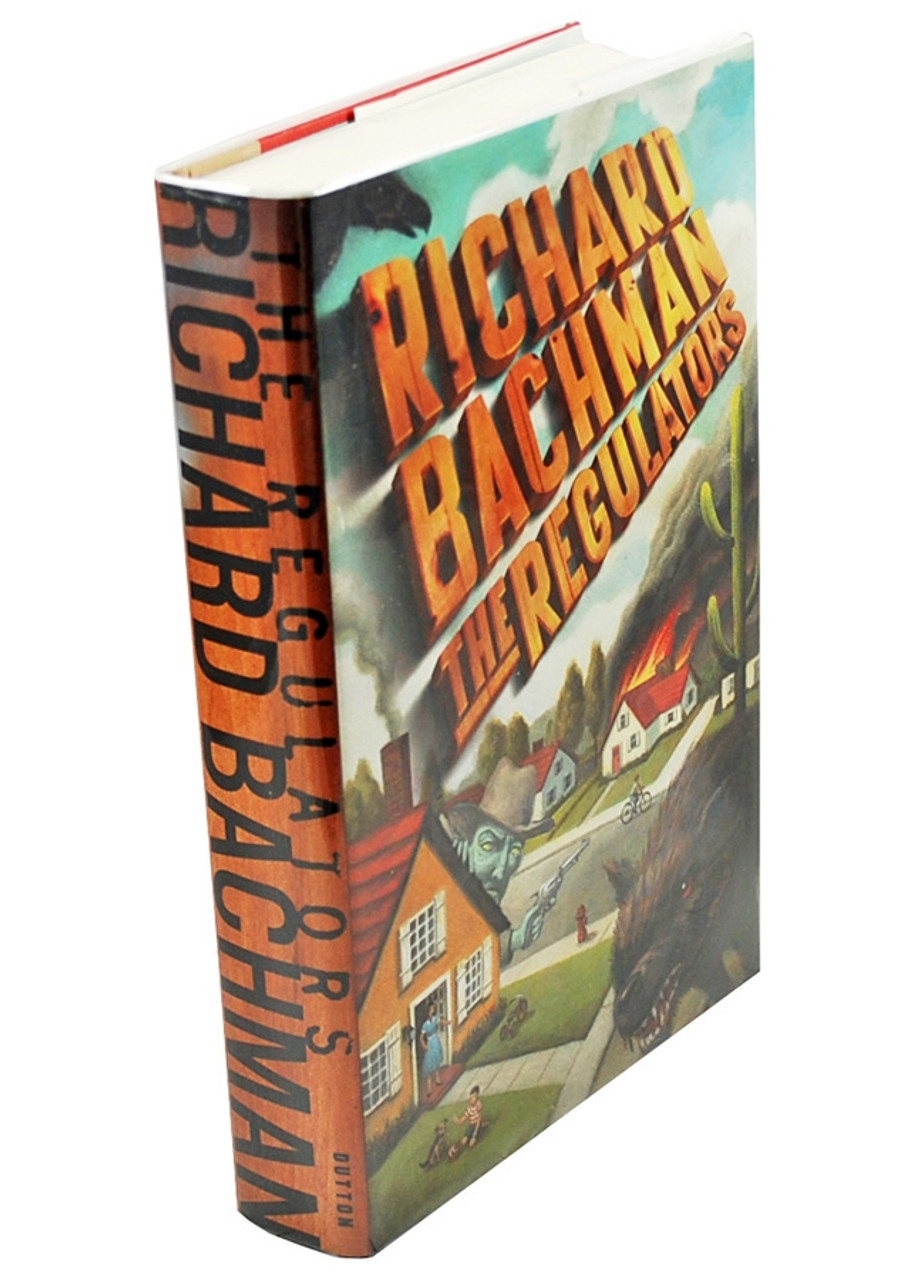 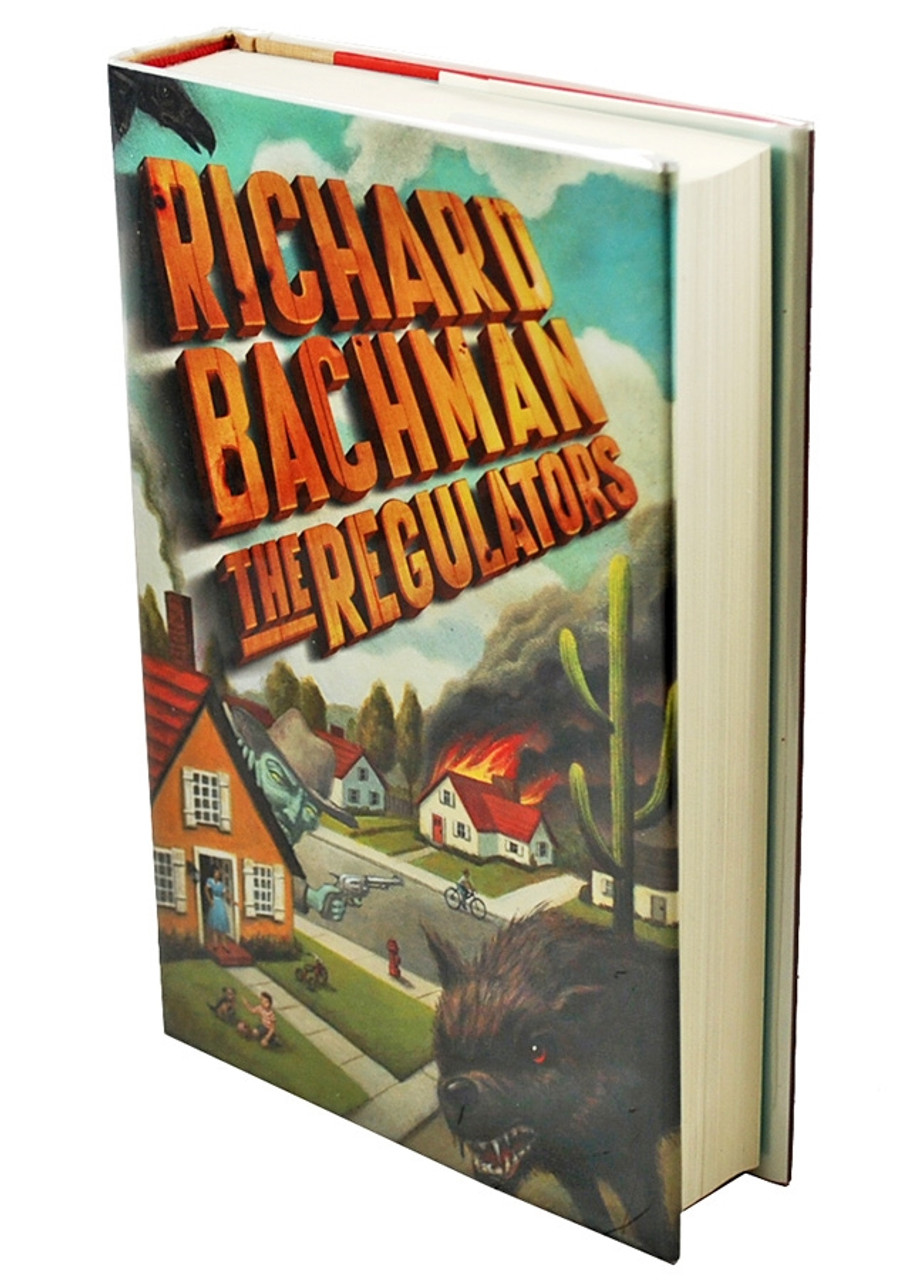 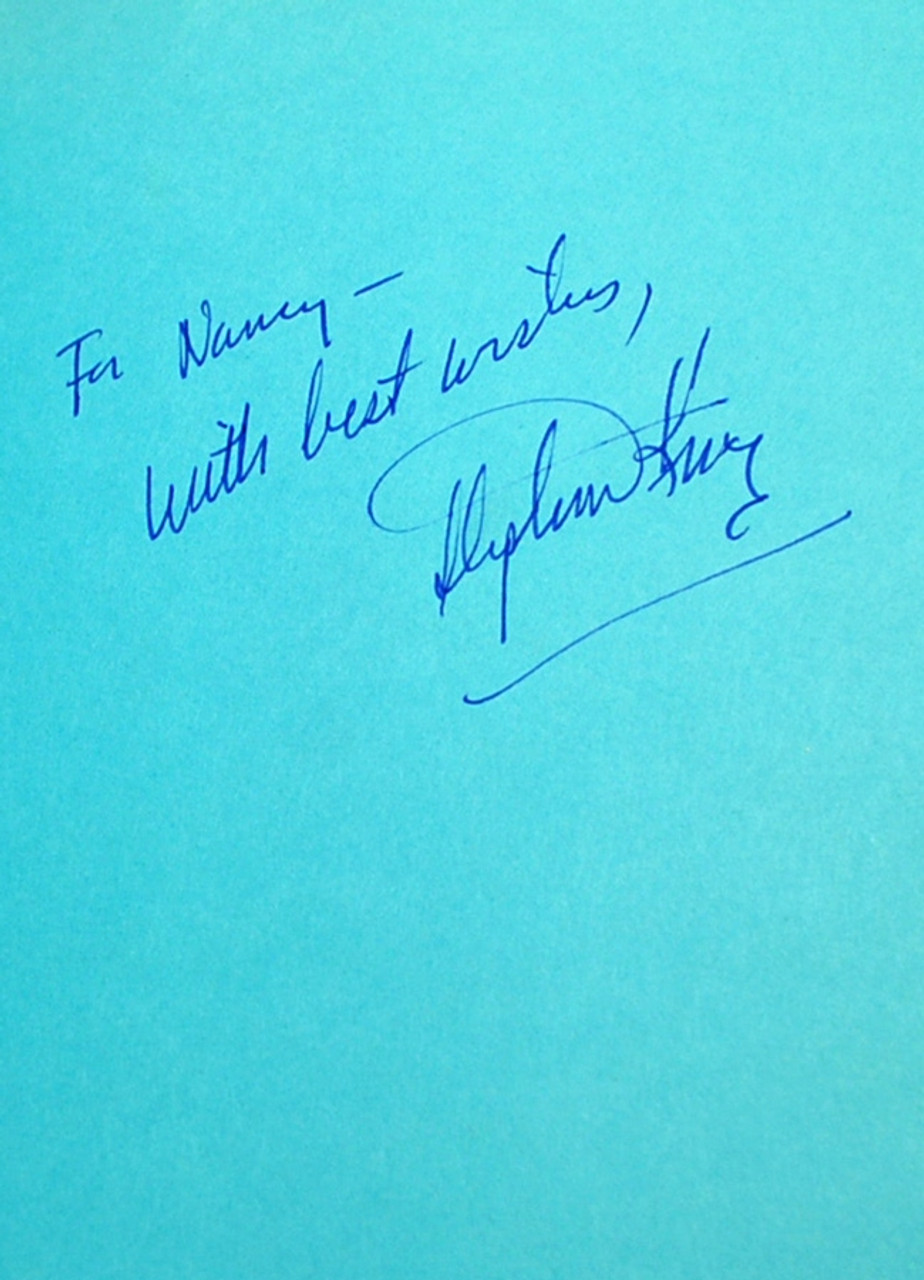 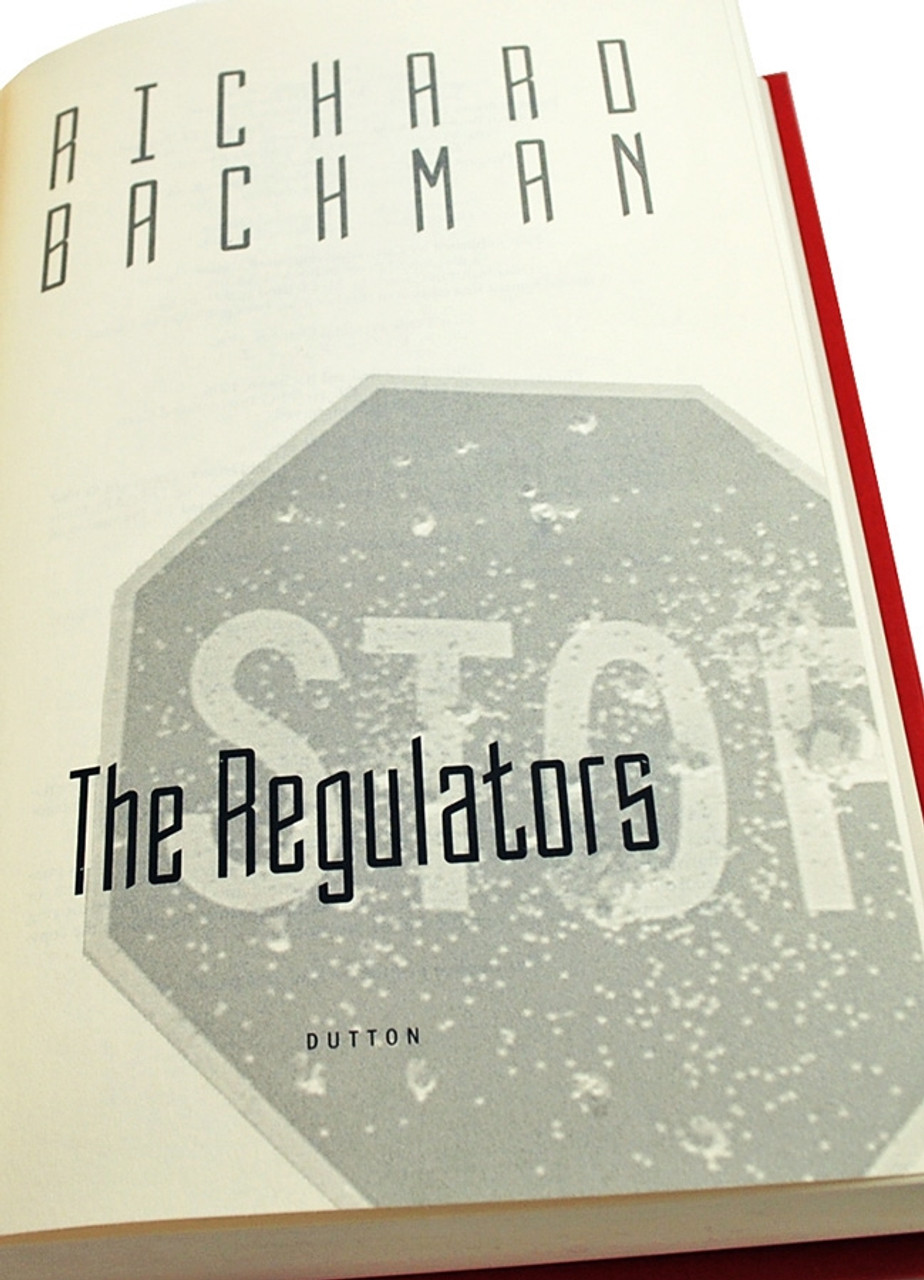 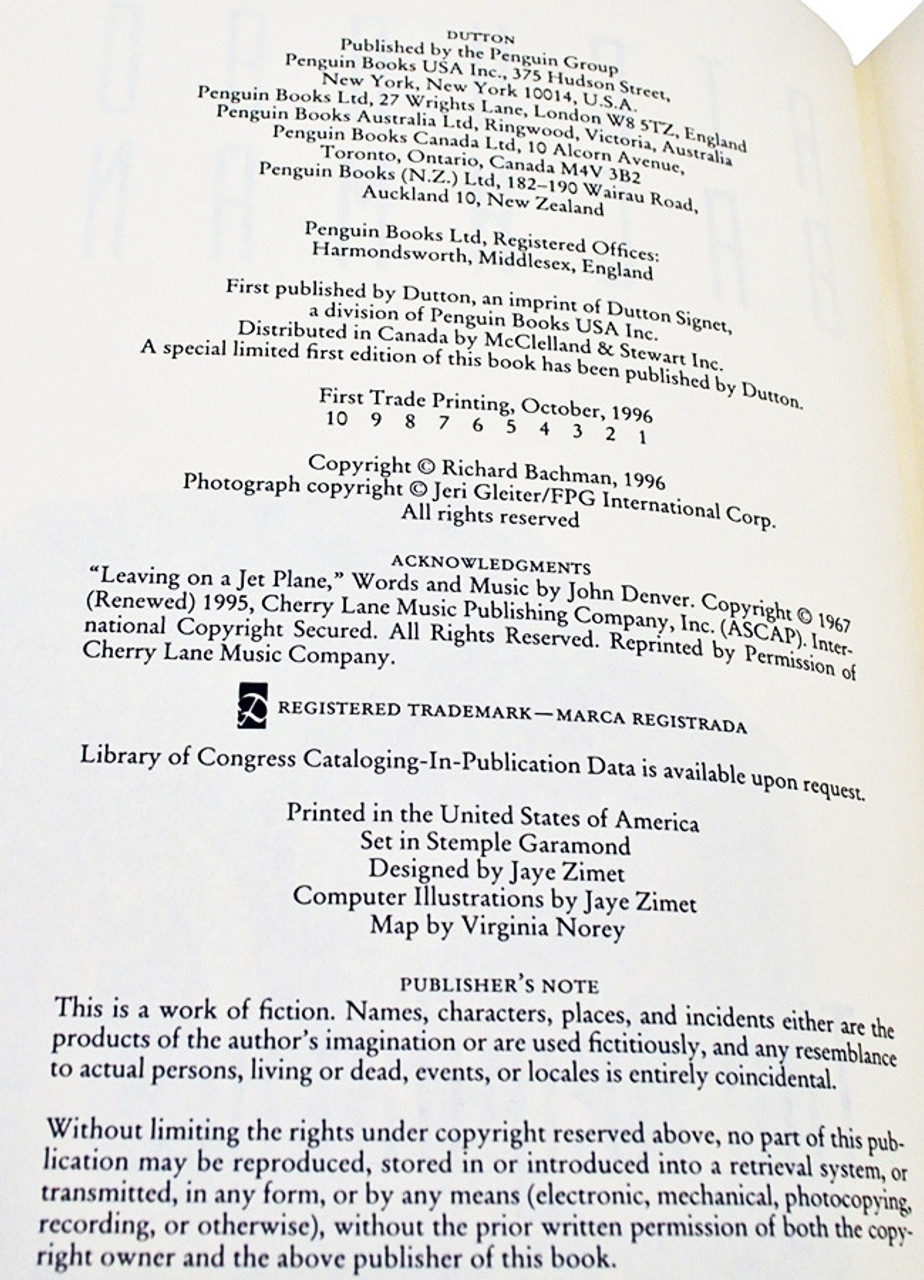 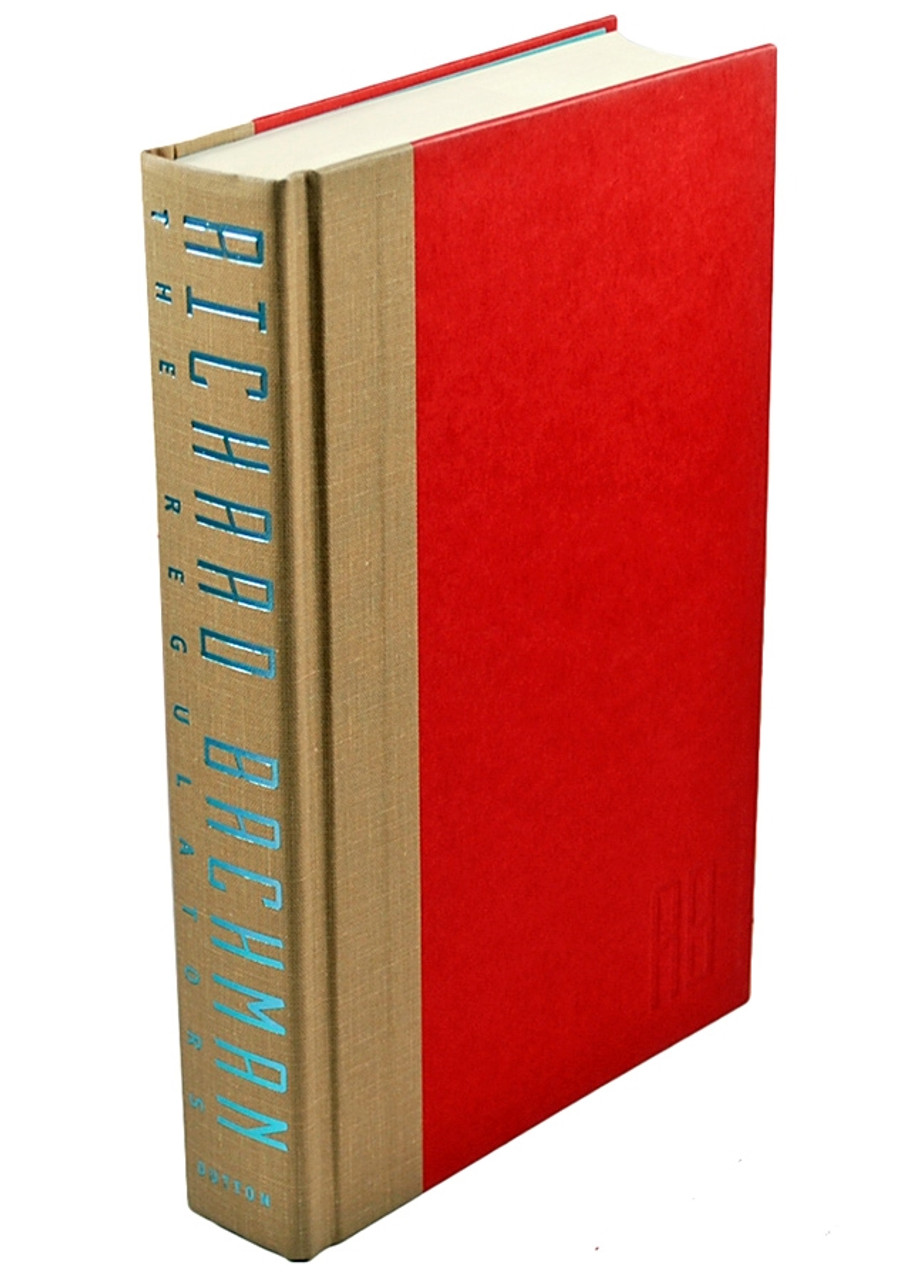 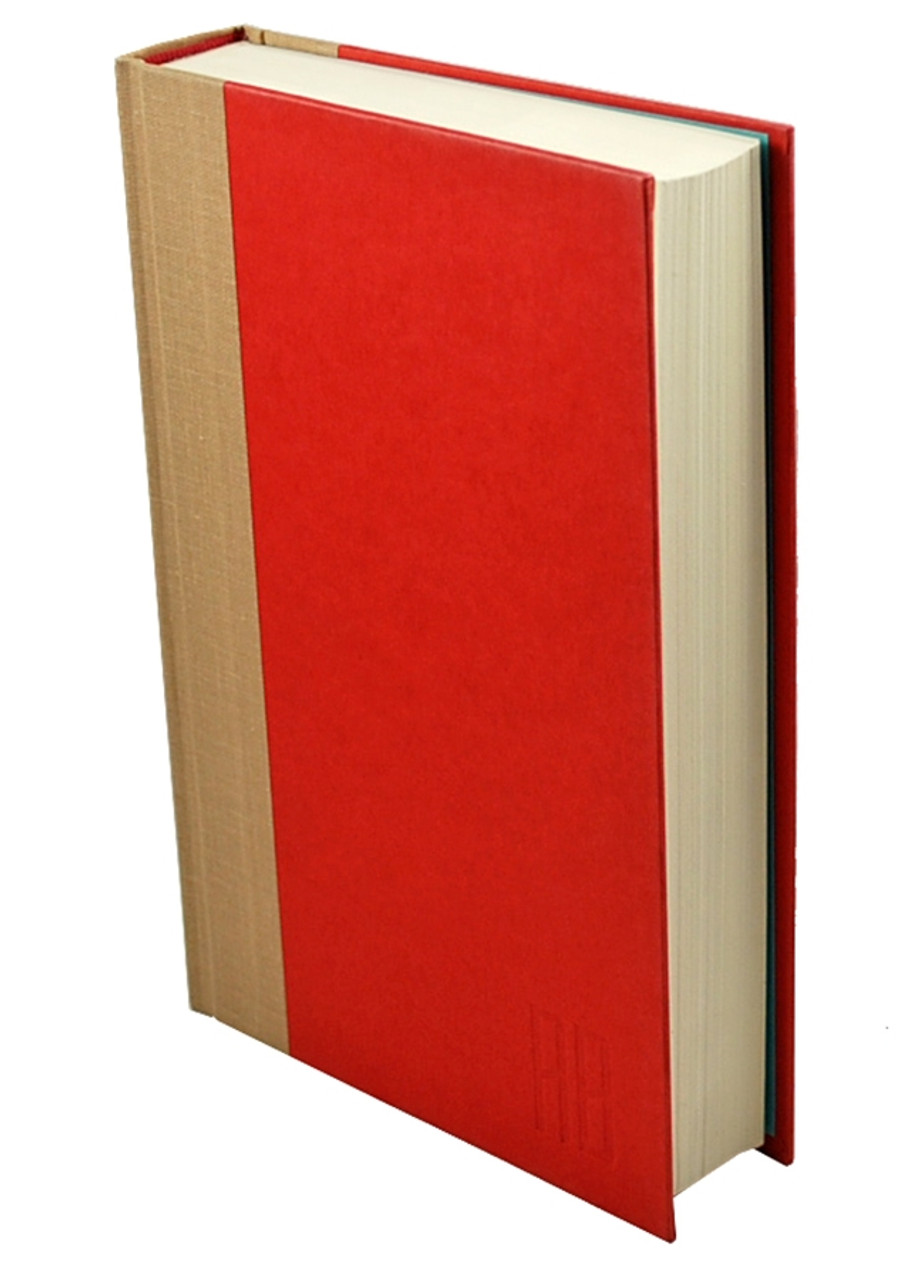 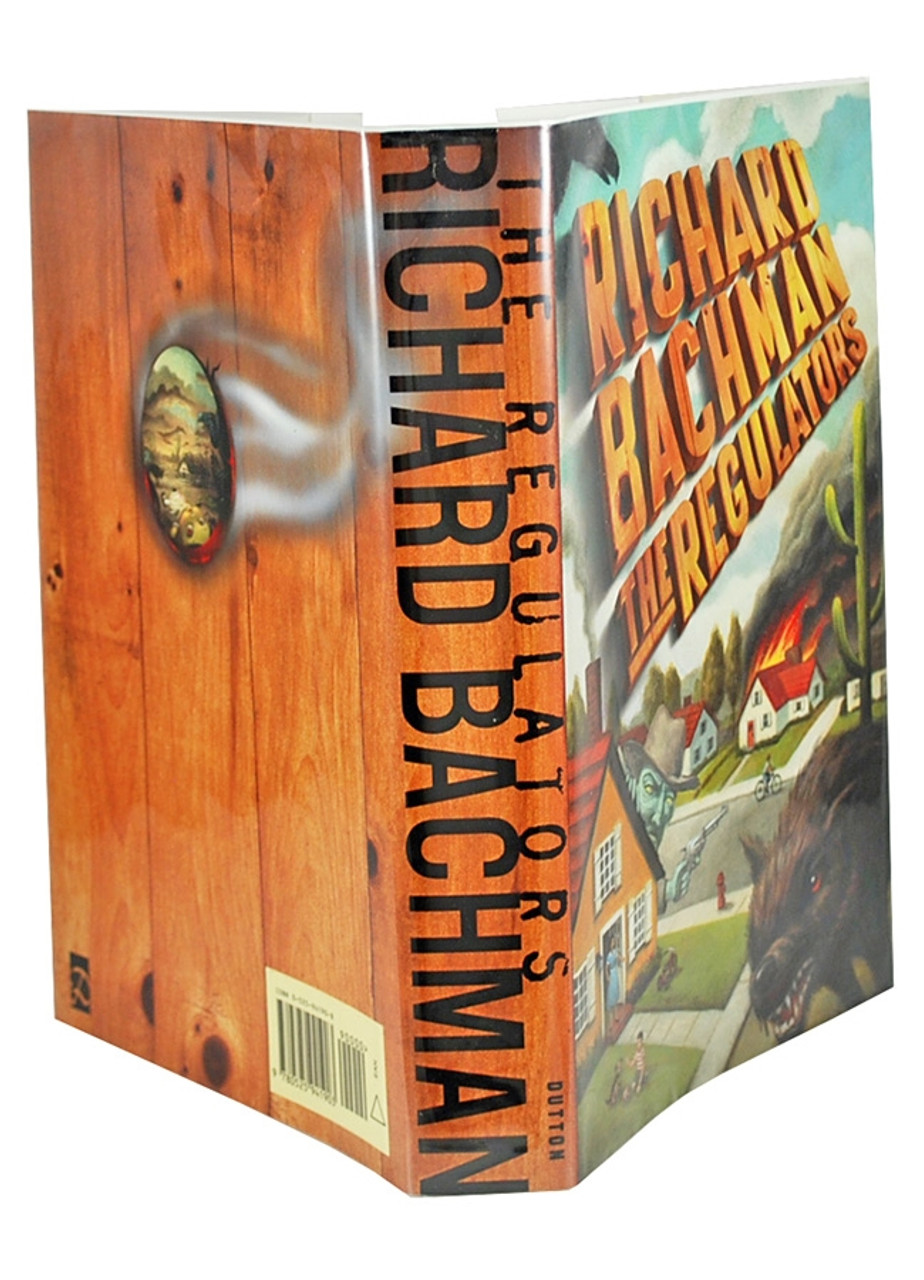 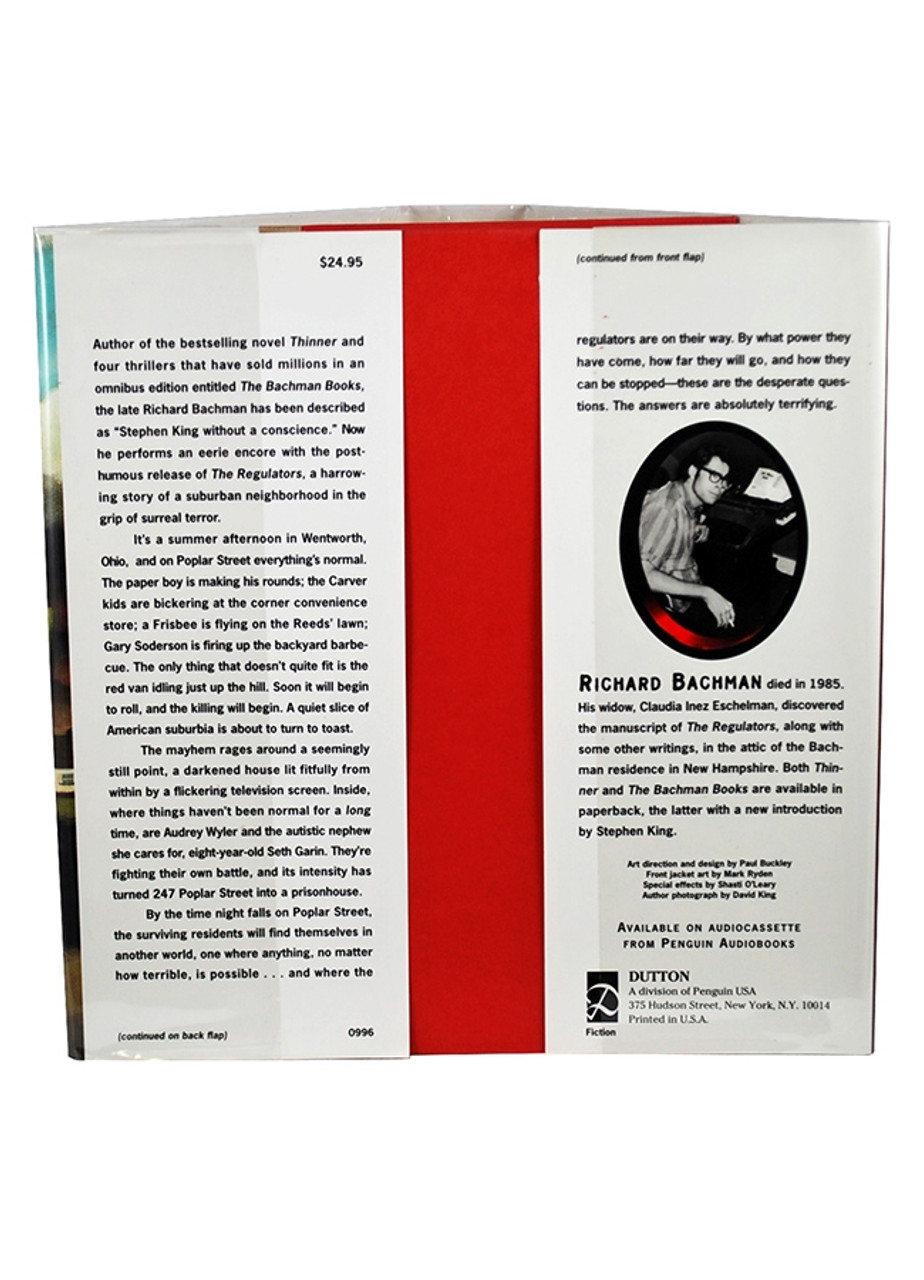 About
The Regulators is a novel by Stephen King under the pseudonym Richard Bachman. It was published in 1996 at the same time as its "mirror" novel, Desperation. The two novels represent parallel universes relative to one another, and most of the characters present in one novel's world also exist in the other novel's reality, albeit in different circumstances. Additionally, the hardcover first editions of each novel, if set side by side, make a complete painting, and on the back of each cover is also a peek at the opposite's cover. King had previously "killed off" Bachman after the pseudonym was publicly exposed around the time of the 1984 release of the Bachman novel Thinner. However, on the book's jacket and in a tongue-in-cheek introduction by the book's editor, it was alleged that this 1996 work was written by Bachman years earlier, but the manuscript had only recently been discovered by his widow in a trunk.
source: Wikipedia

Hardcover with Dust-jacket fully protected with a mylar cover.

Stephen Edwin King (born September 21, 1947) is an American author of horror, supernatural fiction, suspense, science fiction and fantasy. His books have sold more than 350 million copies, many of which have been adapted into feature films, miniseries, television series, and comic books. King has published 58 novels, including seven under the pen name Richard Bachman, and six non-fiction books. He has written around 200 short stories, most of which have been published in book collections.
Fine/Fine. Clean & straight boards. No markings, writings, or stampings. No attached bookplates or signs of any removed. A well-cared for book, protected from any potential damage. This book stands out as having had exemplary care. Square and tight spine. Not price-clipped. Excellent original example. Dust-jacket fully protected with a mylar cover. A beautiful, tight copy. Book Grading Definitions

A Unique Signed Limited Edition of The Regulators, personally signed by "Richard Bachman" (aka Stephen King) Still two to choose from #169(SOLD) #265, and #387. Please indicate your choice in the...

A wonderful collectible in this condition. Stephen King, "The Stand" dj/HC Doubleday 1978, First Edition, First Printing. First Edition as stated on copyright page. T39 on pg. 823 as required and...

Borderlands Press 2004 John DeChancie "A LITTLE GRAY BOOK OF ALIEN STORIES" Signed First Edition of only 500 signed and numbered copies, this being number 292. About the author John DeChancie is...