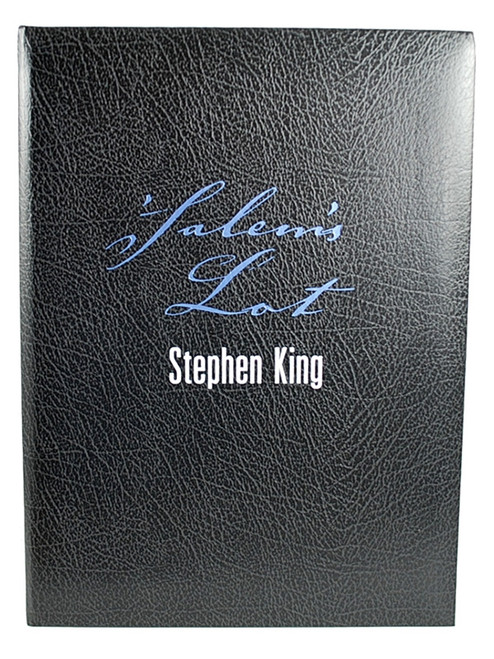 
A Signed Limited Edition of only 750 hand-numbered copies, personally signed by the artist Glenn Chadbourne.


Cemetery Dance 2016. Stephen King "Salem's Lot". Published in three states. This is the Traycased Oversized Hardcover Numbered Artist Edition signed by the artist and limited to only 750 hand-numbered copies printed in two colors on a specialty paper stock; bound with a different fine binding, two color hot foil stamping, and full color illustrated endpapers; a full-color signature sheet signed by the artists and featuring artwork by Glenn Chadbourne; and housed in a traycase. This edition is now OUT OF PRINT from the publisher.

A Collectible Limited ONE TIME PRINTING featuring an introduction by Stephen King, an afterword by Clive Barker, color paintings by David Palumbo, and Special Bonus Features including deleted scenes, two related short stories, and a map of the town by Glenn Chadbourne! Volume Two in The Stephen King Doubleday Years Set!

'Salem's Lot is a small New England town with white clapboard houses, tree-lined streets, and solid church steeples. That summer in 'Salem's Lot was a summer of homecoming and return; spring burned out and the land lying dry, crackling underfoot. Late that summer, Ben Mears returned to 'Salem's Lot hoping to cast out his own devils and found instead a new, unspeakable horror.

A stranger had also come to the Lot, a stranger with a secret as old as evil, a secret that would wreak irreparable harm on those he touched and in turn on those they loved.

All would be changed forever—Susan, whose love for Ben could not protect her; Father Callahan, the bad priest who put his eroded faith to one last test; and Mark, a young boy who sees his fantasy world become reality and ironically proves the best equipped to handle the relentless nightmare of 'Salem's Lot.

This is a rare novel, almost hypnotic in its unyielding suspense, which builds to a climax of classic terror. You will not forget the town of 'Salem's Lot nor any of the people who used to live there.

• an introduction by Stephen King
• an afterword by Clive Barker
• many deleted scenes that were cut from the original manuscript
• the short stories "Jerusalem's Lot" and "One for the Road"
• deluxe oversized design (7 inches X 10 inches) featuring two color interior printing as part of the page design
• printed on a heavy interior specialty paper stock that is much thicker than the paper in a normal trade edition
• custom-made slipcase for the Gift Edition
• epic wrap-around full color dust jacket artwork by David Palumbo
• full color interior paintings by David Palumbo
• interior artwork will be printed on a heavy glossy stock and tipped into the book
• an original map of the town drawn by Glenn Chadbourne exclusively for this special edition
• signature sheet artwork for all three editions by Glenn Chadbourne
• high-quality end-papers and fine bindings
• an exclusive reproduction of the first reader's letter to point out the Father "Cody" error and several internal memos from Doubleday about changing the pricing after the first edition of the book was already printed
• extremely collectible print run that is a tiny fraction of the TENS OF MILLIONS of copies of this novel you've seen in bookstores over the years!

David Palumbo is a painter whose work primarily depicts narrative, moody scenes that combine a modern psychology and texture with heavy influences of classical realism and golden-age illustration. His images can be found most often on book covers and gaming cards and has received numerous honors including a Chesley award and several Spectrum medals. In addition to his genre illustration, he has also been showing in fine art galleries from New York to Paris for over 10 years and has published multiple collections of his personal paintings. Palumbo currently lives in Philadelphia and enjoys painting and creating every single day. 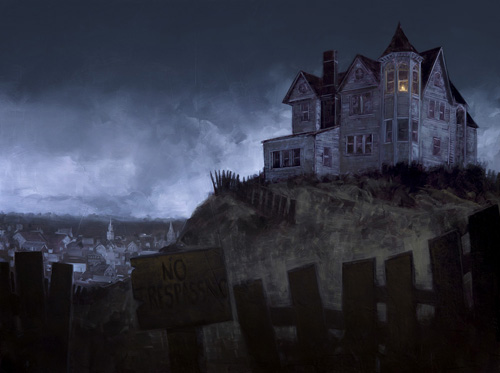 Very Fine in a Very Fine tray-case. The volume along with the tray-case is in mint condition without any flaws. There are no marks, writings, or stamps and free of any bumped corners. No attached bookplates or indication of any removed. Unread book with tight spine.