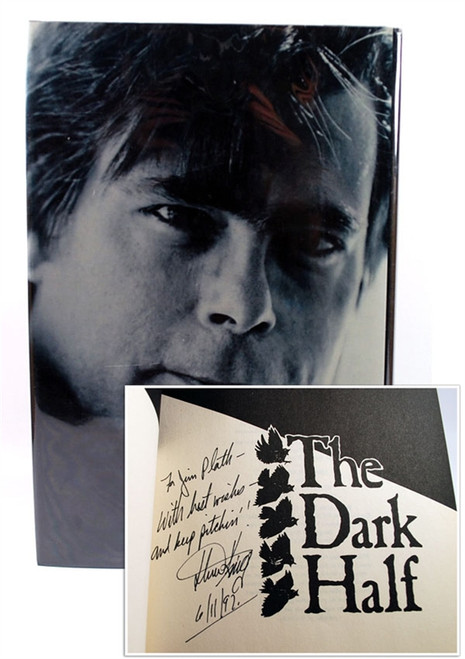 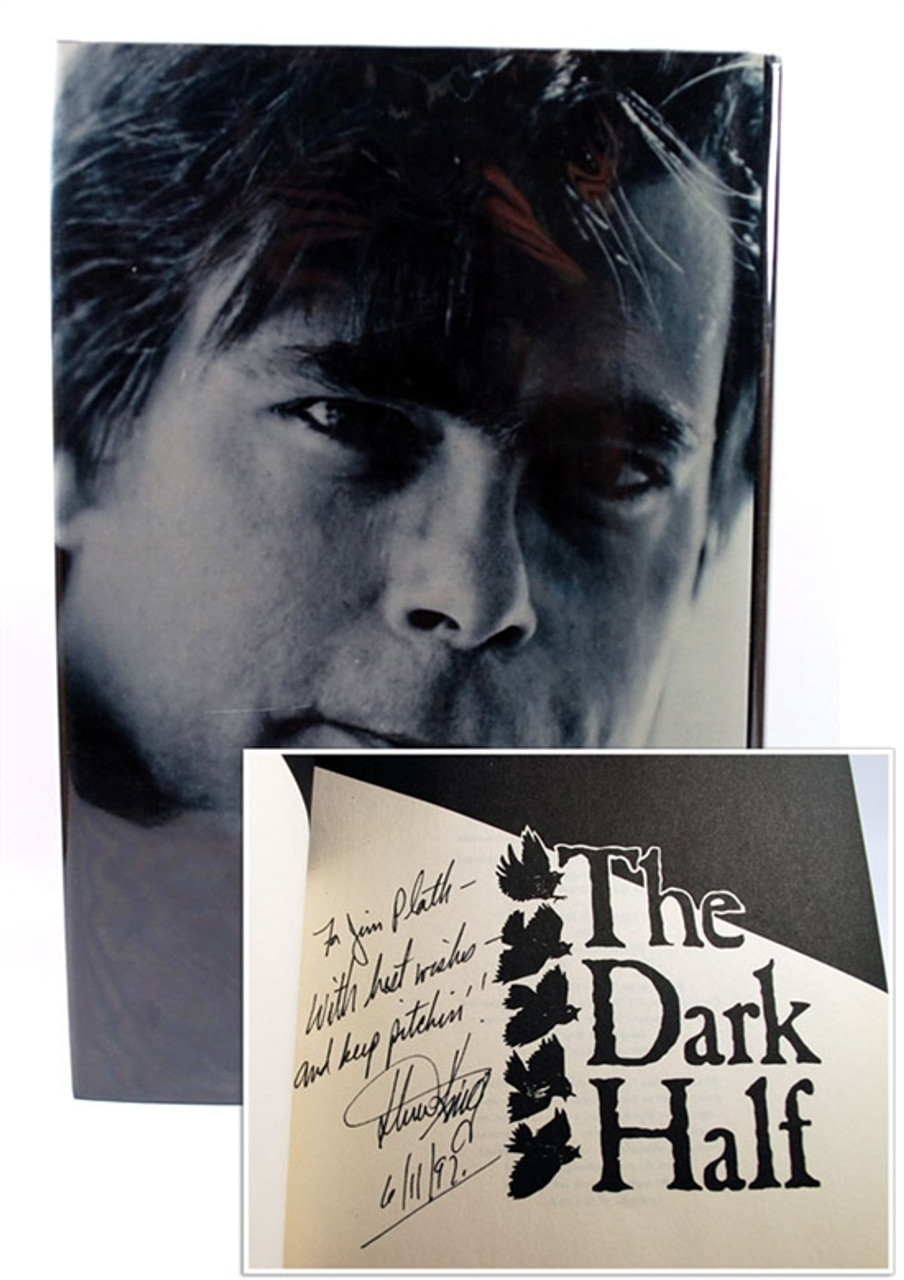 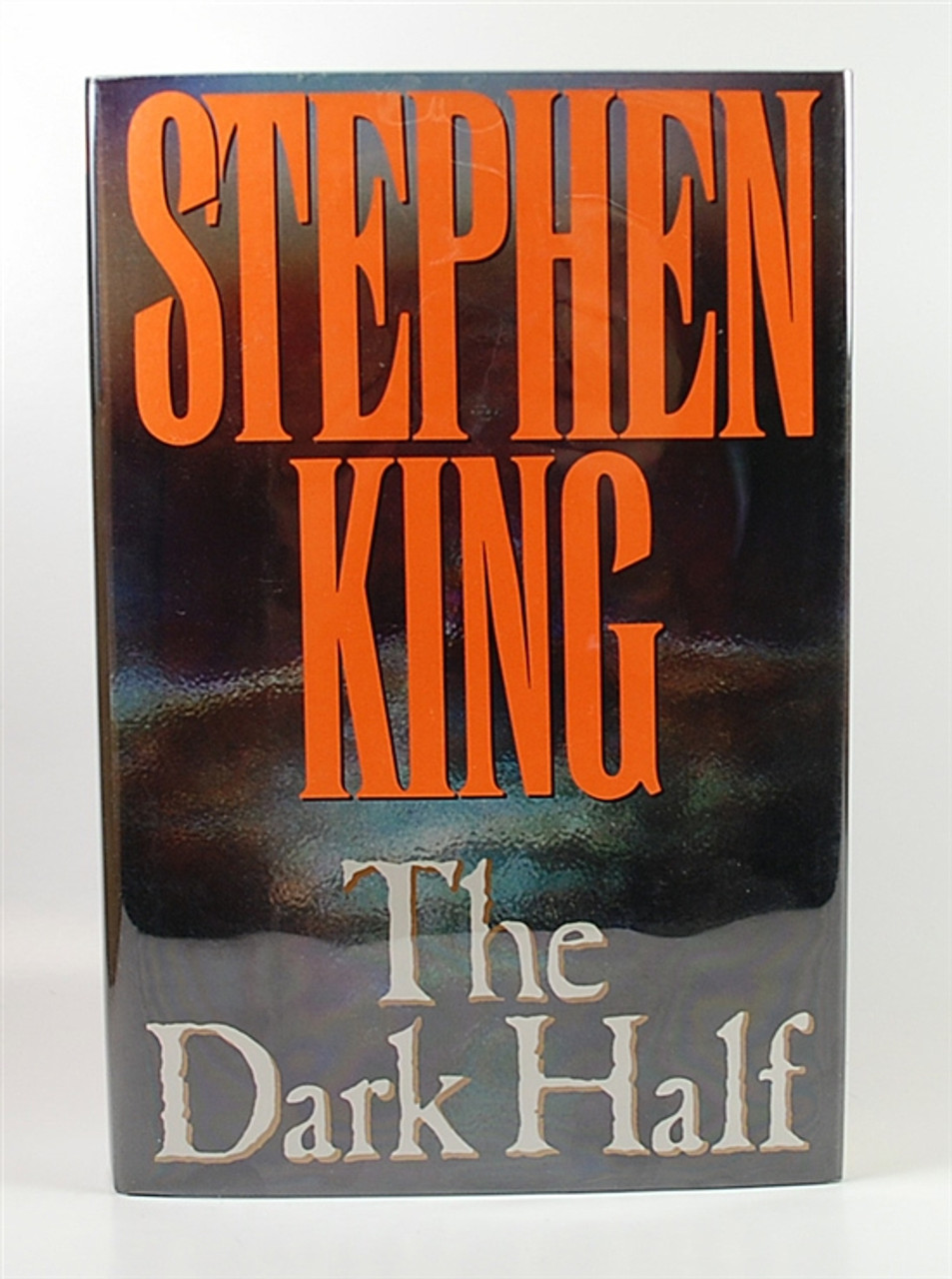 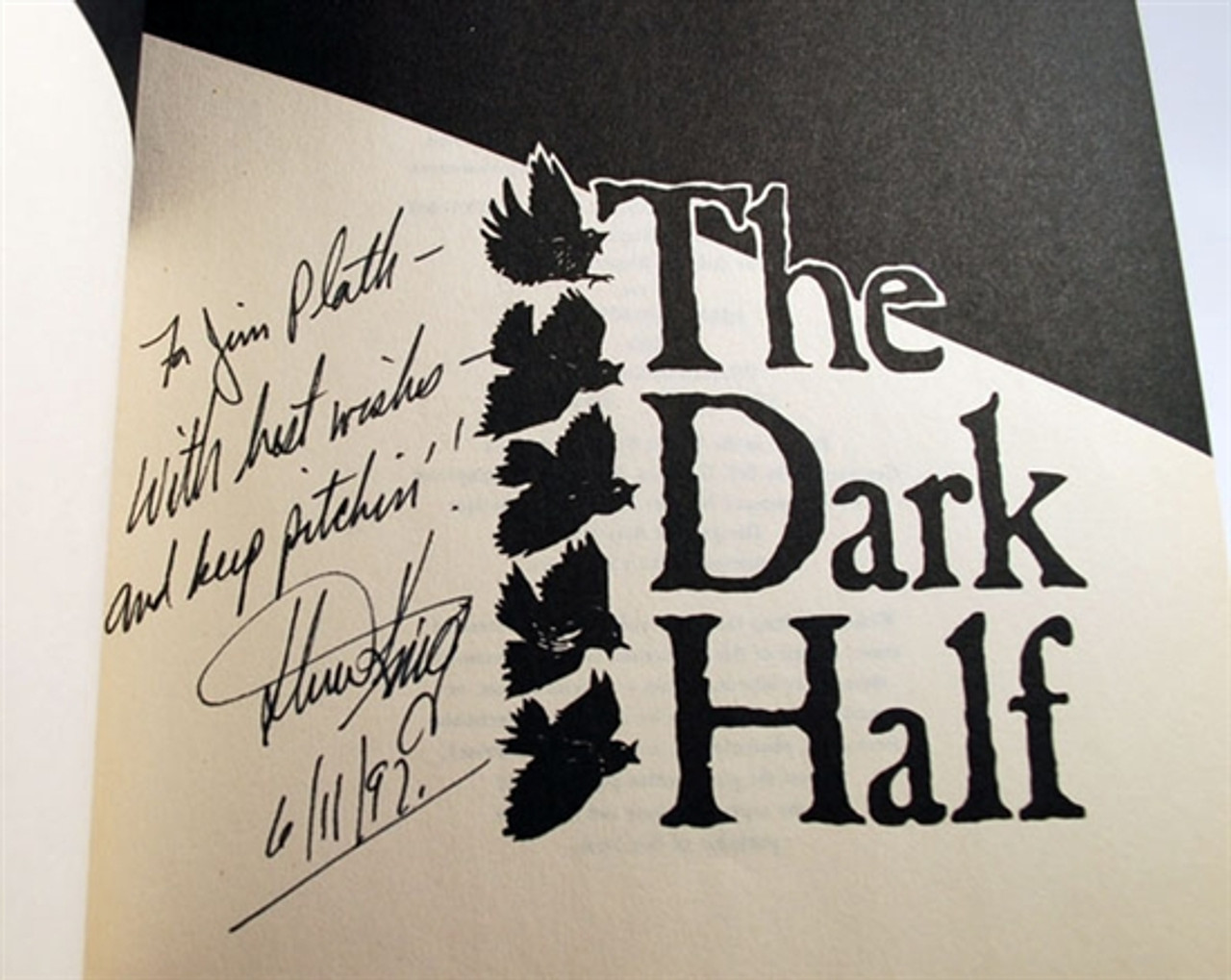 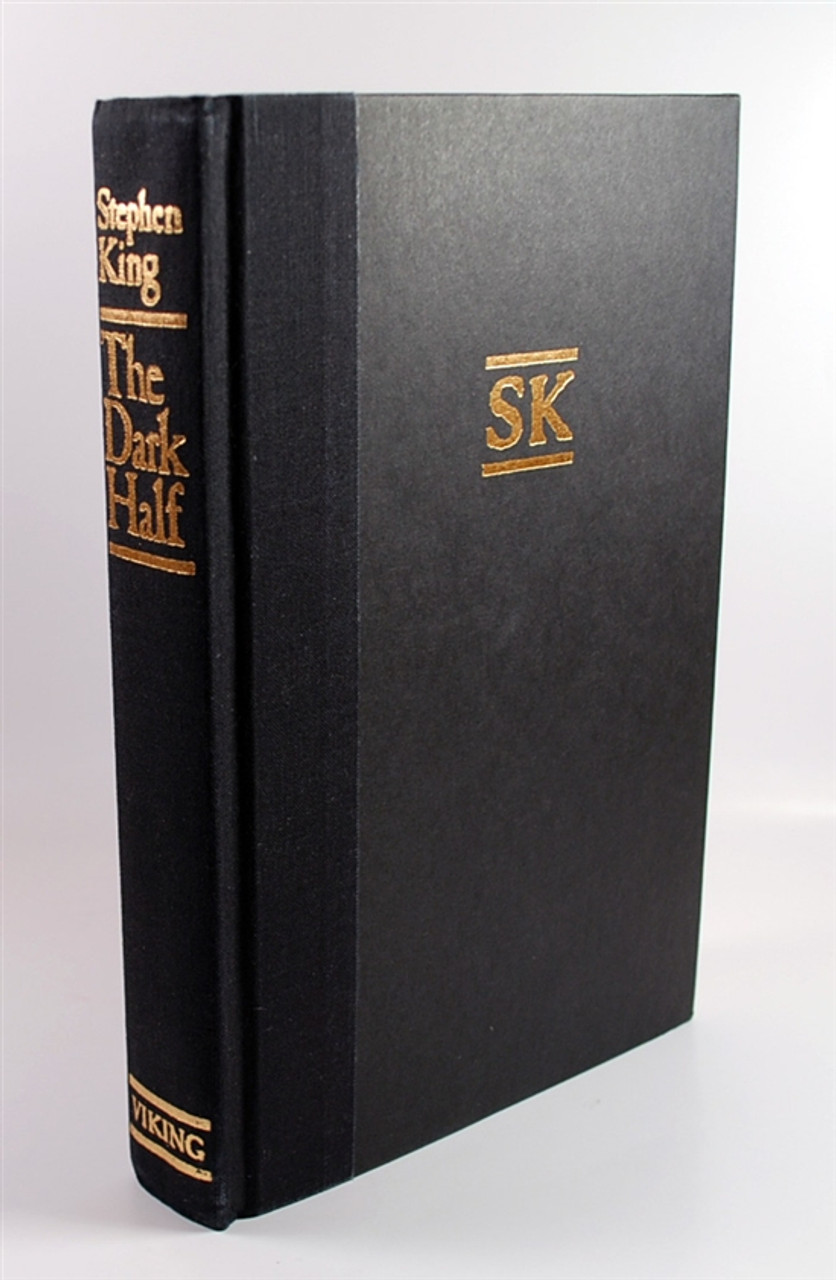 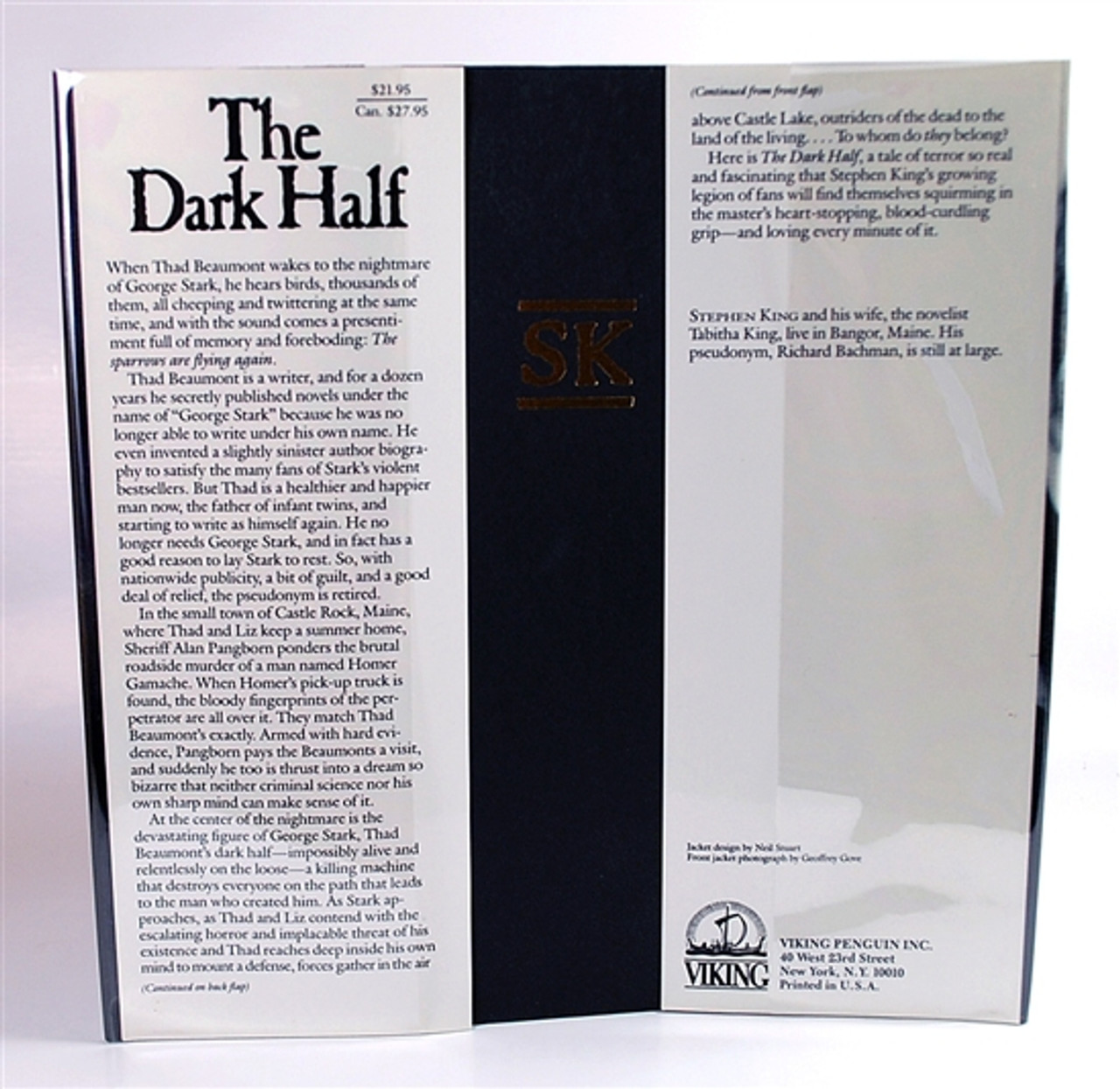 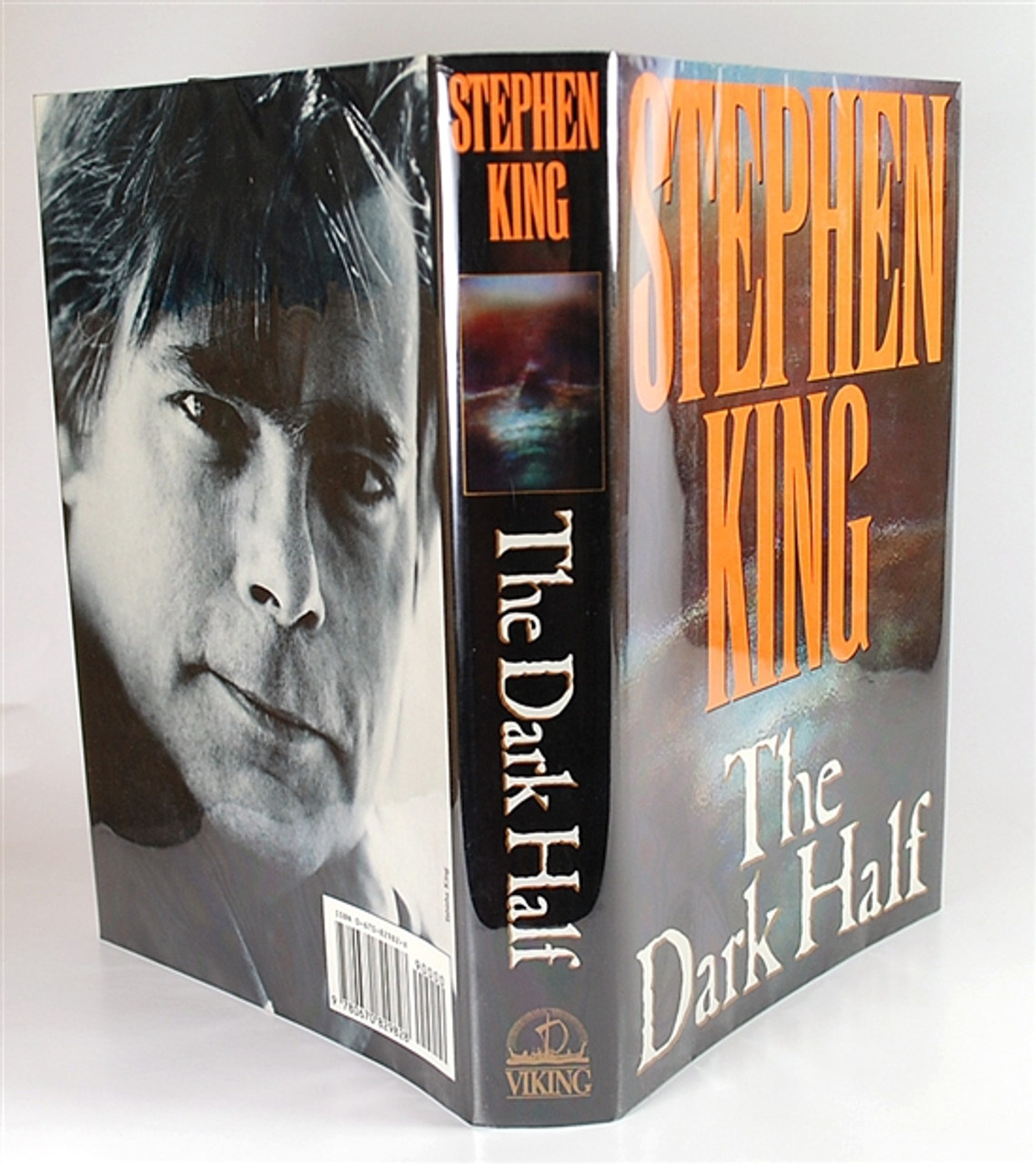 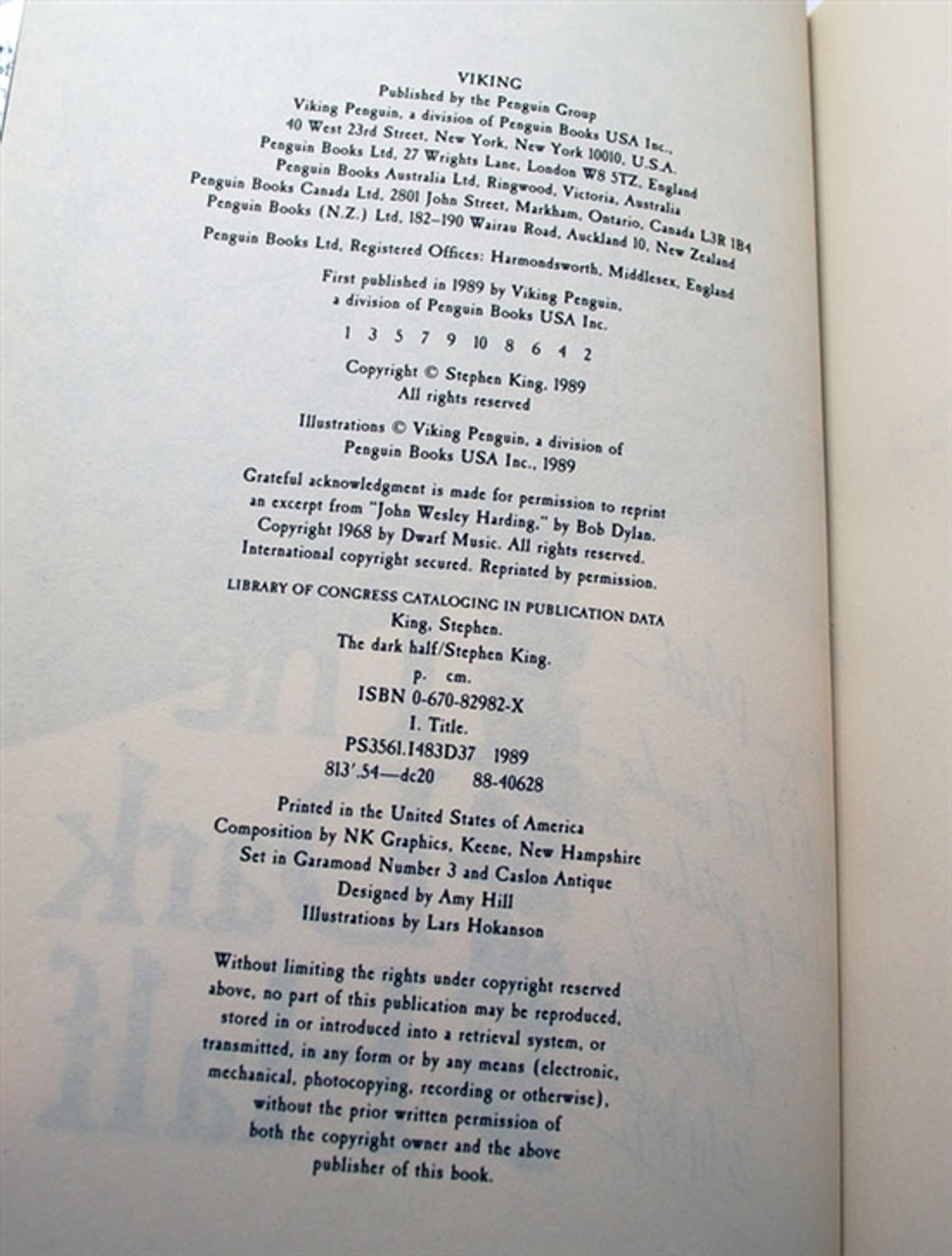 Signed and inscribed by Stephen King on the title page. A First Edition , First Printing of this title. An original and authentic high quality collectible book for your horror library. Viking Penguin. 1989, Stephen King, "The Dark Half", US First Edition/First Printing. dj/HC, Full number line as required: 1 3 5 7 9 10 8 6 4 2, "First published in 1989 by Viking Penguin.." on copyright page. 448 pps. $21.95 un-clipped dust-jacket. ISBN # 0-670-82982-X. Black boards. A Fine example of this original hardcover book. Autographed in black pen on the title page as follows: "For Jim Plath, With best wishes - and keep pitchin' ! Stephen King 6/11/92." Condition: Fine/Fine. A wonderful bright clean copy. Clean & straight boards. No markings, writings, or stampings. No attached bookplates or signs of any removed. Dust-jacket free of tears, creases, etc. A well-cared for book, protected from any potential damage. This book stands out as having had exemplary care. Square and tight spine. Excellent original example. Collector's grade hardcover book. Dust-jacket protected in brand new Mylar sleeve. Price un-clipped. Book Information In 1985, 39-year-old Stephen King announced in public that his pseudonymous alter ego, Richard Bachman, was dead. (Never mind that he revived him years later to write The Regulators.) At the beginning of The Dark Half (1989), 39-year-old writer Thad Beaumont announces in public that his own pseudonym, George Stark, is dead. Now, King didn't want to jettison the Bachman novel, titled Machine Dreams, that was he working on. So he incorporated it in The Dark Half as the crime oeuvre of George Stark, whose recurring hero/alter ego is an evil character named Alexis Machine. Thad Beaumont's pseudonym is not so docile as Stephen King's, though, and George Stark bursts forth into reality. At that point, two stories kick into gear: a mystery-detective story about the crime spree of George Stark (or is it Alexis Machine?) and a horror story about Beaumont's struggle to catch up with his doppelganger and kill him dead. This is not the first time that Stephen King has written a dark allegory about the fiction writer's situation. As the New York Times writes, "Misery (1987) is a parable in chiller form of the popular writer's relation to his audience, which holds him prisoner and dictates what he writes, on pain of death. The Dark Half is a parable in chiller form of the popular writer's relation to his creative genius, the vampire within him, the part of him that only awakes to raise Cain when he writes, the fratricidal twin who occupies 'the womblike dungeon' of his imagination." The computer game The Dark Half, based on the novel, was designed by Symtus and published by Capstone in 1992. Although highly sought after by classic computer game collectors, it is widely considered one of the worst graphic adventure games ever made
VERY FINE GUARANTEED