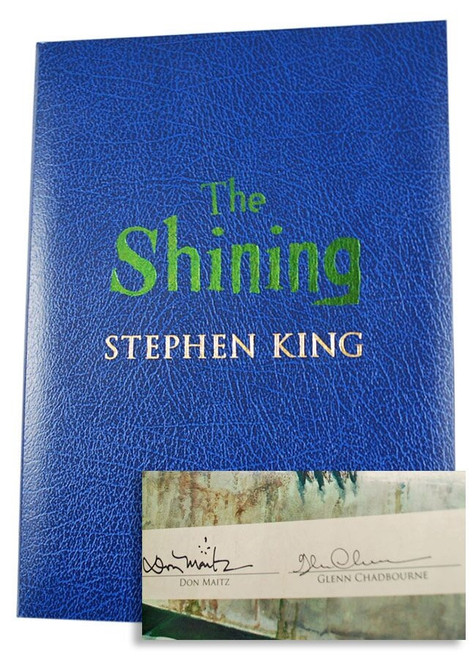 This item is Out of Print FROM THE PUBLISHER and will not be available for purchase again.

The Shining: The Deluxe Special Edition

A Collectible Limited ONE TIME PRINTING featuring an introduction by Stephen King, an afterword by Mick Garris, color paintings by Don Maitz, and our biggest special feature in any book we've published to date: "Before the Play," Stephen King's long lost 40 PAGE PROLOGUE to the novel, has been restored to its proper place at the beginning of the story!

The Shining: The Deluxe Special Edition (Volume Three in the "Doubleday Years" Collection) by Stephen King 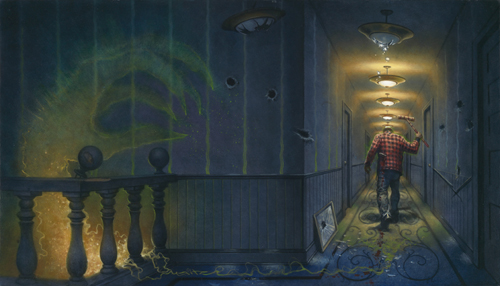 This is the very first edition of The Shining published anywhere in the world to include Stephen King's original, uncut 40 page prologue entitled "Before the Play" restored at its proper place at the beginning of the story. This may end up being the only edition to ever present the complete story of the Overlook Hotel as King originally wrote it. In addition, there will be a Deleted Material section, which contains HUNDREDS of sentences, paragraphs, and even scenes not included in the final book we all know and love. Of particular interest is a four page section toward the end known as "After the Play," which even Stephen King believed had been lost forever because he didn't have a copy in his archives!

The Overlook Hotel claimed the most beautiful physical setting of any resort in the world; but Jack Torrance, the new winter caretaker, with his wife Wendy and their five-year-old son Danny, saw much more than its splendor.

Jack saw the Overlook as an opportunity, a desperate way back from failure and despair; Wendy saw this lonely sanctuary as a frail chance to perserve their family; and Danny? Danny, who was blessed or cursed with a shining, precognitive gift, saw visions hideously beyond the comprehension of a small boy. He sensed the evil coiled within the Overlook's 110 empty rooms; an evil that was waiting just for them.

The Shining, by Stephen King, the undisputed master of the modern horror story.

• an introduction by Stephen King
• an afterword by Mick Garris
• the complete text of "Before the Play," Stephen King's 40 page prologue that has never appeared in any edition of The Shining, restored at the beginning of the book where King originally intended it to be published
• a Deleted Material section, which contains HUNDREDS of sentences, paragraphs, and even scenes not included in the final book we all know and love. Of particular interest is a four page section toward the end known as "After the Play," which even Stephen King believed had been lost forever because he didn't have a copy in his archives!
• an essay entitled, "The Shine Manuscript: An Early Draft of The Shining" by Jon Page, the collector who discovered all of the text we're including in the Deleted Material section
• deluxe oversized design (7 inches X 10 inches) featuring two color interior printing as part of the page design
• printed on a heavy interior specialty paper stock that is much thicker than the paper in a normal trade edition
• custom-made slipcase for the Gift Edition, custom-made traycase for the Numbered Artist Edition, and custom-made three piece traycase for the Deluxe Lettered Artist Edition
• epic wrap-around full color dust jacket artwork by Don Maitz • a different full color dust jacket for the Numbered Artist Edition painted by Don Maitz
• full color interior paintings by Don Maitz
• interior artwork will be printed on a heavy glossy stock and tipped into the book
• special limitation page artwork for all three editions by Glenn Chadbourne
• high-quality endpapers and fine bindings
• extremely collectible print run that is a tiny fraction of the TENS OF MILLIONS of copies of this novel you've seen in bookstores over the years!

Over a thirty year career, Don Maitz has produced imaginative paintings that have amazed a worldwide audience. The iconic pirate character he created for Captain Morgan Spiced Rum is his most widely recognized work. Maitz has illustrated books by Isaac Asimov, Ray Bradbury, C. J. Cherryh, Raymond Feist, Alan Dean Foster, Stephen King, Michael Moorcock, and occasionally, his wife artist and author, Janny Wurts. His amazing artwork can be found on book covers, in art book collections, in and on magazines and gracing licensed products. Original art can be found hanging at museums and within private collections.

VERY FINE GUARANTEED. As New without any discernible flaws. A Very Fine book in a Very Fine tray-case. Sharp corners. The condition is of the highest quality. Unread book with square and tight spine.