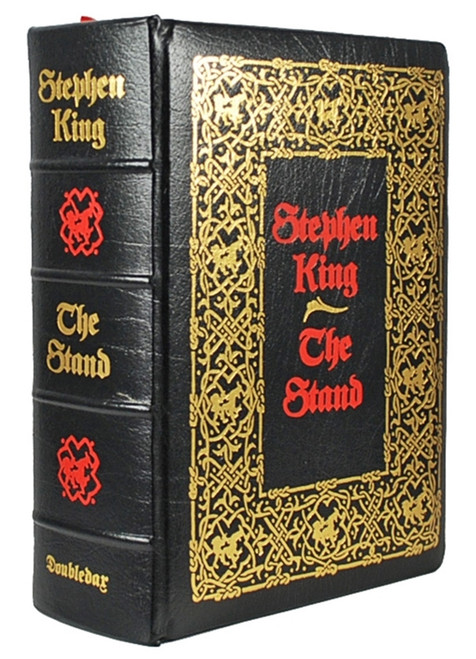 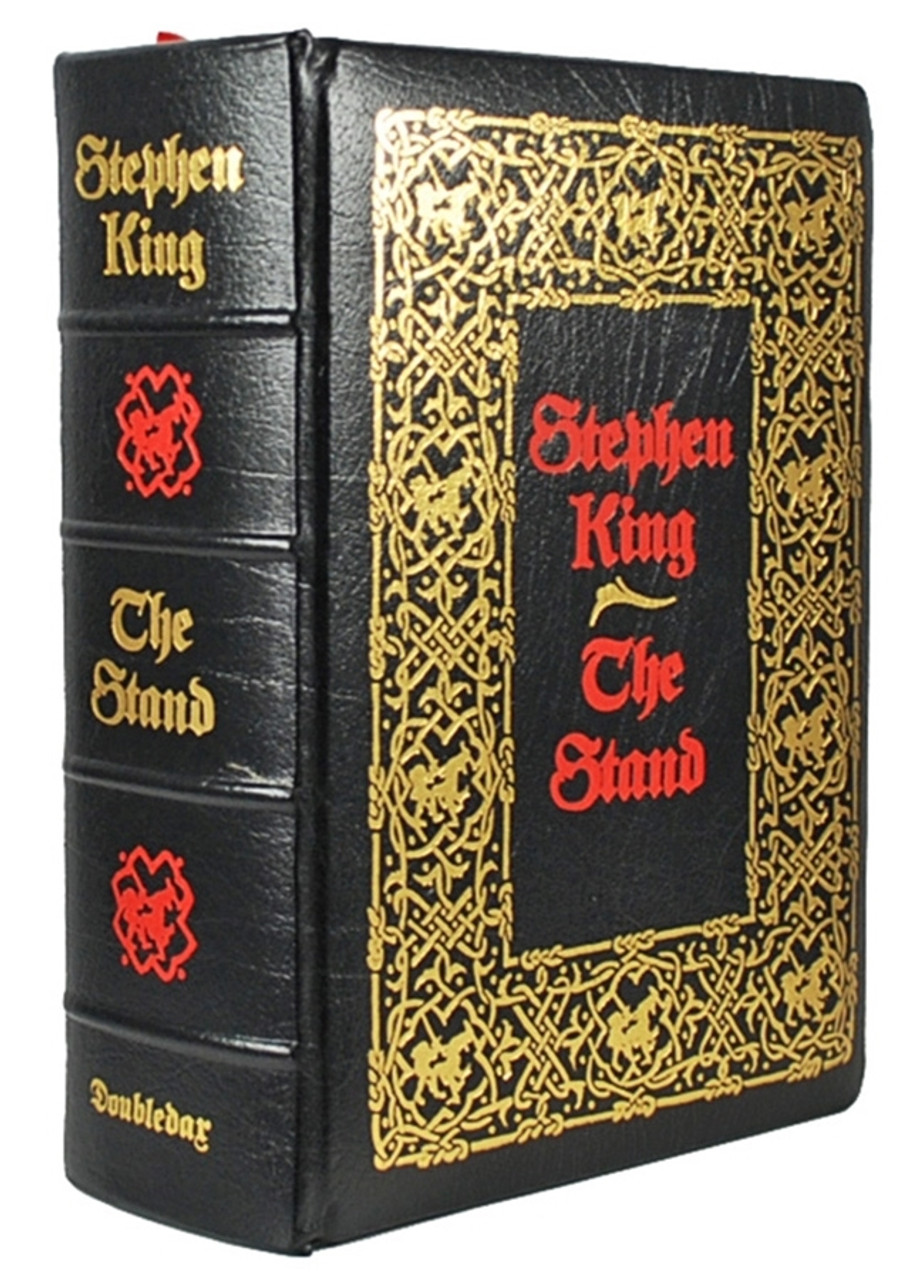 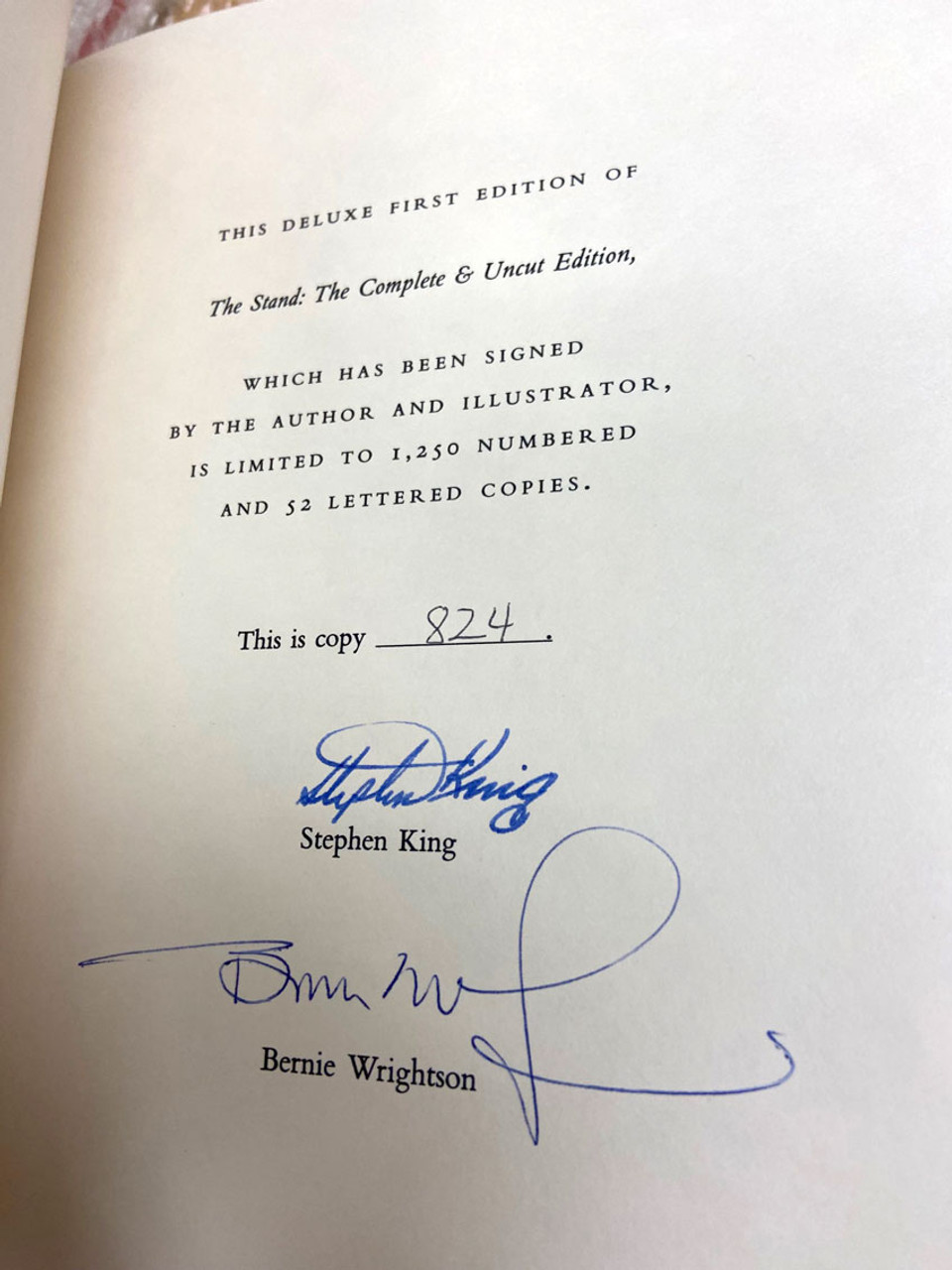 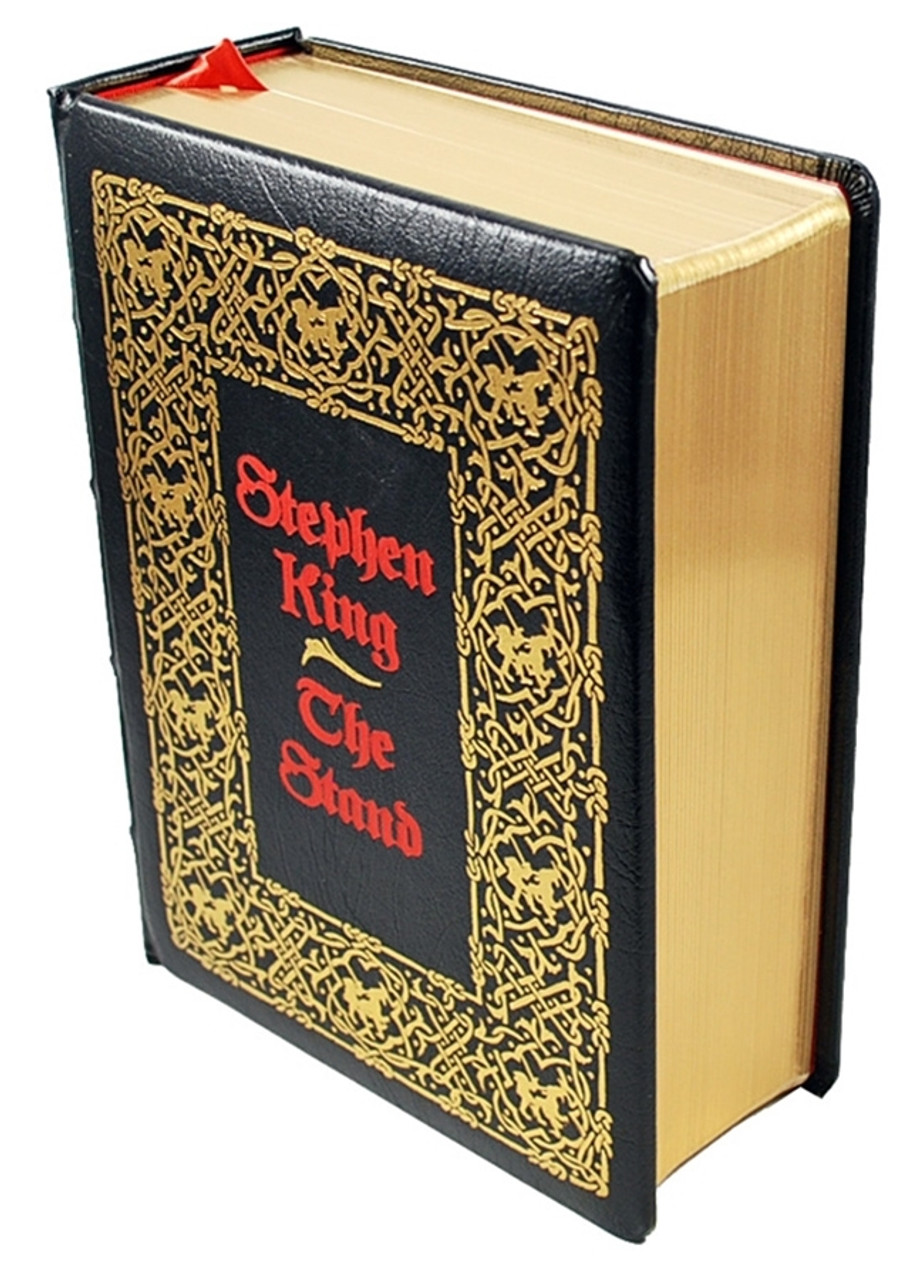 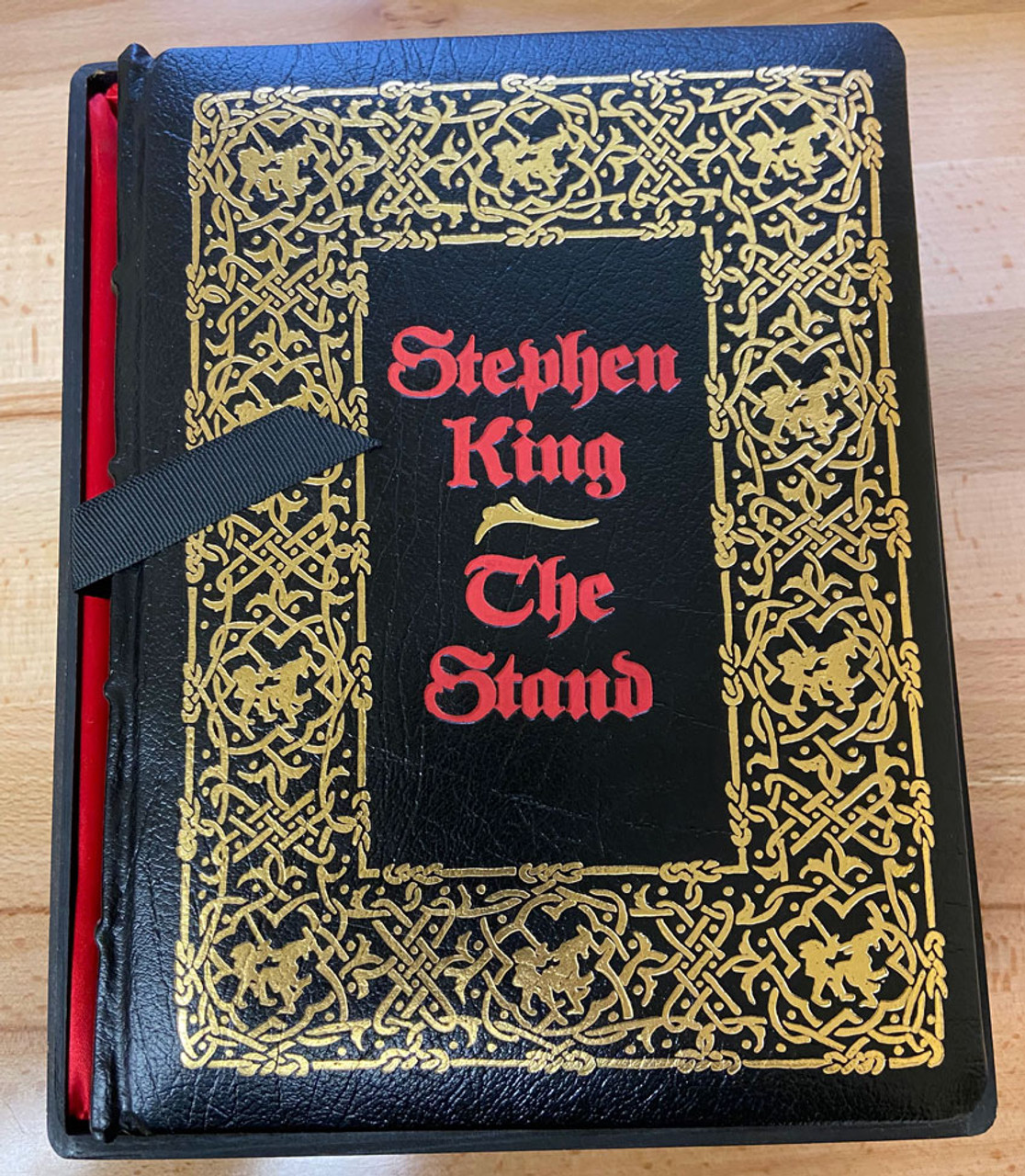 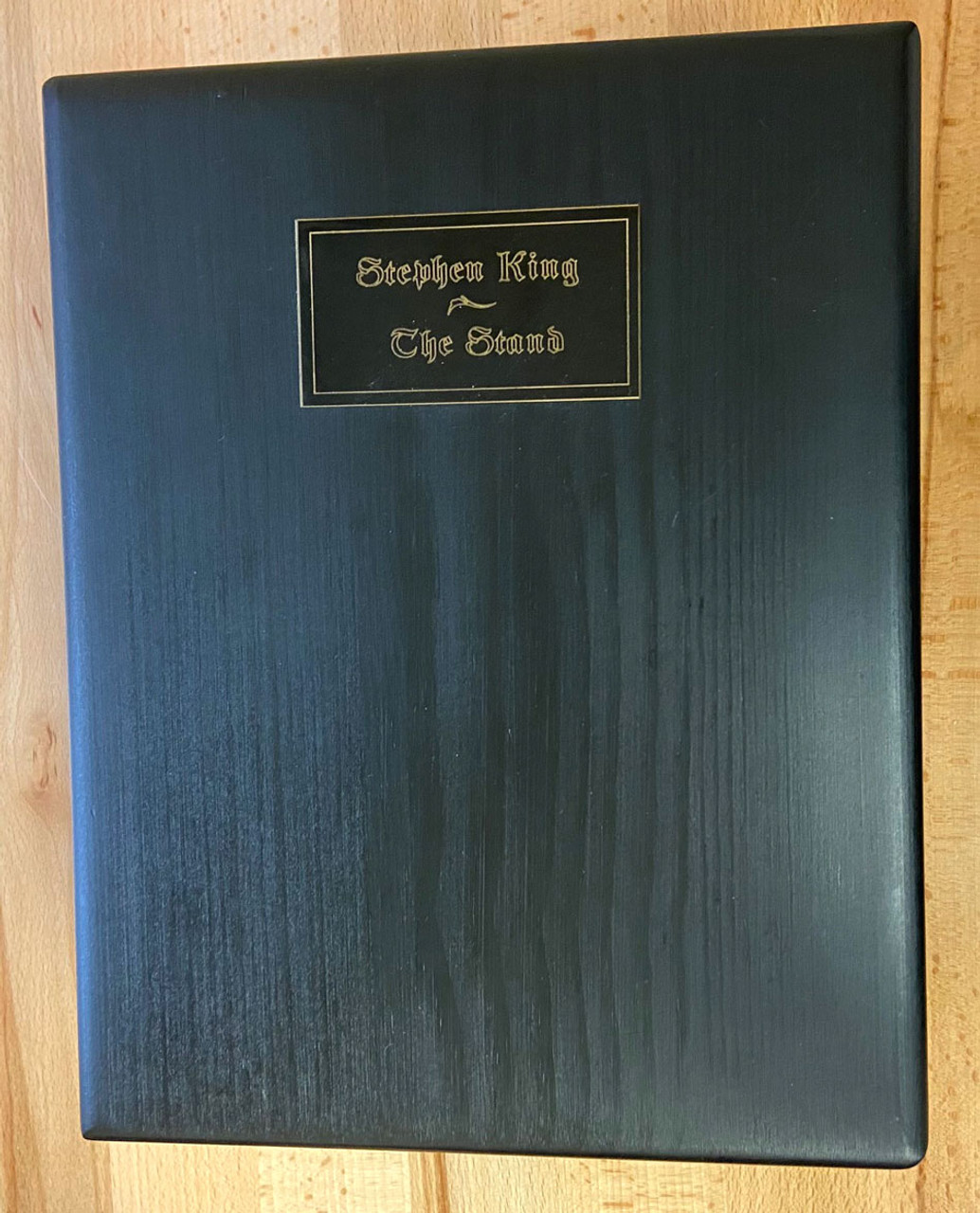 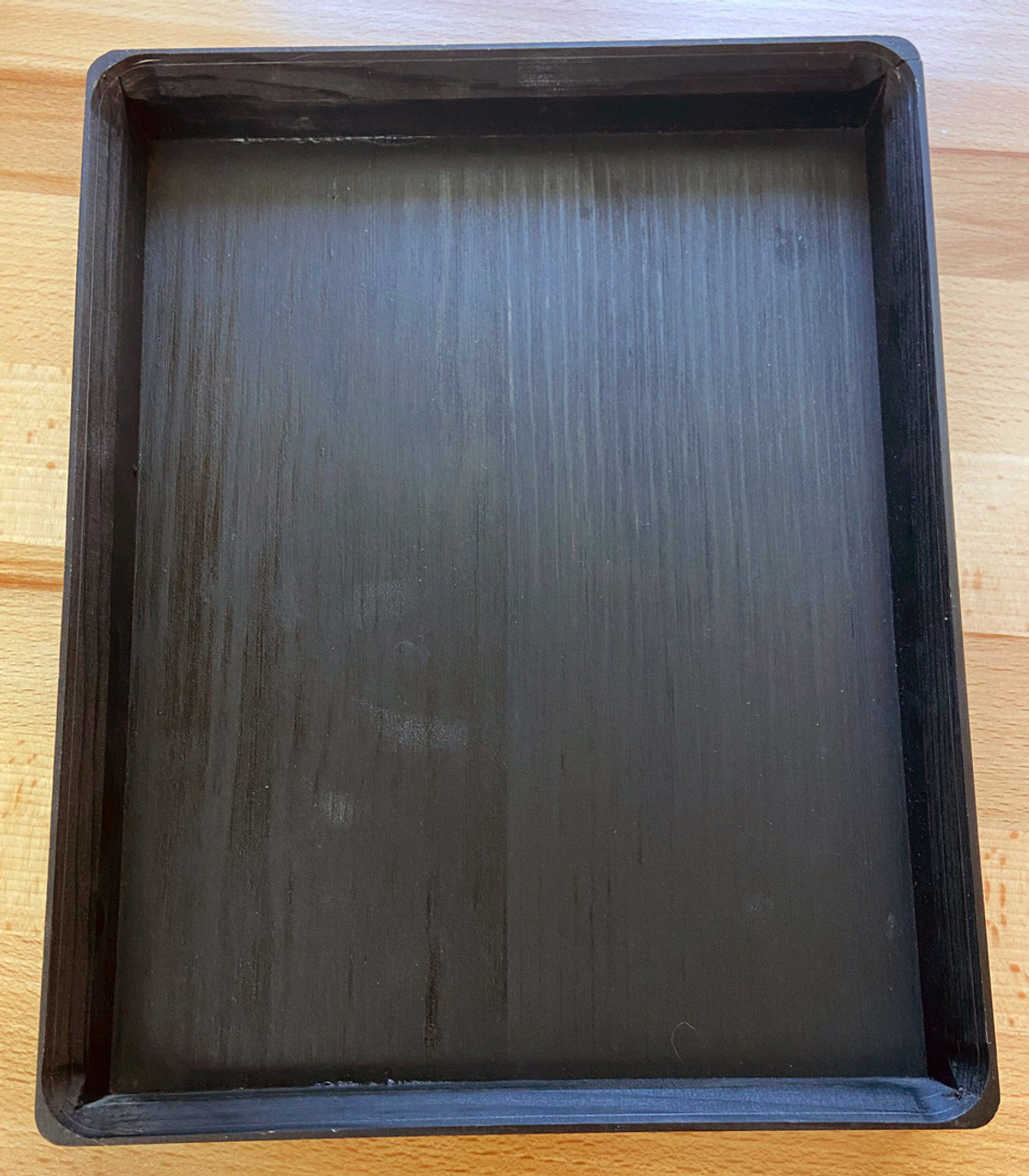 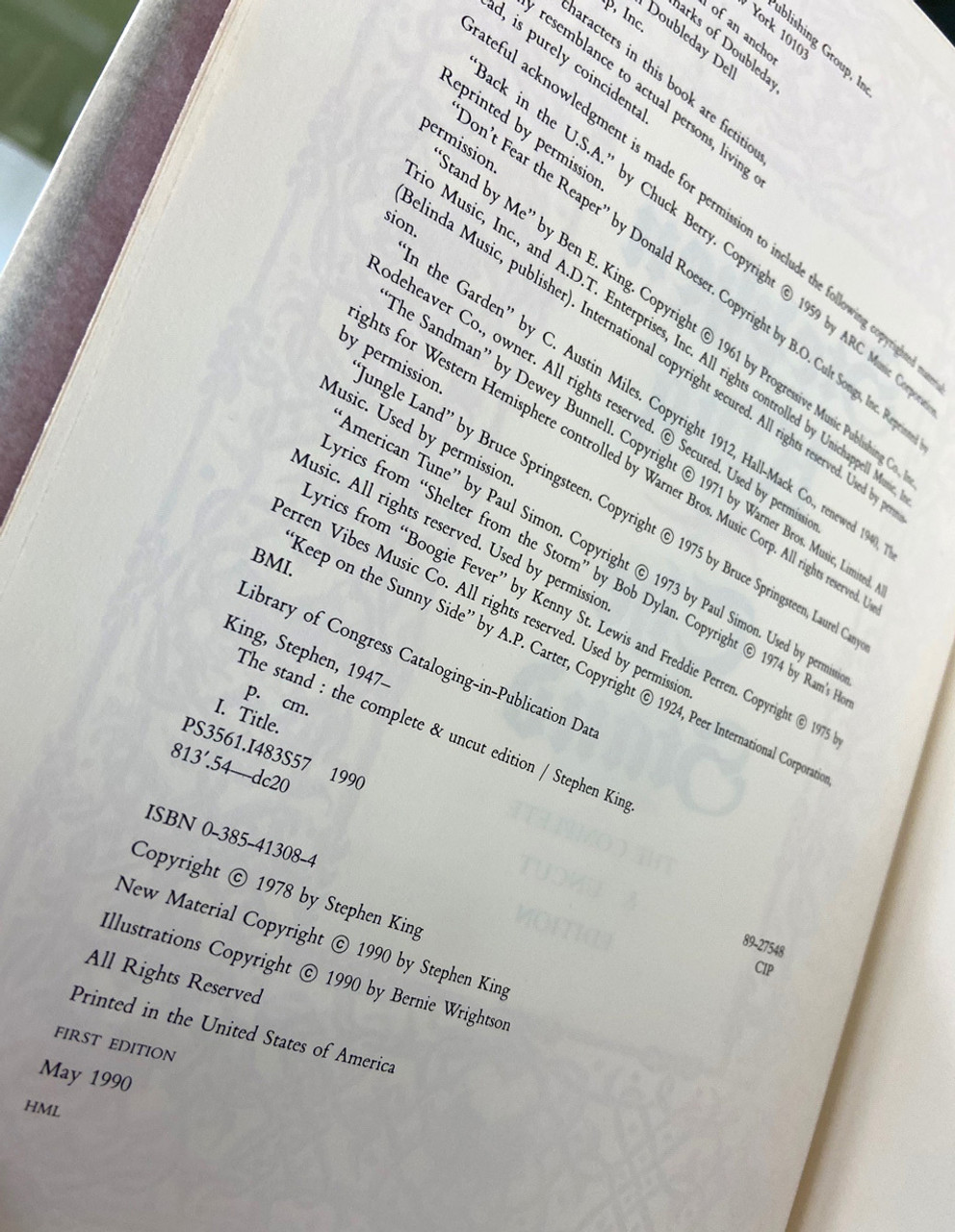 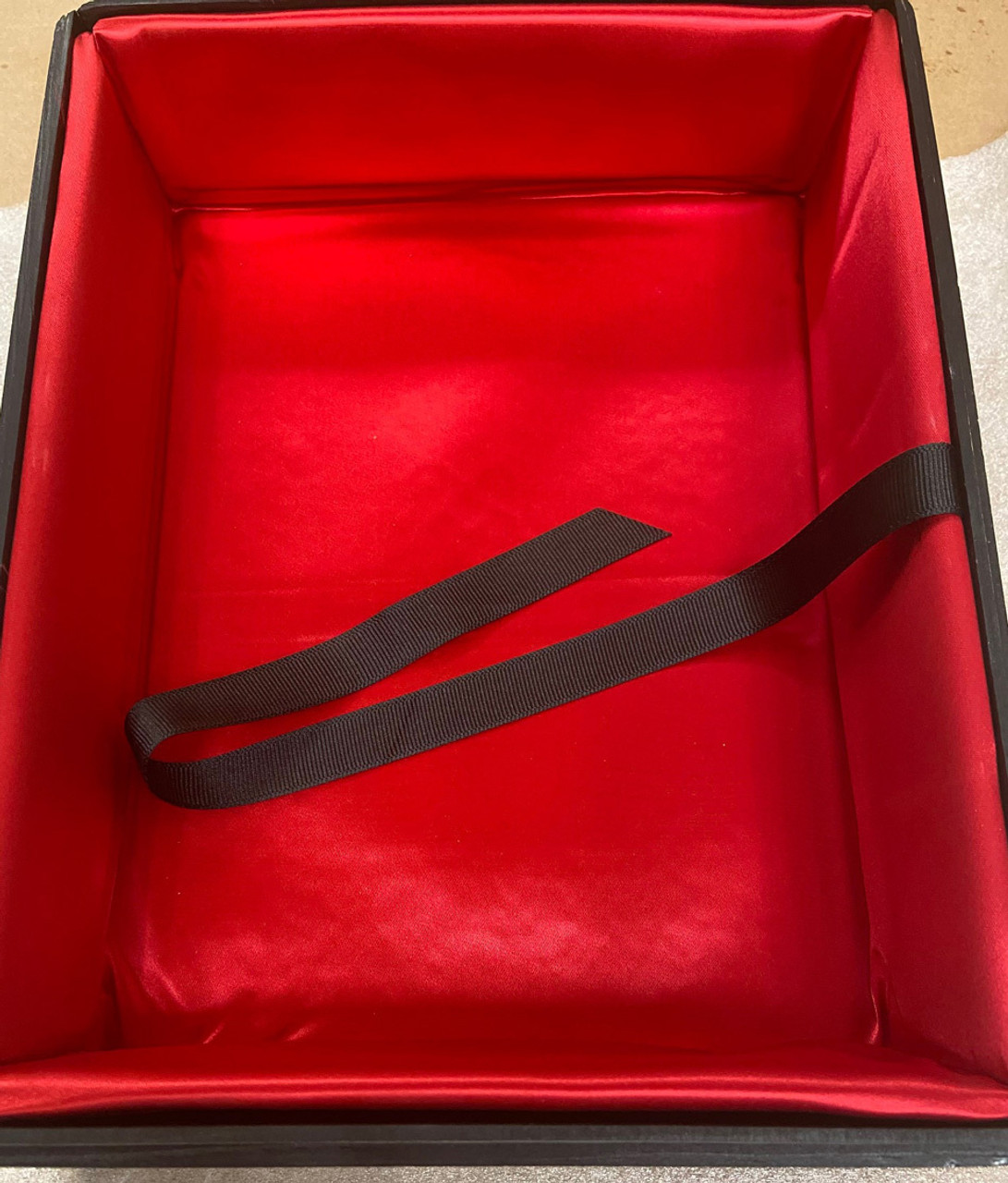 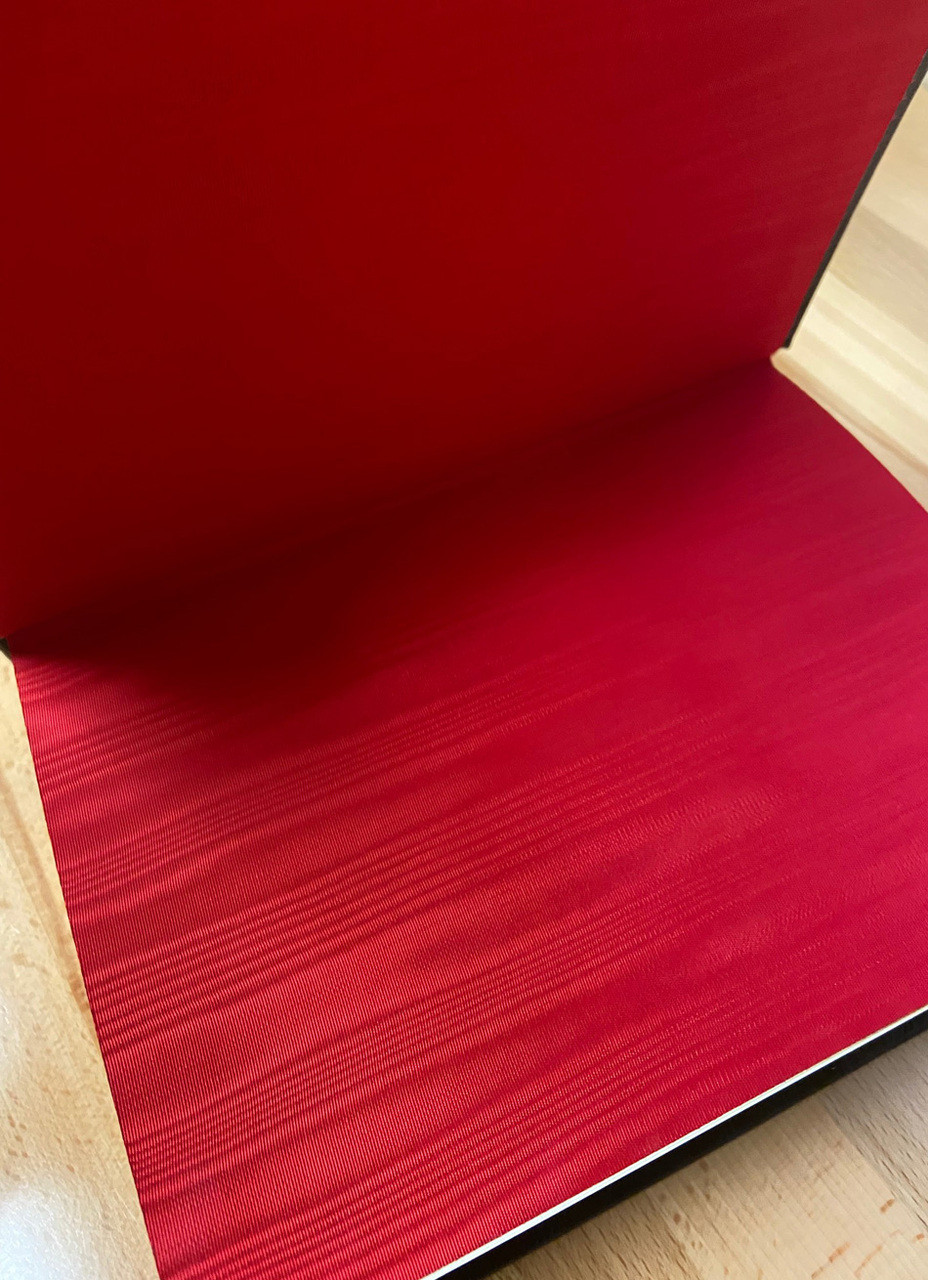 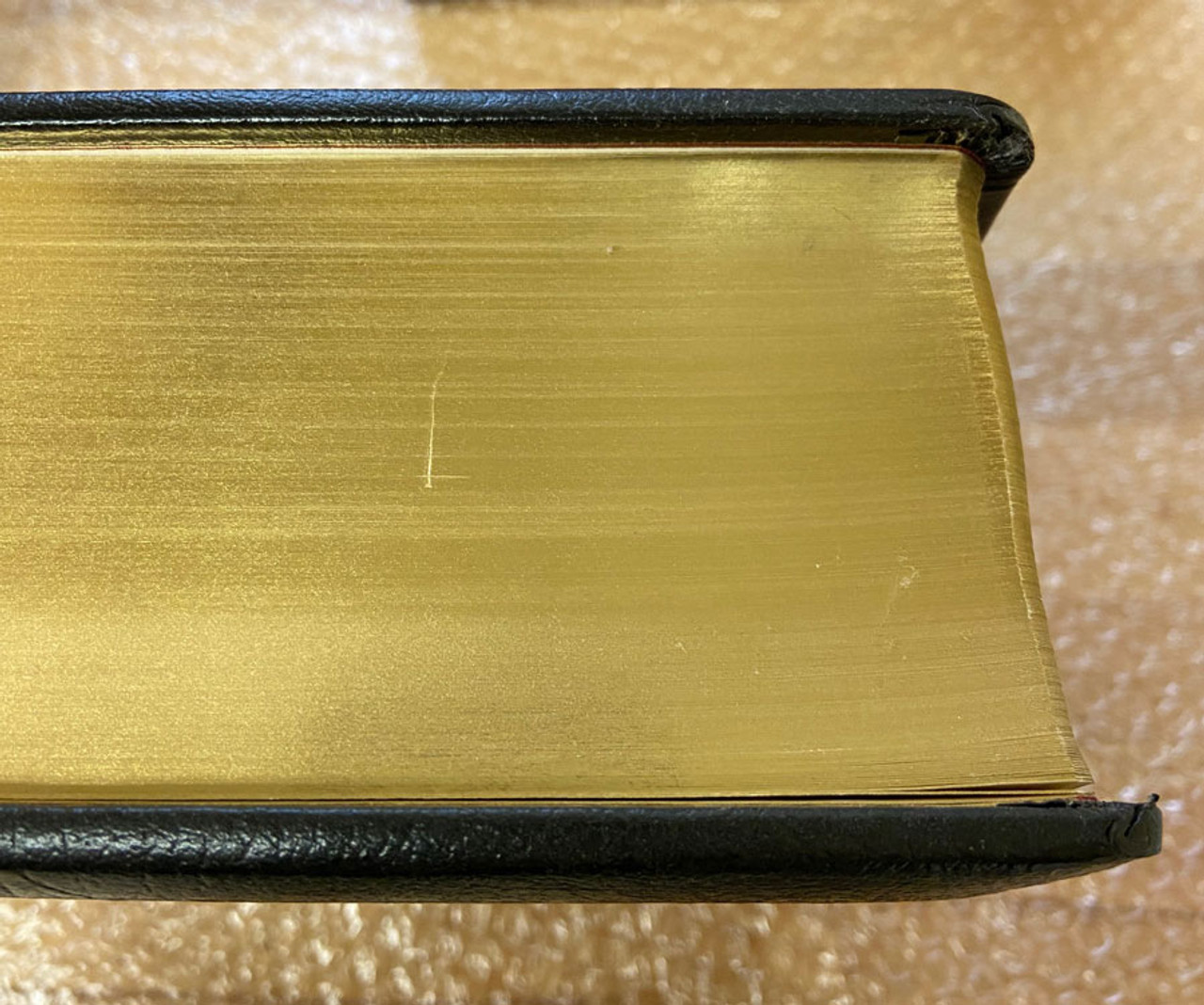 Personally signed by Stephen King and the illustrator Bernie Wrightson

The "Top of the Line" in Stephen King Signed Limited Edition Books.

This volume is considered by many to be the most elegant and luxurious Stephen King leather bound collector's edition.

Doubleday 1990. Stephen King, "The Stand: The Complete and Uncut Edition". Signed Deluxe Edition, 12" - 9 1/2". Bound in full genuine leather, all edges gilt, red silk moire endpapers and housed in a red cloth-lined wooden box with lid with a black plate on the lid with brass lettering. Illustrations by Bernie Wrightson. Signed on a special limitation page. First edition thus, this book is one of only 1,250 copies published. This is number 824.

One of most desirable signed limited editions from the Master of Modern Horror. Stephen King's most popular book, according to polls of his fans. A masterpiece - the apocalyptic confrontation between Good and Evil. Regarded by many as King's greatest early novel. A beautiful leather bound production. Includes the original "glassine" dust-jacket from Doubleday.

"THIS DELUXE FIRST EDITION OF
The Stand: The Complete & Uncut Edition,

WHICH HAS BEEN SIGNED
BY THE AUTHOR AND ILLUSTRATOR,
IS LIMITED TO 1,250 NUMBERED
AND 52 LETTERED COPIES. 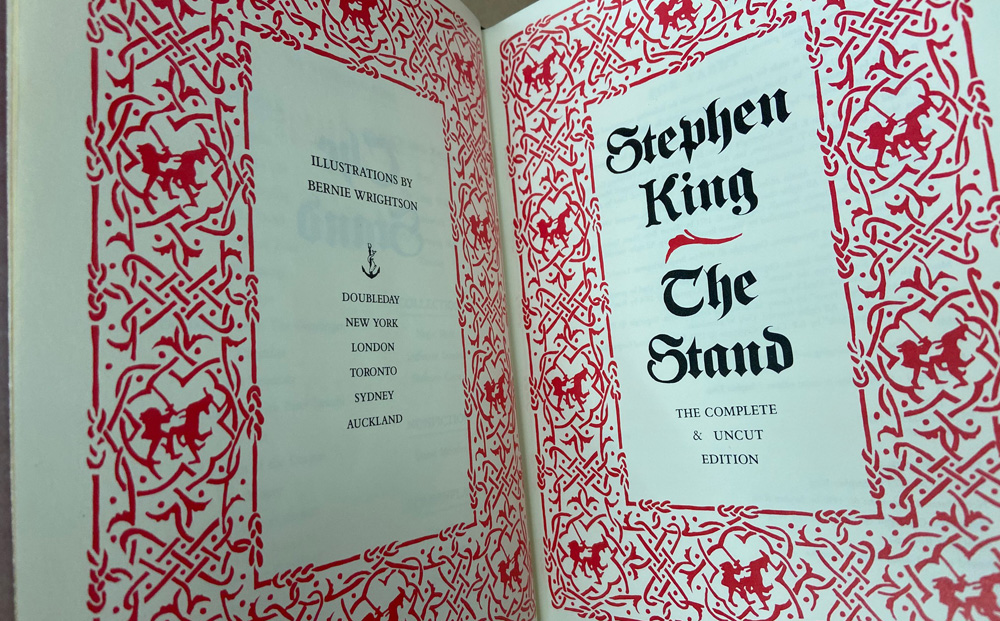 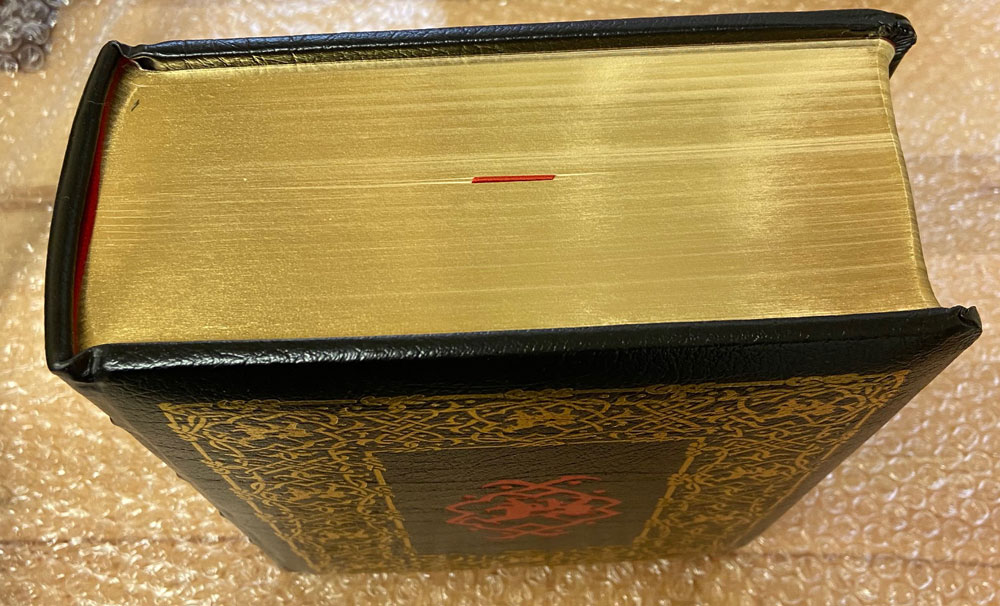 This is the way the world ends: with a nanosecond of computer error in a Defense Department laboratory and a million casual contacts that form the links in a chain letter of death.

And here is the bleak new world of the day after: a world stripped of its institutions and emptied of 99 percent of its people. A world in which a handful of panicky survivors choose sides -- or are chosen. A world in which good rides on the frail shoulders of the 108-year-old Mother Abigail -- and the worst nightmares of evil are embodied in a man with a lethal smile and unspeakable powers: Randall Flagg, the dark man.

In 1978 Stephen King published The Stand, the novel that is now considered to be one of his finest works. But as it was first published, The Stand was incomplete, since more than 150,000 words had been cut from the original manuscript.

Now Stephen King's apocalyptic vision of a world blasted by plague and embroiled in an elemental struggle between good and evil has been restored to its entirety. The Stand: The Complete And Uncut Edition includes more than five hundred pages of material previously deleted, along with new material that King added as he reworked the manuscript for a new generation. It gives us new characters and endows familiar ones with new depths. It has a new beginning and a new ending. What emerges is a gripping work with the scope and moral complexity of a true epic.

or hundreds of thousands of fans who read The Stand in its original version and wanted more, this new edition is Stephen King's gift. And those who are reading The Stand for the first time will discover a triumphant and eerily plausible work of the imagination that takes on the issues that will determine our survival. 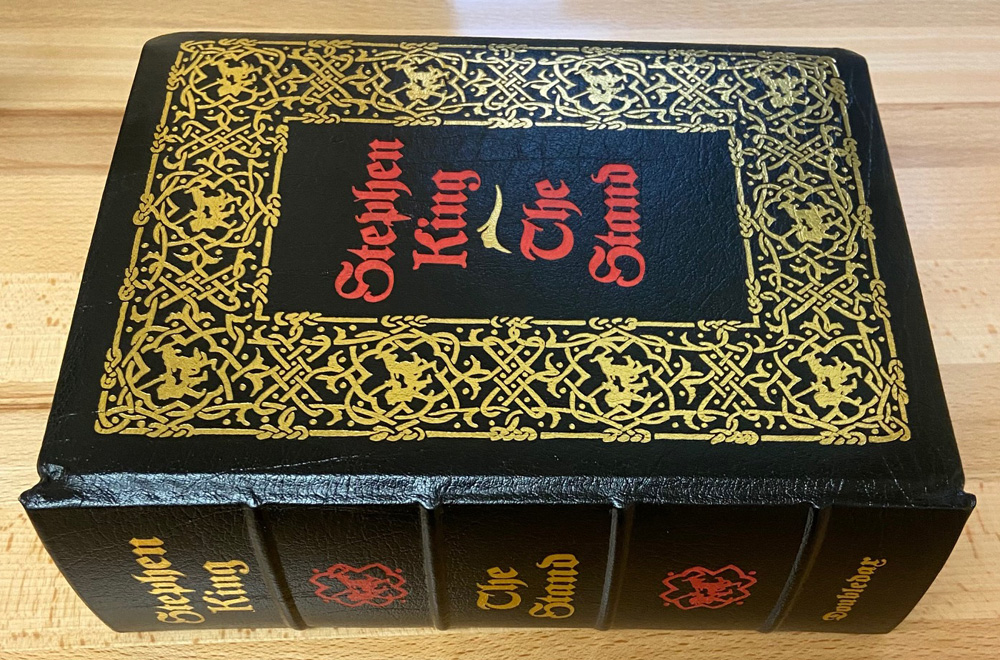 Near Fine+ with a single scratch to the gilded page edges as shown in the last photo. Otherwise a new book , unread with a square and tight spine. Free of writing or stamps and no attached bookplates. No other marks, scratches or blemishes to the gilded page edges. The wooden lid and box are in Near Fine+ condition with some light scratches. Nameplate is shiny and clear without any scratches. All photos of actual item.