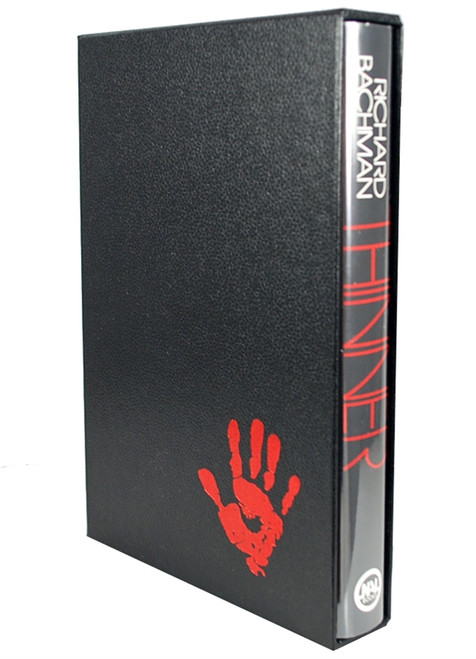 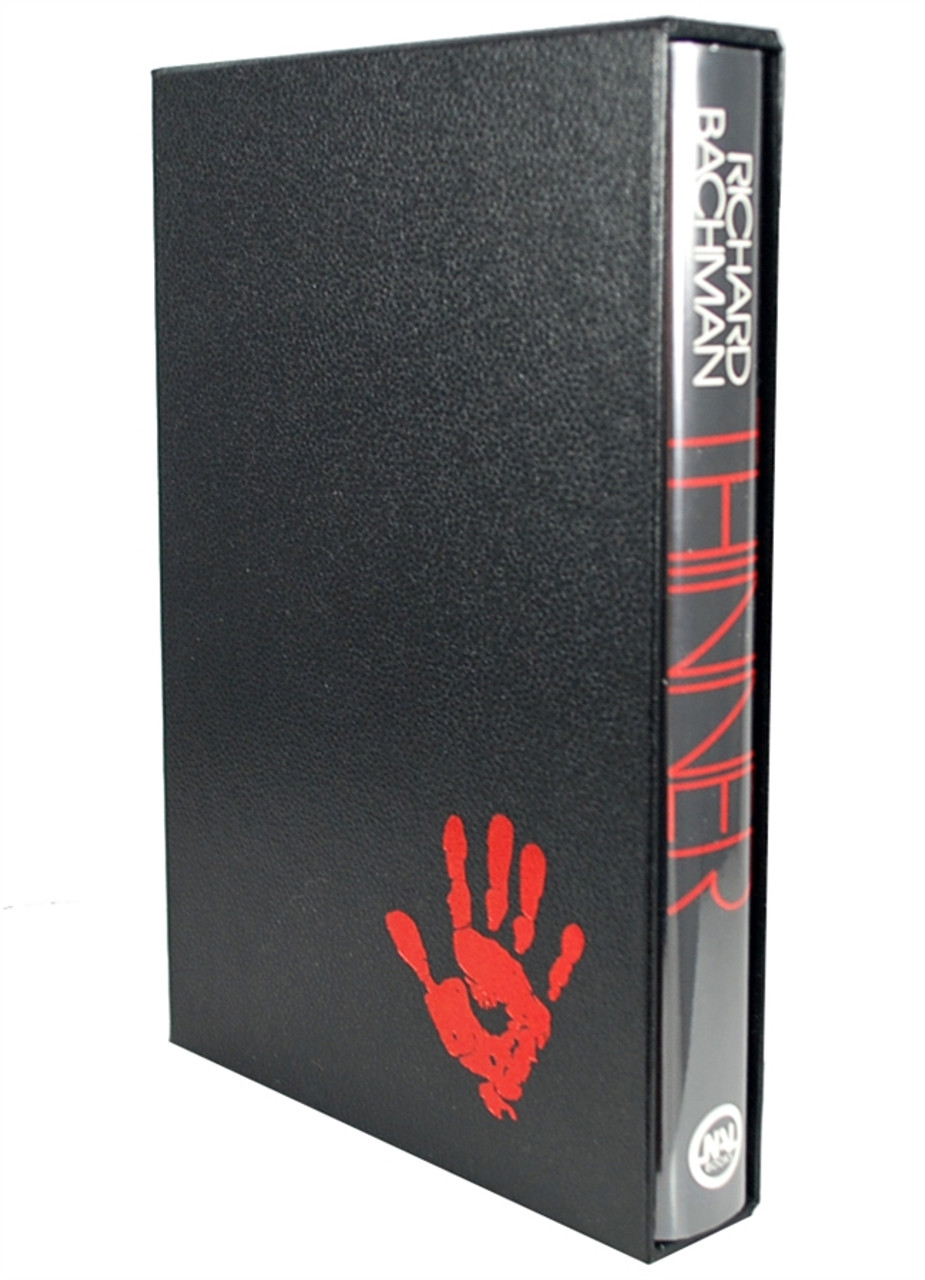 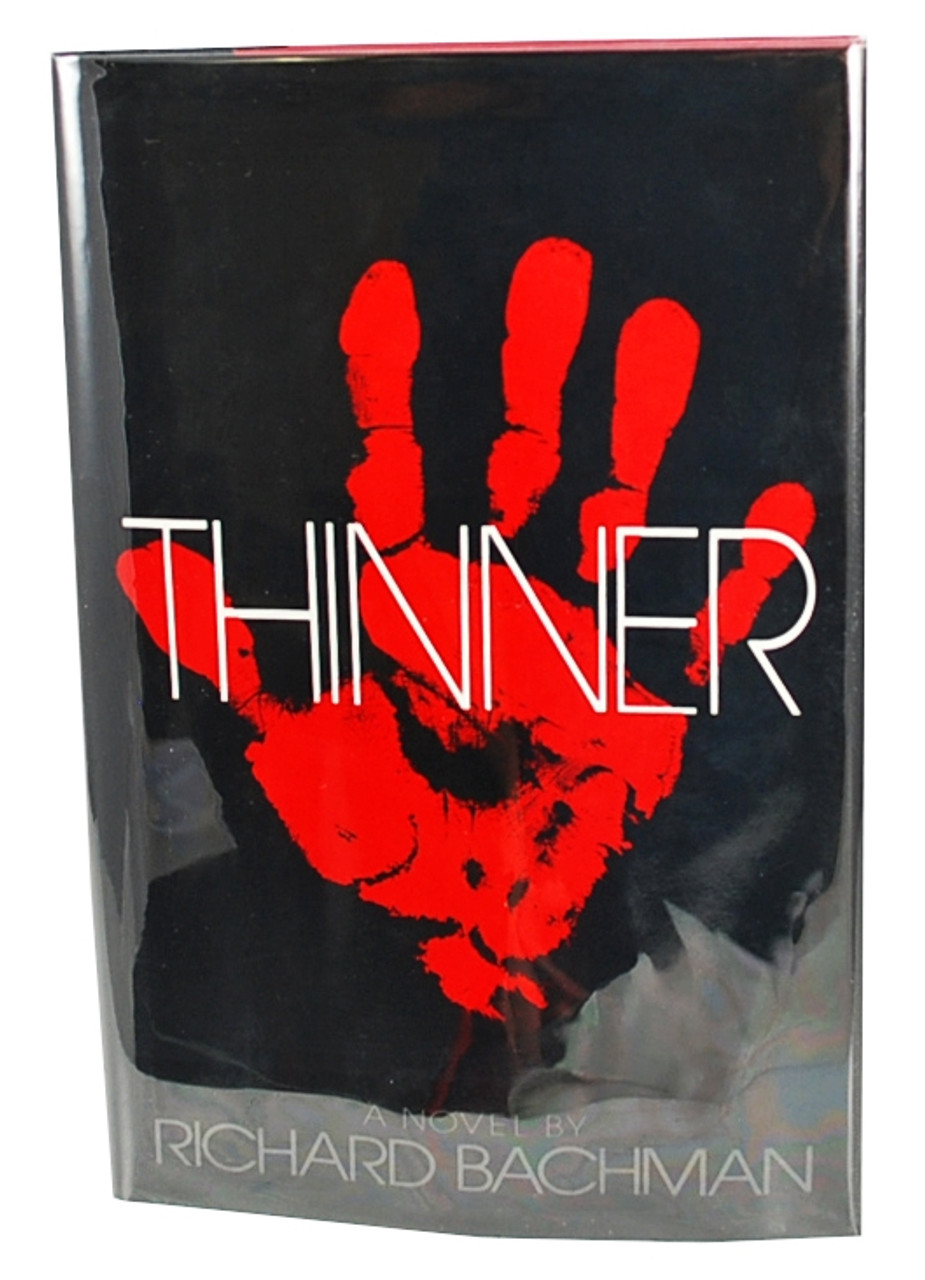 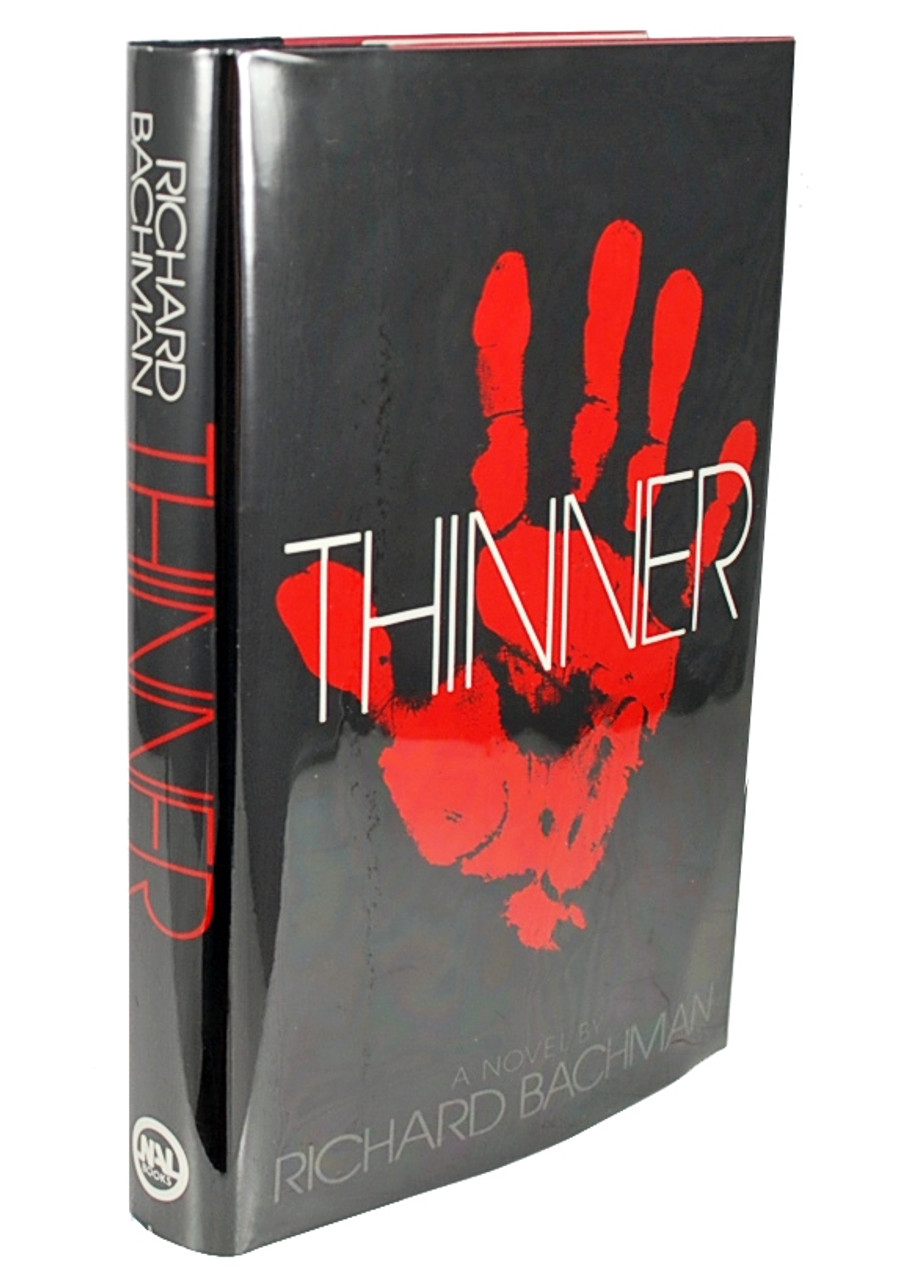 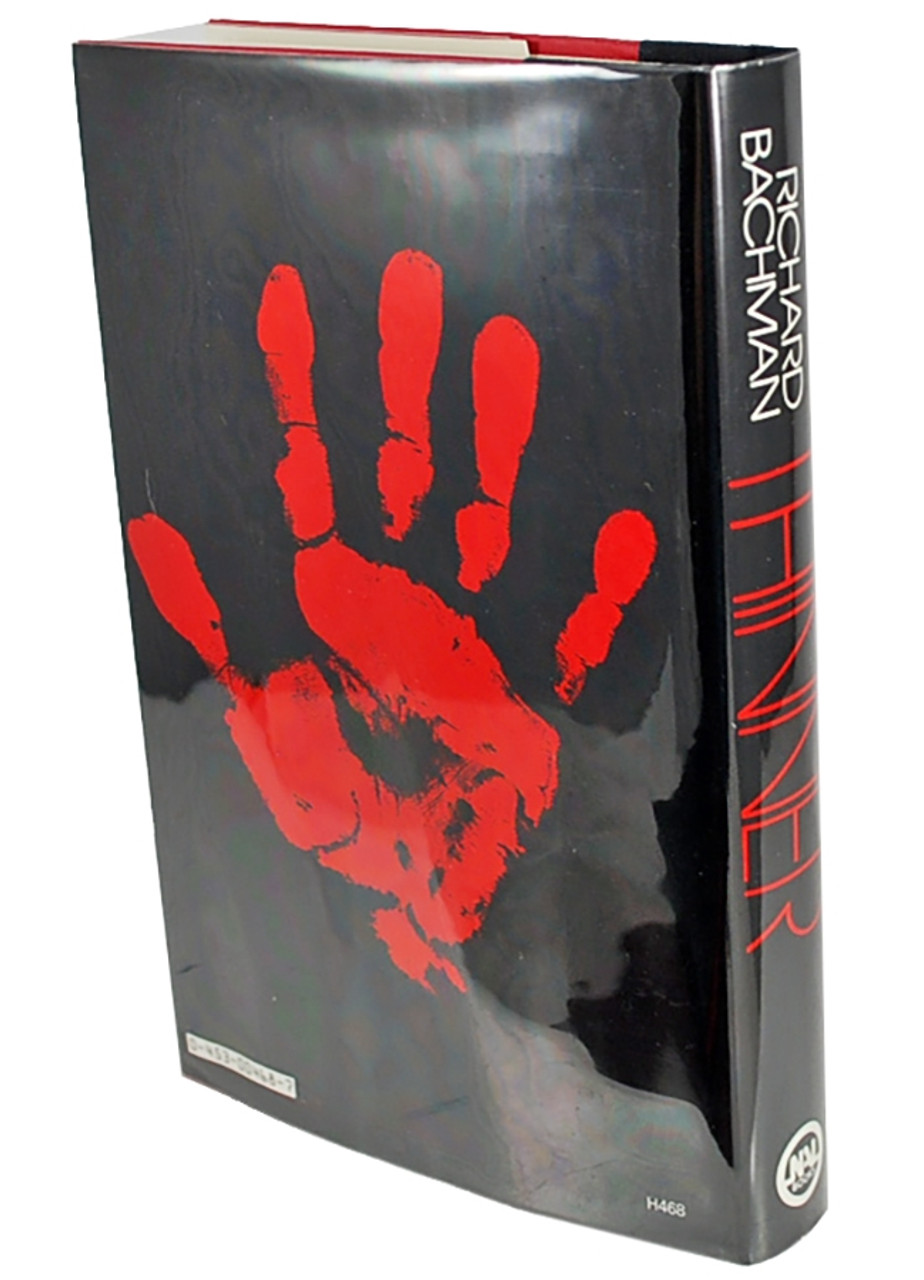 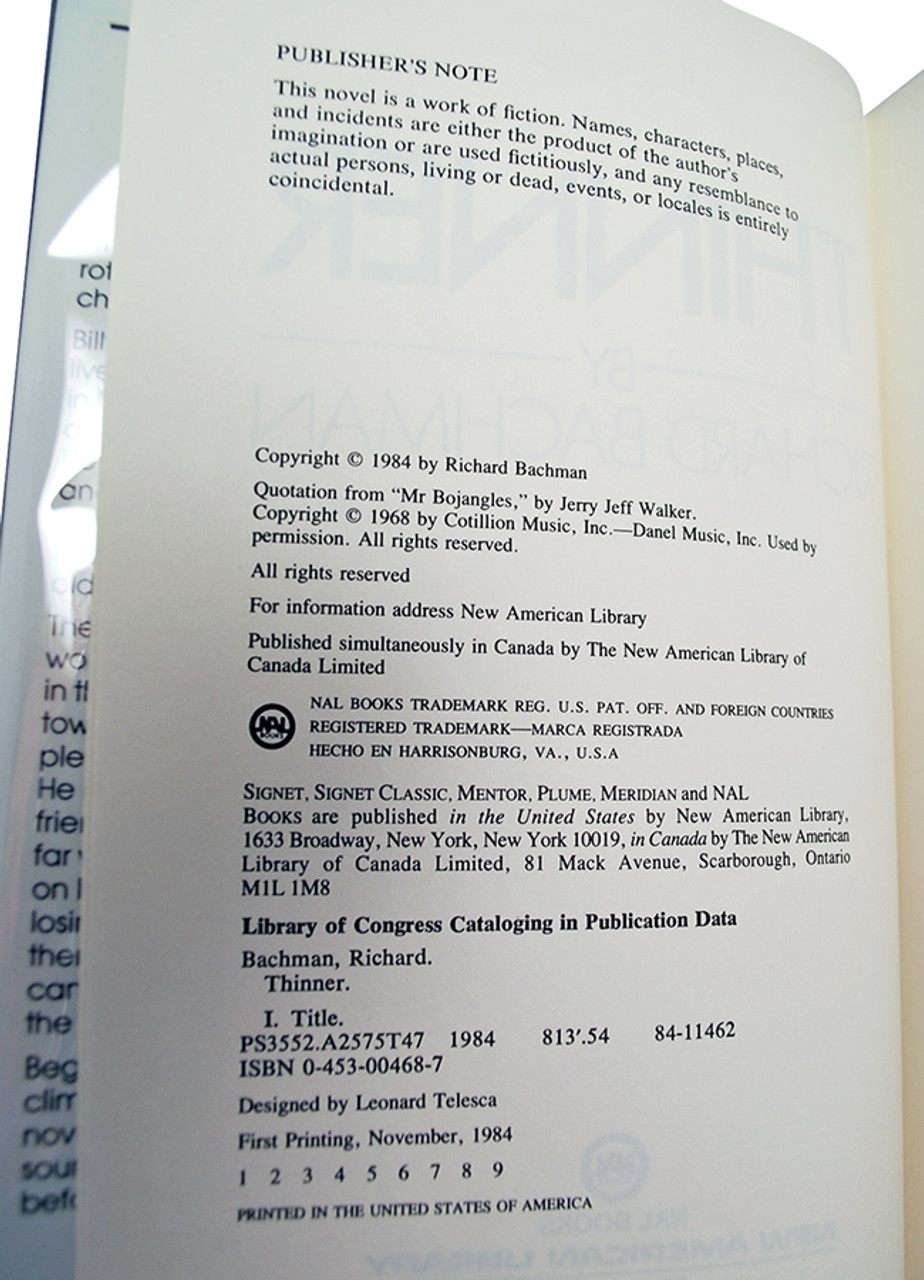 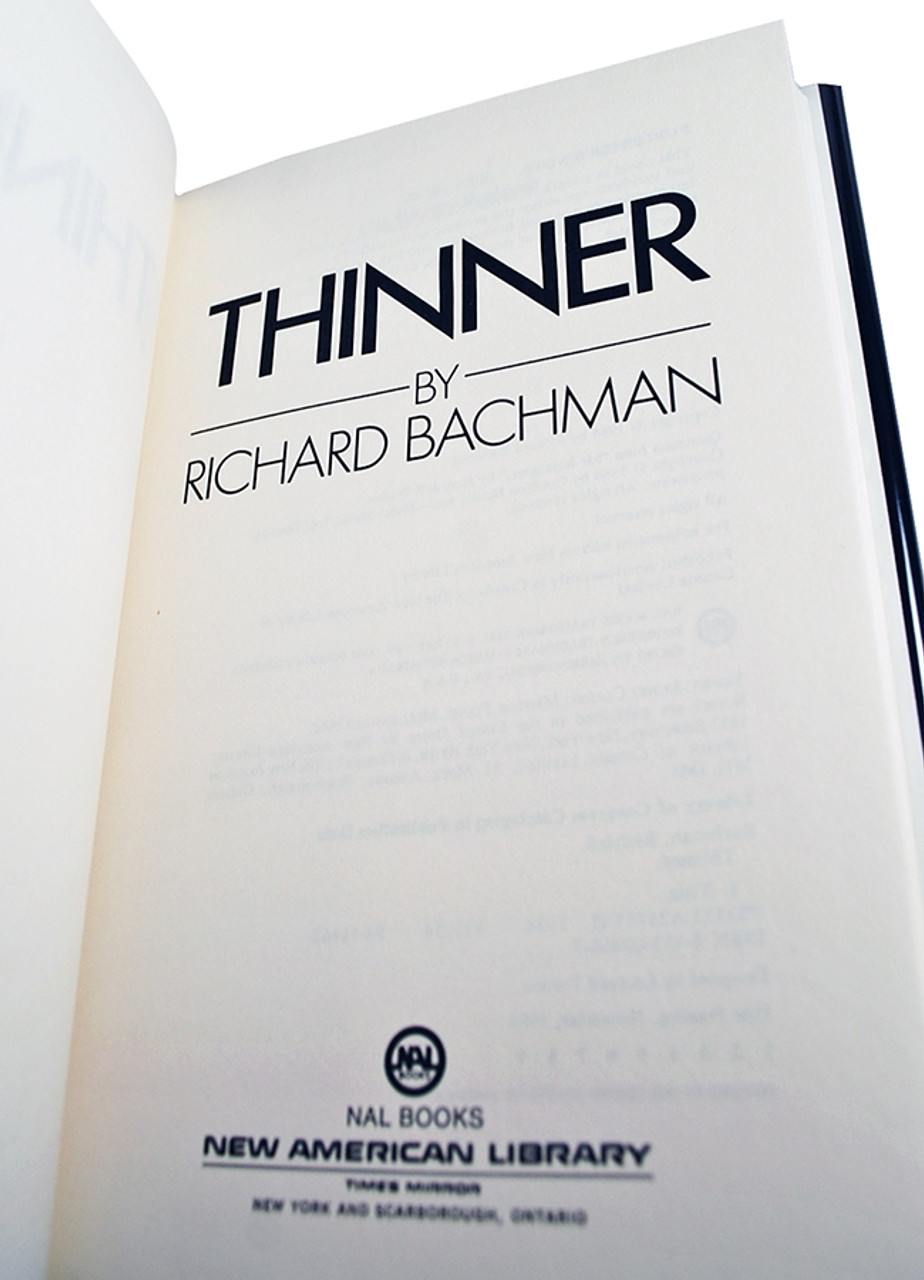 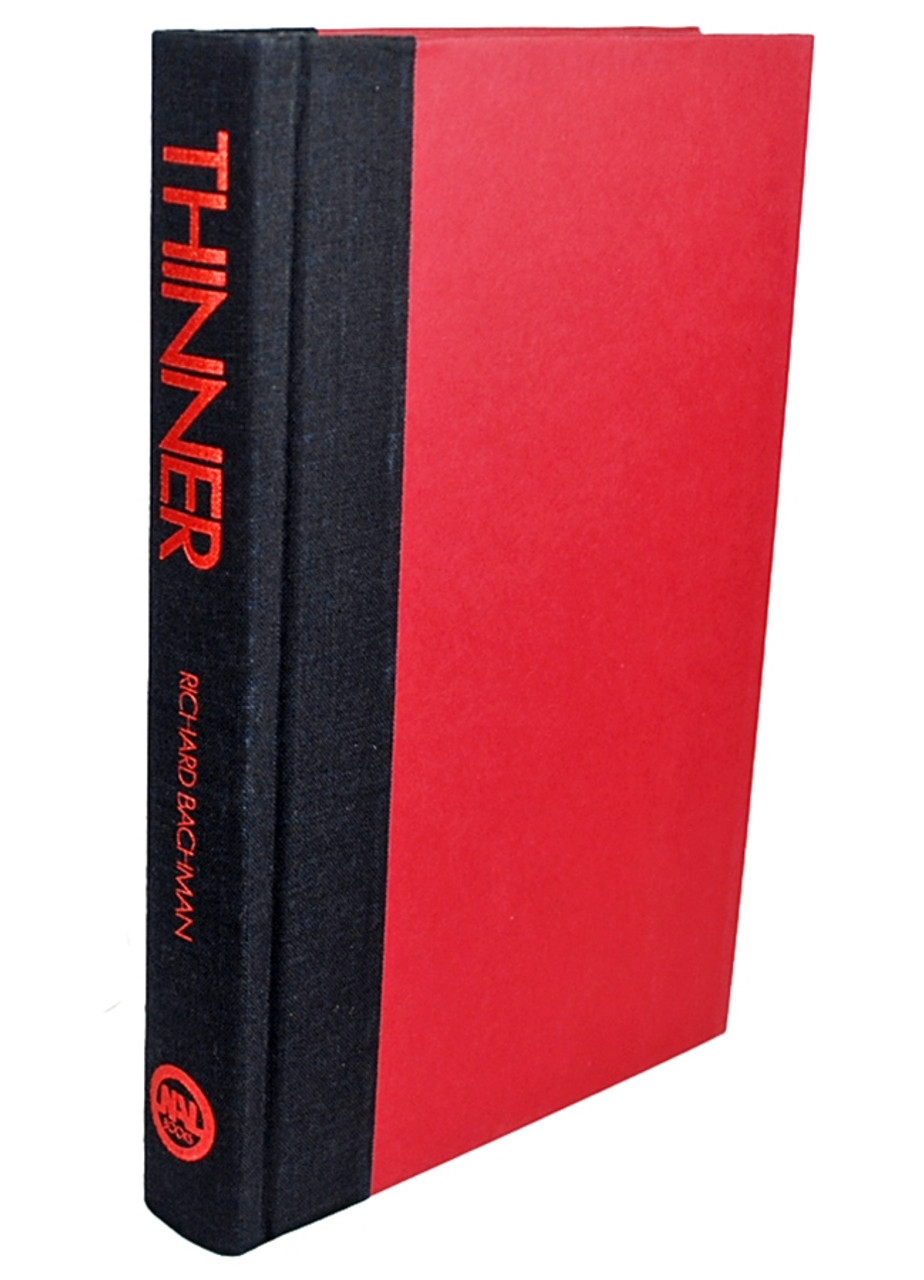 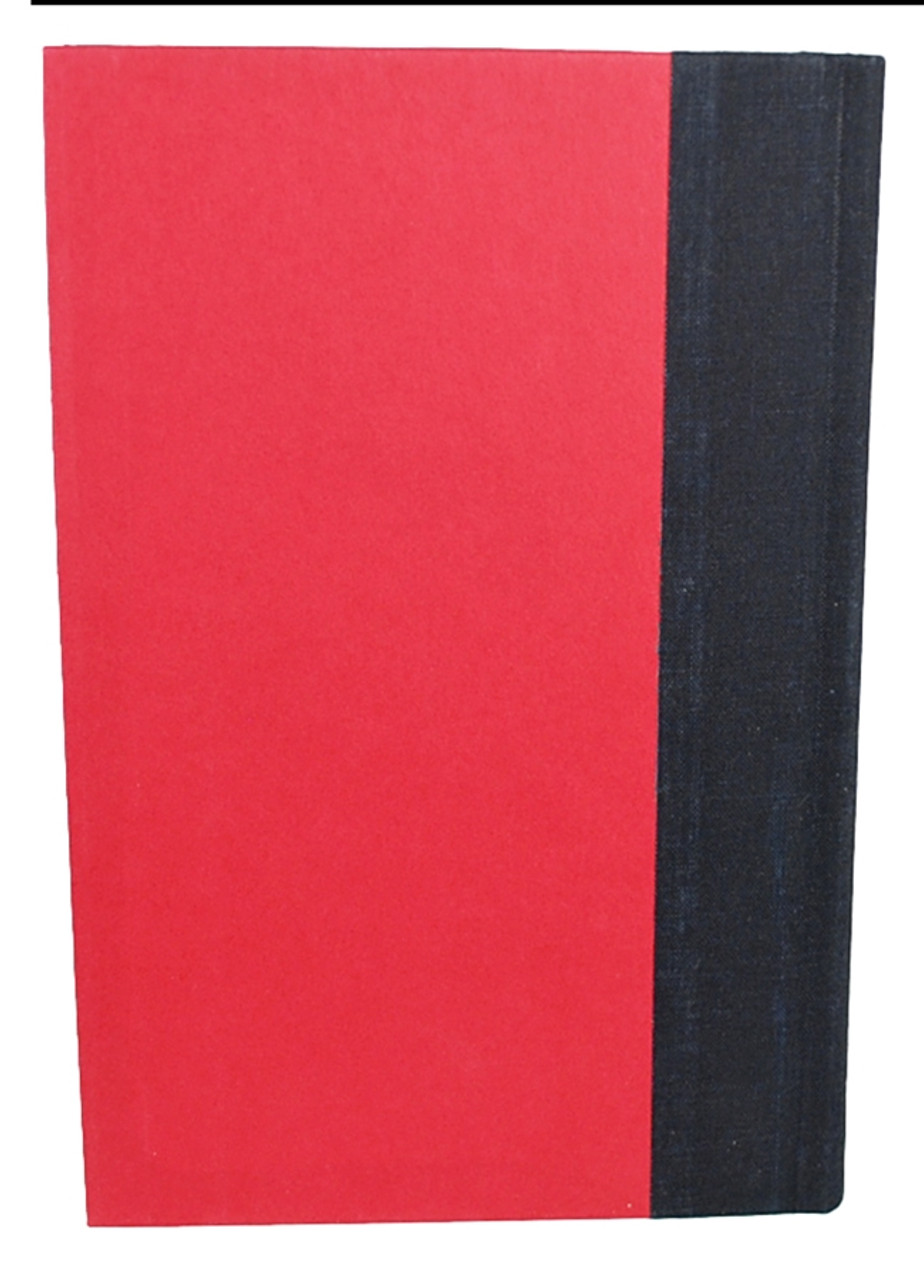 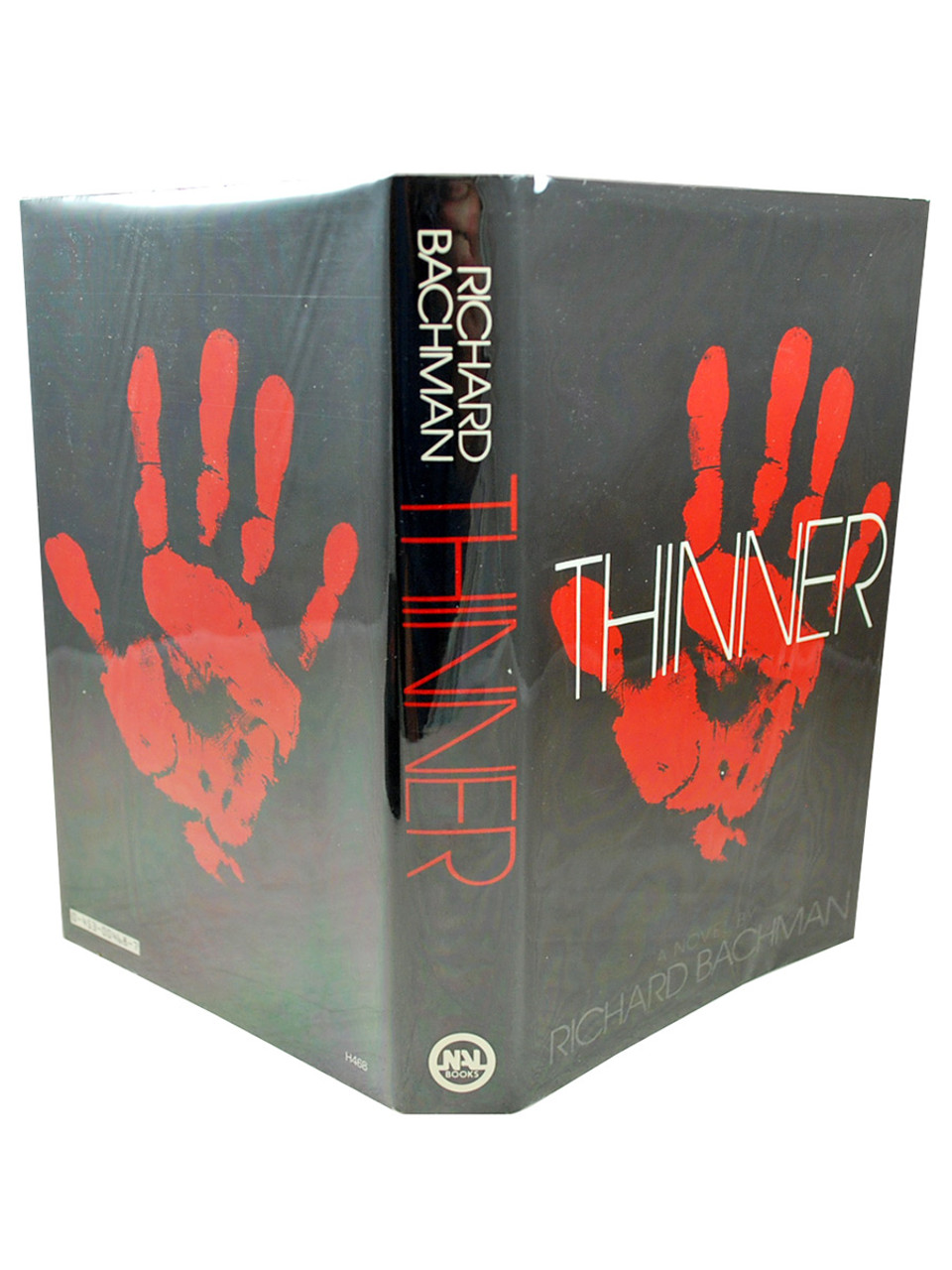 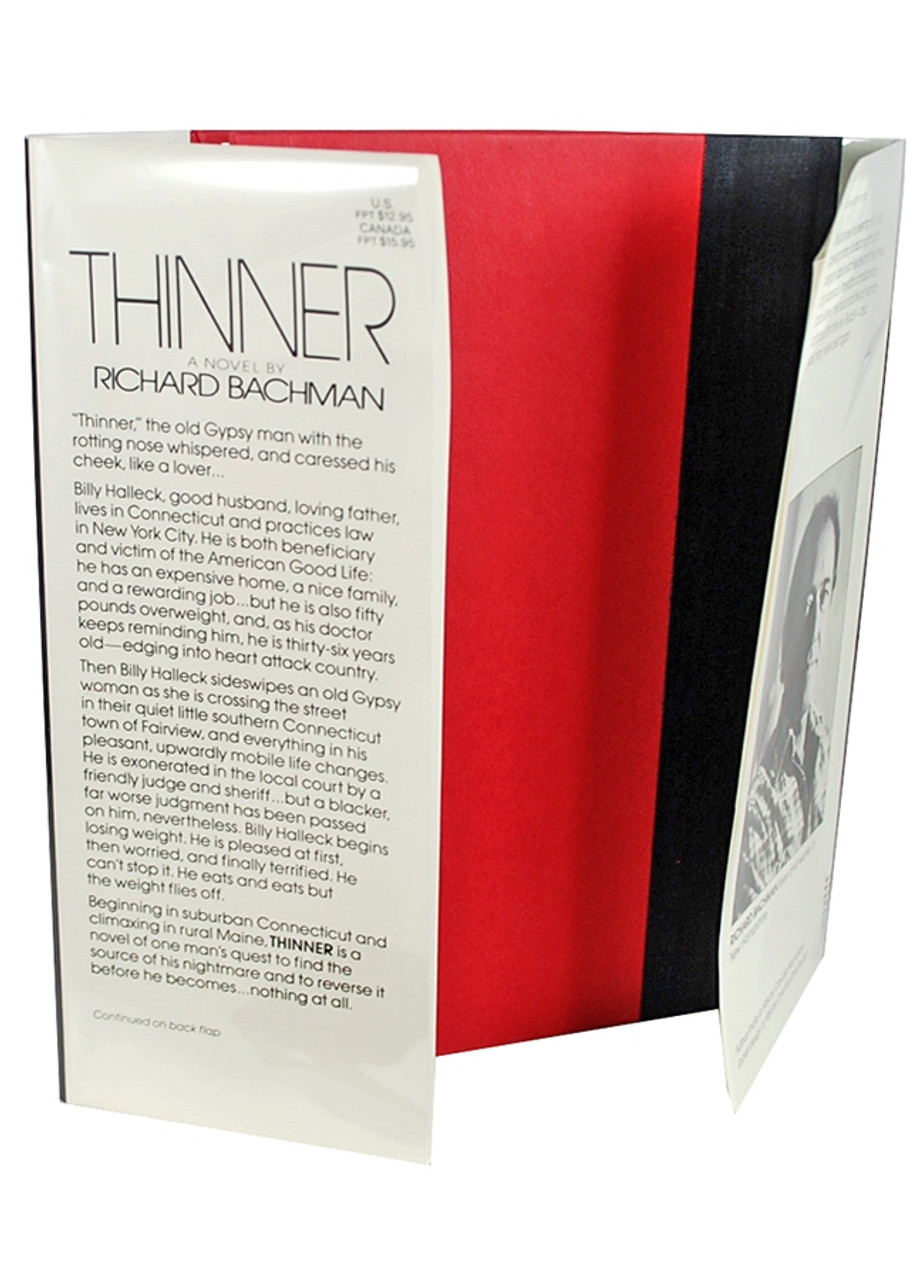 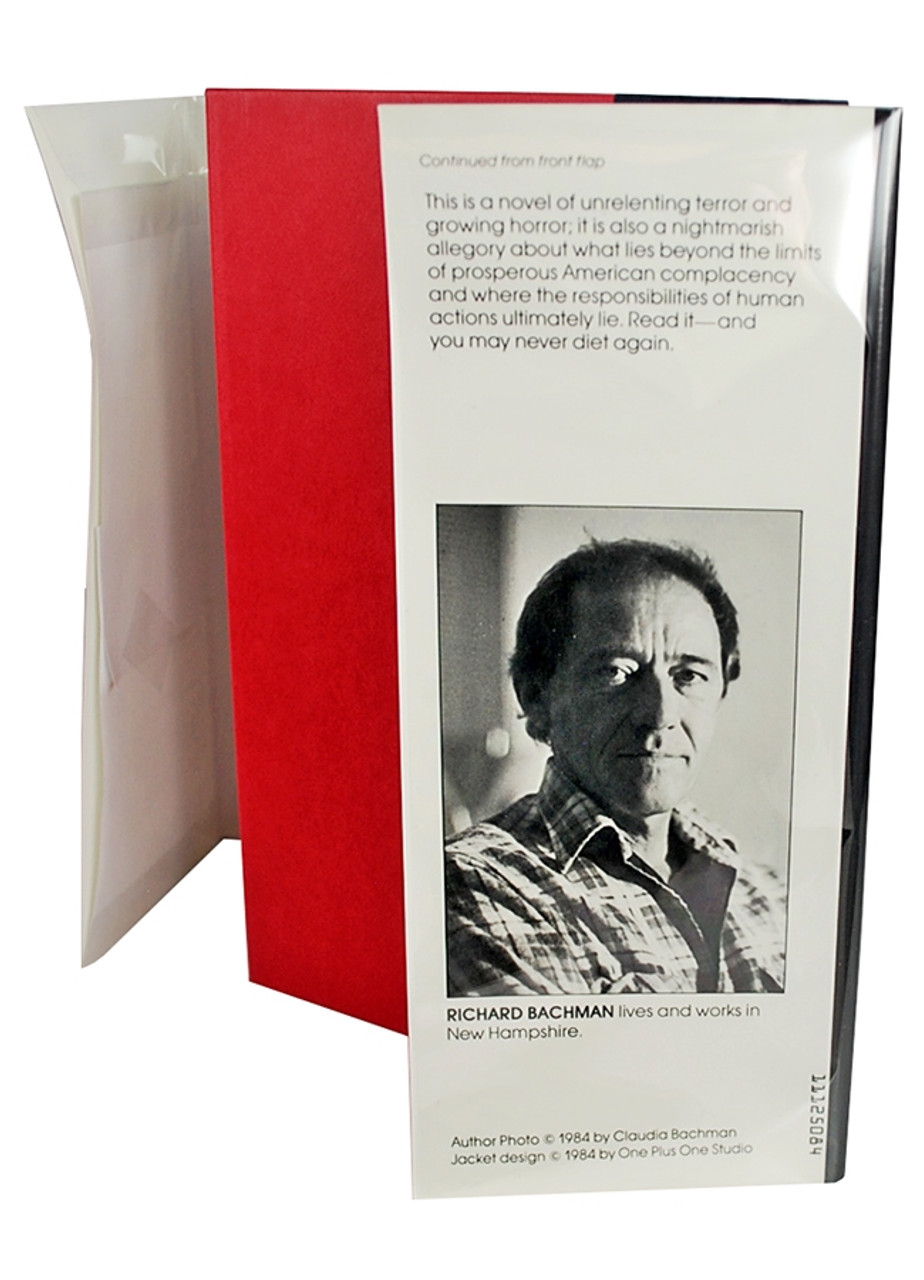 'An incredibly gifted writer, whose writing, like Truman Capote's, is so fluid that you often forget that you're reading' -- Guardian

Stephen King writing as Richard Bachman. NAL BOOKS. New American Library, 1984. "Thinner" Stephen King. First Edition. First Printing. Hardcover book with matching custom designed slipcase. This is the first edition of the novel whose release revealed the news that the mysterious Richard Bachman was none other than Stephen King. Photos of actual item.

"First Printing, November, 1984" with full number line as required on the copyright page.

After an old gypsy woman is killed by his car, lawyer Billy Halleck is stricken with a flesh-wasting malady and must undertake a nightmarish journey to confront the forces of death.

Thinner is a horror novel by American author Stephen King, published in 1984 by NAL under King's pseudonym Richard Bachman.[1] The story centers on lawyer Billy Halleck, who kills a crossing Romani woman in a road accident and escapes legal punishment because of his connections. However, the woman's father places a curse on Halleck, which causes him to lose weight uncontrollably. King, who was overweight at the time of the novel's writing, created the novel's outline following an annual medical examination.

Following the book's release, media outlets discussed the similarities between the works of Bachman and King. Eventually, bookstore clerk Stephen Brown, a fan of King's work, located evidence from copyright data held in the Library of Congress that Bachman and King were the same person. After the secret of King's pseudonym was revealed, sales of Thinner increased tenfold. In total, over three million copies of Thinner have been sold. Critical reception to Thinner was polarized; some reviewers disliked the authorship deception and pessimistic ending, while others held these same points as merits of the book. The literary style, however, was generally praised. A film adaptation was released in 1996.

At the beginning of Stephen King's career, the general view among publishers was that an author was limited to one book per year, since publishing more would be unacceptable to the public. King therefore wanted to write under another name, in order to increase his publication without over-saturating the market for the King "brand". He convinced his publisher, Signet Books, to print these novels under a pseudonym.

In his introduction to The Bachman Books, King states that adopting the nom de plume Bachman was also an attempt to make sense out of his career and try to answer the question of whether his success was due to talent or luck. He says he deliberately released the Bachman novels with as little marketing presence as possible and did his best to "load the dice against" Bachman. King concludes that he has yet to find an answer to the "talent versus luck" question, as he felt he was outed as Bachman too early to know. The Bachman book Thinner (1984) sold 28,000 copies during its initial run—and then ten times as many when it was revealed that Bachman was, in fact, King.

Hardcover: Fine. A wonderful bright clean copy free of any markings, writings, or stamps inside the book. Sharp corners that have not been bumped. Tight binding, most likely an unread book. No bookplates attached or indication of any removed.

Dust-jacket: NF+. The dust-jacket is now protected in a brand new Brodart archival acid-free sleeve. Photos of actual item. Diagonal crease to bottom of price flap. Clear and not faded.

Slipcase: As new without any flaws.
Photos of actual item.

In this #1 national bestseller, “master storyteller” (Houston Chronicle) Stephen King, writing as Richard Bachman, tells the tale of the contestants of a grueling walking competition where there can...