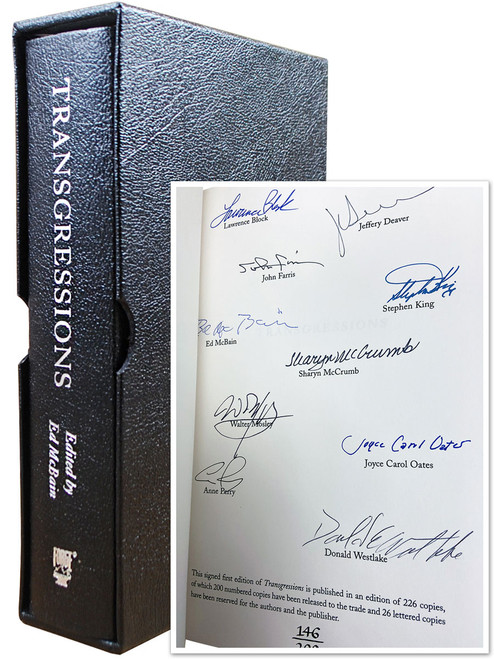 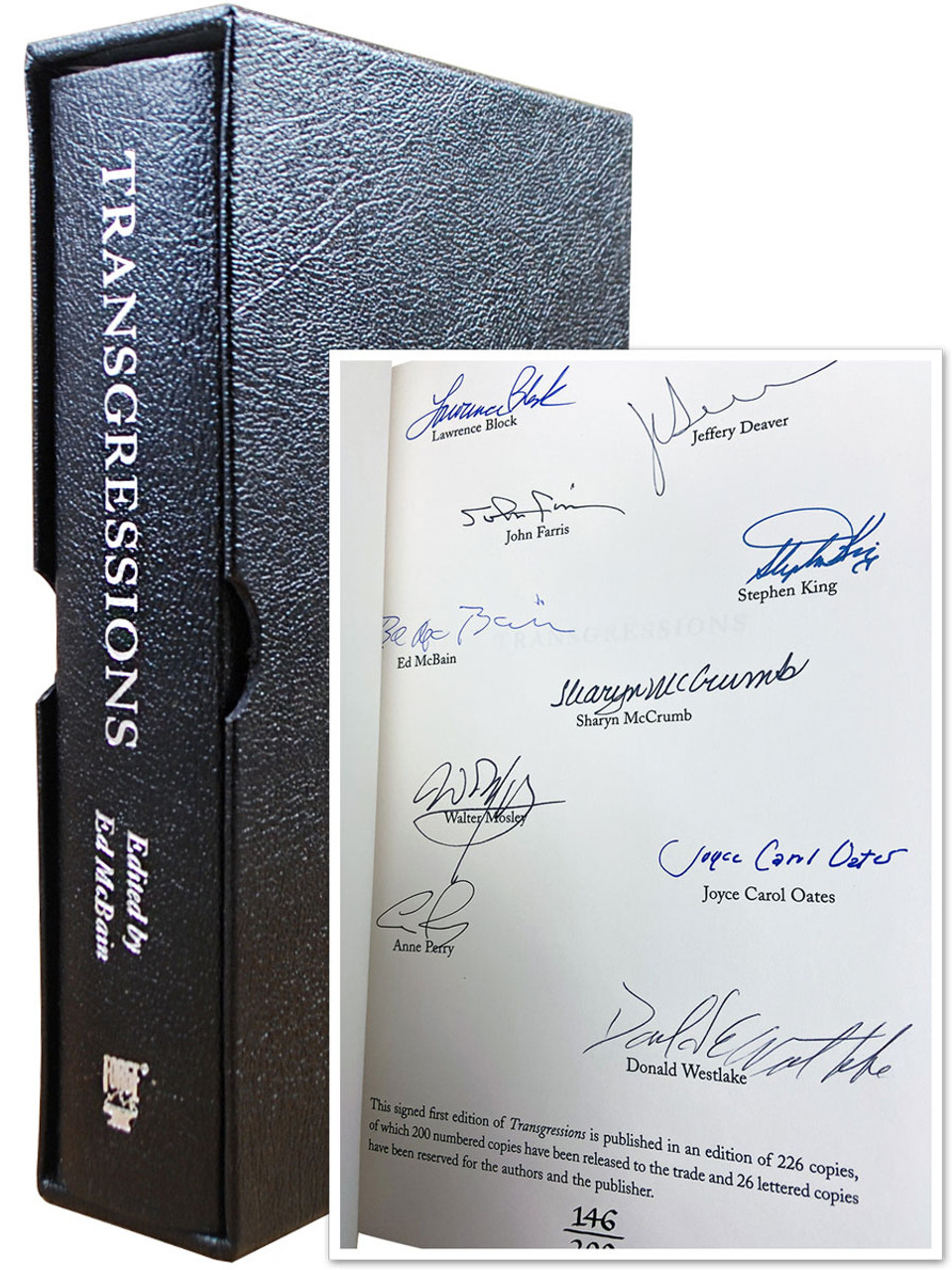 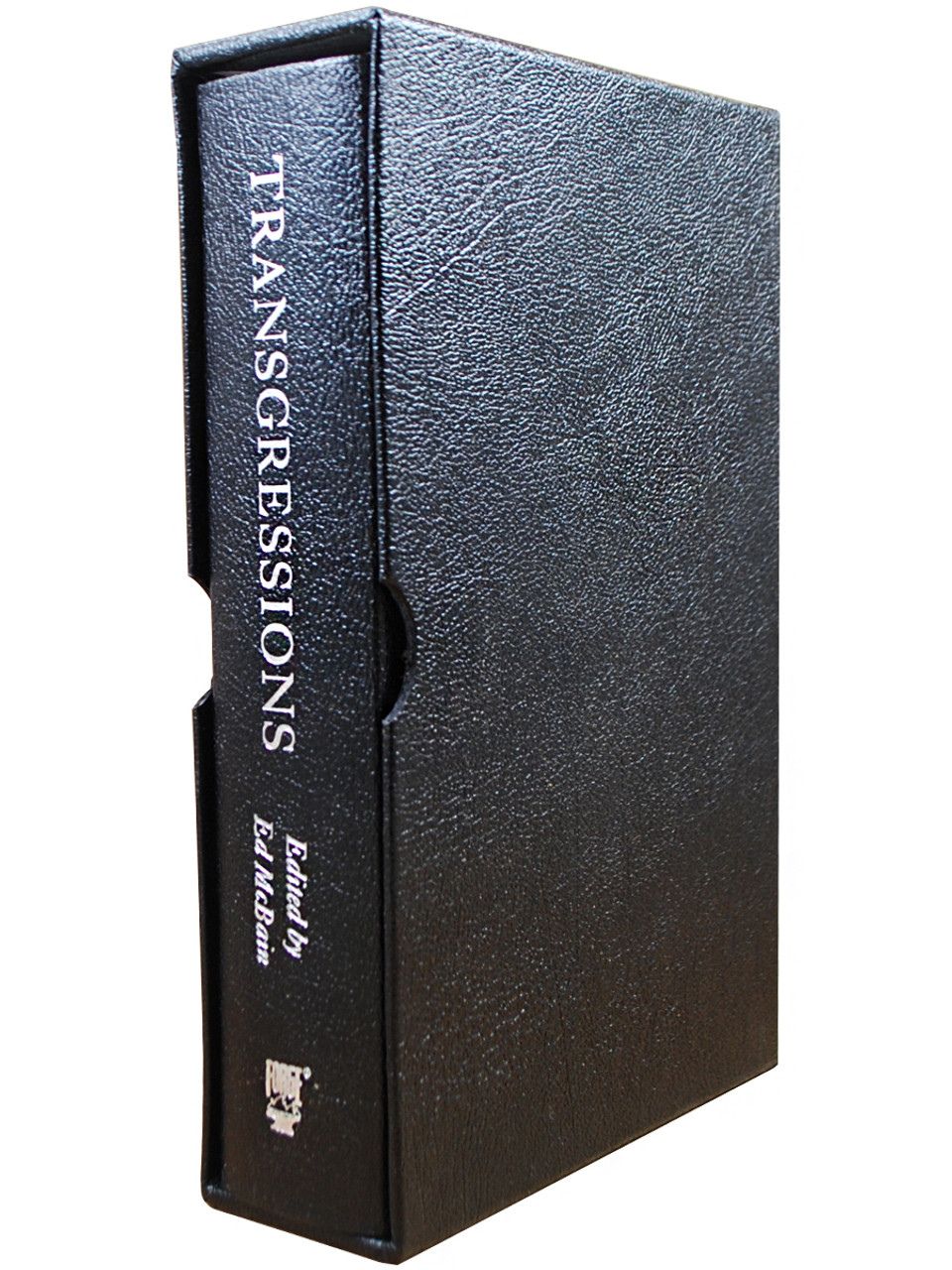 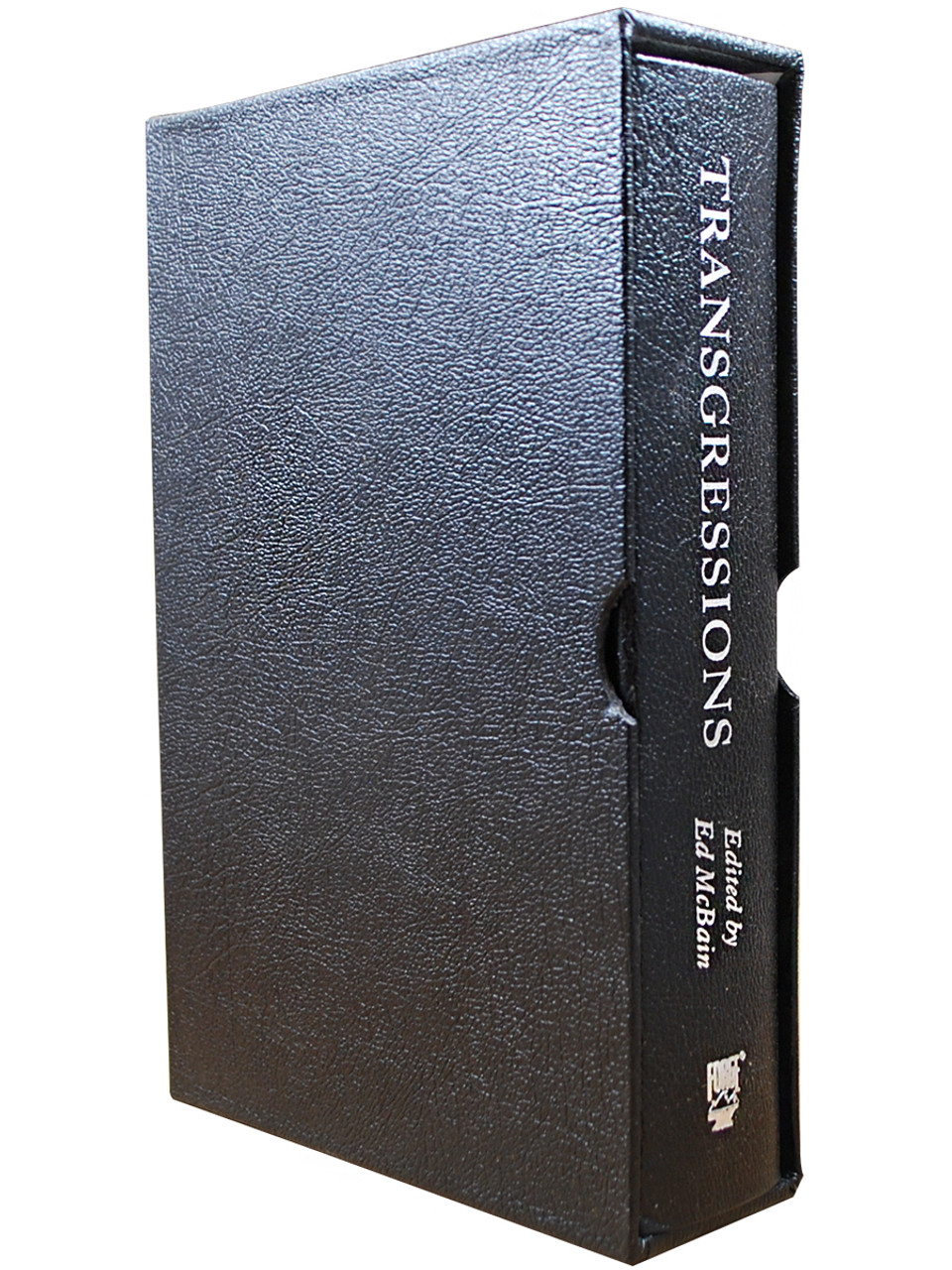 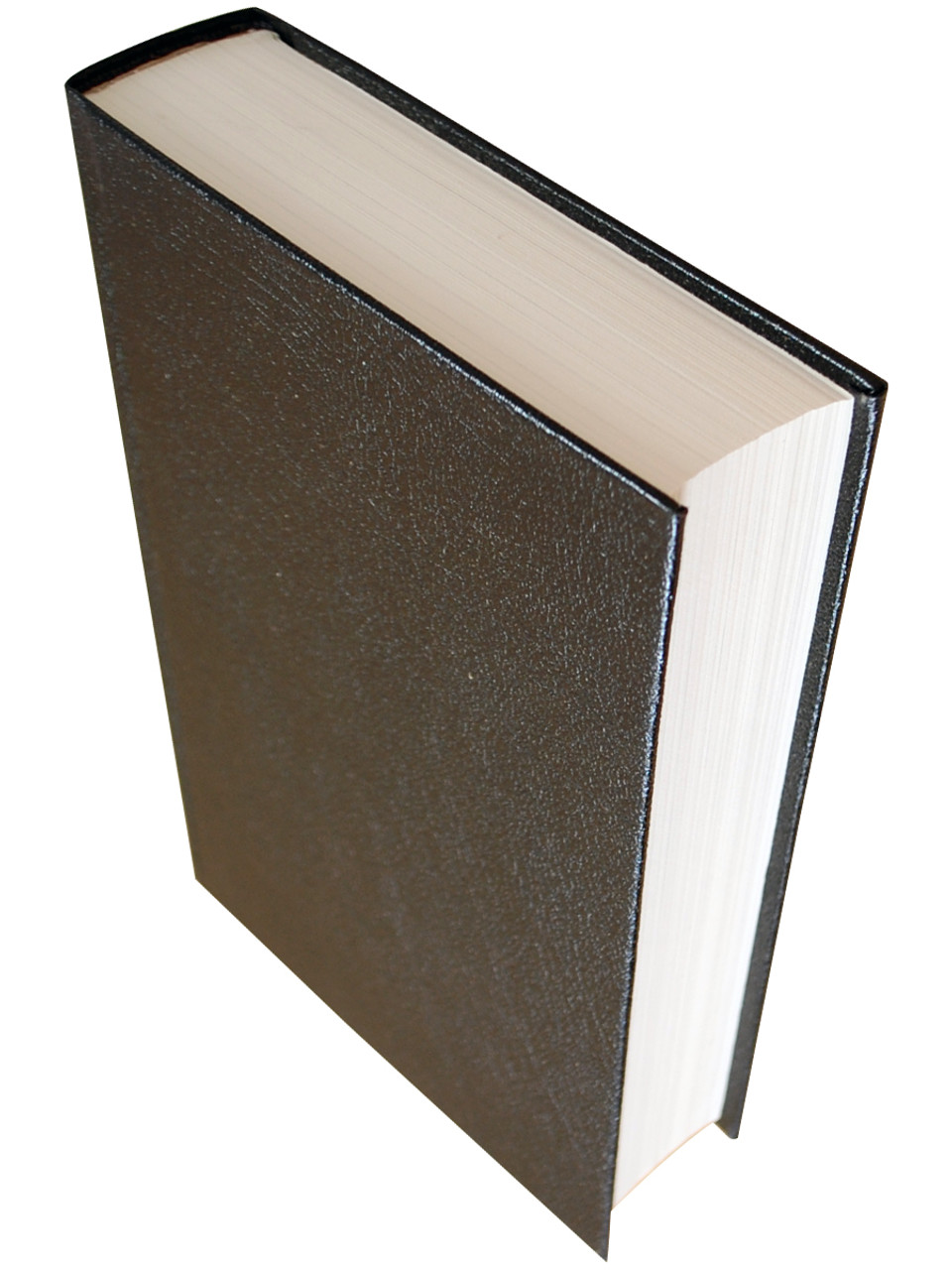 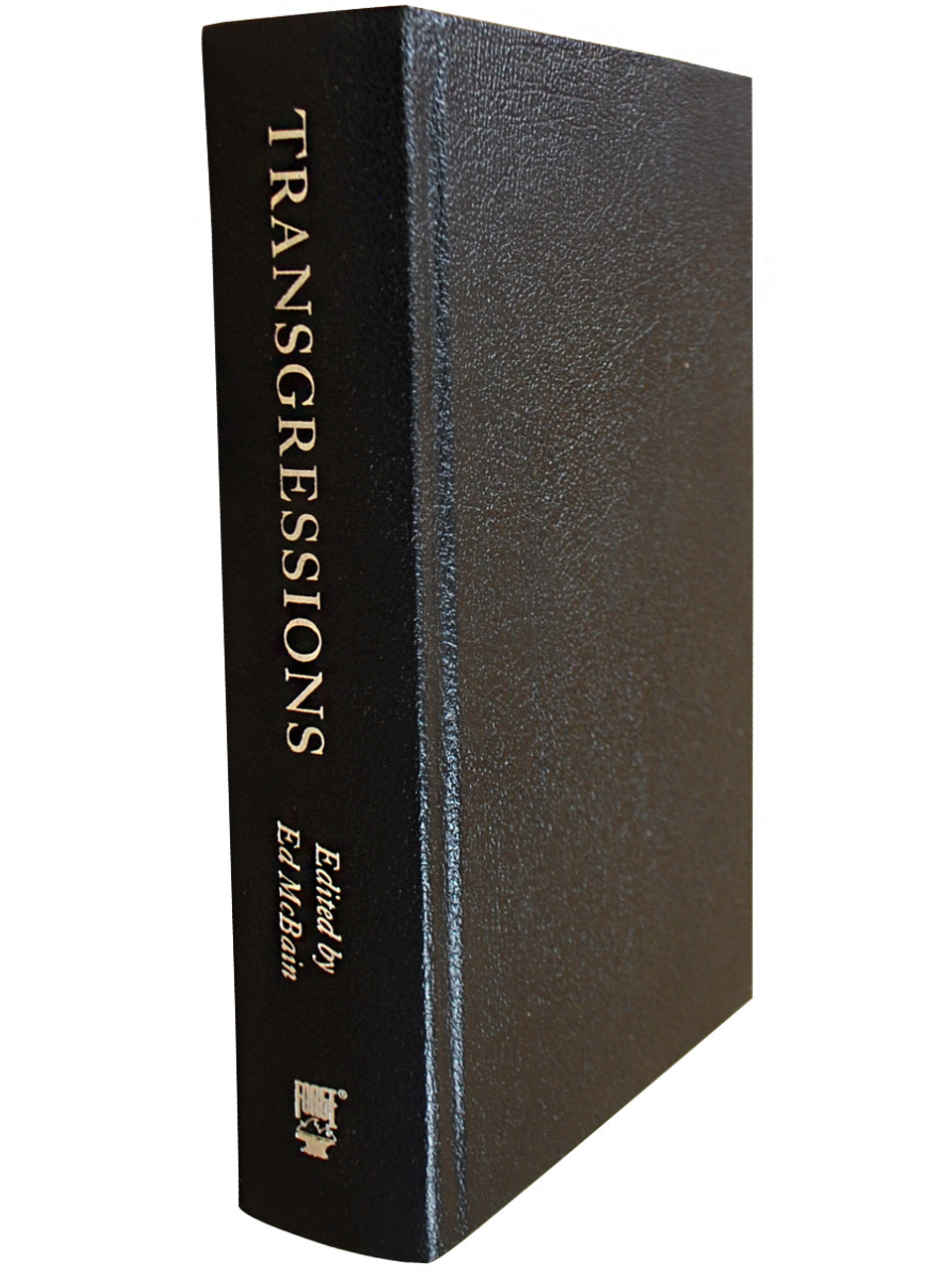 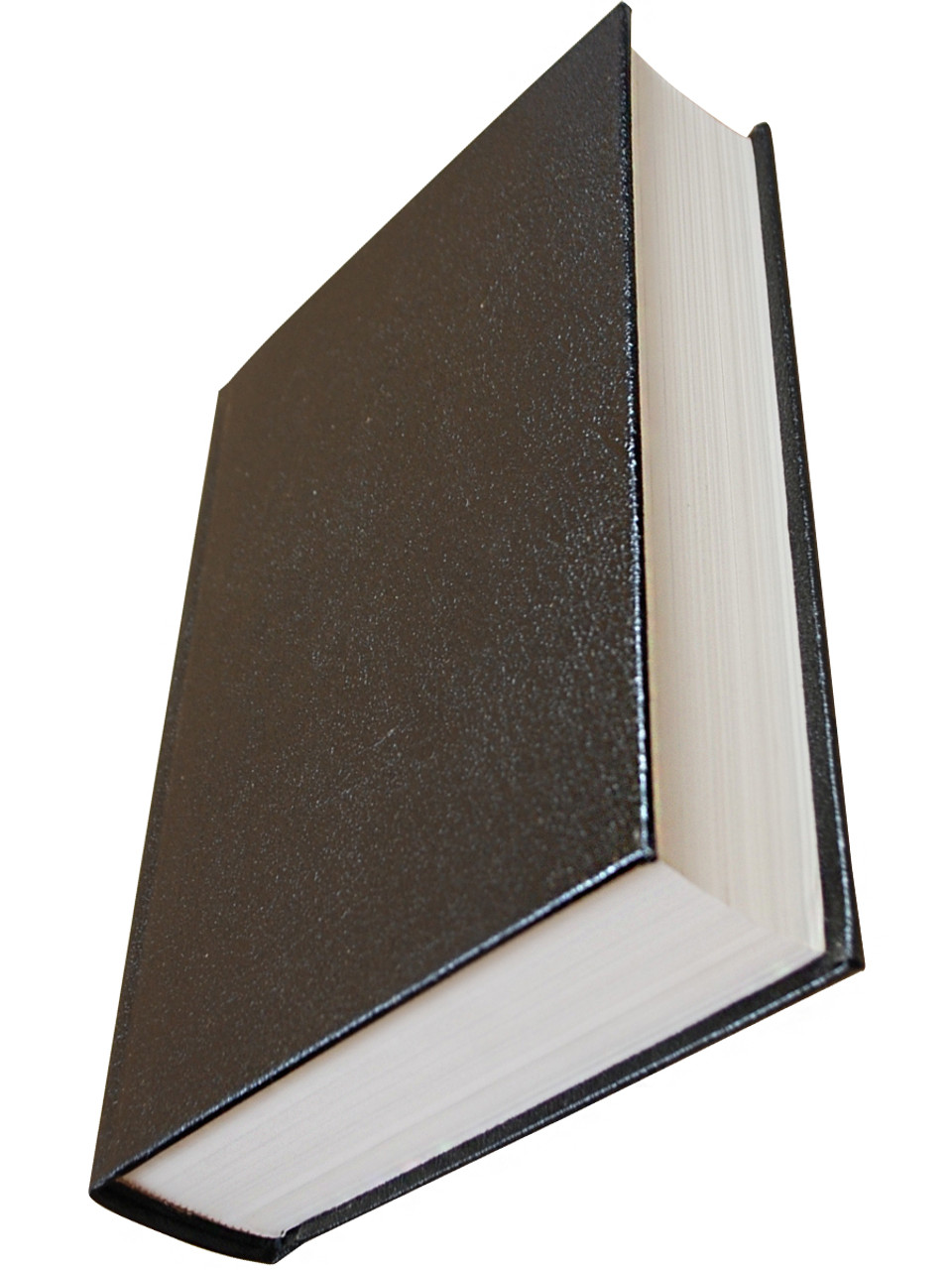 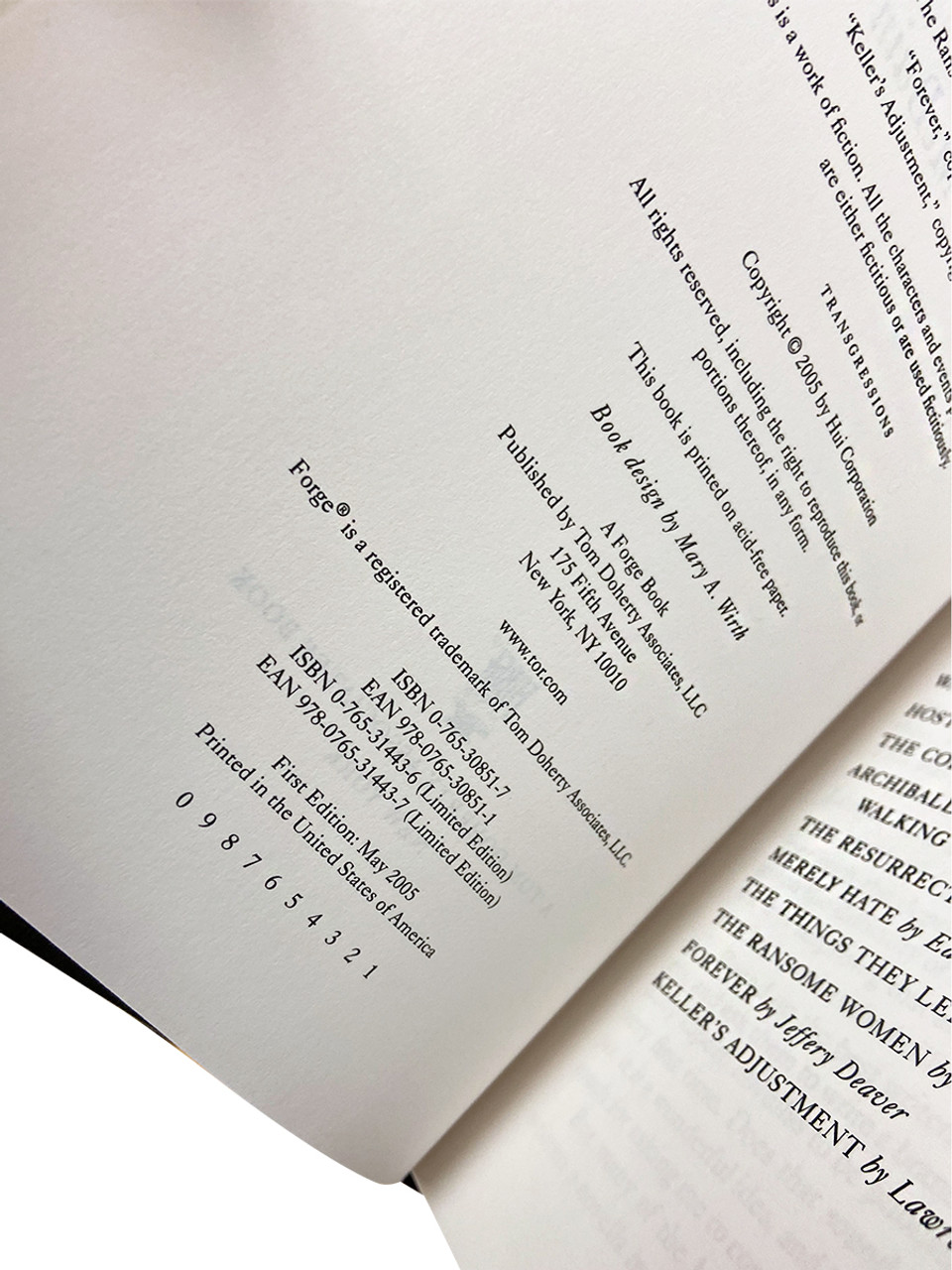 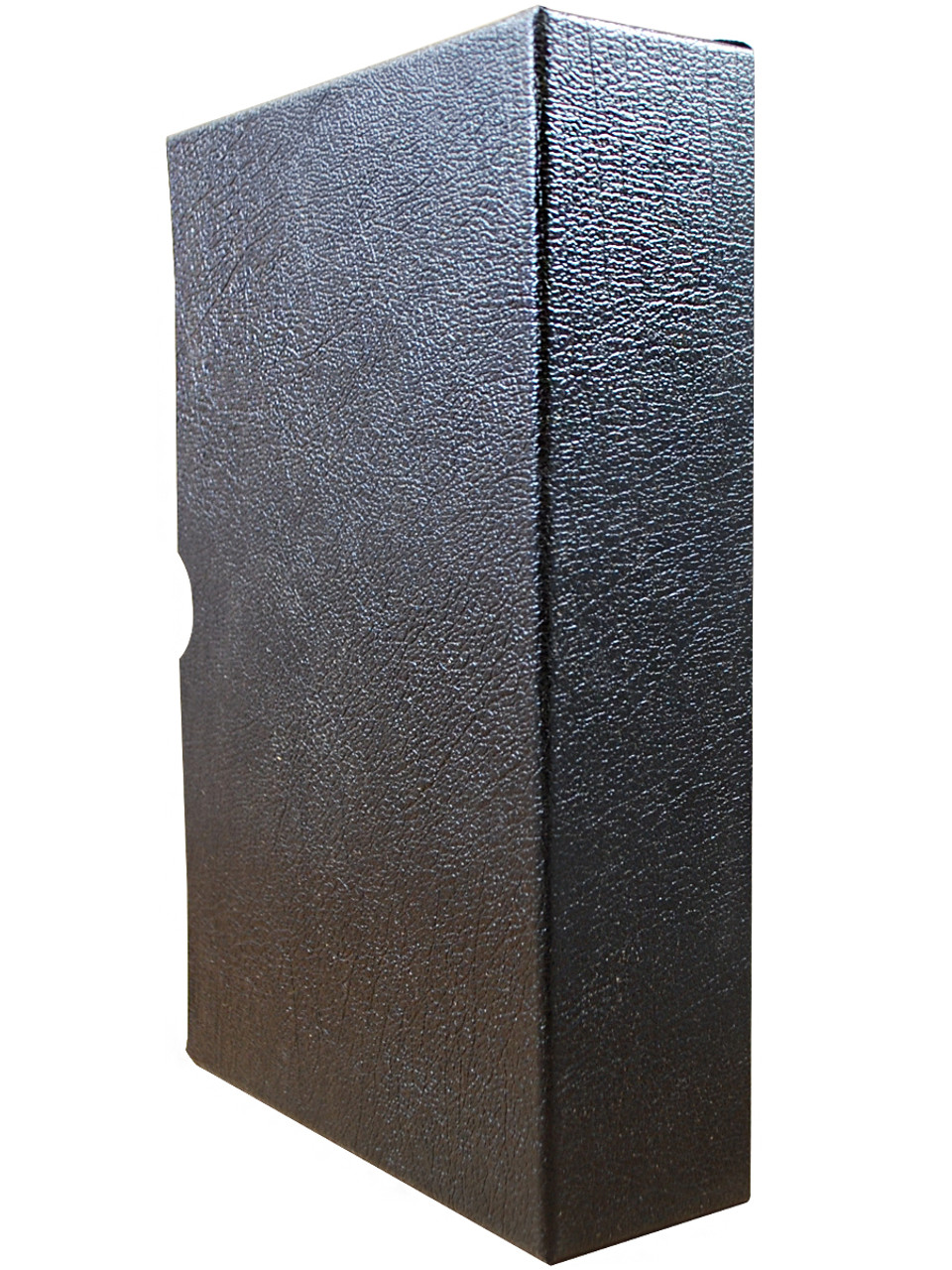 A Truly Unique Collector's Item - Signed Limited Edition of Only 200

This is number 146 of only 200 copies produced with the original shipping container that has the matching number of the book.  This is one of the lowest print runs for a signed and numbered Stephen King related limited edition EVER!

This book contains the FIRST PUBLICATION of Stephen King's new 9/11 inspired novella, "The Things They Left Behind", which hasn't been published anywhere else, not even in one of his collections.

This edition has been personally signed by all 10 contributors:

Transgressions is a quintessential classic of never-before-published tales from today's very best novelists.

"Walking Around Money" by Donald E. Westlake: The master of the comic mystery is back with an all-new novella featuring hapless crook John Dortmunder, who gets involved in a crime that supposedly no one will ever know happened. Naturally, when something it too good to be true, it usually is, and Dortmunder is going to get to the bottom of this caper before he's left holding the bag.

"Hostages" by Anne Perry: The bestselling historical mystery author has written a tale of beautiful yet still savage Ireland today. In their eternal struggle for freedom, there is about to be a changing of the guard in the Irish Republican Army. Yet for some, old habits-and honor-still die hard, even at gunpoint.

"The Corn Maiden" by Joyce Carol Oates: When a fourteen-year-old girl is abducted in a small New York town, the crime starts a spiral of destruction and despair as only this master of psychological suspense could write it.

"Archibald Lawless, Anarchist at Large: Walking the Line" by Walter Mosley: Felix Orlean is a New York City journalism student who needs a job to cover his rent. An ad in the paper leads him to Archibald Lawless, and a descent into a shadow world where no one and nothing is as it first seems.

"The Resurrection Man" by Sharyn McCrumb": During America's first century, doctors used any means necessary to advance their craft-including dissecting corpses. Sharyn McCrumb brings the South of the 1850s to lifein this story of a man who is assigned to dig up bodies to help those that are still alive.

"Merely Hate" by Ed McBain: When a string of Muslim cabdrivers are killed, and the evidence points to another ethnic group, the detectives of the 87th Precinct must hunt down a killer before the city explodes in violence.

"The Things They Left Behind" by Stephen King: In the wake of the worst disaster on American soil, one man is coming to terms with the aftermath of the Twin Towers-when he begins finding the things they left behind.

"The Ransome Women" by John Farris: A young and beautiful starving artist is looking to catch a break when her idol, the reclusive portraitist John Ransome offers her a lucrative year-long modeling contract. But how long will her excitement last when she discovers the fate shared by all Ransome's past subjects?

"Forever" by Jeffery Deaver: Talbot Simms is an unusual cop-he's a statistician with the Westbrook County Sheriff Department. When two wealthy couples in the county commit suicide one right after the other, he thinks that it isn't suicide-it's murder, and he's going to find how who was behind it, and how the did it.

"Keller's Adjustment" by Lawrence Block: Everyone's favorite hit man is back in MWA Grand Master Lawrence Block's novella, where the philosophical Keller deals out philosophy and murder on a meandering road trip from one end of the America to the other.

Starred Review. As editor McBain admits in his introduction, it was a bit of a challenge to persuade 10 superstar authors (well, only nine, since he's also a contributor) to each write an original novella, with its awkward length between 10,000 and 40,000 words, for this excellent crime and suspense anthology, but he's come up with an impressive roster. One can't help wondering how a writer like Donald E. Westlake, who writes so much under several names, can fit in a jolly new story, "Walking Around Money," about his humorous burglar hero Dortmunder .

And how does Anne Perry, who now writes three separate series and is probably planning another, move to a completely different period with "Hostages," a touching portrait of a woman caught up in the current Irish troubles who tries to keep her sanity by doing household chores? Walter Mosley, on the other hand, seems to be looking for new ways to get his points across: his "Archibald Lawless, Anarchist at Large: Walking the Line" might be the fuse to light a fire. McBain's own "Merely Hate" lends fresh insight into his 87th Precinct series. The remaining novellas, from the ubiquitous Joyce Carol Oates and the welcome return of Lawrence Block's hit man Keller to the diverse pleasures of Sharyn McCrumb and Stephen King, make this hefty volume pound-for-pound the best reading value of the season.

VERY FINE GUARANTEED. Brand new, mint and flawless. Slipcase the same. Unread book with square and tight spine. No markings, writings, or stampings. No bookplate attached or indication of any removed.

Ray Bradbury "They Have Not Seen the Stars" Signed Limited Deluxe First Edition, No. 43 of 200, Slipcased, Original Box [Very Fine]

Personally signed by Ray Bradbury. Signed Limited Edition No. 43 of 200. Stealth Press 2002. Ray Bradbury "They Have Not Seen The Stars: The Collected Poetry of Ray Bradbury". Deluxe First Edition...