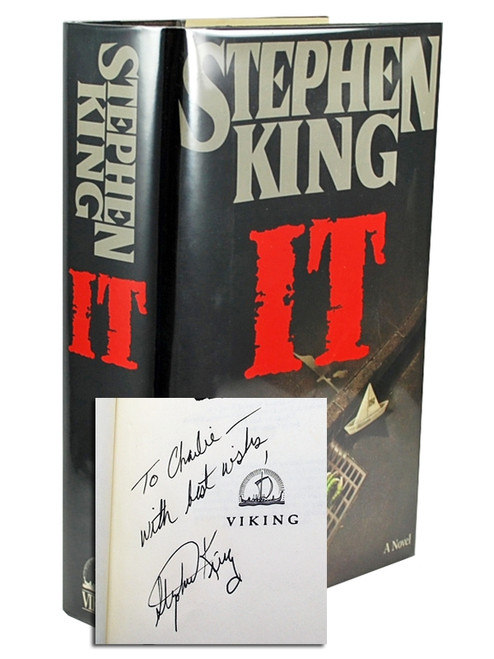 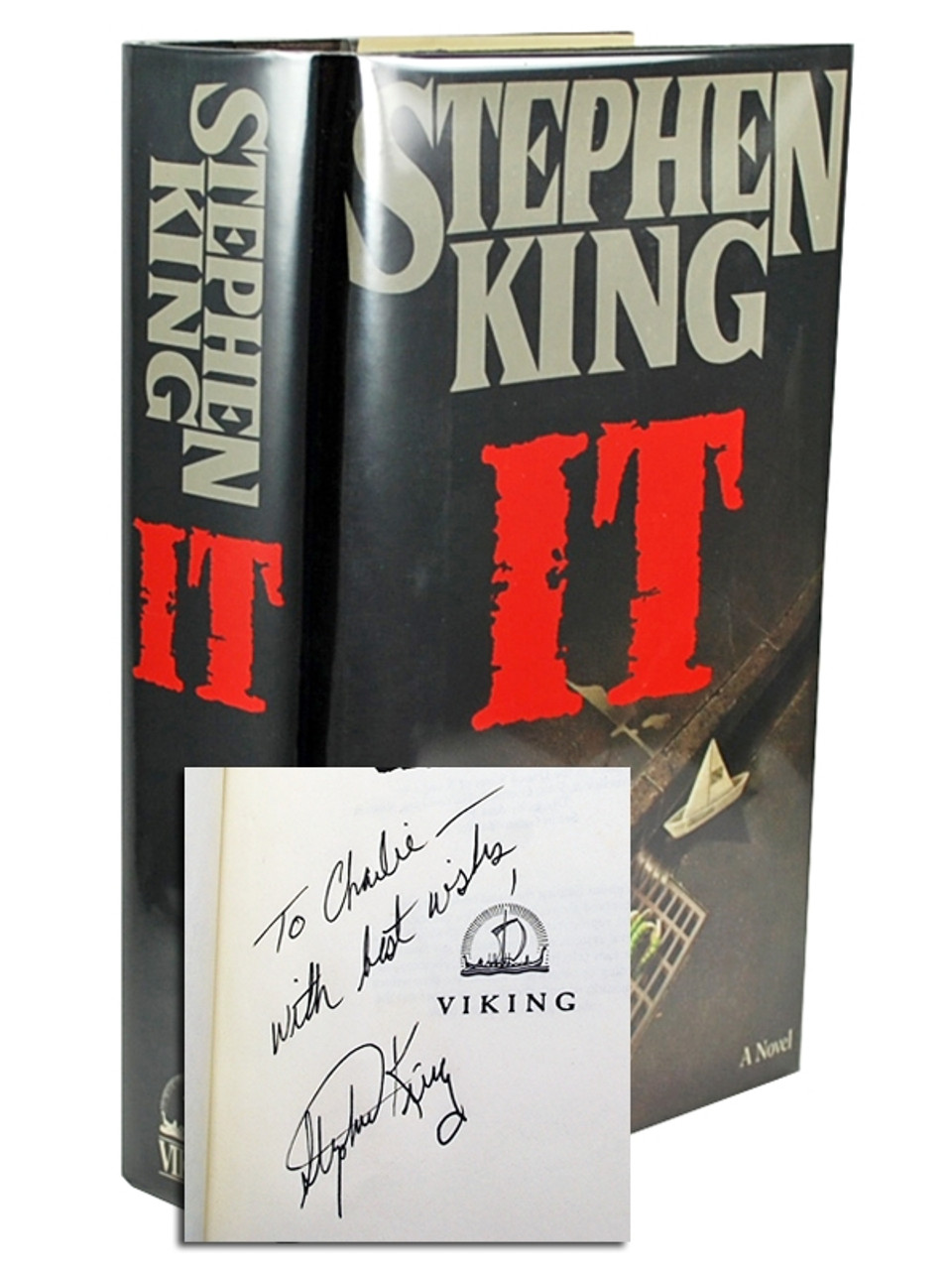 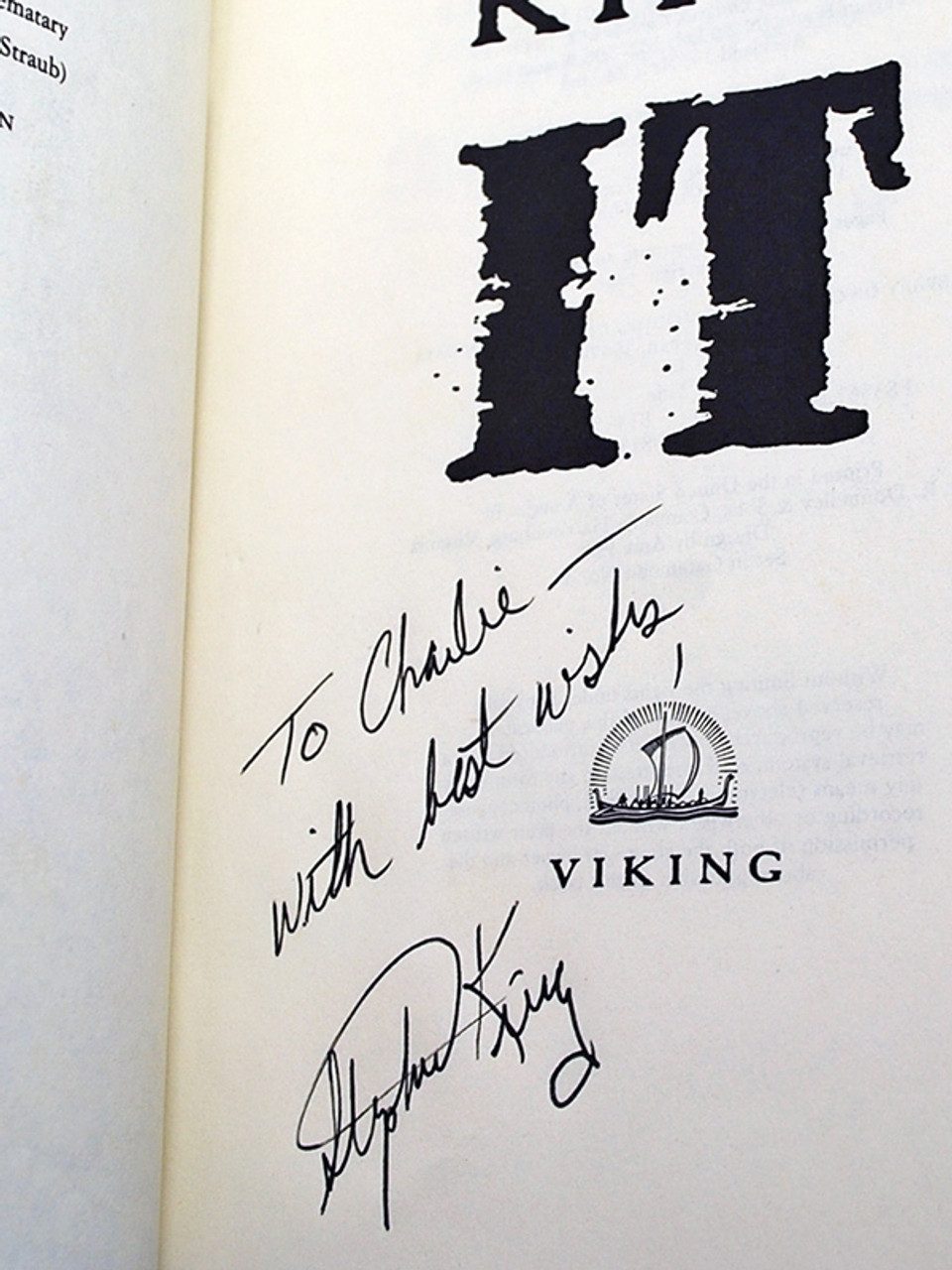 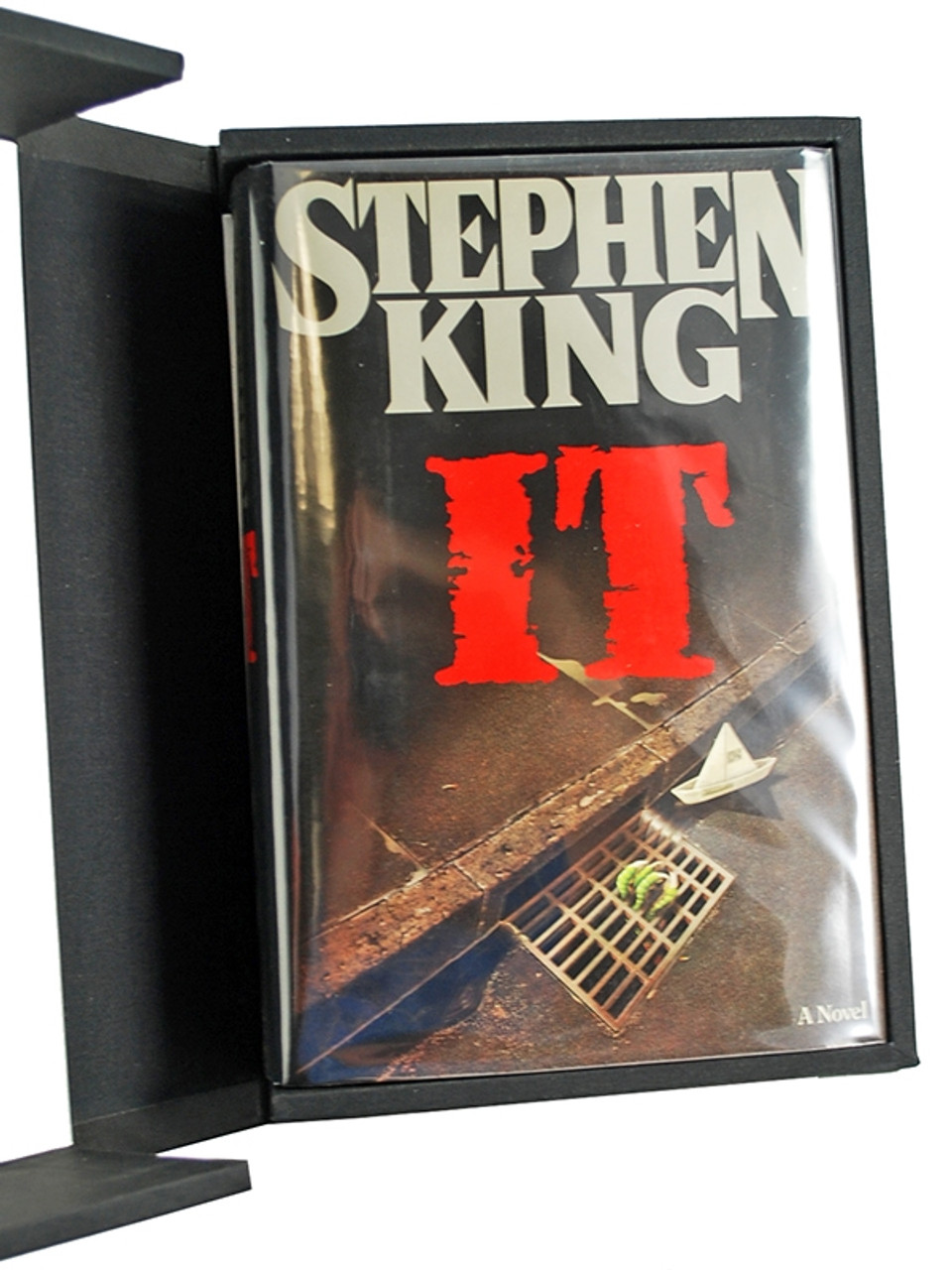 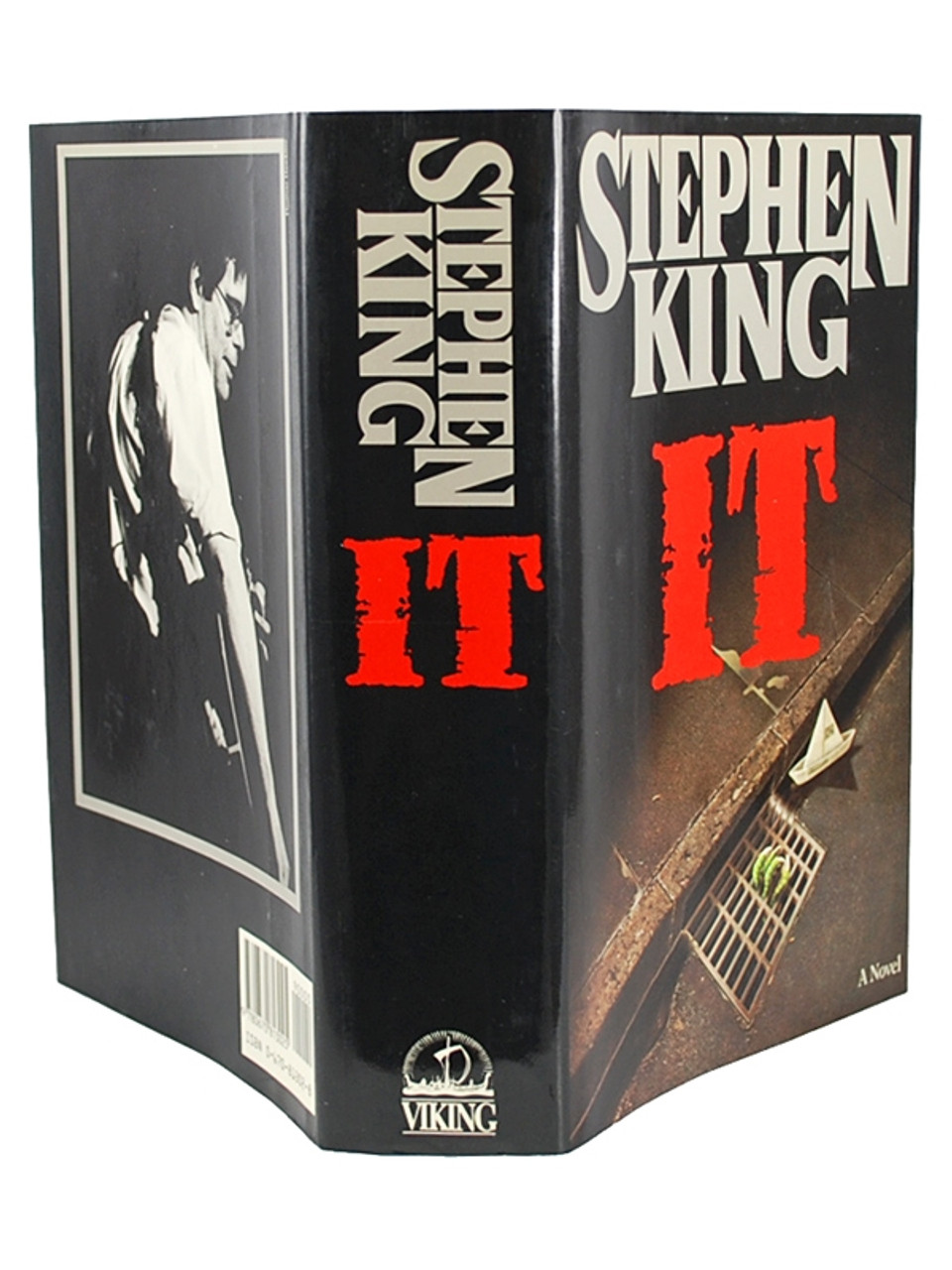 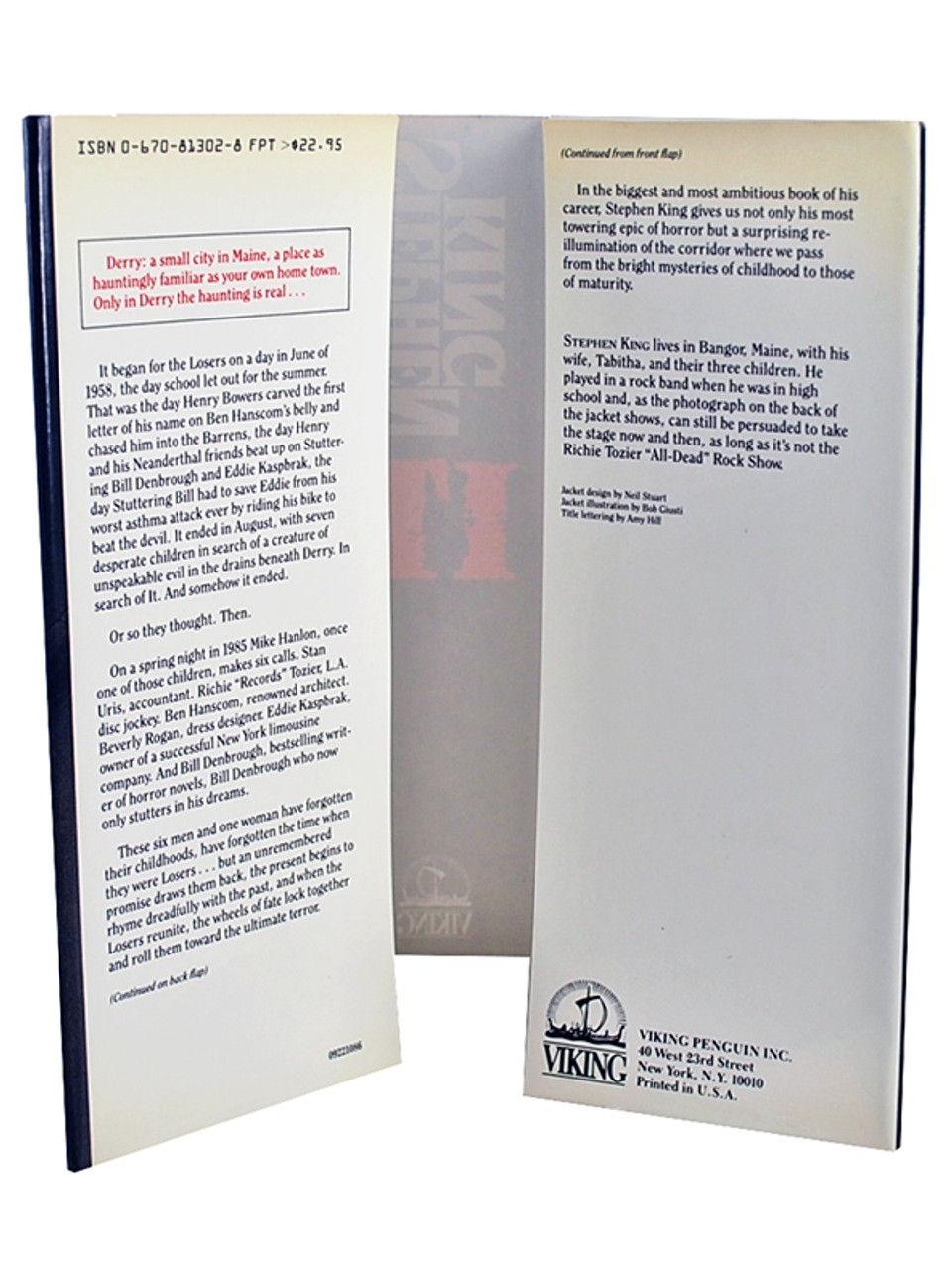 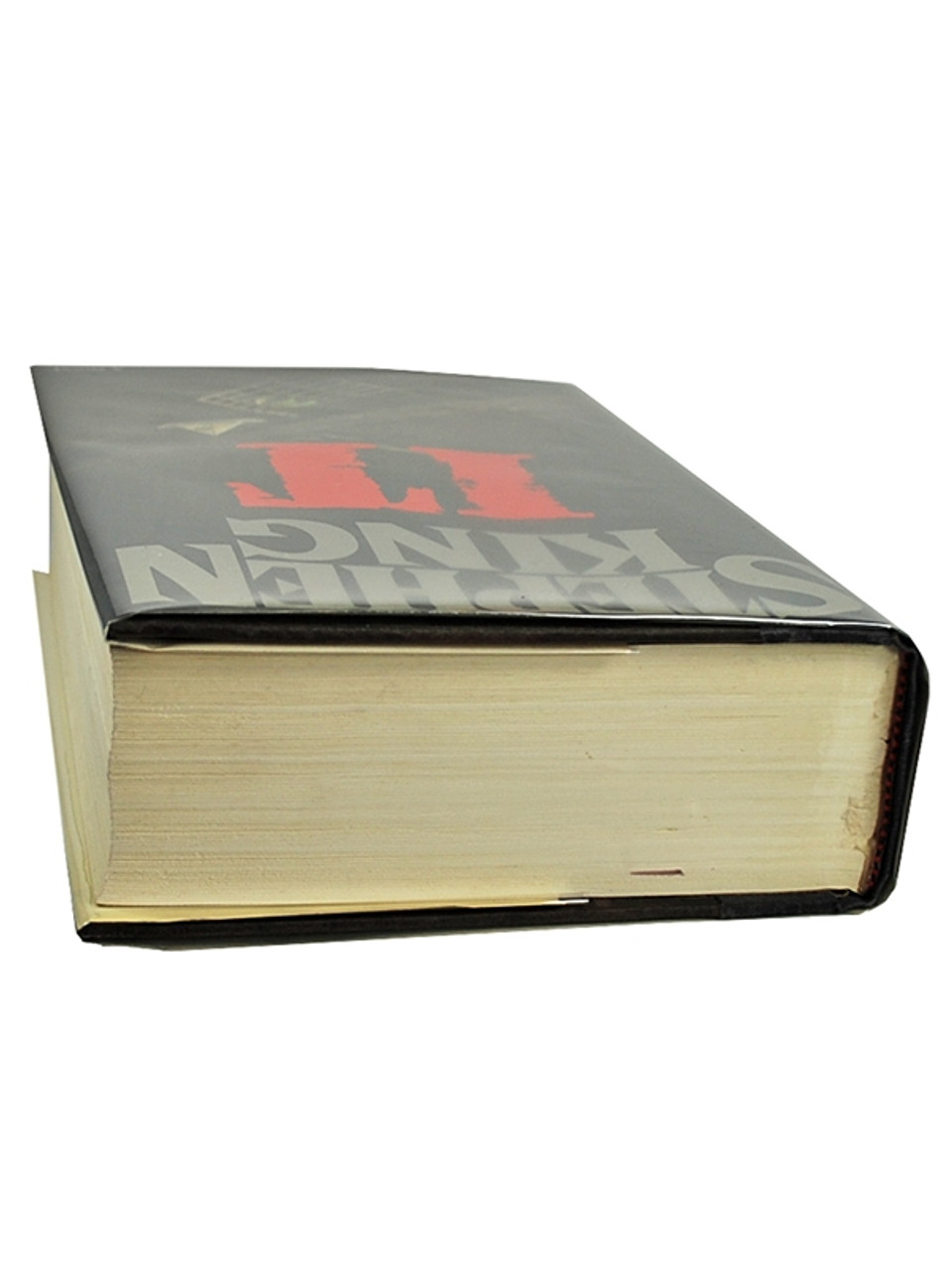 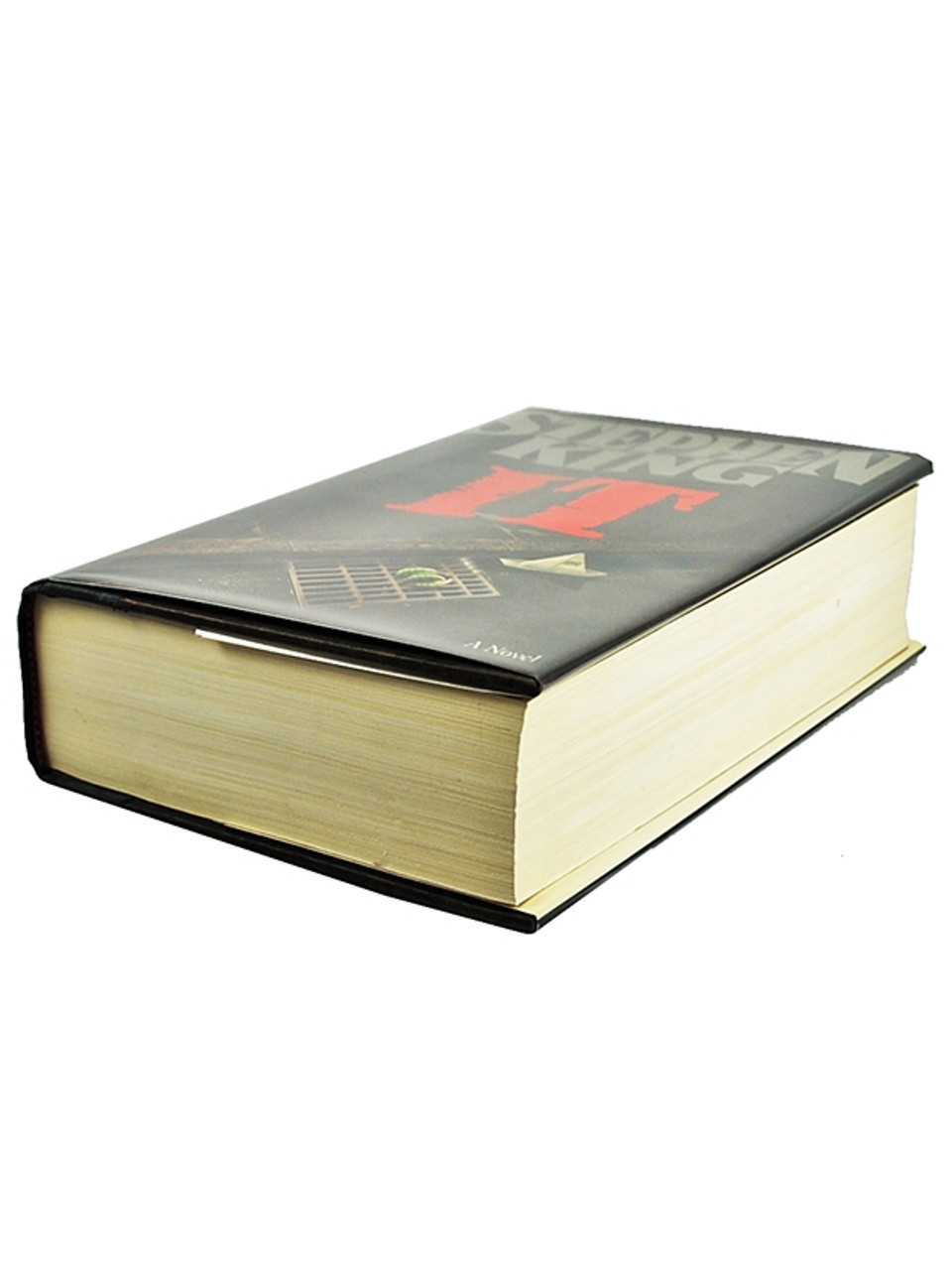 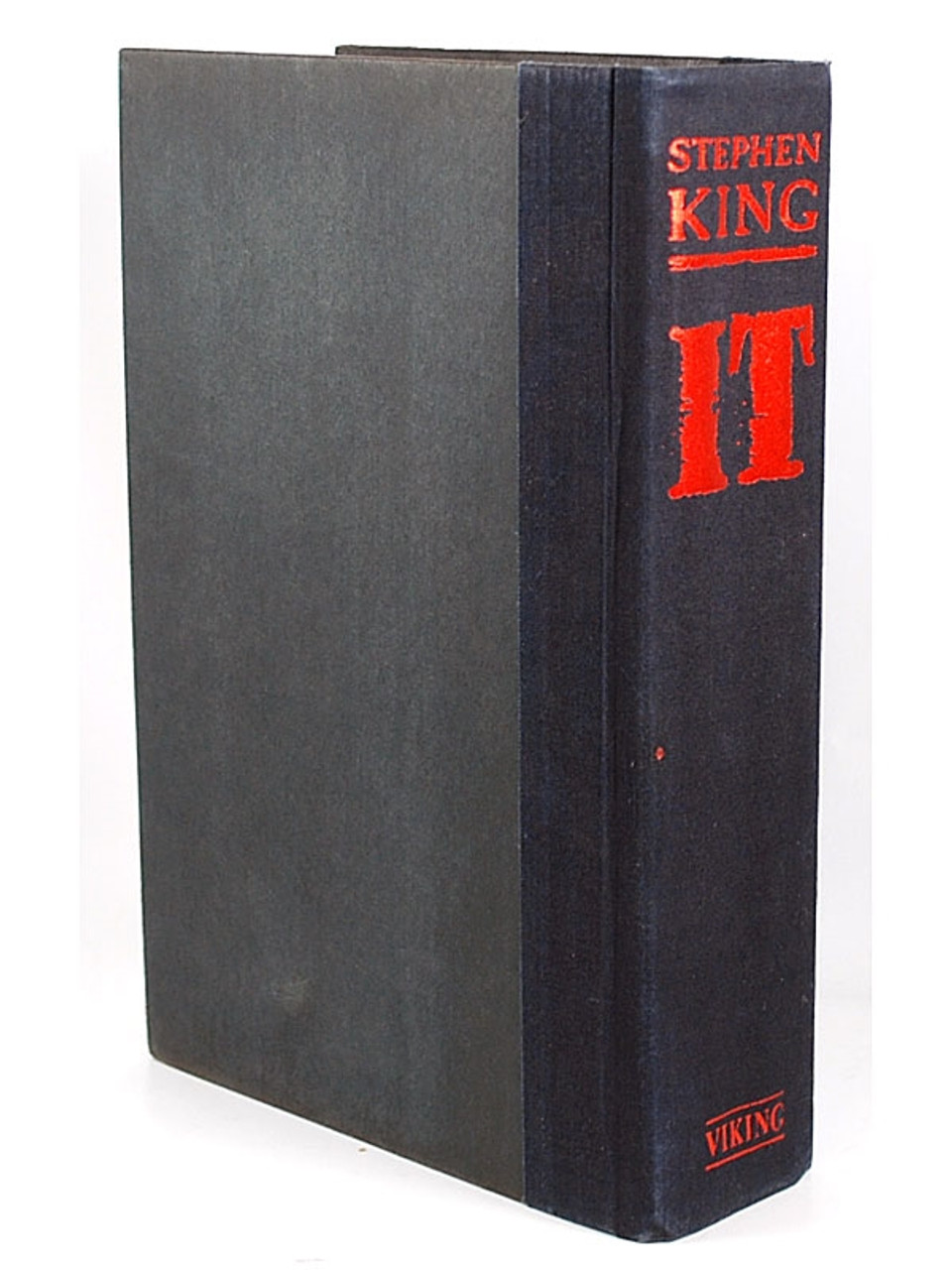 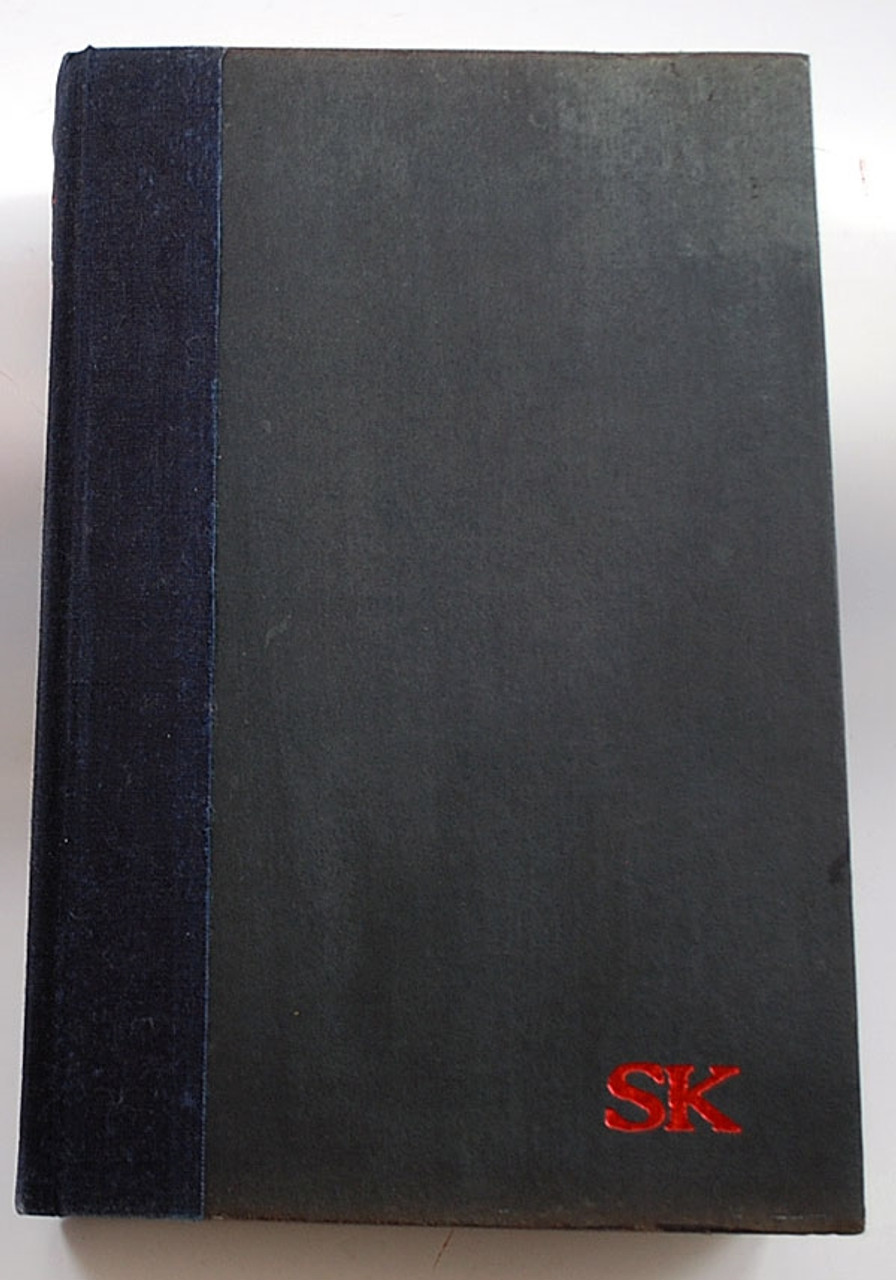 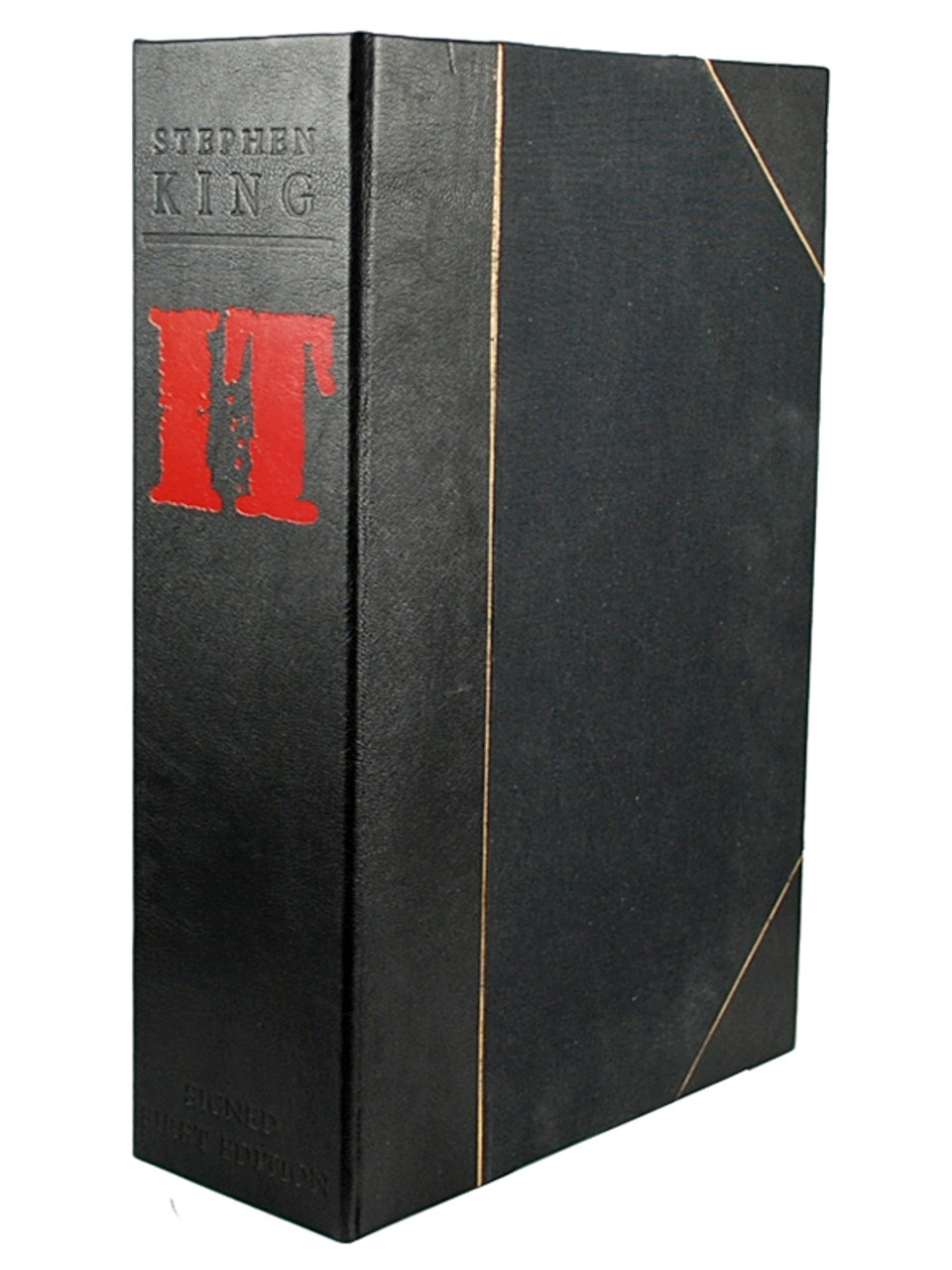 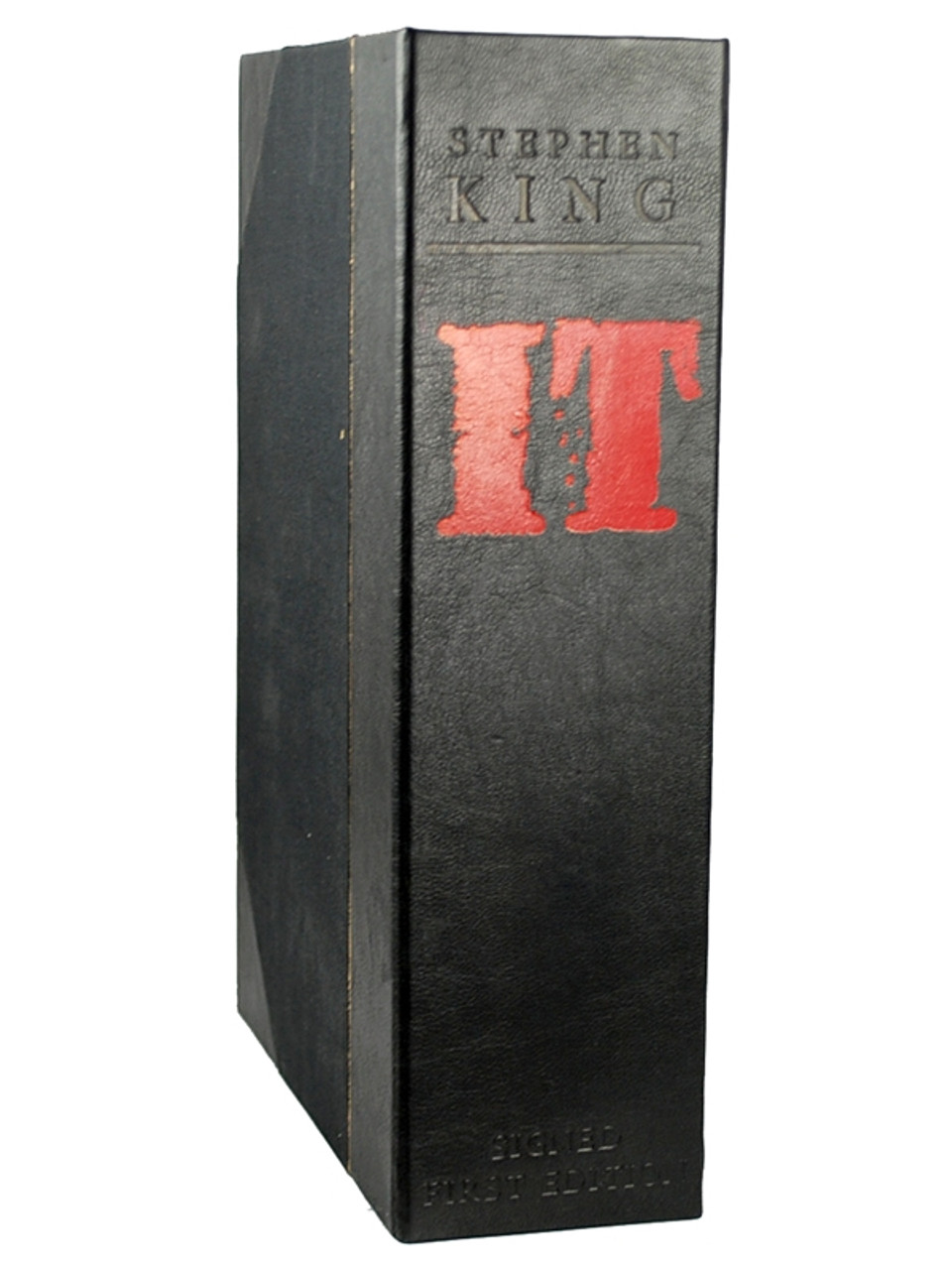 A rare and highly sought after Signed First Edition of IT, one of Stephen King's most popular classic novels. Signed first printing copies of this novel are quite scarce.

This collector's grade hardcover book has been signed by King along with a personal inscription on the first title page next to the VIKING logo:


"I worked on the book in a dream. I remember very little about the writing of it, except for the idea that I'd gotten hold of something that felt very big to me, and something that talked about more than monsters..." -Stephen King

From the back flap: In the biggest and most ambitious book of his career, Stephen King gives us not only his most towering epic of horror, but a surprising re-illumination of the corridor where we pass from the bright mysteries of childhood to those of maturity.

It’s a small city, a place as hauntingly familiar as your own hometown. Only in Derry the haunting is real….

It is a 1986 horror novel by American author Stephen King. The story follows the exploits of seven children as they are terrorized by the eponymous being, which exploits the fears and phobias of its victims in order to disguise itself while hunting its prey. "It" primarily appears in the form of a clown in order to attract its preferred prey of young children. The novel is told through narratives alternating between two time periods, and is largely told in the third-person omniscient mode. It deals with themes that eventually became King staples: the power of memory, childhood trauma, and the ugliness lurking behind a façade of traditional small-town values. The novel won the British Fantasy Award in 1987, and received nominations for the Locus and World Fantasy Awards that same year. Publishers Weekly listed It as the best-selling book in the United States in 1986.

The amazingly prolific King returns to pure horror, pitting good against evil as in The Stand and The Shining. Moving back and forth between 1958 and 1985, the story tells of seven children in a small Maine town who discover the source of a series of horrifying murders. Having conquered the evil force once, they are summoned together 27 years later when the cycle begins again. As usual, the requisite thrills are in abundance, and King's depiction of youngsters is extraordinarily accurate and sympathetic. But there is enough material in this epic for several novels and stories, and the excessive length and numerous interrelated flashbacks eventually become wearying and annoying. Nevertheless, King is a born storyteller, and It will undoubtedly be in high demand among his fans.

A wonderful bright clean copy in Near Fine+ condition. No bumped corners. Clean & straight boards with square and tight spine. Some edge-wear to extremities. No markings, writings, or stamps. No attached bookplates or indication of any removed. Red lettering graphics on spine mostly bright and clear. A couple of light marks to page edges. Some surface loss to the top right corner of front cover. Dust-jacket is very near fine, free of tears and with minimal edge-wear. Very mild tanning to dust jacket across the flap. A well-cared for book, protected from any potential damage. This book stands out as having had great care. The dust-jacket is now protected with a brand new archival Mylar sleeve.