Signed Deluxe Edition. Thank you for your interest in this special signed collector’s edition of “SLASH: The Collection”. Please check your email for upcoming news/updates. Expected ship date: Early Feb. 2023.

Personally signed by SLASH, one of the most influential Rock N' Roll guitar musicians.

LIMITED TO ONLY 1,000 SIGNED & NUMBERED COPIES 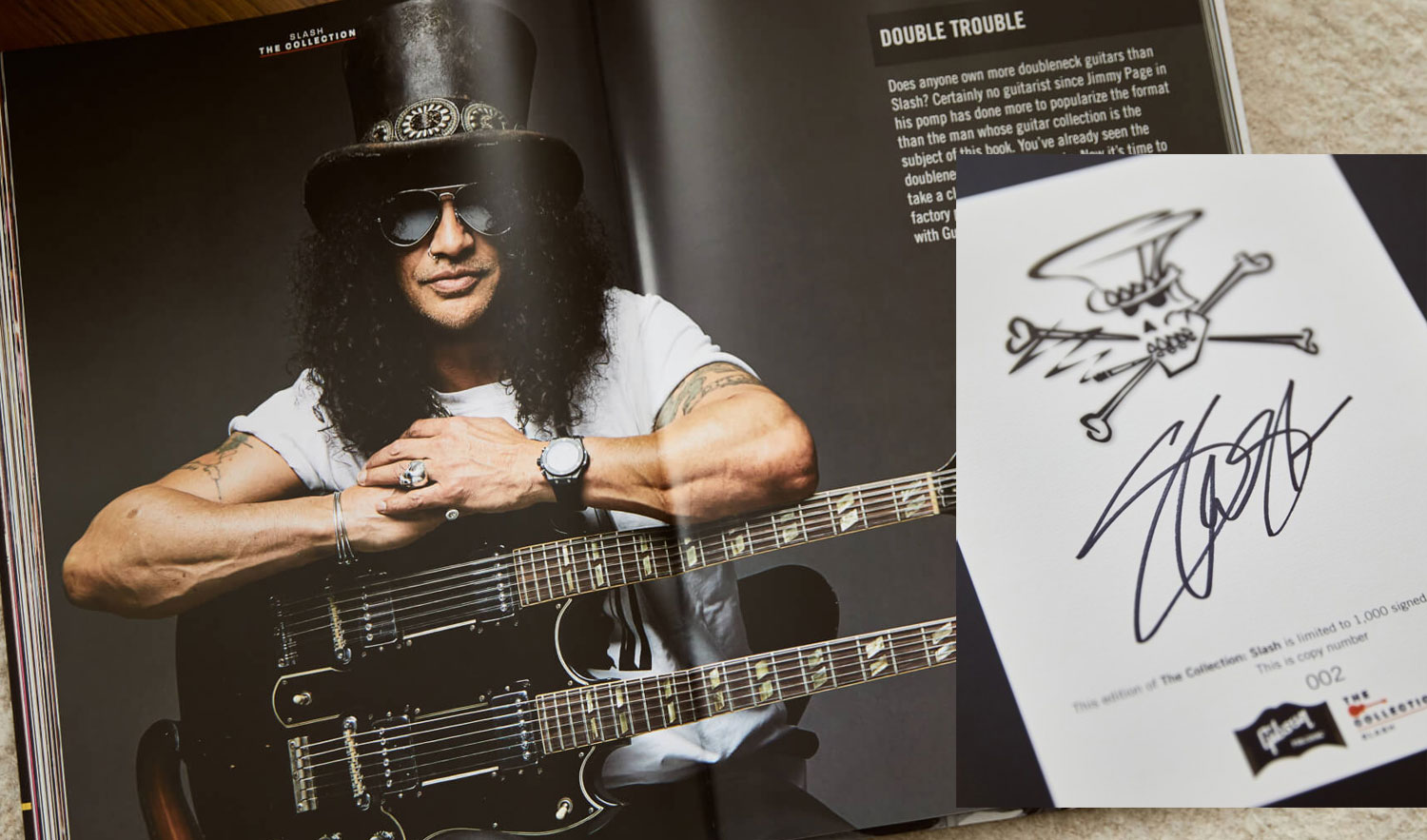 This edition is now OUT OF PRINT from the publisher.

“Launching Gibson Publishing in partnership with Slash for our debut book marks an important milestone for all of us at Gibson Brands.” – Gibson Brand President, Cesar Gueikian

This premium coffee table book explores in unprecedented detail the instruments Gibson Global Brand Ambassador and rock legend Slash has used on countless hit records and on stages worldwide, in front of millions of adoring fans.

Few artists have had as profound an impact on modern music as Slash. From Guns N’ Roses to Slash’s Snakepit, Velvet Revolver, and four acclaimed albums with Myles Kennedy & The Conspirators, Slash has brought his inimitable style and swagger to each project.

In the process, he has influenced countless guitarists and musicians across generations and genres — and has amassed a staggering collection of about 400 guitars, from holy-grail vintage pieces to prototype Gibson signature models, to guitars made by B.C. Rich®, Guild®, boutique acoustic luthiers, and plenty more besides.

These 364 pages are lavishly illustrated with photos of Slash and his impressive guitar collection, shot by the Gibson team and legendary rock photographer Ross Halfin, whose relationship with Slash extends back to 1986.

Does anyone own more doubleneck guitars than Slash? Certainly no guitarist since Jimmy Page in his pomp has done more to popularize the format than the man whose guitar collection is the subject of this book. You’ve already seen the doublenecks in Slash’s live rig. Now it’s time to take a close look at his 1966 Gibson alongside factory prototypes, instruments he developed with Guild®, and impossibly rare BC Rich® models. 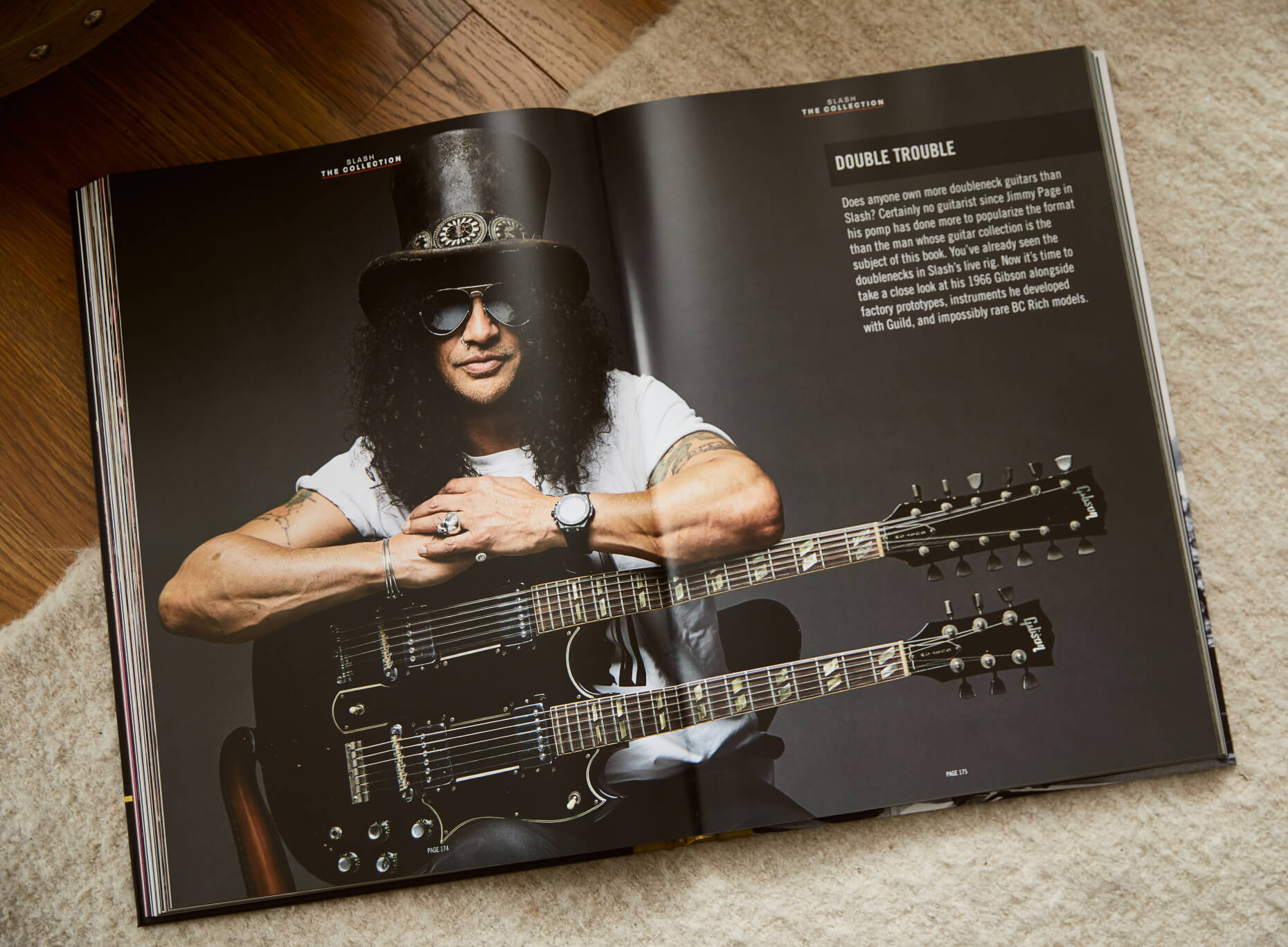 An original Gibson Explorer is almost impossible to find. Once upon a time, Slash owned two of them. “When I went into the studio to record Use Your Illusion, I picked up two ’58 Explorers,” Slash recalls. “I gave one of them to my guitar tech at the time, only to find out later that he’d sold it. That’s one of my very, very few regrets in life!” The Explorer that Slash kept came with paperwork, some old parts, and a photograph of the guitar’s original owner. 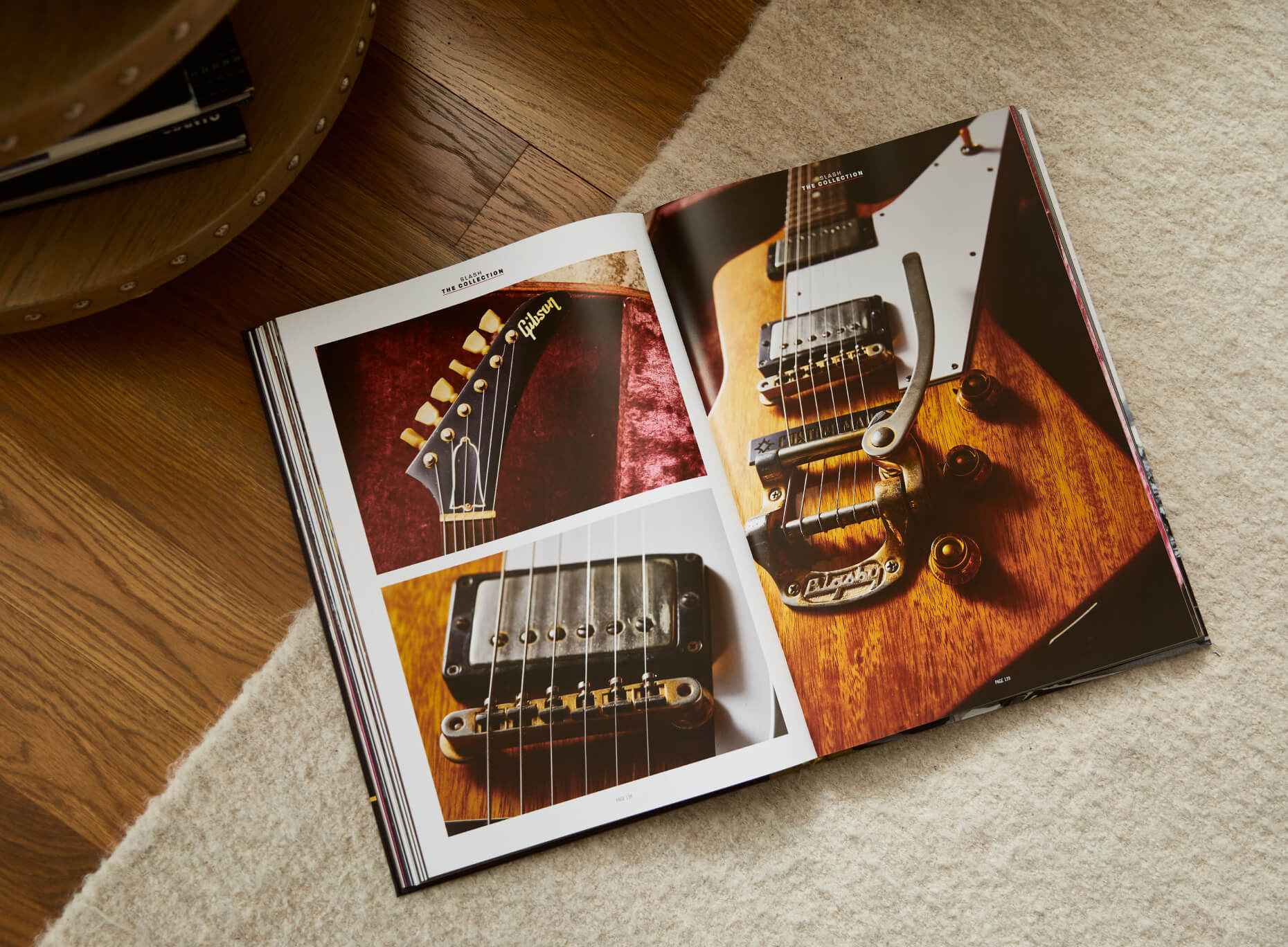 Gibson’s ledgers show that the first two Les Paul Standards with Burst specifications — most importantly, the combination of PAF humbuckers and a Cherry Sunburst finish — left the factory on May 28, 1958 bound for the company’s then owners, CMI in Chicago.

Thanks to an only slightly off-center join, the two-piece top on Slash’s guitar proved better suited to the new finish. Aesthetically, it’s every inch a classic. “For a Les Paul guy like me, it was a must-have,” says Slash. 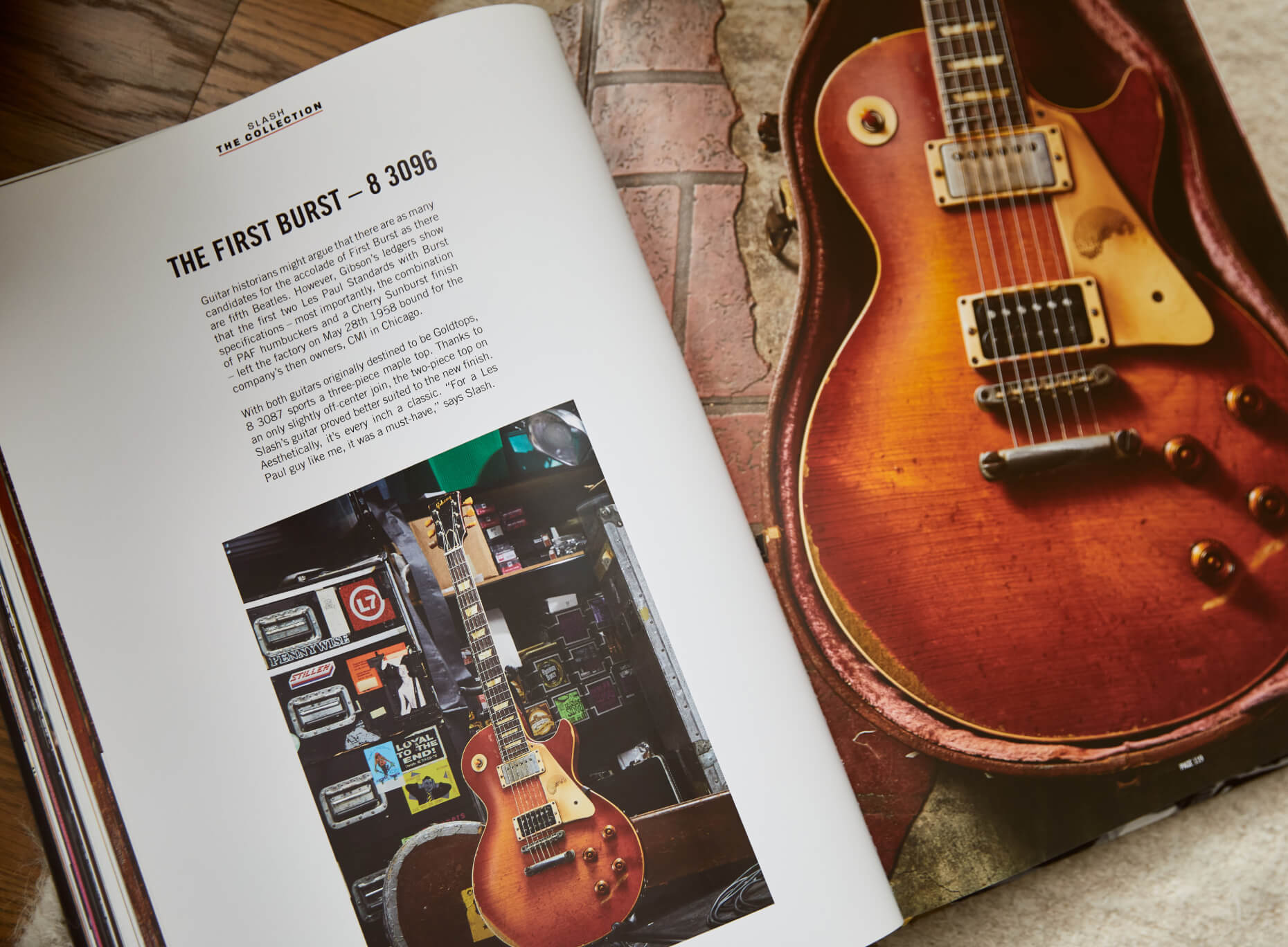 “This guitar has been with me since 1988,” says Slash when asked about the Les Paul Standard that’s been his number-one live guitar for more than three decades. “It’s faded, I dropped a cigarette on it... I named it when I was drunk but I don’t remember what the catalyst for that was!”

Mostly used live for Appetite For Destruction songs and a handful from the Use Your Illusion era, Slash says Jessica “still has a very specific sound compared to all the other Les Pauls I have.” 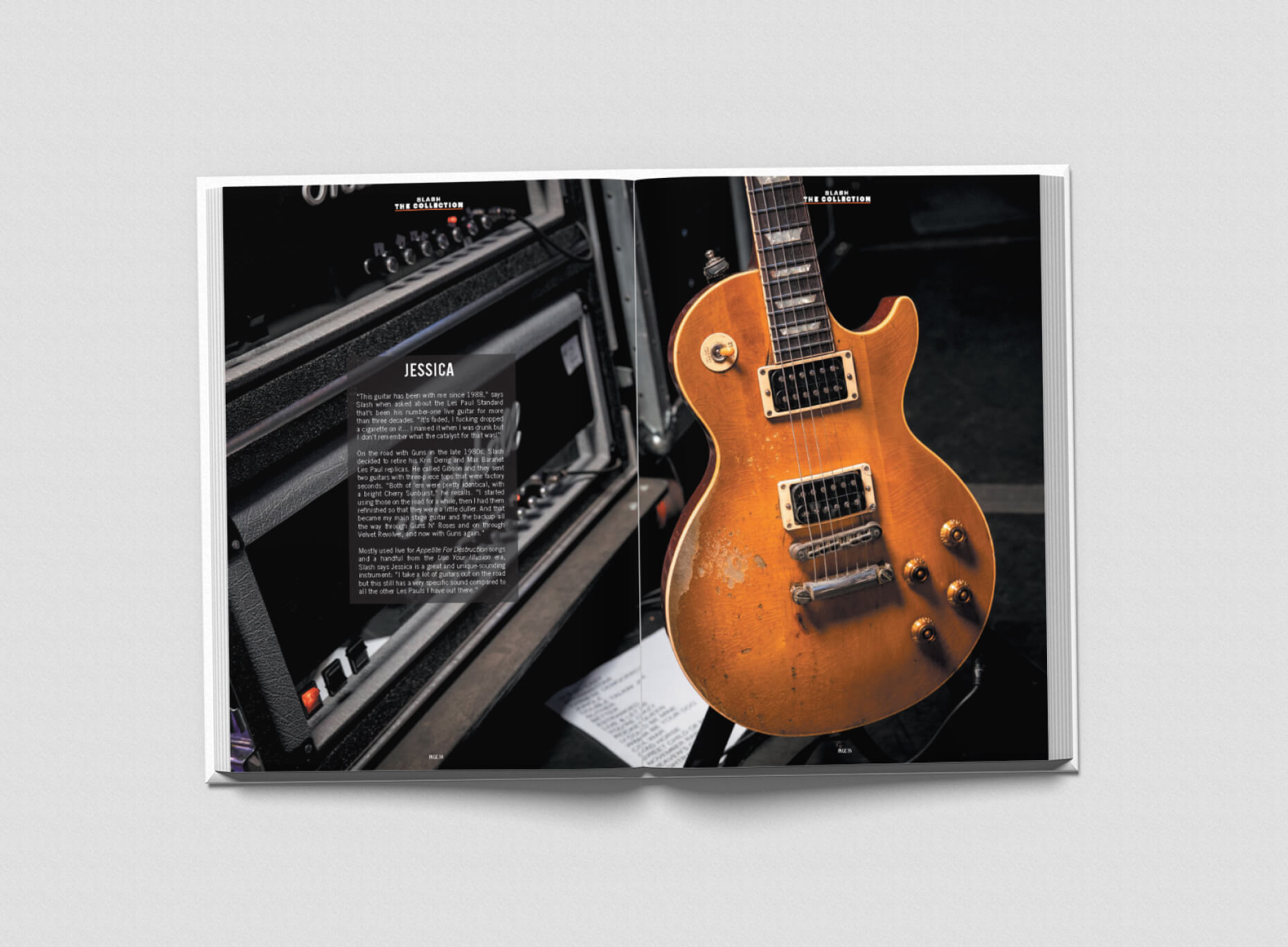 Here’s another gorgeous original 1959 Les Paul Standard that’s very close in serial number to Slash’s go-to Burst. It’s also similar in appearance, with perhaps just a little more fading on some areas of the top. “The attack is totally different,” says Slash when we ask what plugging in an original Burst is like when compared to one of his Gibson signature models. “You don’t play it as hard. And it has certain nuances that you really want to stick out, so maybe you play it a little cleaner.” 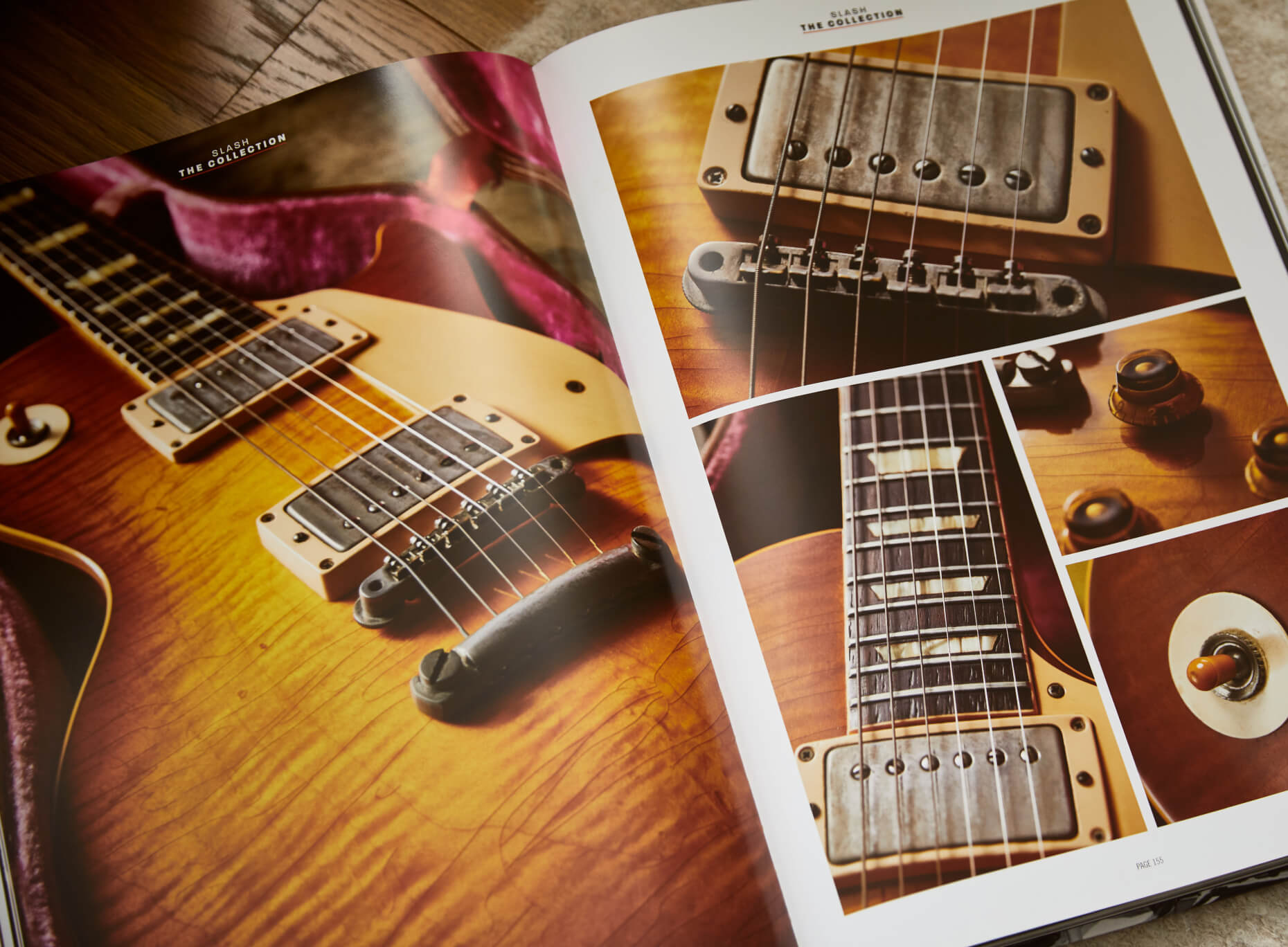 From his Snakepit model in the mid-1990s (pictured) to the modern-day Gibson and Epiphone Slash Collections, every Slash signature instrument is a work of art that has been developed under the watchful eye of the man himself. And, as you can see from the wear and tear on Slash’s guitars, they get put through their paces and played hard. 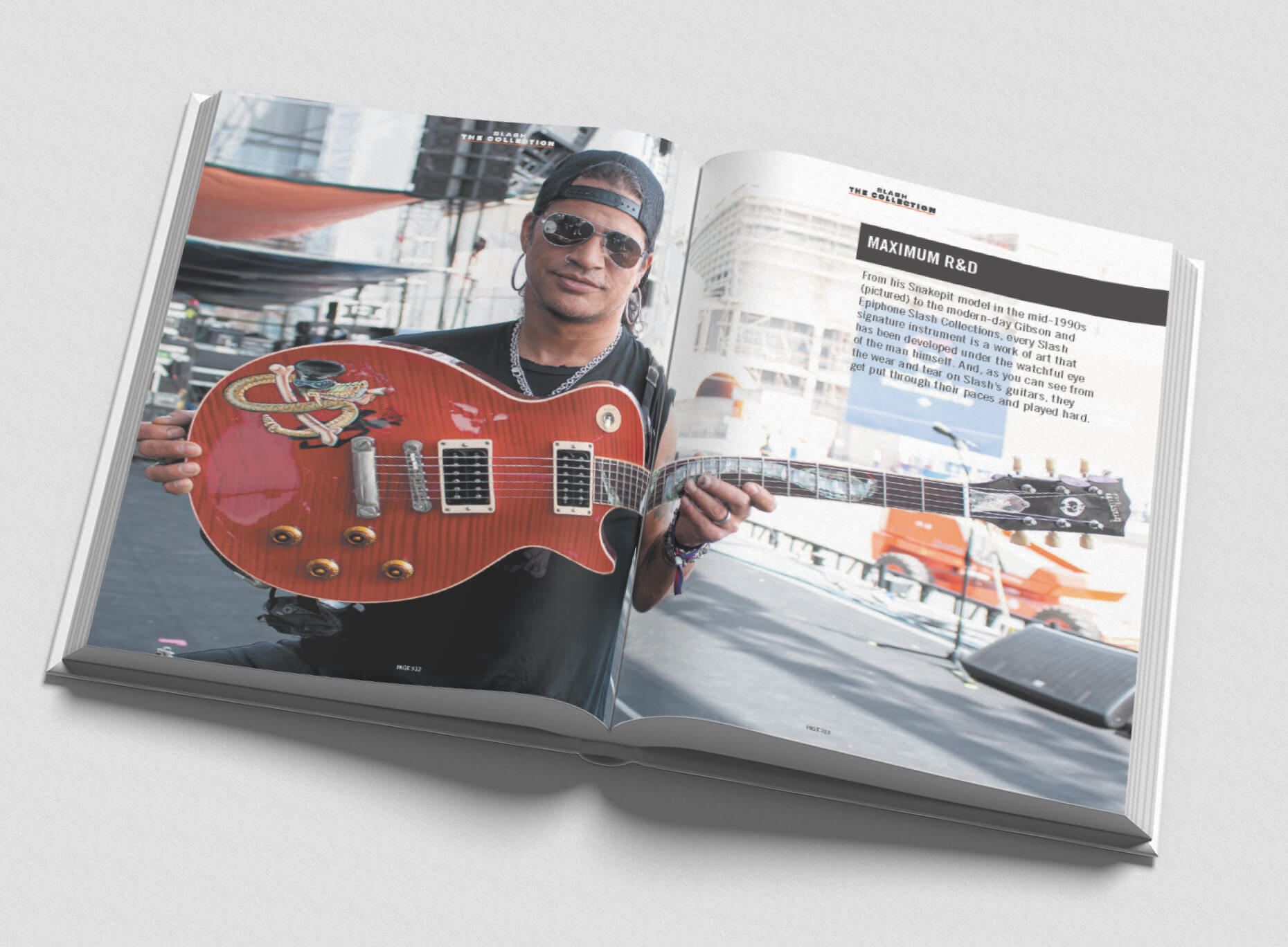 Gibson Publishing, headquartered in Nashville, Tennessee, is the next major step from Gibson Brands, contributing to the evolution of collaborative artist partnerships and promoting music and music-related topics to fans worldwide. As with the recently launched Gibson Records, the first project for Gibson Publishing is a collaboration with Gibson Global Brand Ambassador and rock legend, Slash.

Launching simultaneously with the Slash episode of Gibson TV’s popular series of the same name, The Collection: Slash is a premium coffee table book that explores in unprecedented detail the instruments Slash has used on countless hit records on stages worldwide, in front of millions of adoring fans. While Slash’s association with the Gibson Les Paul™ is well known, Les Pauls are only part of the story. Over the years, Slash has amassed a staggering collection of about 400 instruments, from holy grail vintage pieces to prototype Gibson signature models to guitars made by B.C. Rich®, Guild®, boutique acoustic luthiers, and plenty more besides.

The Deluxe Edition of The Collection: Slash is presented in a slipcase and measures 240 x 340 mm (9.45 x 13.39”). It includes a cover poster, four guitar art prints, and a certificate of authenticity. The initial print run of the Deluxe Edition is hand-signed by Slash and is limited to 1,000 copies.

Over 300 pages in length, The Collection: Slash is lavishly illustrated with numerous photos of the guitarist and his impressive guitar collection, shot by the Gibson team and legendary rock photographer Ross Halfin, whose relationship with Slash extends back to an early Guns N’ Roses portrait session from 1986. Accompanying the imagery will be insights drawn from brand new, exclusive interviews with Slash himself.

Written and edited by Gibson editor-in-chief Chris Vinnicombe, The Collection: Slash is a must-have for both Slash fans and those who admire fine guitars.

Gibson Publishing is committed to sustainable and environmentally conscious publishing and uses FSC-certified and recycled materials wherever possible.