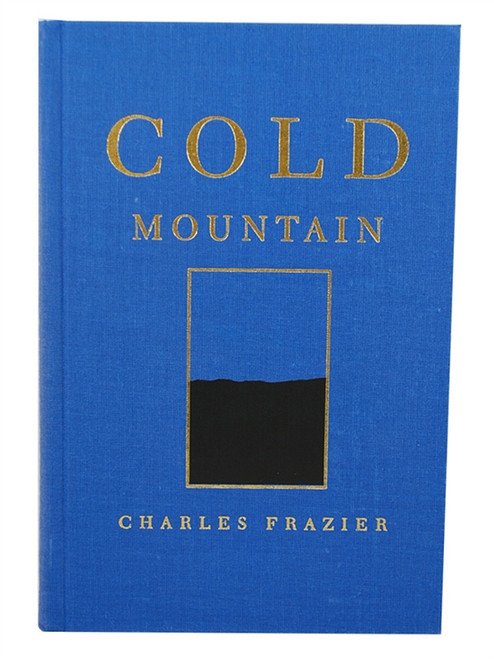 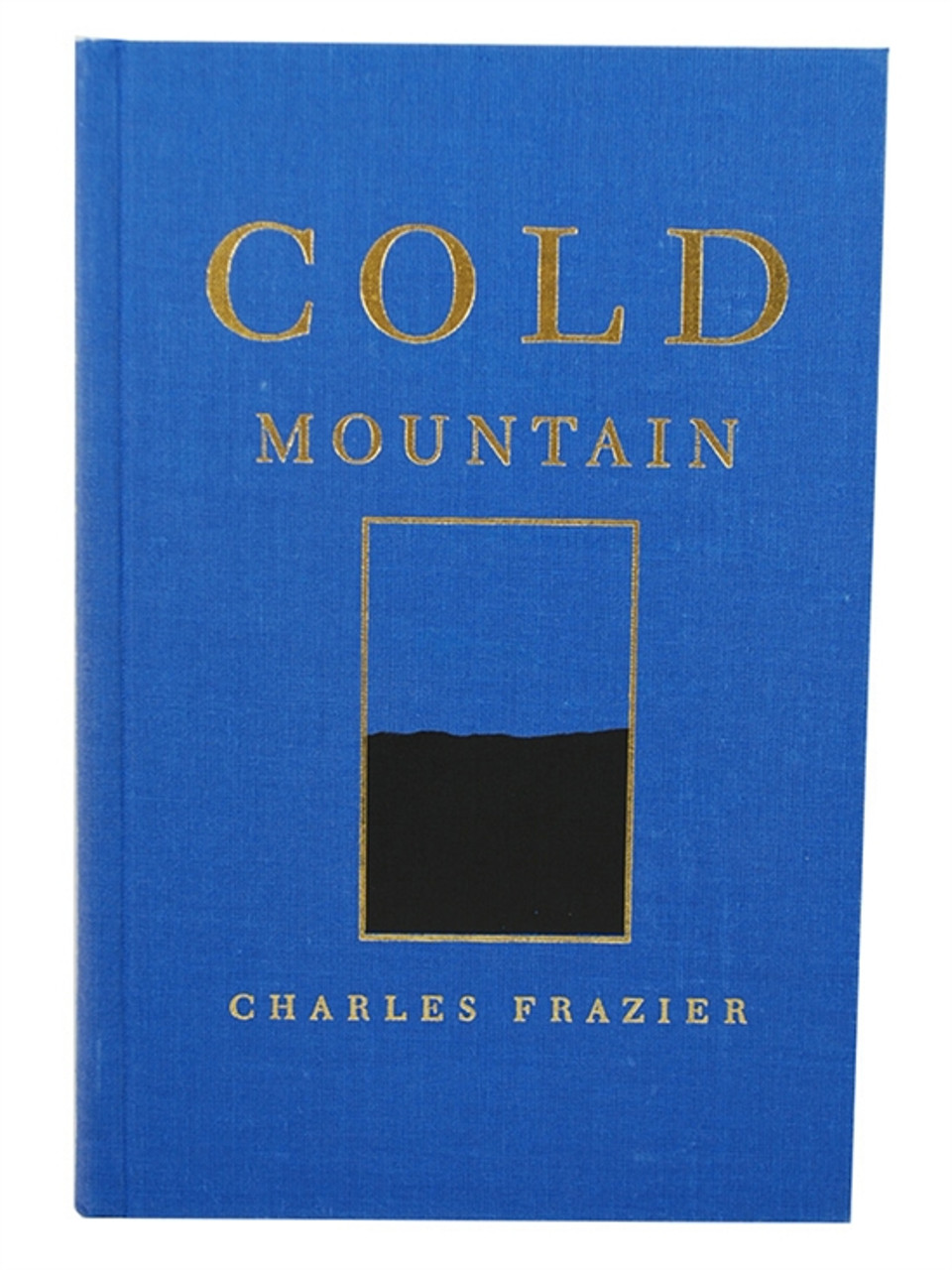 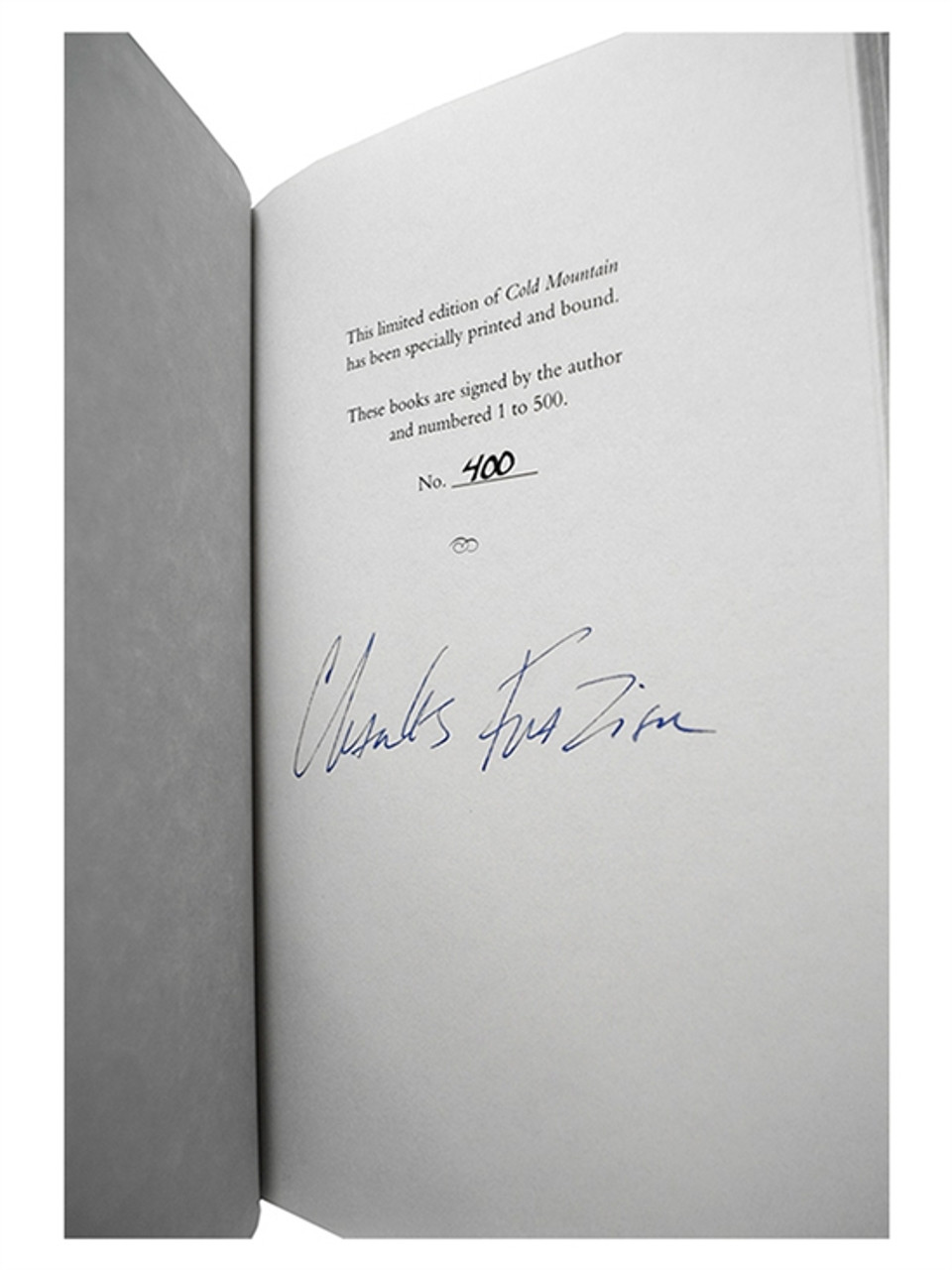 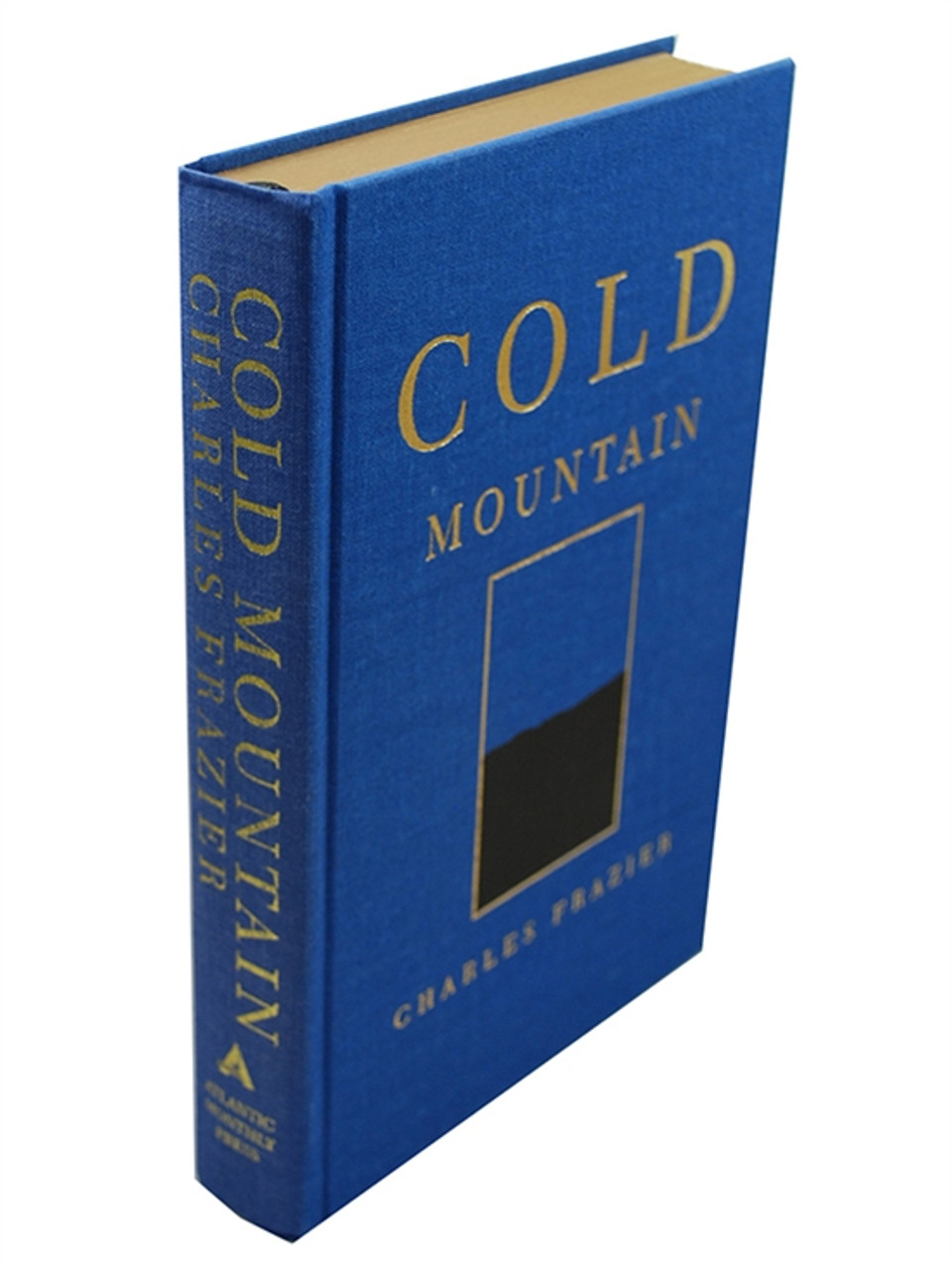 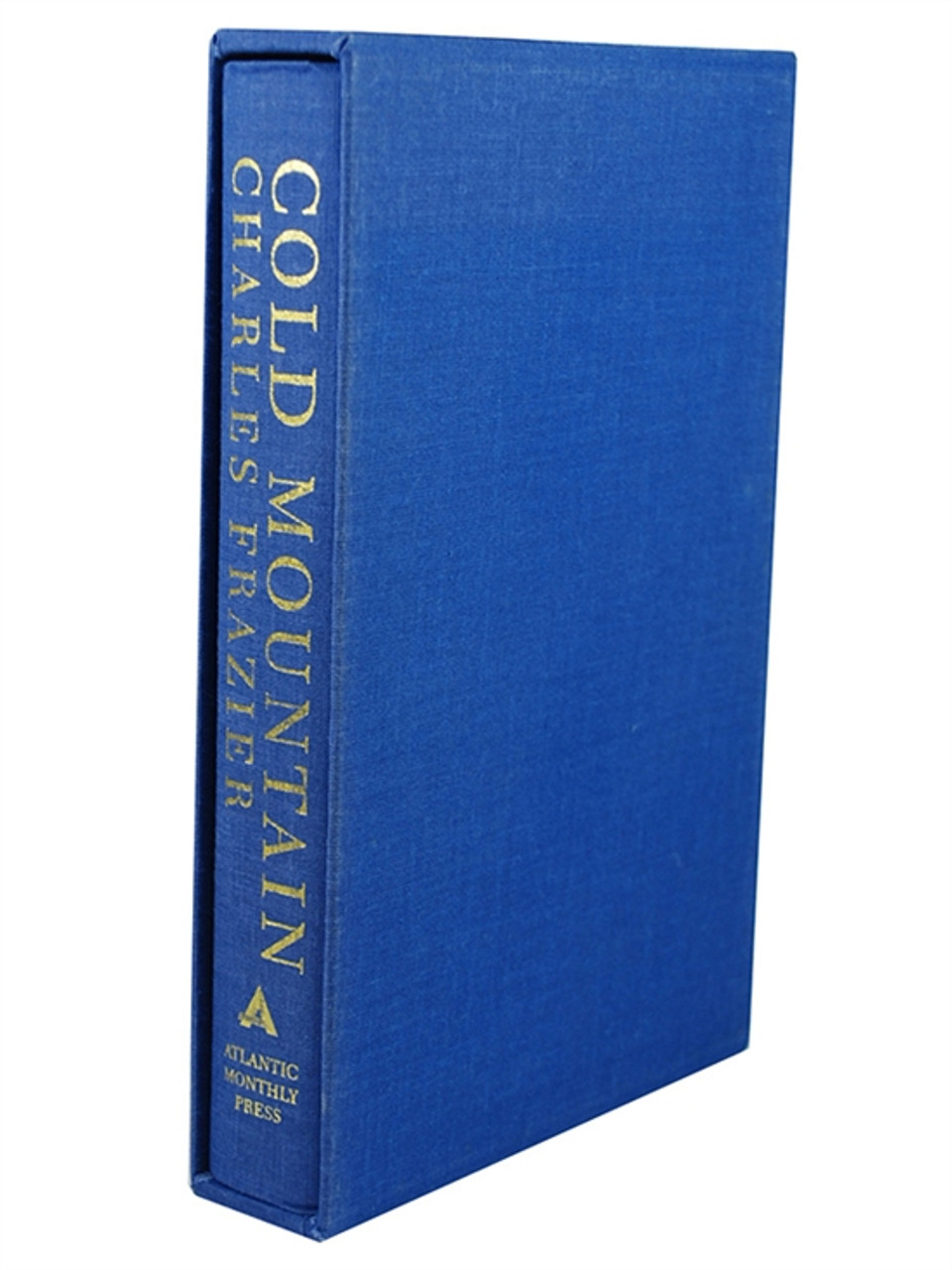 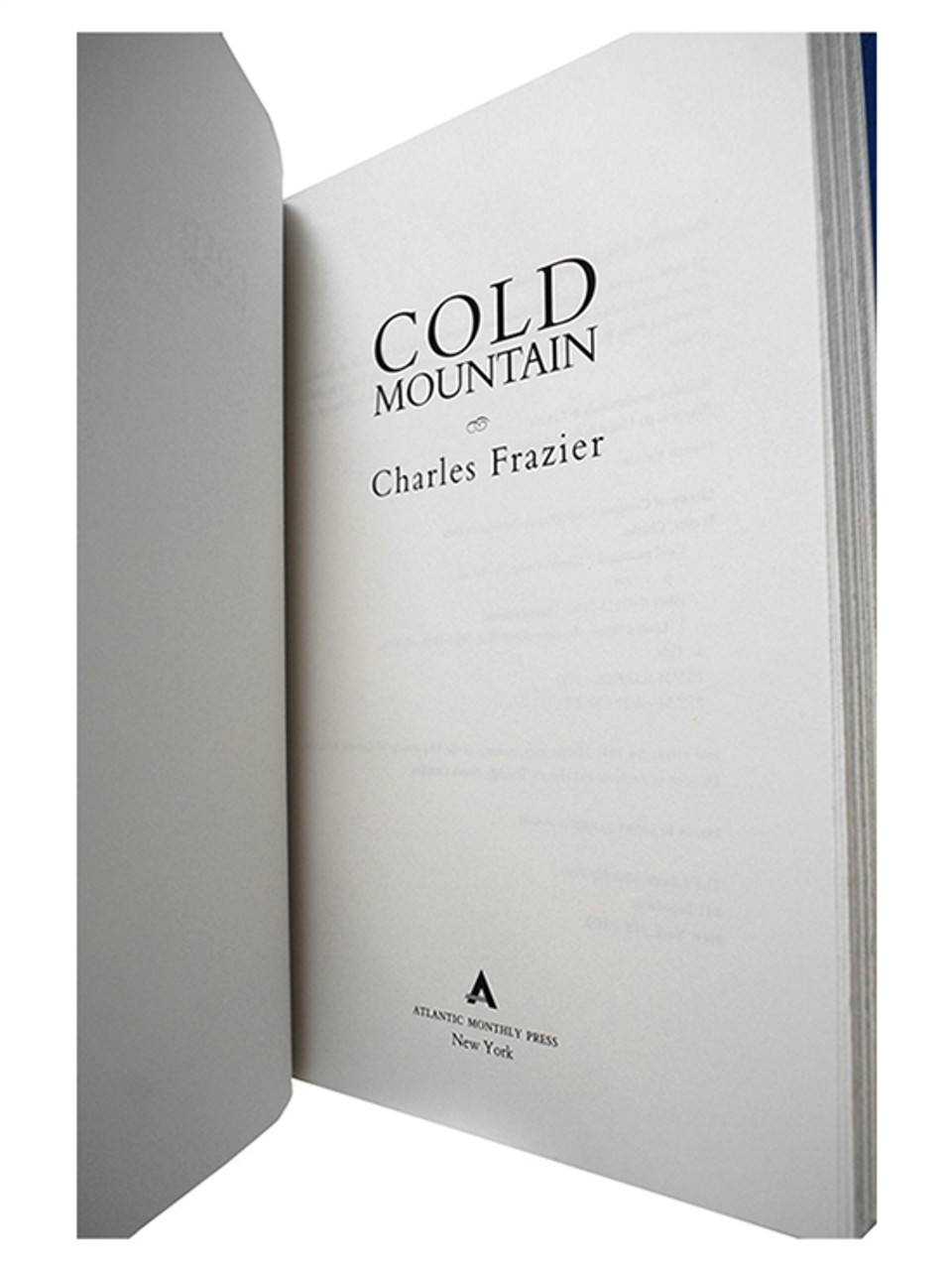 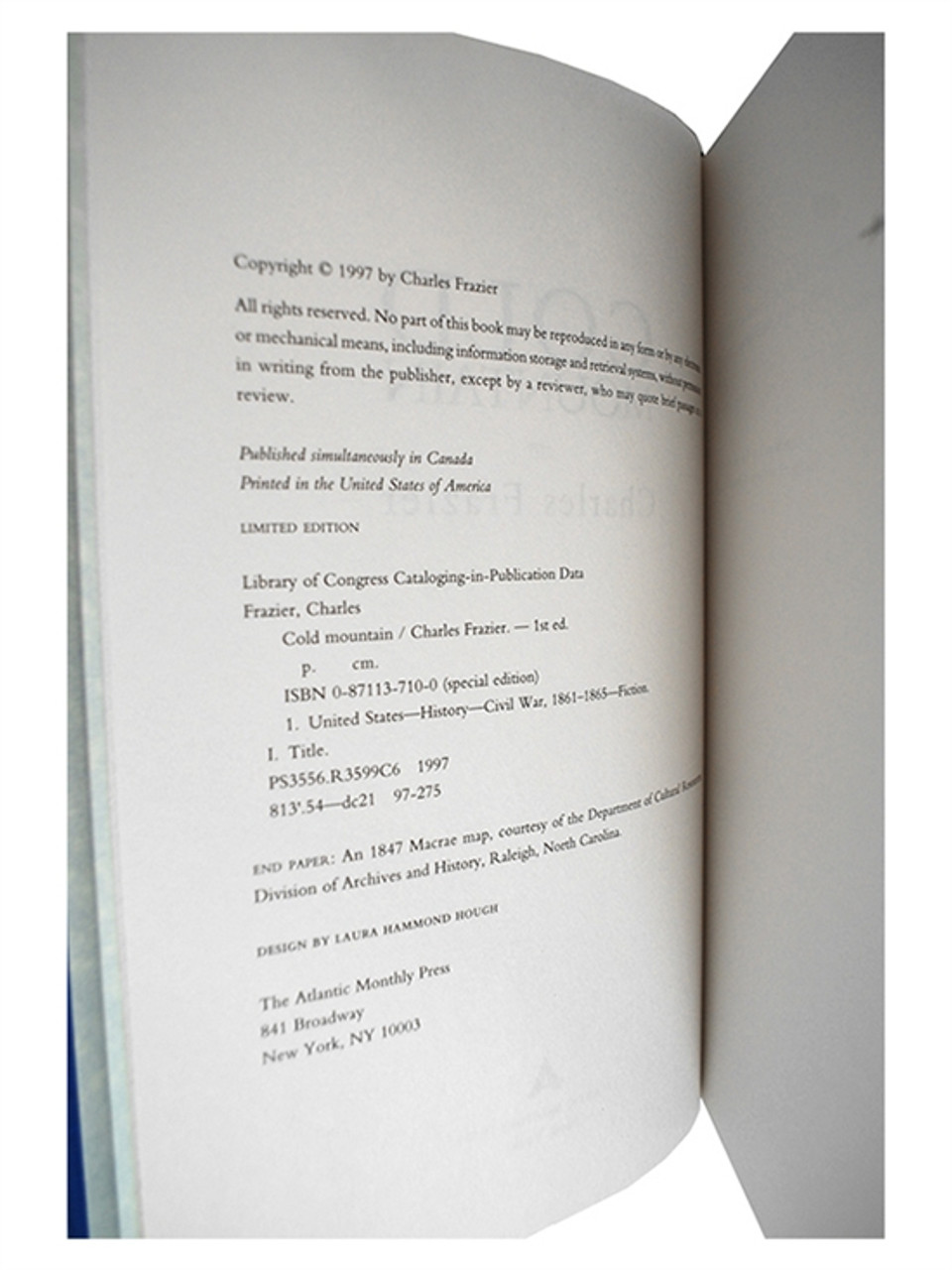 New York: Atlantic Monthly, 1997. Hardcover. Limited Edition in slipcase (issued without dust jacket). The limitation page states, 'This limited edition of 'Cold Mountain' has been specially printed and bound. These books are signed by the author and numbered 1 to 500. Very Fine condition in cloth slipcase the same.

This novel won the 1997 National Book Award. It also won the W.D. Weatherford Award that year.

It was later adapted for the screen by director Anthony Minghella in the 2003 film Cold Mountain, starring Jude Law, Nicole Kidman, and Ren�e Zellweger. The film was nominated for seven Academy Awards, including Best Actor for Jude Law, and won the Oscar for Best Supporting Actress for Ren�e Zellweger.

Cold Mountain is a 1997 historical fiction novel by Charles Frazier. It tells the story of W. P. Inman, a wounded deserter from the Confederate army near the end of the American Civil War who walks for months to return to Ada Monroe, the love of his life; the plot shares several similarities with Homer's The Odyssey. The novel alternates chapter-by-chapter between Inman's and Ada's stories. It was Charles Frazier's first novel and a major bestseller, selling roughly three million copies worldwide. It was also adapted into an award-winning film of the same name.

The New York Times Book Review, James Polk
For a first novelist, in fact for any novelist, Charles Frazier has taken on a daunting task--and has done extraordinarily well by it. In prose filled with grace notes and trenchant asides, he has reset much of the Odyssey in 19th-century America near the end of the Civil War.

Newsweek
Novelists are never in short supply. Natural-born storytellers come along only rarely. Charles Frazier joins the ranks of that elite cadre on the first page of his astonishing debut.

Raleigh News and Observer
This is one of the best books I have ever opened....Cold Mountain is as close to a masterpiece as American writing is going to come these days.

Rick Bass
This novel is so magnificent -- in every conceivable aspect, and others previously unimagined -- that it has occurred to me that the shadow of this book, and the joy I received in reading it, will fall over every other book I ever read....Cold Mountain is one of the great accomplishments in American literature.

Ann Beattie
Charles Frazier's novel is at once spare and eloquent, a panorama that the author stills long enough to make a portrait -- a very evocative portrait of Inman, a soldier who is trying to escape a ruined world. Interspersed with so many moments of sadness, the many moments of compassion seem entirely convincing and are very affecting; when Ada `wanted to tell him how she had come to be what she was,' the understatement -- as it is so often in Cold Mountain -- is almost shattering. And then comes the ending.

His first novel, Cold Mountain (Atlantic Monthly Press, 1997. ISBN 0-87113-679-1), traces the journey of Inman, a wounded deserter from the Confederate army near the end of the American Civil War. The work is rich in the culture and sensibilities of the North Carolina mountains and is based on local history and stories handed down by Frazier's father about Frazier's great-great-uncle William Pinkney Inman.. Inman, who was from the area around Cold Mountain in western North Carolina, served in the Confederate Army from which he deserted after being wounded twice and is reputedly buried in a local cemetery. The real Inman served as a private in Company F of the 25th North Carolina Infantry, and his regiment did participate in the fighting in the Siege of Petersburg, including the Battle of the Crater.[citation needed]

The novel won the 1997 National Book Award and was adapted as a film of the same title by Anthony Minghella in 2003.

Very Fine in a Very Fine slipcase without any discernible flaws.

A luxurious leather bound edition, personally signed by one of the greatest NBA players, Walt "Clyde" Frazier.Easton Press, Norwalk, CT. 2007. Walt Frazier with Dan Markowitz "The Game Within The...

“[A] visceral, nihilistic thriller….Ahlborn’s impressive writing and expert exploration of the psychological effects of systemic abuse elevate what could have been the literary equivalent of a...