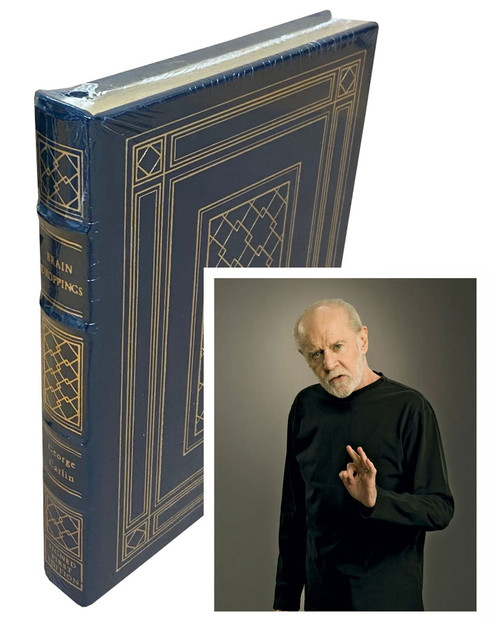 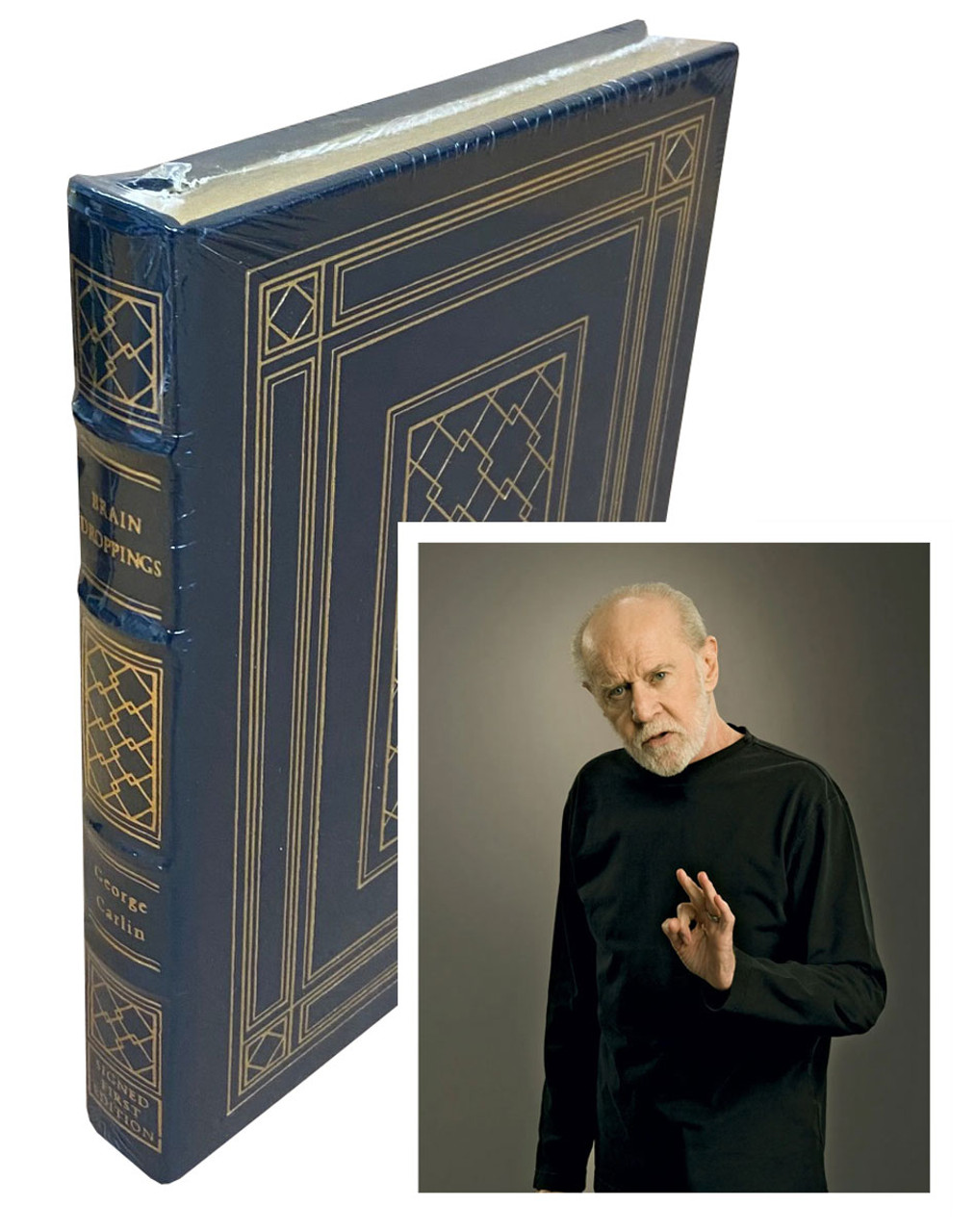 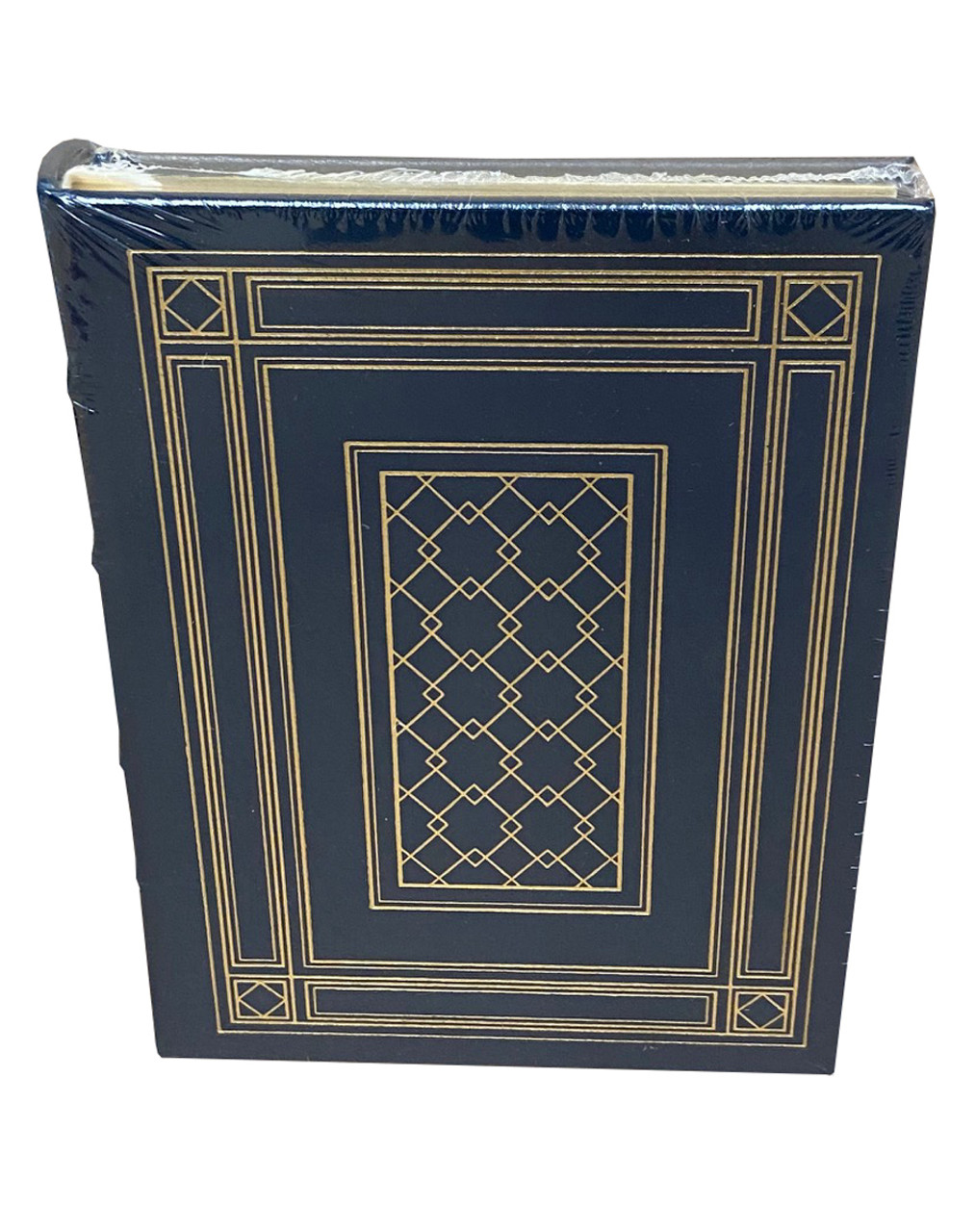 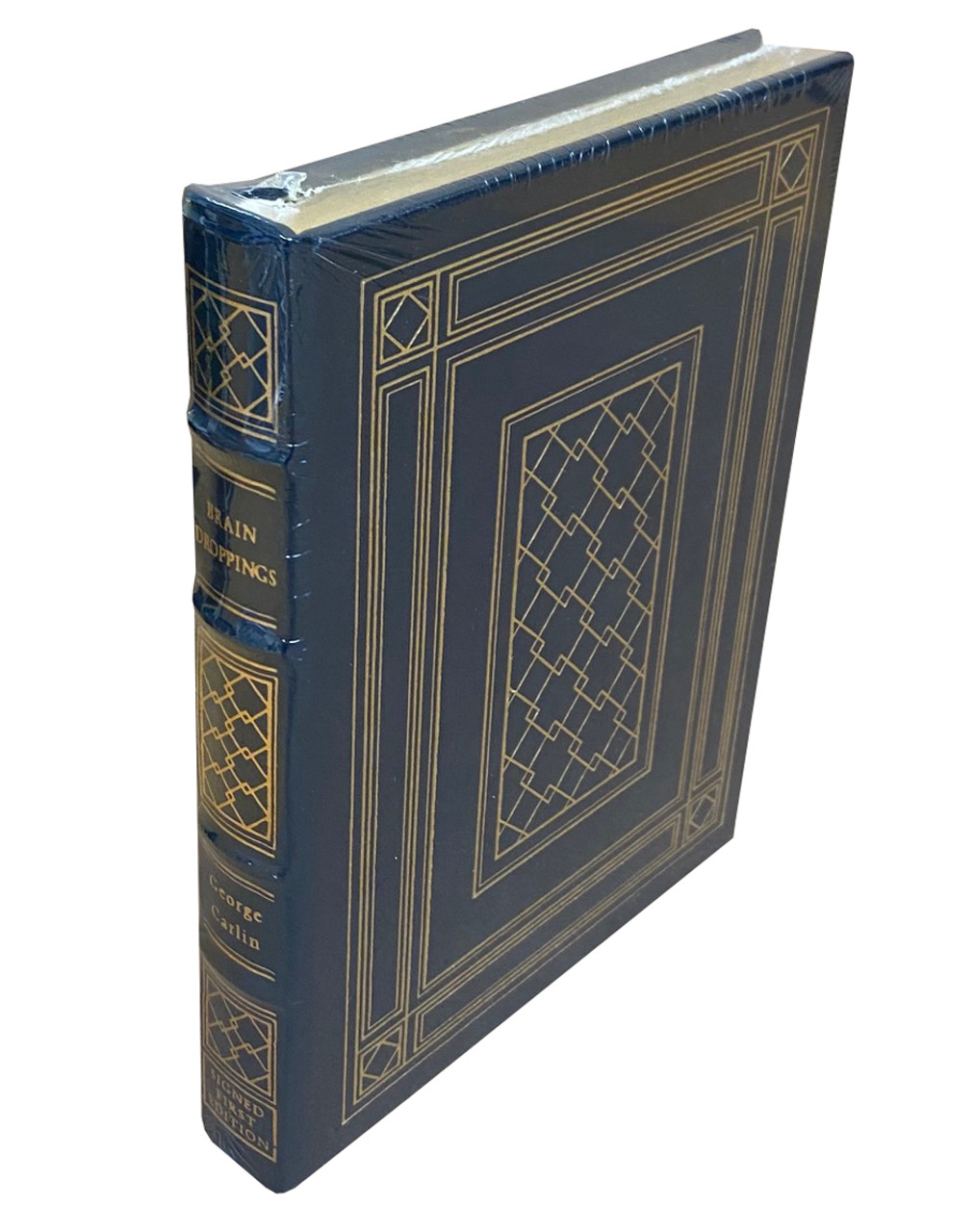 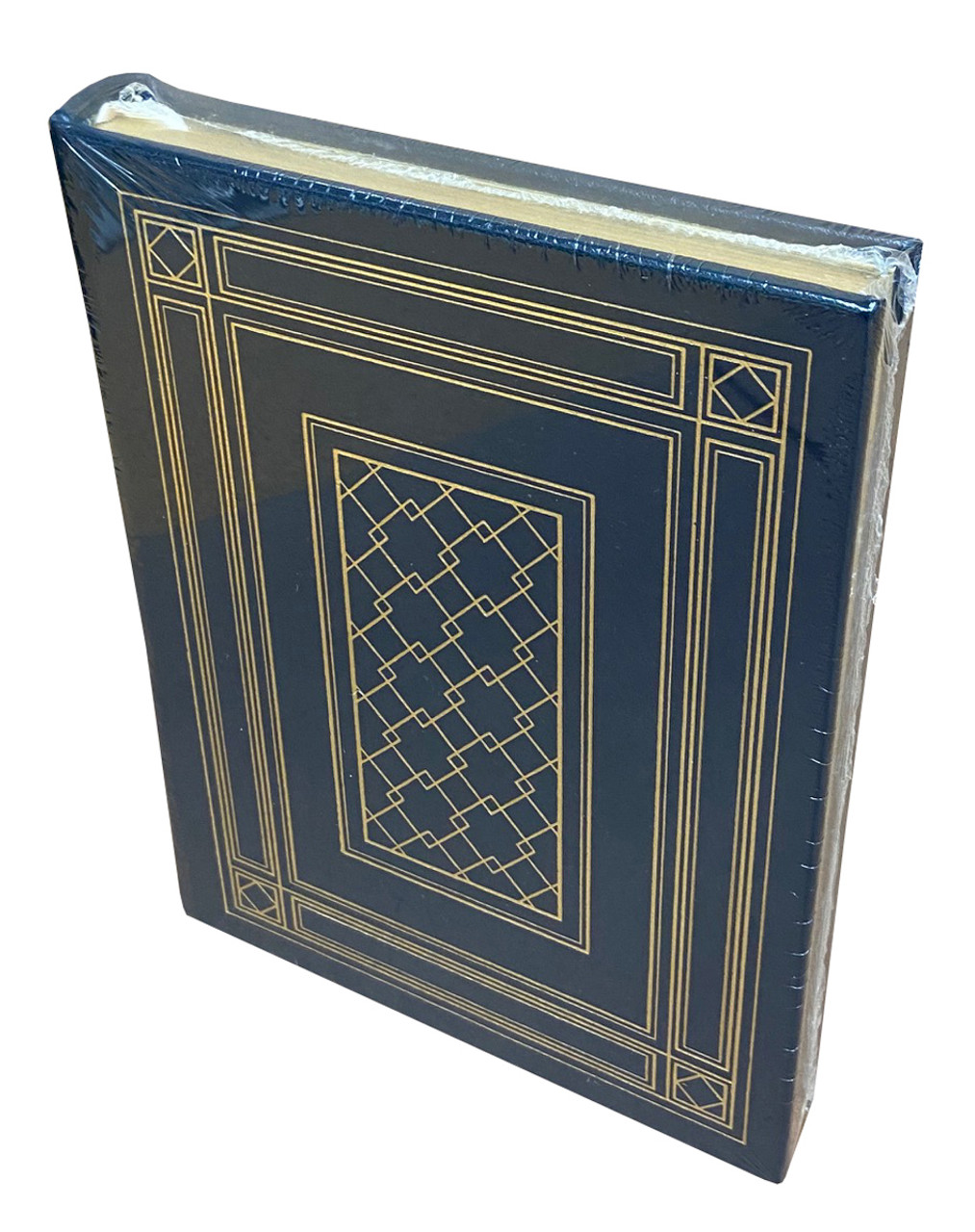 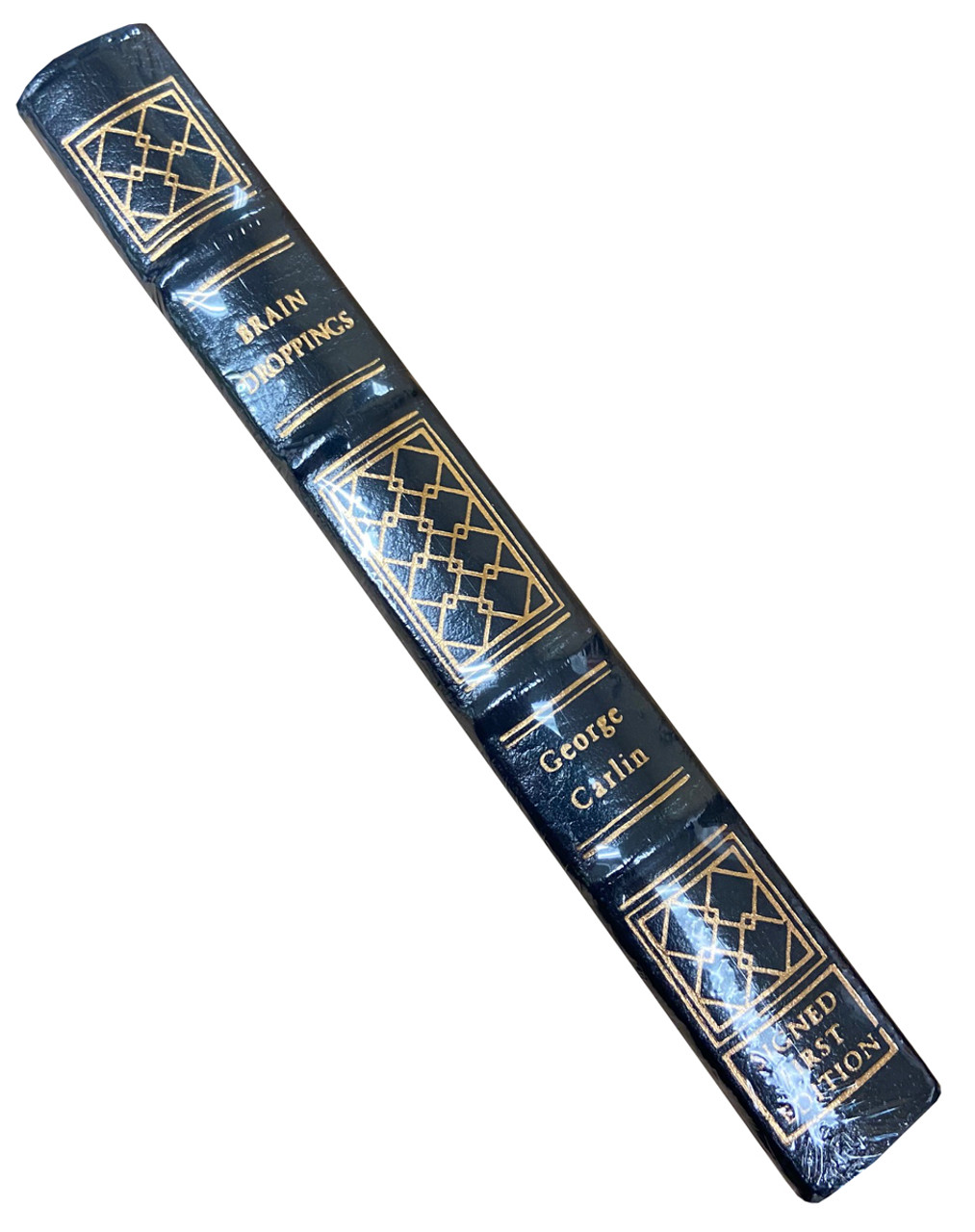 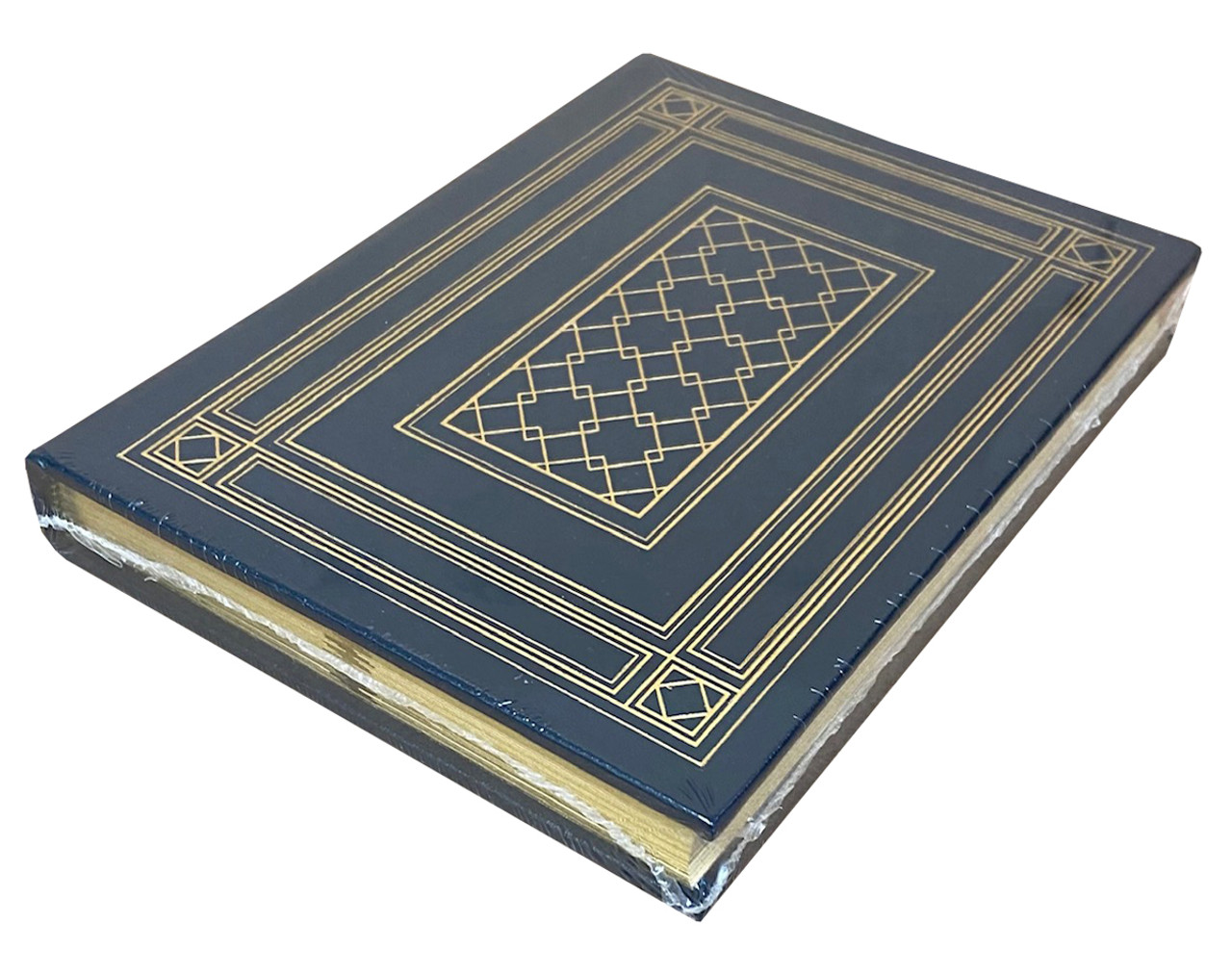 Personally Signed by George Carlin, regarded as one of the most important and influential stand-up comics of all time

Signed First Edition of only 1,100 with COA - Signed & Numbered Edition. 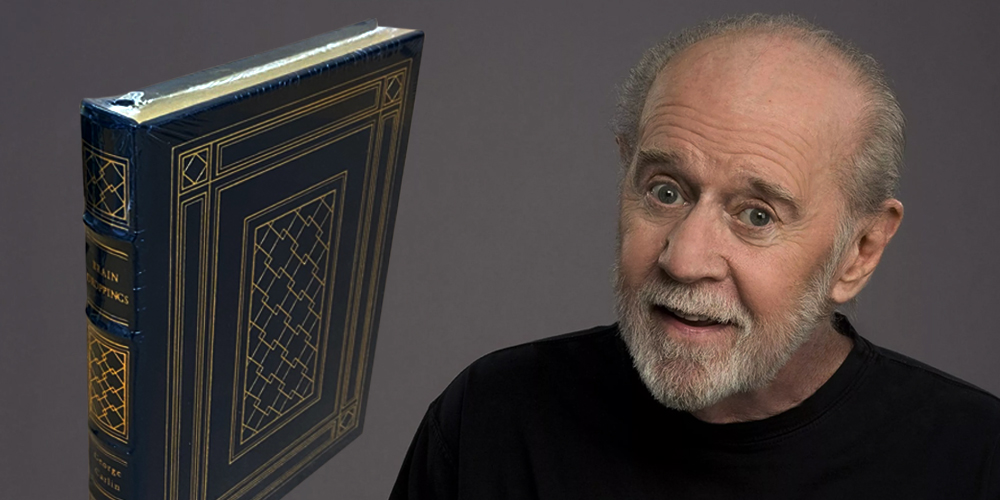 George Carlin, author of three bestsellers, has released twenty-three comedy albums; appeared in sixteen feature films; written and performed fourteen HBO specials; received four Grammy Awards; and been nominated for five Emmy Awards. He was the recipient of the American Comedy Awards Lifetime Achievement Award and was recently named the recipient of the Mark Twain Prize for American Humor.

Brain Droppings is a 1997 book by comedian George Carlin. This was Carlin's "first real book" and contains much of Carlin's stand-up comedy material. According to the cover, the book contains "jokes, notions, doubts, opinions, questions, thoughts, beliefs, assertions, assumptions, and disturbing references" and "comedy, nonsense, satire, mockery, merriment, sarcasm, ridicule, silliness, bluster, and toxic alienation". For longtime Carlin fans, the book also contains complete versions of two of his most famous monologues, "A Place for My Stuff" and "Baseball and Football".

Writer and television commentator Mike Barnicle supposedly lifted material from the book, without accreditation, and presented it as his own. He denied having read the book, but footage of Barnicle praising the book and saying "There's a yuk on every page" turned up. Barnicle was suspended for the action.

In August 1998, Hyperion published a 1999 calendar containing quips and quotes from the book.

In May 2000, the book was published as an audiobook by HighBridge,[1] in both CD and cassette tape formats. The audiobook received a Grammy award, Carlin's third, in February 2001.

George Denis Patrick Carlin (May 12, 1937 – June 22, 2008) was an American stand-up comedian, actor, social critic and author. Regarded as one of the most important and influential stand-up comics of all time, he was dubbed "the dean of counterculture comedians". He was known for his dark comedy and reflections on politics, the English language, psychology, religion and taboo subjects. His "seven dirty words" routine was central to the 1978 United States Supreme Court case F.C.C. v. Pacifica Foundation, in which a 5–4 decision affirmed the government's power to censor indecent material on the public airwaves.

The first of Carlin's 14 stand-up comedy specials for HBO was filmed in 1977. From the late 1980s, his routines focused on sociocultural criticism of American society. He often commented on American political issues and satirized American culture. He was a frequent performer and guest host on The Tonight Show during the three-decade Johnny Carson era and hosted the first episode of Saturday Night Live in 1975. His final comedy special, It's Bad for Ya, was filmed less than four months before his death from cardiac failure. In 2008, he was posthumously awarded the Mark Twain Prize for American Humor. In 2004, he placed second on Comedy Central's list of top 10 American comedians. In 2017, Rolling Stone magazine ranked him second (behind Richard Pryor) on its list of the 50 best stand-up comedians of all time.

His film roles included a taxi driver in Car Wash, Frank Madras in Outrageous Fortune, Rufus in Bill & Ted's Excellent Adventure and Bill & Ted's Bogus Journey, Eddie Detreville in The Prince of Tides, Cardinal Ignatius Glick in Dogma, Architect in Scary Movie 3, and Bart Trinké in Jersey Girl. He did voice-over roles as Zugor in Tarzan II, Fillmore in Cars and narrated the first four seasons in the American dub of the British children's television show Thomas & Friends. 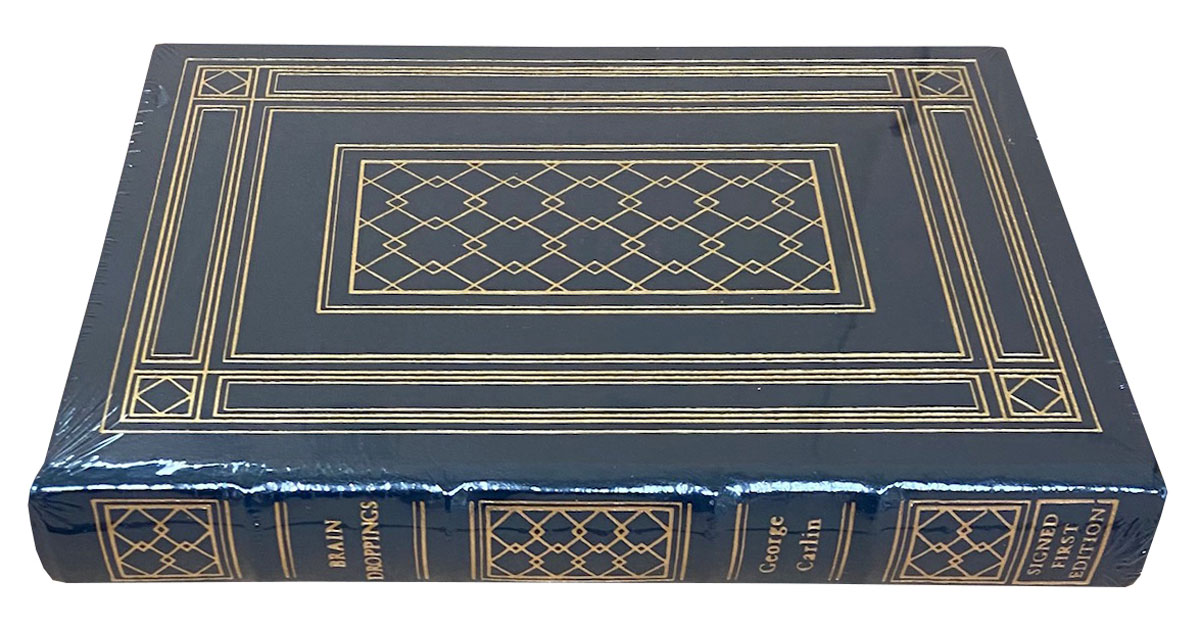