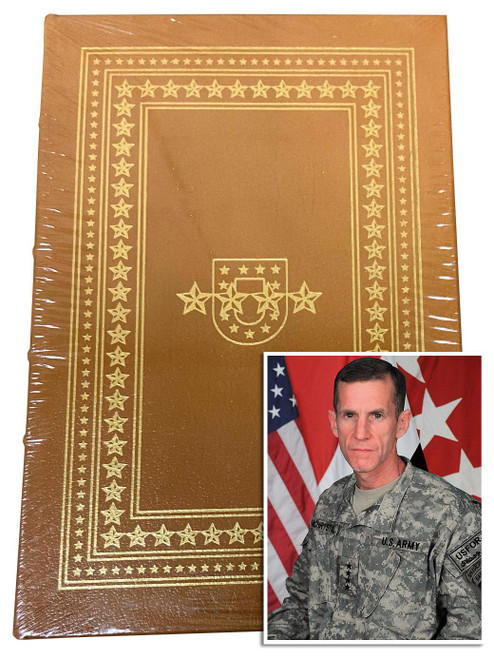 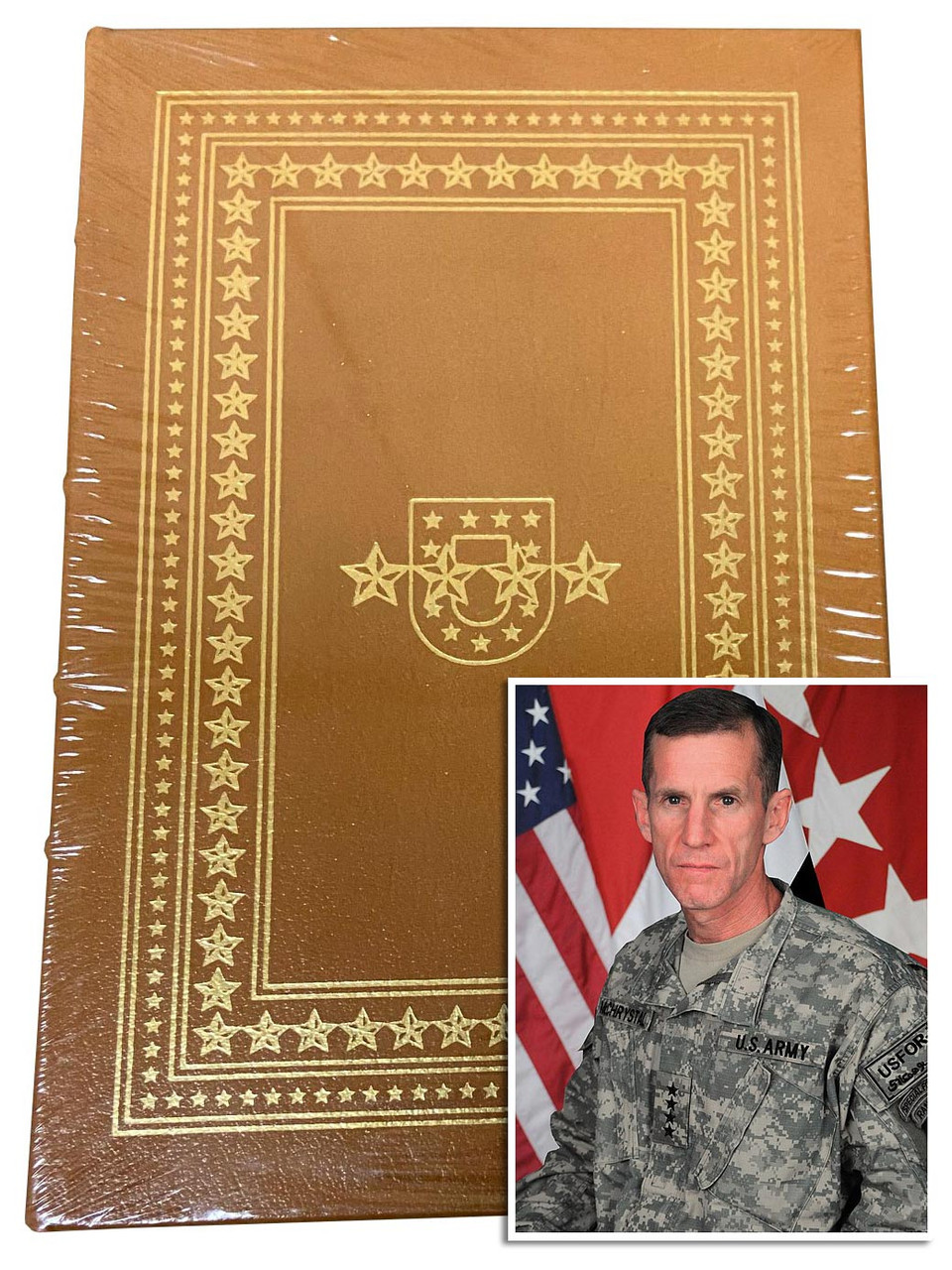 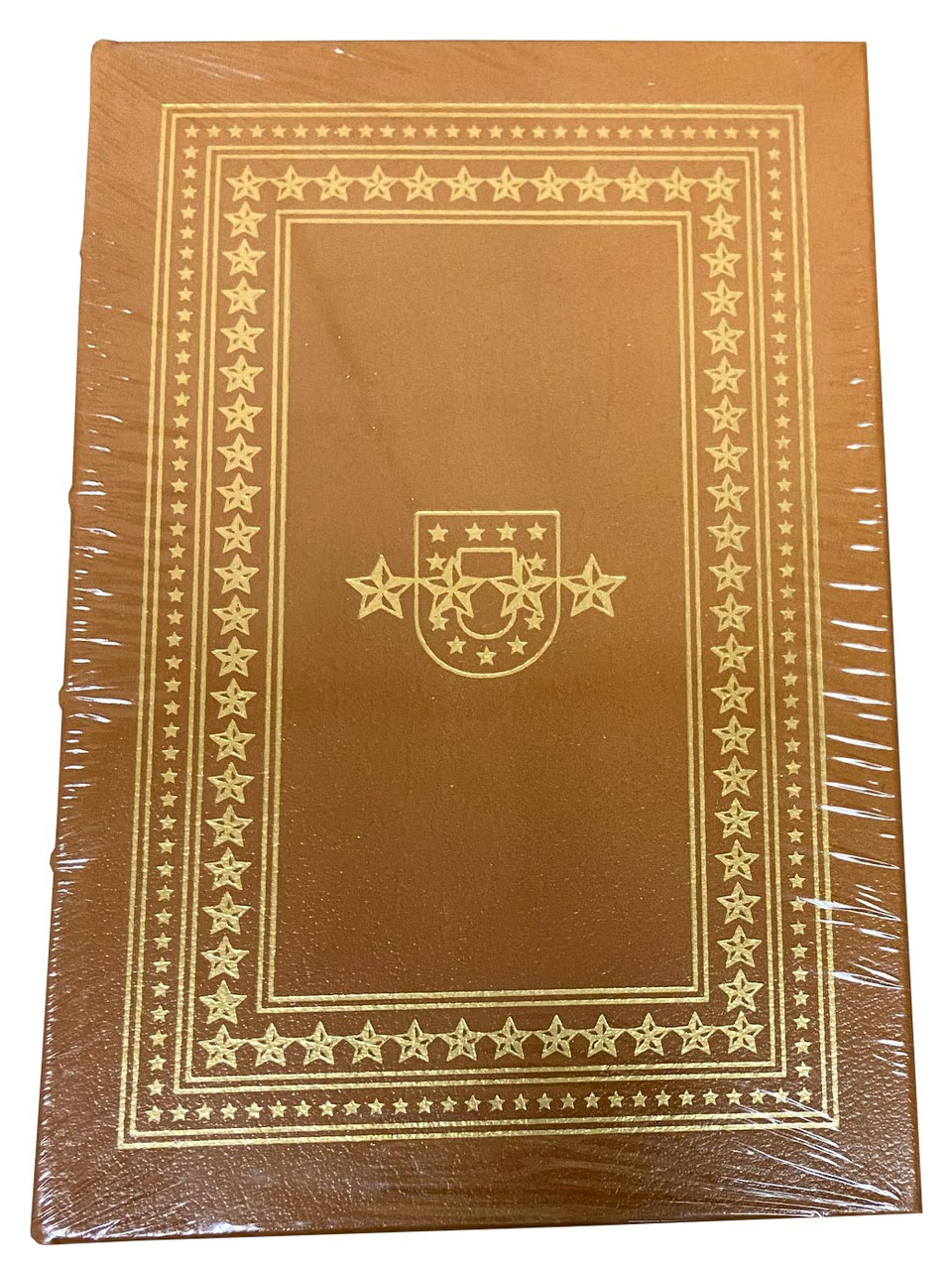 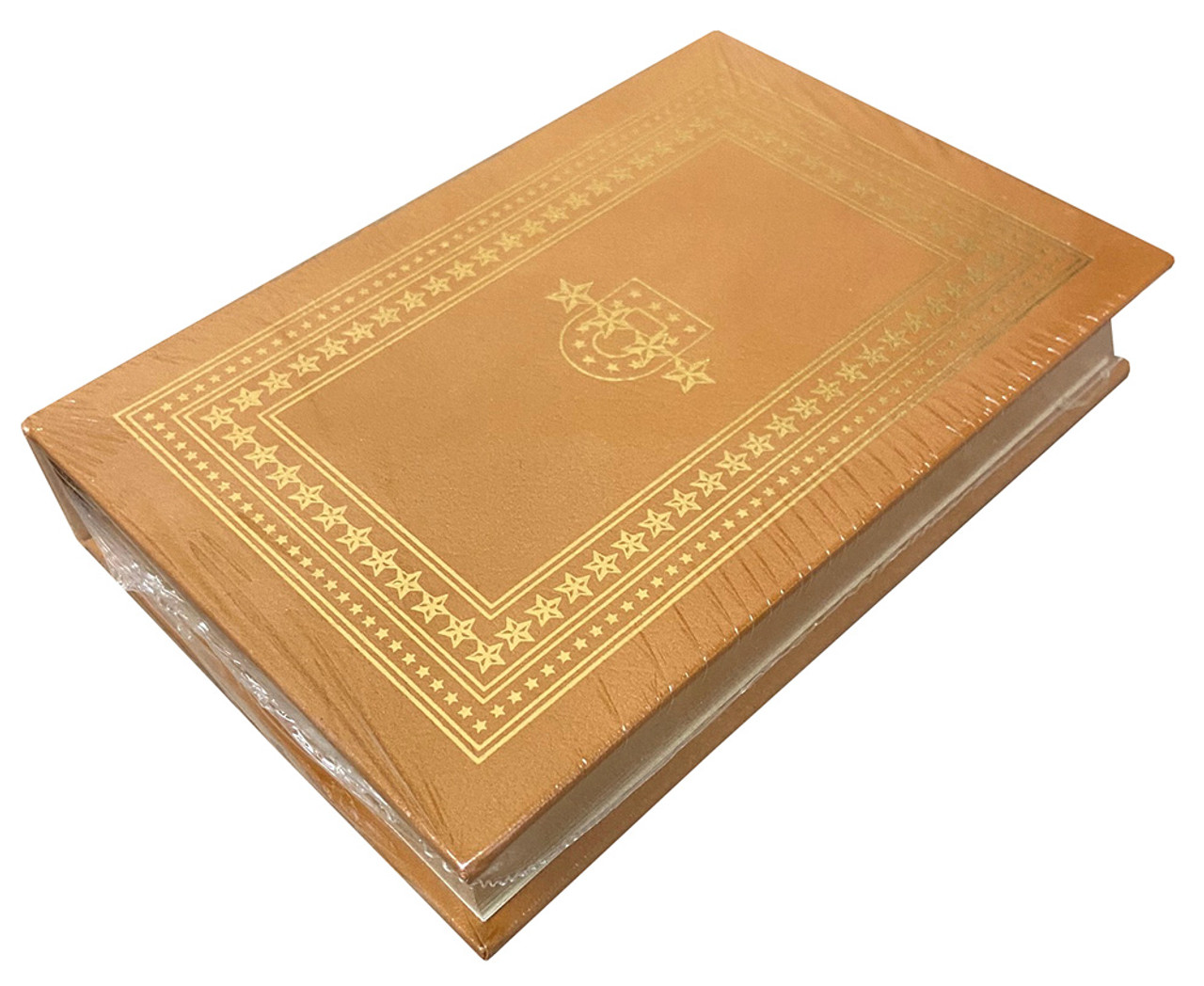 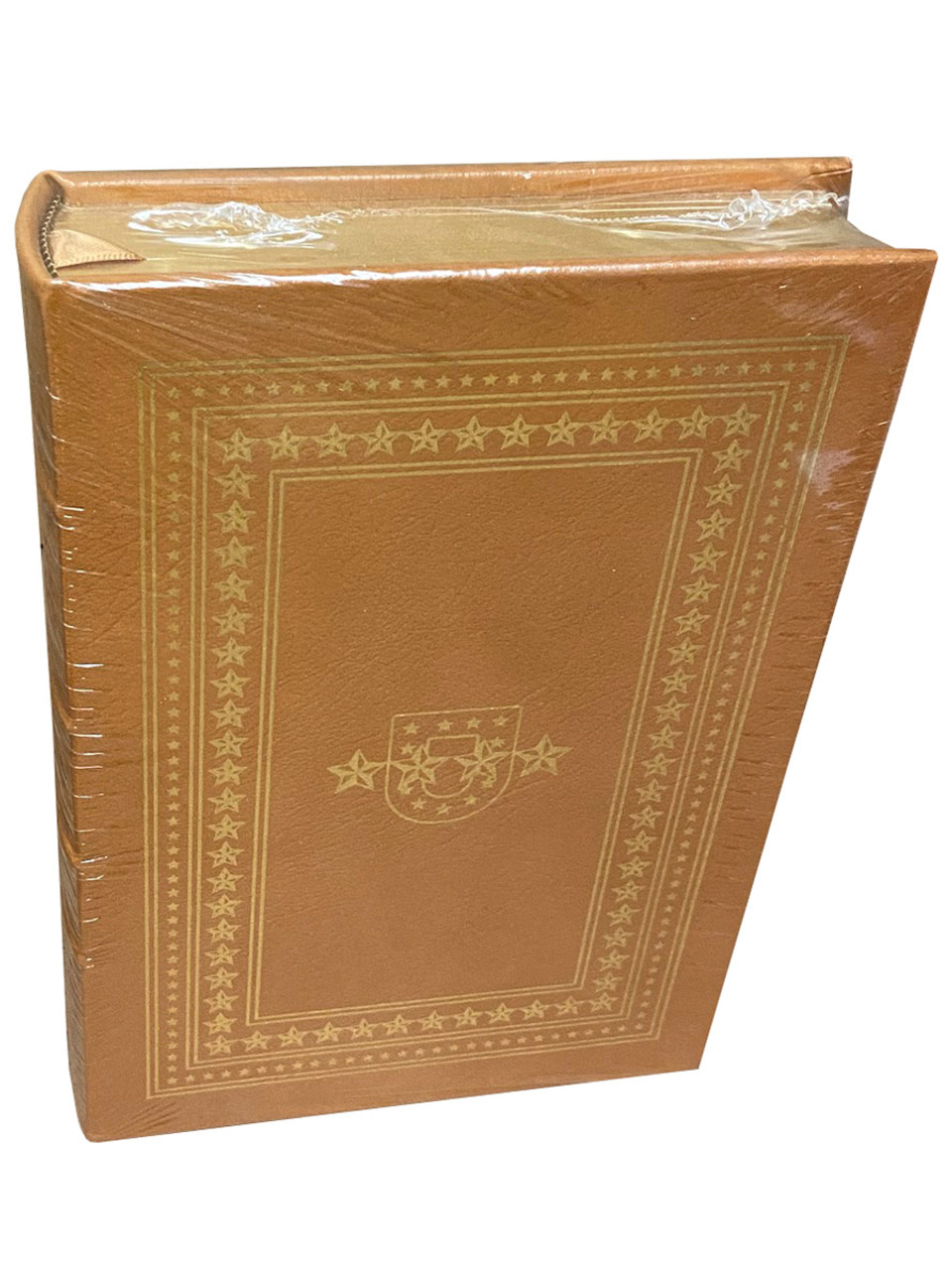 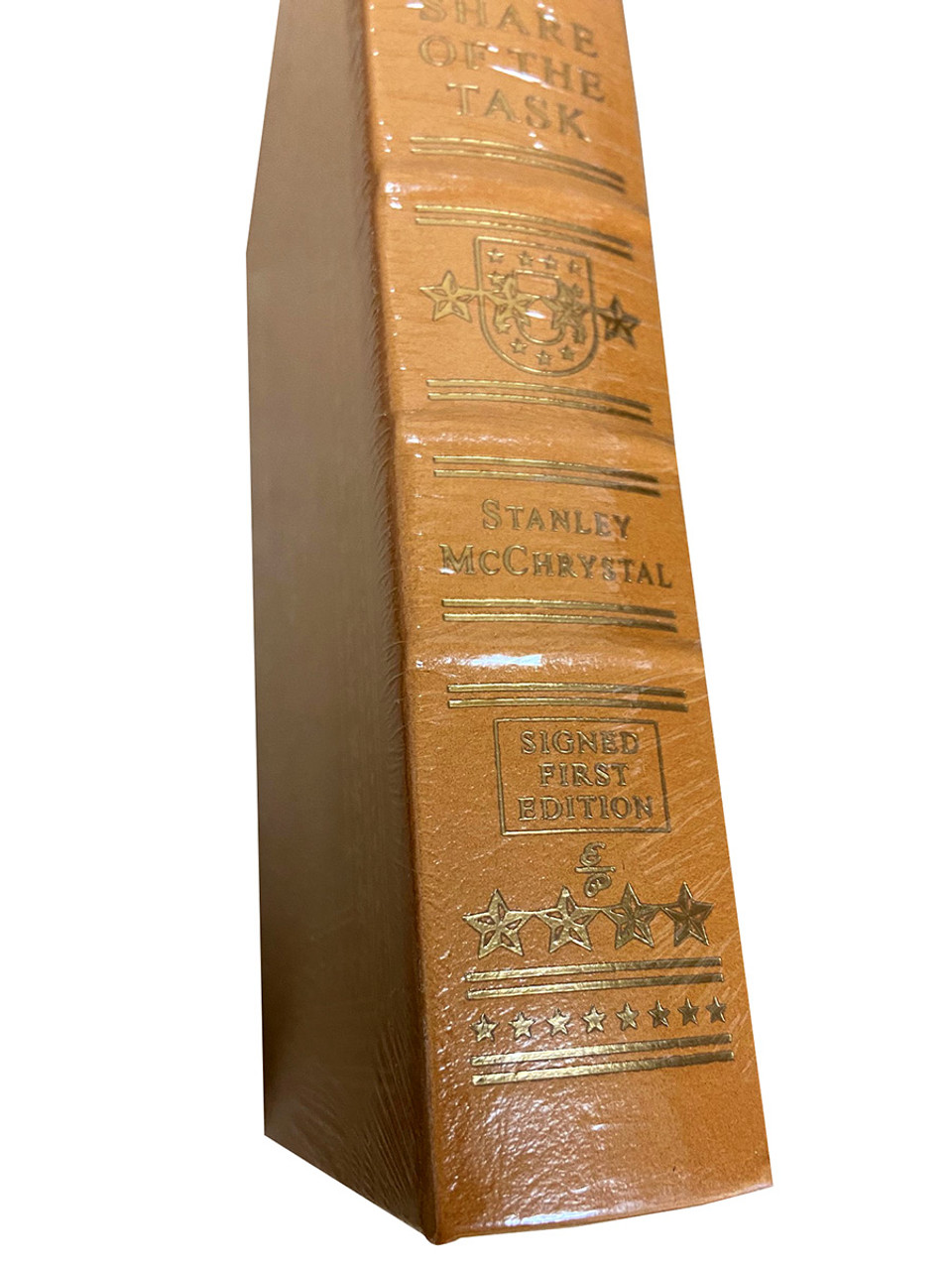 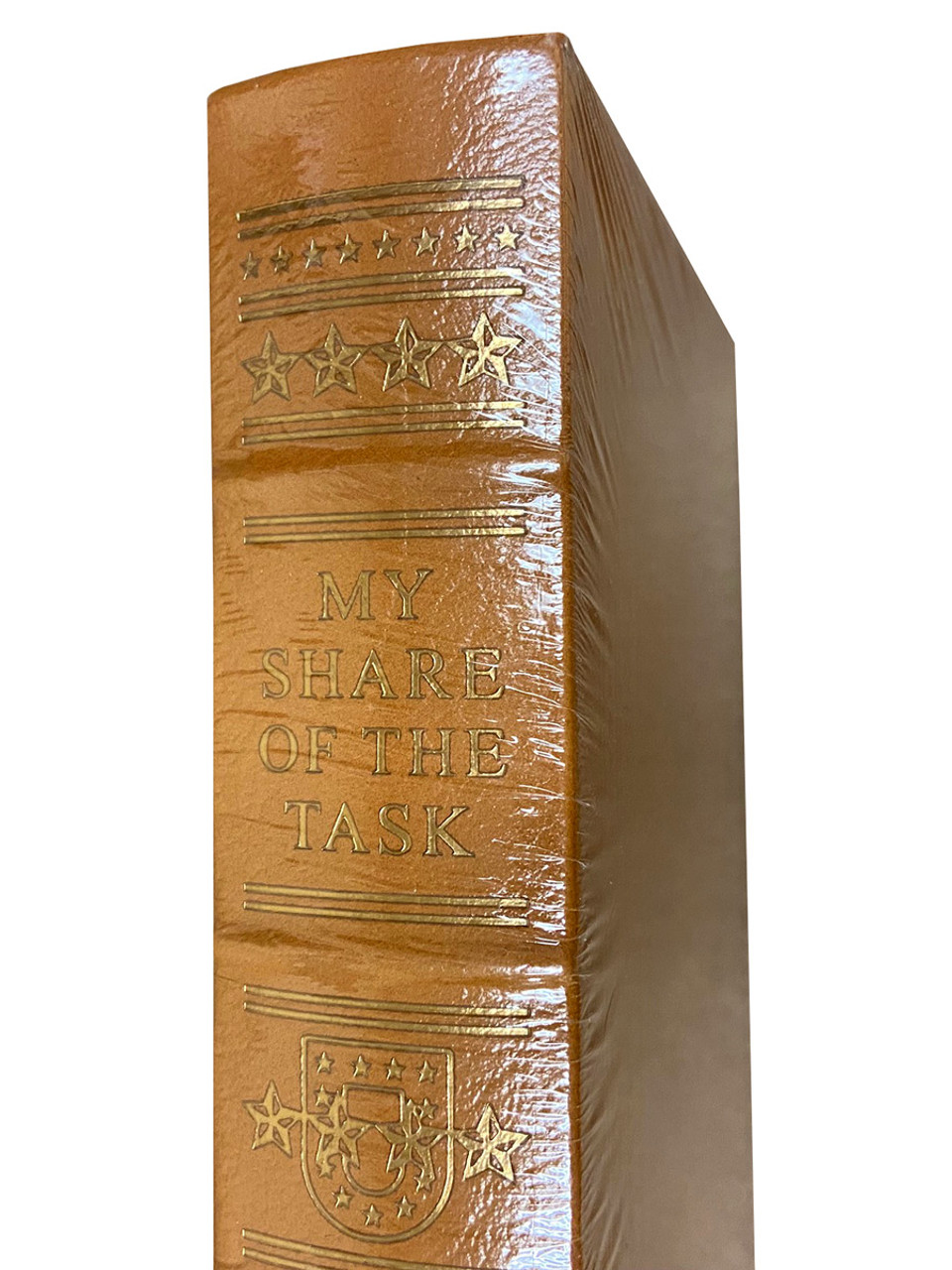 SIGNED FIRST EDITION OF ONLY 700 PRODUCED

Easton Press. Norwalk, CT. 2013. General Stanley McChrystal, U.S. Army, Retired. "My Share Of The Task: A Memoir". Signed First Edition of only 700 produced. Luxuriously bound in full genuine leather. Includes COA and collector's notes by the publisher. Each edition has been signed and numbered. As New, sealed in the shrink-wrap.

"General McChrystal is a legendary warrior with a fine eye for enduring lessons about leadership, courage, and consequence." —Tom Brokaw

General Stanley McChrystal is widely admired for his hunger to know the truth, his courage to find it, and his humility to listen to those around him. Even as the commanding officer of all U.S. and coalition forces in Afghanistan, he stationed himself forward and frequently went on patrols with his troops to experience their challenges firsthand. In this illuminating New York Times bestseller, McChrystal frankly explores the major episodes and controversies of his career. He describes the many outstanding leaders he served with and the handful of bad leaders he learned not to emulate. And he paints a vivid portrait of how the military establishment turned itself, in one generation, into the adaptive, resilient force that would soon be tested in Iraq, Afghanistan, and the wider War on Terror.

"A compelling account of his impressive career." -The Wall Street Journal '

"This is a brilliant book about leadership wrapped inside a fascinating personal narrative." -Walter Isaacson, author of Steve Jobs

Stanley McChrystal retired in July 2010 as a four-star general in the U.S. Army. His last assignment was as the commander of the International Security Assistance Force and as the commander of U.S. forces in Afghanistan. He is currently a senior fellow at Yale University's Jackson Institute for Global Affairs and cofounder of the McChrystal Group, a leadership consulting firm. He and his wife, Annie, live in Virginia.

He previously served as Director, Joint Staff from August 2008 to June 2009 and as Commander of JSOC from 2003 to 2008, where he was credited with the death of Abu Musab al-Zarqawi, leader of Al-Qaeda in Iraq, but also criticized for his alleged role in the cover-up of the Pat Tillman friendly fire incident. McChrystal was reportedly known for saying what other military leaders were thinking but were afraid to say; this was one of the reasons cited for his appointment to lead all forces in Afghanistan. He held the post from June 15, 2009, to June 23, 2010.

Former Defense Secretary Robert Gates described McChrystal as "perhaps the finest warrior and leader of men in combat I ever met." However, following unflattering remarks about Vice President Joe Biden and other administration officials[9] attributed to McChrystal and his aides in a Rolling Stone article, McChrystal was recalled to Washington, D.C., where President Barack Obama accepted his resignation as commander in Afghanistan. His command of the International Security Assistance Force in Afghanistan was assumed by the deputy commander, British Army General Sir Nicholas Parker, pending the confirmation of a replacement. Obama named General David Petraeus as McChrystal's replacement; Petraeus was confirmed by the Senate and officially assumed command on June 30. Days after being relieved of his duties in Afghanistan, McChrystal announced his retirement. Since 2010, he has taught courses in international relations at Yale University as a Senior Fellow of the university's Jackson Institute for Global Affairs. 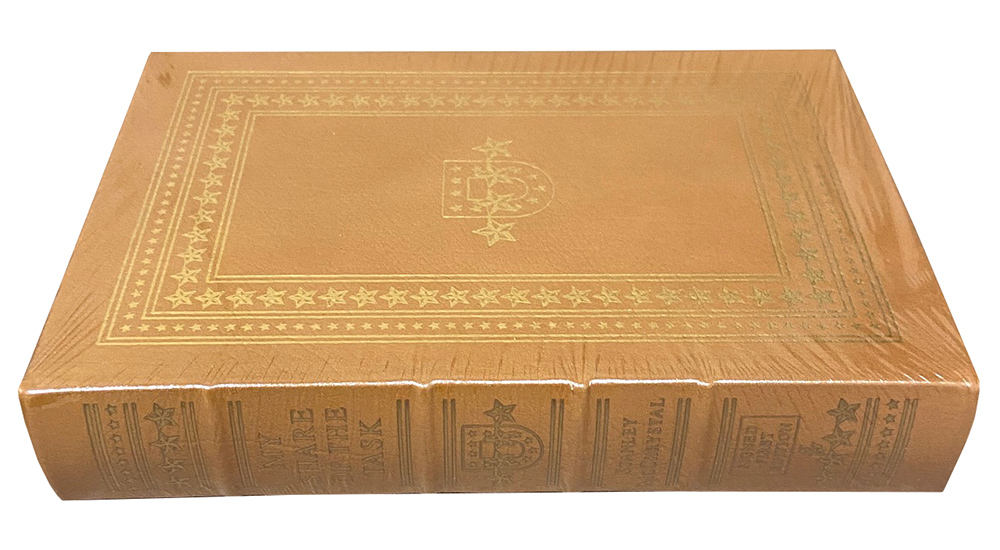 “General McChrystal is a legendary warrior with a fine eye for enduring lessons about leadership, courage, and consequence. He took me inside the command bunker, on nighttime raids, and through the fog of war, political and military. My Share of the Task is an important, riveting, and instructive account of the triumphs and trials of America’s two longest wars.”
—TOM BROKAW, author of The Greatest Generation

“Written in the tradition of Ulysses S. Grant, My Share of the Task is a clear, compelling, self-critical, and utterly unpretentious memoir. I know of no better book on the nature of modern military command.”

“This is a brilliant book about leadership wrapped inside a fascinating personal narra­tive. By describing his own life, and especially his command in Afghanistan, General McChrystal helps us understand the modern missions of the military. More than that, he provides lessons about leadership and values that are indispensable in our daily lives. It’s a deeply inspiring tale.”

“Stanley McChrystal has written the finest military memoir of his generation. Lucid, thoughtful, and steeped in military and strategic history, My Share of the Task is not just the story of one man’s service; it is the story of the development of a new way of war. This book is not just for aficionados of military history or for students of American foreign policy; it’s for anyone who wants to understand the challenges of leadership in America today.”

“A remarkable memoir by one of the most exceptional and thoughtful leaders of his generation.”

—RORY STEWART, author of The Places in Between

VERY FINE GUARANTEED. As New. Sealed in the original shrink-wrap without any discernible flaws. The corners are sharp and not bumped. Photos of actual item.