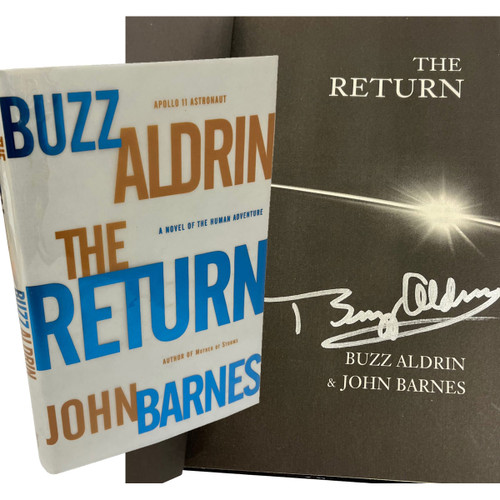 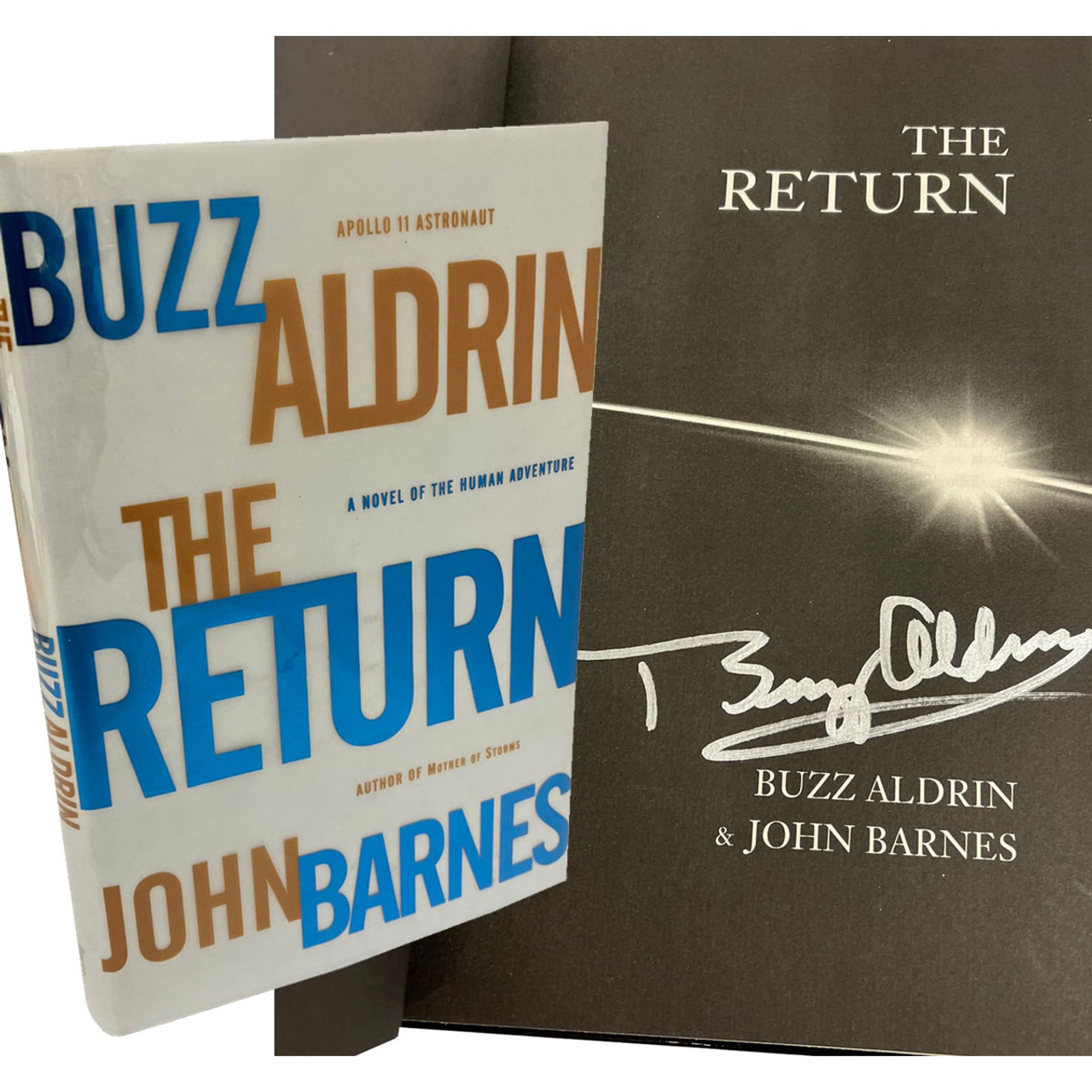 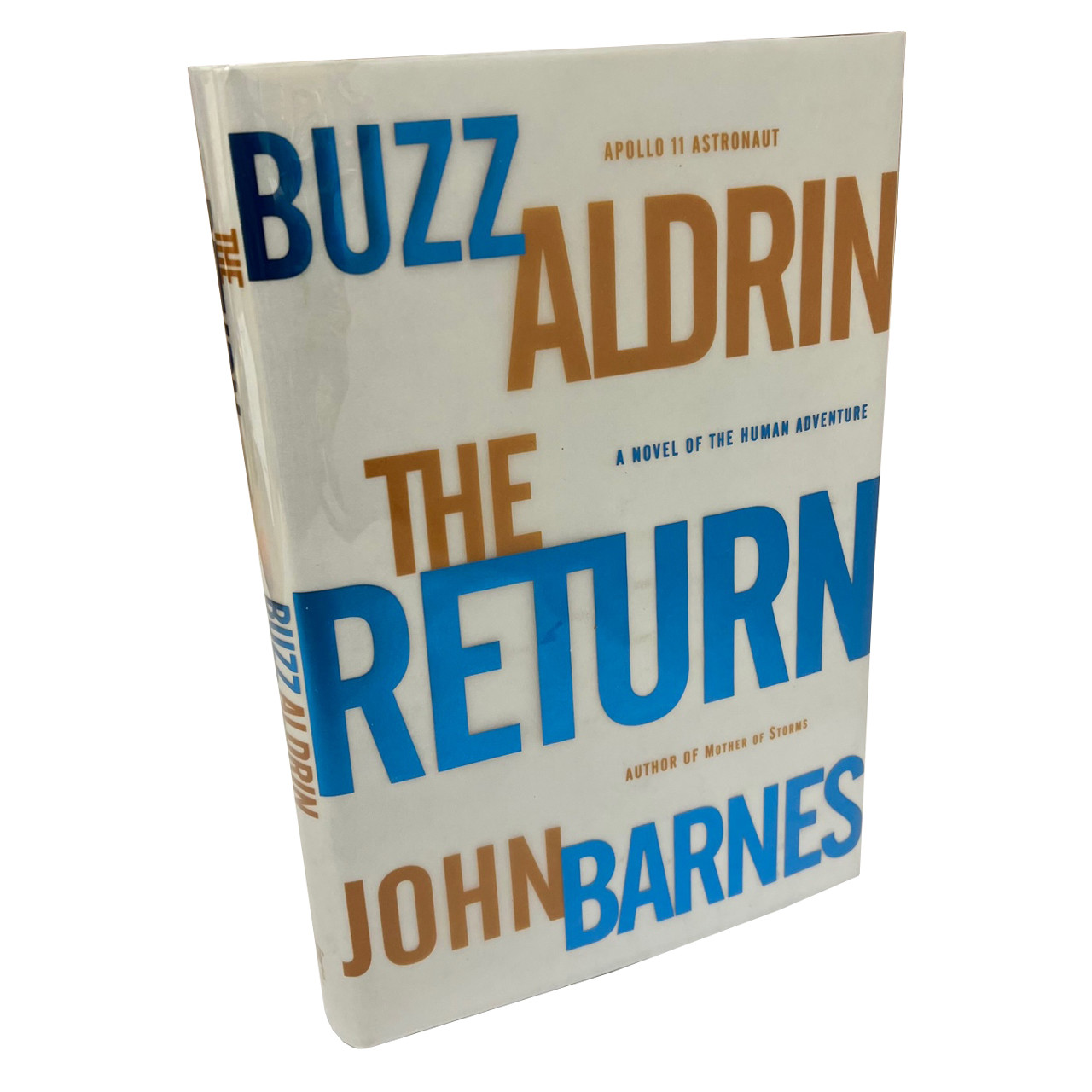 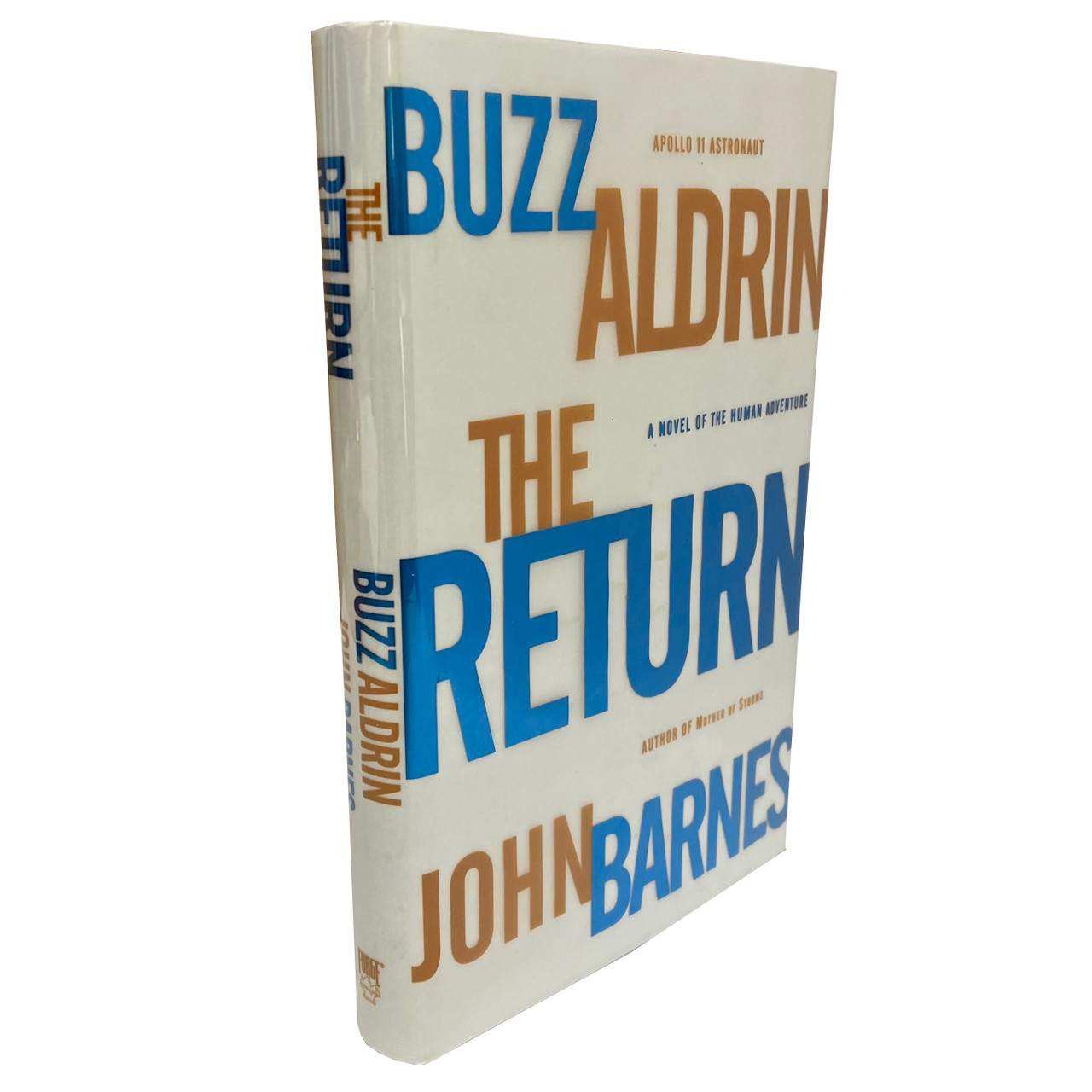 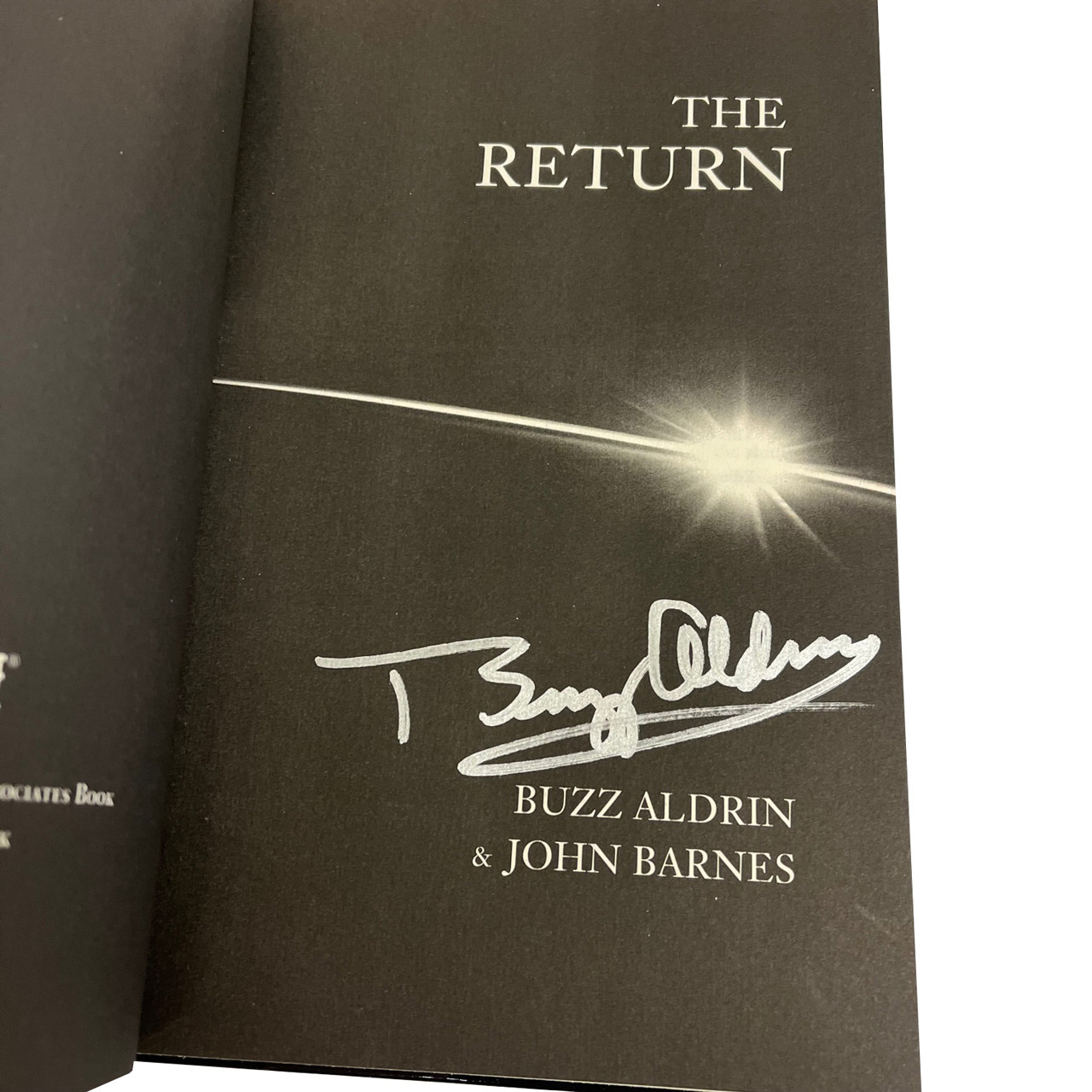 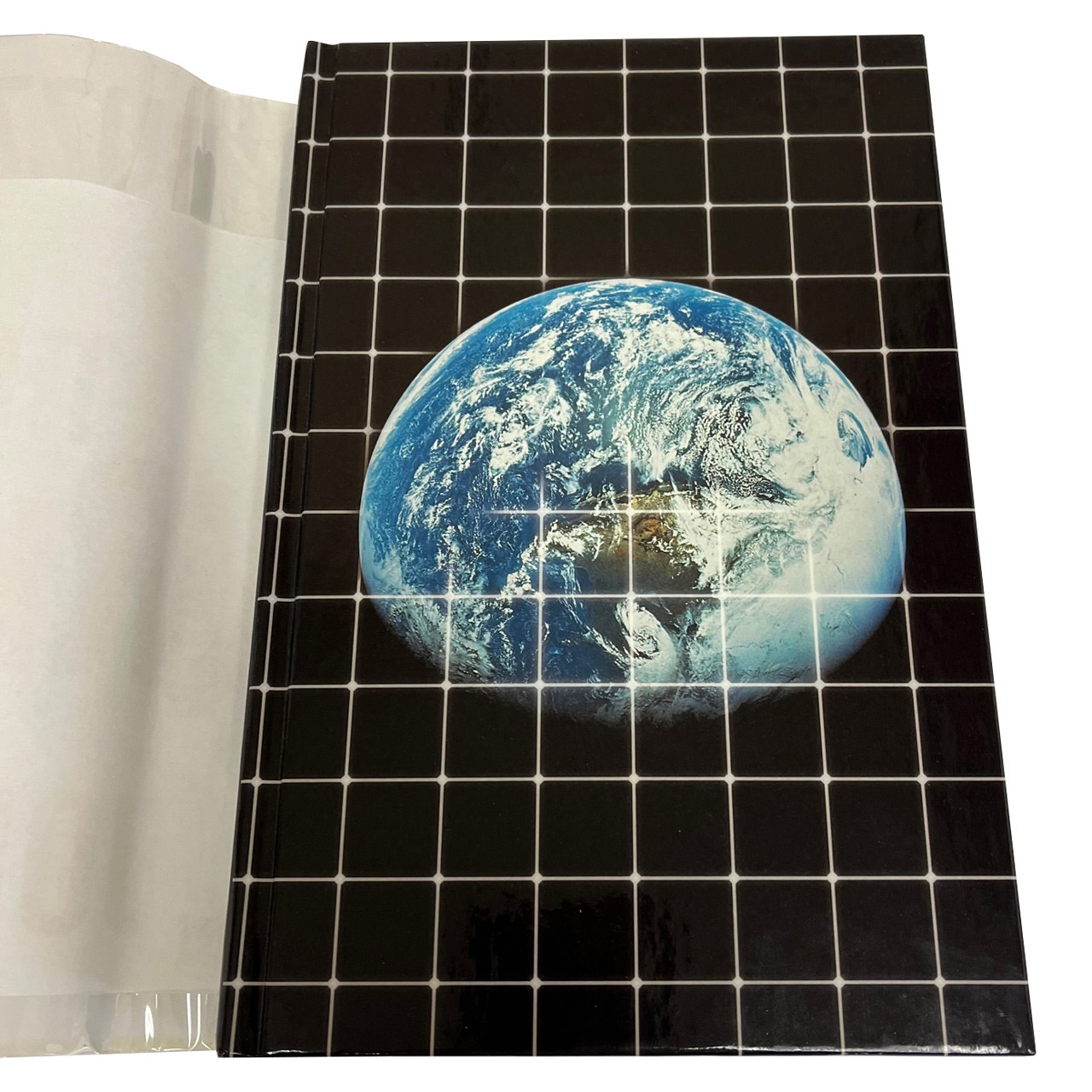 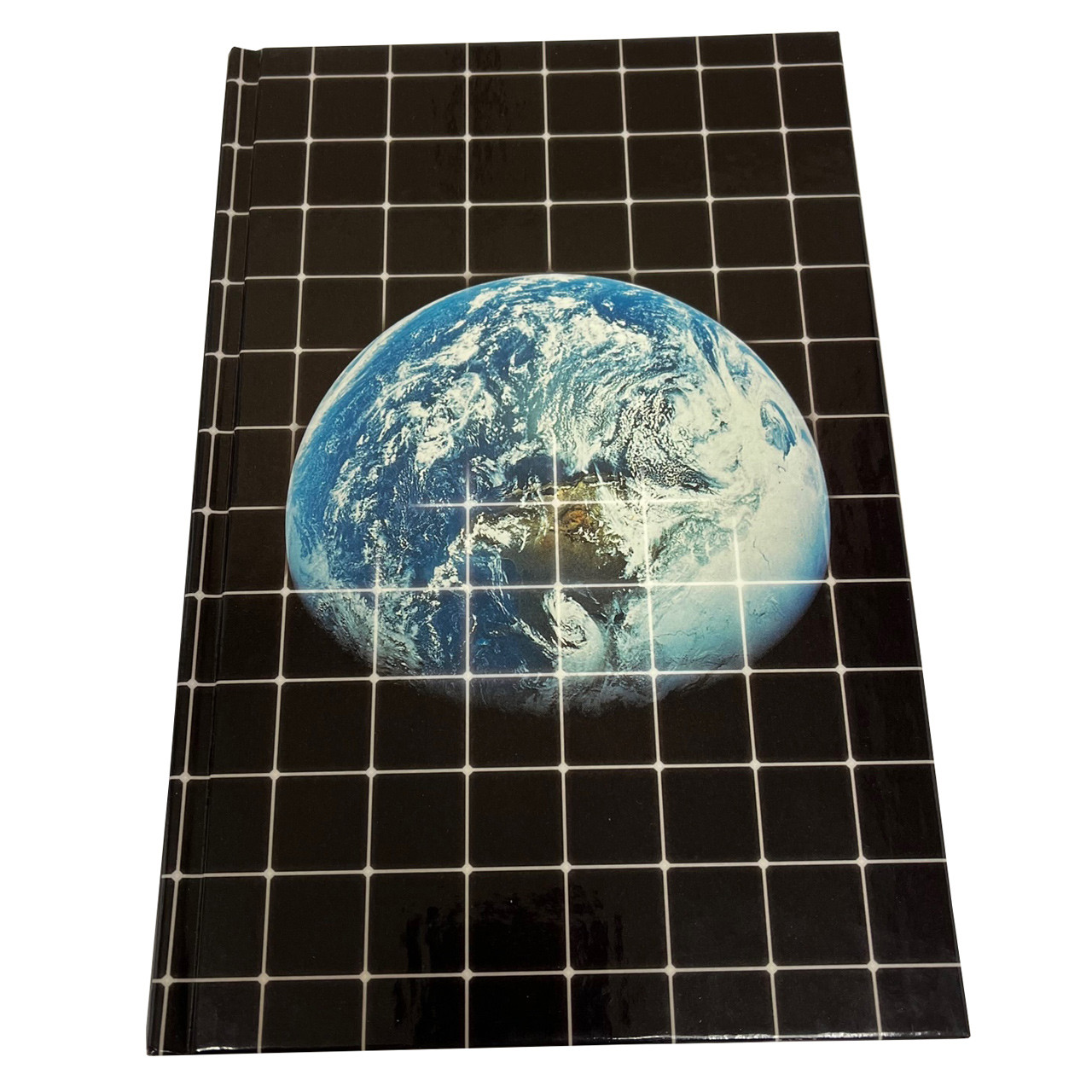 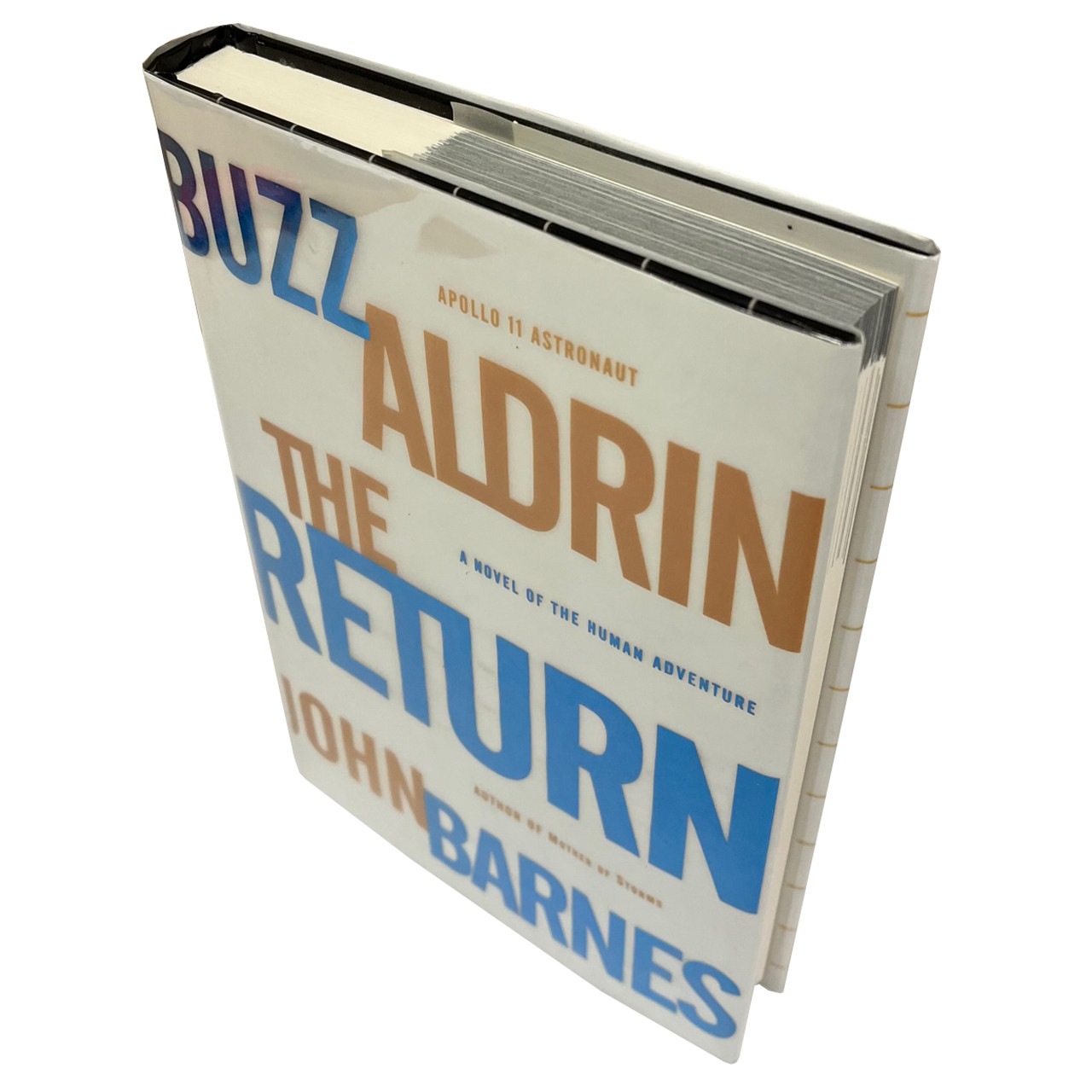 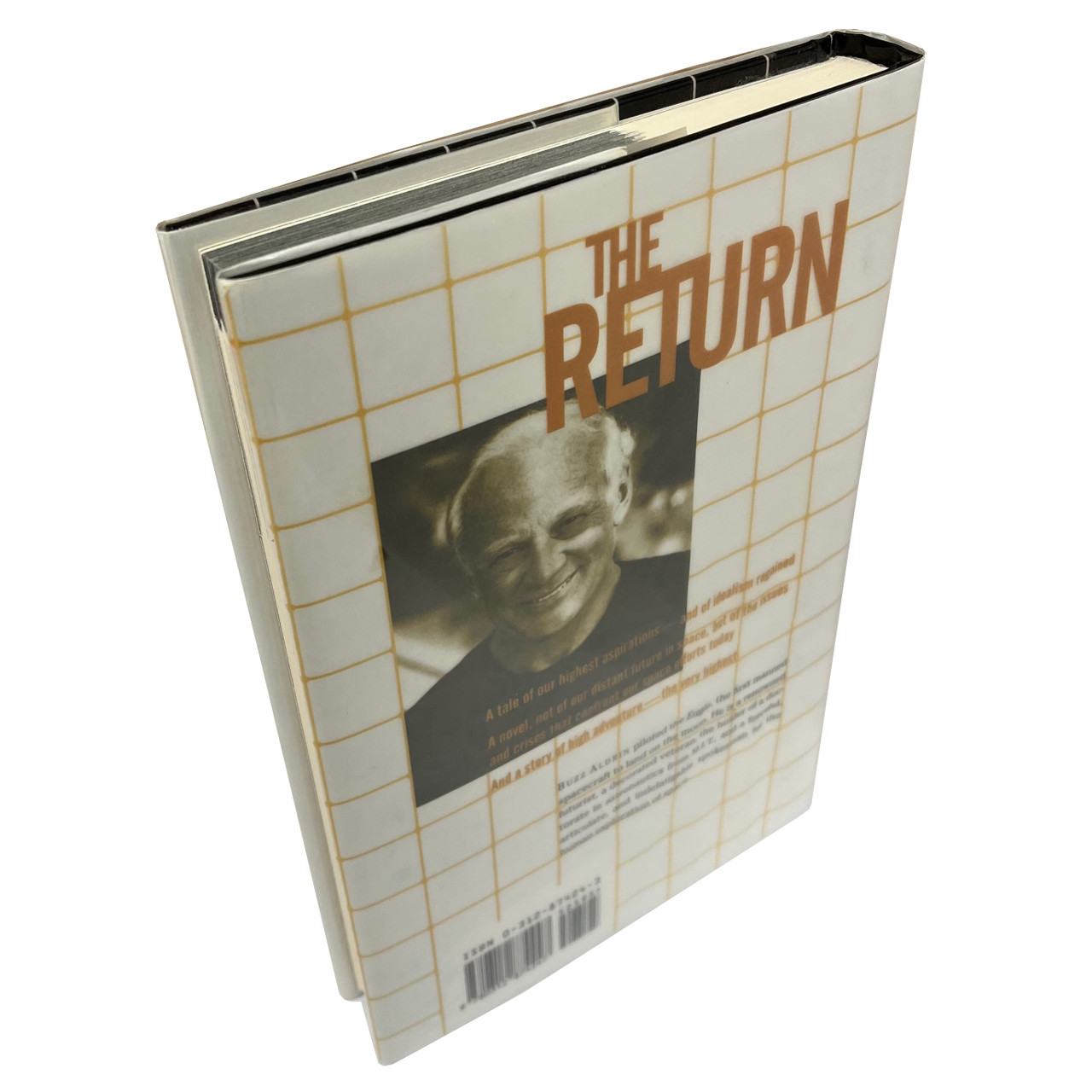 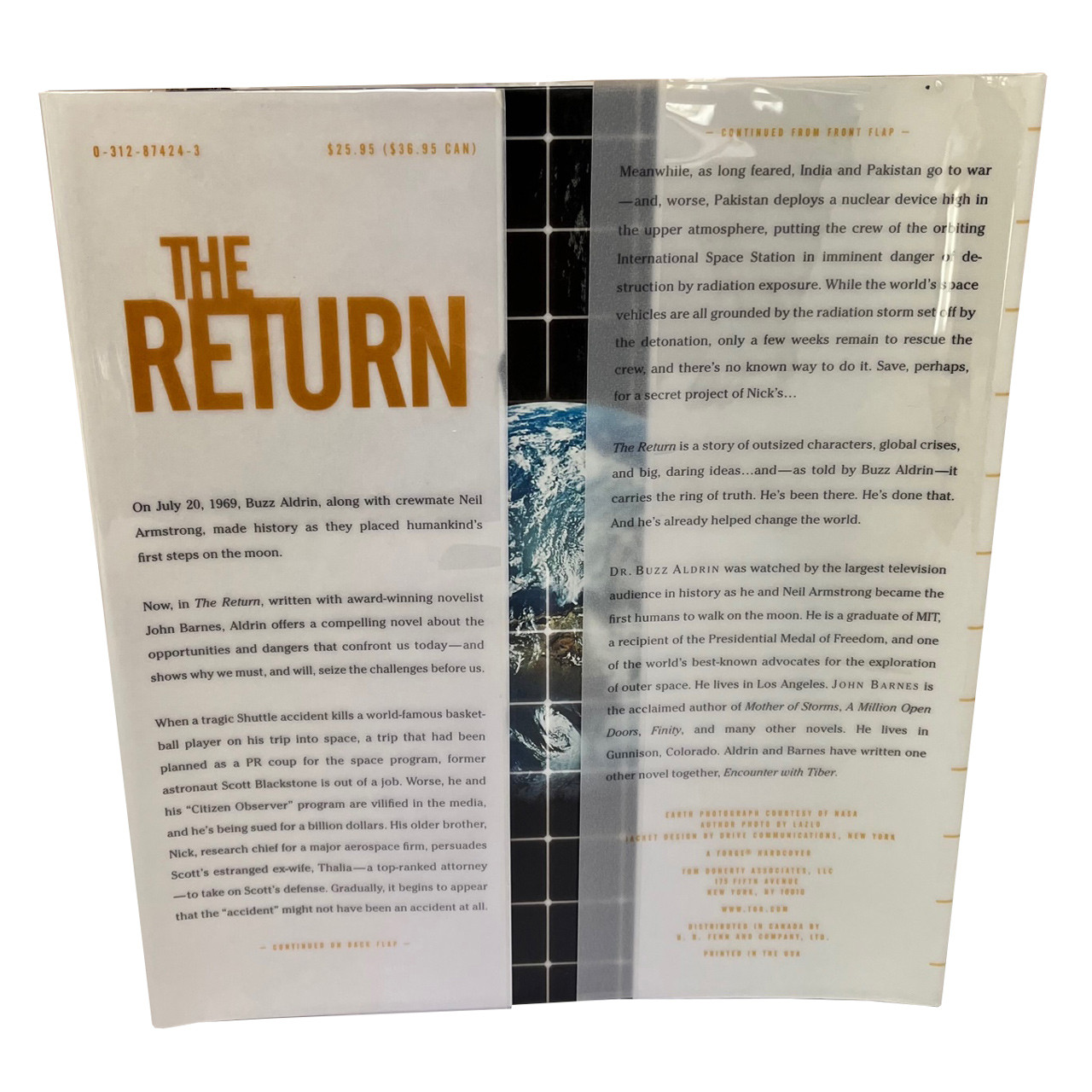 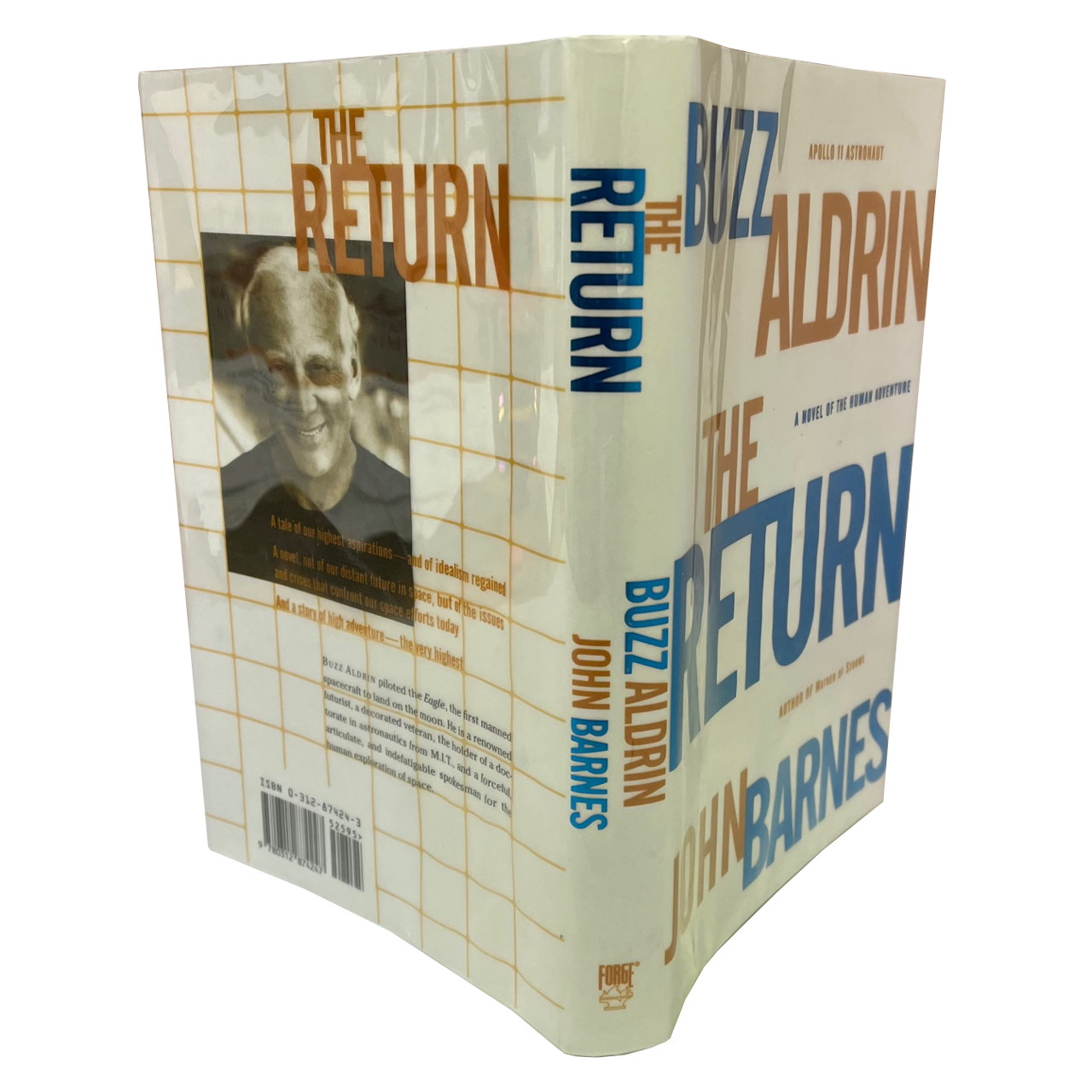 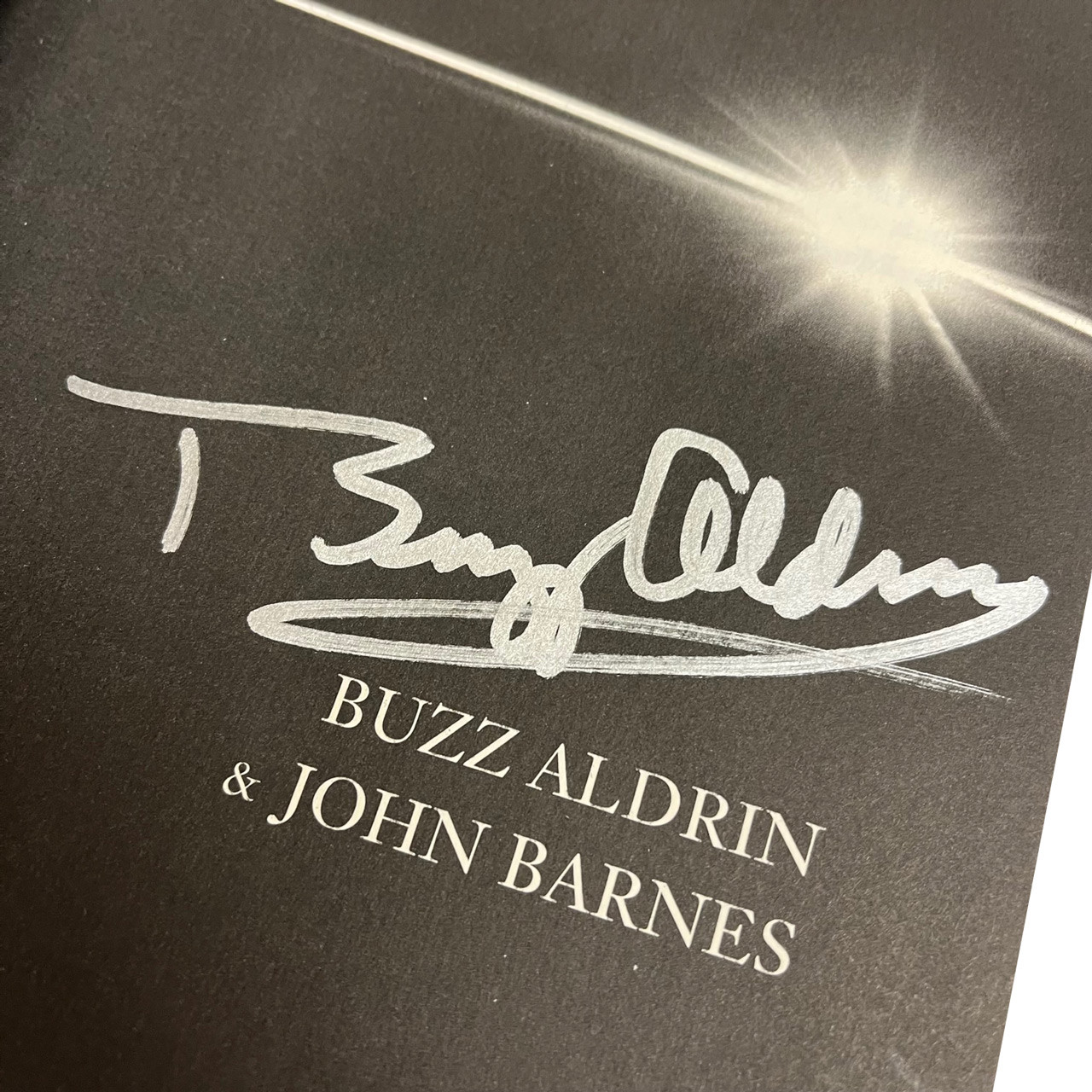 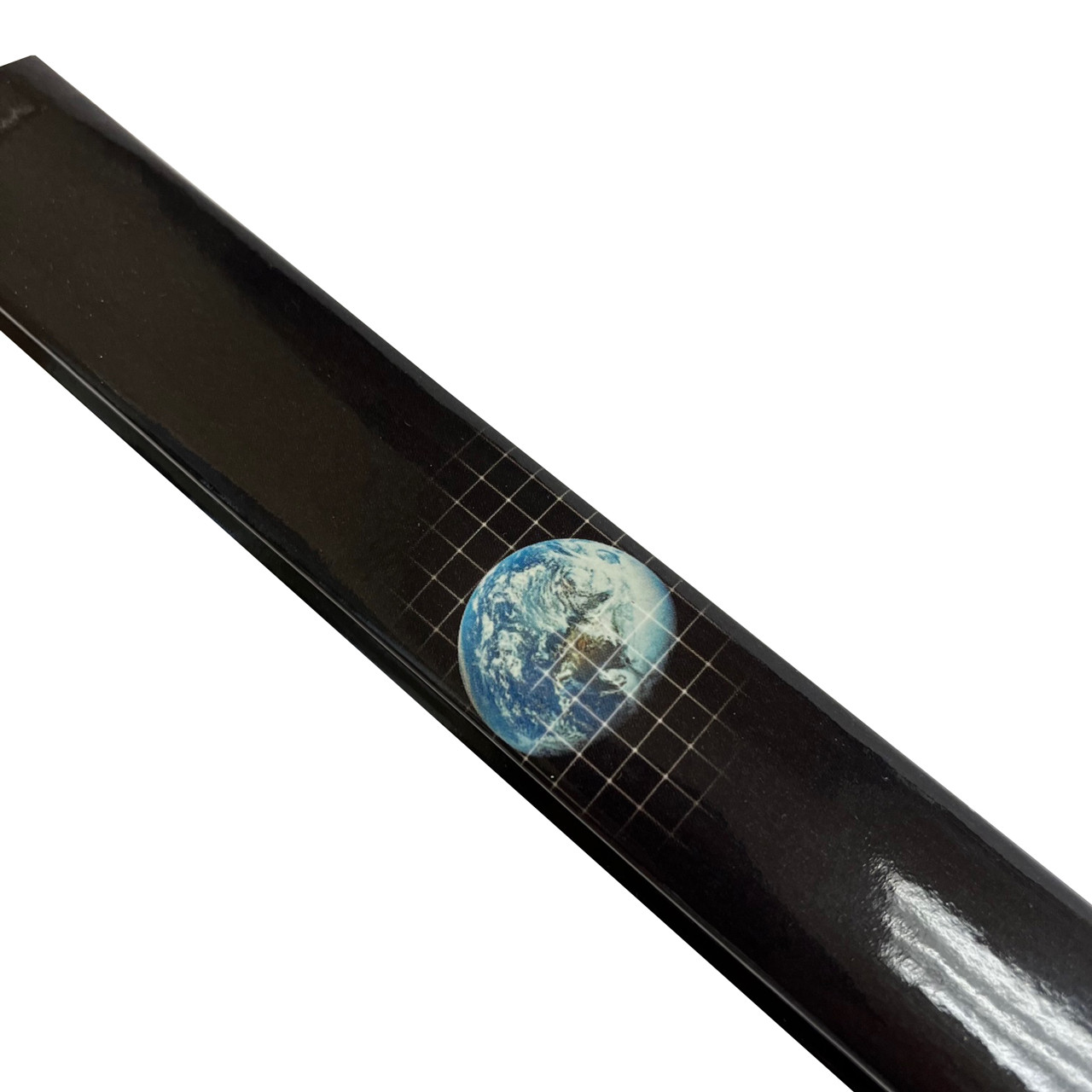 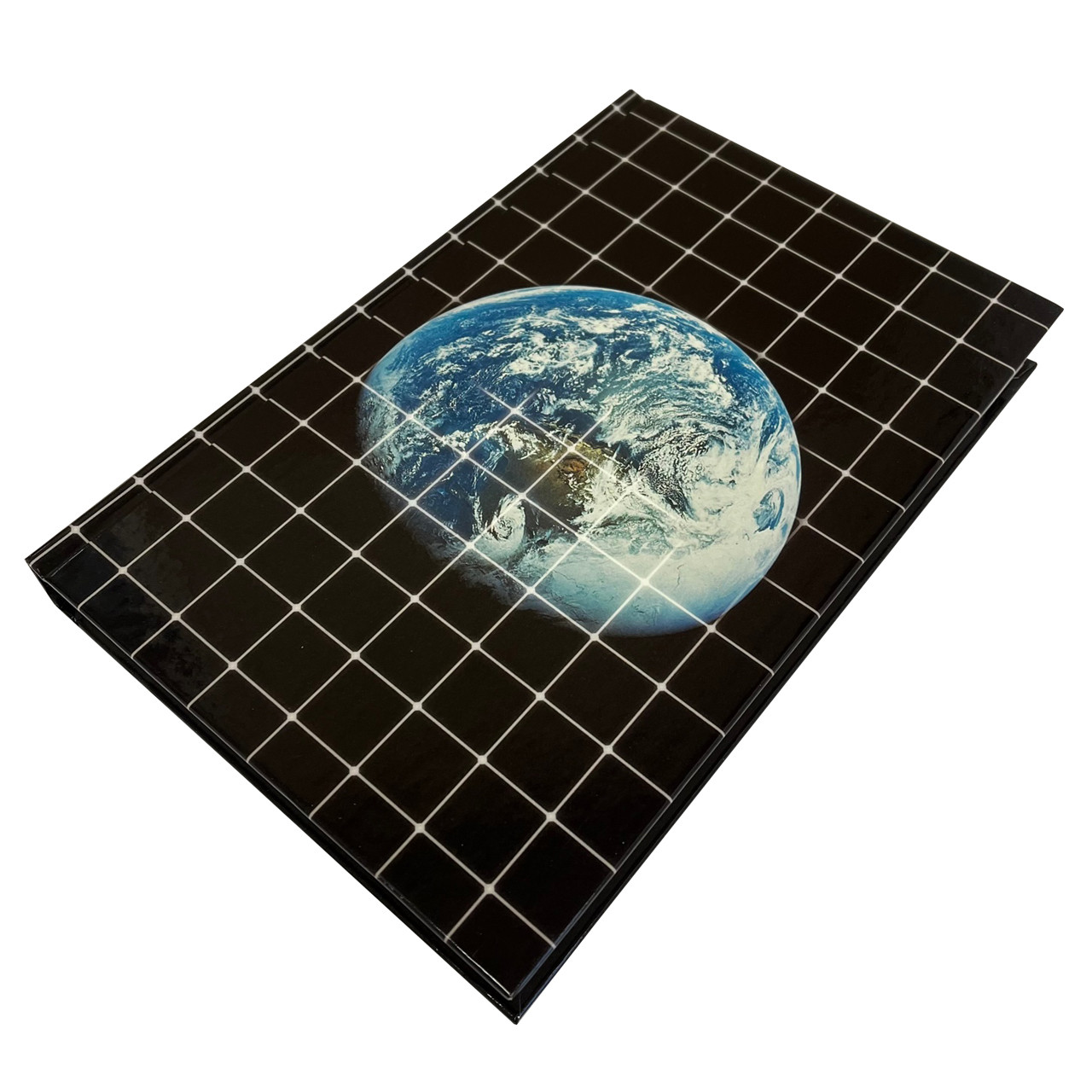 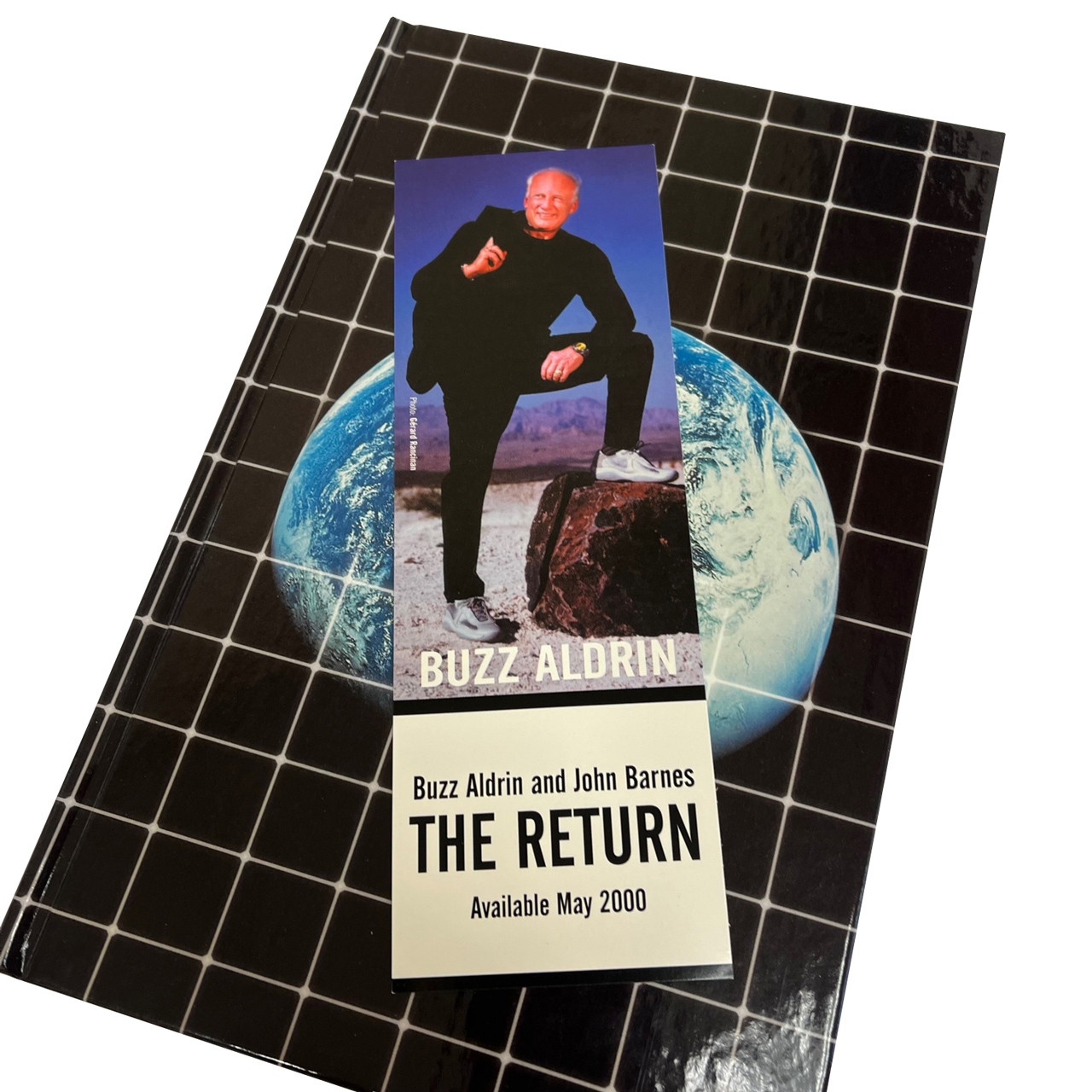 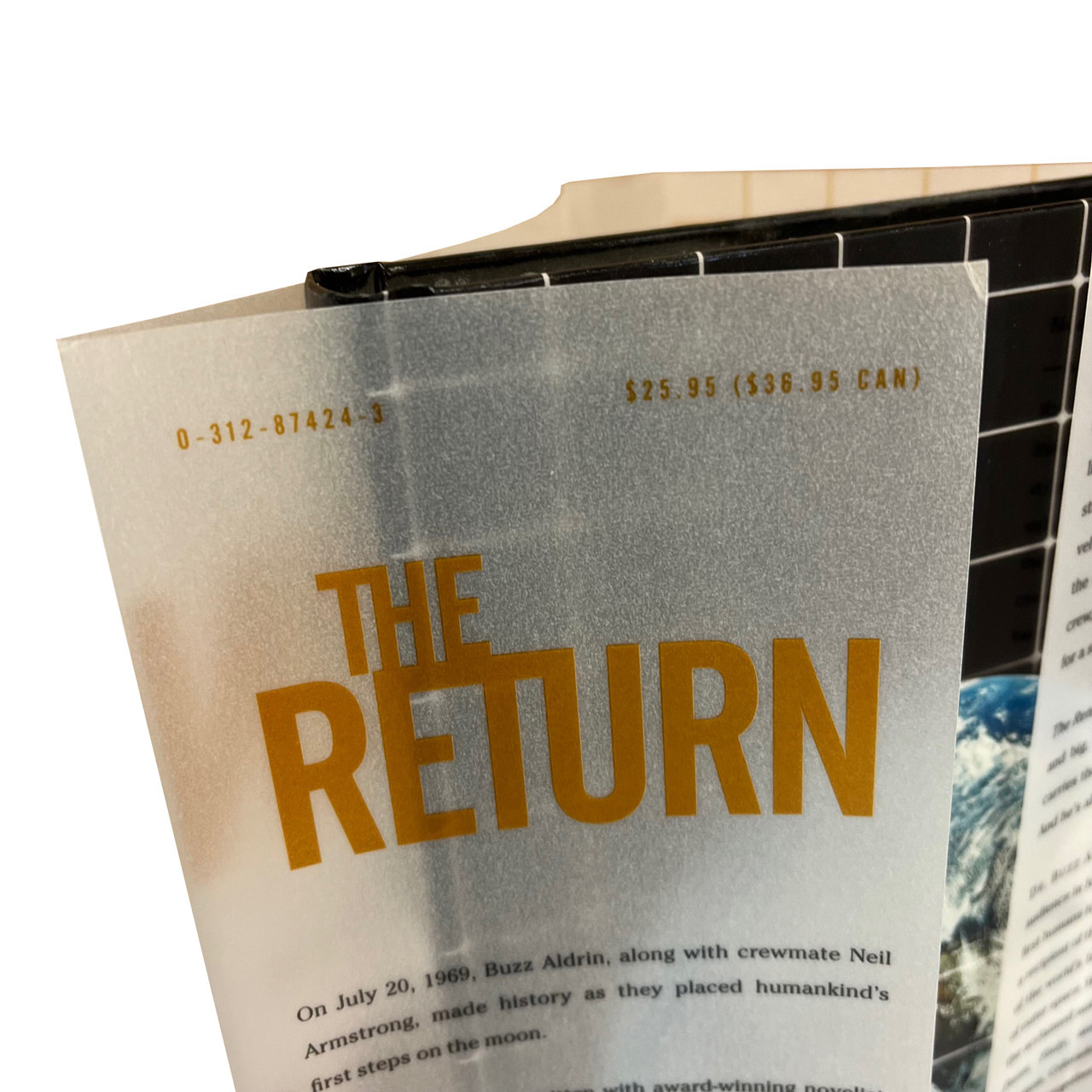 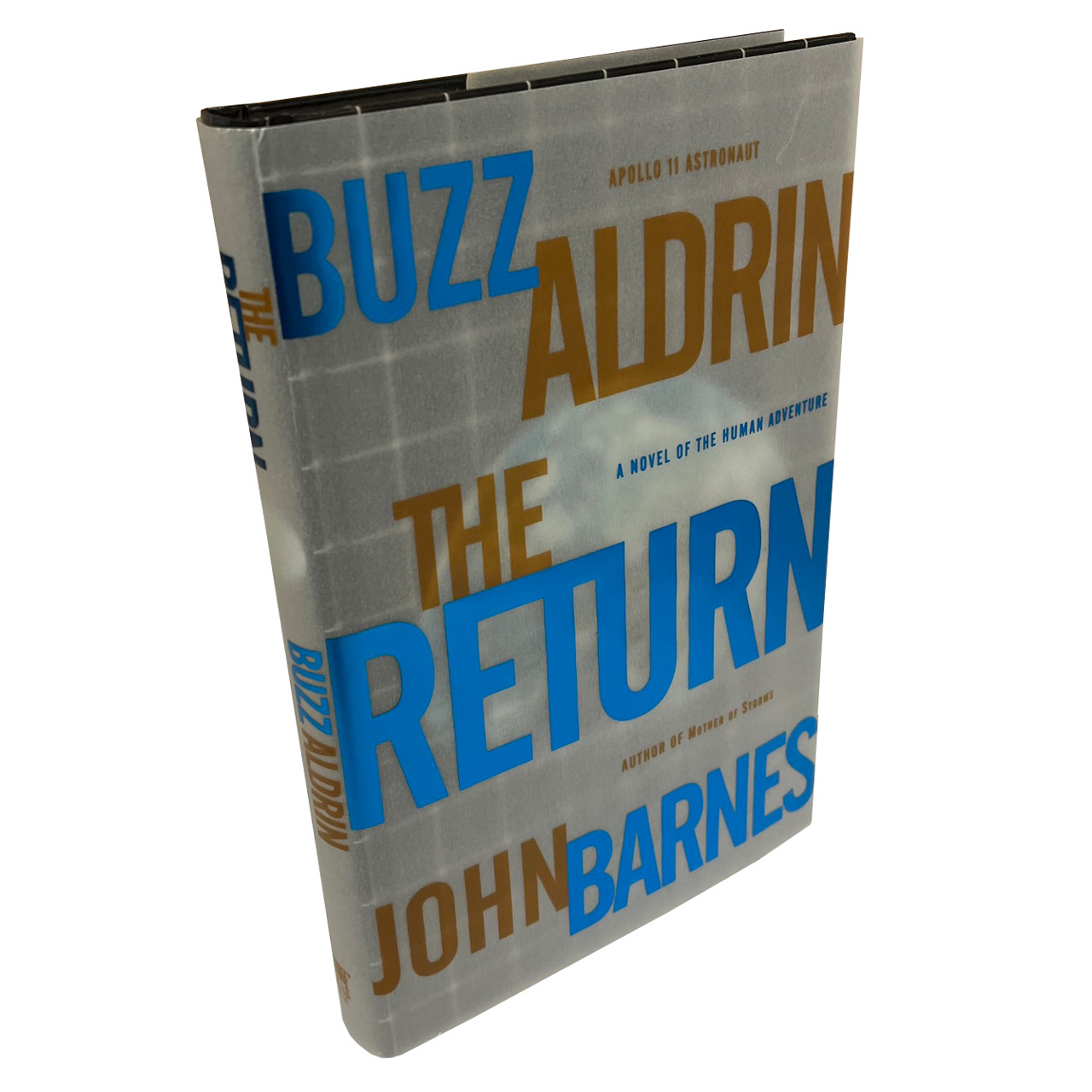 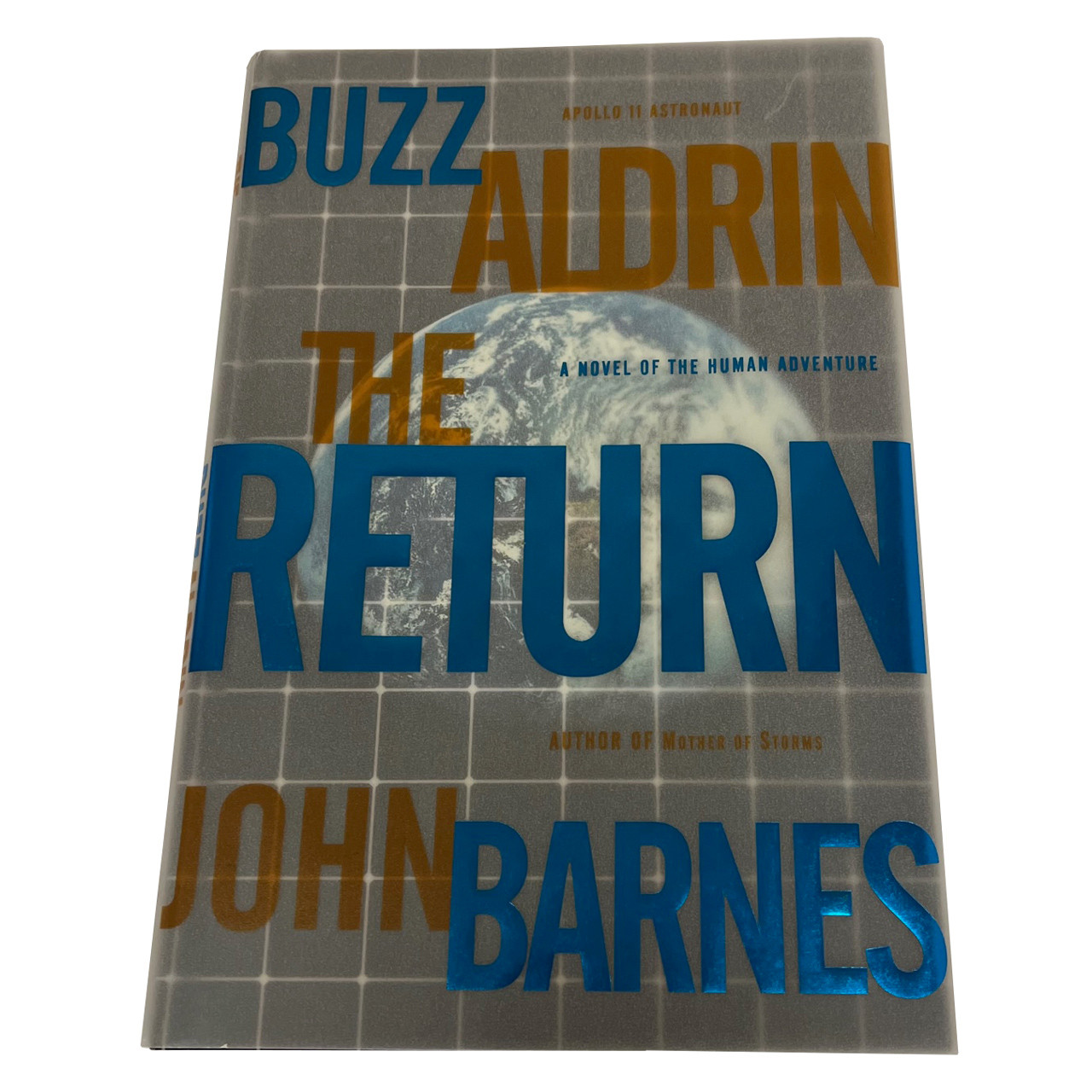 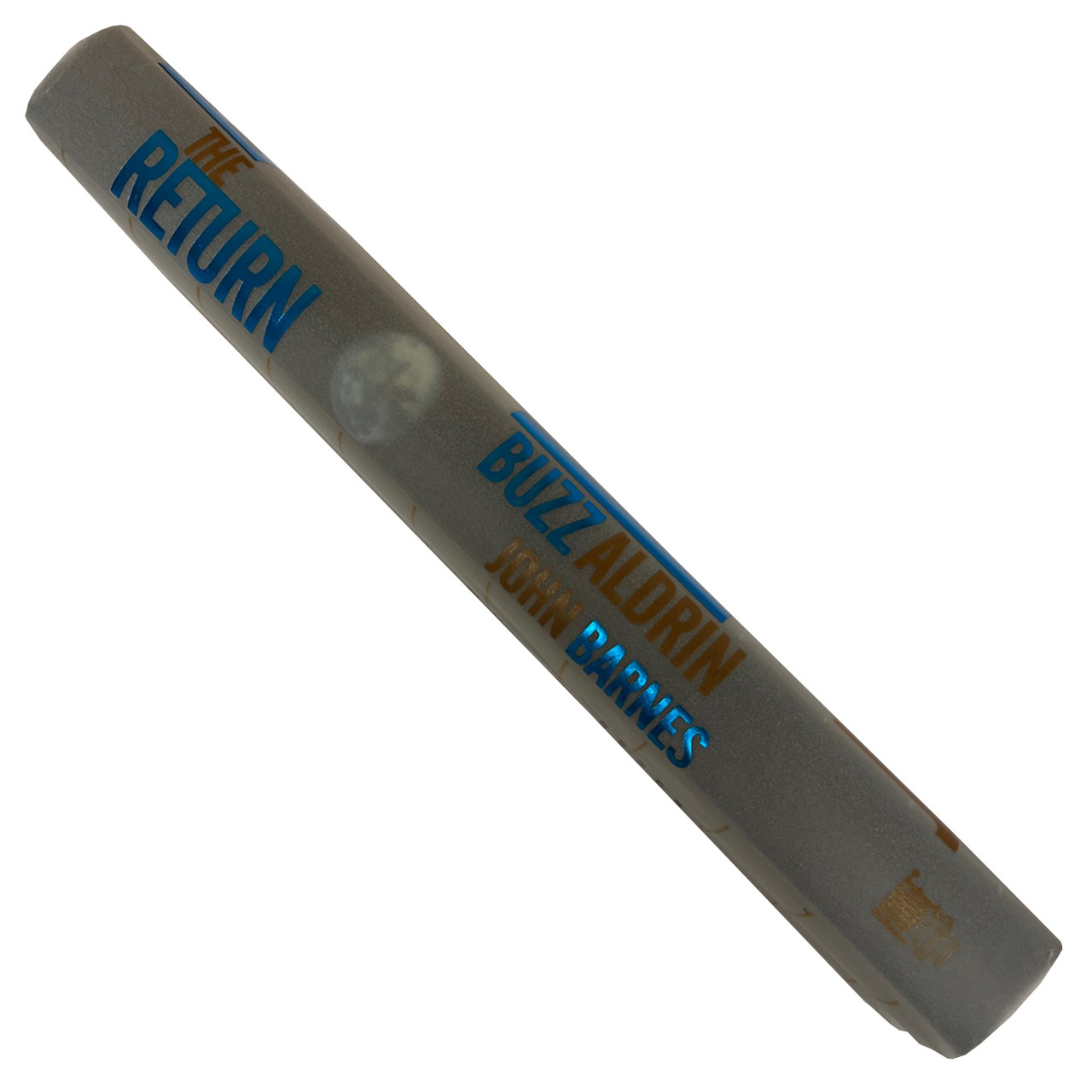 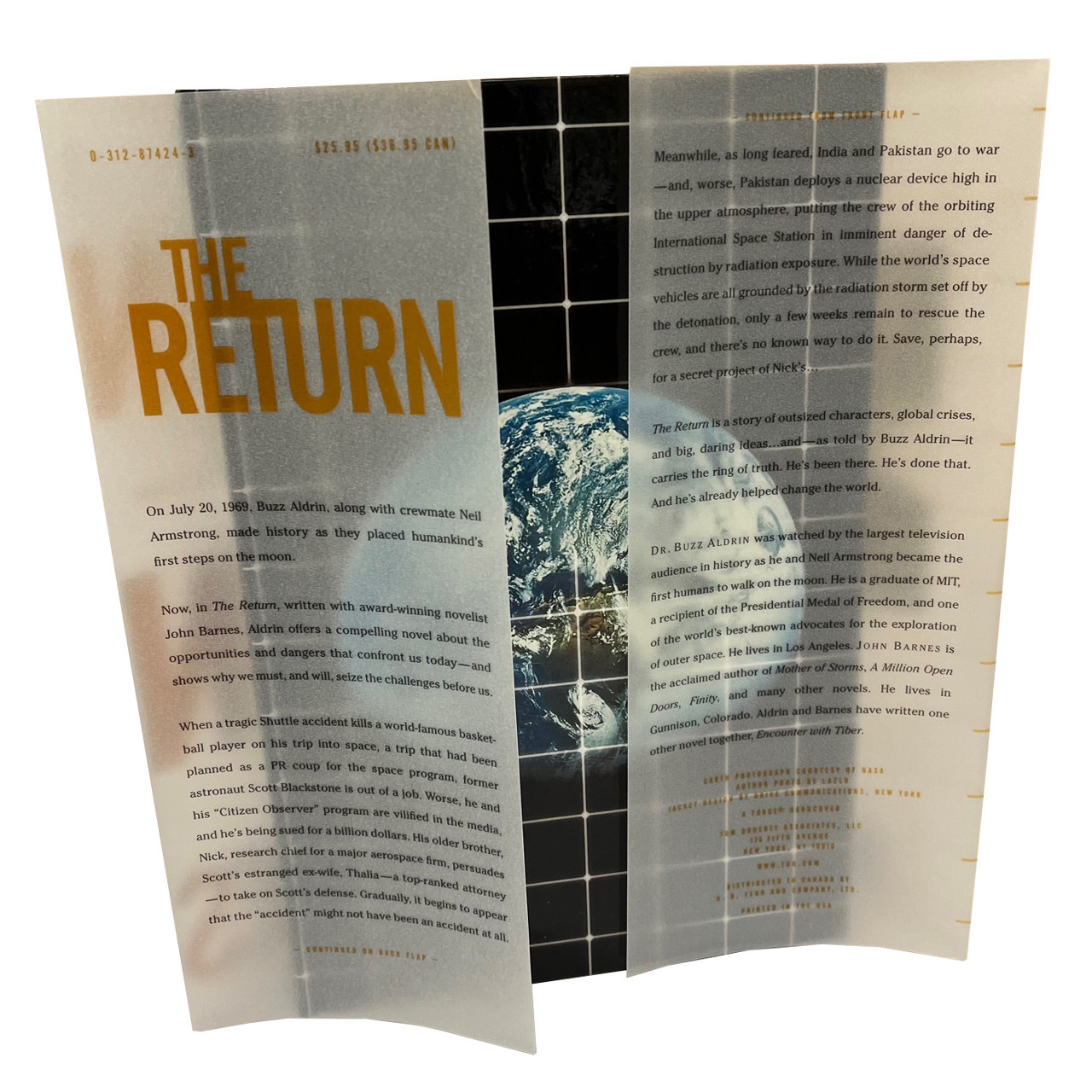 The Return is a tale about the kind of space adventure that could happen today--and that will happen tomorrow. As told by Buzz Aldrin, who's been there...and who's already helped change the world.

Personally signed by Buzz Aldrin, one of the first men to walk on the moon. 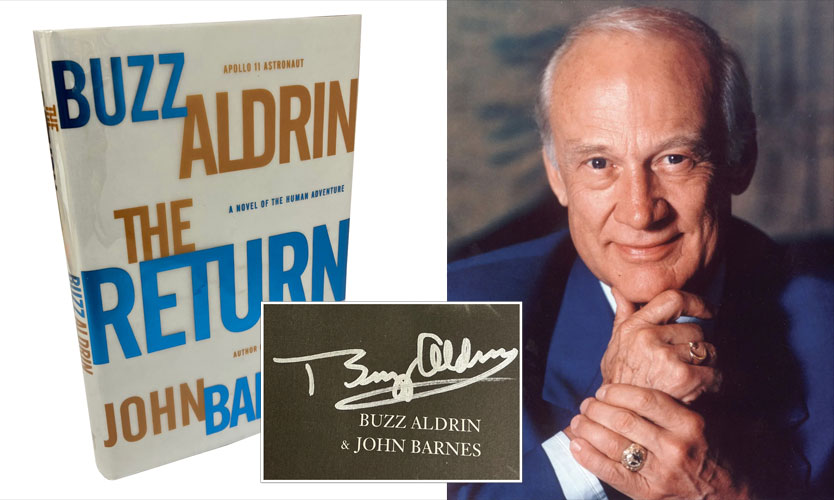 A highly sought after autograph. This wonderful collectible has been personally signed by Buzz Aldrin, one of the first men to walk on the moon, directly onto the title page of the book.

Forge Books May 2000. Buzz Aldrin & John Barnes. "The Return: A Novel Of The Human Adventure". Signed by the author.  Signed First Edition First Printing. "First Edition" as stated on the copyright page with the full number line as required. Hardcover book with dust-jacket that is not price-clipped. ISBN 0-312-87424-3. Fine/Fine. Original "glassine" transparent dust-jacket that is quite unique for this edition.

When a Shuttle accident kills a world-famous basketball player, former astronaut Scott Blackstone is out of a job. Worse, he and his "Citizen Observer" program are vilified in the media and he's being sued for a billion dollars. His ex-wife agrees to take the case and it begins to appear that the "accident" might not have been an accident at all. Meanwhile, India and Pakistan go to war. Pakistan deploys a nuclear device high in the upper atmosphere, putting the crew of the orbiting International Space Station in imminent danger of death by radiation exposure. Only a few weeks remain to rescue the crew and there's no known way to do it, except, perhaps, for a secret project of Scott's brother, Nick.

"A story of outsized characters, global crises, and big, daring ideas as told by one of America's greatest heroes." (Amazon.com)

The Return is a 2000 novel written by Buzz Aldrin and John Barnes. The book details a fictional account of the future of space travel, specifically space tourism. Although set in the near future, it now seems somewhat dated as events that happened shortly after its release, such as the Columbia disaster and recent space tourism advances such as SpaceShipOne and Virgin Galactic, are not included. Most of the corporations within the novel have fictional names; however, it is often quite clear that they are references to real corporations such as Boeing, Lockheed Martin, and Nike. Overall, the book heavily supports the view that tourism is needed to drive the space industry.

Buzz Aldrin (born Edwin Eugene Aldrin Jr.; January 20, 1930) is an American former astronaut, engineer and fighter pilot. He made three spacewalks as pilot of the 1966 Gemini 12 mission. As the Lunar Module Eagle pilot on the 1969 Apollo 11 mission, he and mission commander Neil Armstrong were the first two people to land on the Moon. 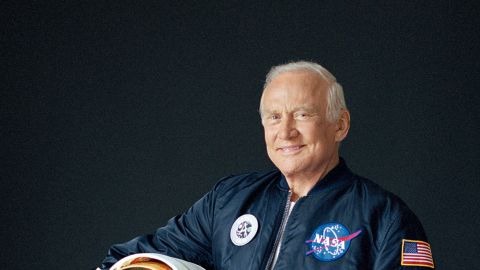 My thirty-first commercially published novel came out in September 2013. I've published about 5 million words that I got paid for. So I'm an abundantly published very obscure writer.

For readers who are wondering where to start with my work, the most common suggestions are Orbital Resonance, A Million Open Doors, Mother of Storms, Encounter with Tiber, or Tales of the Madman Underground. However, almost no one likes all five of those books--I write a wider range than most people read--so you might want to flip a few pages before buying. My most popular have been Directive 51, Mother of Storms, and the two collaborations with Buzz Aldrin. My 3 most popular series begin with A Million Open Doors, Directive 51, and Patton's Spaceship. Nearest my heart are probably One for the Morning Glory, Tales of the Madman Underground, and The Sky So Big and Black. And the most fun was had in writing Gaudeamus, Payback City, and Raise The Gipper!

I used to teach in the Communication and Theatre program at Western State College. I got my PhD at Pitt in the early 90s, masters degrees at U of Montana in the mid 80s, bachelors at Washington University in the 70s; worked for Middle South Services in New Orleans in the early 80s. For a few years I did paid blogging mostly about the math of marketing analysis at TheCMOSite and All Analytics. More recently, I covered advanced technology, especially space, stories in the Government section of Information Week.

I used to think I was the only paid consulting statistical semiotician for business and industry in the world, but I now know four of them, and can find websites for about ten more. Statistical semiotics is about the ways in which the characteristics of a population of signs come to constitute signs themselves. It has applications in marketing, poll analysis, and annoying the literary theorists who want to keep semiotics all to themselves and spend their time studying individual signs and the processes around them in very deep detail. It also shouldn't be confused with computational semiotics, which was about how software could parse complex signs to communicate with humans and other software. Just to make it a bit more confusing, both statistical and computational semiotics are being gradually subsumed into natural language processing, which in turn seems to be being absorbed into data science. Someday all universities will just have a Department of Stuff and that's what everyone will major in.

Semiotics is pretty much what Louis Armstrong said about jazz, except jazz paid a lot better for him than semiotics does for me. If you're trying to place me in the semiosphere, I am a Peircean (the sign is three parts, ), a Lotmanian (art, culture, and mind are all populations of those tripartite signs) and a statistician (the mathematical structures and forms that can be found within those populations of signs are the source of meaning). Recently I've begun working on a certificate in Data Science for pretty much the same reason that the Scarecrow needed a diploma and the Lion needed a medal.

I have been married three times, and divorced twice, and I believe that's quite enough in both categories. I'm a hobby cook, sometime theatre artist, and still going through the motions after many years in martial arts.

VERY FINE GUARANTEED. Very Fine without any flaws. The condition is of the highest quality for both the dust-jacket and the hardcover. The dust-jacket is now protected in a brand new archival acid-free Mylar sleeve. Unread with square and tight spine. No bookplates attached or indication of any removed. Tiny chip in one corner.