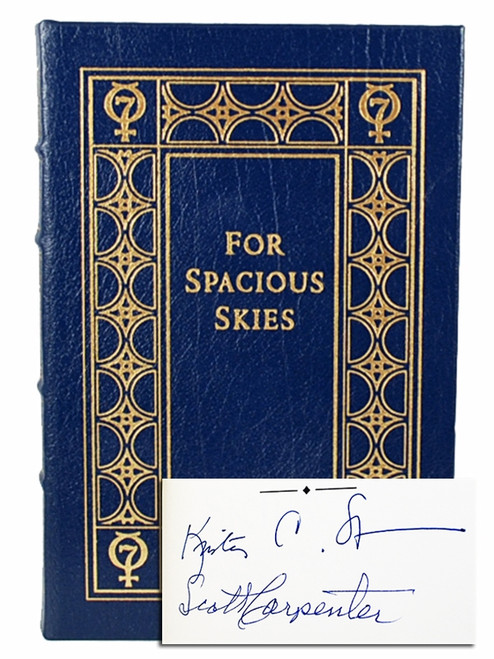 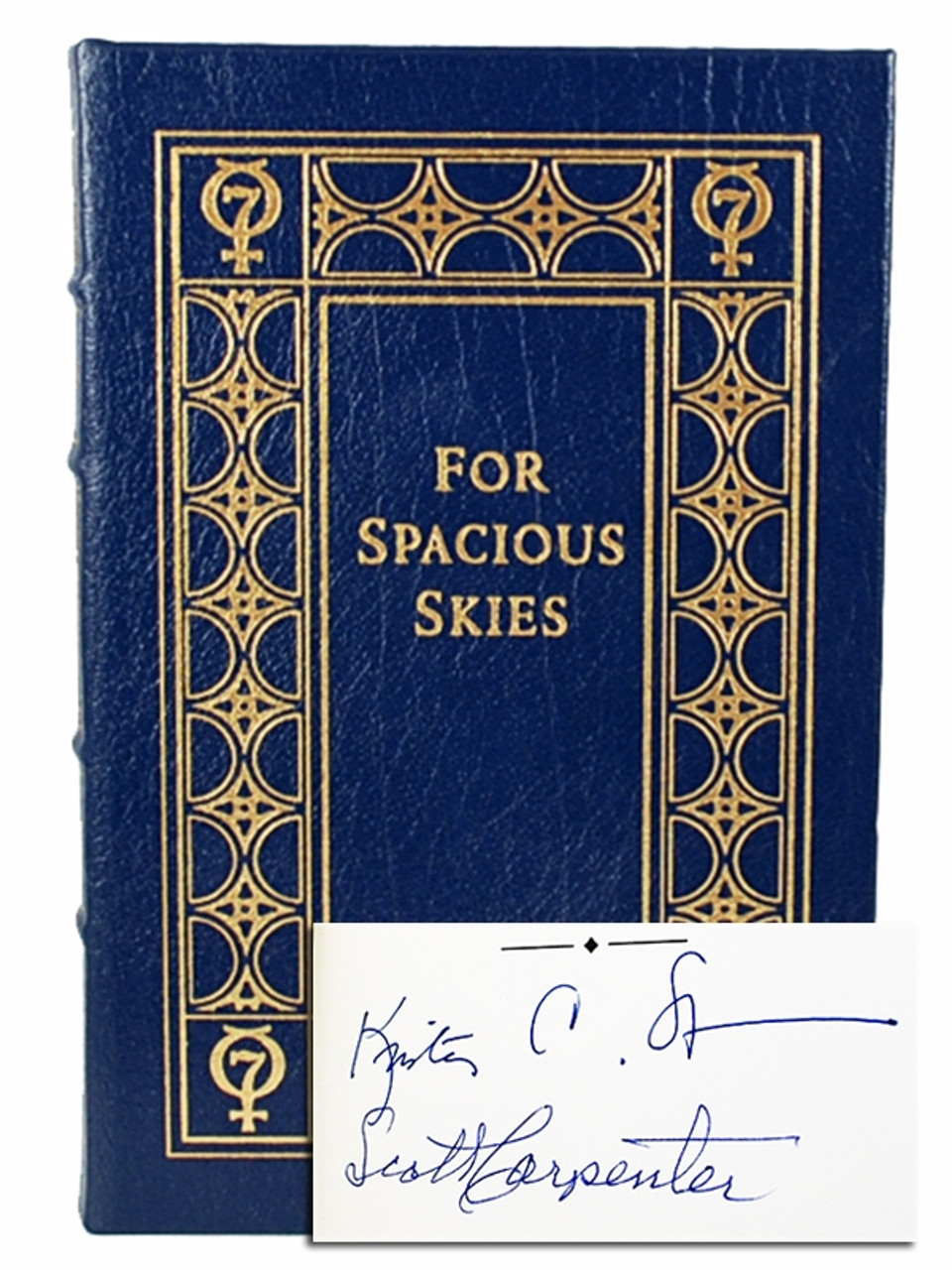 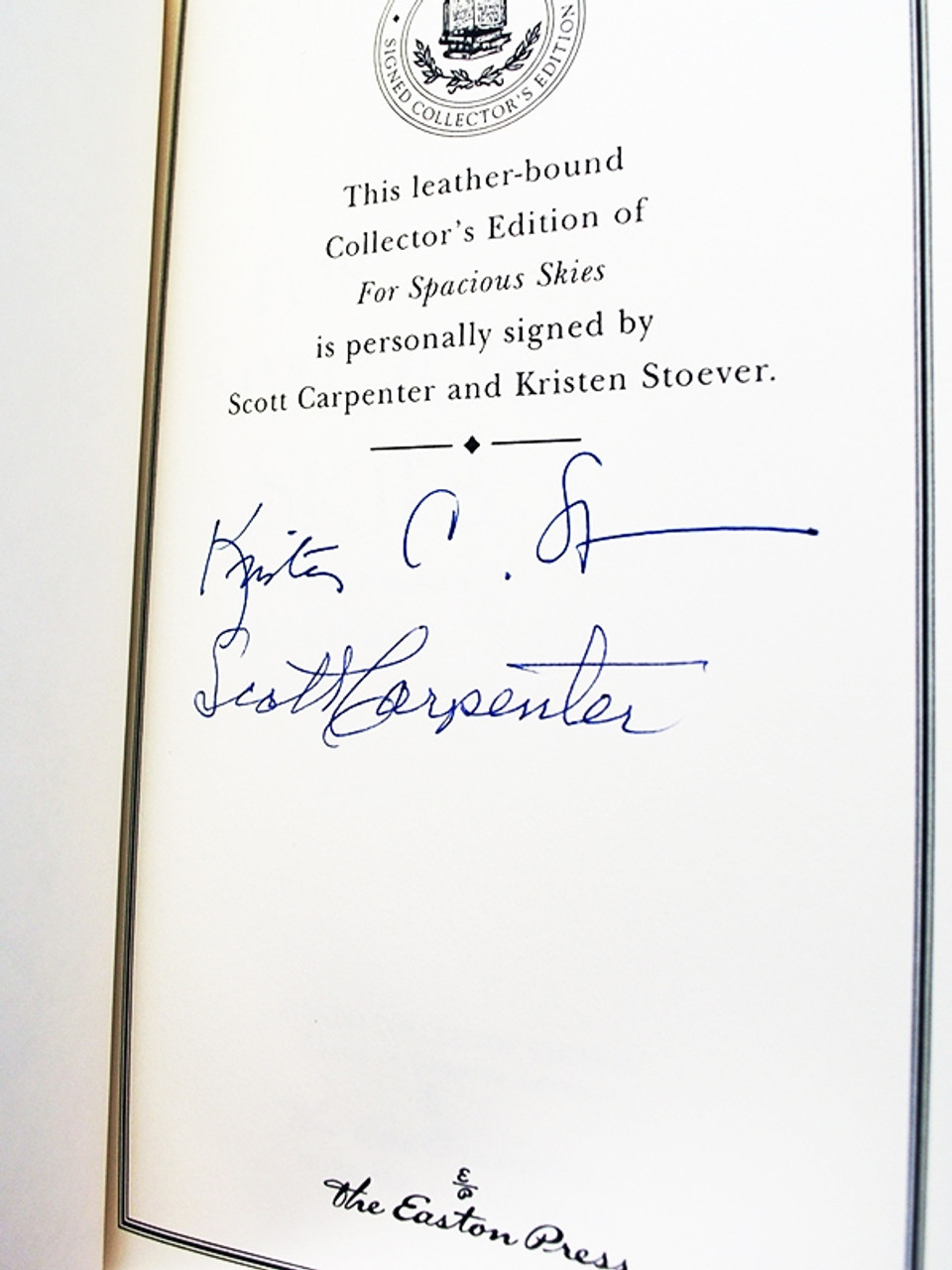 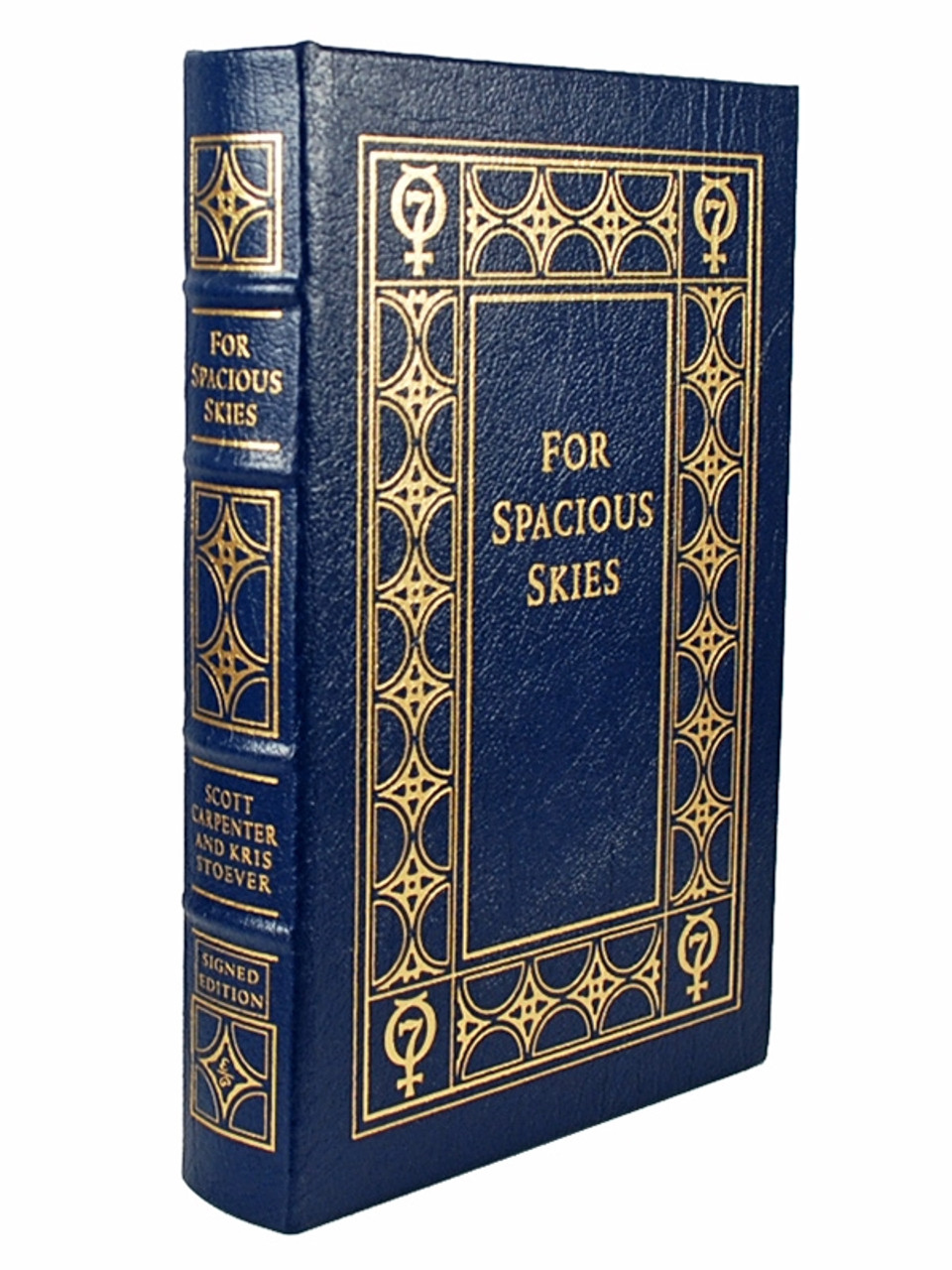 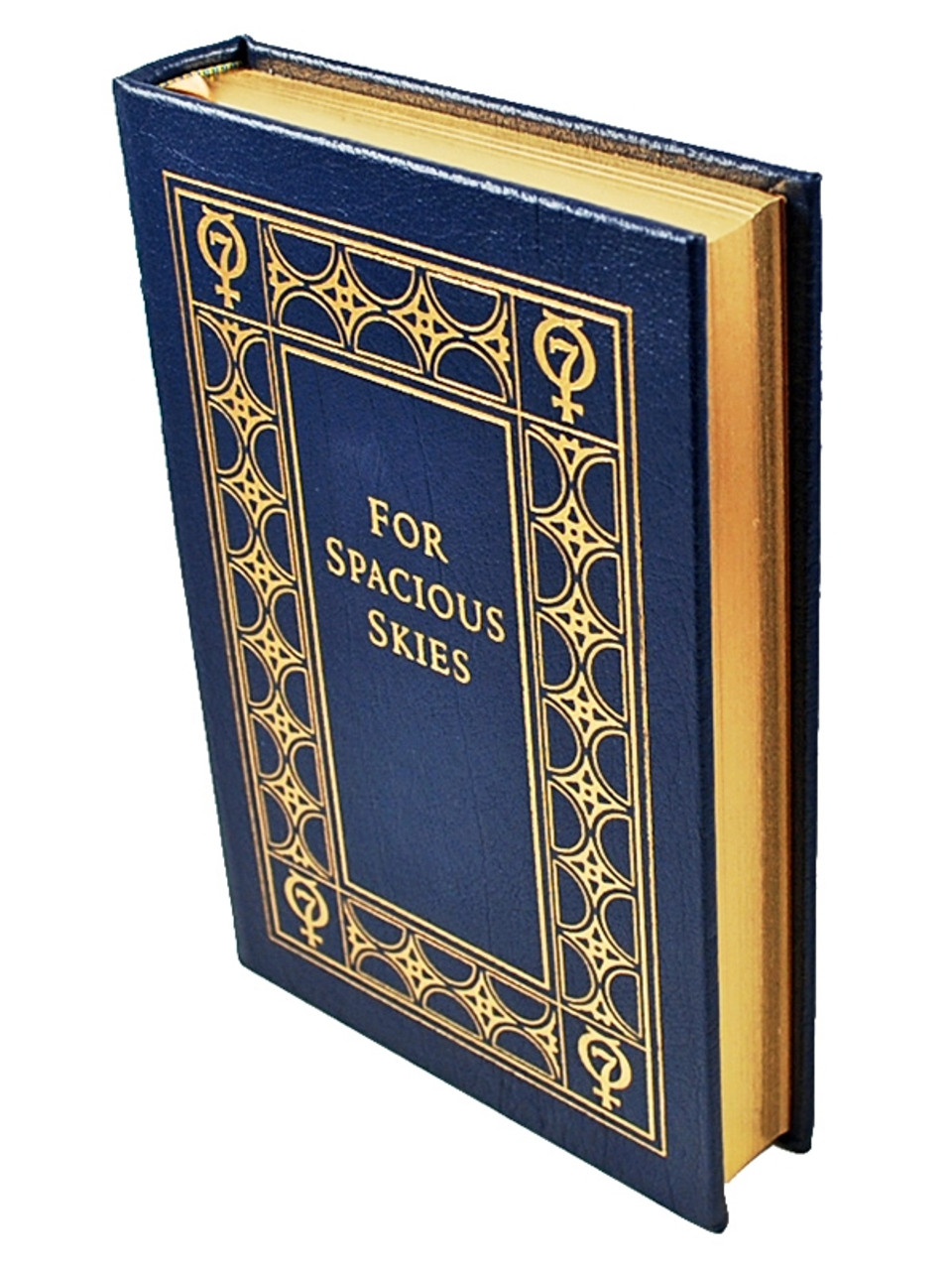 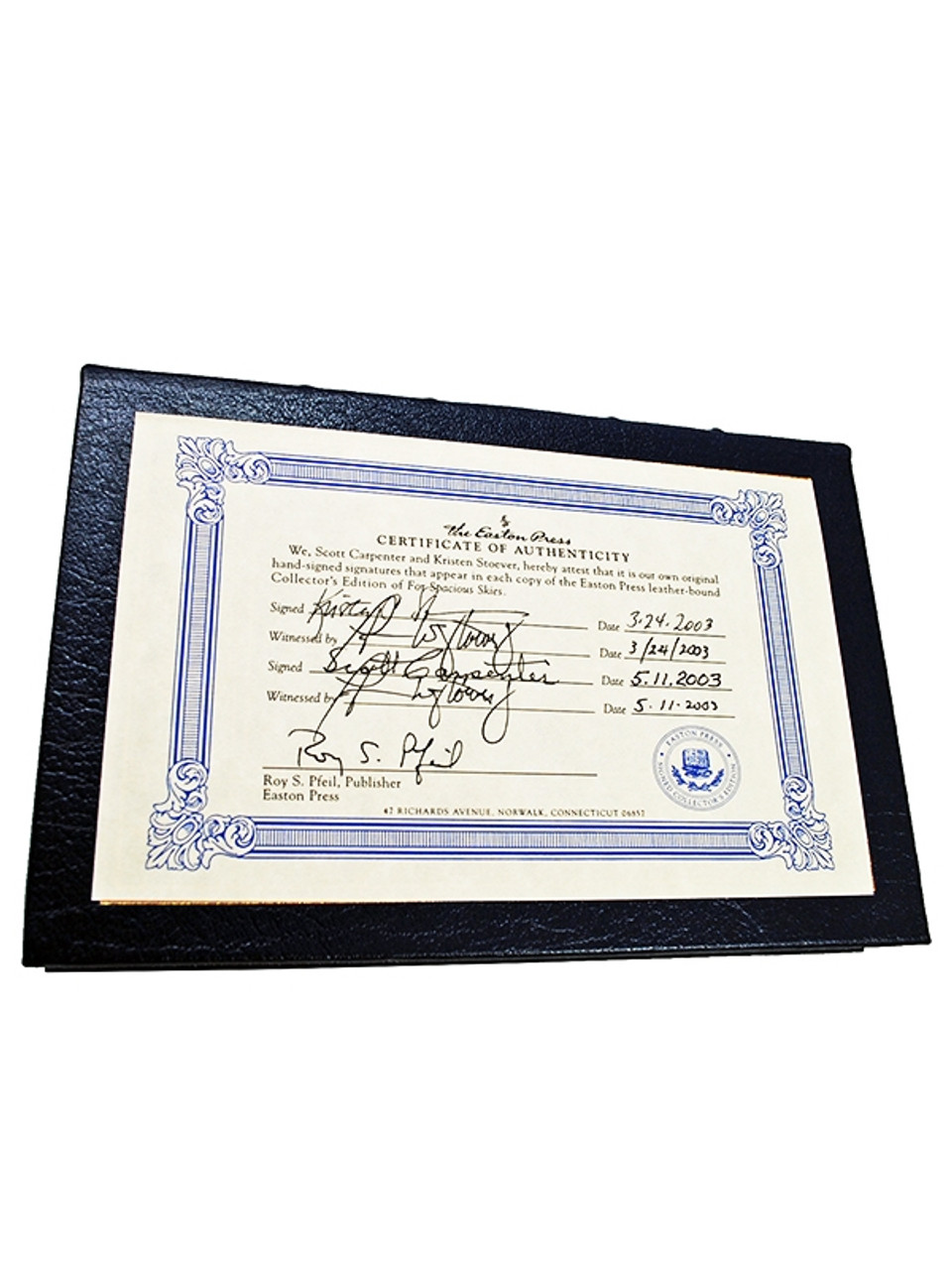 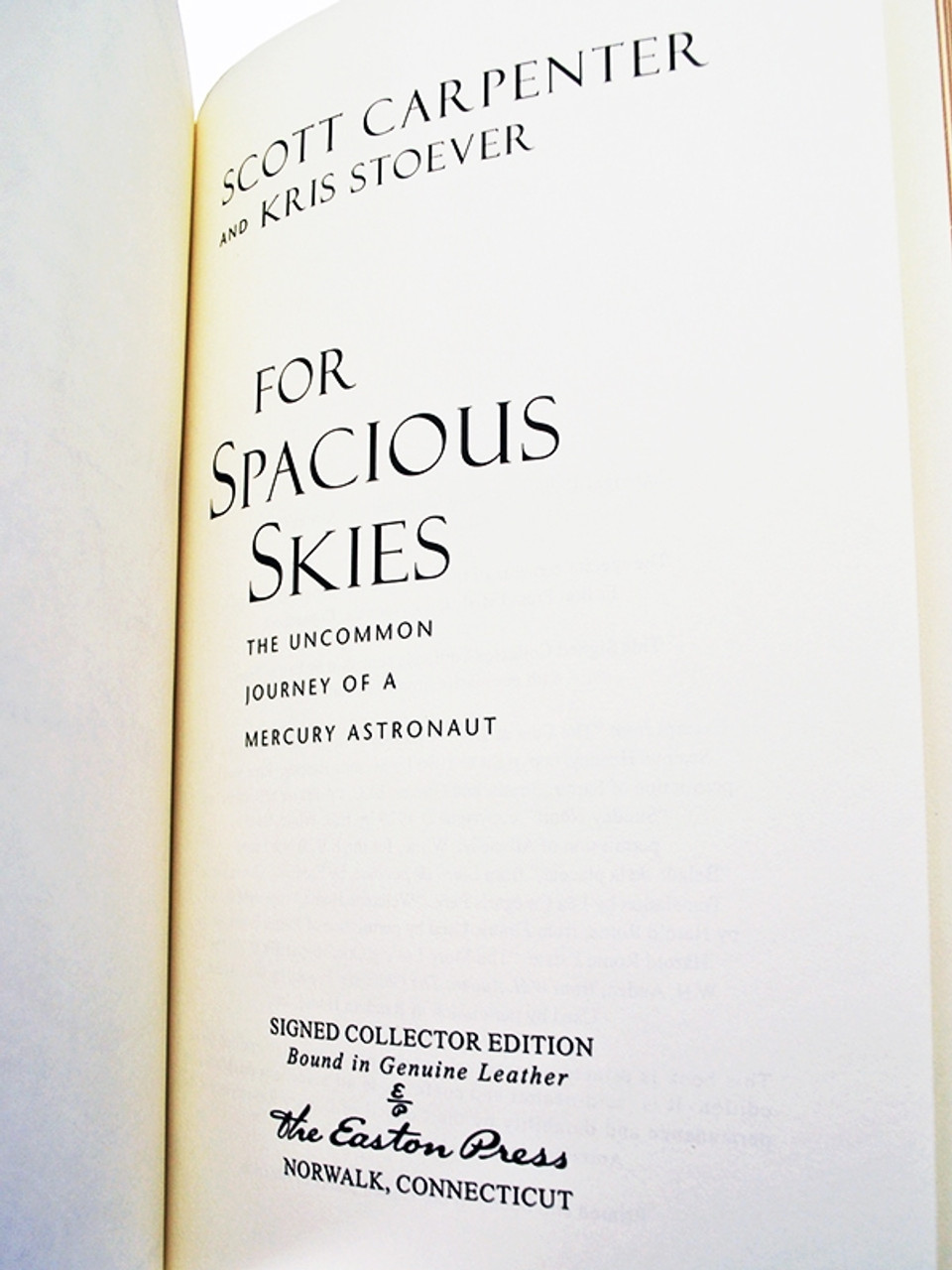 Personally hand signed by astronaut Scott Carpenter along with his daughter Kris Stoever on a special title page. Chris Carpenter is one of America's seven "Right Stuff" Mercury astronauts.

Malcolm Scott Carpent is an engineer, former test pilot, astronaut, and aquanaut. He is best known as one of the original seven astronauts selected for NASA's Project Mercury in April 1959. Scott Carpenter was the second American to orbit the Earth and the fourth American in space, following Alan Shepard, Gus Grissom, and John Glenn. Carpenter and Glenn are the last living members of the Mercury Seven.

On May 24, 1962, the tiny spacecraft Aurora 7 carried Scott Carpenter into space, American history, and a lifetime of controversy. For Spacious Skies offers this Mercury astronaut's never-before-told account of life at NASA. He takes us through the mysteries of the selection process, to the desert for survival training, into the simulator, and onto the contour couch. He describes, in stunning detail, the flight that made him the second American to orbit the Earth.

During the early days of the space program, each mission helped to determine NASA's research progress, the efficiency of its design, and its status in the race to the moon; when Aurora 7 began to malfunction, everyone at hand frantically tried to detect the cause. What was ultimately found to be a glitch in Aurora 7's pitch horizon scanner forced the astronaut to overshoot his expected landing site by 250 miles and later brought all decisions made during the flight under intense scrutiny. Scott Carpenter, with his daughter, Kris Stoever, clears up all lingering questions about his flight while telling the history of an amazing frontier family and the strength of the American pioneer spirit.

Advance praise for For Spacious Skies

"A rich story of remarkable accomplishment and sacrifice. Not only do we learn about the early years of space travel, we learn how one man became one of America's modern heroes." --John Glenn

"For Spacious Skies is more than the adventures of the Mercury astronaut and Deep Submergence aquanaut Scott Carpenter. It is the heart-breaking story of a family torn apart and a boy called Buddy who flew solo into space, and lived for an eternity in the depths of the sea, looking for his father." -- Tom Wolfe, author of The Right Stuff

"By many miles the best memoir of Project Mercury. For Spacious Skies is a splendid, writerly combination of personal and national journeying, full of thoughtfulness, thrills, and a deep, dignified emotion. For anyone who remembers the first light of the space age�or had the bad luck of being too young to live through it�this is the indispensable book." --Thomas Mallon, author of Aurora 7 and Mrs. Paine's Garage

Scott Carpenter is one of the seven original "Right Stuff" astronauts. The fourth American in space, the second to orbit the Earth (John Glenn was the first), Carpenter went on after the Mercury Project to explore the oceans, commanding the underwater teams in the U.S. Navy's SeaLab II program. He lives in New York City and in Vail, Colorado.

Kris Stoever was six years old when her father orbited the Earth on May 24, 1962. Since her graduation from Georgetown University with a degree in history, she has worked as an editor and writer. She lives with her husband and daughter in Denver.

Very Fine without any flaws. The condition is of the highest quality. No bookplates attached or signs of any removed. Includes original COA and unattached bookplate for your own personalization. The volume is free of any marks, scratches, blemishes to the gilded page edges. (not sealed as shown)