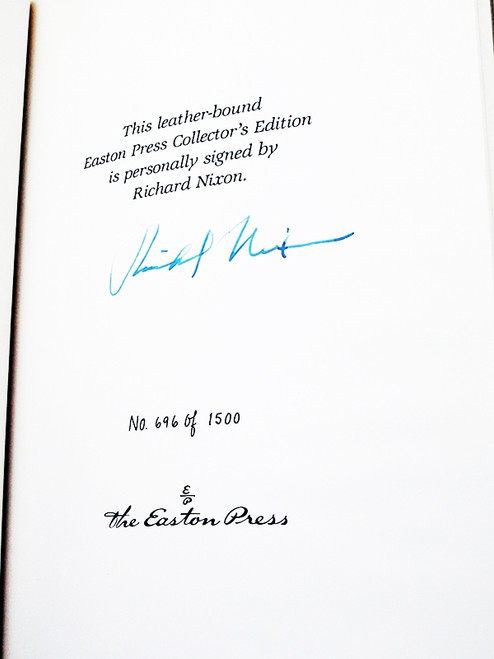 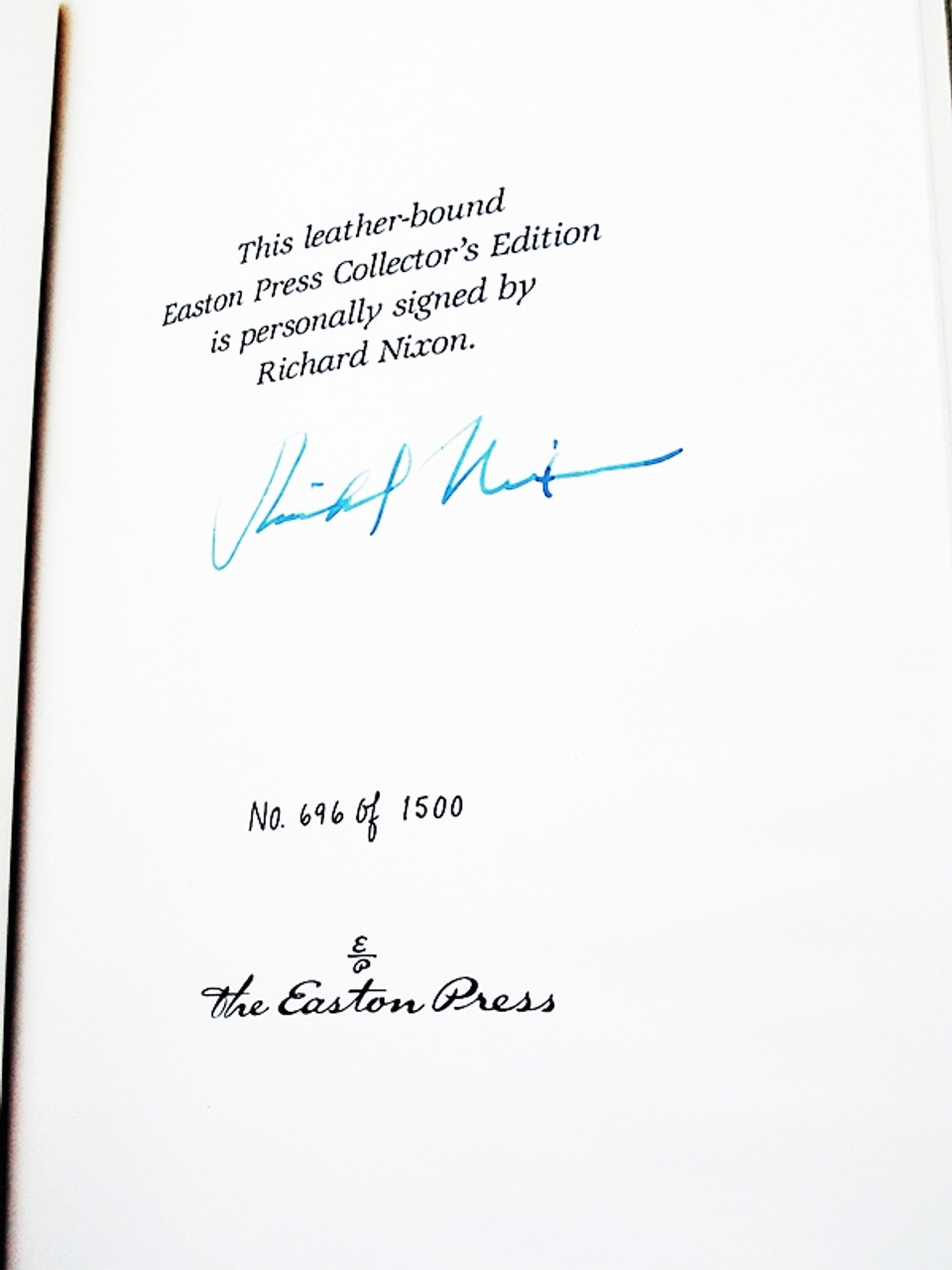 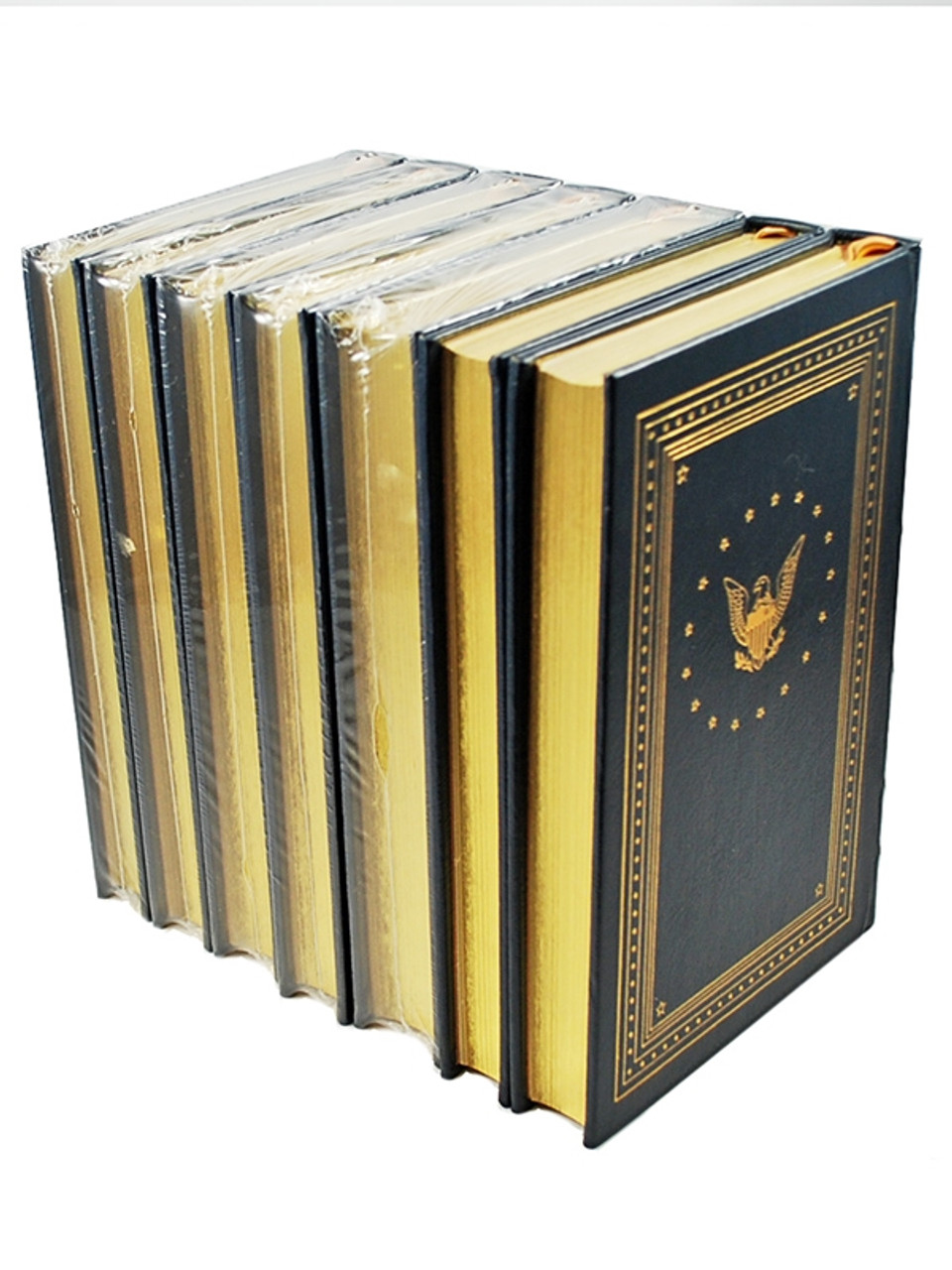 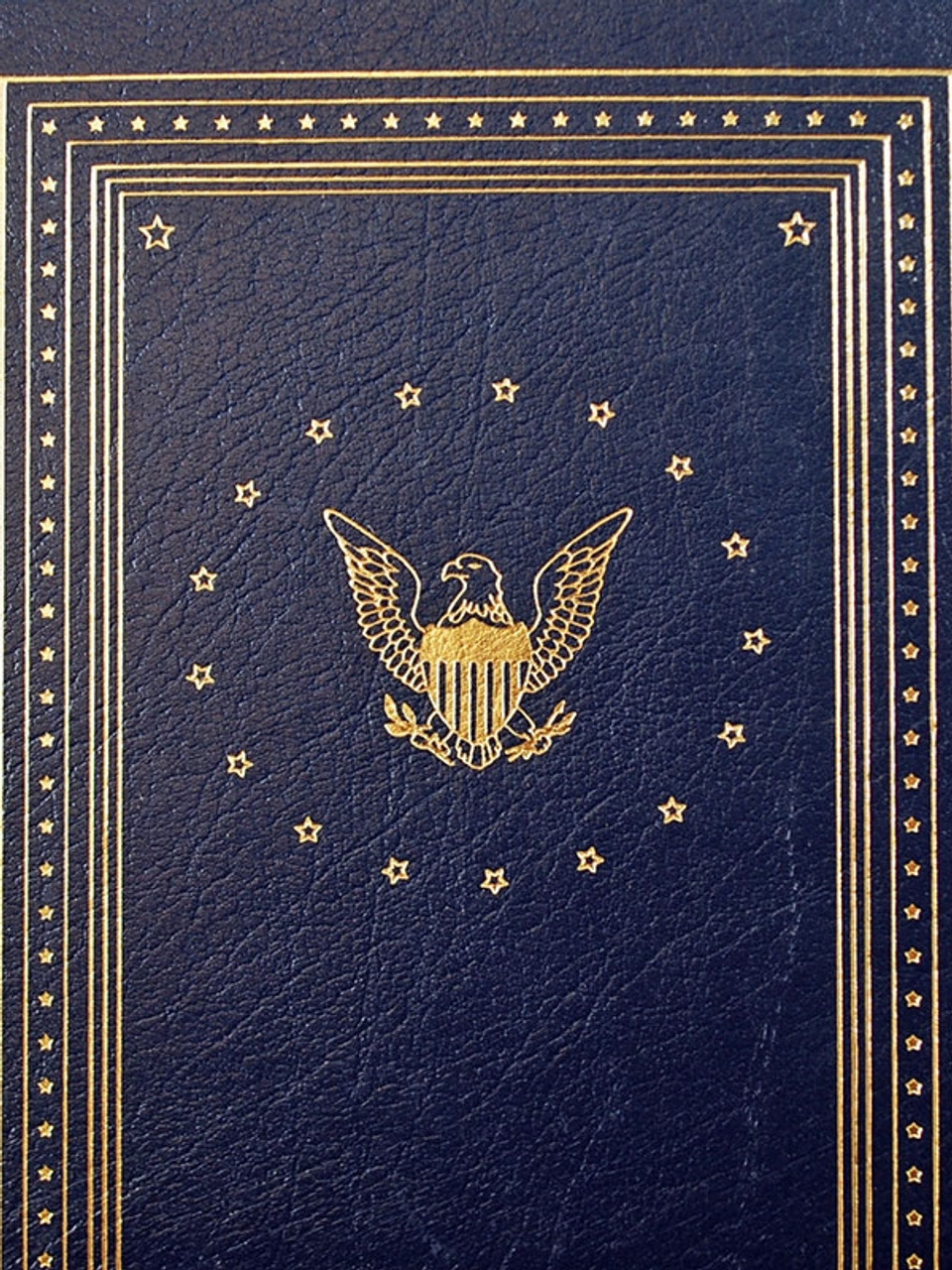 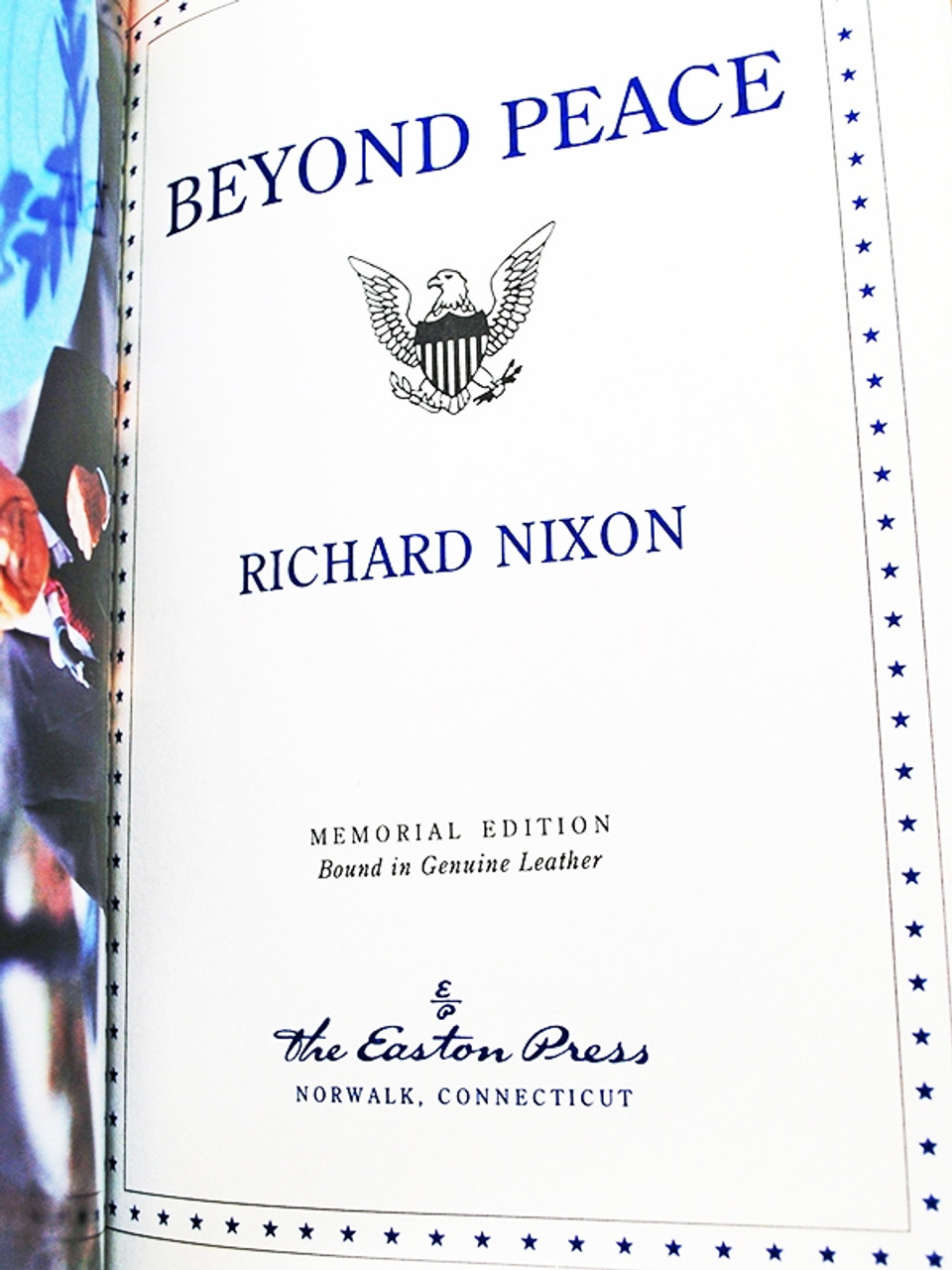 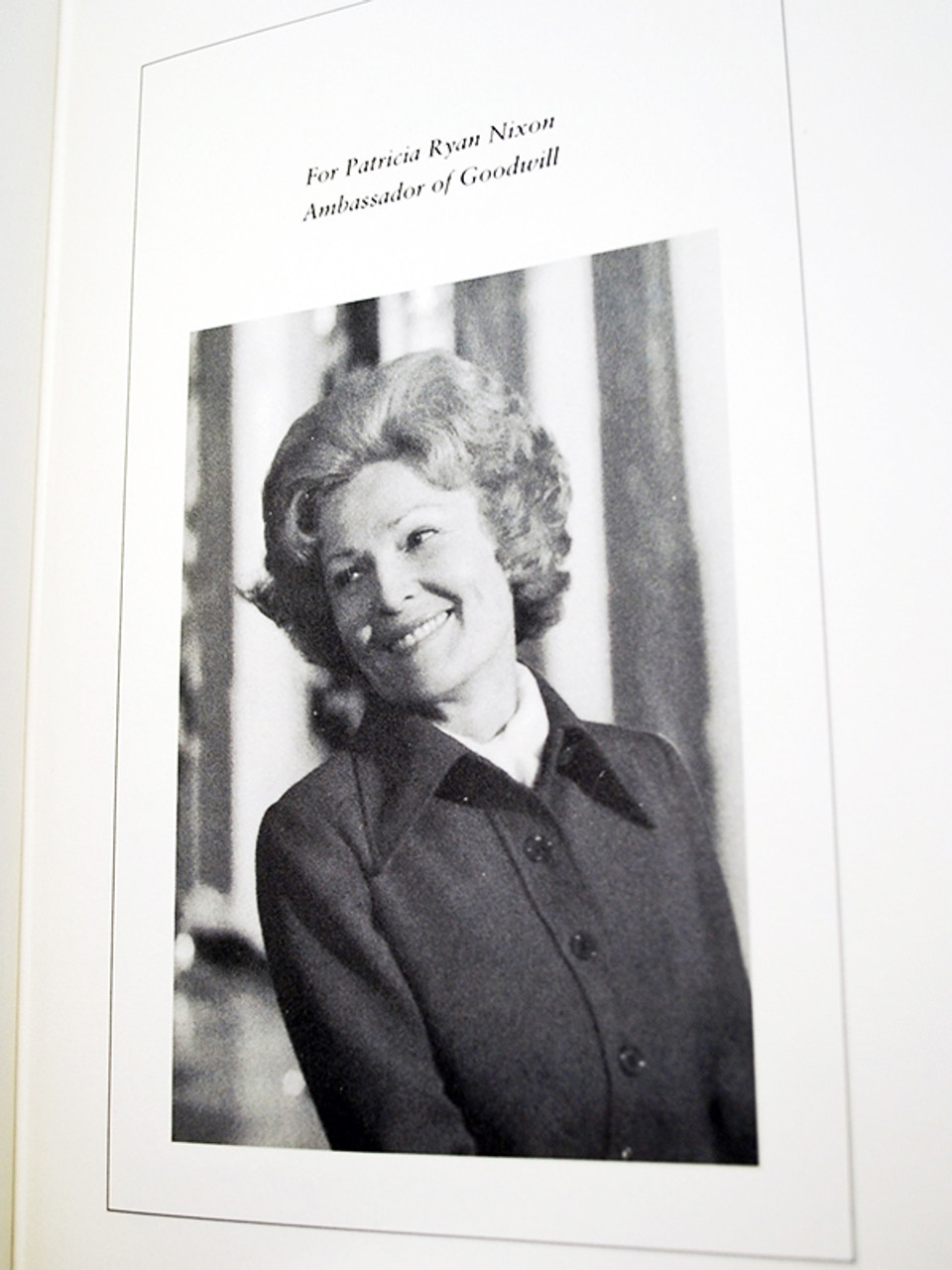 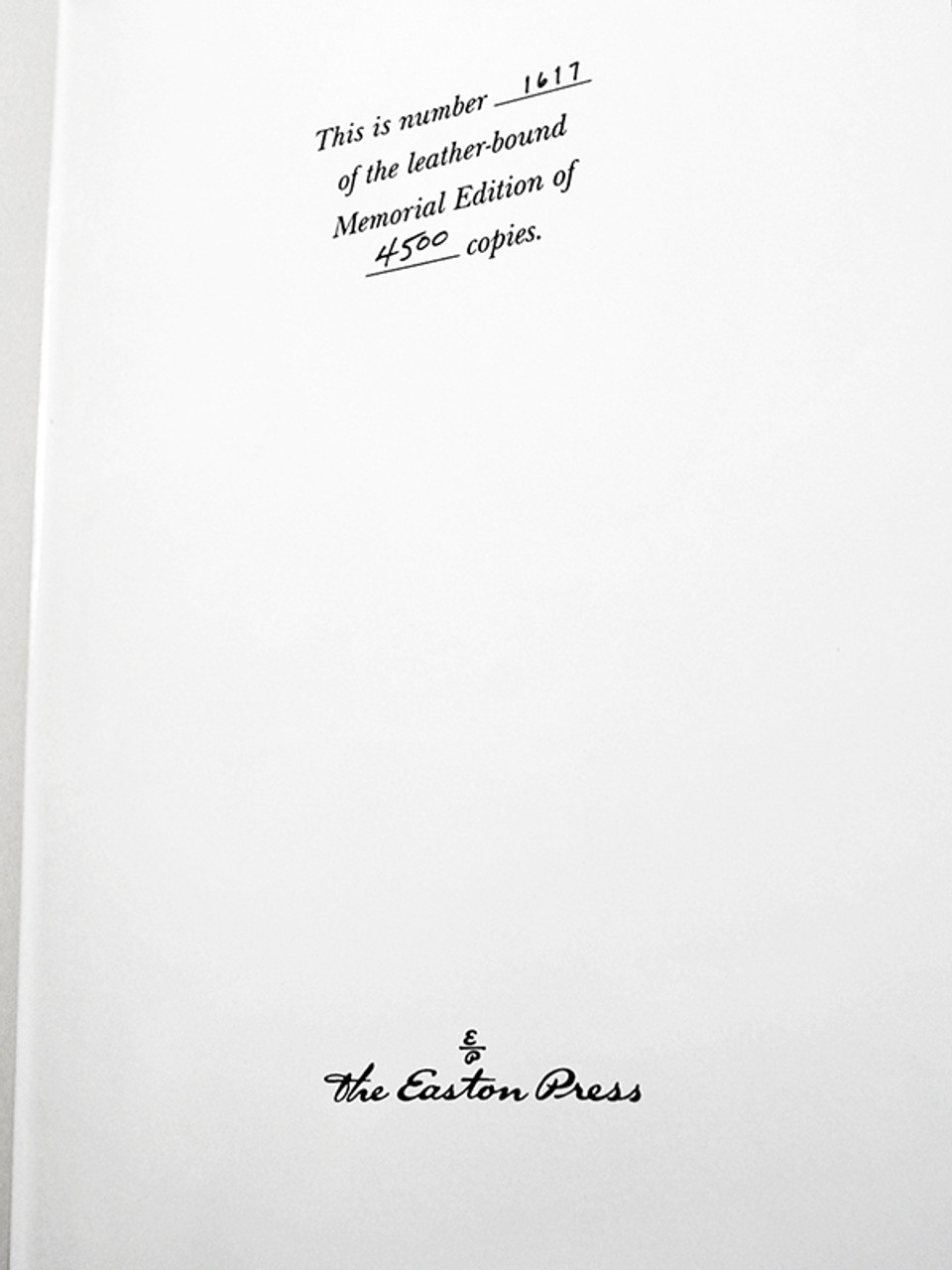 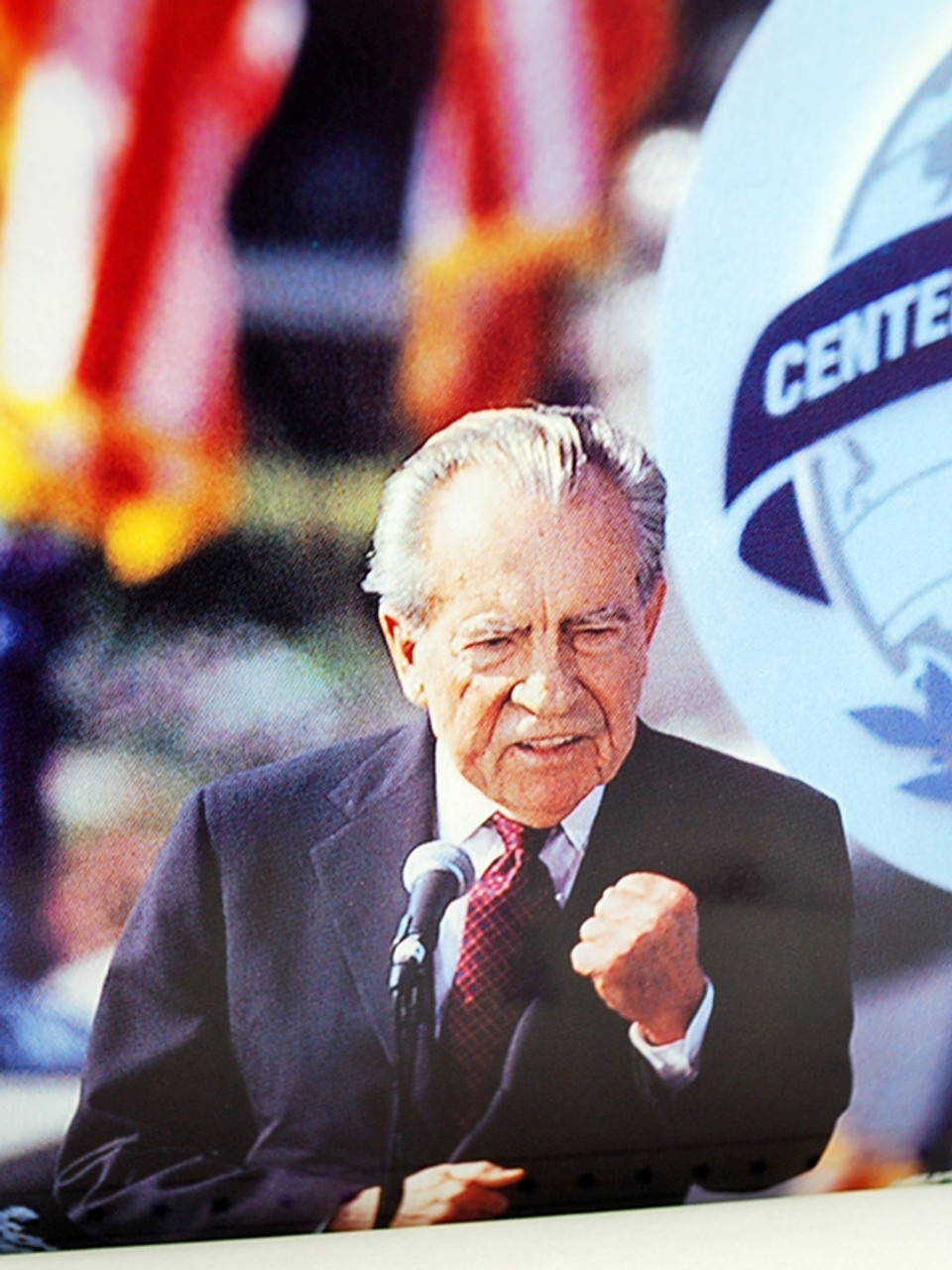 A Magnificent Signed Collector's Set for your Presidential Library

This set has been luxuriously bound in full genuine navy leather. A complete set of seven matching volumes in Very Fine condition. The volumes are octavos in dark blue leather with gilt frame along with 6-band embossed spines with gold letters. A wonderful collection for your presidential library.

This particular set was available by special invitation from Easton Press and has long been sold out.

Nixon was born in Yorba Linda, California. After completing his undergraduate work at Whittier College, he graduated from Duke University School of Law in 1937 and returned to California to practice law. He and his wife, Pat Nixon, moved to Washington to work for the federal government in 1942. He subsequently served in the United States Navy during World War II. Nixon was elected to the House of Representatives in 1946 and to the Senate in 1950.

His pursuit of the Hiss Case established his reputation as a leading anti-communist, and elevated him to national prominence. He was the running mate of Dwight D. Eisenhower, the Republican Party presidential nominee in the 1952 election. Nixon served for eight years as vice president. He waged an unsuccessful presidential campaign in 1960, narrowly losing to John F. Kennedy, and lost a race for Governor of California in 1962. In 1968 he ran again for the presidency and was elected.

Six Crises is the first book written by Richard Nixon, who later became the thirty-seventh president of the United States. It was published in 1962, and it recounts his role in six major political situations. Nixon wrote the book in response to John F. Kennedy's Pulitzer Prize-winning Profiles in Courage which had greatly improved Kennedy's public image.


About "The Real War"

In this landmark 1980 bestseller, Richard Nixon presents an effective analysis of strategic shortcomings and a prescription for renewed strength.

Nixon’s tough-minded views discussed in this book became a blueprint for Ronald Reagan’s military buildup and strategic initiatives—which ultimately paved the way for the end of the Cold War.

Highly relevant to contemporary times, Nixon argues persuasively that America must assume a role of global leadership to make sure the war of annihilation never happens. The economic, material, and technological capacities to prevail are not enough, he cautions, without the resolve of national will.

He utilizes the lessons of history—from the Mongolian invasion of Russia to the revolution in Iran—to instruct the future. From his unique perspective as the former chief executive of the nation, he tells us how we can use our political, economic, and military strengths to turn the tide.


About "Seize The Moment"

In another cogent analysis of U.S. foreign policy (see his 1999: Victory Without War , LJ 6/1/88), Nixon argues that the end of the Cold War doesn't justify a renewed U.S. isolationism. He counsels the "world's lone superpower" to seize the opportunity to insure its vital interests by distinguishing between its critical and peripheral interests, then matching its capabilities and national will to its identified needs. While debunking the view that the U.S. has peaked as a world power, Nixon is critical of "fight every foe" idealism and "woolly-headed" overexpectations of the United Nations in an economically interdependent 21st century world. Viewing human rights as a priority (critical but not strategic) and warning of the continued need for military power and strategic arms control, Nixon brings his substantial experience, travels, and conversations with world leaders to bear in chapters on the Soviet Union, Europe, the Pacific Triangle, the Muslim world, and the Southern Hemisphere (Asia, Africa, and Latin America). Highly recommended.

Beyond Peace is a manifesto for a new America, written with visionary insight and a realistic idealism by the 37th President of the United States—and only completed weeks before his death. In this last testament, Nixon offers a new agenda for the United States and defines its role in the complex post-Cold War era.

Nixon charts the course America should take in the future to ensure that the opportunities of this new era beyond peace are not lost. America’s issues, he argues, extend from a crisis of spirit which manifests itself in a corrosive entitlement mentality that he describes as “one of the greatest threats to our fiscal health, our moral fiber, and our ability to renew our nation.”

With his unrivaled experience in foreign affairs gained over many years as a statesman in the international arena, he gives answers to complex foreign issues facing the United States. And his intimate portraits and analyses of world leaders—past and present—offer us a unique, bird’s-eye view of leadership and international politics.

This book challenges us to seek more than just peace; it must be a mission that will unify and inspire the country, built on peace but able to transcend it.

The first five volumes are Very Fine, still sealed in the original shrink-wrap. Volume VI and VII are Very Fine without any flaws. Each volume is a wonderful bright clean copy, free of markings, writings, or stamps. No attached bookplates or indication of any removed. Unread books in mint condition.

A Unique Opportunity To Own The Entire Library of the Presidents, Complete in 82 Very Fine Volumes The Easton Press, Norwalk, CT. A complete set of 82 volumes. Each volume in this series is from