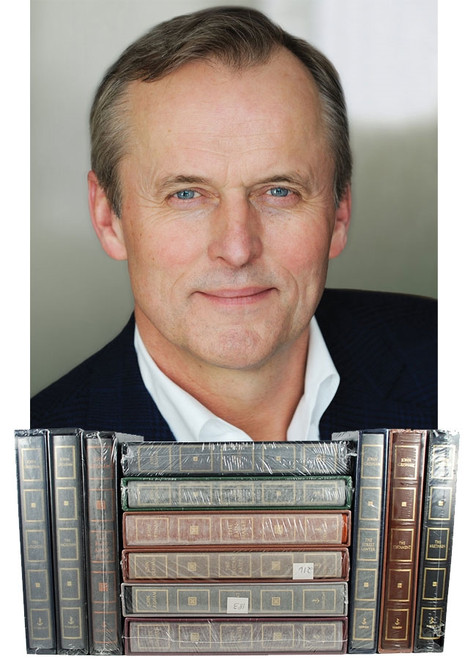 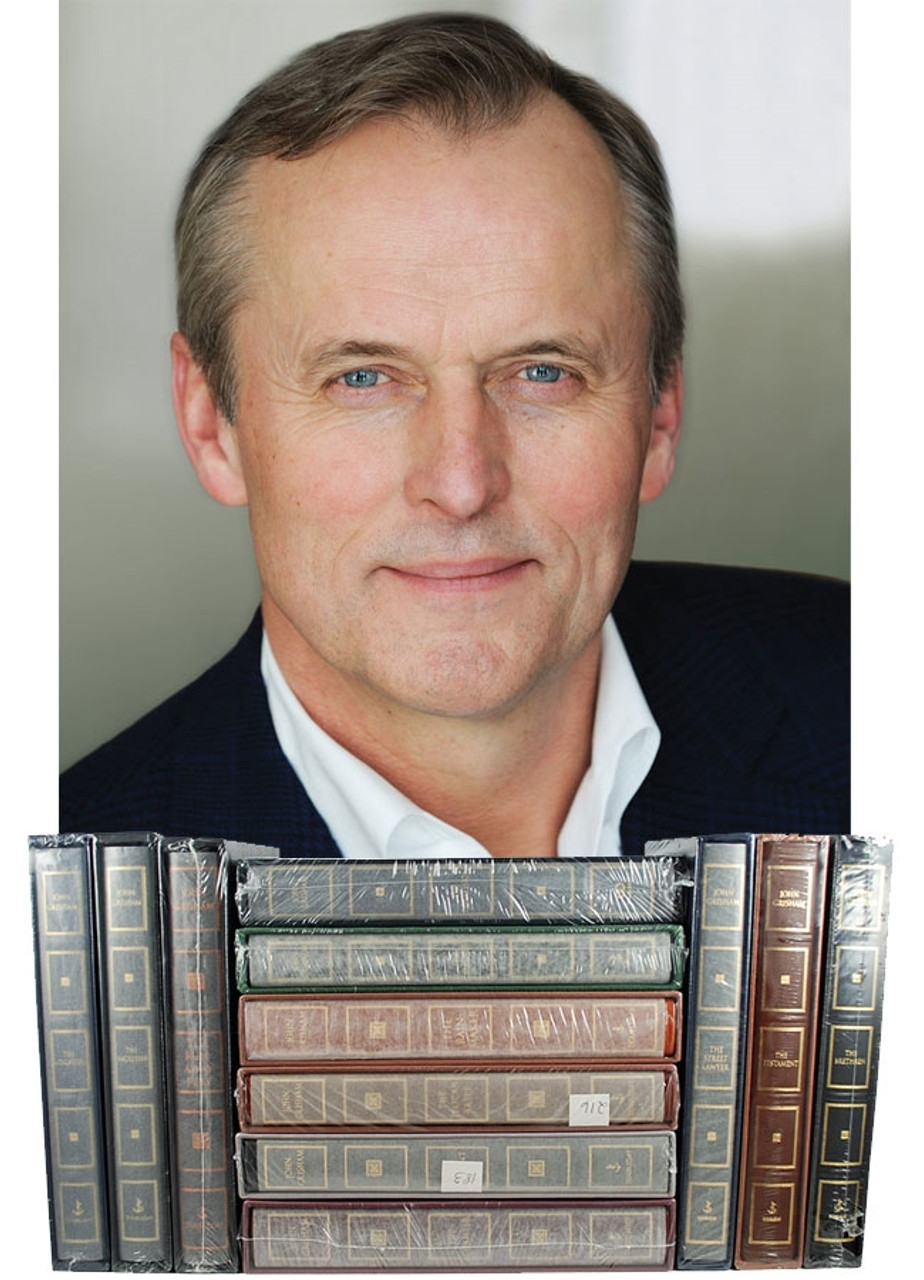 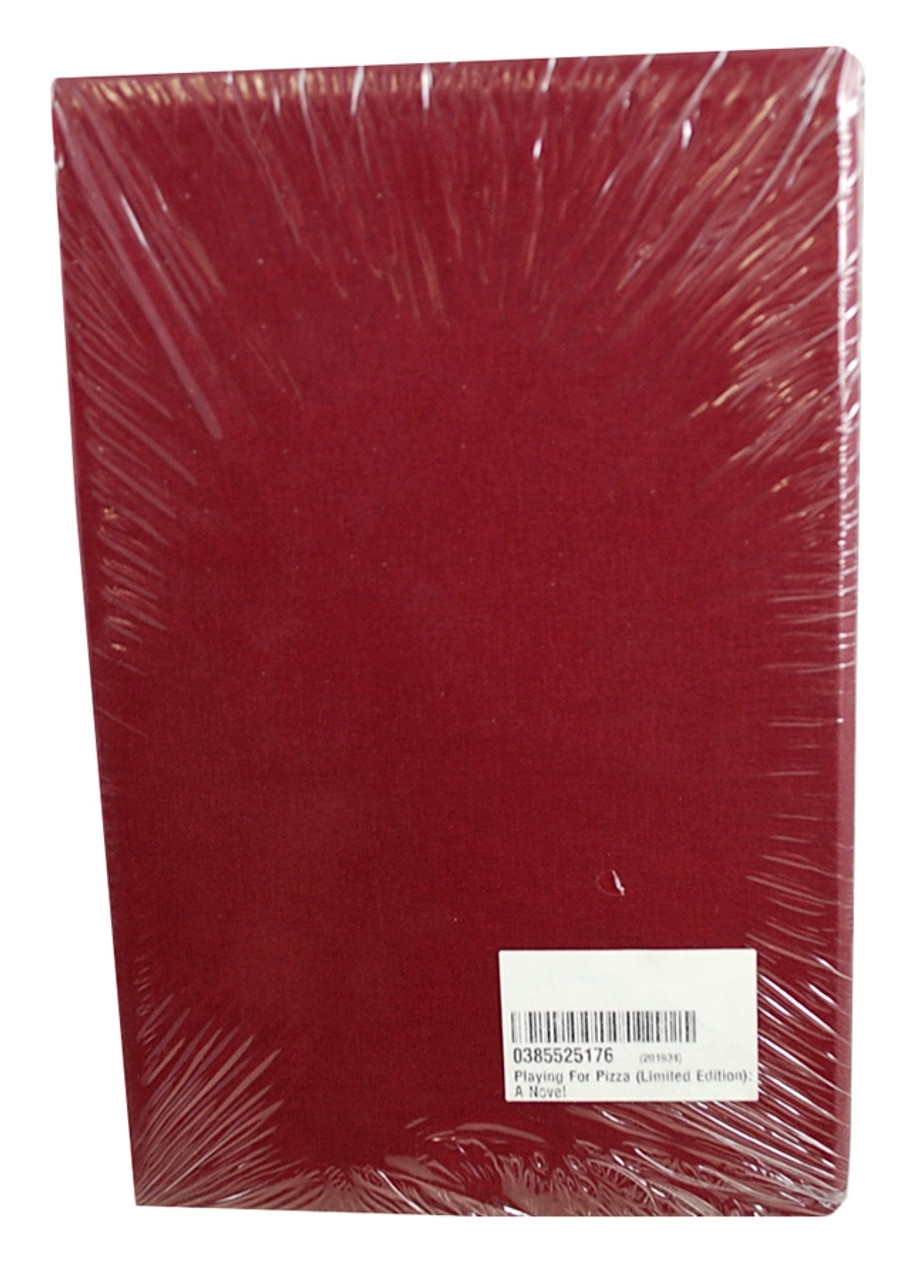 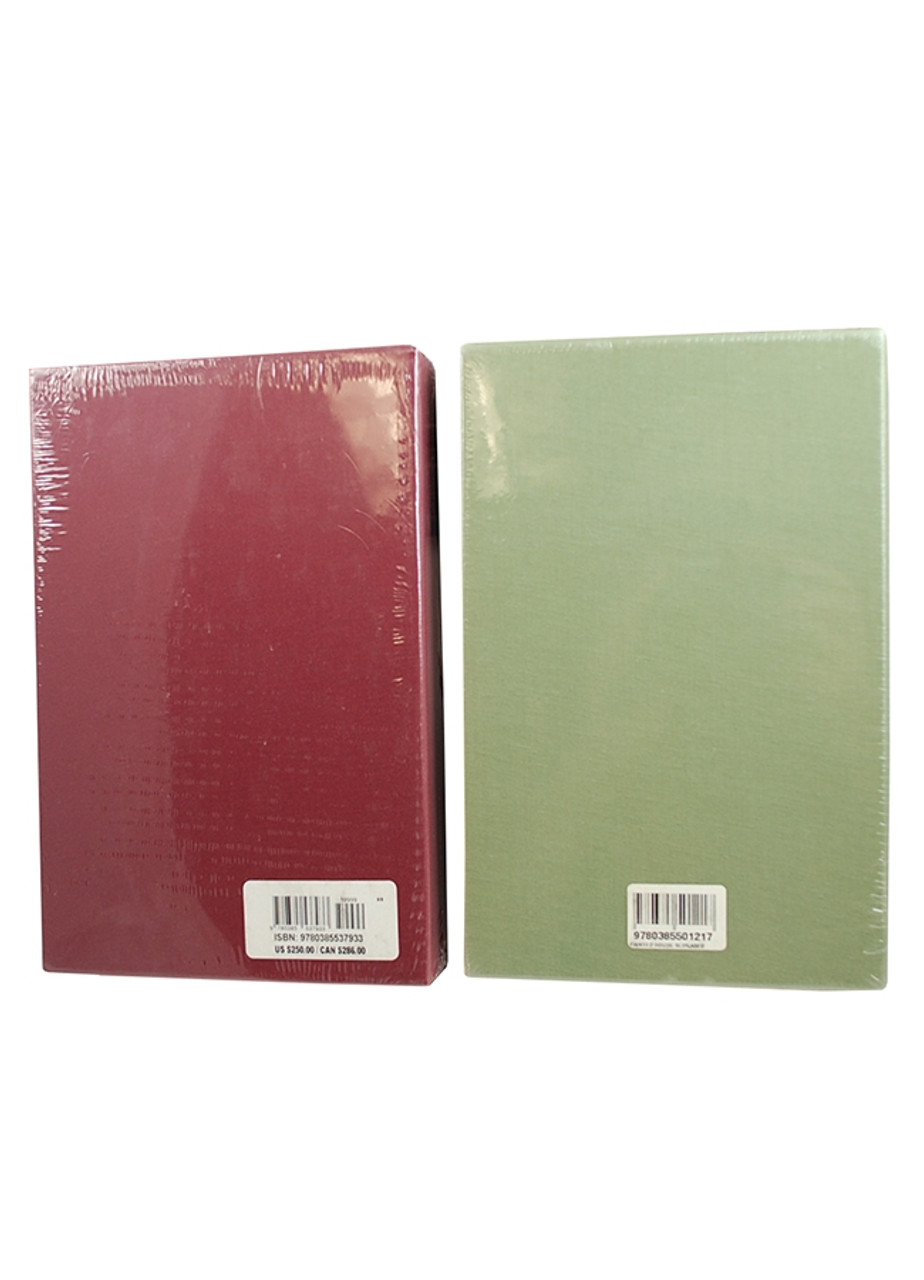 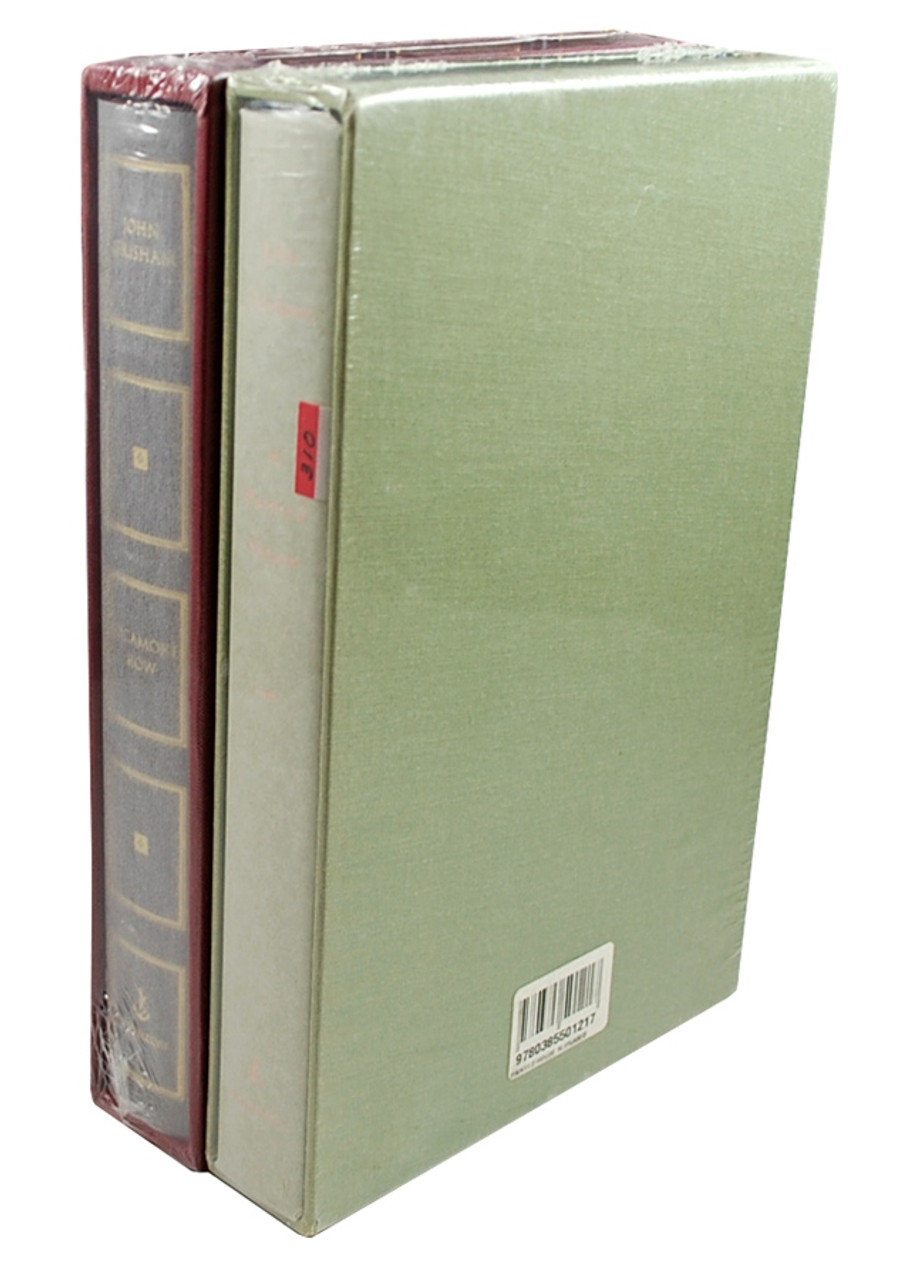 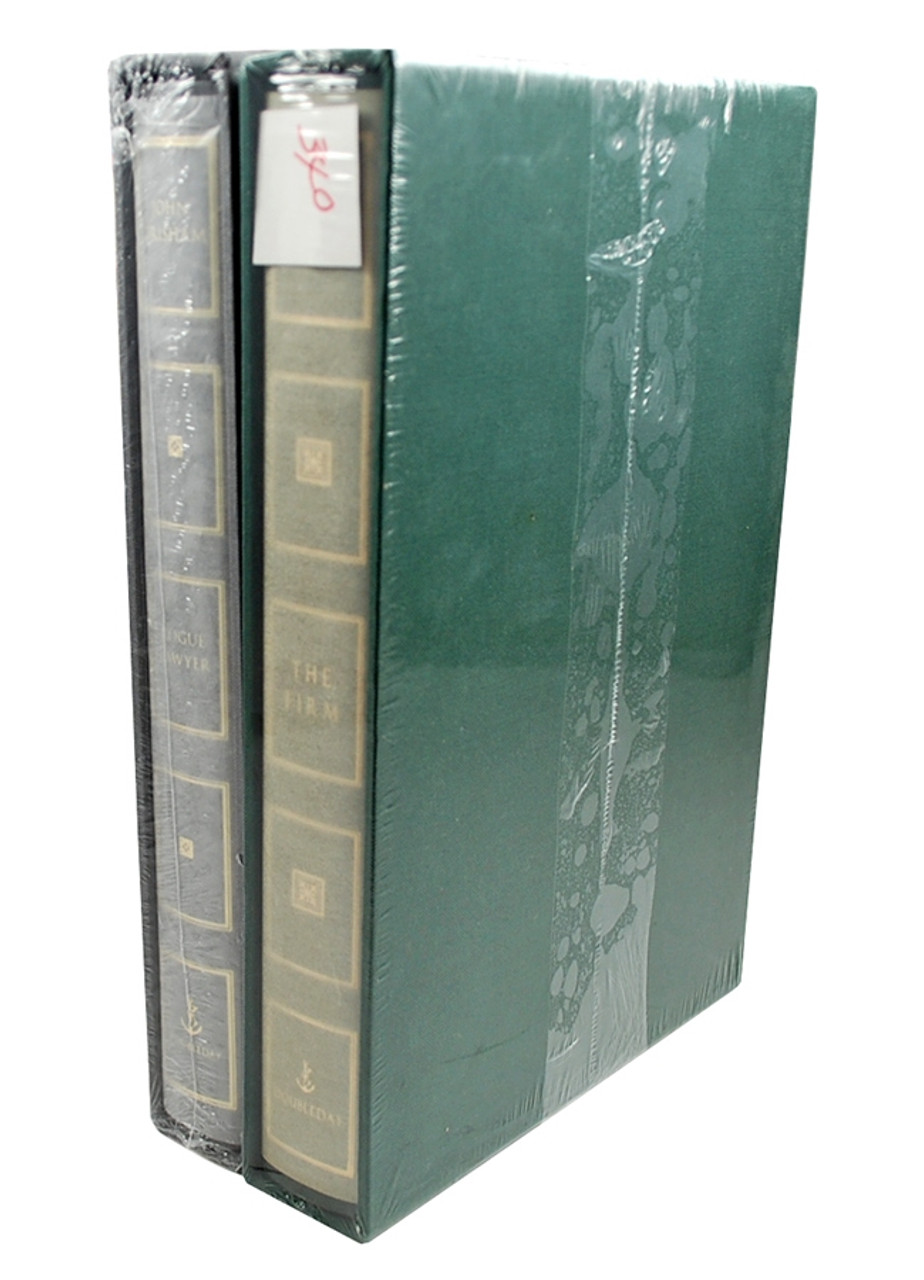 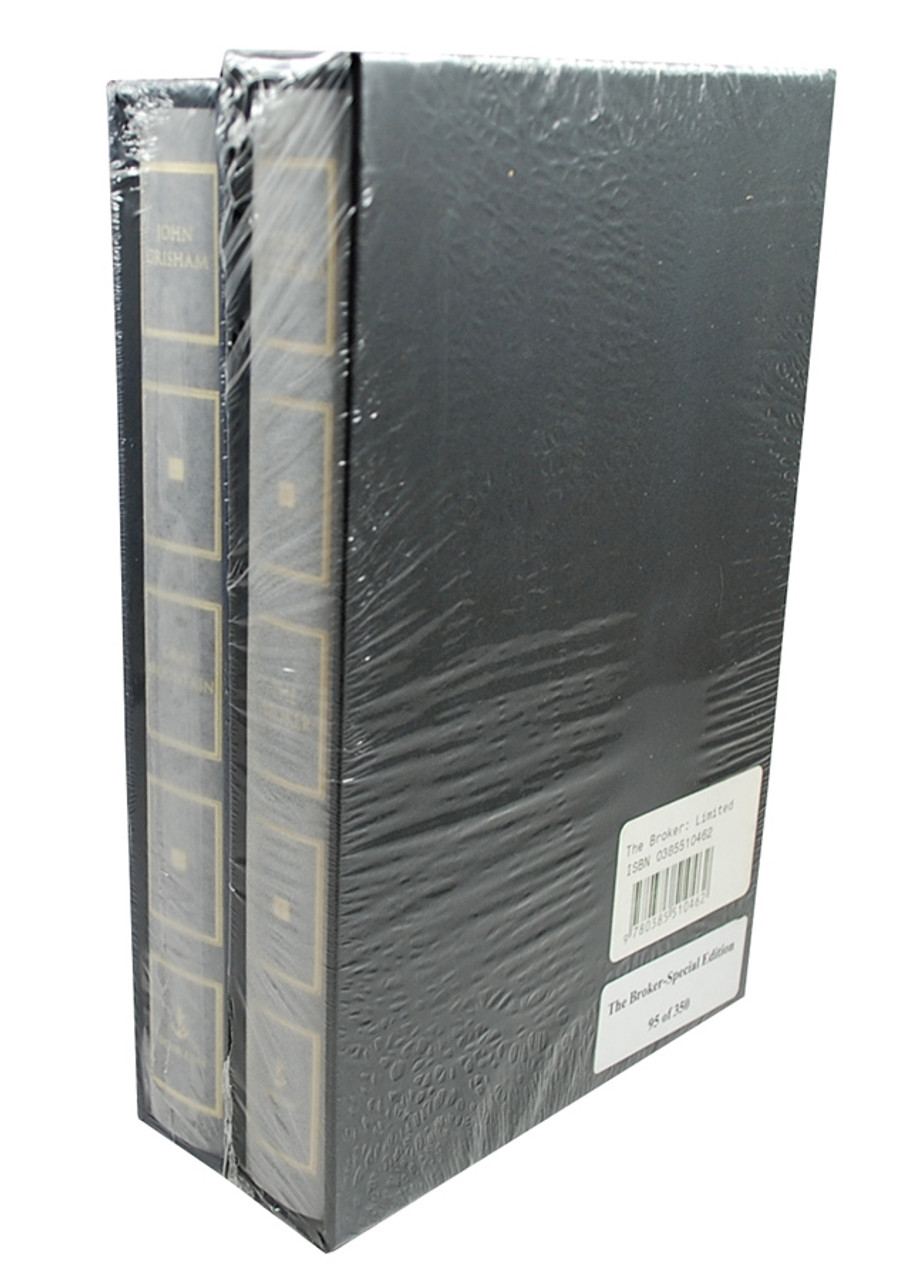 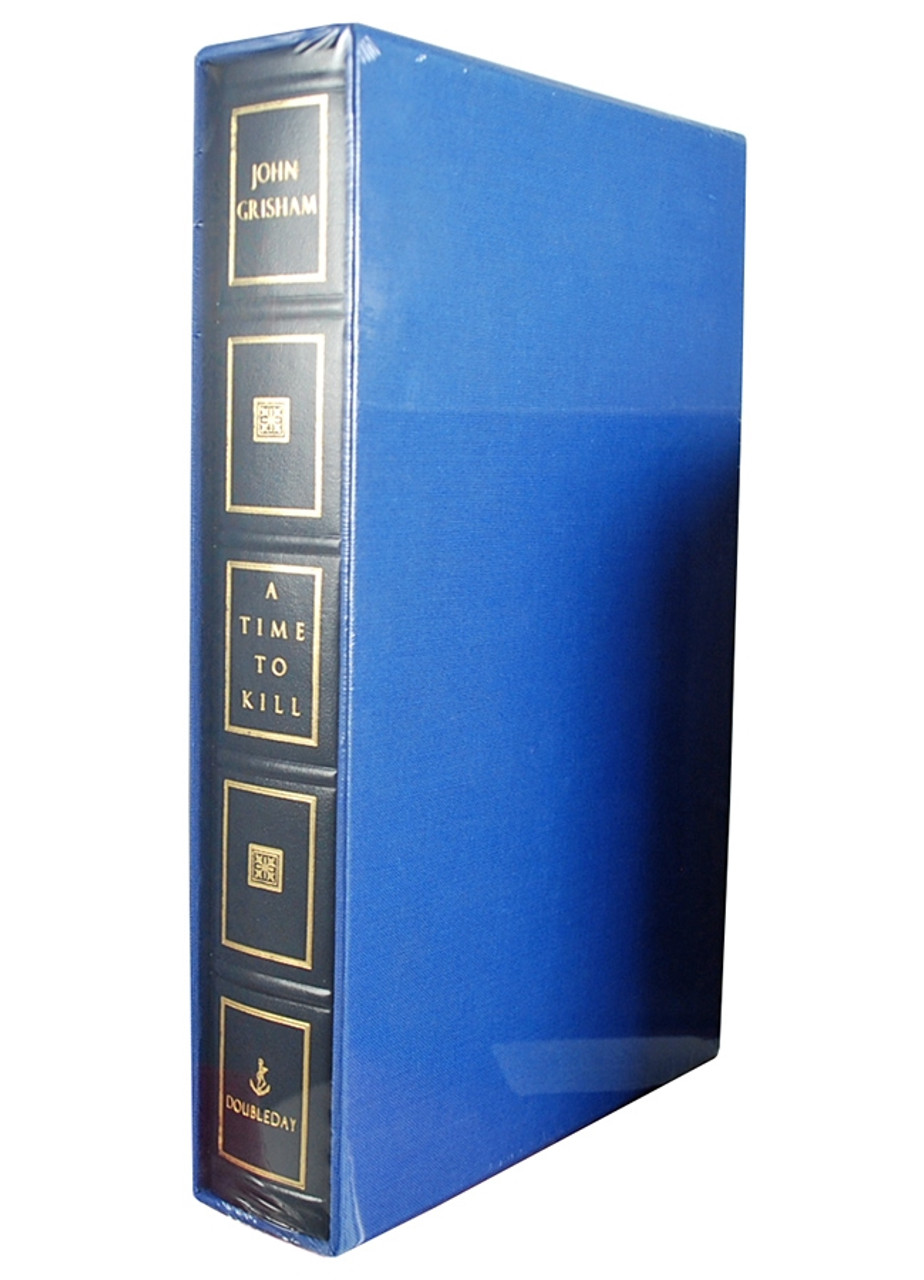 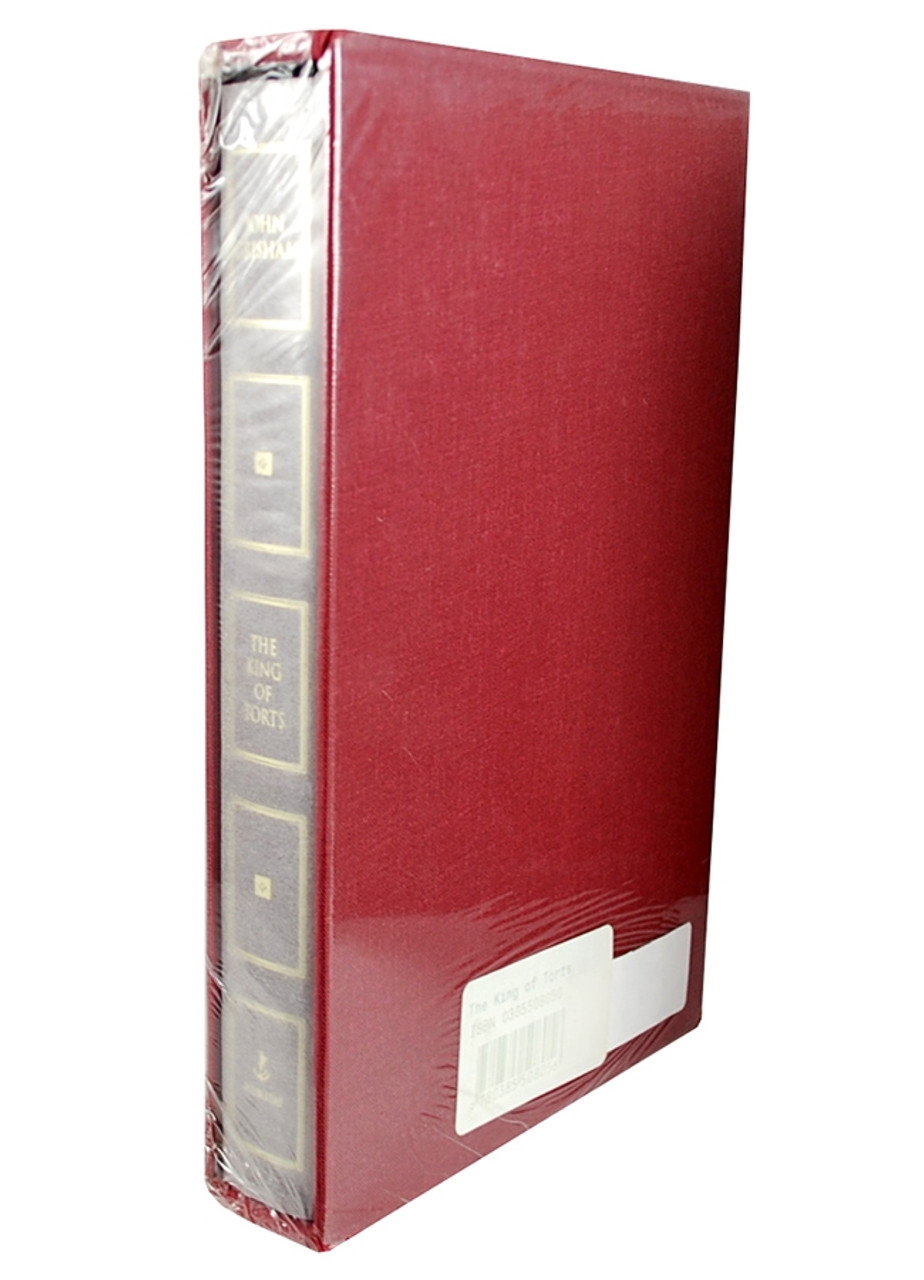 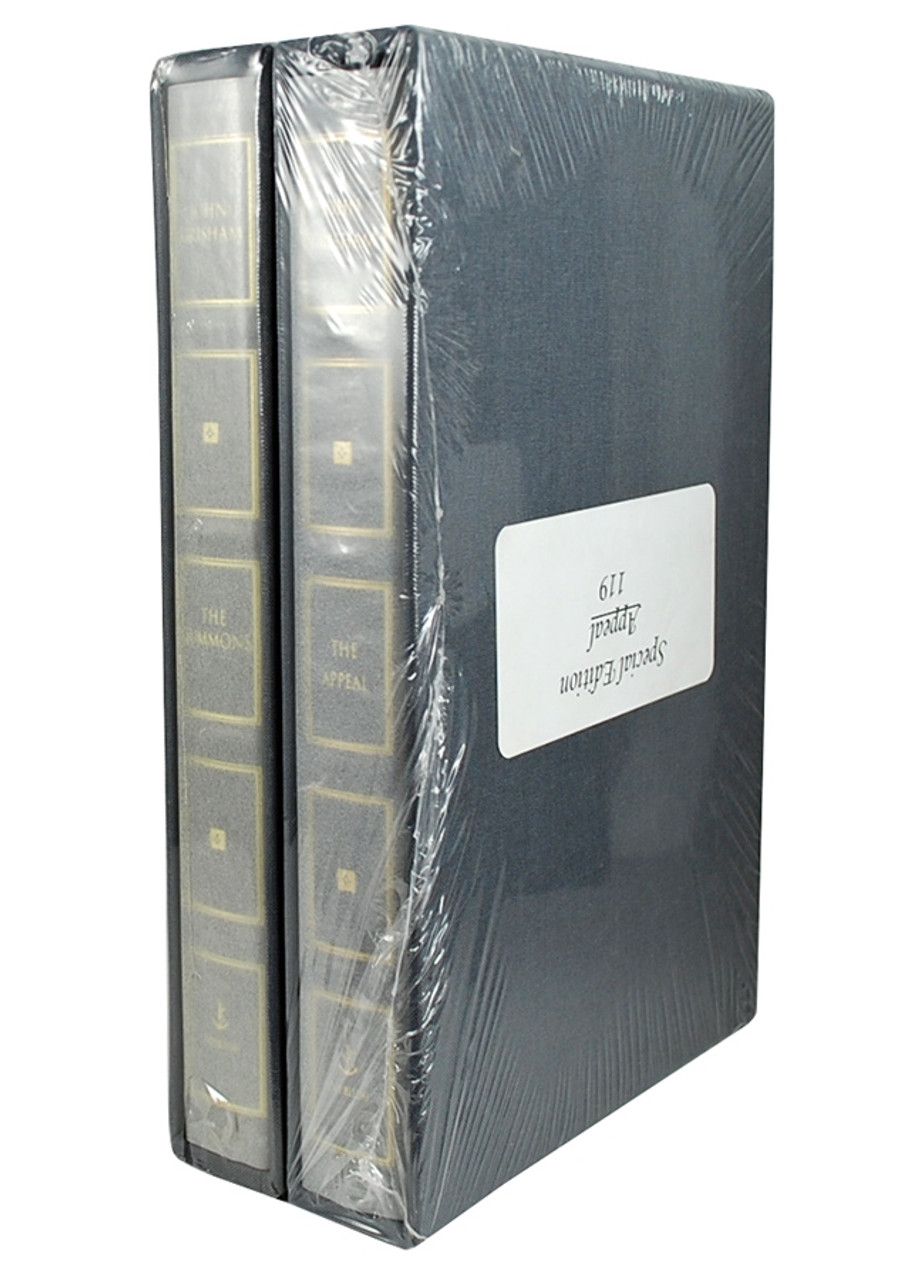 Garden City. Doubleday. Various years. The John Grisham Library in 31 volumes, with many still sealed in the original shrink-wrap. Each volume has been personally signed by John Grisham directly onto the limitation page. Each volume features decorated end papers, gold stamping, a ribbon marker and housed in a slipcase. Most of the volumes are luxuriously bound in full genuine leather. The nonlegal novels such as “Ford County” are issued by the publisher in cloth. Photos of actual collection. Very Fine without any discernible flaws in slipcase the same, unless otherwise noted.

John Grisham is an American novelist, attorney, politician, and activist, best known for his popular legal thrillers. His books have been translated into 42 languages and published worldwide.

This listing includes the following 31 volumes:

Several photos may be for display and presentation only. 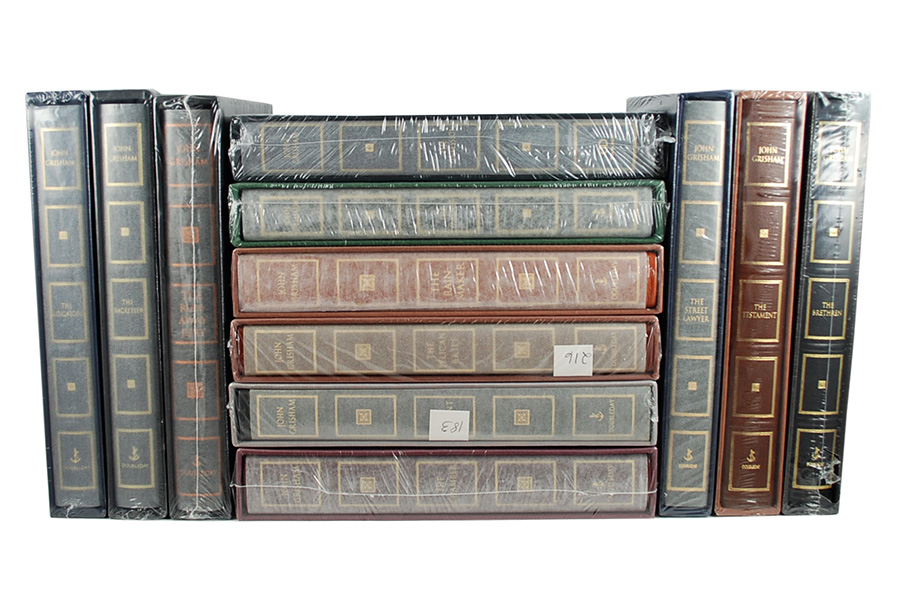 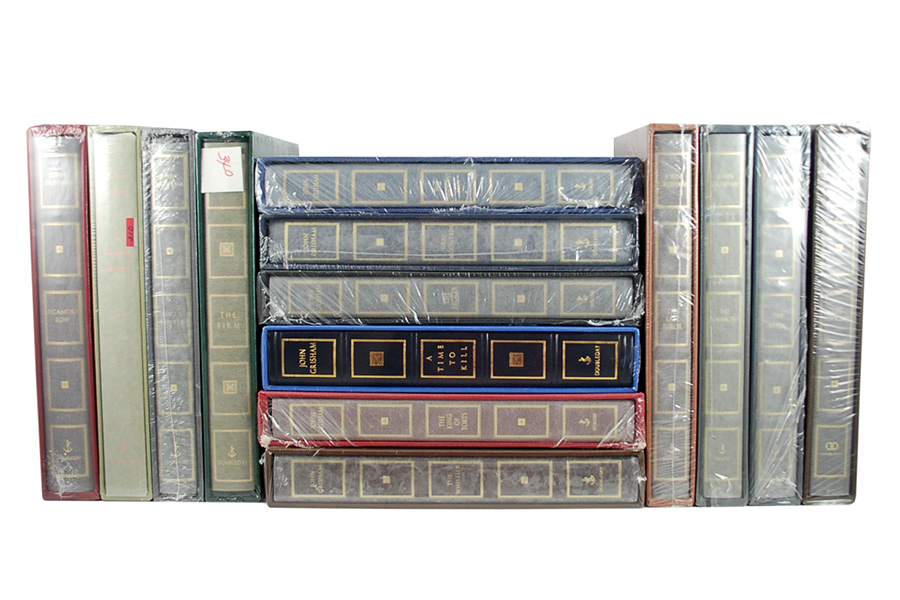 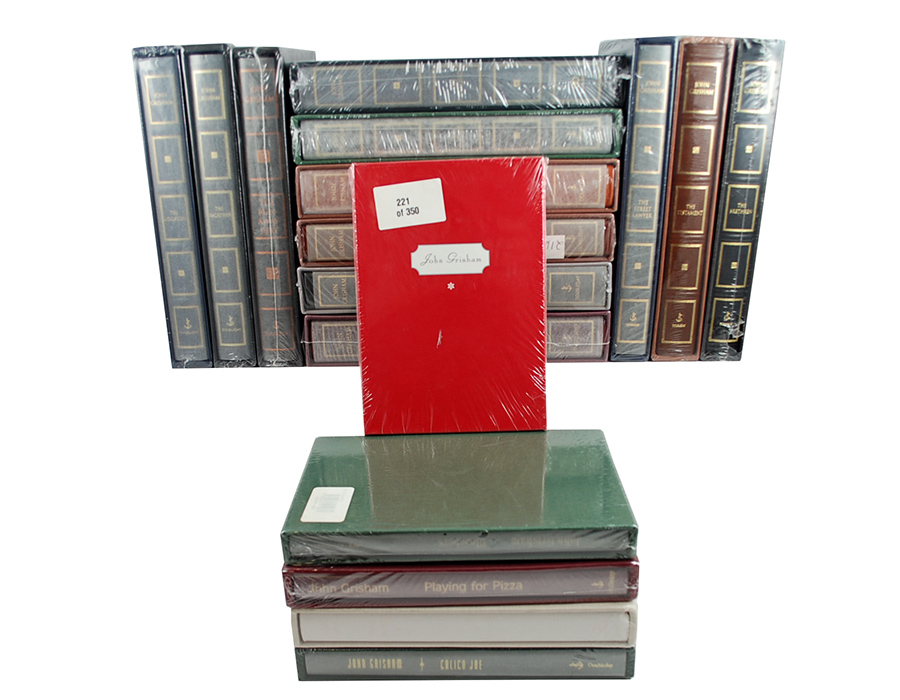 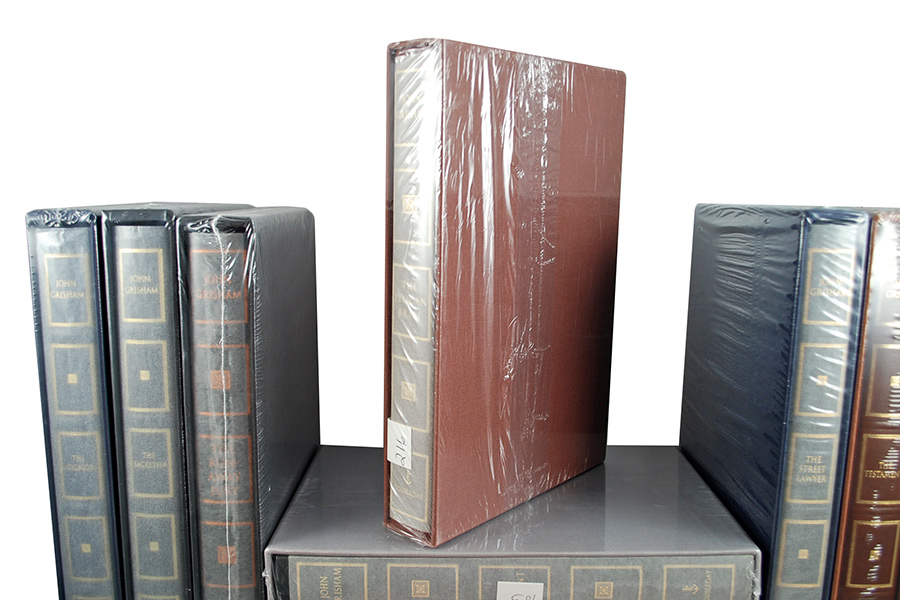 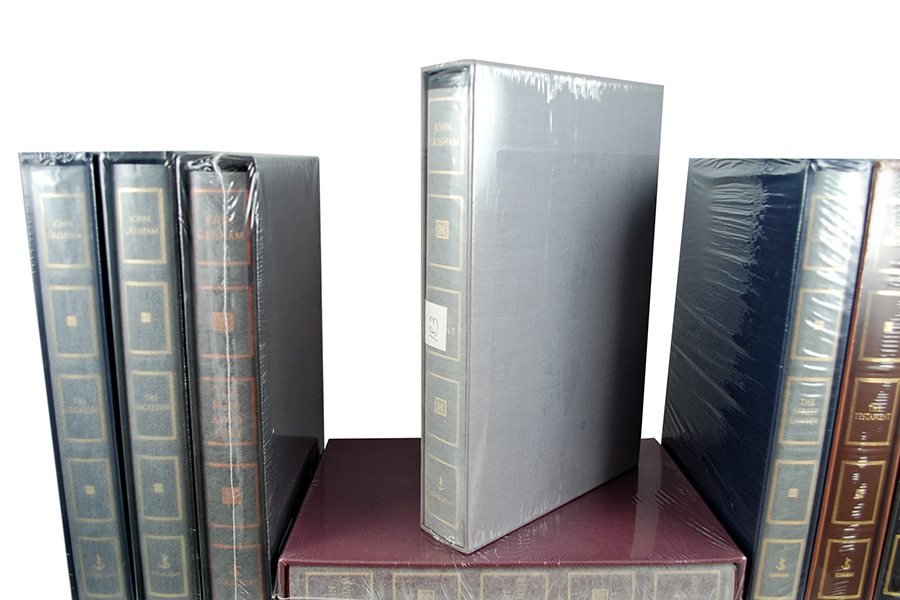 Long before his name became synonymous with the modern legal thriller, he was working 60-70 hours a week at a small Southaven, Mississippi, law practice, squeezing in time before going to the office and during courtroom recesses to work on his hobby—writing his first novel.

Born on February 8, 1955 in Jonesboro, Arkansas, to a construction worker and a homemaker, John Grisham as a child dreamed of being a professional baseball player. Realizing he didn’t have the right stuff for a pro career, he shifted gears and majored in accounting at Mississippi State University. After graduating from law school at Ole Miss in 1981, he went on to practice law for nearly a decade in Southaven, specializing in criminal defense and personal injury litigation. In 1983, he was elected to the state House of Representatives and served until 1990.

One day at the DeSoto County courthouse, Grisham overheard the harrowing testimony of a twelve-year-old rape victim and was inspired to start a novel exploring what would have happened if the girl’s father had murdered her assailants. Getting up at 5 a.m. every day to get in several hours of writing time before heading off to work, Grisham spent three years on A Time to Kill and finished it in 1987. Initially rejected by many publishers, it was eventually bought by Wynwood Press, who gave it a modest 5,000 copy printing and published it in June 1988.

That might have put an end to Grisham’s hobby. However, he had already begun his next book, and it would quickly turn that hobby into a new full-time career—and spark one of publishing’s greatest success stories. The day after Grisham completed A Time to Kill, he began work on another novel, the story of a hotshot young attorney lured to an apparently perfect law firm that was not what it appeared. When he sold the film rights to The Firm to Paramount Pictures for $600,000, Grisham suddenly became a hot property among publishers, and book rights were bought by Doubleday. Spending 47 weeks on The New York Times bestseller list, The Firm became the bestselling novel of 1991.

The successes of The Pelican Brief, which hit number one on the New York Times bestseller list, and The Client, which debuted at number one, confirmed Grisham’s reputation as the master of the legal thriller. Grisham’s success even renewed interest in A Time to Kill, which was republished in hardcover by Doubleday and then in paperback by Dell. This time around, it was a bestseller.

Since first publishing A Time to Kill in 1988, Grisham has written one novel a year (his other books are The Firm, The Pelican Brief, The Client, The Chamber, The Rainmaker, The Runaway Jury, The Partner, The Street Lawyer, The Testament, The Brethren, A Painted House, Skipping Christmas, The Summons, The King of Torts, Bleachers, The Last Juror, The Broker, Playing for Pizza, The Appeal, The Associate, The Confession, The Litigators, Calico Joe, The Racketeer, Sycamore Row, and Gray Mountain) and all of them have become international bestsellers. There are currently over 300 million John Grisham books in print worldwide, which have been translated into 40 languages. Nine of his novels have been turned into films (The Firm, The Pelican Brief, The Client, A Time to Kill, The Rainmaker, The Chamber, A Painted House, The Runaway Jury, and Skipping Christmas), as was an original screenplay, The Gingerbread Man. The Innocent Man (October 2006) marked his first foray into non-fiction, and Ford County (November 2009) was his first short story collection.

Grisham took time off from writing for several months in 1996 to return, after a five-year hiatus, to the courtroom. He was honoring a commitment made before he had retired from the law to become a full-time writer: representing the family of a railroad brakeman killed when he was pinned between two cars. Preparing his case with the same passion and dedication as his books’ protagonists, Grisham successfully argued his clients’ case, earning them a jury award of $683,500—the biggest verdict of his career.

When he’s not writing, Grisham devotes time to charitable causes, including most recently his Rebuild The Coast Fund, which raised 8.8 million dollars for Gulf Coast relief in the wake of Hurricane Katrina. He also keeps up with his greatest passion: baseball. The man who dreamed of being a professional baseball player now serves as the local Little League commissioner. The six ballfields he built on his property have played host to over 350 kids on 26 Little League teams. 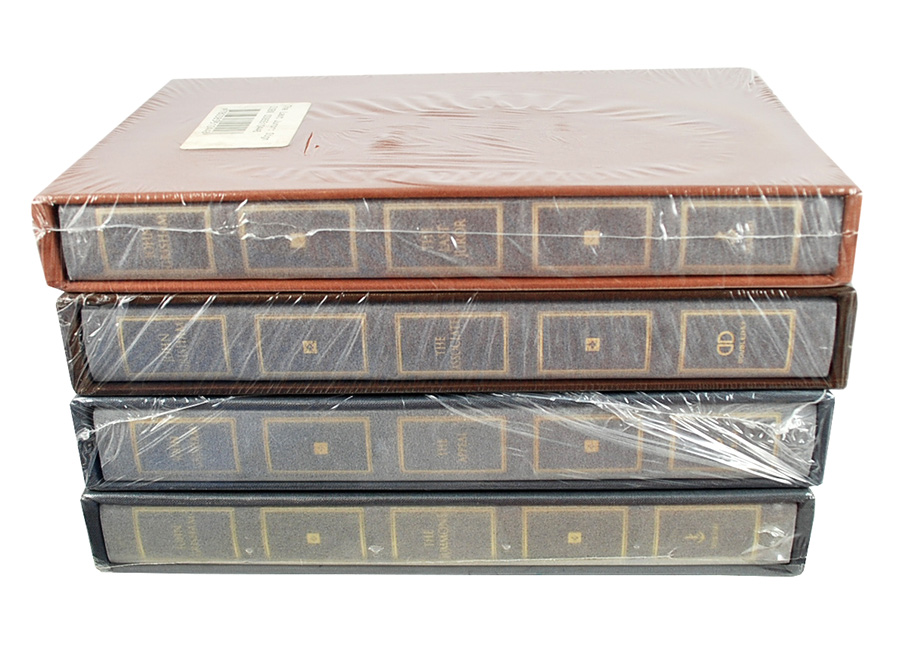 John Ray Grisham Jr. ( February 8, 1955) is an American novelist, attorney, politician, and activist, best known for his popular legal thrillers. His books have been translated into 42 languages and published worldwide.

Grisham graduated from Mississippi State University and received a J.D. degree from the University of Mississippi School of Law in 1981. He practiced criminal law for about a decade and served in the Mississippi House of Representatives from January 1984 to September 1990.

His first novel, A Time to Kill, was published in June 1989, four years after he began writing it. As of 2012, his books have sold over 275 million copies worldwide.

A Galaxy British Book Awards winner, Grisham is one of only three authors to sell two million copies on a first printing, the other two being Tom Clancy and J. K. Rowling.

Grisham's first bestseller, The Firm, sold more than seven million copies. The book was adapted into a 1993 feature film of the same name, starring Tom Cruise, and a 2012 TV series which continues the story ten years after the events of the film and novel.

Eight of his other novels have also been adapted into films: The Chamber, The Client, A Painted House, The Pelican Brief, The Rainmaker, The Runaway Jury, Skipping Christmas, and A Time to Kill.

Lifetime Guarantee of Signature Authenticity. Each volume has been personally signed by John Grisham directly onto the limitation page. The autographs are not facsimiles, stamps, or auto-pens. learn more

VERY FINE GUARANTEED except for one volume. Sealed unless otherwise noted. Each volume is a wonderful bright clean copy with sharp corners. Clean and straight boards without any markings, writings, or stampings. Each one is a well-cared for book, protected from any potential damage. The entire collection stands out as having had exemplary care. Square and tight spines. Unread books in the shrink-wrap. As New as if from the publisher.

Each volume has been personally signed by Tom Clancy A unique opportunity to acquire a collection of twelve signed limited edition volumes by Tom Clancy. Included in this set are the best-selling...