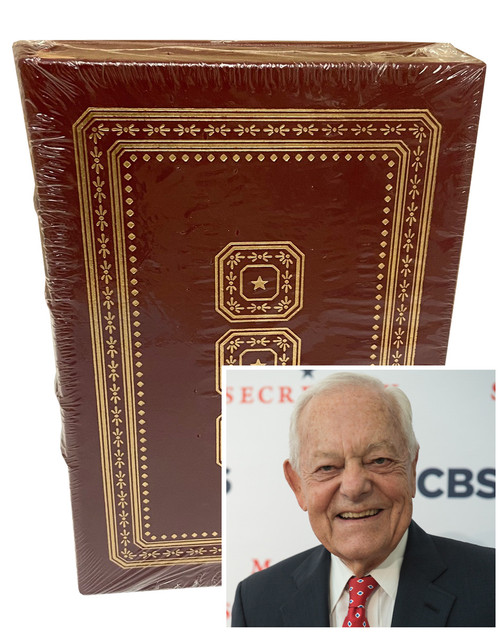 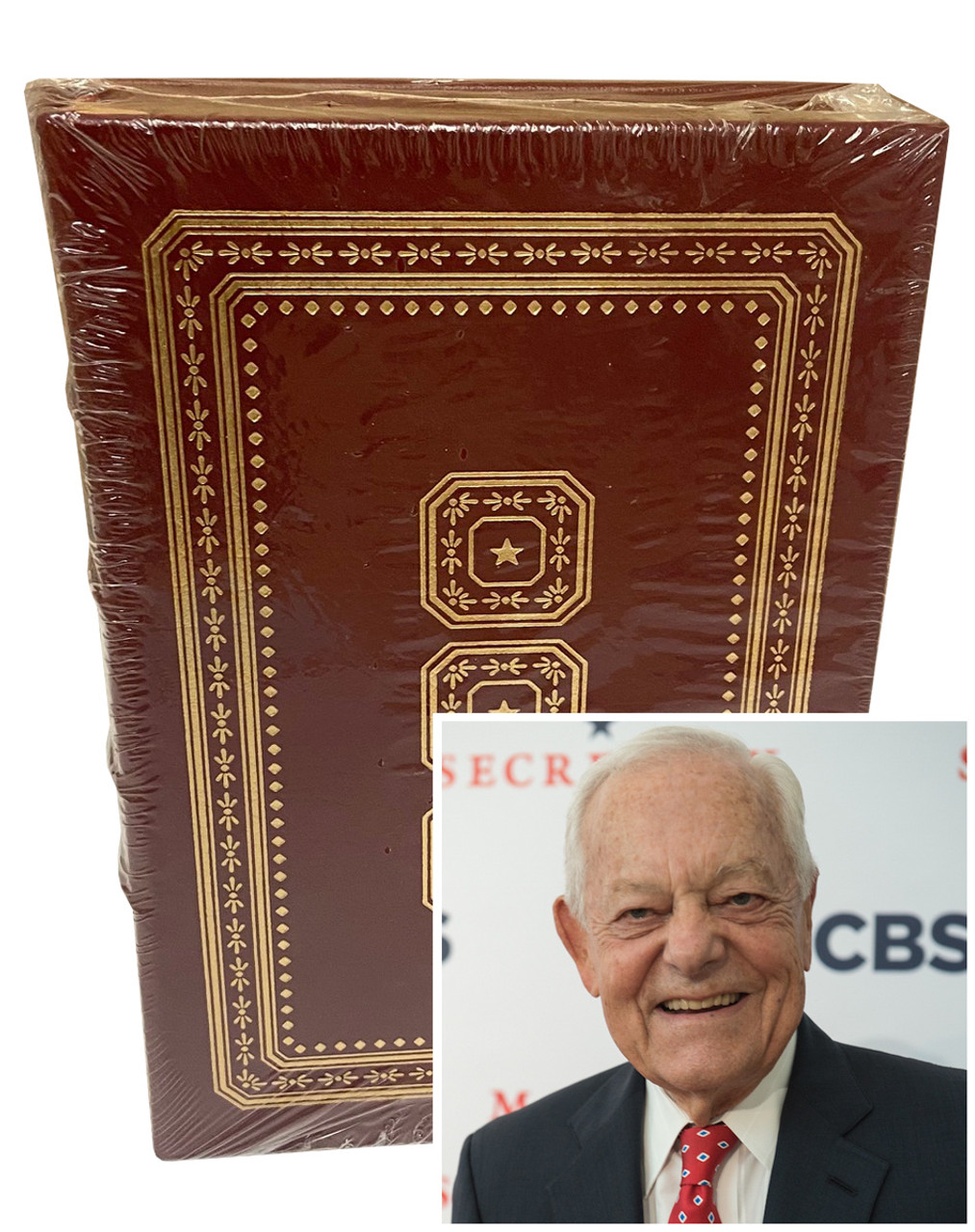 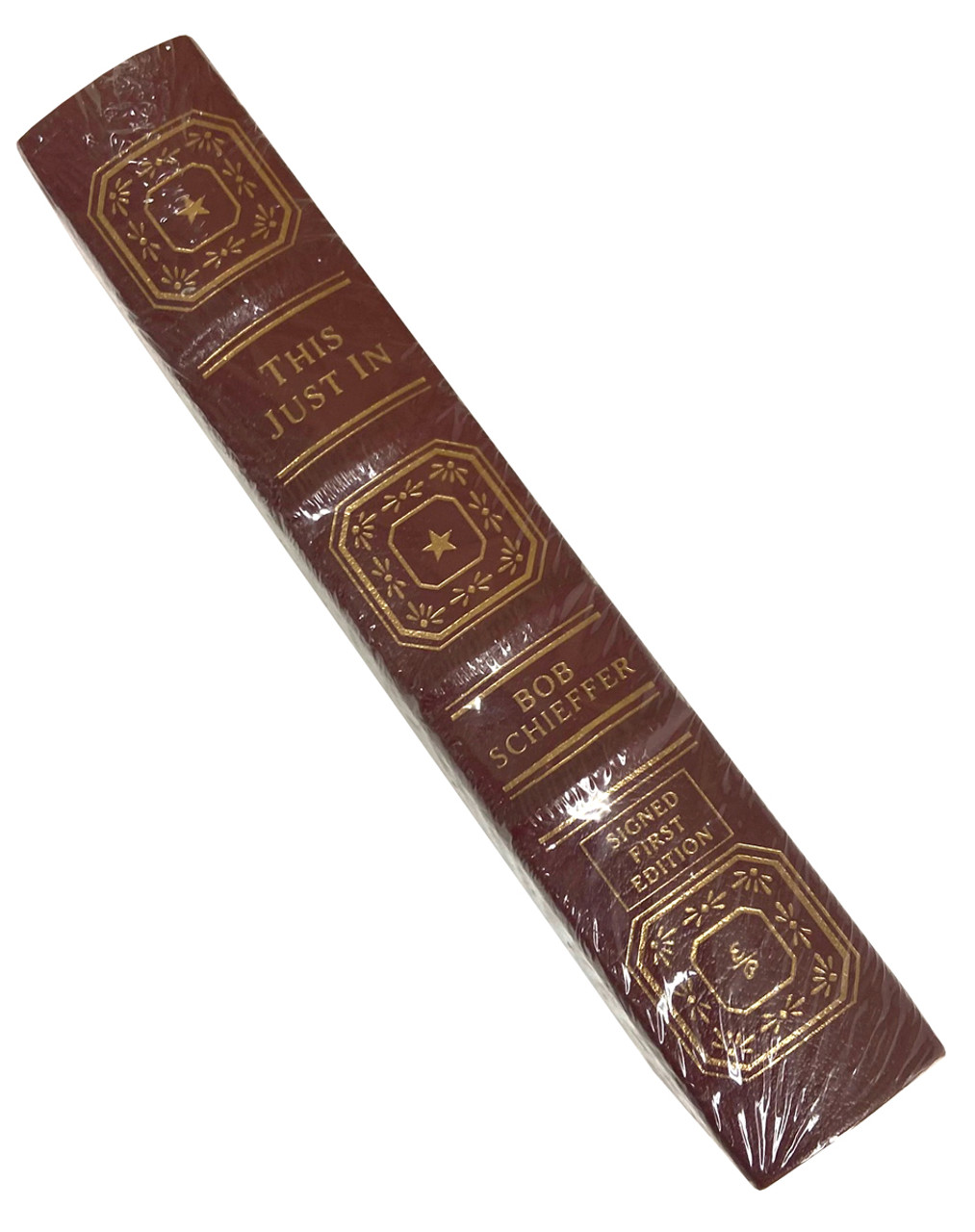 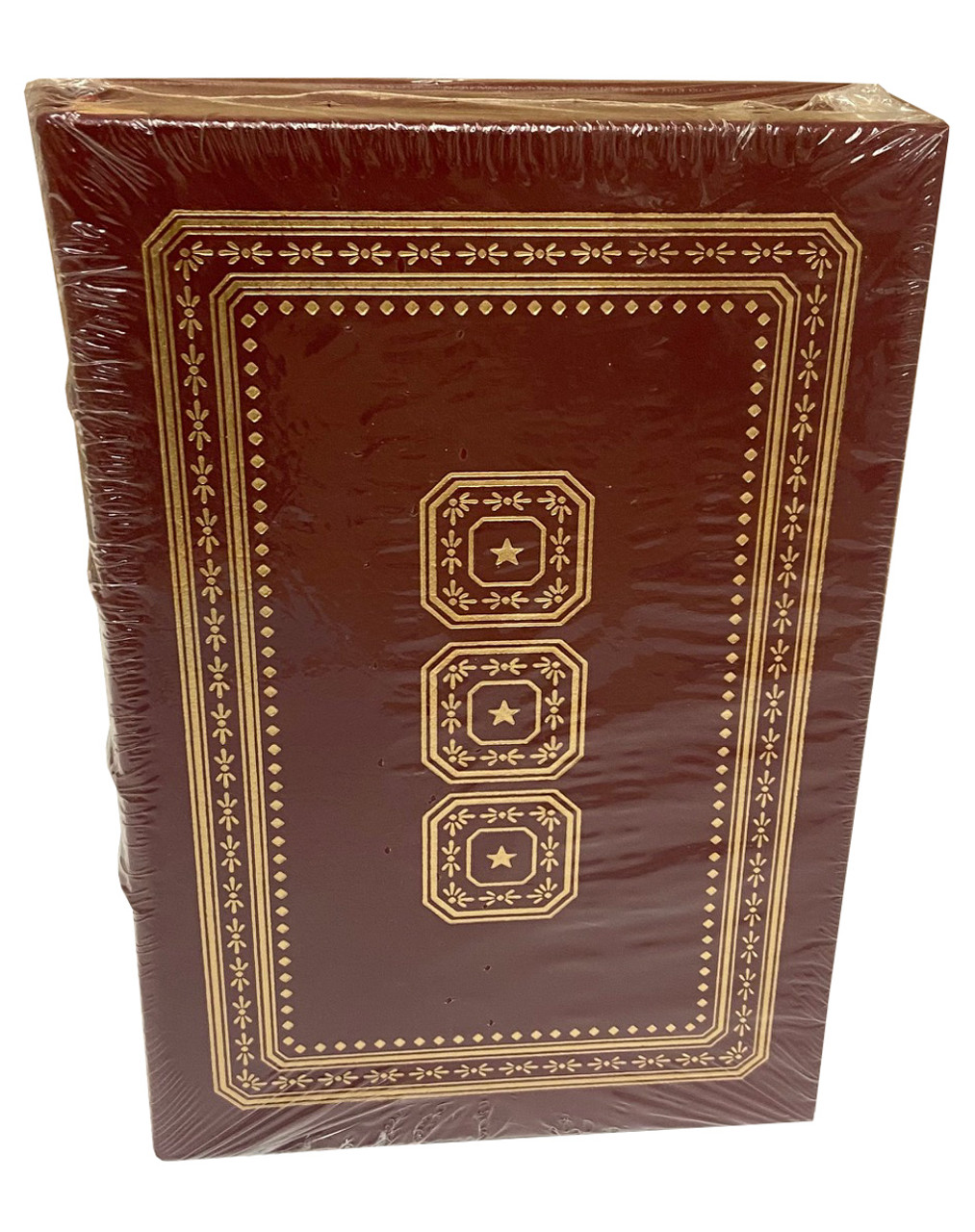 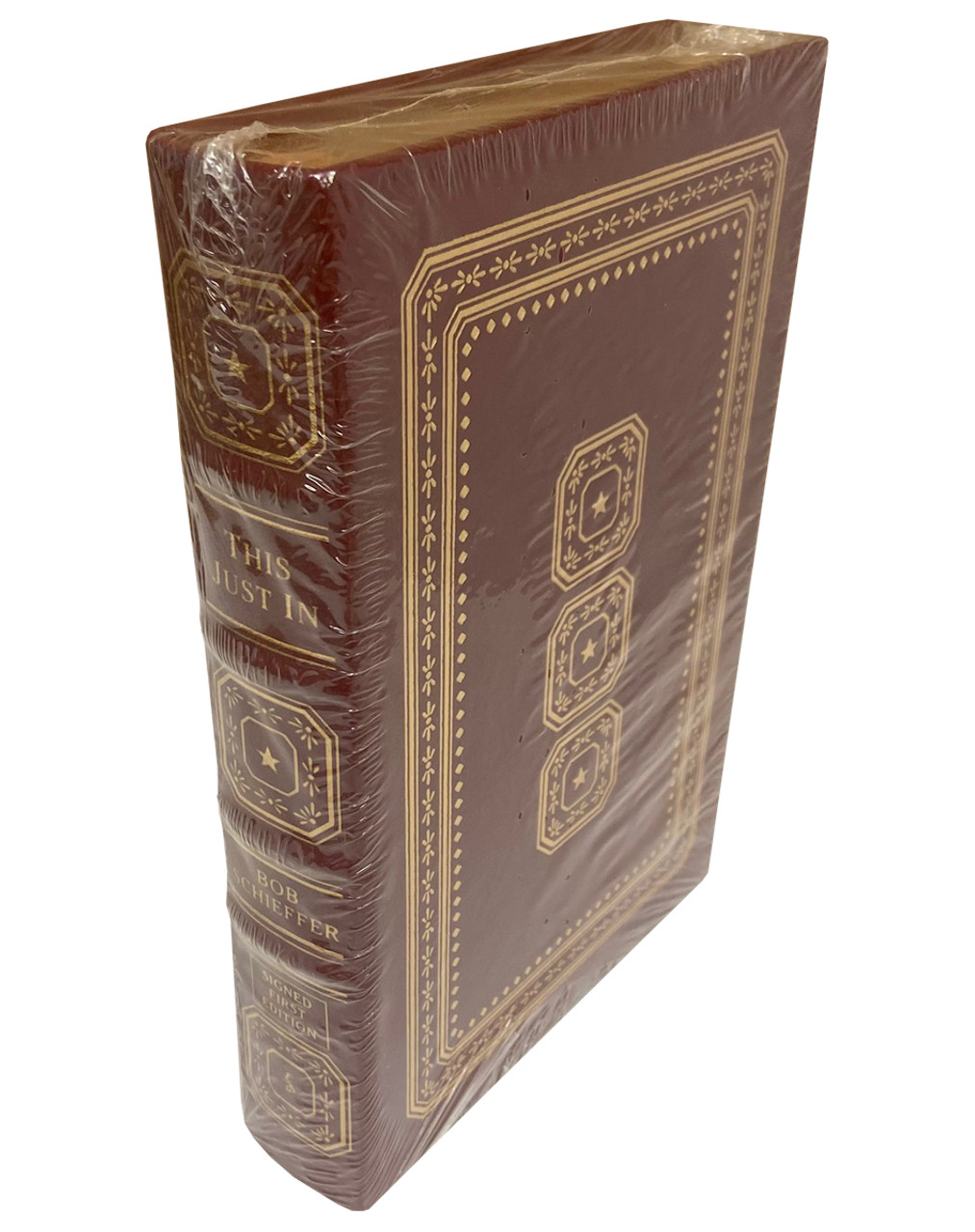 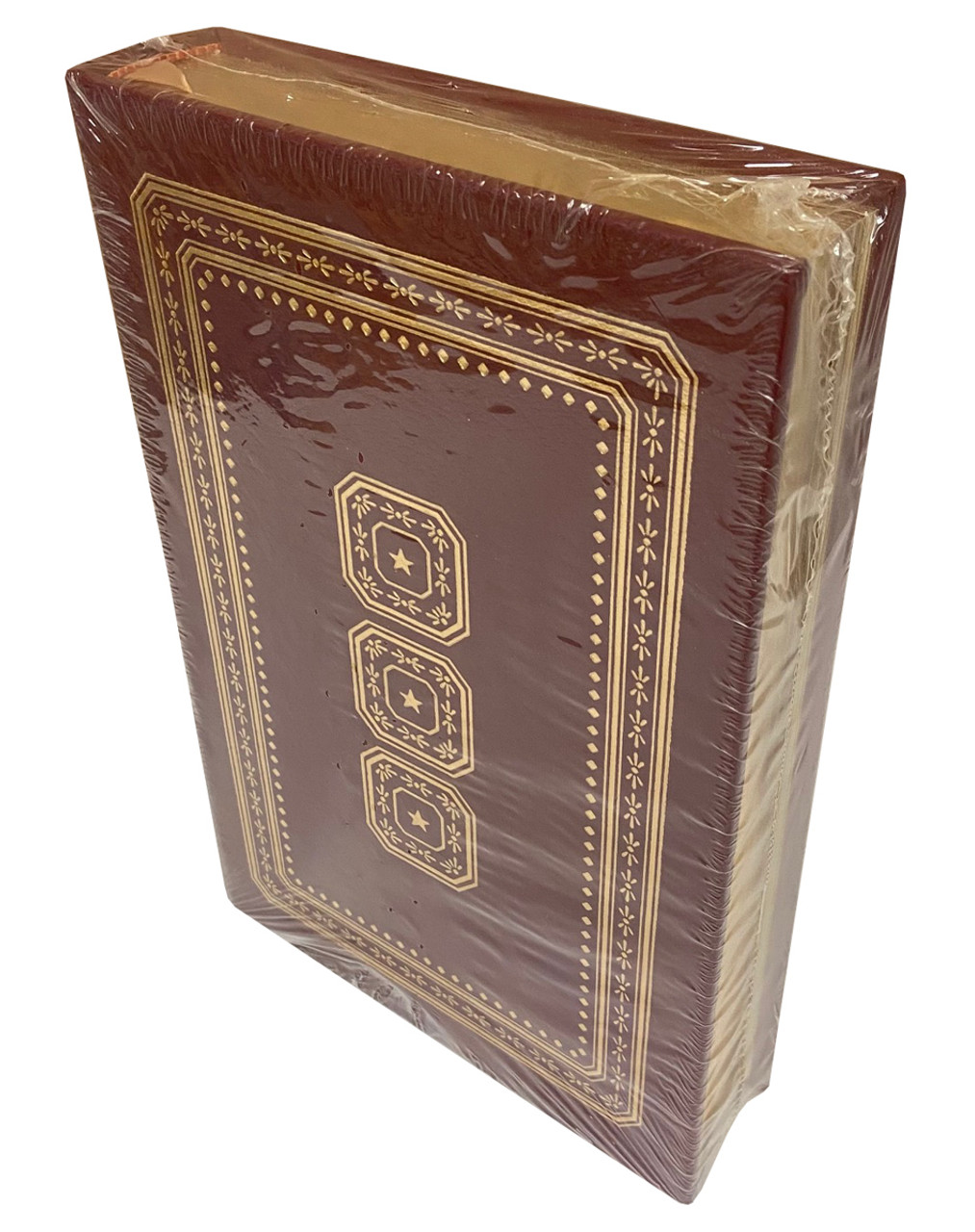 Personally signed by Bob Schieffer, the American television journalist who has been with CBS News since 1969.

Limited to only 1,650 signed and numbered copies. 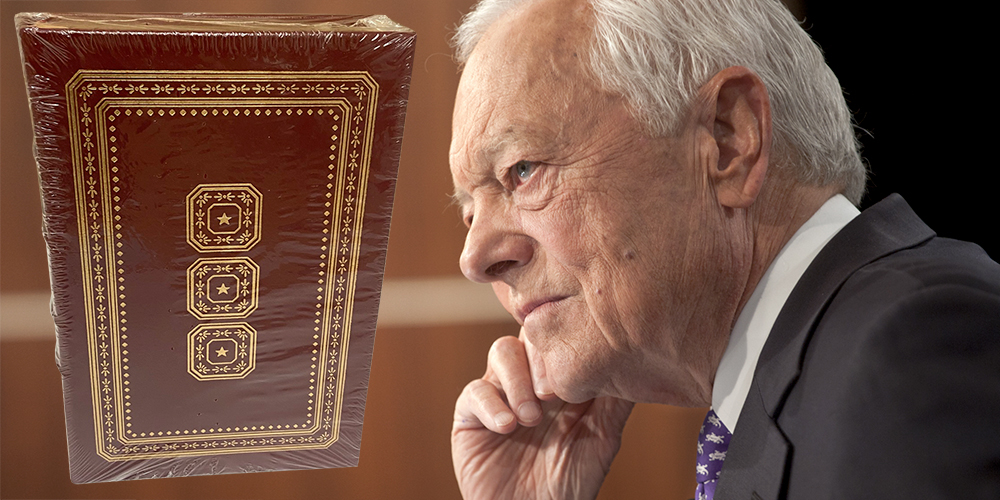 Easton Press, Norwalk, CT. 2003. Bob Lloyd Schieffer "This Just In" Signed First Edition. Signed by the author on the special titled and numbered page. Certified by the publisher to be authentic. A luxurious signed leather bound heirloom, accented with 22kt gold, manufactured to last generations. A high quality book that would make the perfect gift. Sealed without any flaws.

About "This Just In : What I Couldn't Tell You on TV"

In Bob Schieffer's own words, from the JFK assassination to the World Trade Center attacks, "I got to see most of it and came to know many of the major figures of those four decades because I am a reporter. I became a reporter because I always wanted to see things for myself and make my own judgments about them.

Those events I covered have become part of our history and you already know most of them. But I want to tell you about the parts that didn't get on television or in the paper, the serious parts and the not-so-serious parts, the good times I had, and the presidents, senators, correspondents, big-time crooks, and small-time swindlers I came to know. Here are the stories I tell my friends, and they are the stories I want to share with you."

Schieffer is not only broadcast journalism's most experienced Washington reporter, but one of its best natural writers. This Just In is filled with great behind-the-scenes tales and surprising scoops based on dozens of brand-new-and sometimes startling-interviews. Smart, witty, and insightful, these are the stories you'll want to share with your friends.

"...offers a fascinating, and often unflattering, look at the inside workings of broadcast news... "-- Austin American-Statesman, January 23, 2003

"These are the tales he tells his friends...witty, entertaining, and enlightening." -- USA TODAY (magazine), July 2003

"a panoramic work that summarizesone mans career [and] the technological and moral evolution of both media during the 20th century." -- Newark Star Ledger, February 18, 2003 -

Bob Lloyd Schieffer (born February 25, 1937) is an American television journalist who has been with CBS News since 1969, serving 23 years as anchor on the Saturday edition of CBS Evening News from 1973 to 1996; chief Washington correspondent since 1982, moderator of the Sunday public affairs show Face the Nation since 1991, and, between March 2005 and August 31, 2006, interim weekday anchor of the CBS Evening News.

Schieffer is one of the few journalists to have covered all four of the major Washington national assignments: the White House, the Pentagon, United States Department of State, and United States Congress. His career with CBS has almost exclusively dealt with national politics.

Schieffer is a survivor of grade III bladder cancer; he was diagnosed in 2003 and is currently cancer-free.