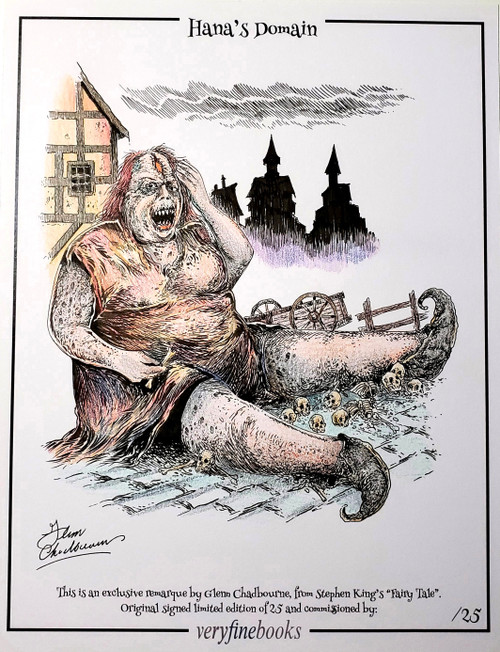 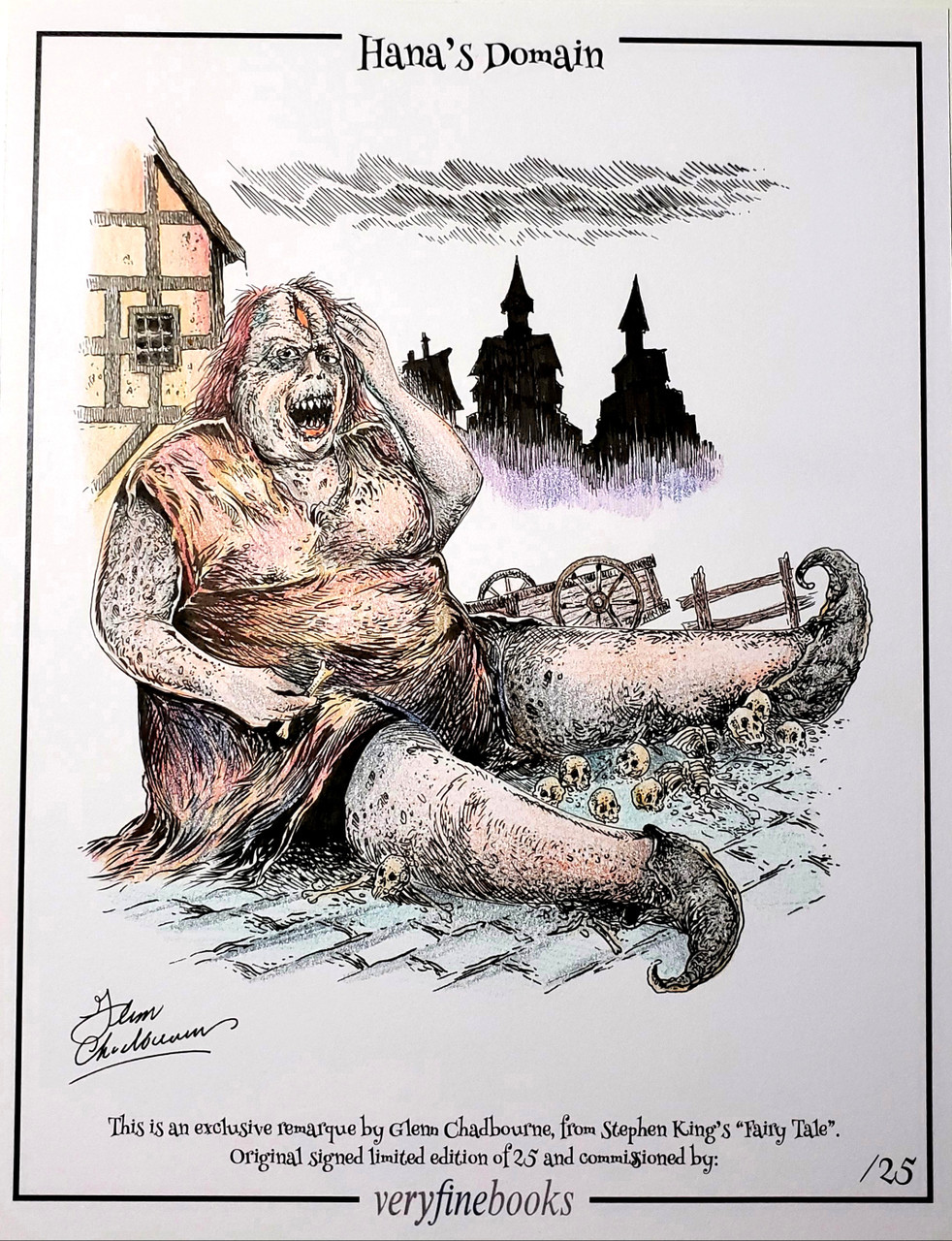 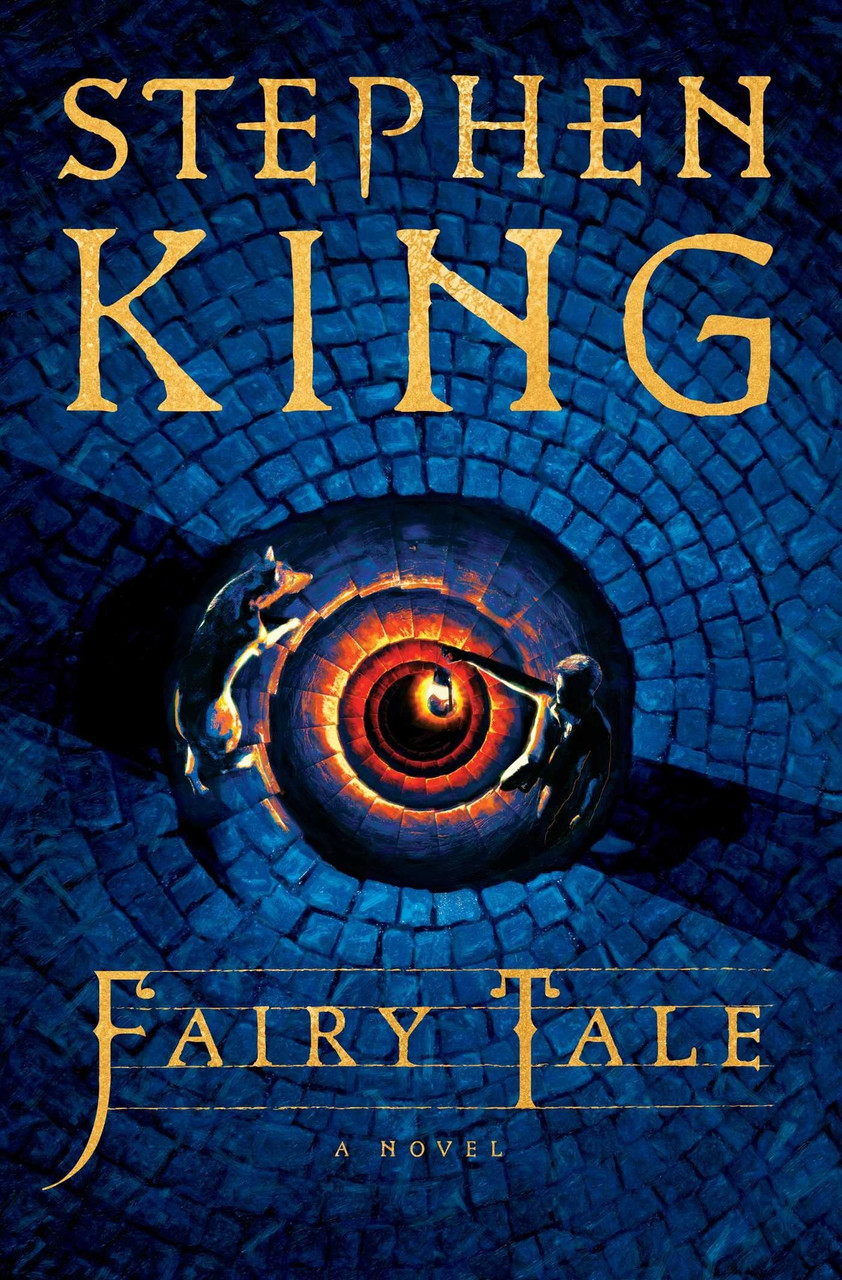 Personally drawn, signed and numbered by the artist, Glenn Chadbourne 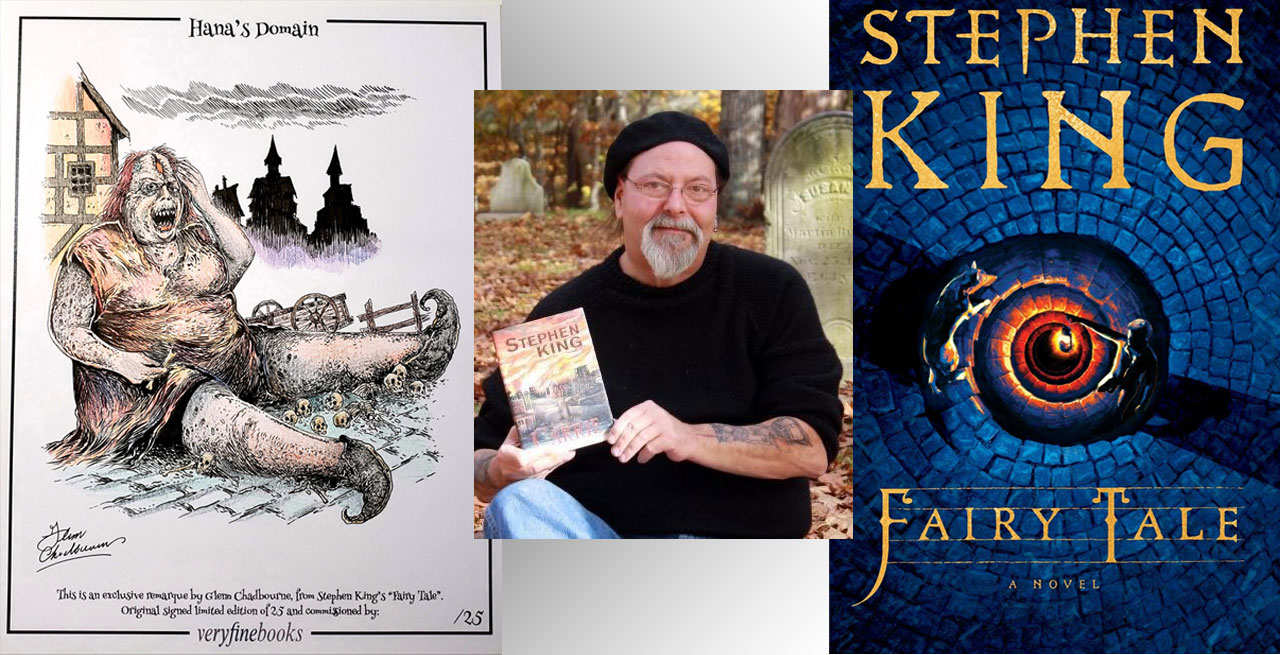 Glenn Chadbourne 2022. "Hana's Domain". An original artistic stand-alone print, personally signed and numbered by the artist Glenn Chadbourne. Limited to only 25 original pieces of artwork, each one being a variation. No two will be identical. This is NOT a reproduction print. The art print measures 8.5" x 11".

Glenn Chadbourne has reached into the deepest well of his artistic talent to conjure up this extraordinary horror art of the giant "Hana" (in all her hideous glory) from Stephen King's new novel "Fairy Tale".

The following 3 prints (#16, #22, #25) are still available. Please choose the number you would prefer to receive in the ORDER COMMENTS. 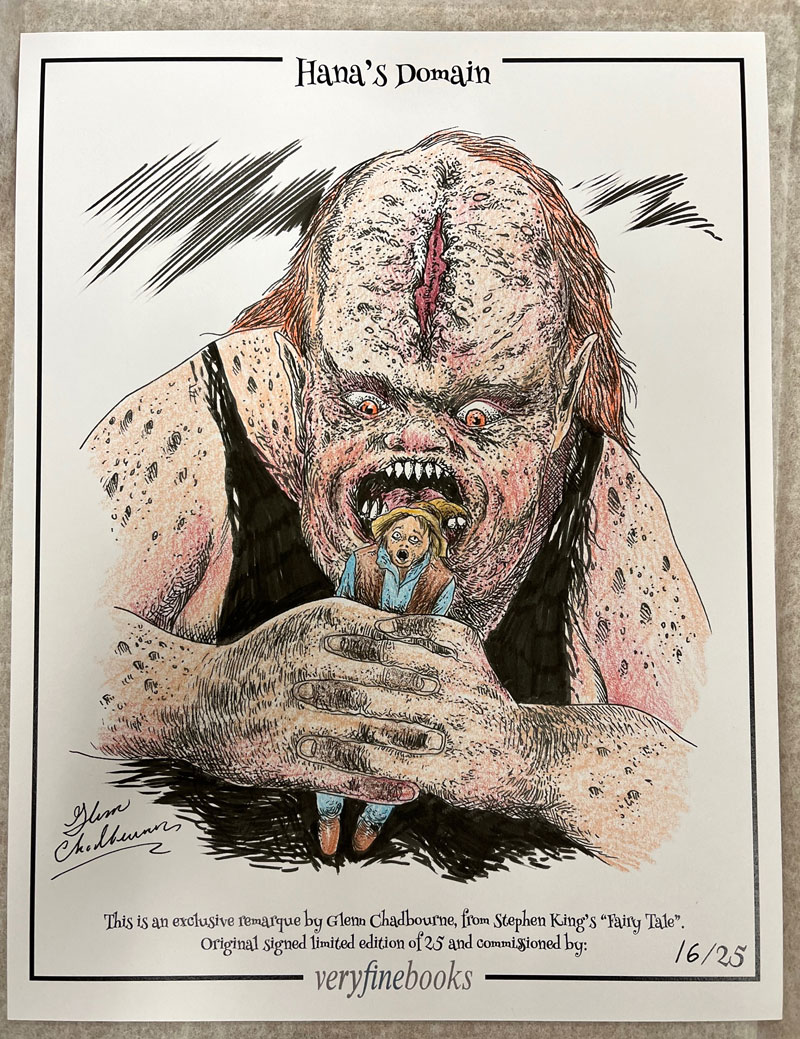 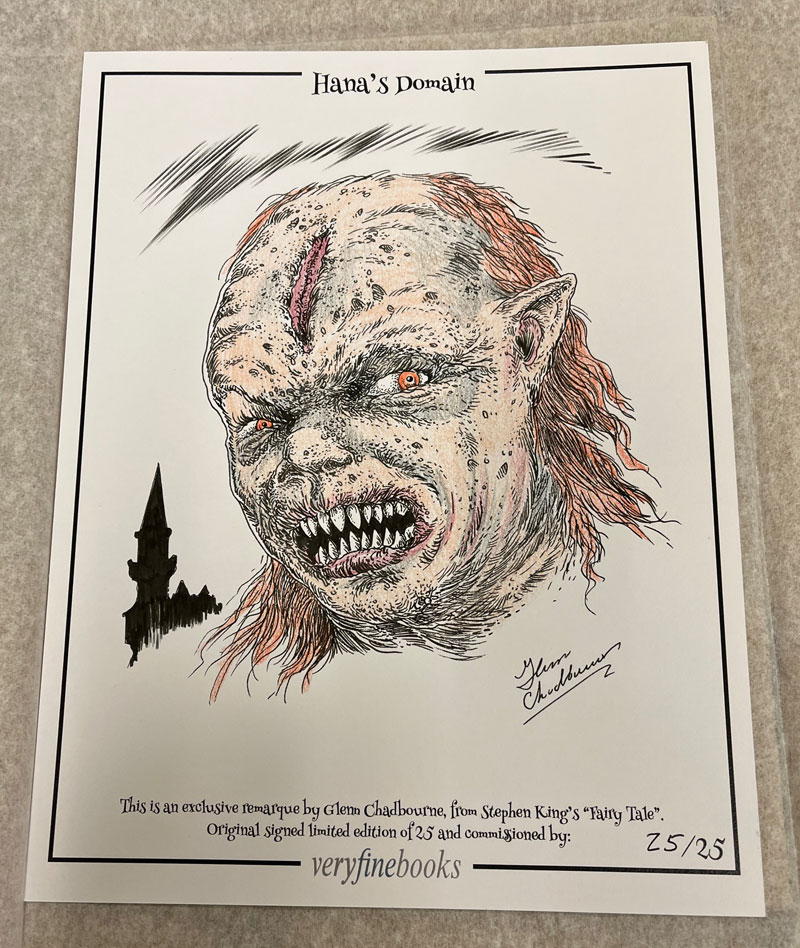 The artwork adds a special value because it is a one-of-a-kind original. This detailed finished full-color drawing ties in with the subject matter of the novel and is personally and individually drawn for you by Glenn Chadbourne. This highly collectible piece of artwork depicts the giant Hana from Stephen King's novel "Fairy Tale". A unique opportunity to own an original piece of work by the artist that will be a great image to display in your home or office. Ready for framing.

LIFETIME GUARANTEE OF SIGNATURE AUTHENTICITY. "Hana's Domain", the signed limited edition remarque print from Stephen King's novel "Fairy Tale", has been personally created, signed and numbered by the artist, Glenn Chadbourne. This is an original drawing and not a reproduction which was then signed. Each print will include a hand-numbered COA (Certificate of Authenticity) to the match the number of the print. The autograph is not a facsimile, stamp, or auto-pen.

Legendary storyteller Stephen King goes into the deepest well of his imagination in this spellbinding novel about a seventeen-year-old boy who inherits the keys to a parallel world where good and evil are at war, and the stakes could not be higher—for that world or ours.

Charlie Reade looks like a regular high school kid, great at baseball and football, a decent student. But he carries a heavy load. His mom was killed in a hit-and-run accident when he was seven, and grief drove his dad to drink. Charlie learned how to take care of himself—and his dad. When Charlie is seventeen, he meets a dog named Radar and her aging master, Howard Bowditch, a recluse in a big house at the top of a big hill, with a locked shed in the backyard. Sometimes strange sounds emerge from it.

Charlie starts doing jobs for Mr. Bowditch and loses his heart to Radar. Then, when Bowditch dies, he leaves Charlie a cassette tape telling a story no one would believe. What Bowditch knows, and has kept secret all his long life, is that inside the shed is a portal to another world.

King’s storytelling in Fairy Tale soars. This is a magnificent and terrifying tale in which good is pitted against overwhelming evil, and a heroic boy—and his dog—must lead the battle.

Early in the Pandemic, King asked himself: “What could you write that would make you happy?”

“As if my imagination had been waiting for the question to be asked, I saw a vast deserted city—deserted but alive. I saw the empty streets, the haunted buildings, a gargoyle head lying overturned in the street. I saw smashed statues (of what I didn’t know, but I eventually found out). I saw a huge, sprawling palace with glass towers so high their tips pierced the clouds. Those images released the story I wanted to tell.” 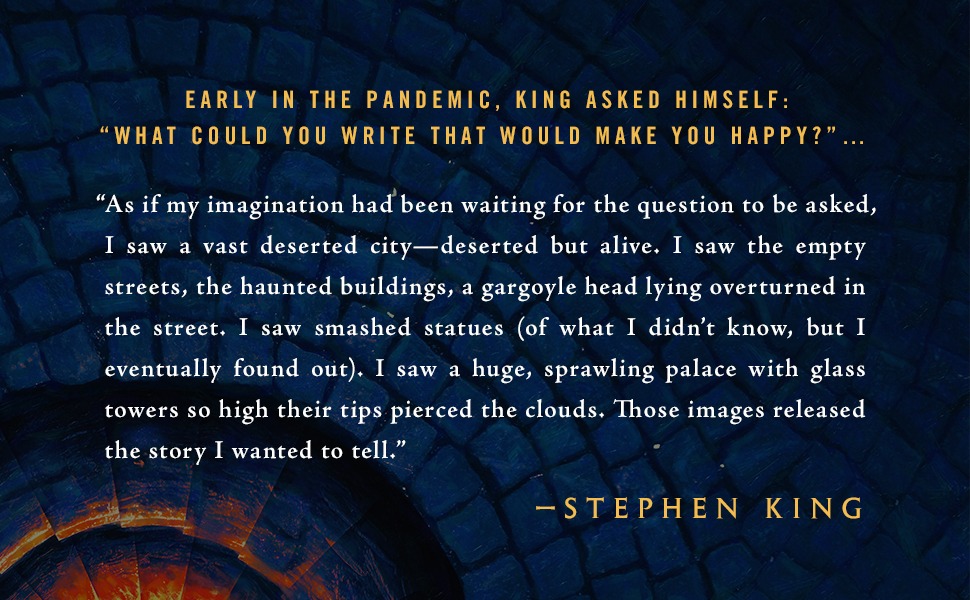 Stephen King is the author of more than sixty books, all of them worldwide bestsellers. His recent work includes Fairy Tale, Billy Summers, If It Bleeds, The Institute, Elevation, The Outsider, Sleeping Beauties (cowritten with his son Owen King), and the Bill Hodges trilogy: End of Watch, Finders Keepers, and Mr. Mercedes (an Edgar Award winner for Best Novel and a television series streaming on Peacock). His novel 11/22/63 was named a top ten book of 2011 by The New York Times Book Review and won the Los Angeles Times Book Prize for Mystery/Thriller. His epic works The Dark Tower, It, Pet Sematary, Doctor Sleep, and Firestarter are the basis for major motion pictures, with It now the highest-grossing horror film of all time. He is the recipient of the 2020 Audio Publishers Association Lifetime Achievement Award, the 2018 PEN America Literary Service Award, the 2014 National Medal of Arts, and the 2003 National Book Foundation Medal for Distinguished Contribution to American Letters. He lives in Bangor, Maine, with his wife, novelist Tabitha King. 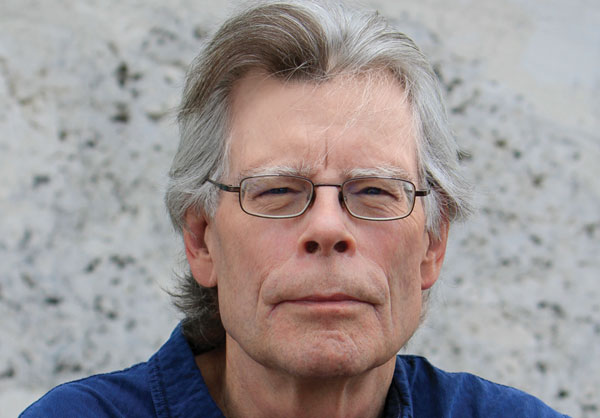 VERY FINE GUARANTEED. Each print is in Very Fine condition without any discernible flaws. A wonderful bright clean copy free of any markings, writings, or stamps.