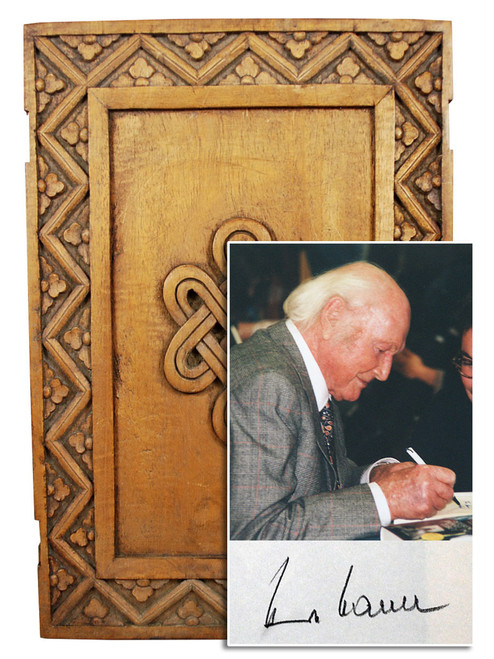 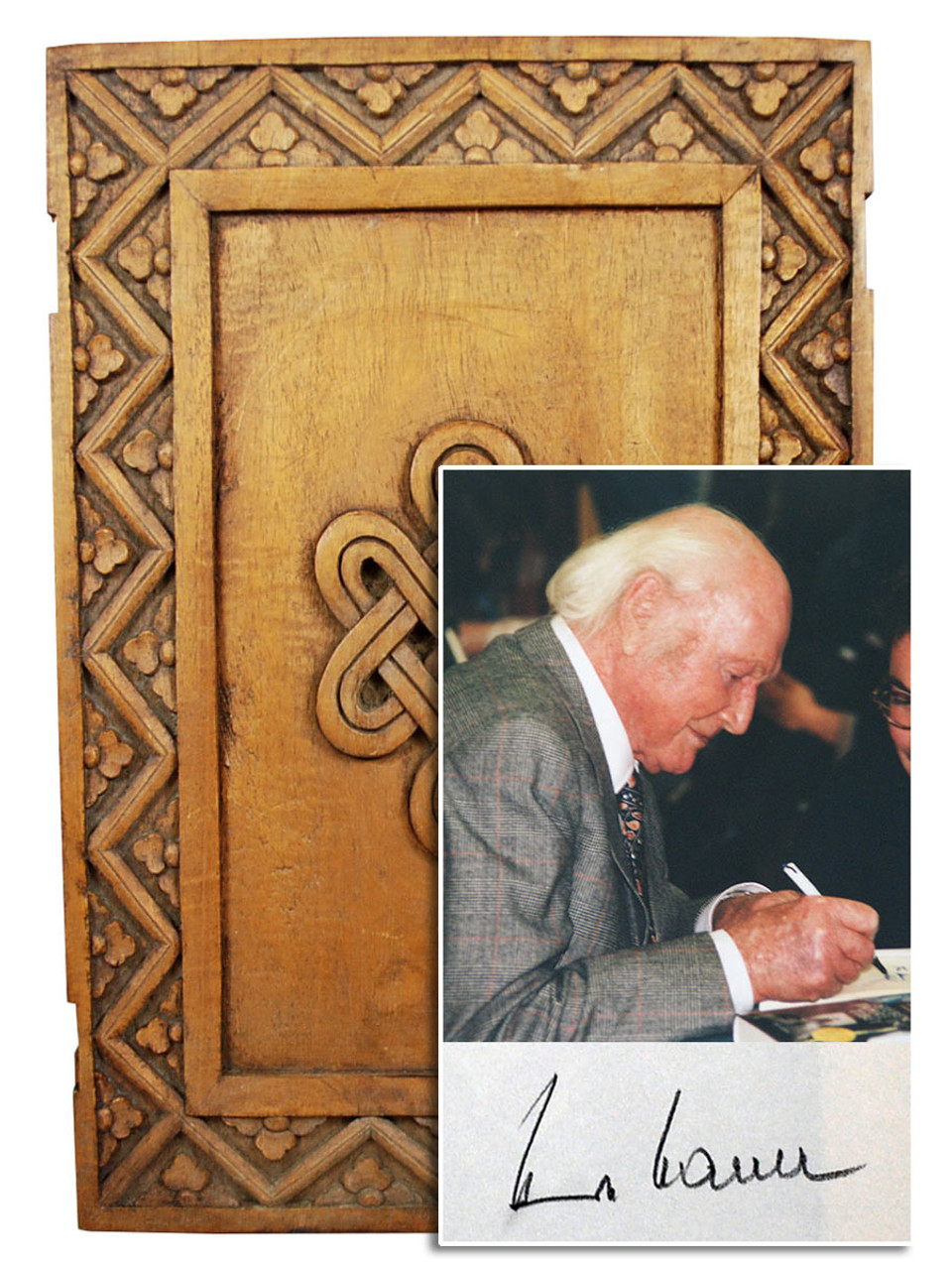 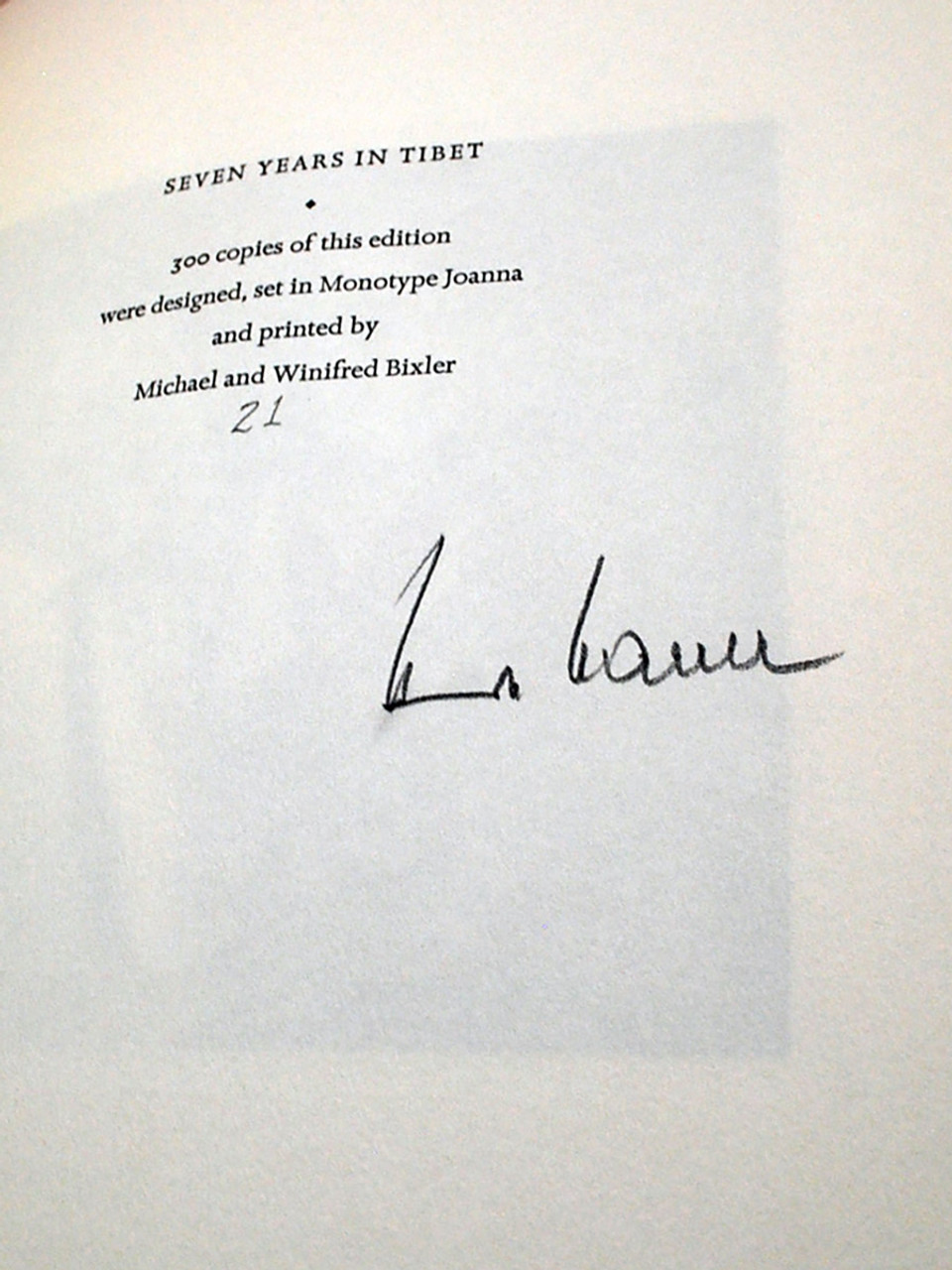 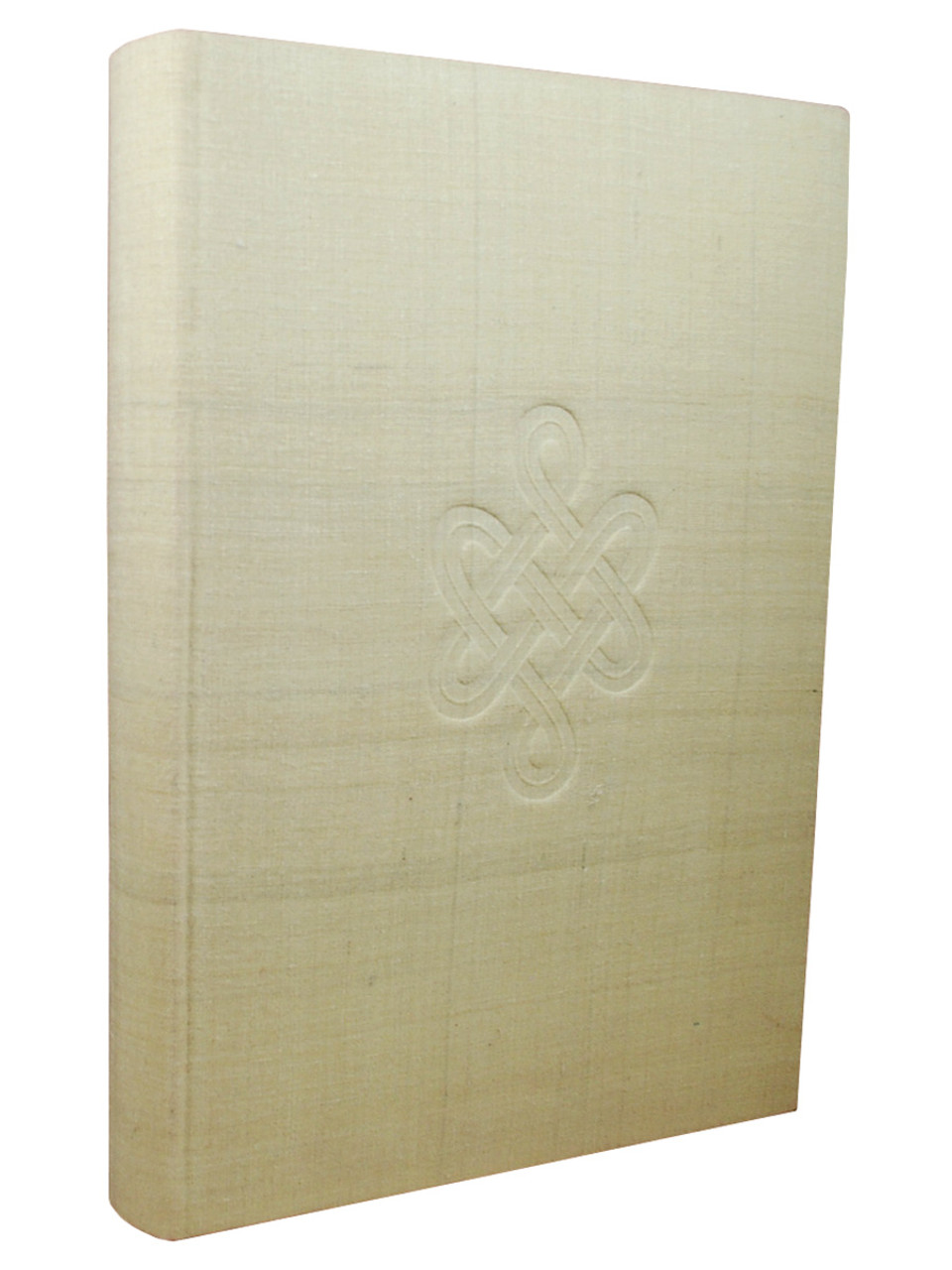 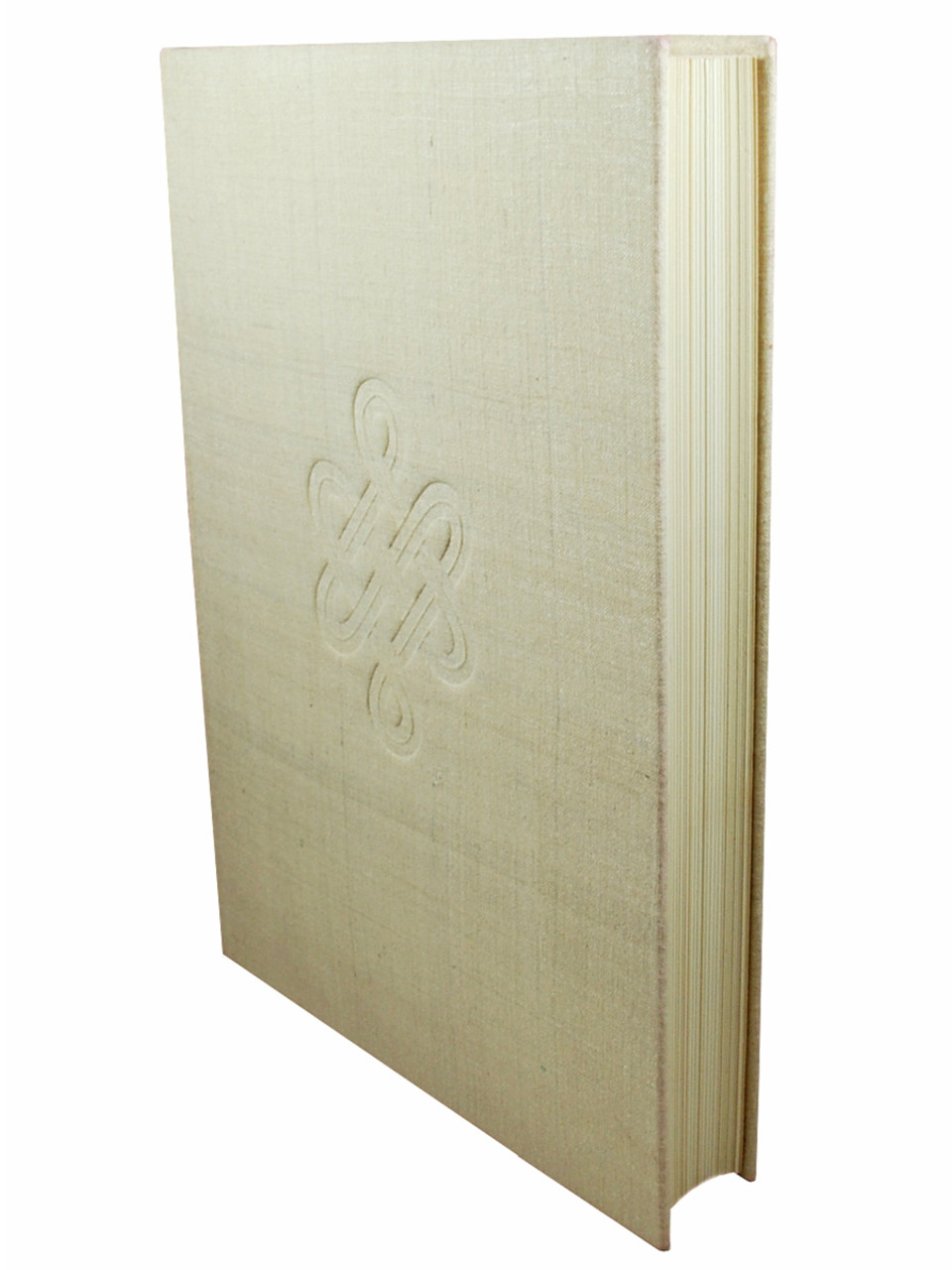 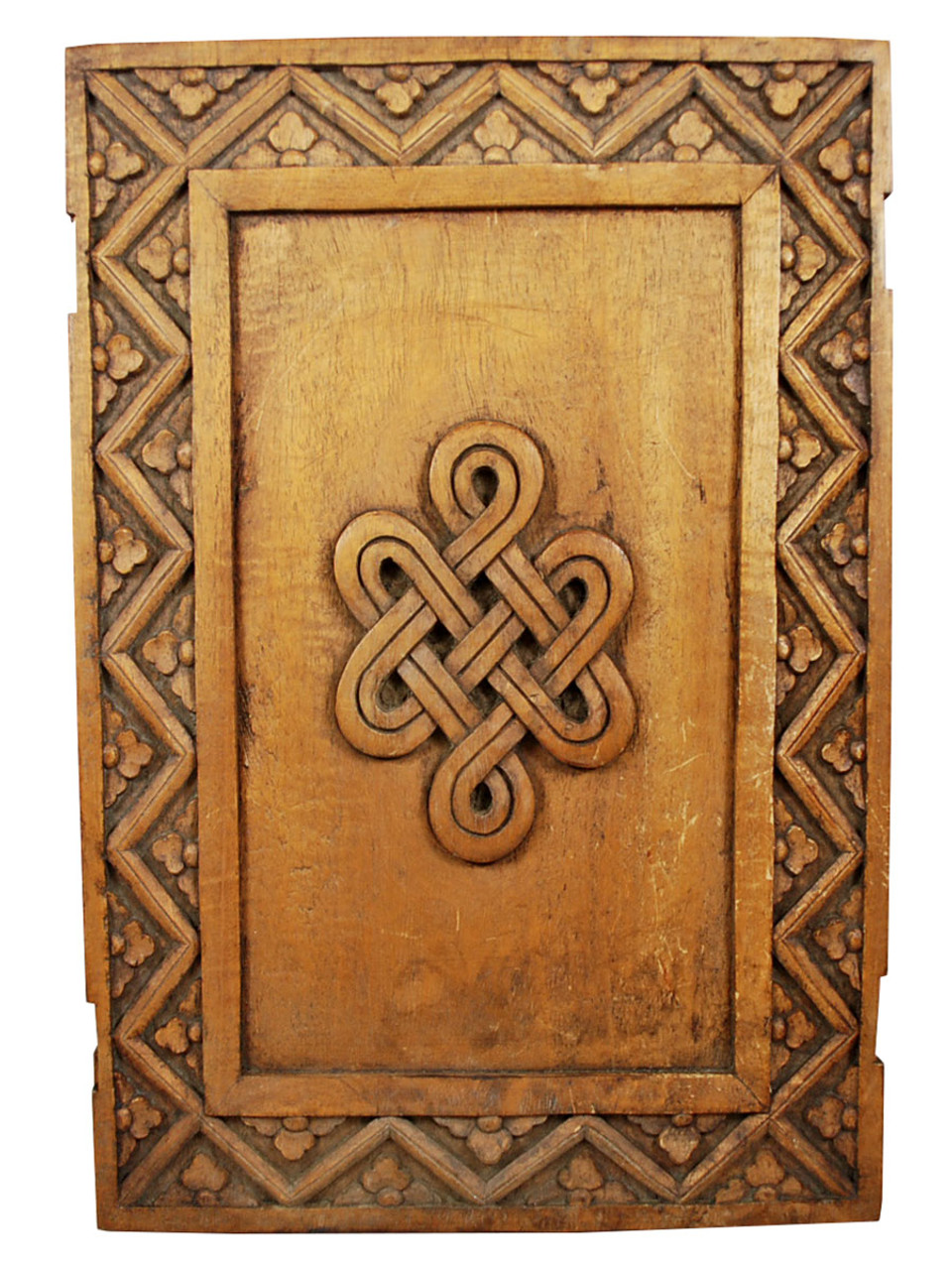 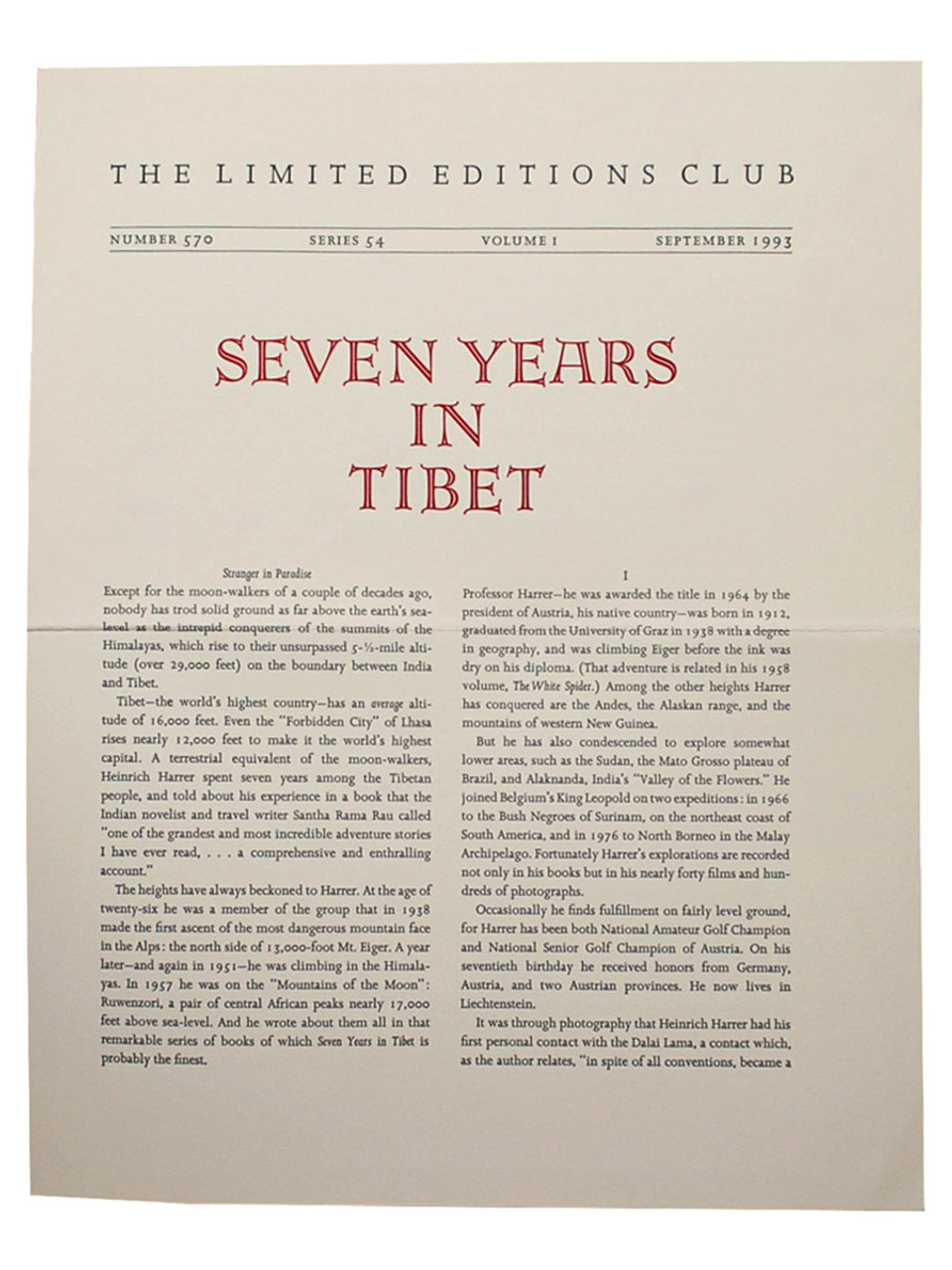 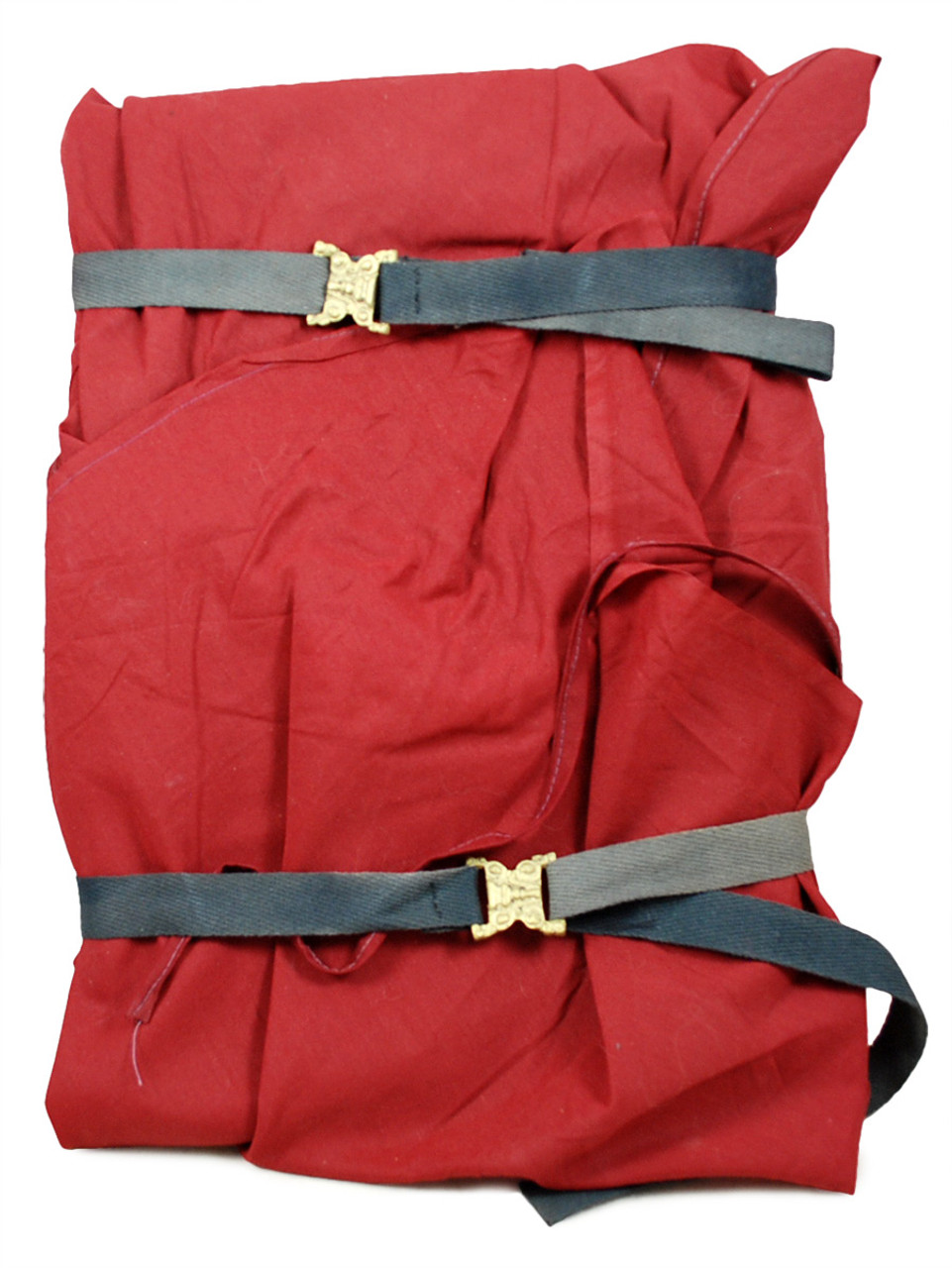 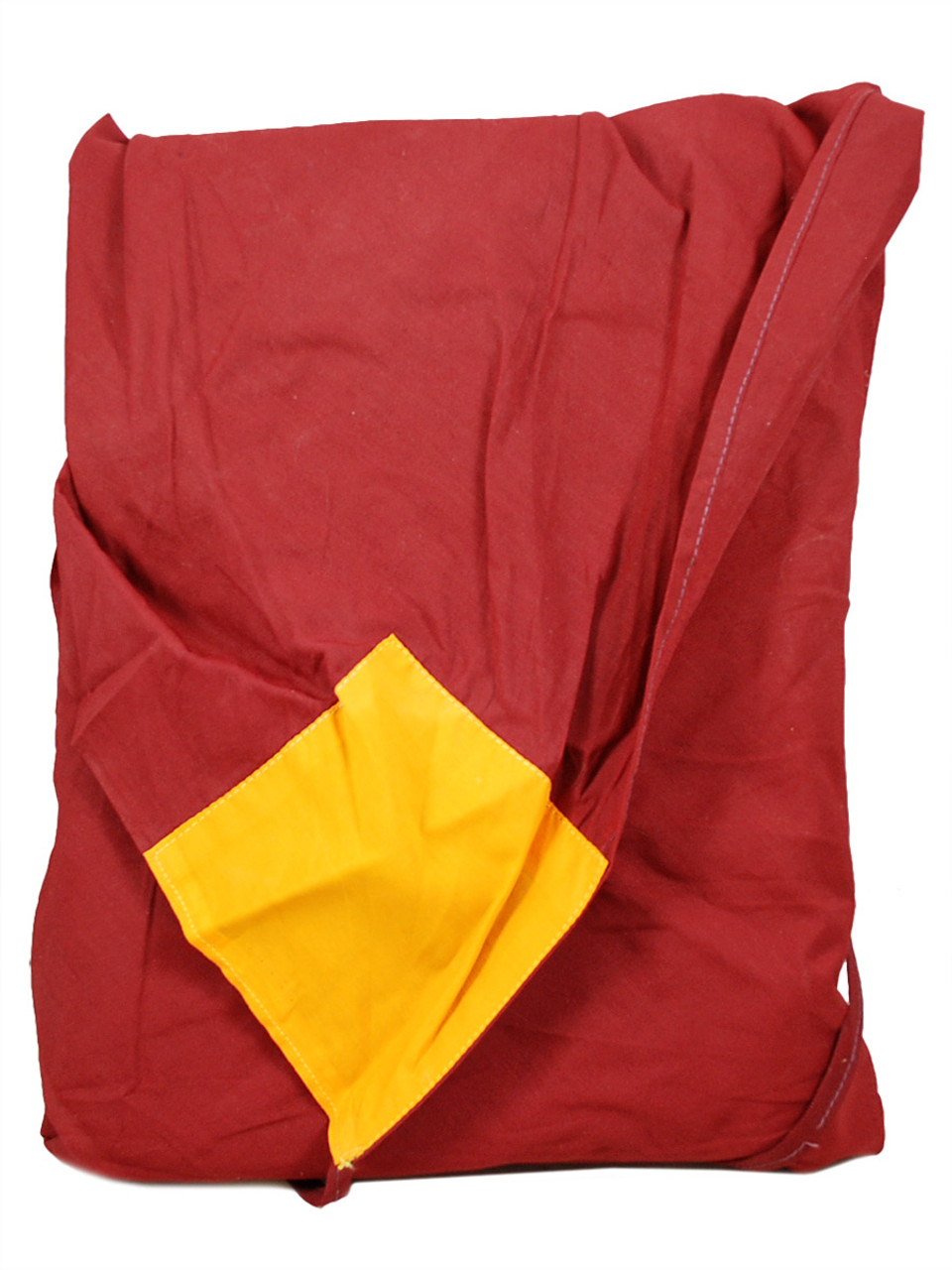 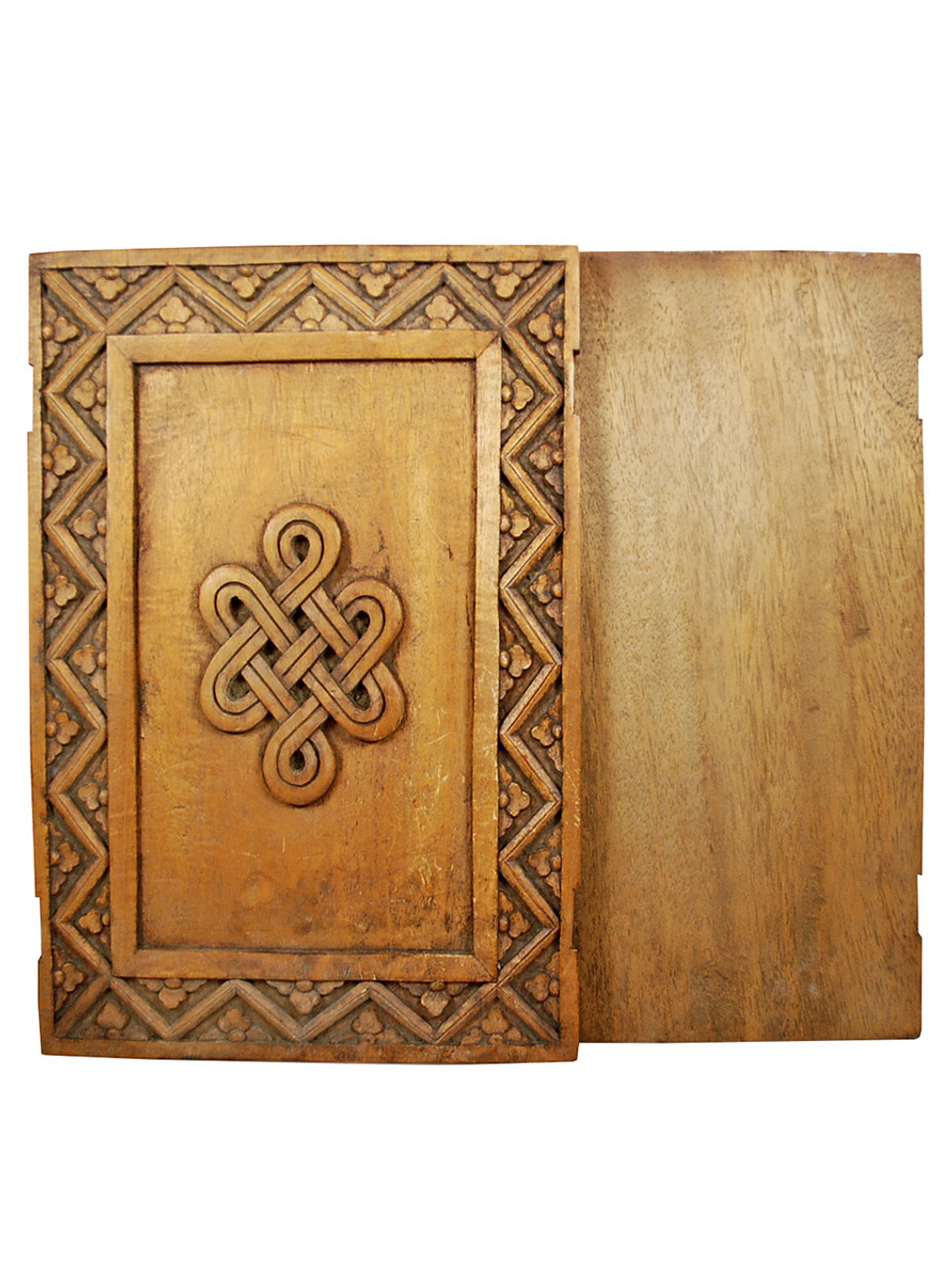 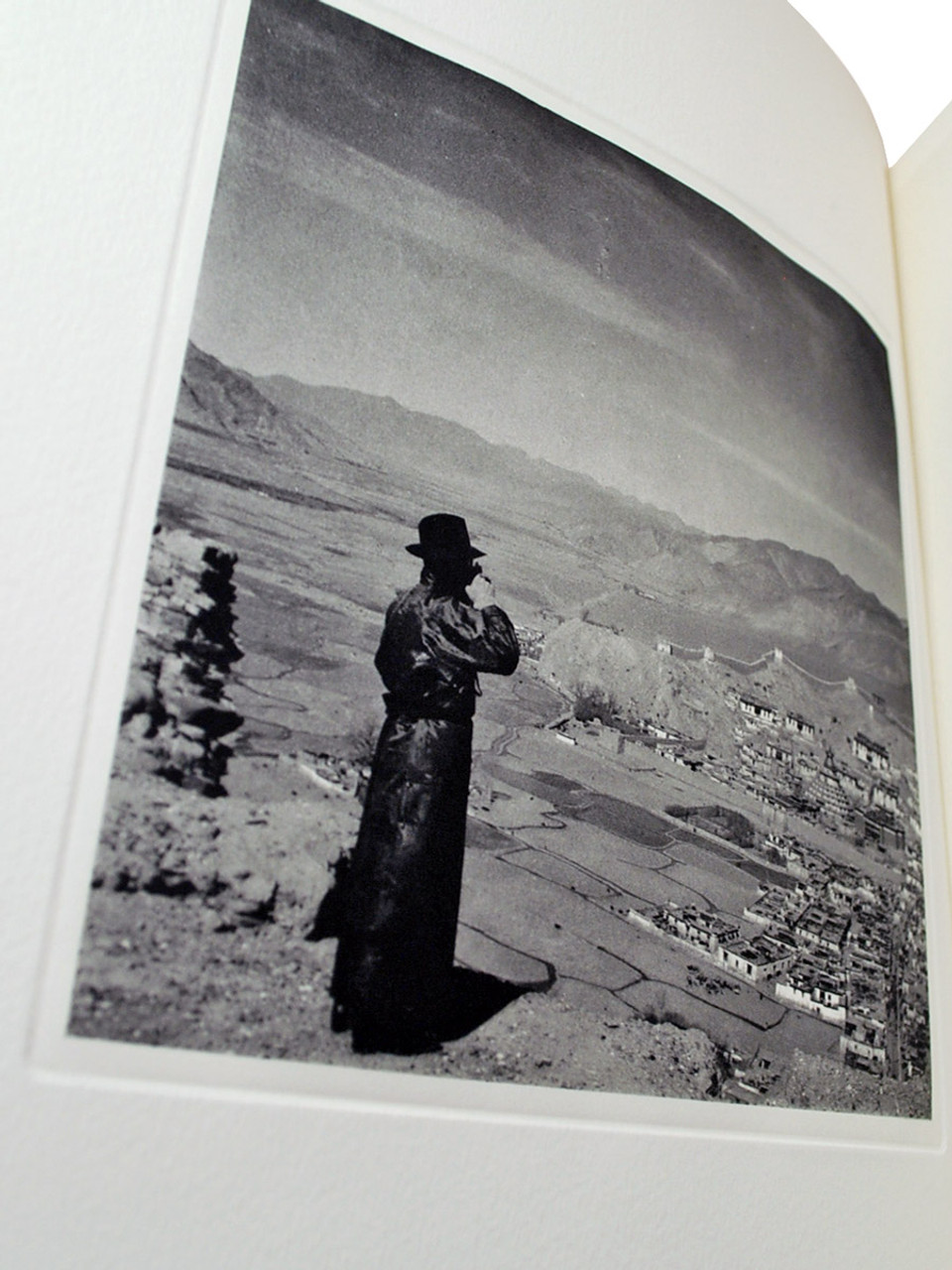 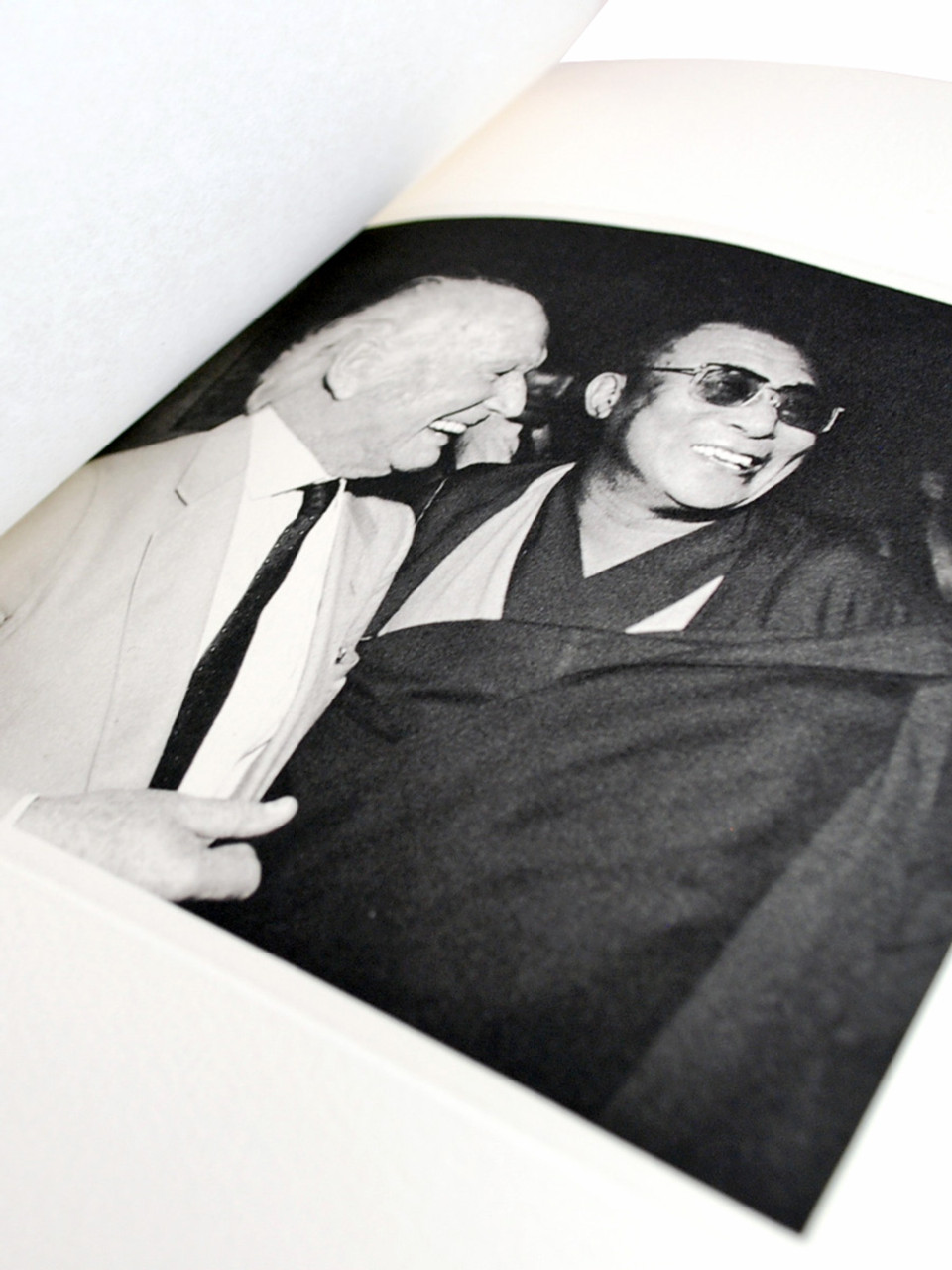 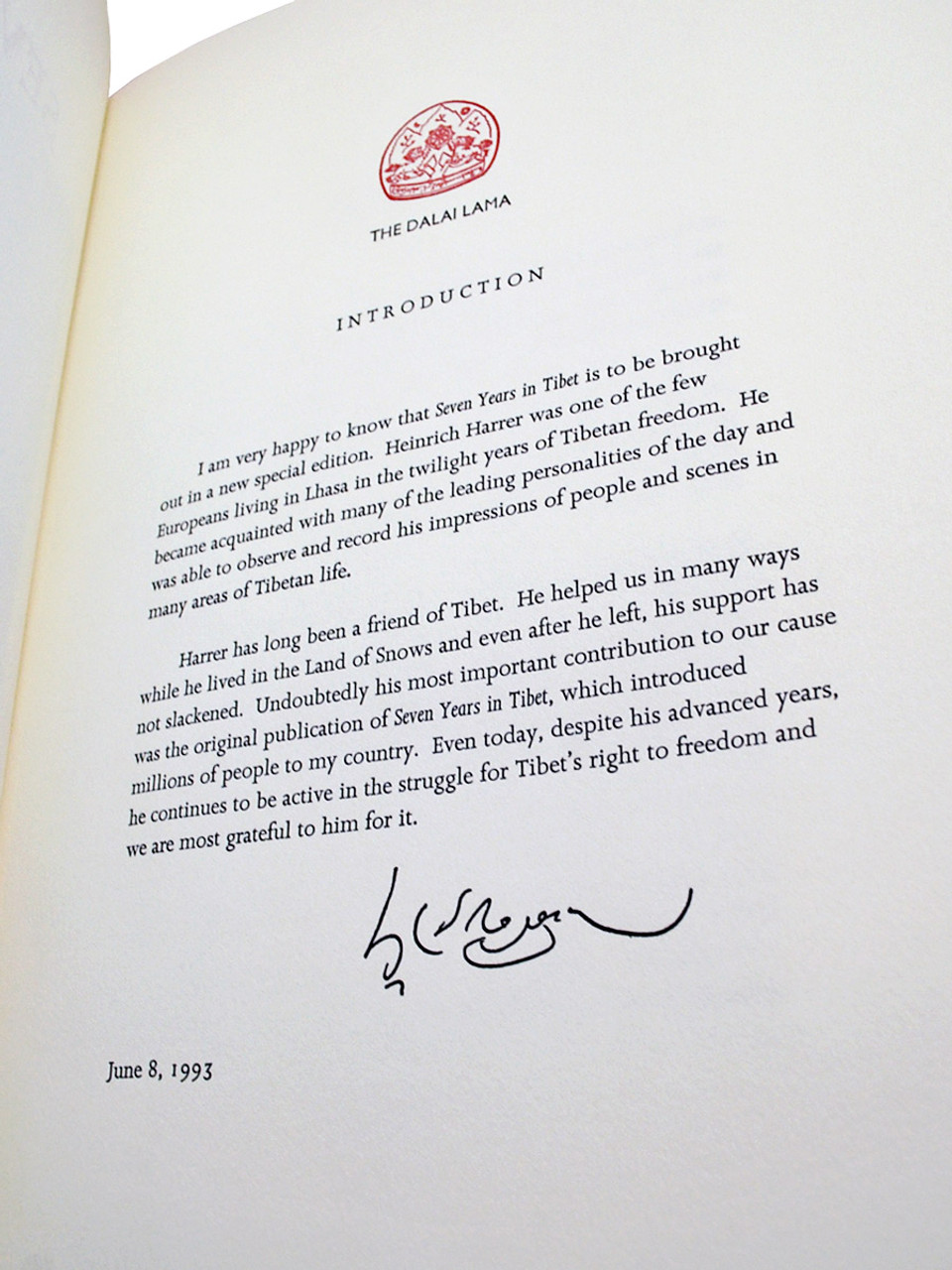 "I am very happy to know that Seven Years in Tibet is to be brought out in a new special edition. Heinrich Harrer was one of the few Europeans living in Lhasa in the twilight years of Tibetan freedom." - The Dalai Lama, 1993

Personally signed by Heinrich Harrer and Limited to only 300

New York: Limited Editions Club 1993. Heinrich Harrer "Seven Years In Tibet: My Life Before, During and After".  Hardcover. Very Fine with the maroon cotton sleeve, black cloth ties, and teak boards. Quarto (9" x 13"), bound in pure Bure white silk imported from India with a Tibetan good luck charm blindstamped in the center of the front cover. With a special introduction by the Dalai Lama for whom Harrer became the unofficial secular tutor when the Tibetan spiritual guide was fourteen. This is the very low number 21 of only 300 numbered copies SIGNED by Heinrich Harrer directly onto the special limitation page. Harrer also contributes six photogravures produced from his original negatives. A map of Harrer's Tibetan journeys is laid in loosely, as issued by the publisher.

Signed Limited Edition. This is number 21 of  only 300 copies signed by the author.


Seven Years in Tibet: My Life Before, During and After (1952; German: Sieben Jahre in Tibet. Mein Leben am Hofe des Dalai Lama; 1954 in English) is an autobiographical travel book written by Austrian mountaineer Heinrich Harrer based on his real life experiences in Tibet between 1944 and 1951 during the Second World War and the interim period before the Communist Chinese People's Liberation Army invaded Tibet in 1950.

The astonishing adventure classic about life in Tibet just before the Chinese Communist takeover is now repackaged for a new generation of readers.

In this vivid memoir that has sold millions of copies worldwide, Heinrich Harrer recounts his adventures as one of the first Europeans ever to enter Tibet and encounter the Dalai Lama.

This elaborate book chronicles the escape of Heinrich Harrer, an accomplished Austrian skier, mountaineer, and sportsman, from an English prisoner of war camp in India during World War II. He crossed the high Tibetan plateau, as only an accomplished climber could, and took up residency in Lhasa eventually as the tutor of the current Dalai Lama when he was the fourteen-year-old god king of an independent Tibet. The book has six gravure plates made from photographs taken by the author contemporaneously with his time in Tibet.

The silk Bure binding is protected by an enveloping cotton pi-chu, or sleeve, and both are encased by two magnolia wood boards held in place by a thong. A Tibetan good luck charm has been carved into the top magnolia board by monks at a Tibetan refugee center in Darjeeling, India. This and all other materials have been imported from India.

The Limited Editions Club has been making fine press books and livres d'artistes since its founding in 1929 by George Macy, and has produced roughly 600 volumes featuring some of the best work of major living authors and artists. In its early years it worked with artists such as Henri Matisse, Grant Wood, and Pablo Picasso, and in more recent years it has worked with Francesco Clemente, Willem De Kooning, Robert Motherwell, Balthus, and Ellsworth Kelly, among others. From the beginning it used prominent book designers such as Bruce Rogers and Sir Francis Meynell.

The importance of the Club is shown by the acquisition in 1970 of its archives by the Harry Ransom Center at the University of Texas in Austin, and that institution's decision and commitment to continue to acquire a complete set of the Club's publications. Books by the Limited Editions Club are included in most major academic and independent research libraries, many public libraries, and in the Museum of Modern Art, the Victoria & Albert Museum, the Walker Art Center, the Minneapolis Museum of Art, and the Nelson-Atkins Museum of Art.

In 2013, the Limited Editions Club received the annual institutional award of the American Printing History Association "for distinguished contribution to the study, recording, preservation or dissemination of printing history."

"One of the grandest and most incredible adventure stories I have ever read." - The New York Times Book Review

"First there is the incredibly adventurous twenty-one month trek across rugged mountain and desolate plain to the mysterious heartland of Tibet; then the fascinating picture, rich in amazing detail, of life in Lhasa... Final chapters draw an intimate portrait of the youthful Dalai Lama." - The Atlantic Monthly 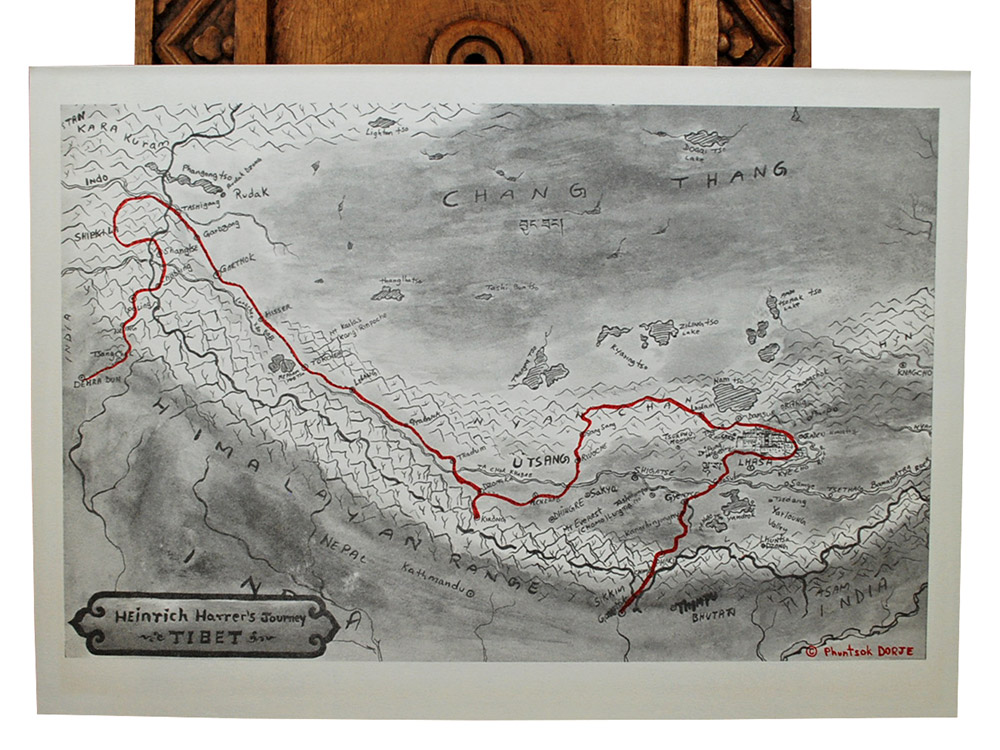 Heinrich Harrer (6 July 1912 - 7 January 2006) was an Austrian mountaineer, sportsman, geographer, and author. He is best known for being on the four-man climbing team that made the first ascent of the North Face of the Eiger in Switzerland, and for his books Seven Years in Tibet (1952) and The White Spider (1959).

Harrer reached Tibet's capital city, Lhasa, on 15 January 1946, having crossed Western Tibet (passing holy Mount Kailash), the South-West with Gyirong County, and the Northern Changthang. In 1948, Harrer became a salaried official of the Tibetan government, translating foreign news and acting as the Court photographer. Harrer first met the 14th Dalai Lama when he was summoned to the Potala Palace and asked to make a film about ice skating, which Harrer had introduced to Tibet. Harrer built a cinema for him, with a projector run off a Jeep engine. Harrer soon became the Dalai Lama's tutor in English, geography, and some science, and Harrer was astonished at how fast his pupil absorbed the Western world's knowledge. A strong friendship developed between the two that would last the rest of their lives.

In 1952, Harrer returned to Austria where he documented his experiences in the books Seven Years in Tibet (1952) and Lost Lhasa (1953). Seven Years in Tibet was translated into 53 languages, and was a bestseller in the United States in 1954, selling three million copies. The book was the basis of two films of the same title, the first in 1956 and the second in 1997, starring Brad Pitt in the role of Harrer.

In Seven Years in Tibet, Harrer wrote: "Wherever I live, I shall feel homesick for Tibet. I often think I can still hear the cries of wild geese and cranes and the beating of their wings as they fly over Lhasa in the clear, cold moonlight. My heartfelt wish is that my story may create some understanding for a people whose will to live in peace and freedom has won so little sympathy from an indifferent world." 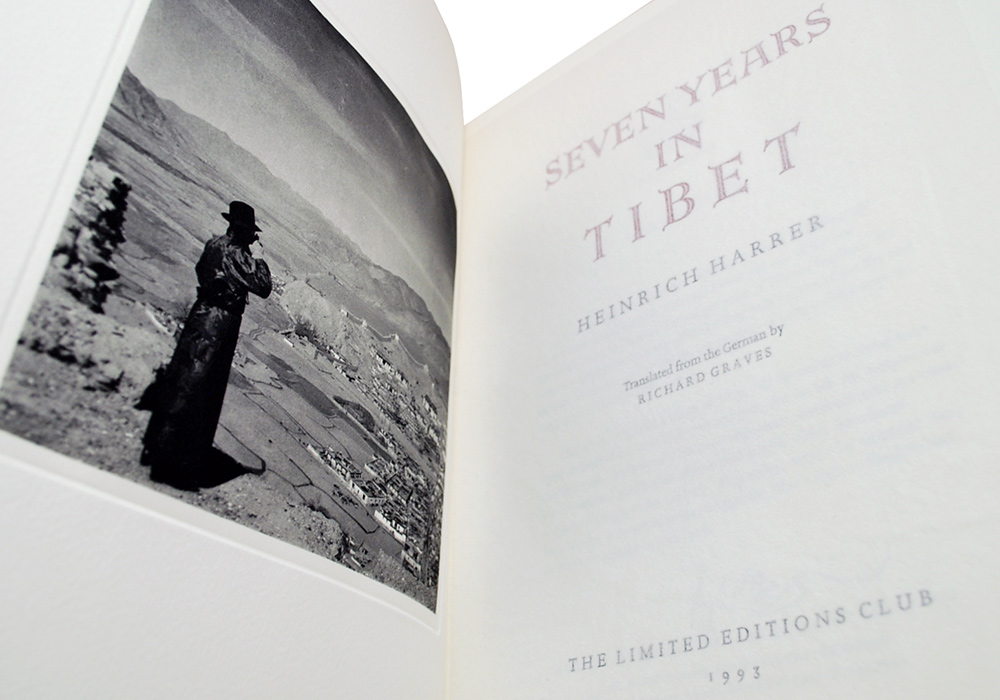 Personally hand signed by Heinrich Harrer on a special limitation page. Enhance your library with this luxurious leather bound heirloom from Easton Press. One of only 1250 signed limited editions...

Personally hand signed by Heinrich Harrer on a special limitation page. Enhance your library with this luxurious leather bound heirloom from Easton Press. One of only 1250 signed limited editions...