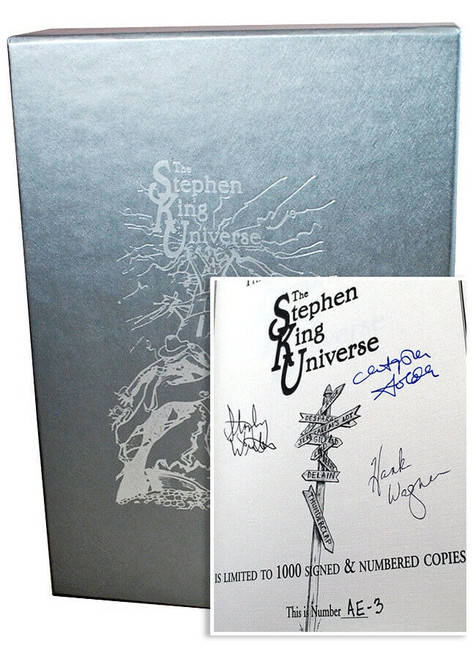 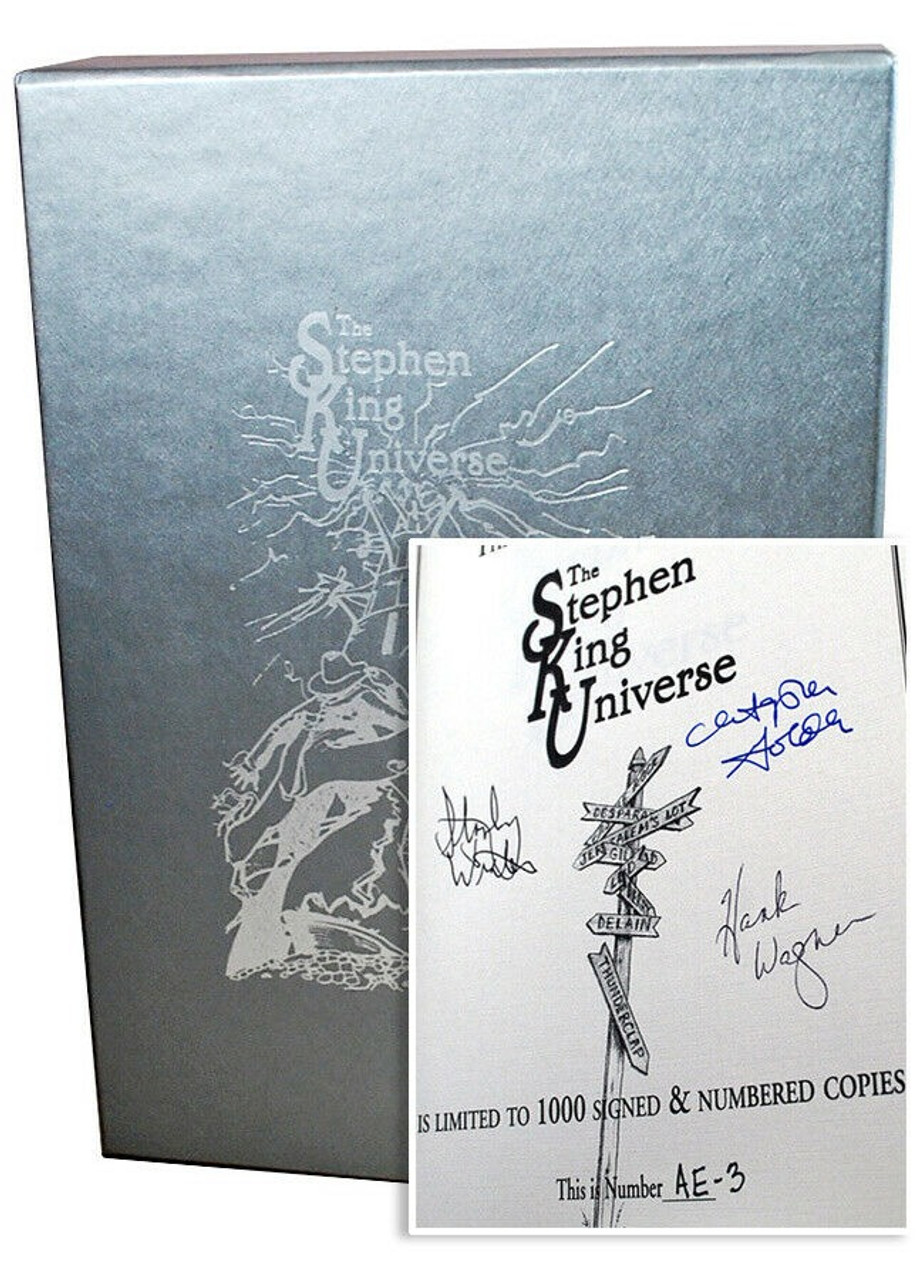 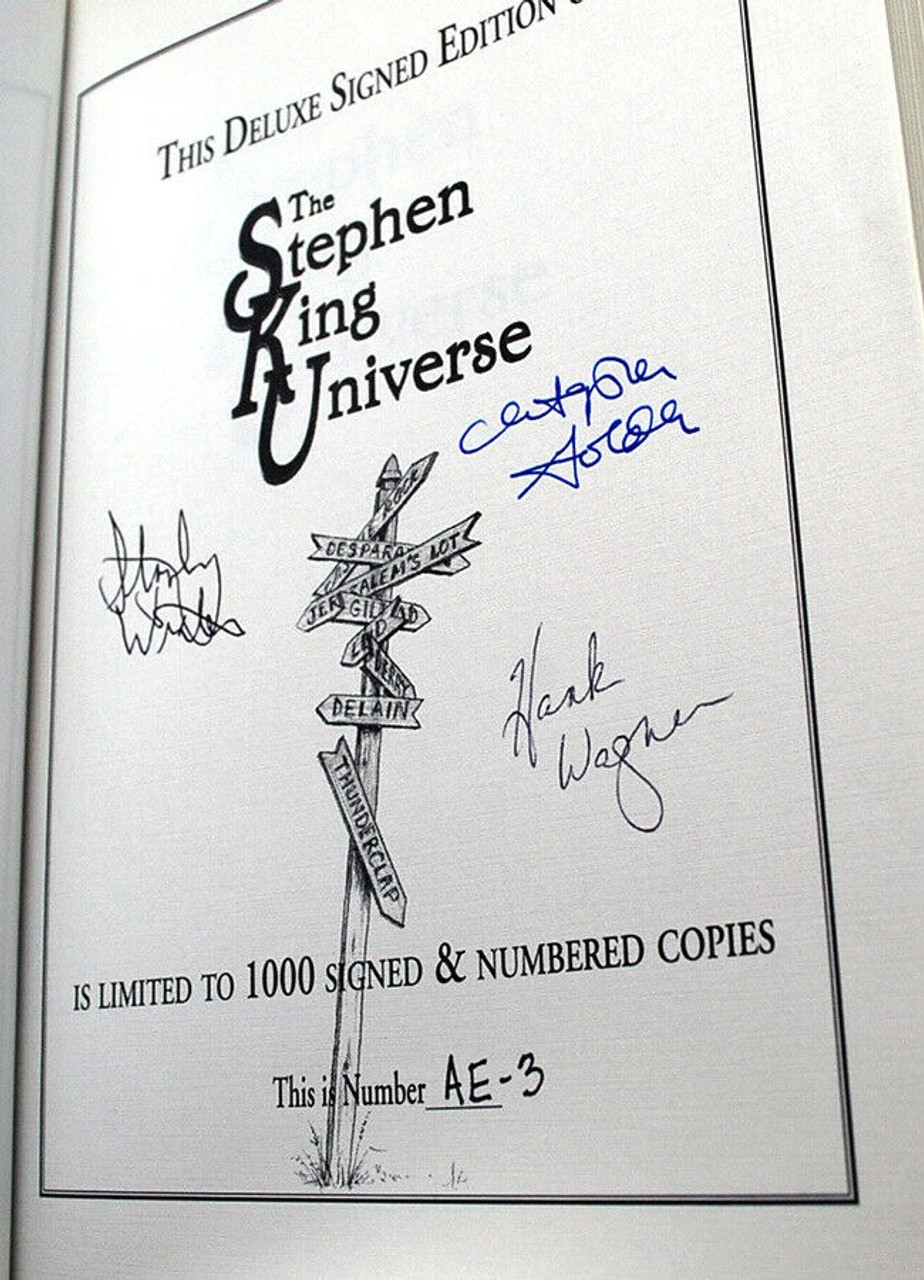 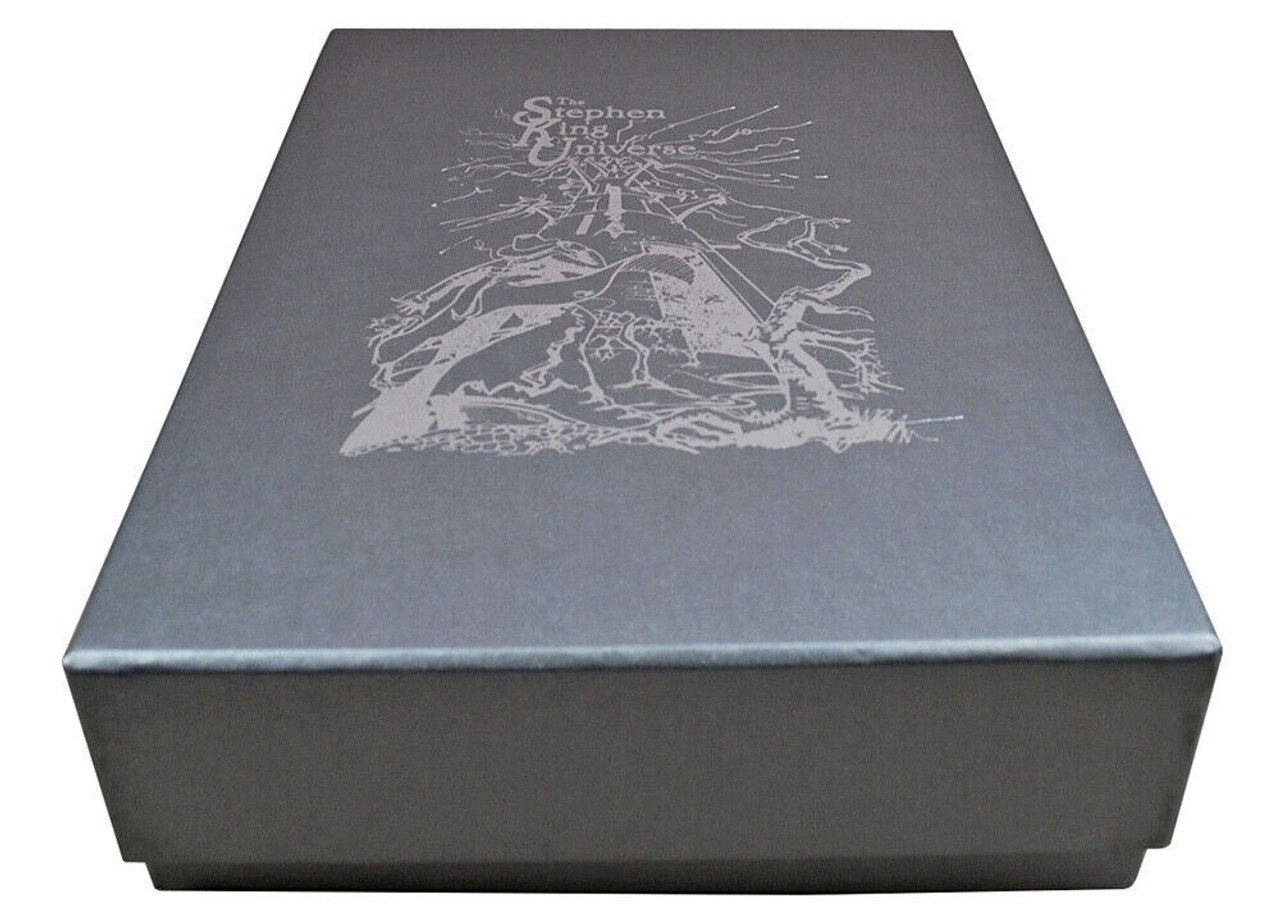 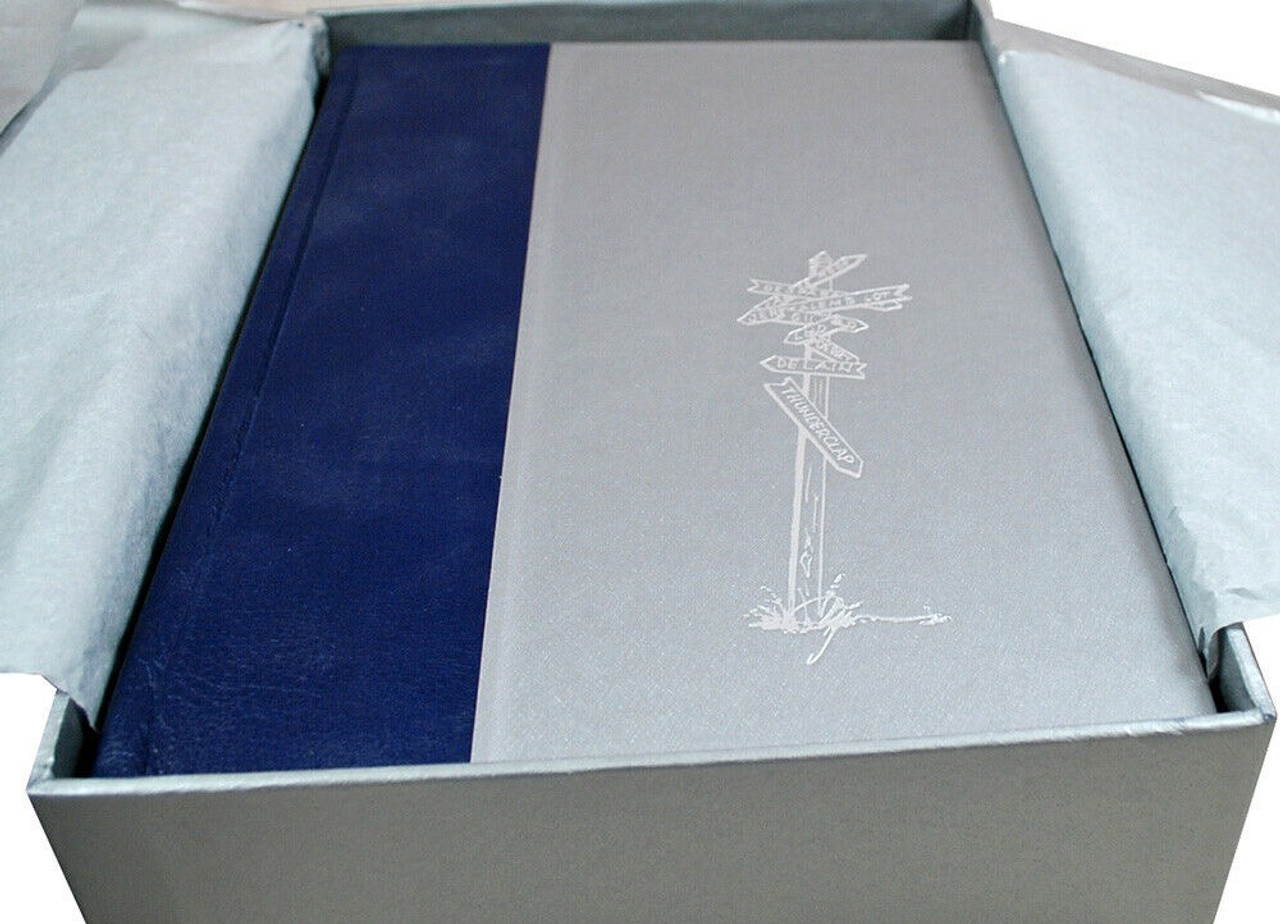 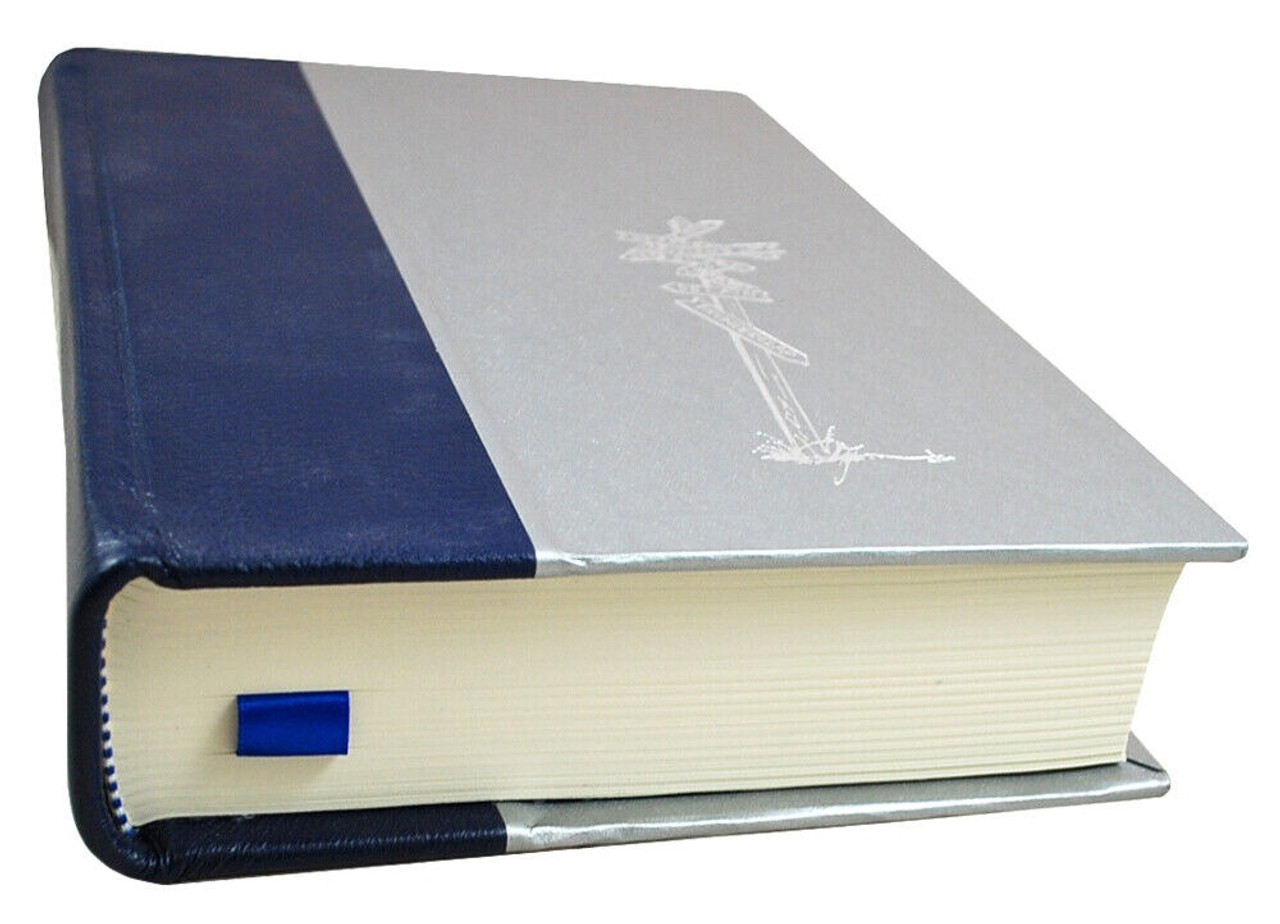 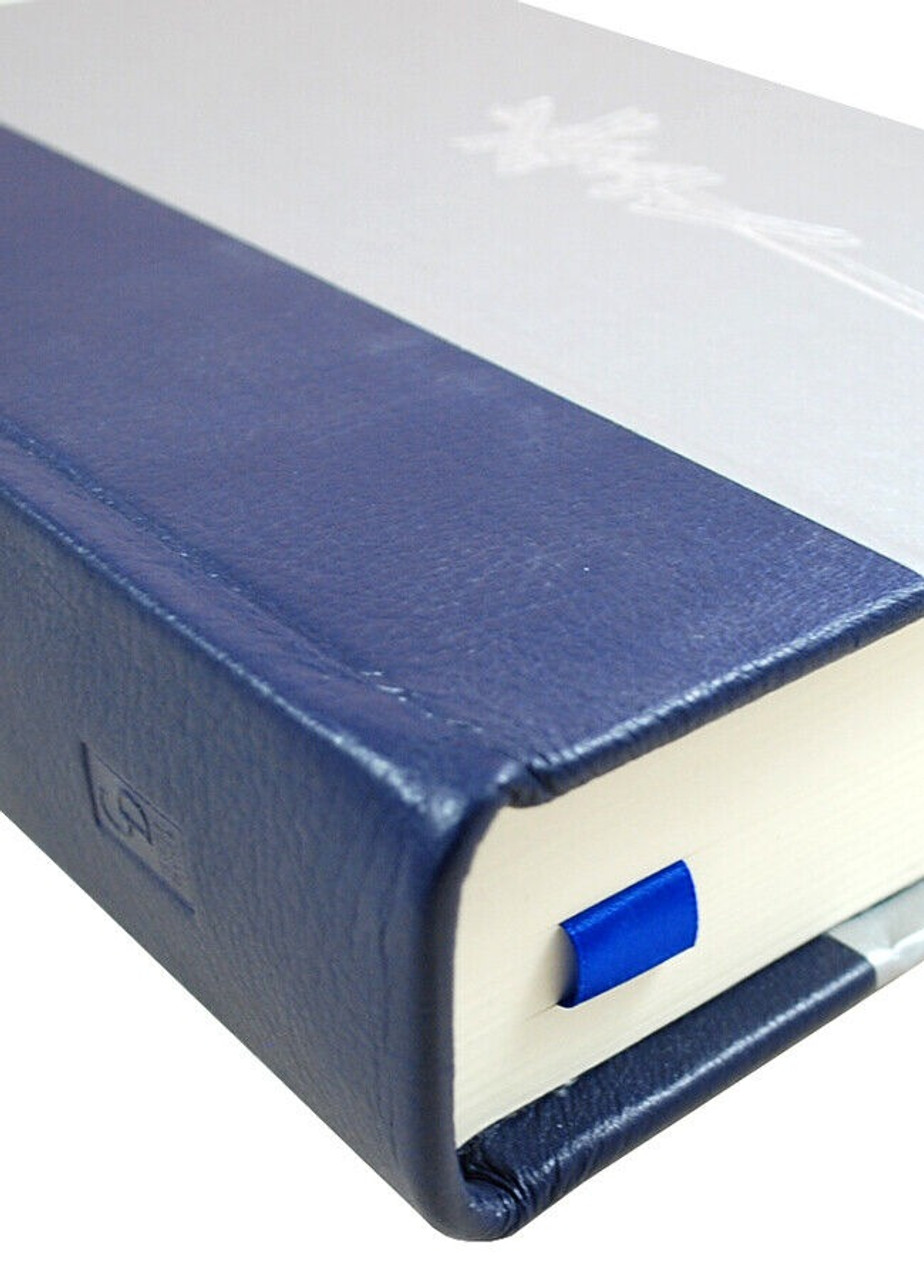 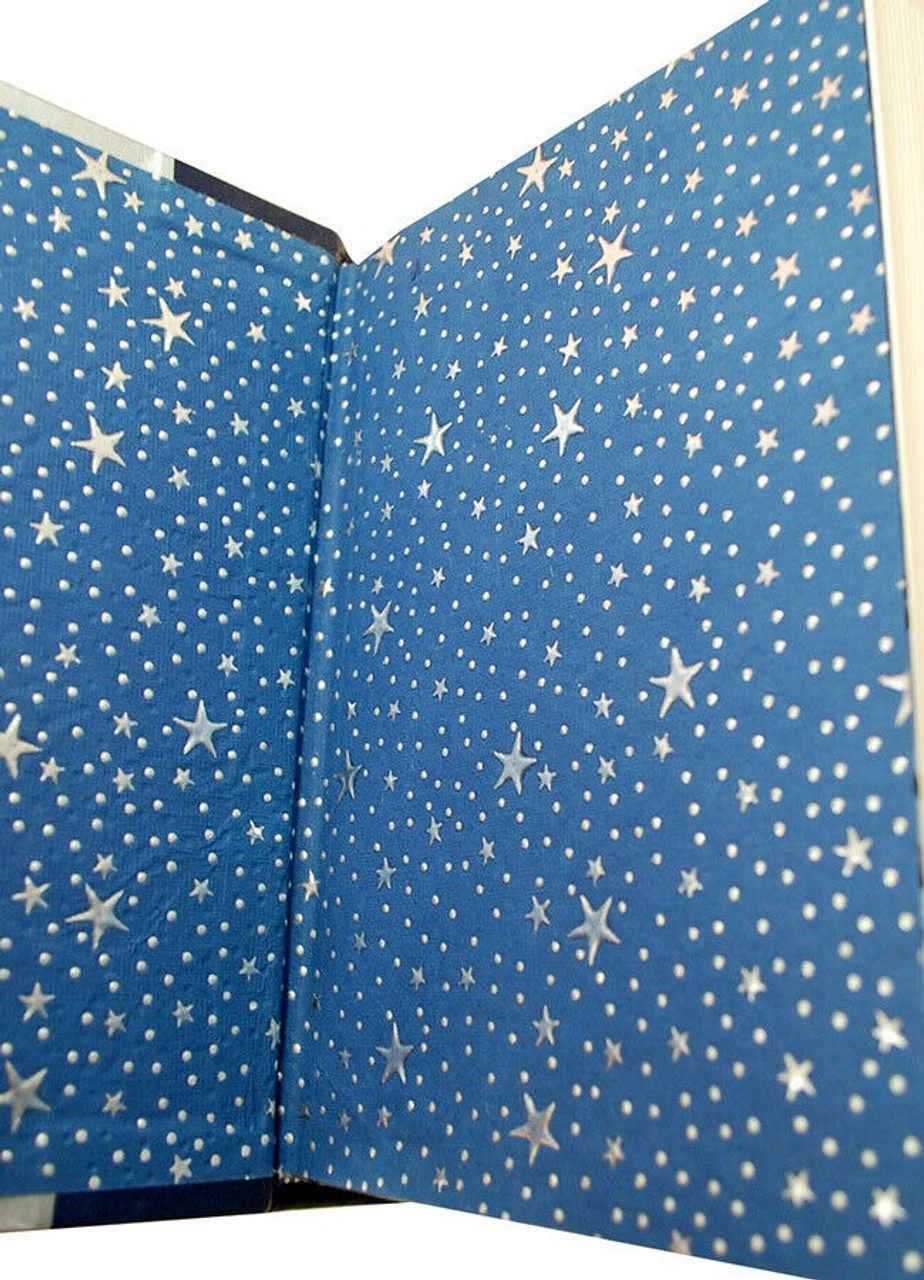 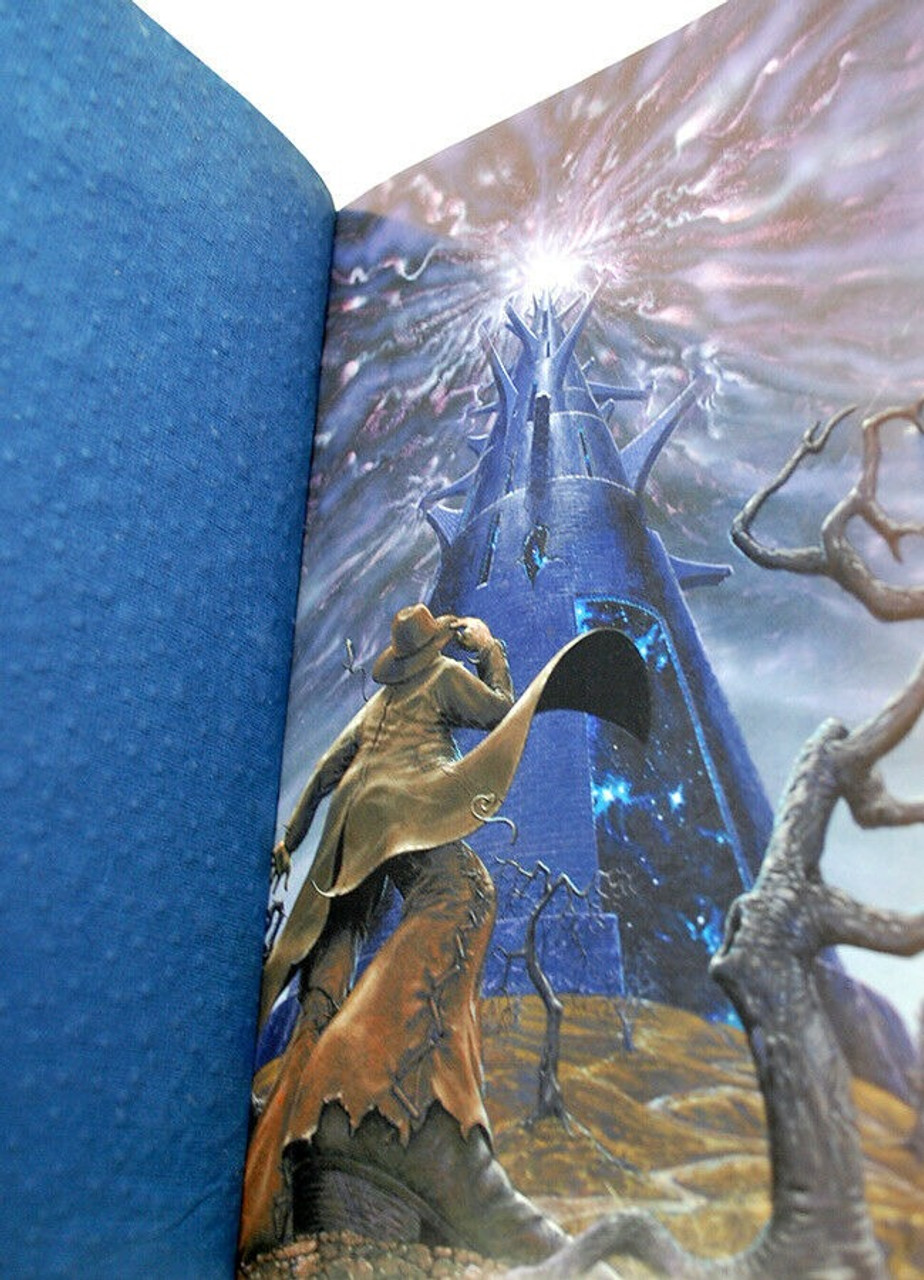 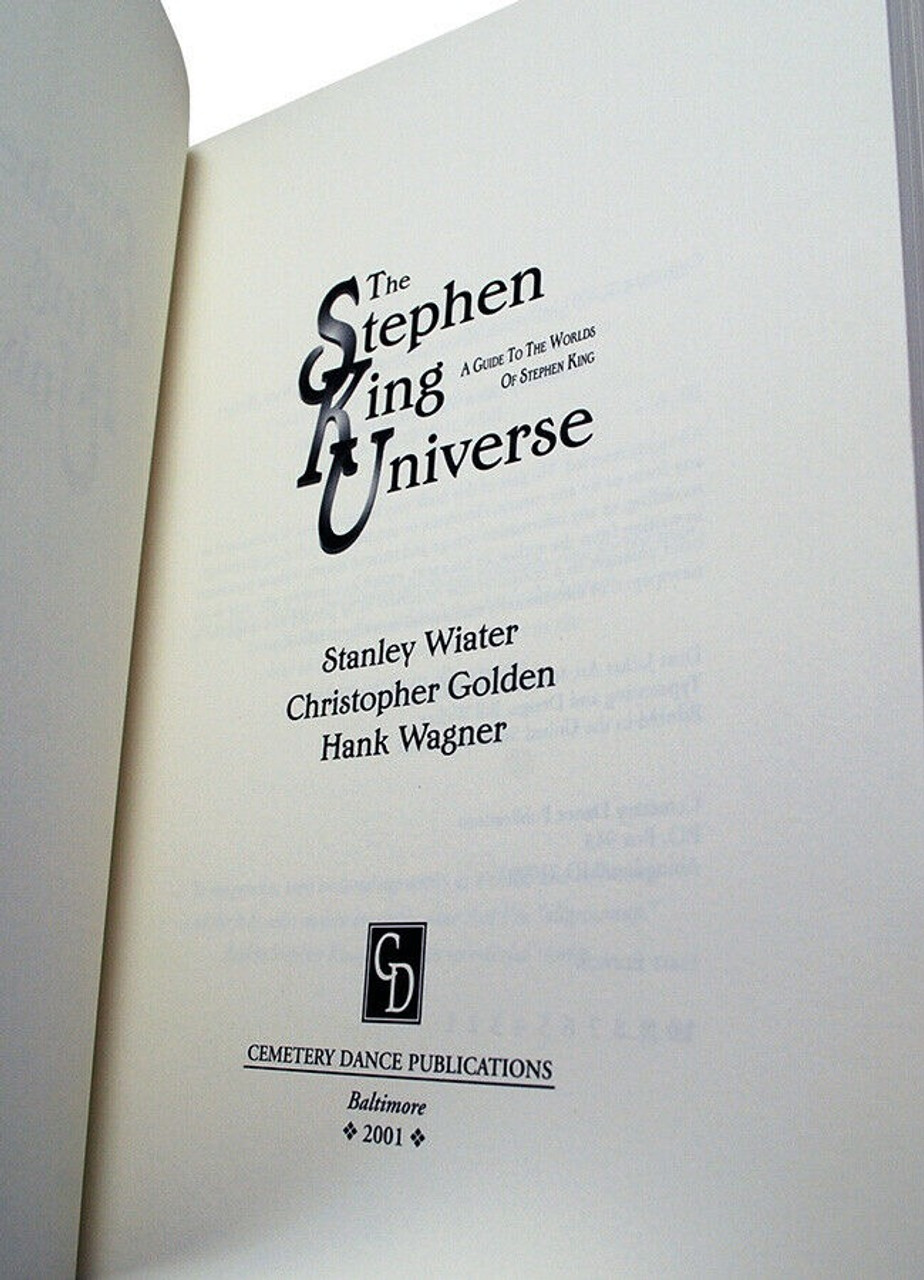 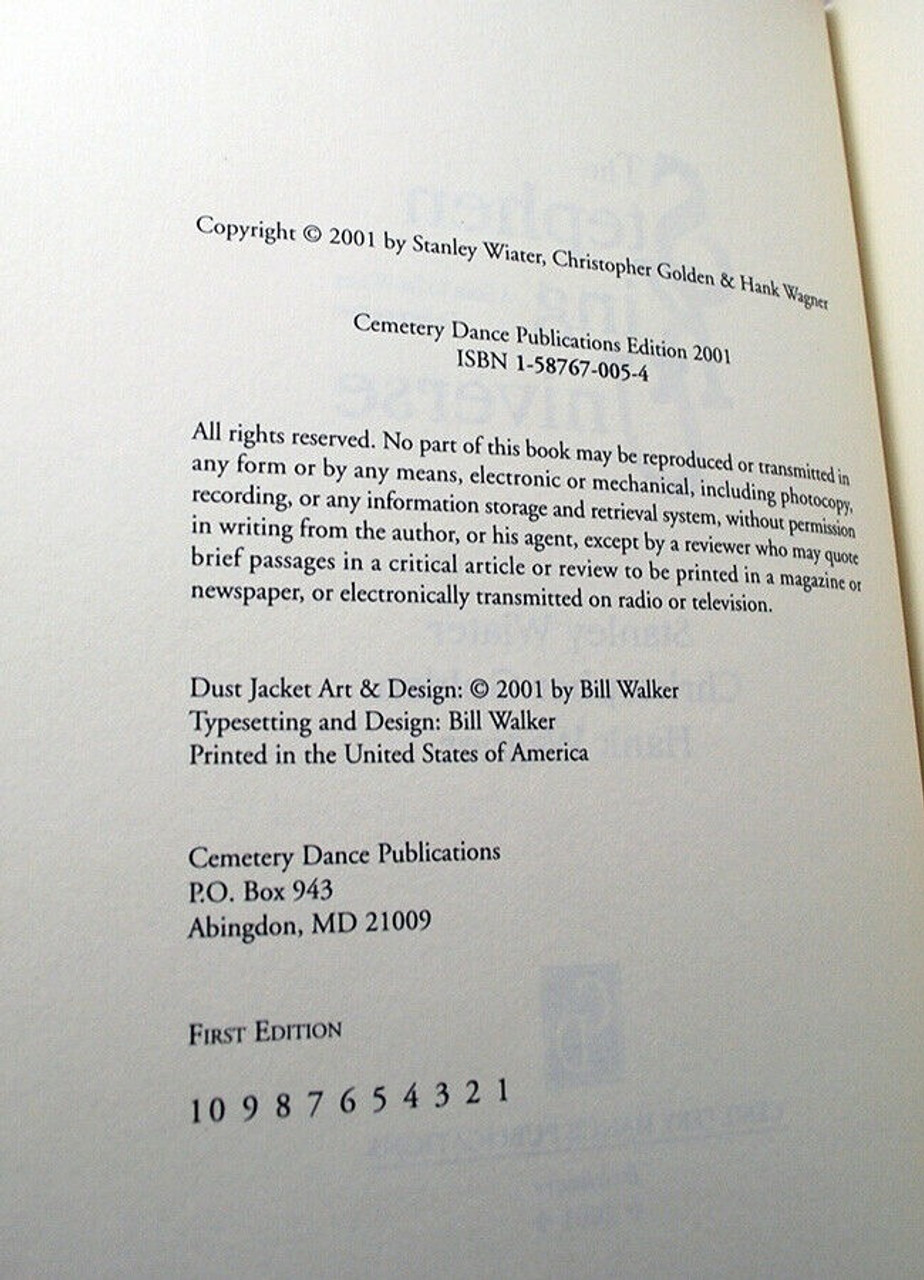 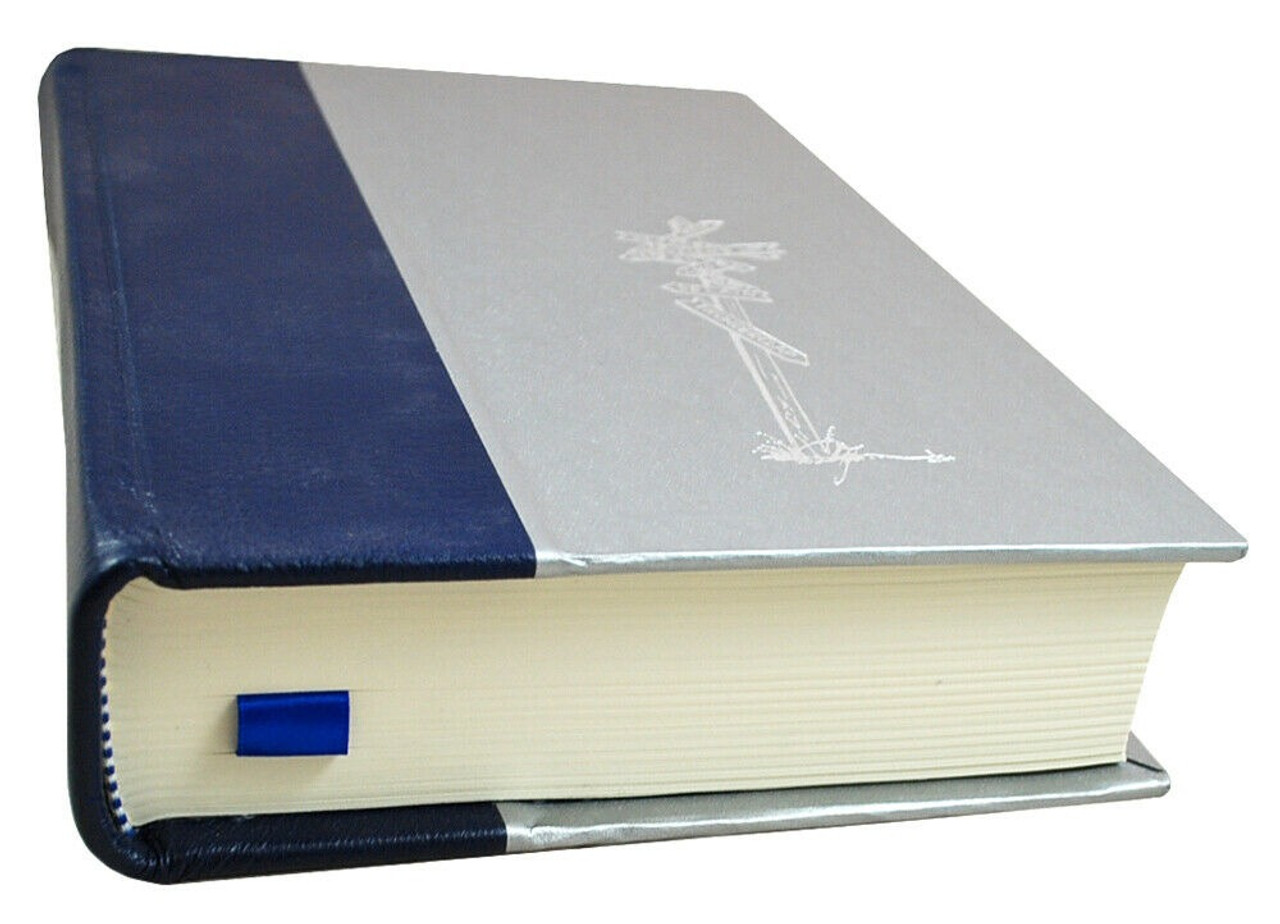 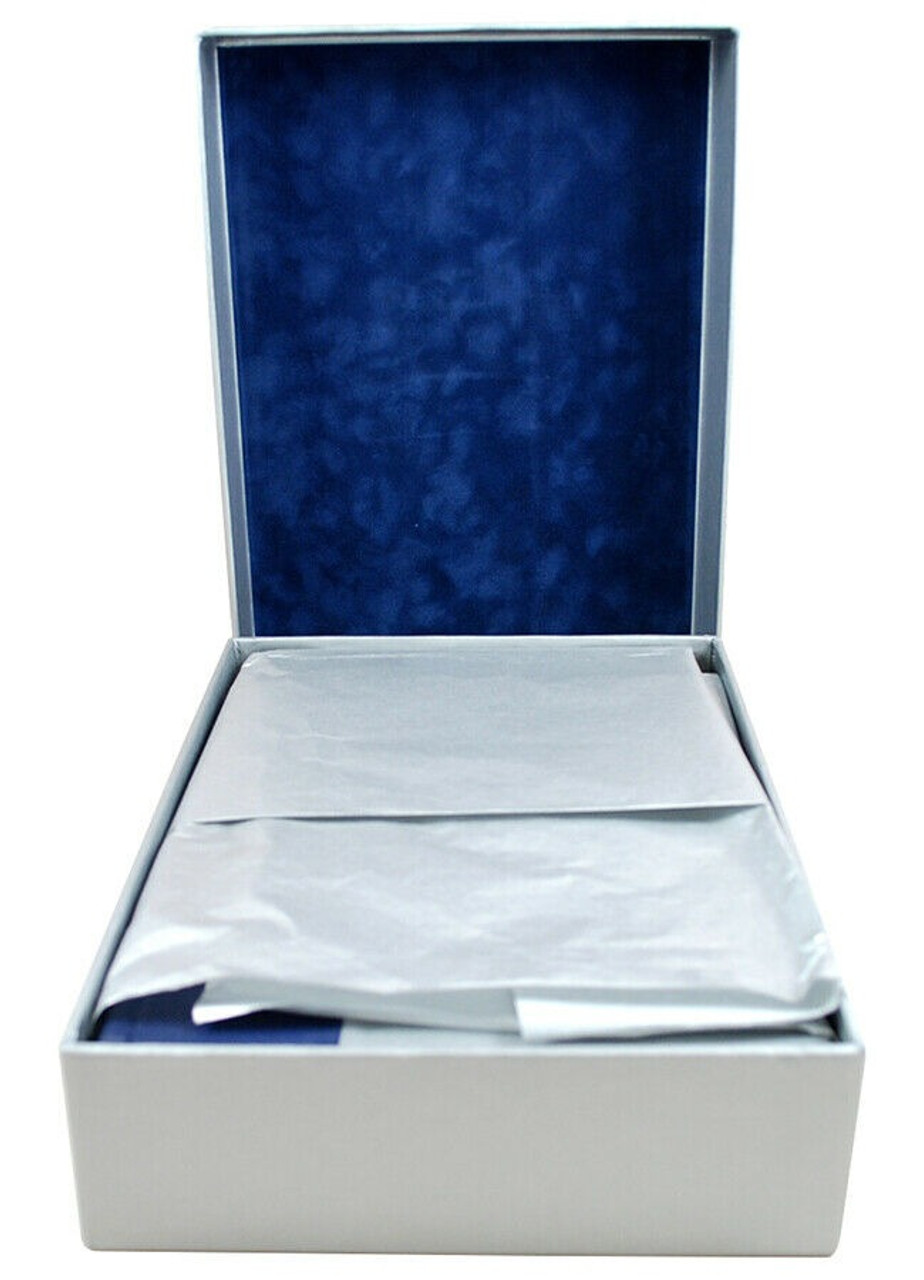 Cemetery Dance Publications 2001. "The Stephen King Universe: A Guide To The Worlds of Stephen King" Stanley Wiater & Christopher Golden with Hank Wagner. This item is now Out of Print and will not be available for purchase again. This is the special DELUXE SIGNED ARTIST EDITION and not to be confused with the regular books in the series. Traycased. Leather Bound. All photos of actual item.

This book was originally published in two states:

Spanning 50 detailed chapters and more than 130,000 words in length, The Stephen King Universe is an exhaustive look at all of Stephen King's fiction and is accurately subtitled: A Guide to the Worlds of Stephen King. Complete and updated through Blood and Smoke, this ground-breaking reference work also examines the motion pictures, miniseries, and screen- and teleplays that King has written over the course of his amazing career. Works such as Sleepwalkers, Golden Years and Storm of the Century. Appendices will also be included, covering topics such as Recommended Further Reading and Recommended Web Sites.

The basic thrust of The Stephen King Universe is to tie together -- for the very first time -- the various threads in terms of the characters and settings that have always existed in King's fiction. A few years ago, King himself admitted that all his worlds were truly part of the same universe, and this statement served as the co-authors' inspiration to assemble this critical guide for King's millions of loyal readers. The Stephen King Universe is the single most important non-fiction volume for every Stephen King library!

The Cemetery Dance Publications Limited Edition is bound in leather, with a full-color dustjacket, illustrated endpapers, and lots of other surprises. Plus it is protected inside a hand-crafted slipcase and is signed and numbered by authors Wiater, Golden, and Wagner.

The Deluxe Lettered Edition is also bound in leather, with all the same goodies as the Limited Edition, but it is protected inside a hand-crafted leather traycase and also includes a separate, specially-commissioned Stephen King Art Portfolio, featuring ten full-pages of stunning artwork inspired by King's finest works!