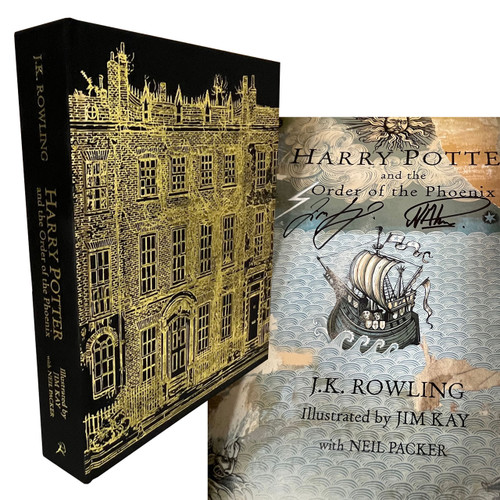 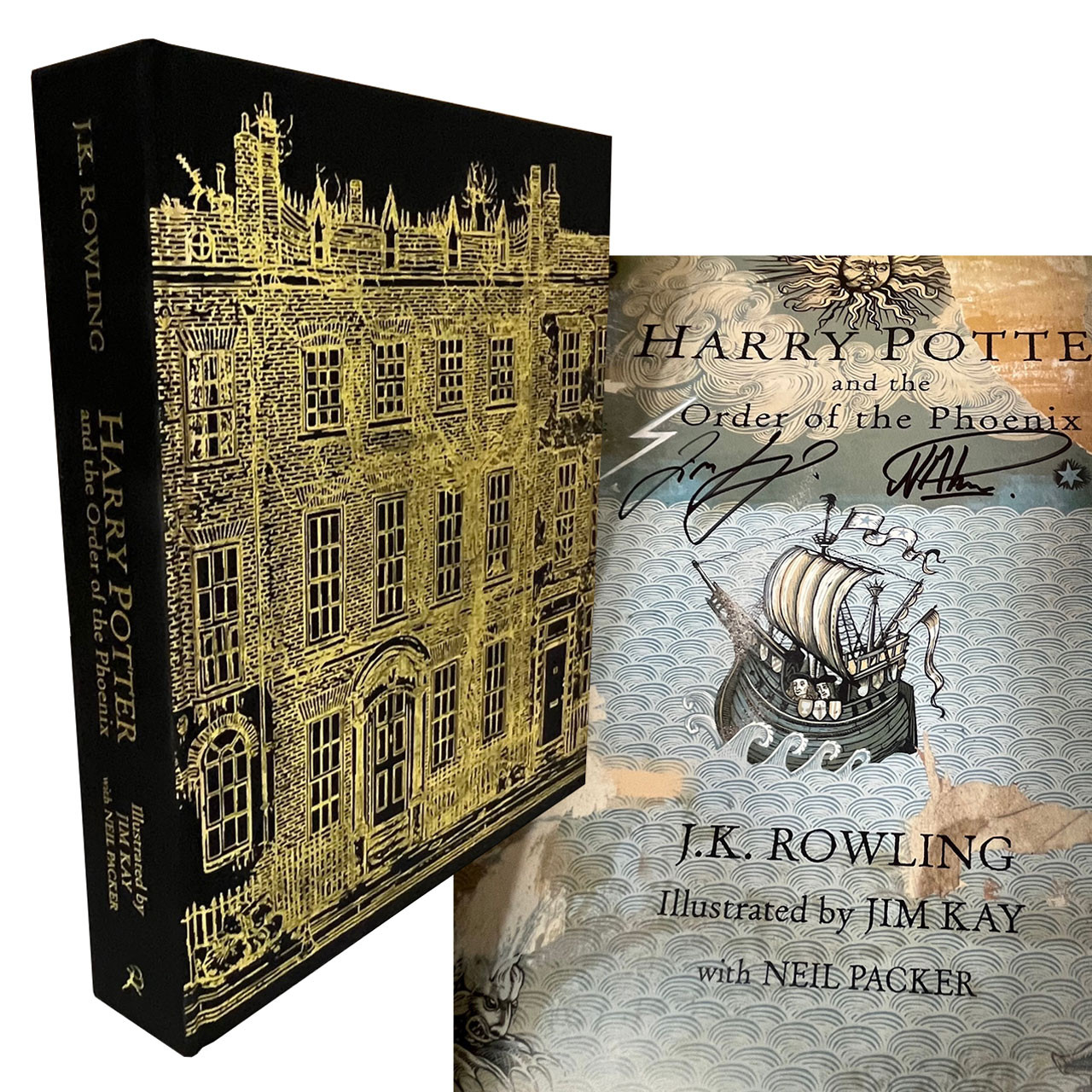 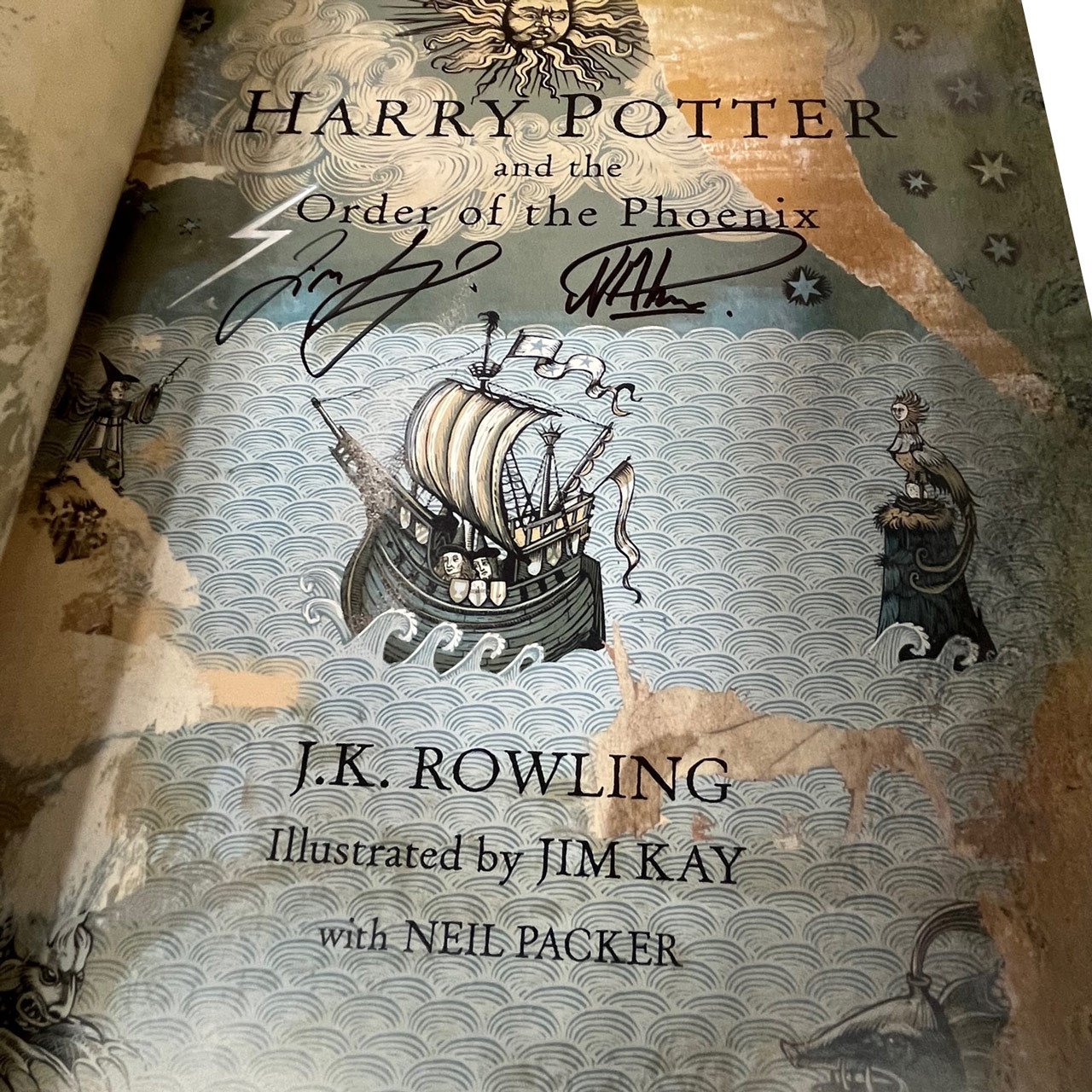 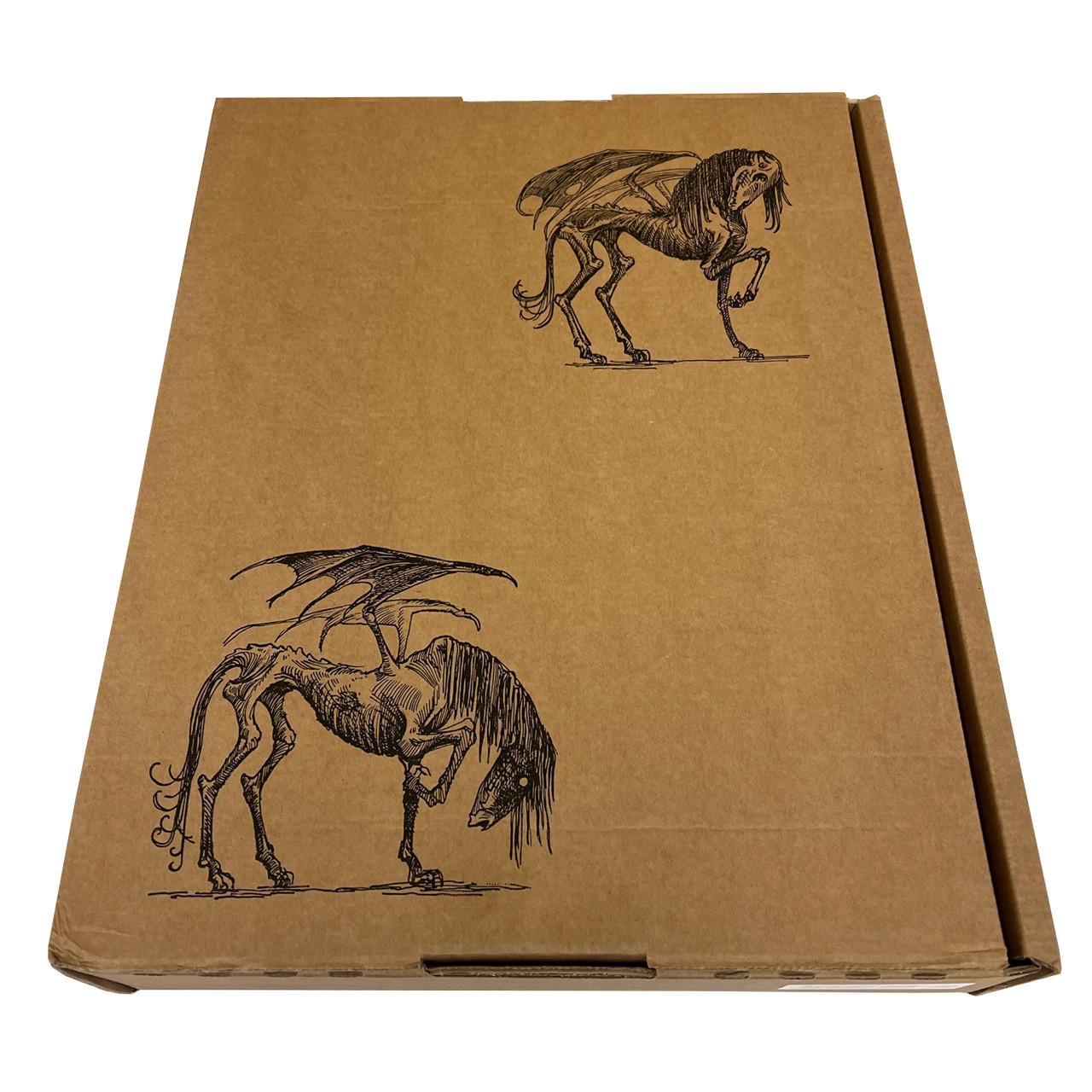 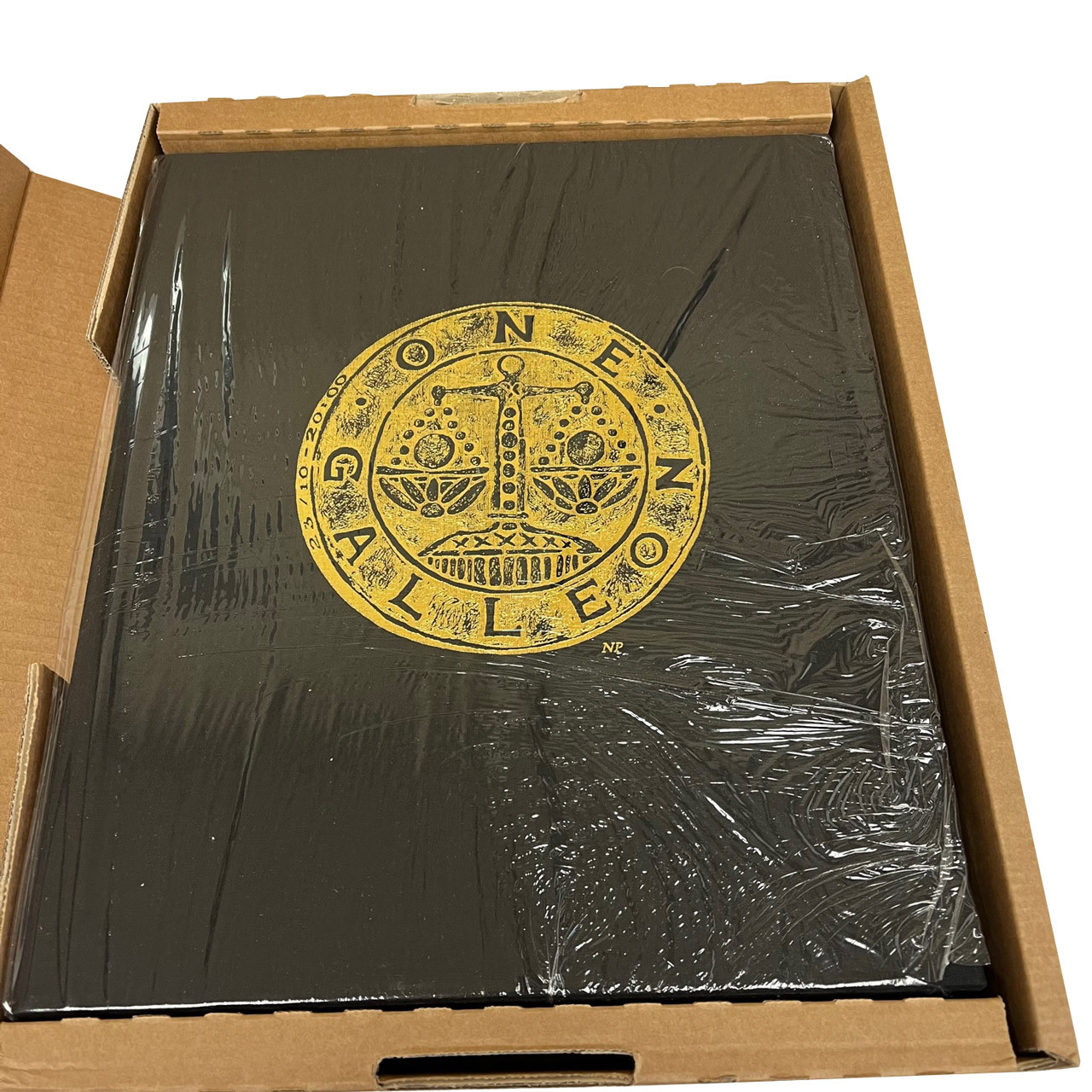 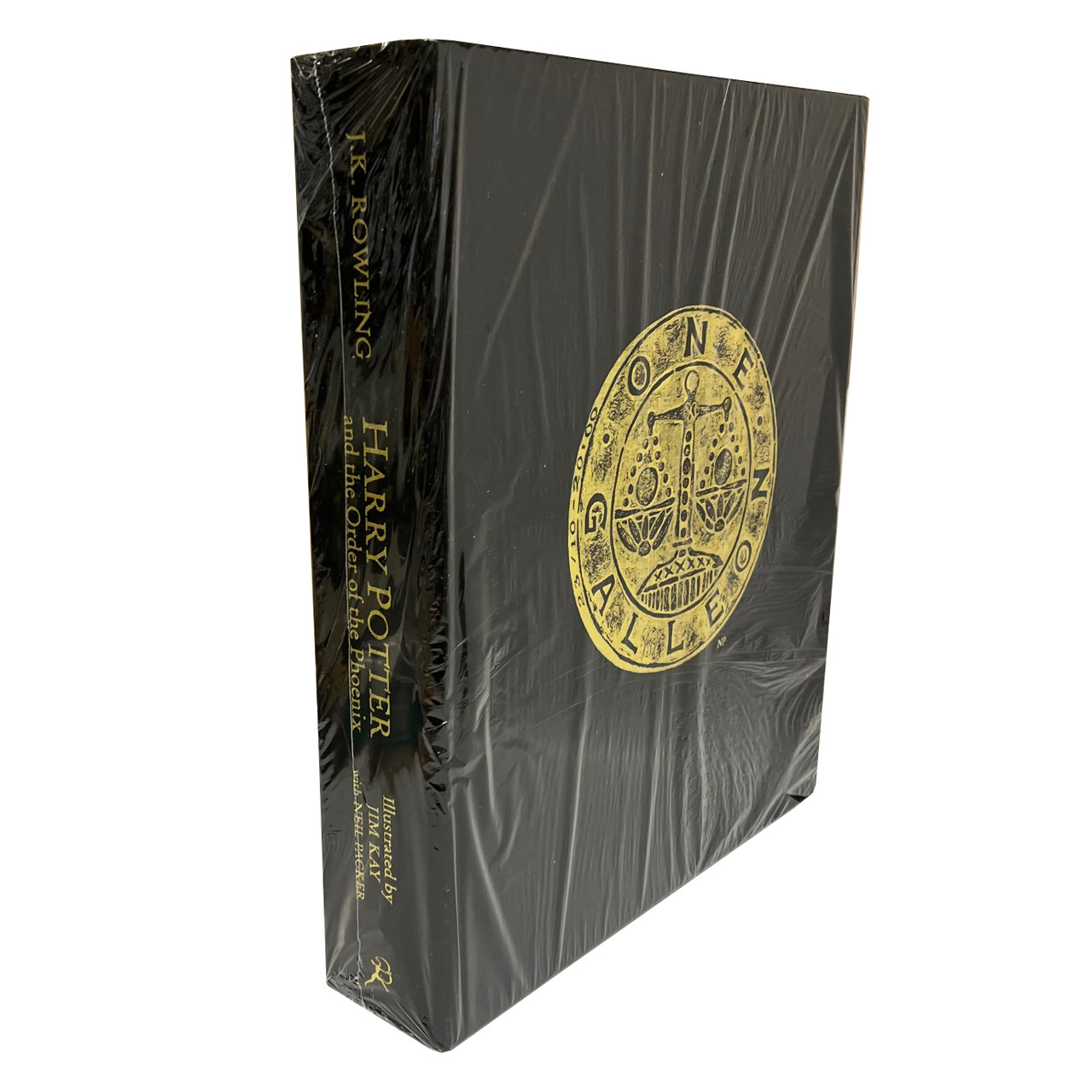 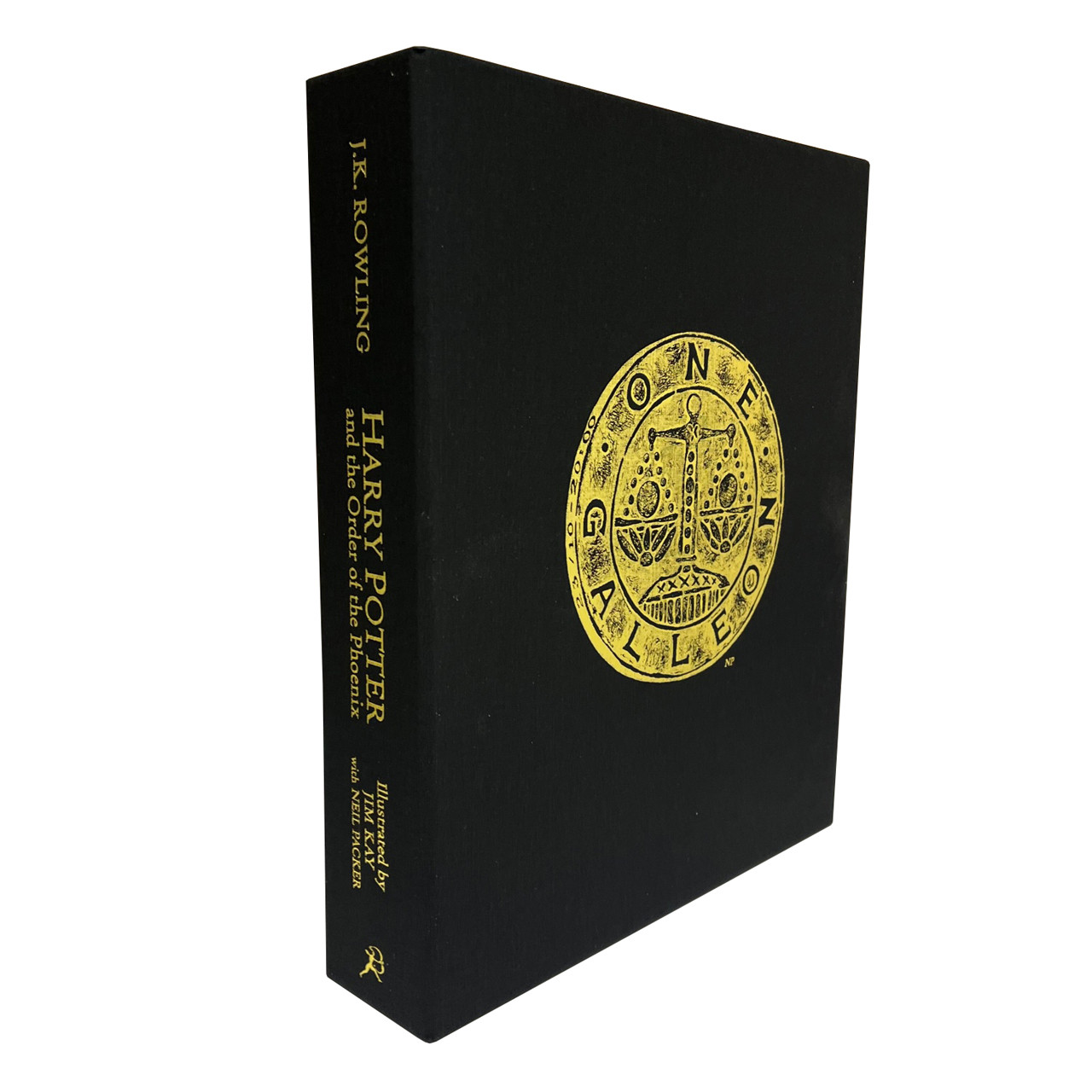 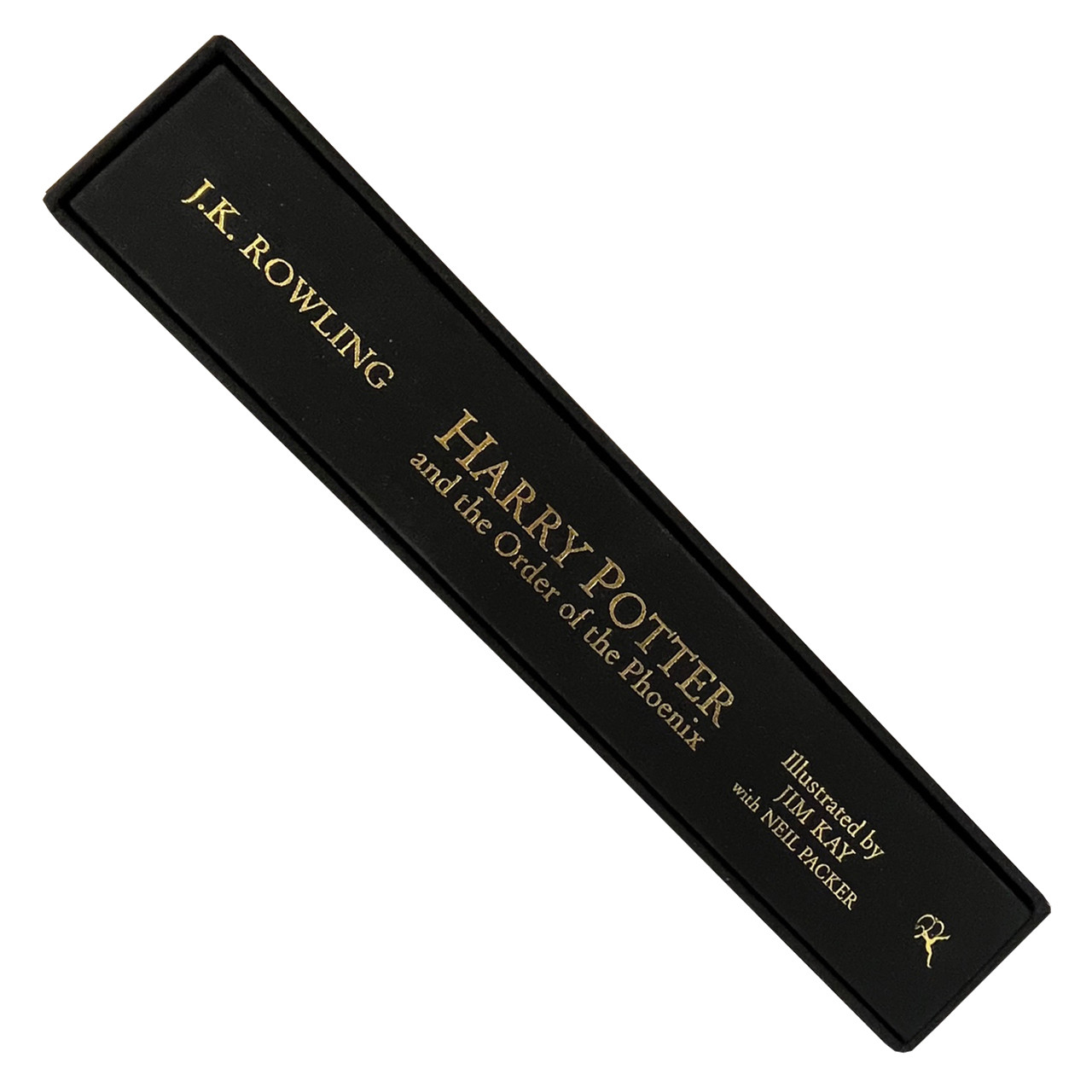 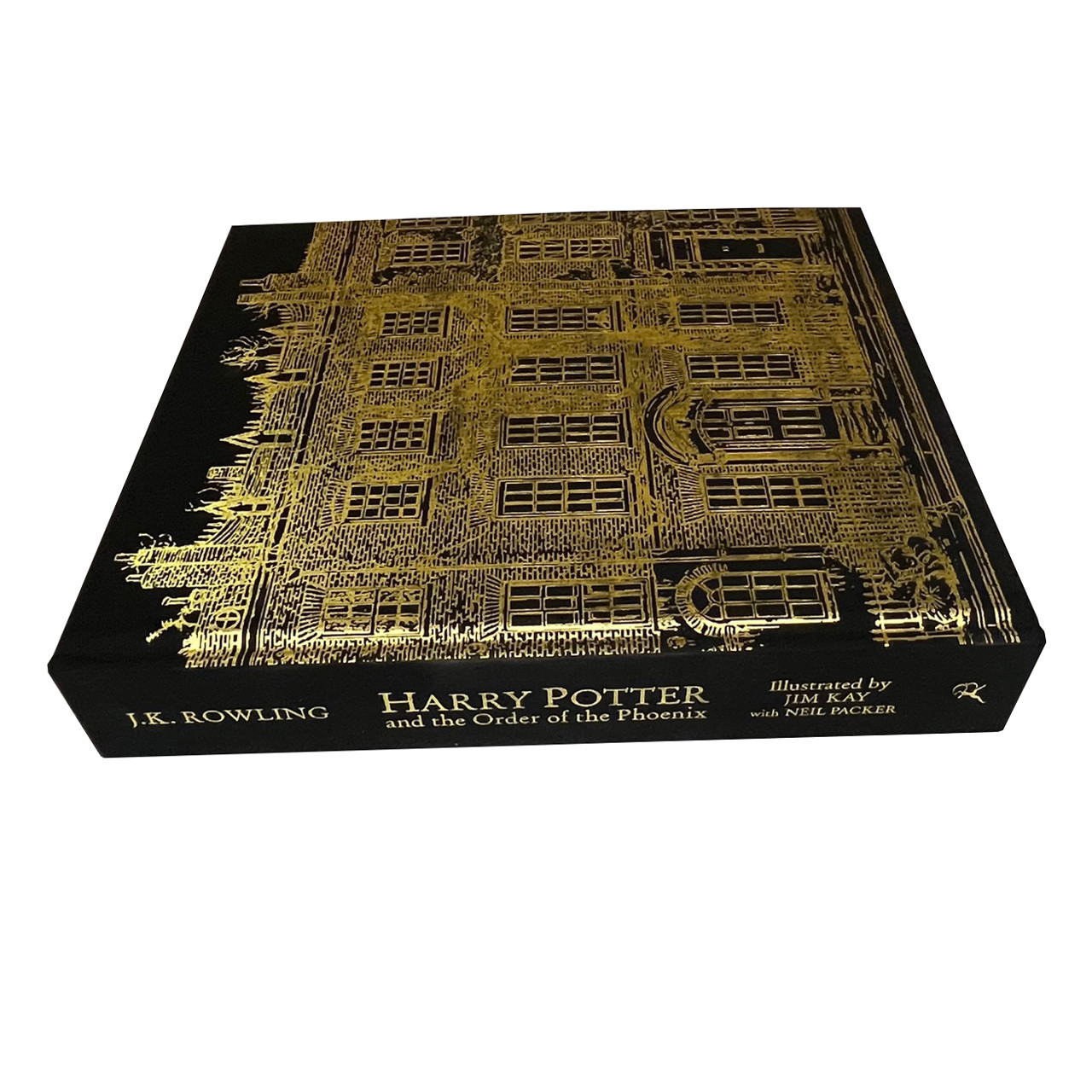 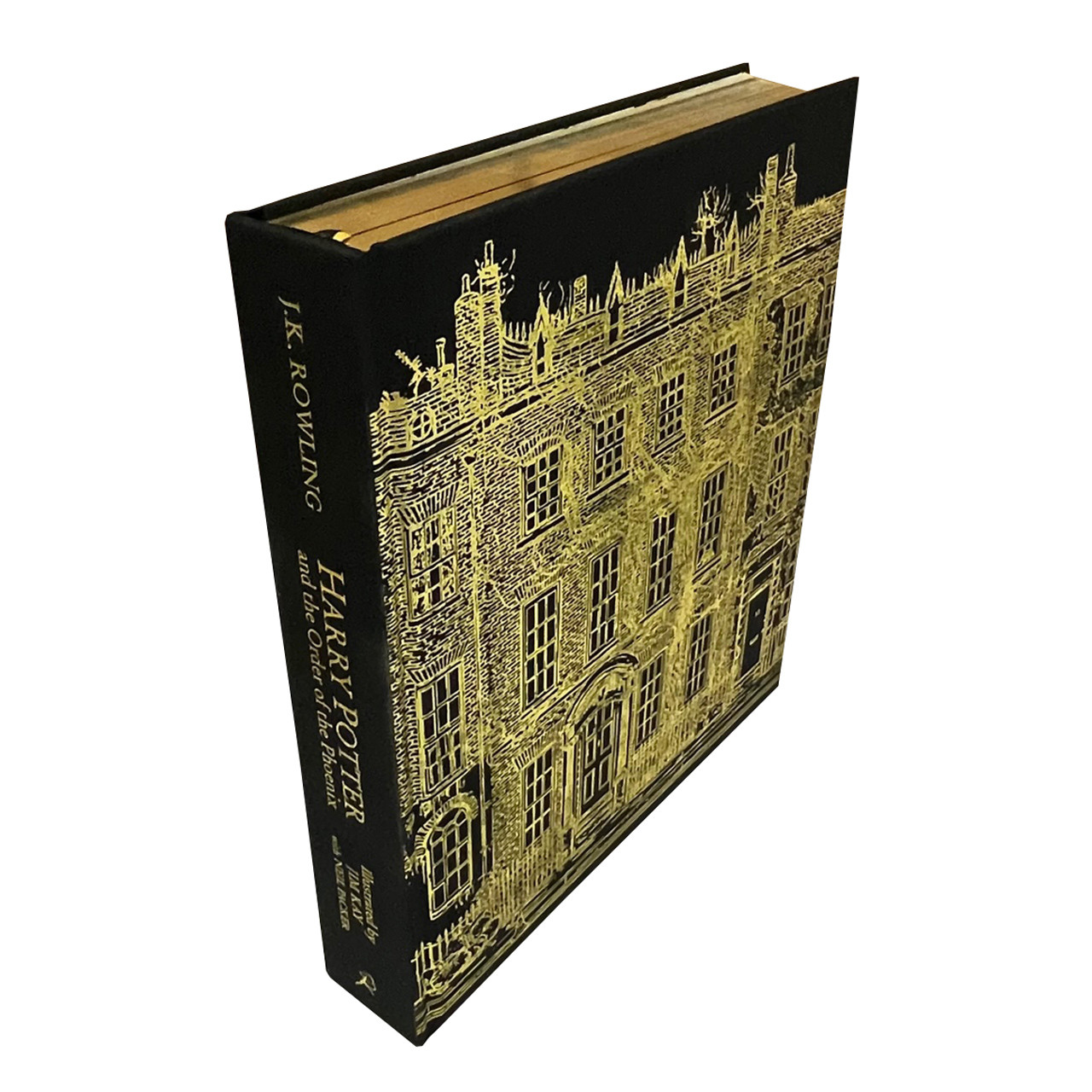 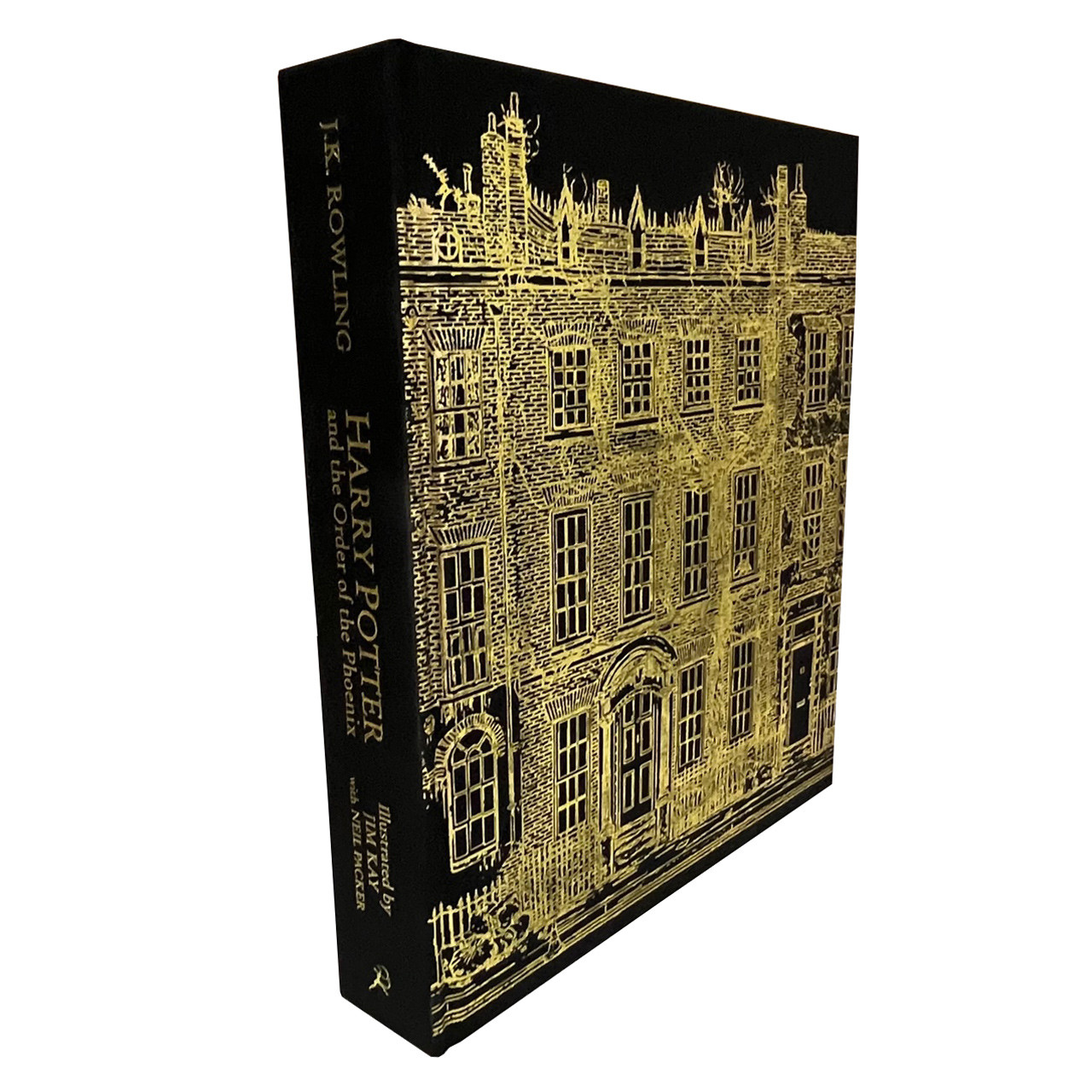 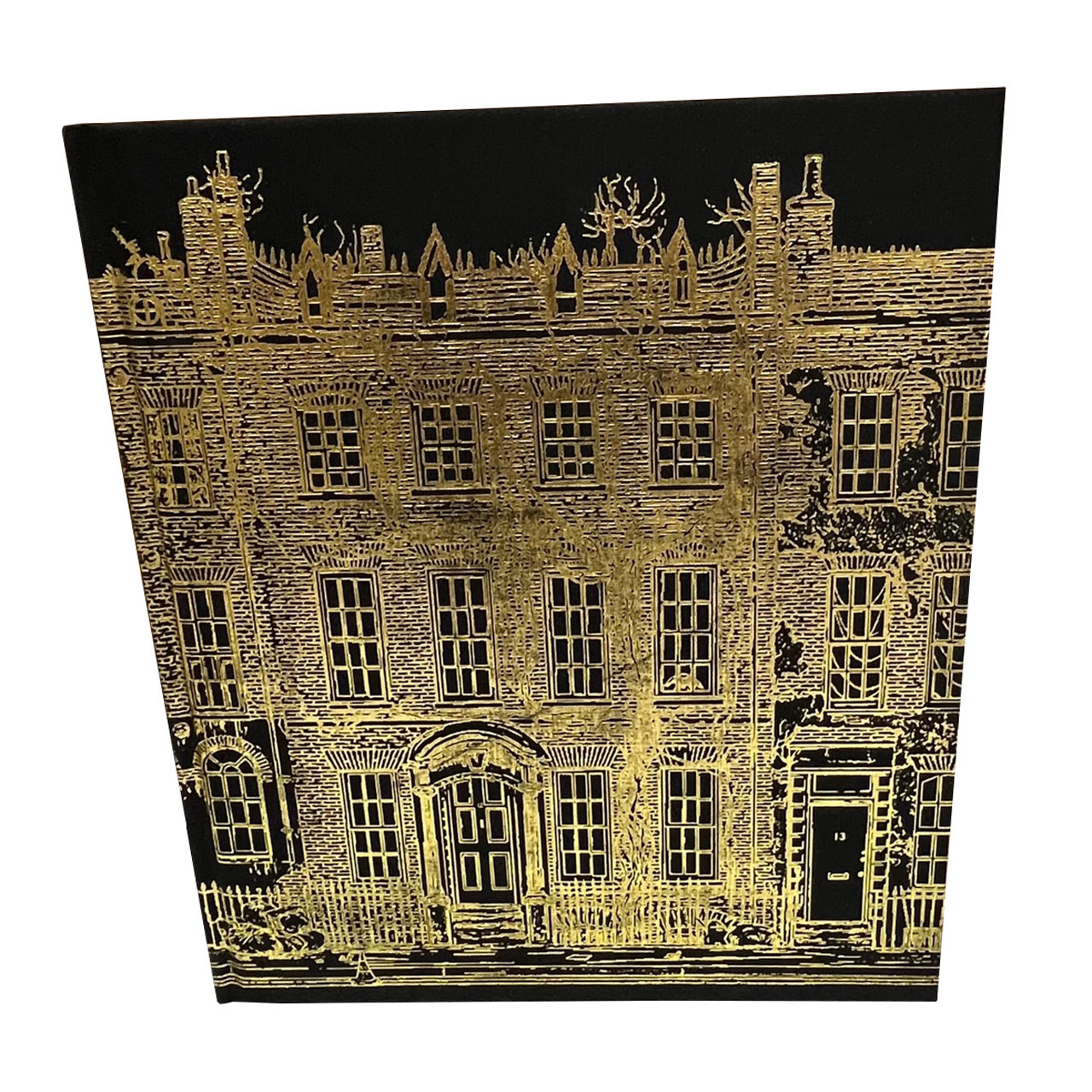 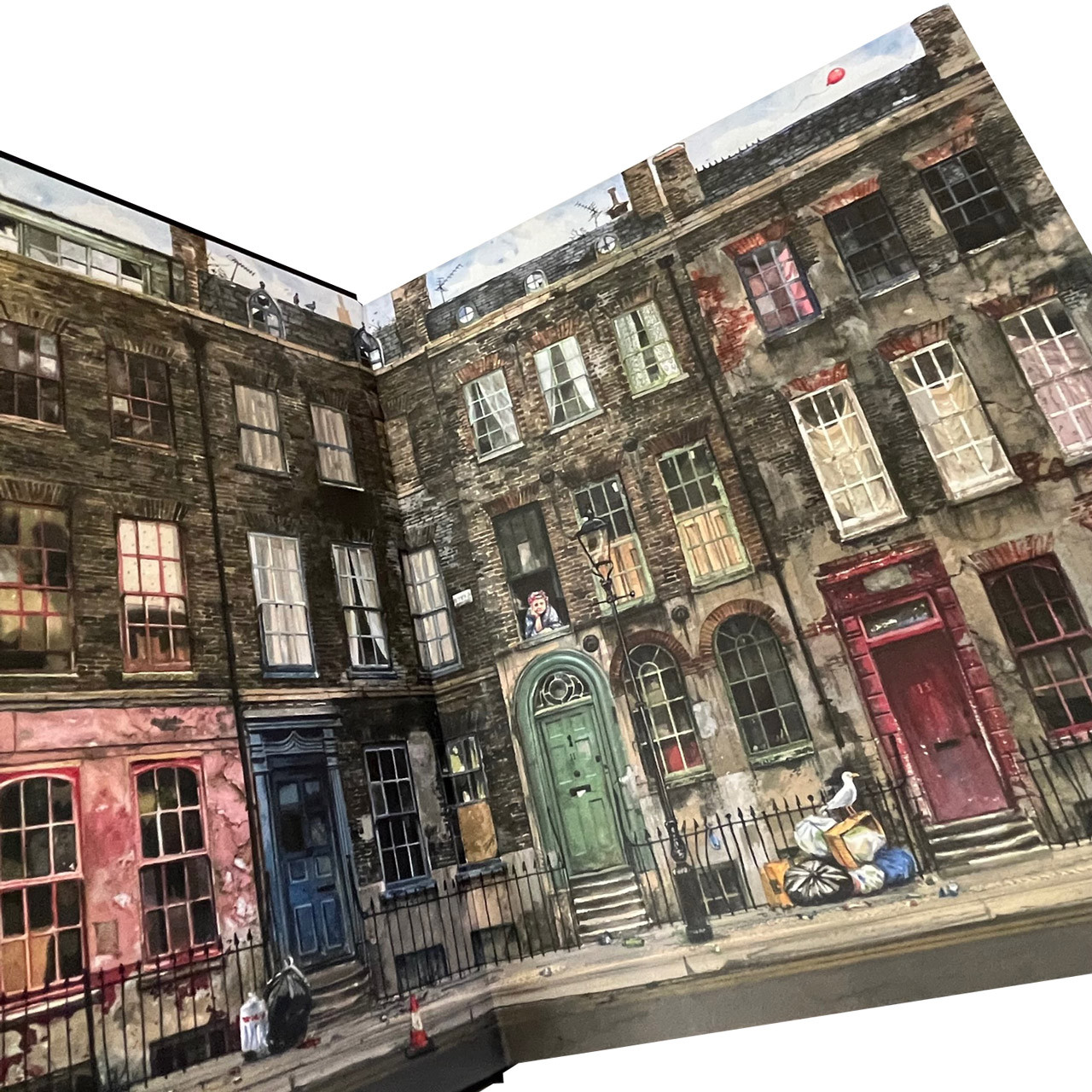 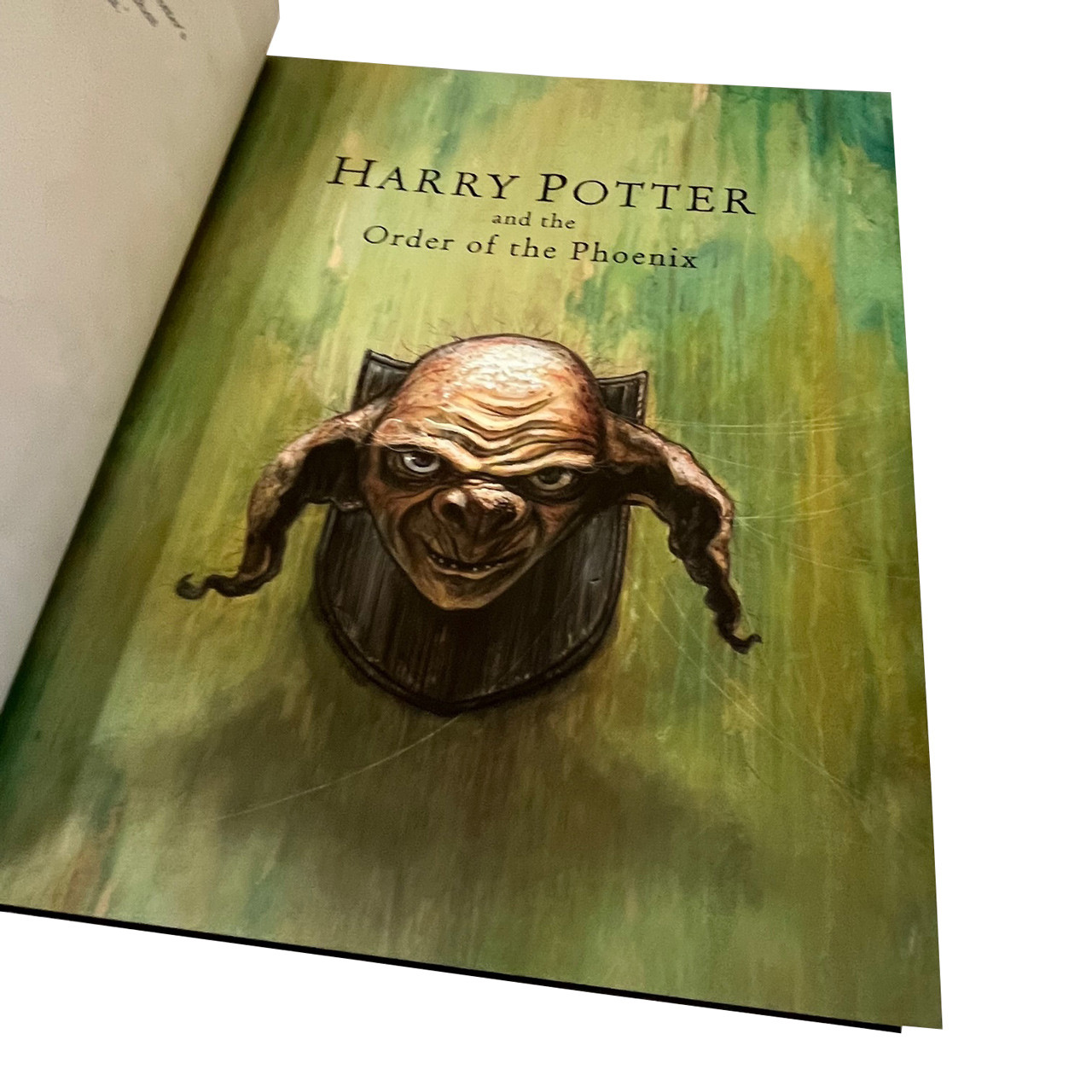 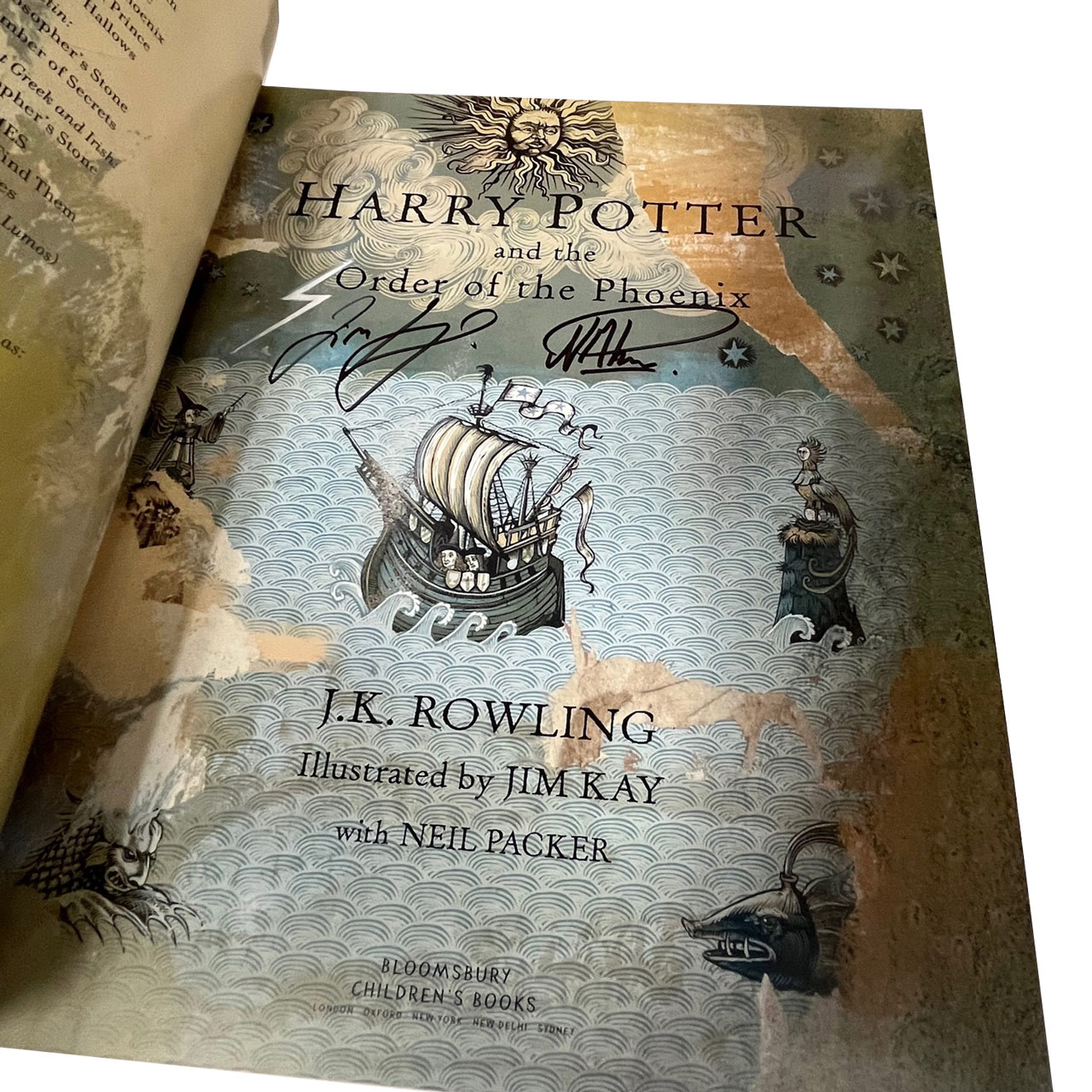 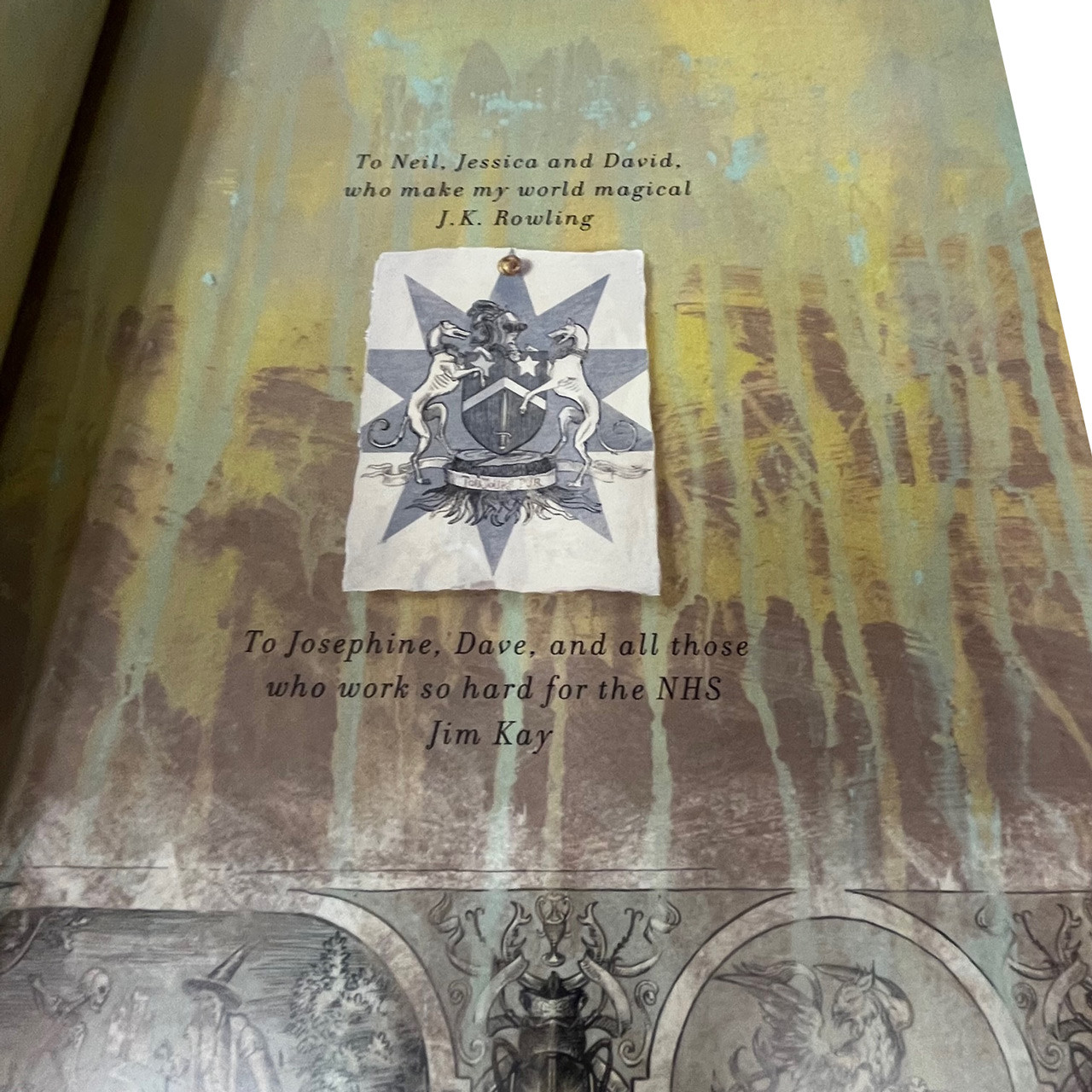 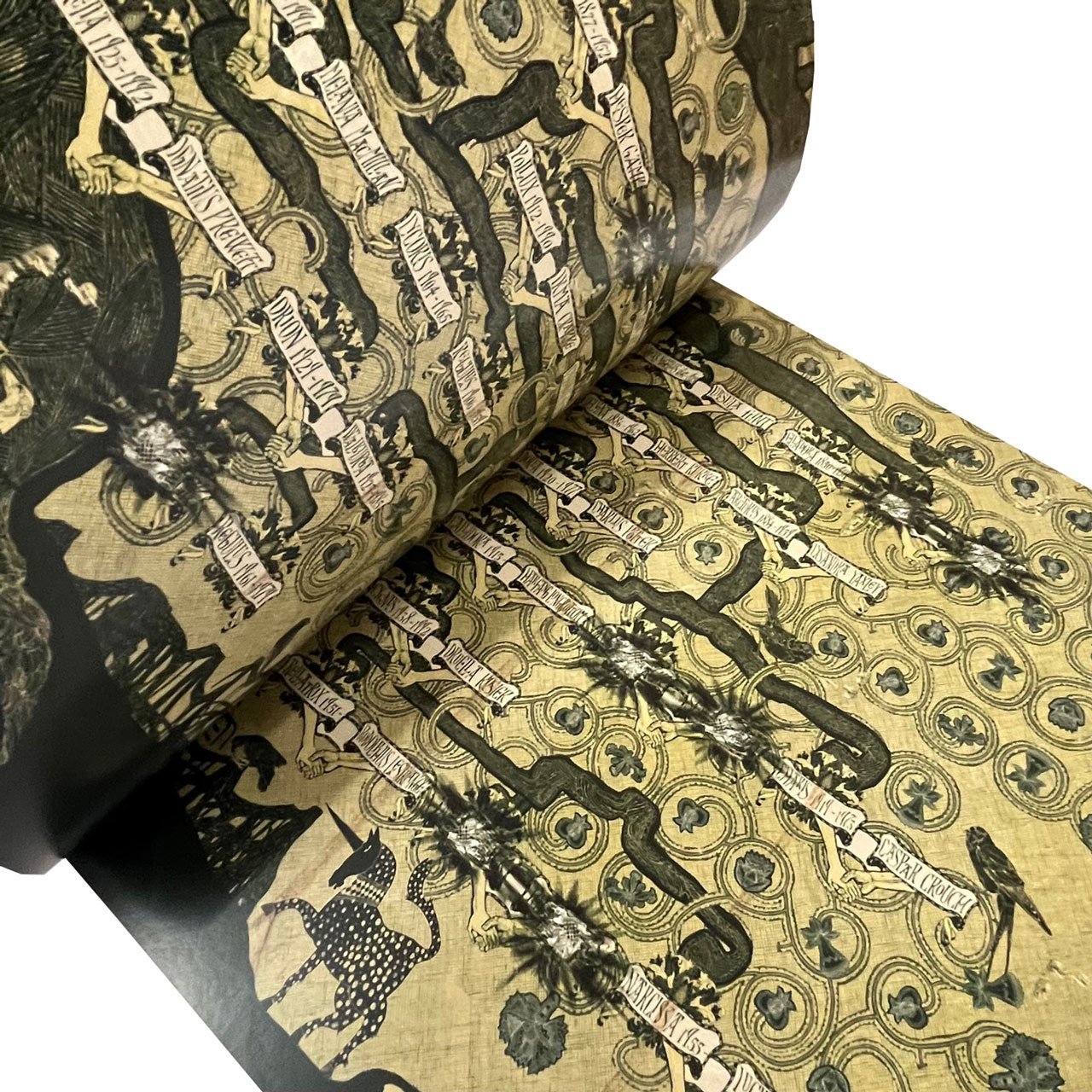 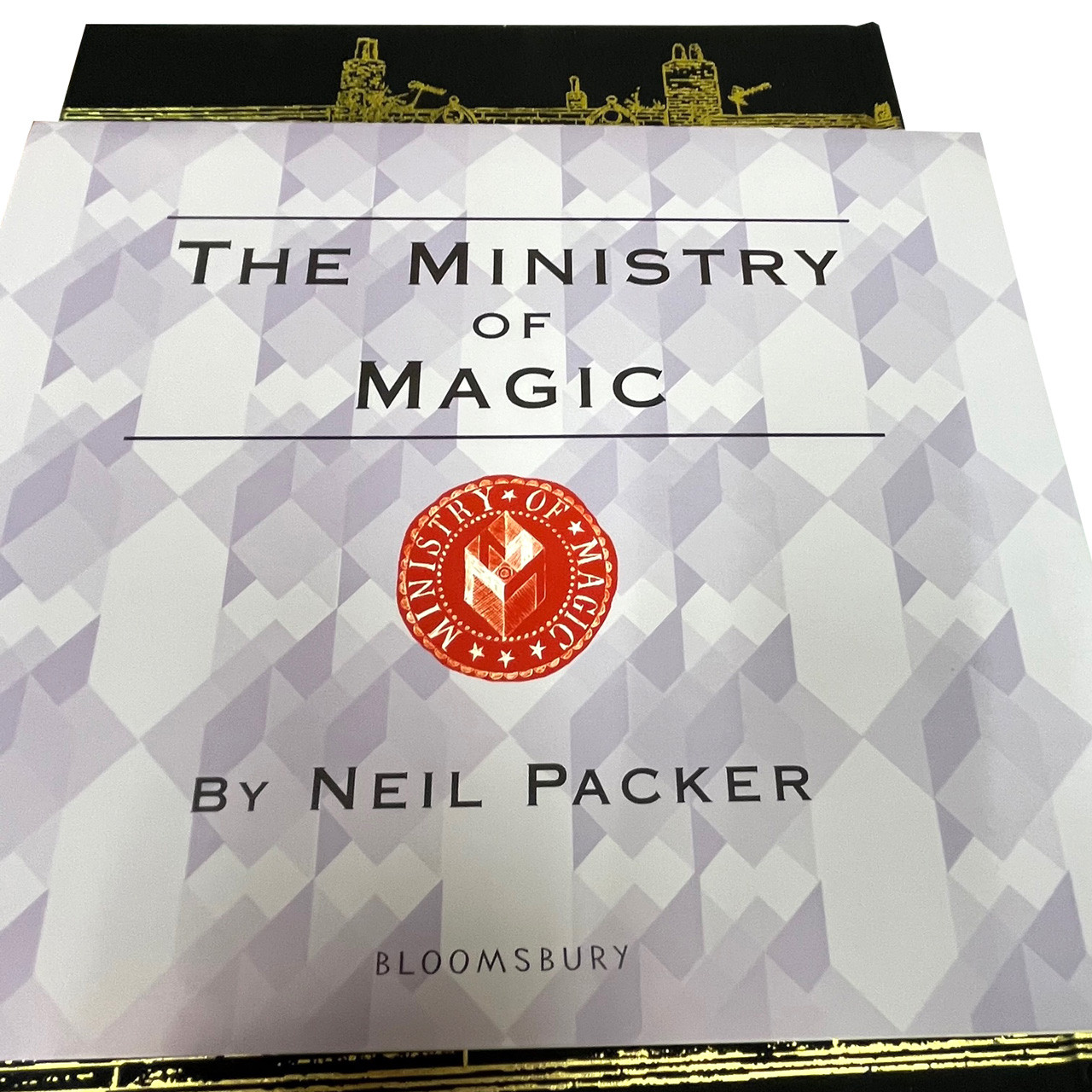 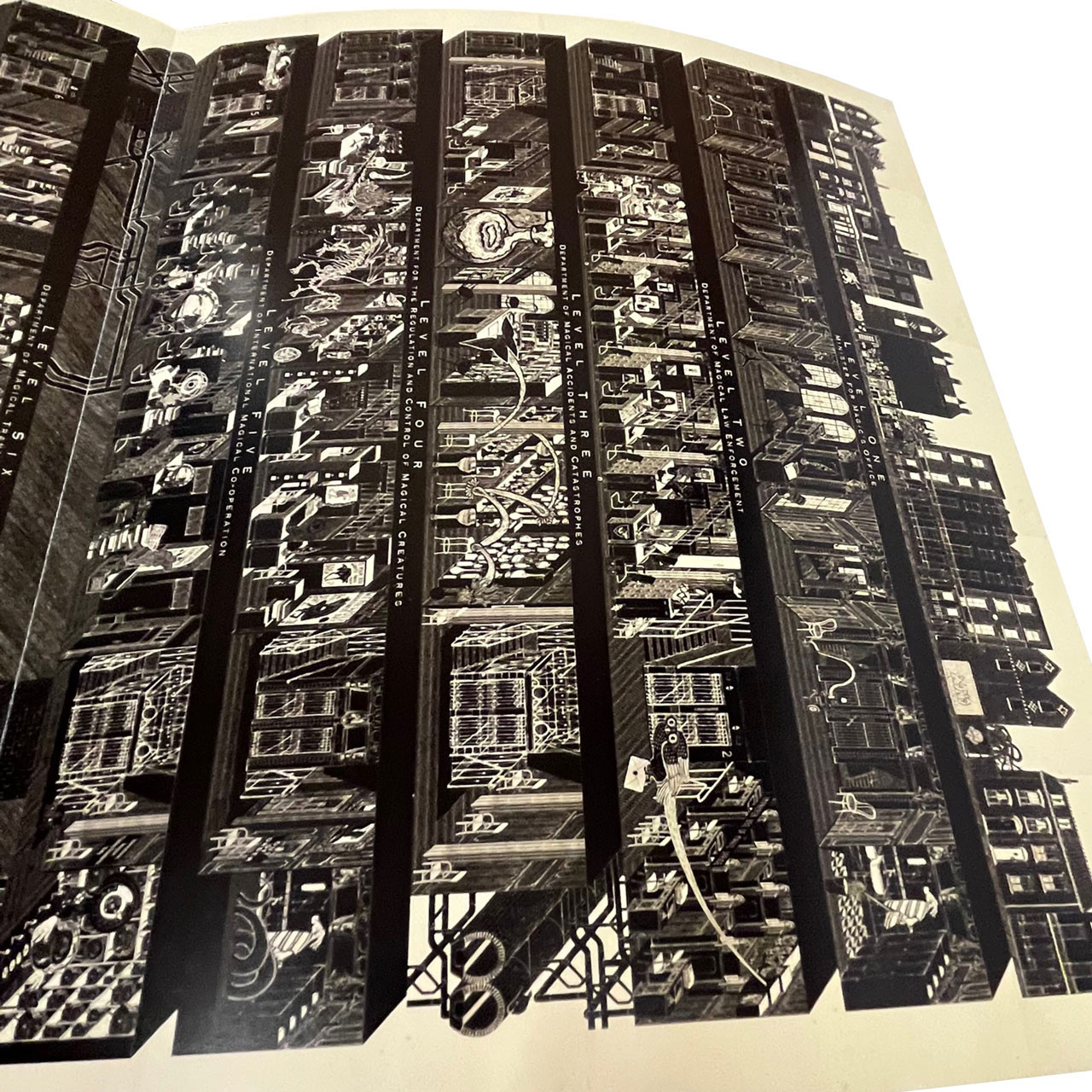 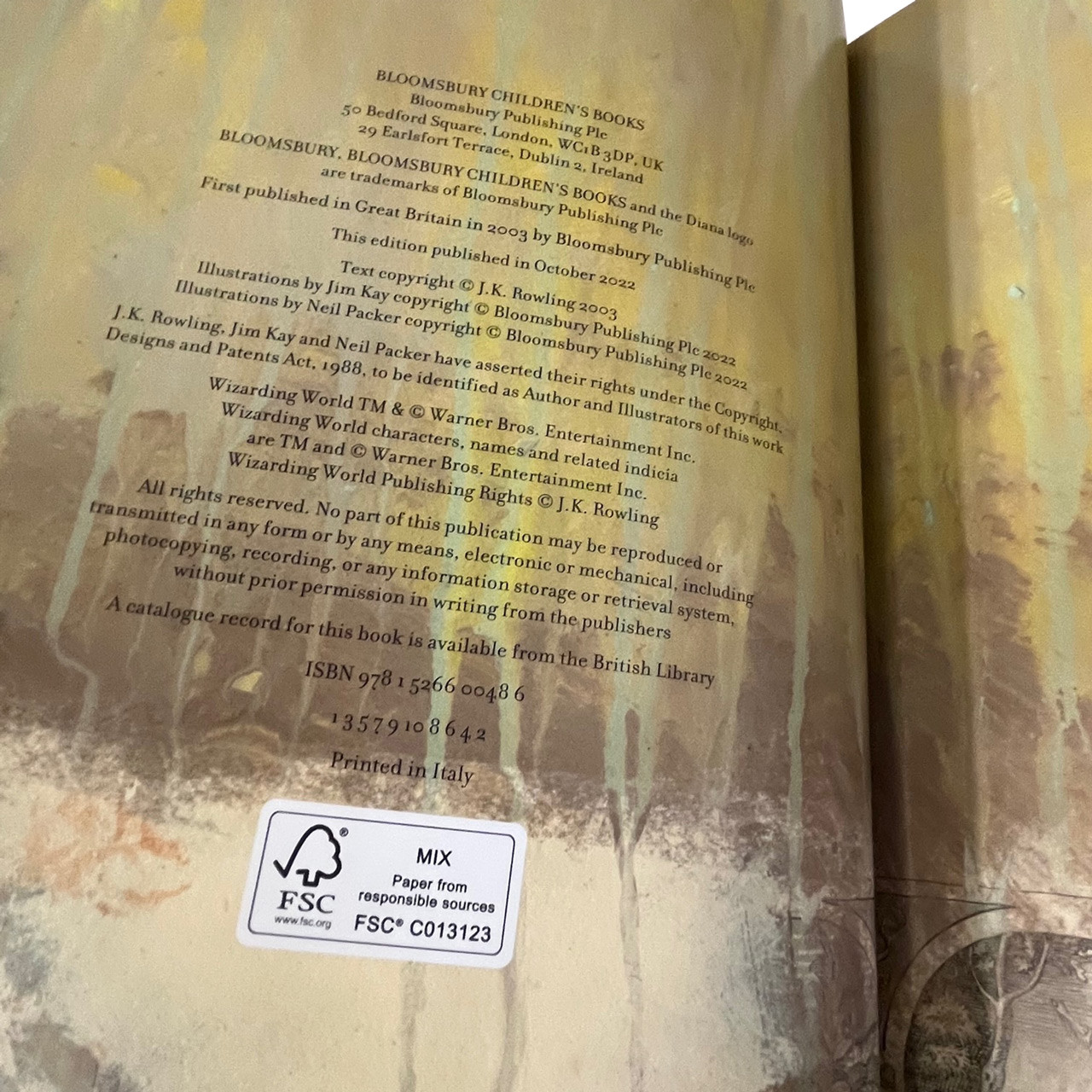 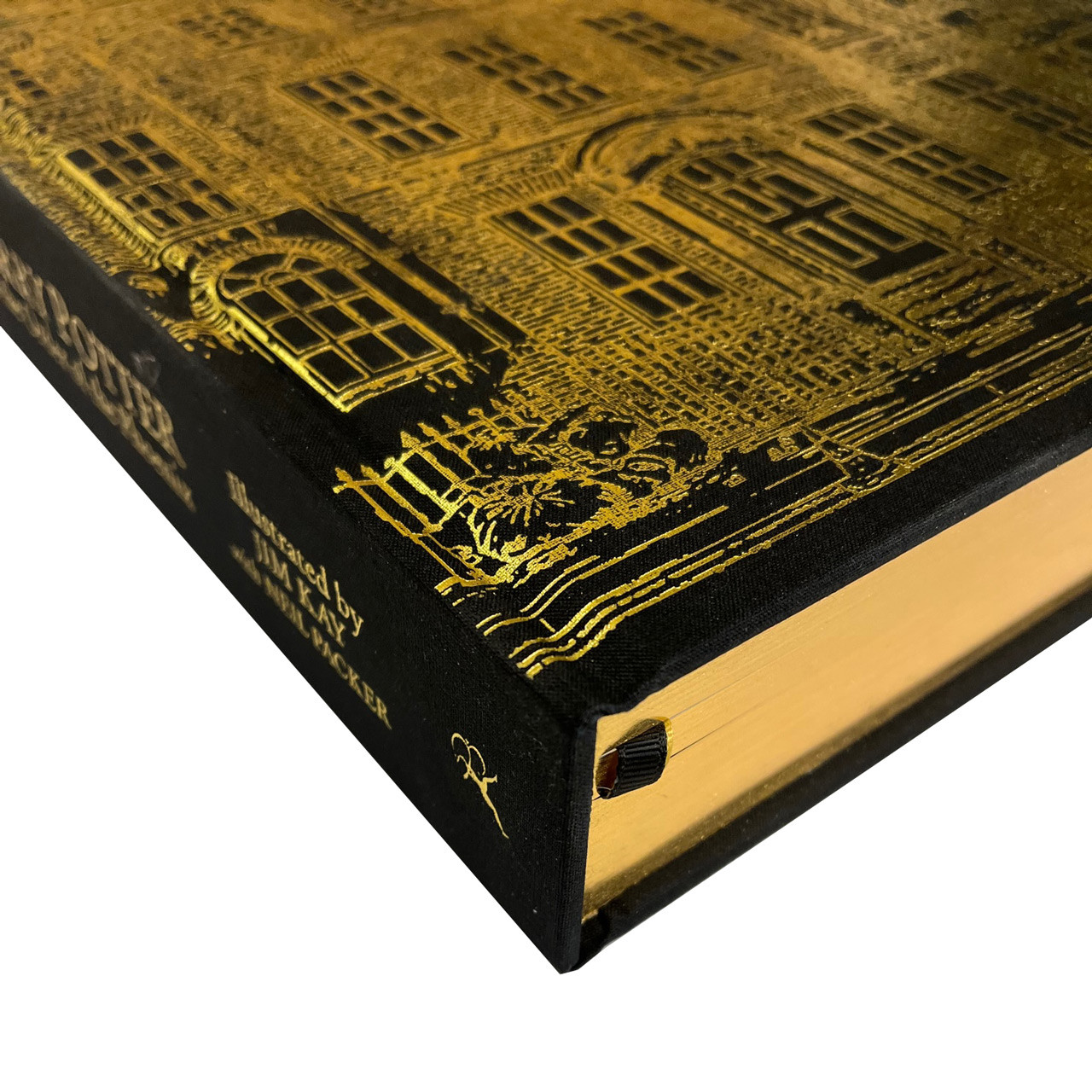 FREE SHIPPING WITHIN THE US. DUE TO THE WEIGHT OF THIS ITEM, UPS GROUND IS ONLY AVAILABLE

Personally signed by both illustrators, Jim Kay and Neil Packer

Bloomsbury Publishing (October 11, 2022). "Harry Potter and the Order of the Phoenix". Slipcased Deluxe Signed Illustrated Edition. UK First Edition, First Printing. Personally signed by both artists Jim Kay and Neil Packer, directly onto the title page of the book. Jim Kay is an English artist from Northhampshire, England, who won the Kate Greenway Medal in 2012 for his illustrations for the book A Monster Calls by Patrick Ness. He was selected personally by J. K. Rowling to present illustrations of every title in the Harry Potter series in technicolour. ISBN 9781408845684. Original packaging by the publisher.

As the Order of the Phoenix keeps watch over Harry Potter, troubled times have come to Hogwarts in a year filled with secrets, subterfuge and suspicion. The deliciously dark fifth instalment of Jim Kay's inspired reimagining of J.K. Rowling's classic series is an epic artistic achievement, featuring over 160 illustrations in an astonishing range of visual styles.

Now an exciting new collaboration brings together two virtuoso artistic talents, as Kate Greenaway Medal winner Jim Kay is joined by acclaimed guest illustrator Neil Packer, winner of the 2021 BolognaRagazzi Award for non-fiction. Prepare to be enchanted once again as Jim Kay depicts J.K. Rowling's wizarding world with the dazzling artistic alchemy fans around the globe have come to know and love, perfectly complemented by Neil Packer's own unique and eclectic illustrations, skilfully woven into the heart of the story.

This is a stunning visual feast of a book, filled with dark magical delights for both fans and new readers alike. Breathtaking scenes, iconic locations and unforgettable characters await inside – Luna Lovegood, Professor Umbridge, Grawp the giant, and many more – as Harry Potter and Dumbledore's Army prepare for the coming battle against Lord Voldemort. Perfect for Potterheads of all ages!

Harry Potter and the Order Of the Phoenix

There is a door at the end of a silent corridor. And it's haunting Harry Potter's dreams. Why else would he be waking in the middle of the night, screaming in terror? It's not just the upcoming O.W.L. exams; a new teacher with a personality like poisoned honey; a venomous, disgruntled house-elf; or even the growing threat of He-Who-Must-Not-Be-Named. Now Harry Potter is faced with the unreliability of the very government of the magical world and the impotence of the authorities at Hogwarts. Despite this (or perhaps because of it), he finds depth and strength in his friends, beyond what even he knew; boundless loyalty; and unbearable sacrifice.

This stunning illustrated edition brings together the talents of award-winning artists Jim Kay and Neil Packer in a visual feast, featuring iconic scenes and much loved characters -- Tonks, Luna Lovegood, and many more -- as the Order of the Phoenix keeps watch over Harry Potter’s fifth year at Hogwarts. With its oversized format, high-quality paper, ribbon bookmark, and color on nearly every page, this edition is the perfect gift for Harry Potter fans and book lovers of all ages.

J.K. Rowling is the author of the record-breaking, multi-award-winning Harry Potter novels. Loved by fans around the world, the series has sold more than 500 million copies, been translated into 80 languages and made into eight blockbuster films.

J.K. Rowling also writes crime novels under the pseudonym Robert Galbraith, featuring private detective Cormoran Strike. The first four novels The Cuckoo's Calling (2013), The Silkworm (2014), Career of Evil (2015) and Lethal White (2018) all topped the national and international bestseller lists. The first three have been adapted for television, produced by Brontë Film and Television.

Joanne Rowling, also known by her pen name J. K. Rowling, is a British author and philanthropist. She wrote Harry Potter, a seven-volume children's fantasy series published from 1997 to 2007. The series has sold over 500 million copies, been translated into at least 70 languages, and spawned a global media franchise including films and video games. The Casual Vacancy (2012) was her first novel for adults. She writes Cormoran Strike, an ongoing crime fiction series, as Robert Galbraith.

Born in Yate, Gloucestershire, Rowling was working as a researcher and bilingual secretary for Amnesty International in 1990 when she conceived the idea for the Harry Potter series while on a delayed train from Manchester to London. The seven-year period that followed saw the death of her mother, birth of her first child, divorce from her first husband, and relative poverty until the first novel in the series, Harry Potter and the Philosopher's Stone, was published in 1997. There were six sequels, of which the last was released in 2007. By 2008, Forbes had named her the world's highest-paid author.

Rowling concluded the Harry Potter series with Harry Potter and the Deathly Hallows (2007). The novels follow a boy called Harry Potter as he attends Hogwarts, a school for wizards, and battles Lord Voldemort. Death and the divide between good and evil are the central themes of the series. Its influences include: Bildungsroman (the coming-of-age genre), school stories, fairy tales, and Christian allegory. The series revived fantasy as a genre in the children's market, spawned a host of imitators, and inspired an active fandom. Critical reception has been more mixed. Many reviewers see Rowling's writing as conventional; some regard her portrayal of gender and social division as regressive. There were also religious debates over Harry Potter.

Rowling has won many accolades for her work. She has received an OBE and made a Companion of Honour for services to literature and philanthropy. Harry Potter brought her wealth and recognition that she has used to advance philanthropic endeavours and political causes. She co-founded the charity Lumos and established the Volant Charitable Trust, named after her mother. Rowling's charitable giving centres on medical causes and supporting at-risk women and children. In politics, she has donated to Britain's Labour Party and opposed Scottish independence and Brexit. Since late 2019, she has publicly expressed her opinions on transgender people and related civil rights. These have been criticised as transphobic by LGBT rights organisations and some feminists, but have received support from other feminists and individuals. 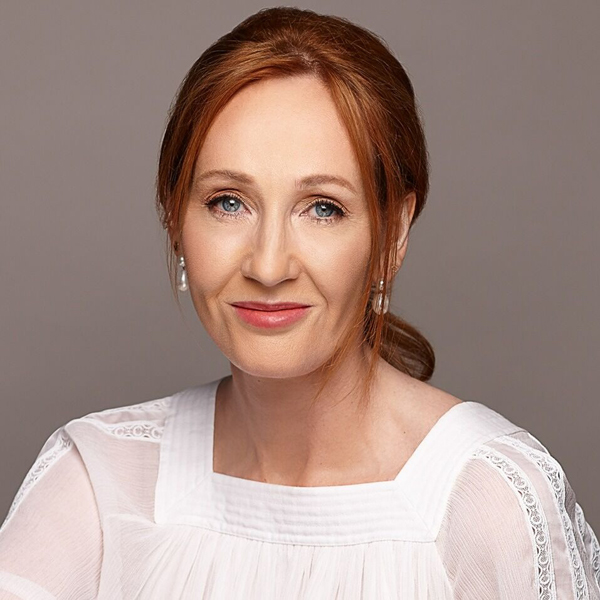 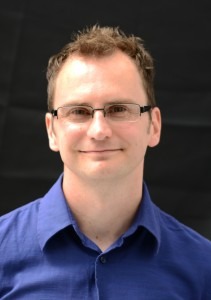 Neil Packer is an English artist who worked with Jim Kay to produce illustrations for Harry Potter and the Order of the Phoenix: Illustrated Edition.

In the 1970s, Packer attended Colchester School of Art. Packer has been an illustrator since 1984, when he created illustrations for a children's book called The Rest of the Day Is Your Own. In addition to books, he has illustrated for packaging and advertising. He has worked for the Folio Society, producing illustrations for the likes of Catch 22 and One Hundred Years of Solitude. In 2013 he published The Odyssey, and The Iliad in 2015. He lives and works in London.

Packer is a good friend of Jim Kay. In 2022, it was announced that Packer had worked with Kay to produce Harry Potter and the Order of the Phoenix: Illustrated Edition, which Kay had found particularly difficult. Kay thought it "was a privilege to have Neil Packer helping with this daunting task" and that he "is perfect for Potter". Packer created about a quarter of the imagery, including magical artefacts and locations in this illustrated edition, including a cutaway of the Ministry of Magic, Firenze's Divination classroom, along with other magical artefacts and favourite locations from the wizarding world. 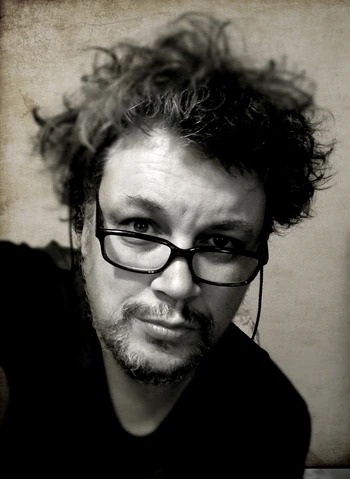 VERY FINE GUARANTEED. As New as if normally shipped by the publisher. A wonderful bright clean copy free of any markings, writings, or stamps. Sharp corners that have not been bumped. Unread book. No bookplates attached or indication of any removed.

"Both a wise and delightful addition to the Harry Potter canon, this new translation of The Tales of Beedle the Bard is all that fans could hope for and more--and an essential volume for the...