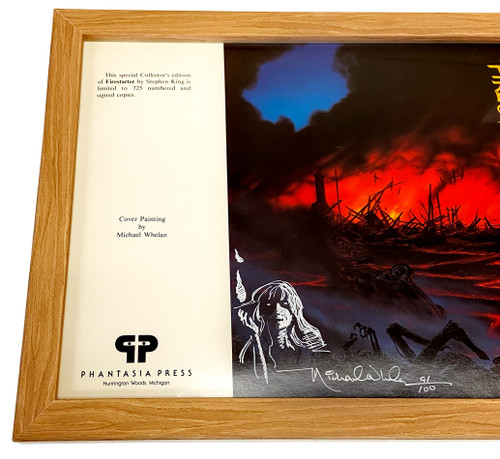 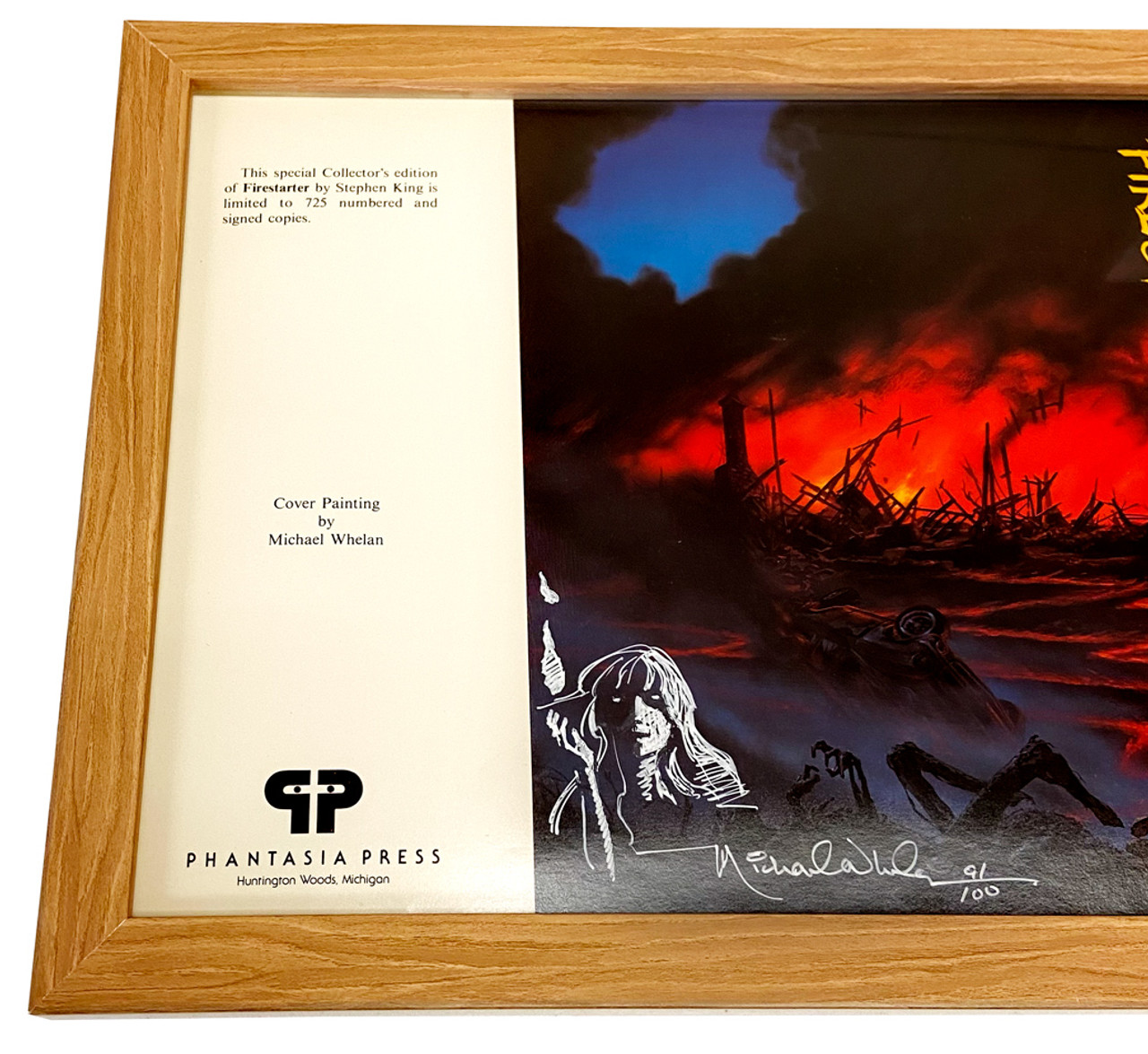 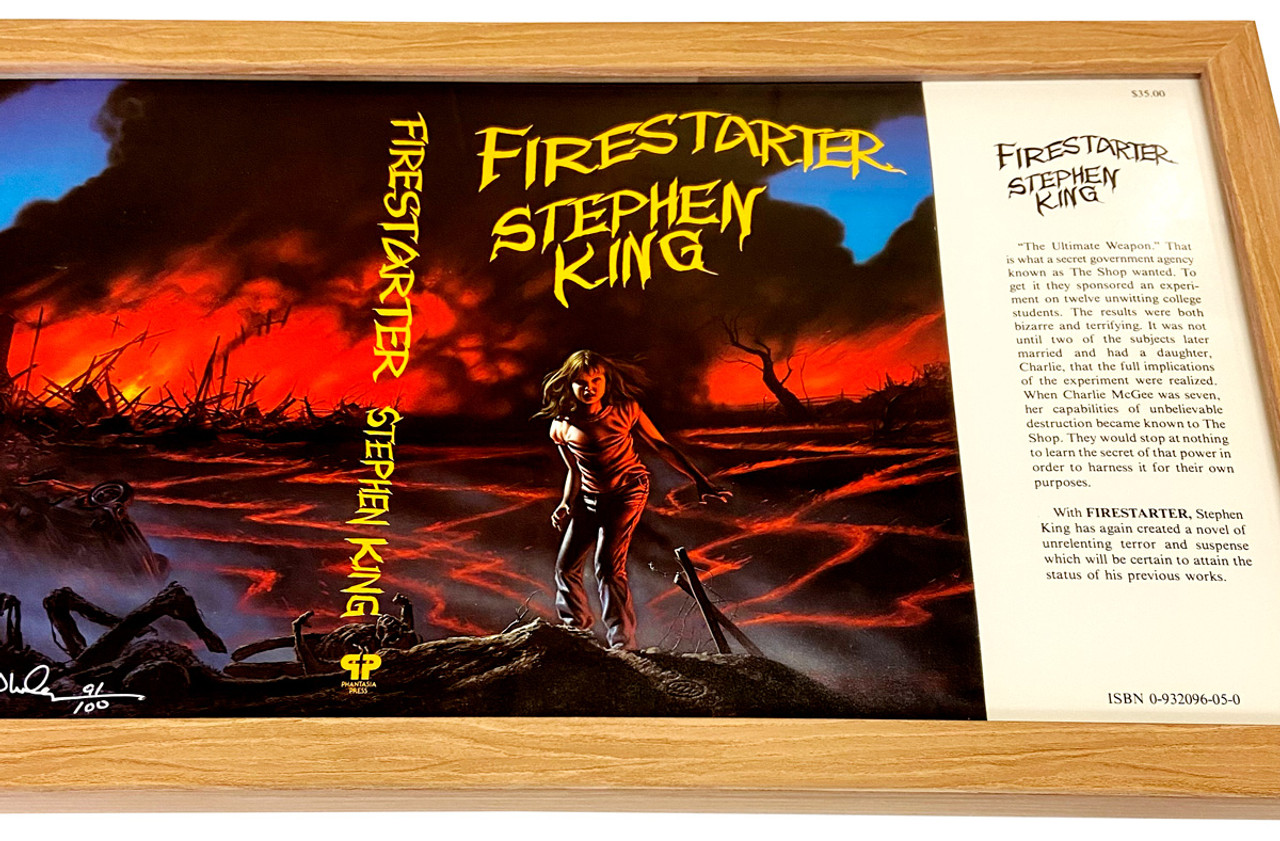 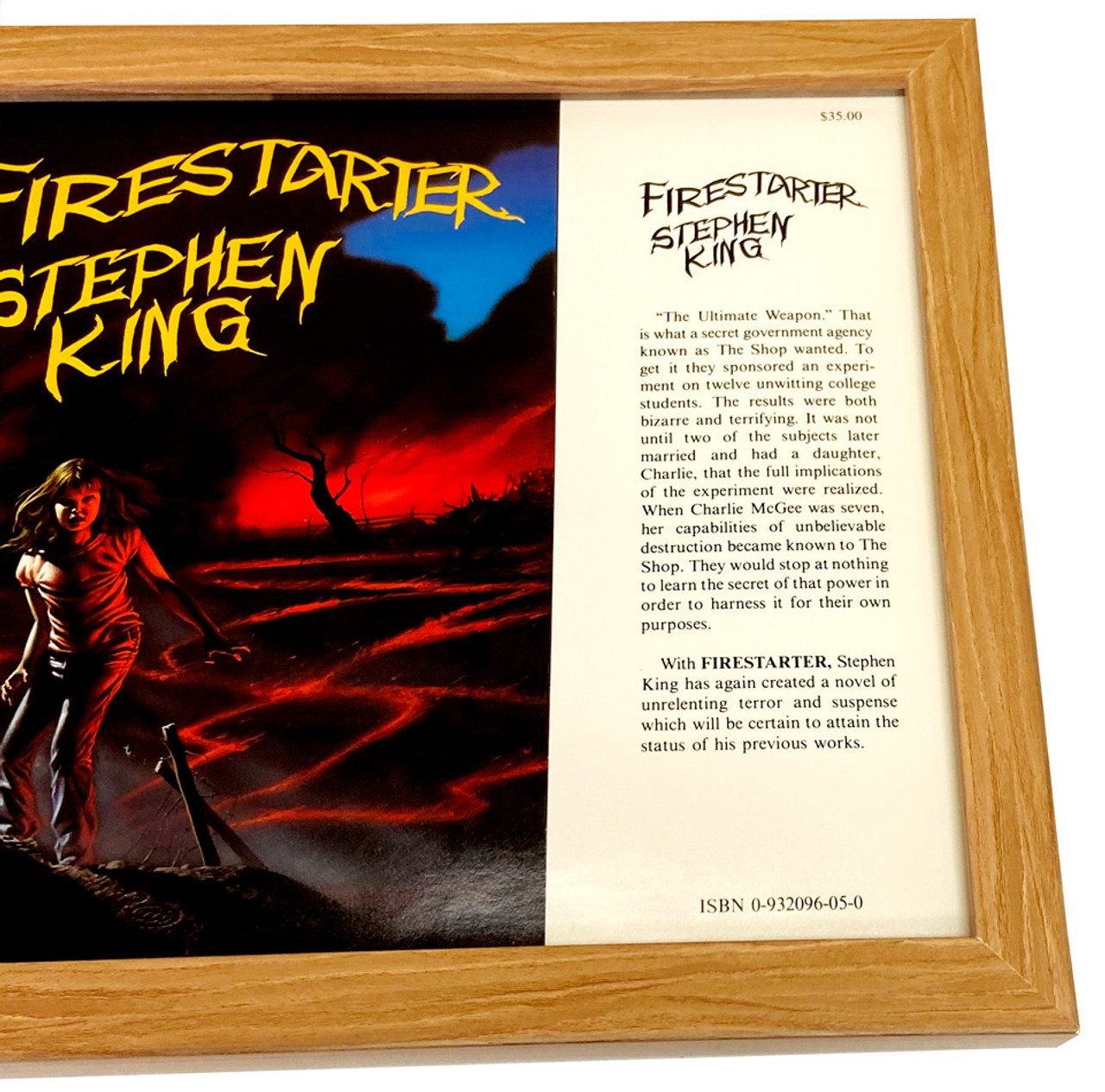 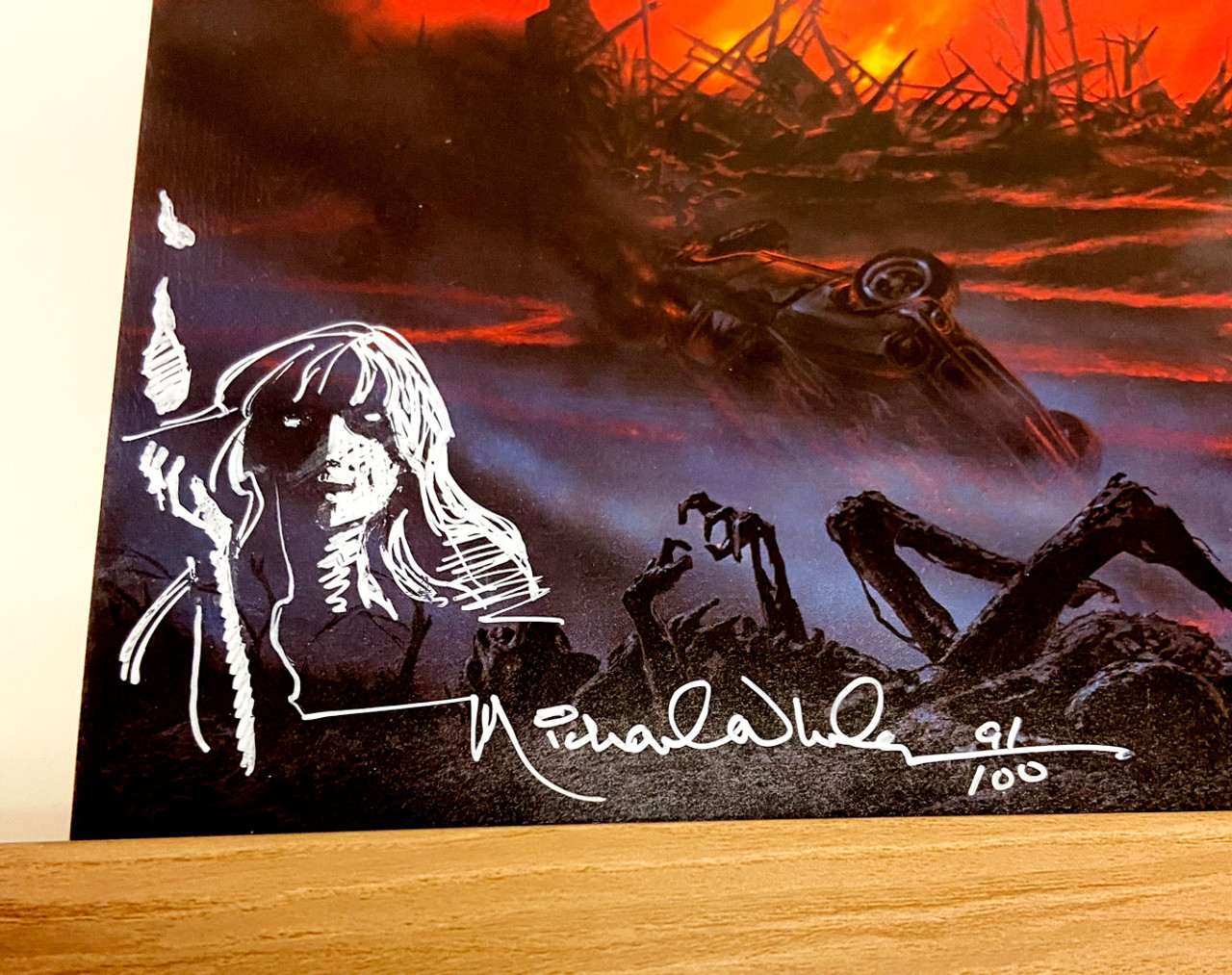 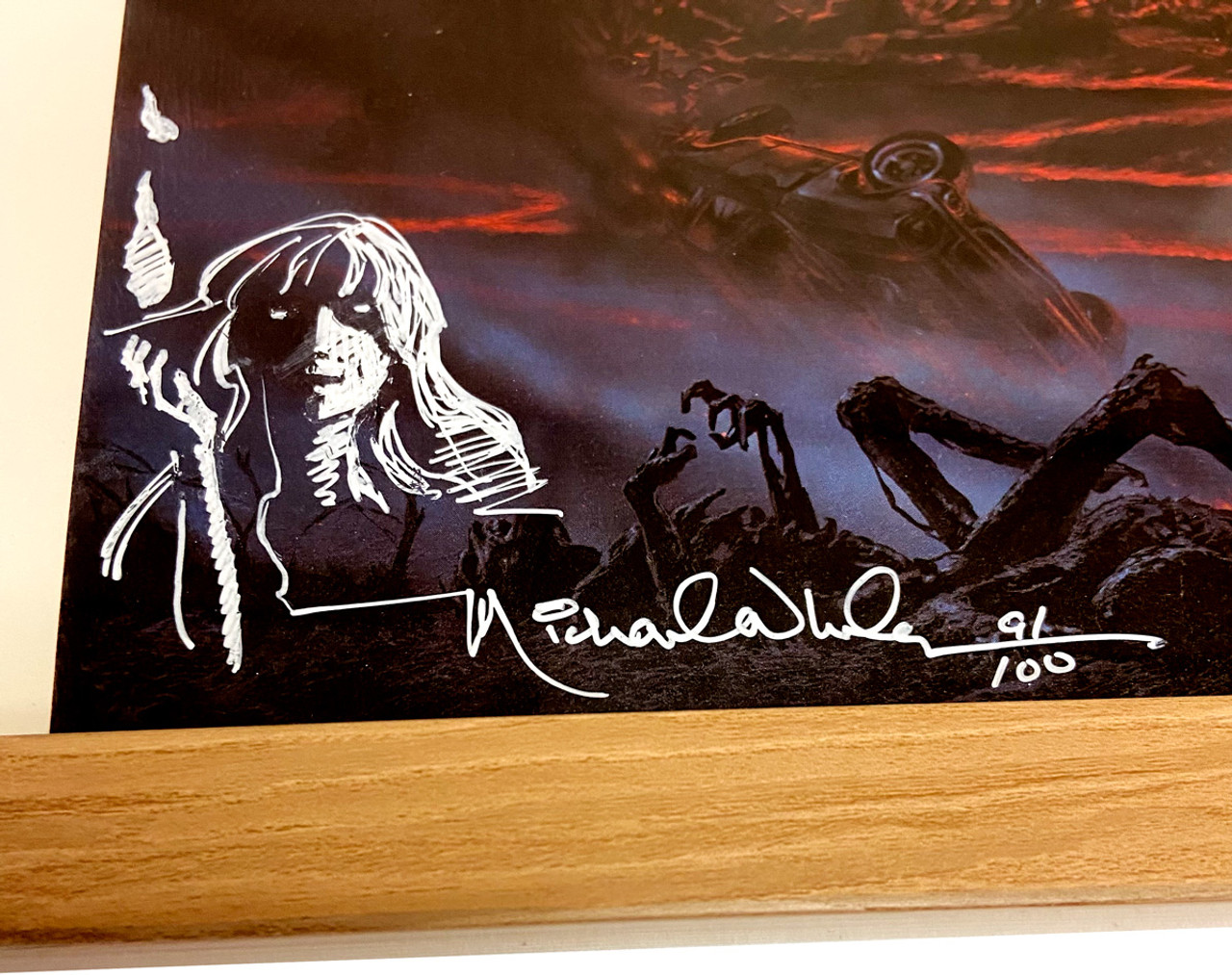 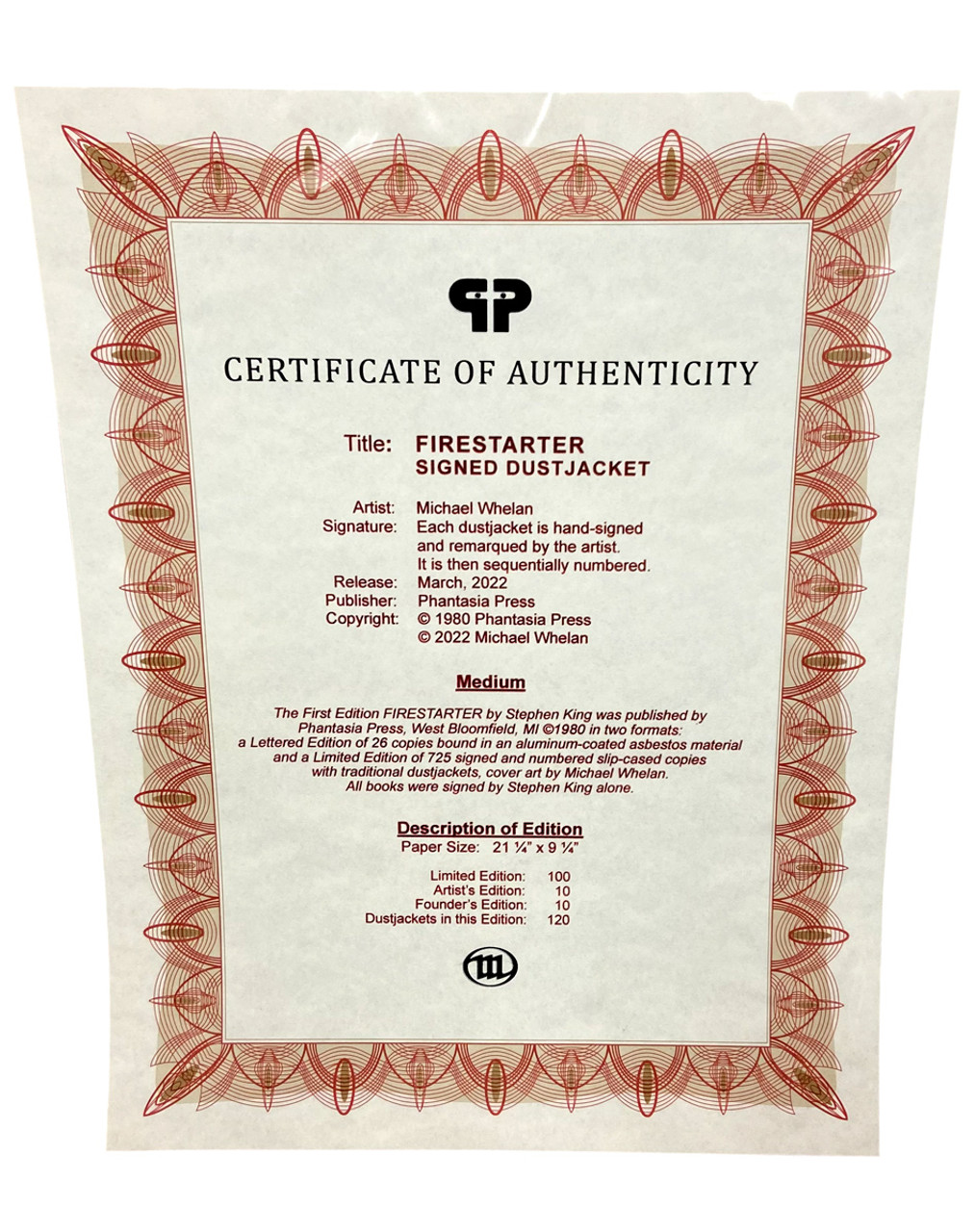 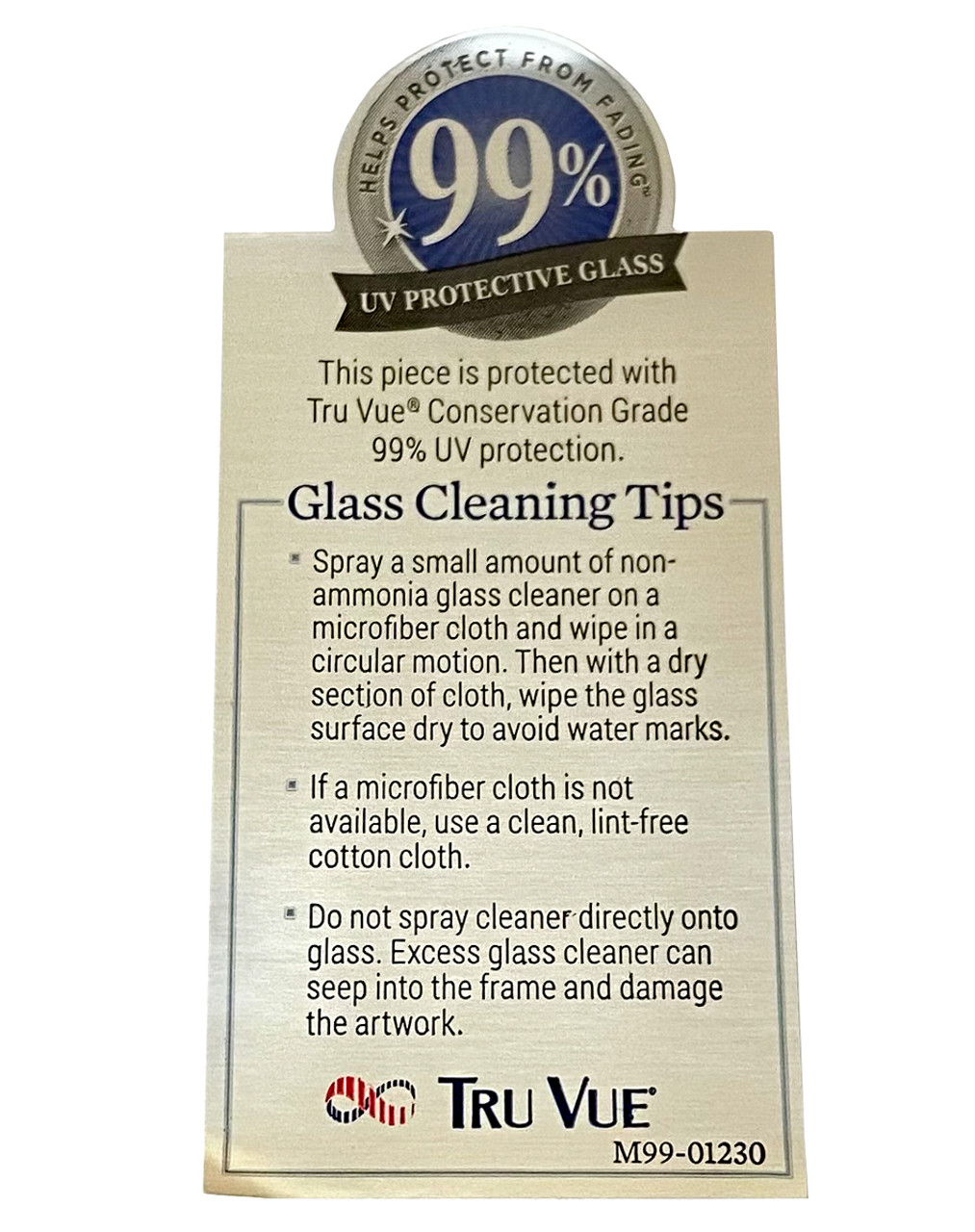 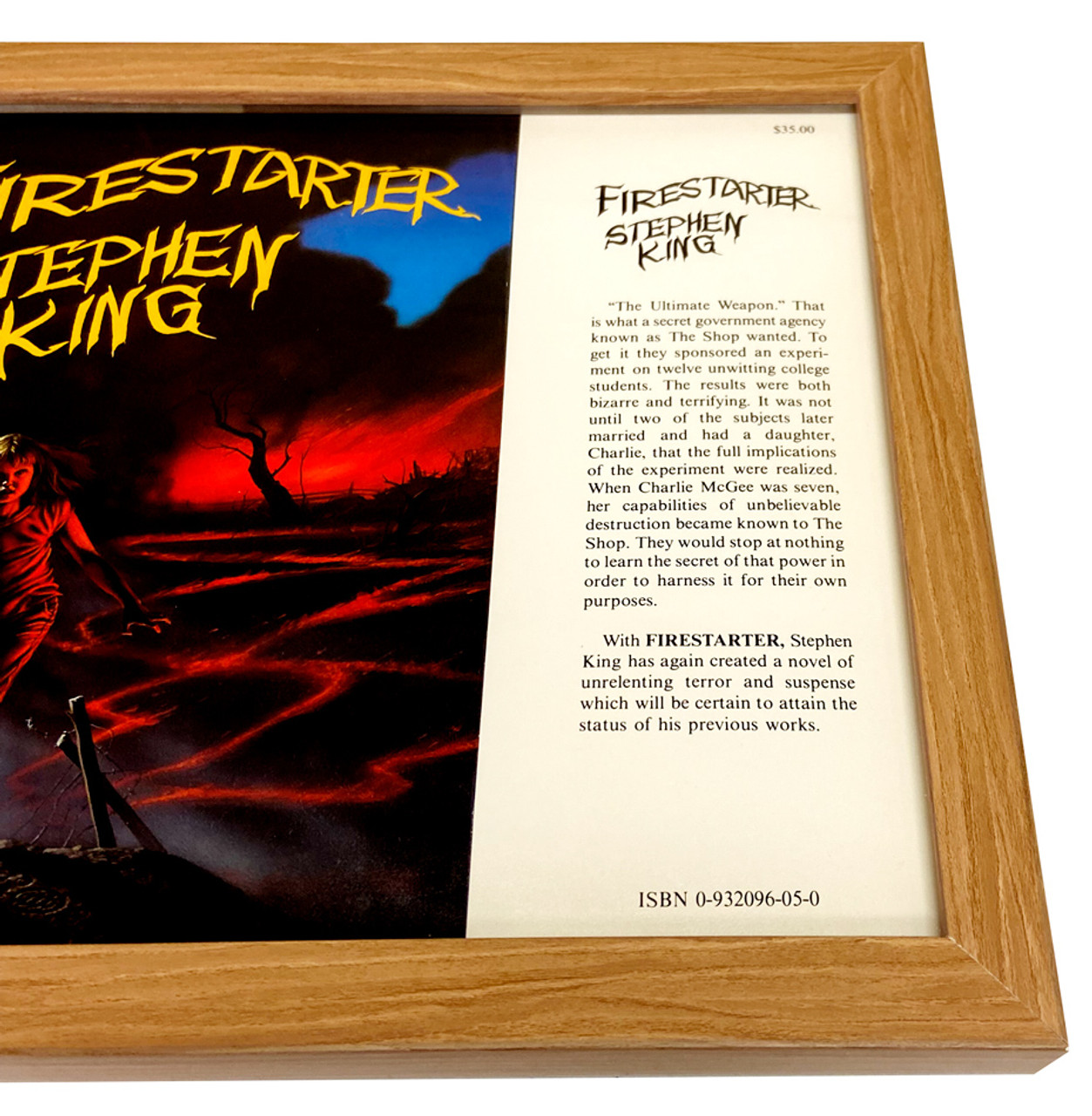 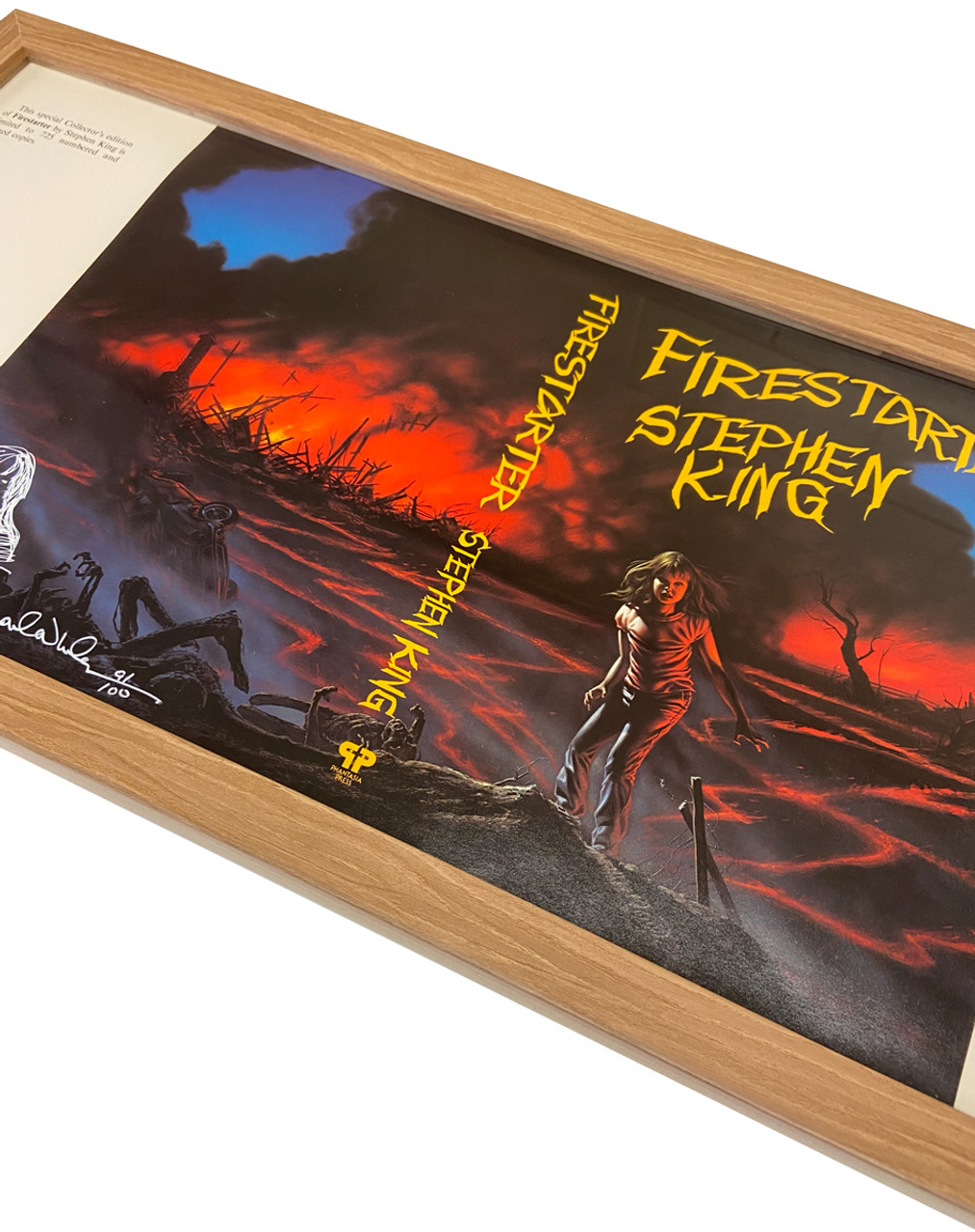 Personally signed by Michael Whelan. This is No. 91 of only 100

FIRESTARTER DUSTJACKET, SIGNED AND REMARQUED BY THE ARTIST, MICHAEL WHELAN.

Michael Whelan / Phantasia Press, March 2022. "Firestarter" Signed Limited Edition remarqued print. Remarqued with white paint and limited to only 100. Professionally wood framed and matted with museum quality UV protective non-glare glass.This is number 91 of only 100 produced in this edition. Includes original COA and bonus prints as shipped originally by the publisher. As New without any flaws.

Michael Whelan's first cover art for Stephen King - used on the dust jacket of a rare limited edition of FIRESTARTER. Here is the main character Charlie experiencing her full power. This painting predates the movie version by 4 years and Michael used his niece Laina as his model, but many fans have commented on the girl's similarity to Drew Barrymore.

Michael Whelan illustrated the cover for the limited edition of Firestarter back in 1980 for Phantasia Press. It was his first work with Stephen King and led to his assignment on The Gunslinger a year later. The book was limited to 725 copies plus 26 lettered editions and remains one of the most sought after editions of King’s work.

Being a constant reader himself, Michael knew this would be a great opportunity for fans—only Stephen King signed the book at publication—so he has also remarqued these original dustjackets.

The dustjackets are signed, numbered, and remarqued by Michael Whelan with a Certificate of Authenticity.

This special fine art remarqued print was produced in the following states:

1. Limited Edition dustjackets are remarqued in white paint and limited to 100 copies.

2. Founder’s Edition dustjackets are remarqued in yellow paint and limited to 10 copies.

3. Artist Edition dustjackets feature two remarques, one in white paint with a second in black ink.

Michael Whelan (born June 29, 1950) is an American artist of imaginative realism. For more than 30 years, he worked as an illustrator, specializing in science fiction and fantasy cover art. Since the mid-1990s, he has pursued a fine art career, selling non-commissioned paintings through galleries in the United States and through his website.

The Science Fiction Hall of Fame inducted Whelan in June 2009, the first living artist so honored. According to his Hall of Fame citation. 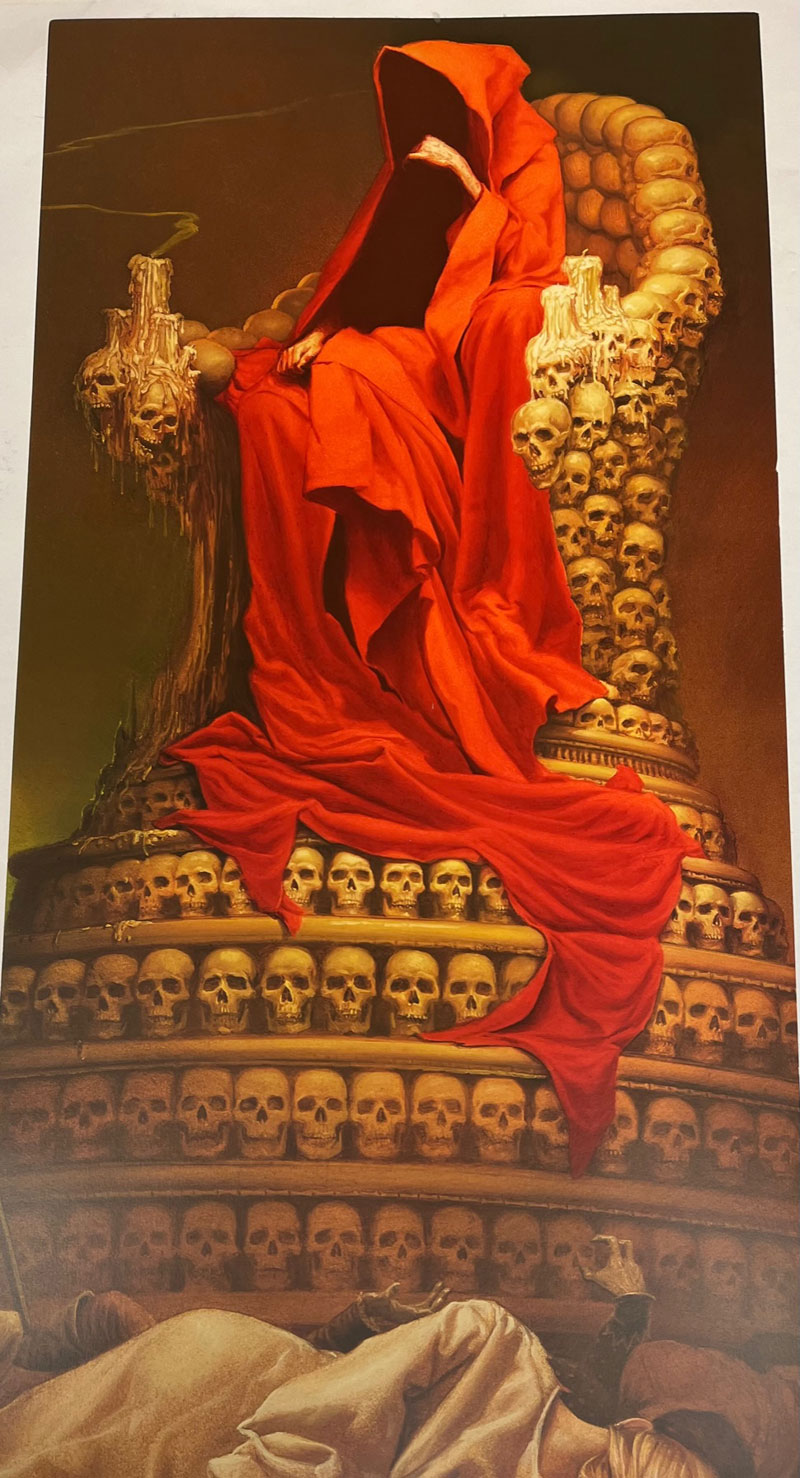 The signed artwork is Very Fine without any flaws. This item has been professionally matted and framed.