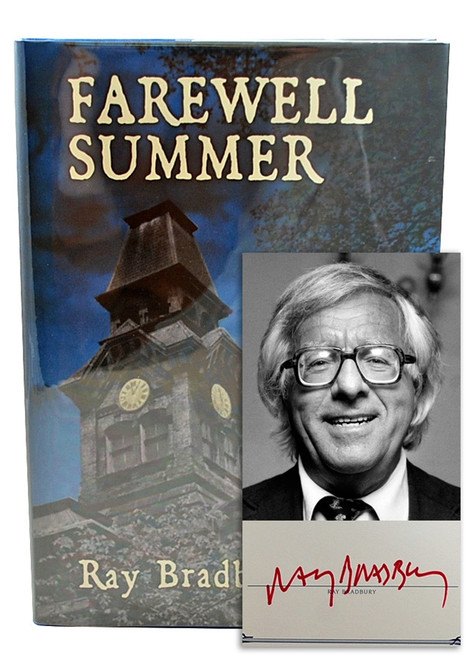 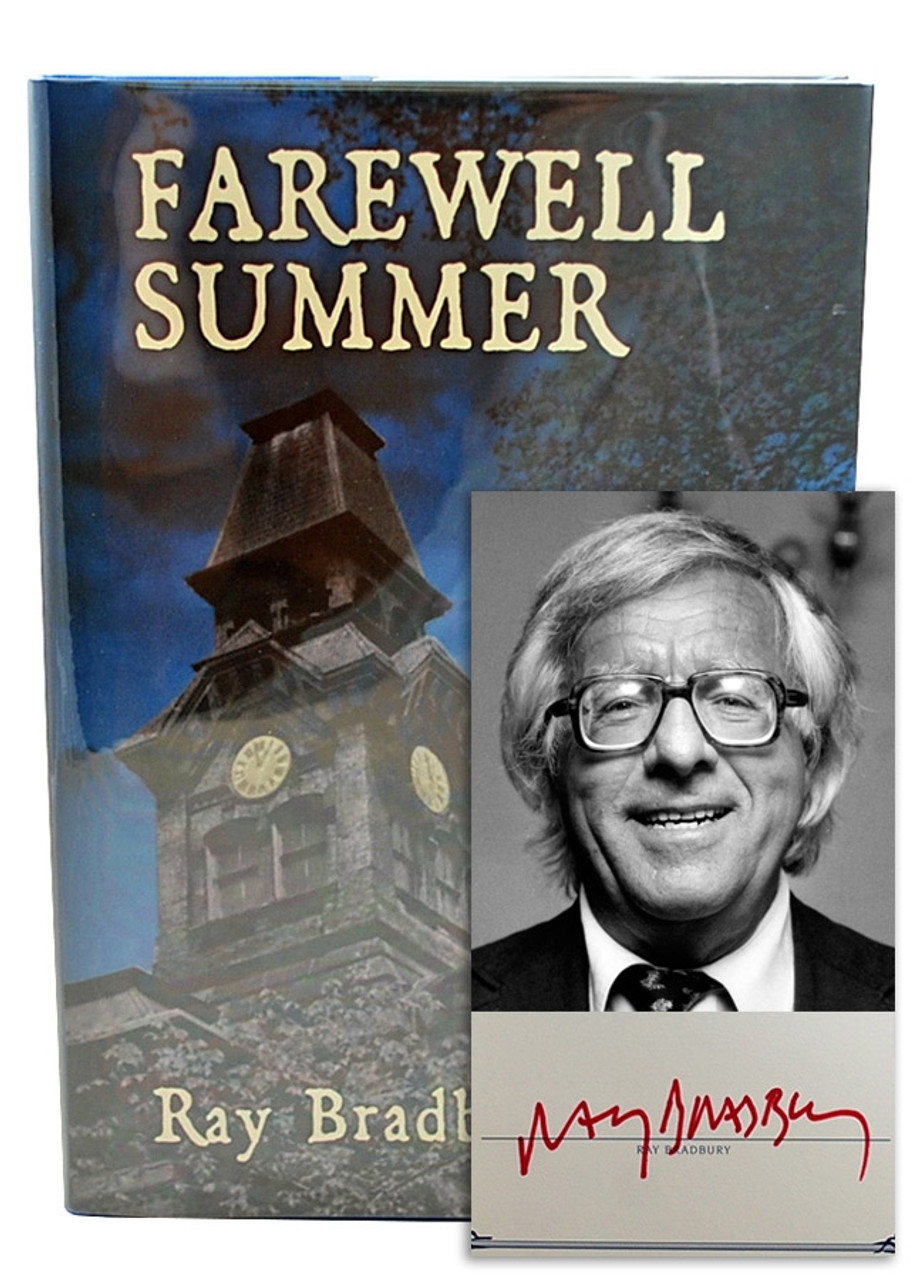 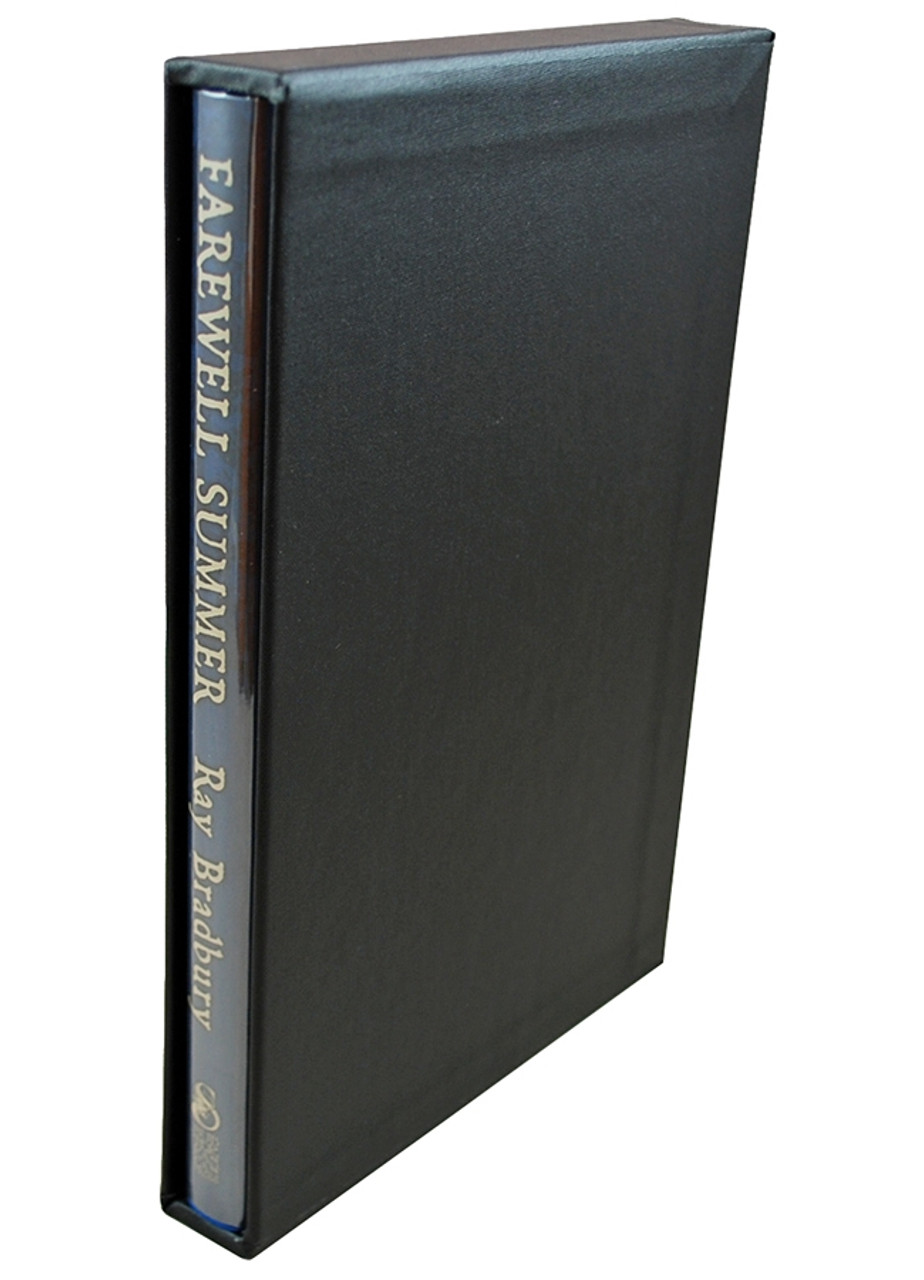 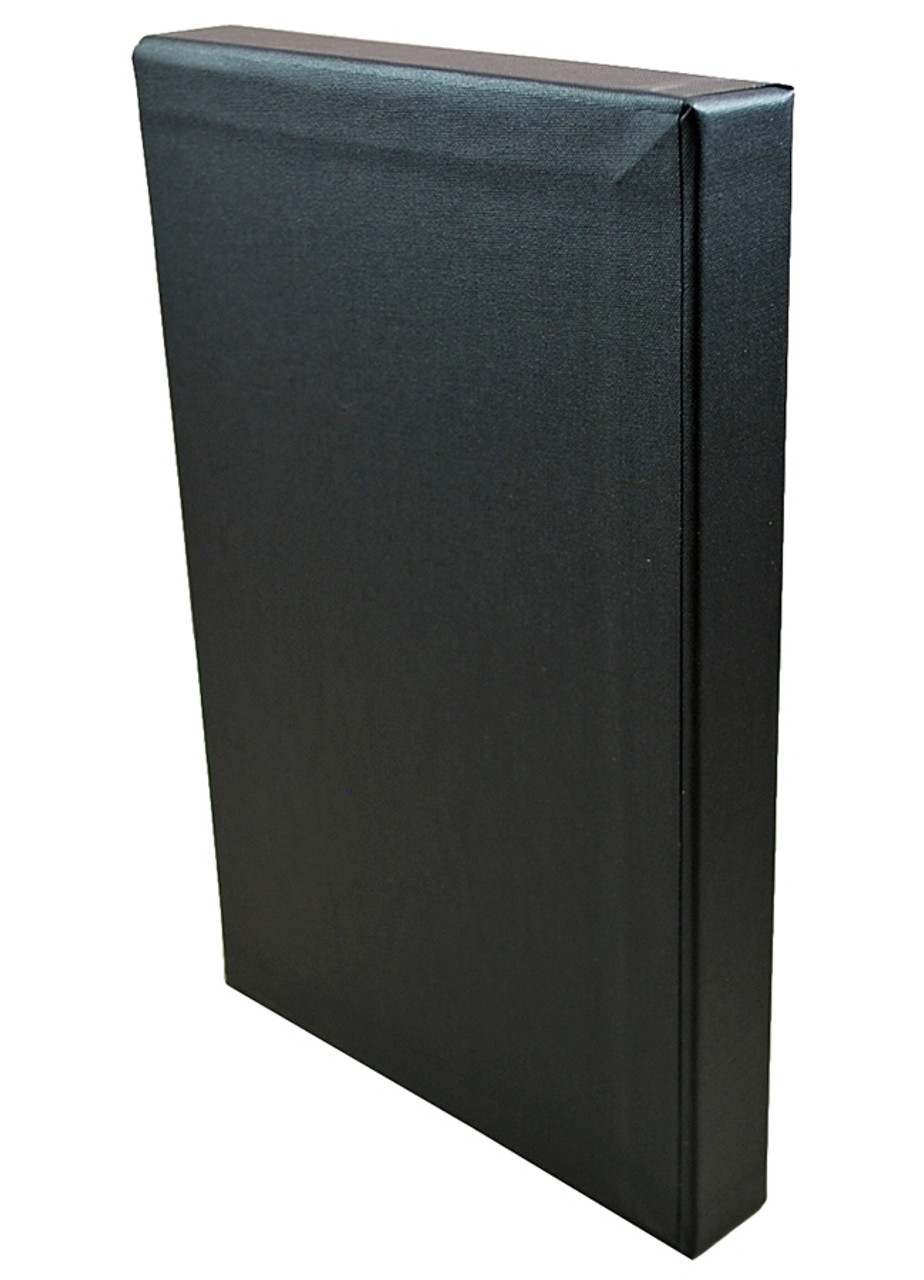 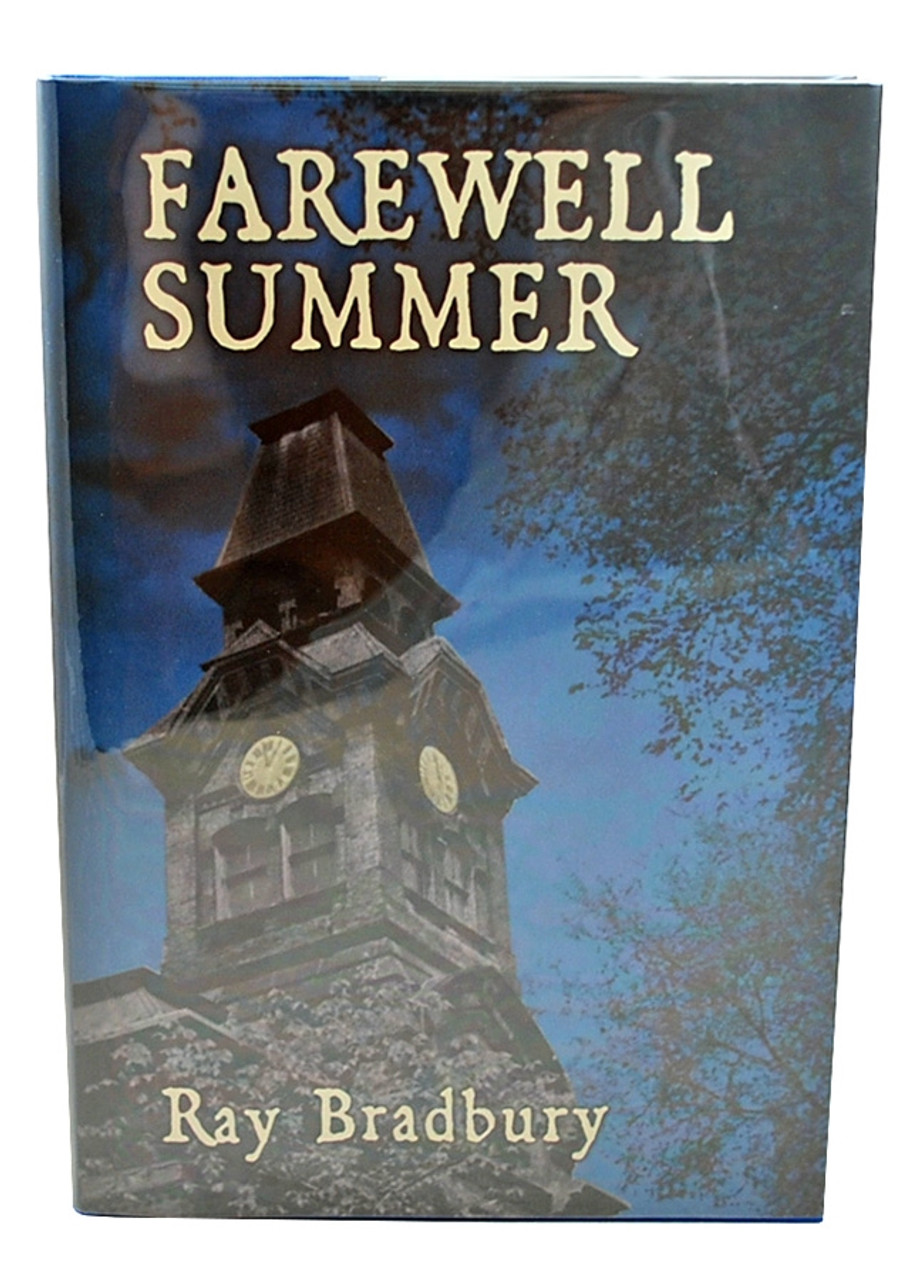 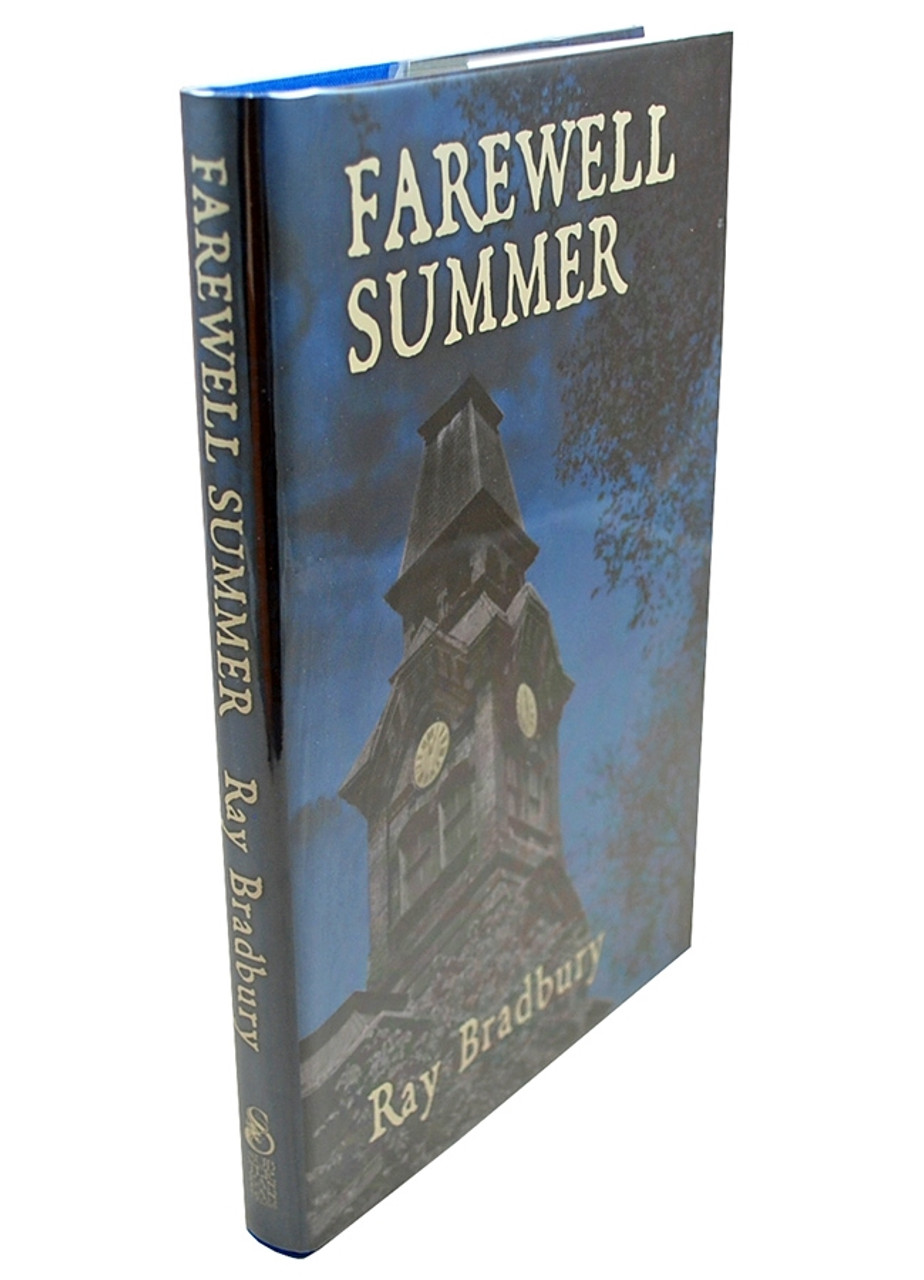 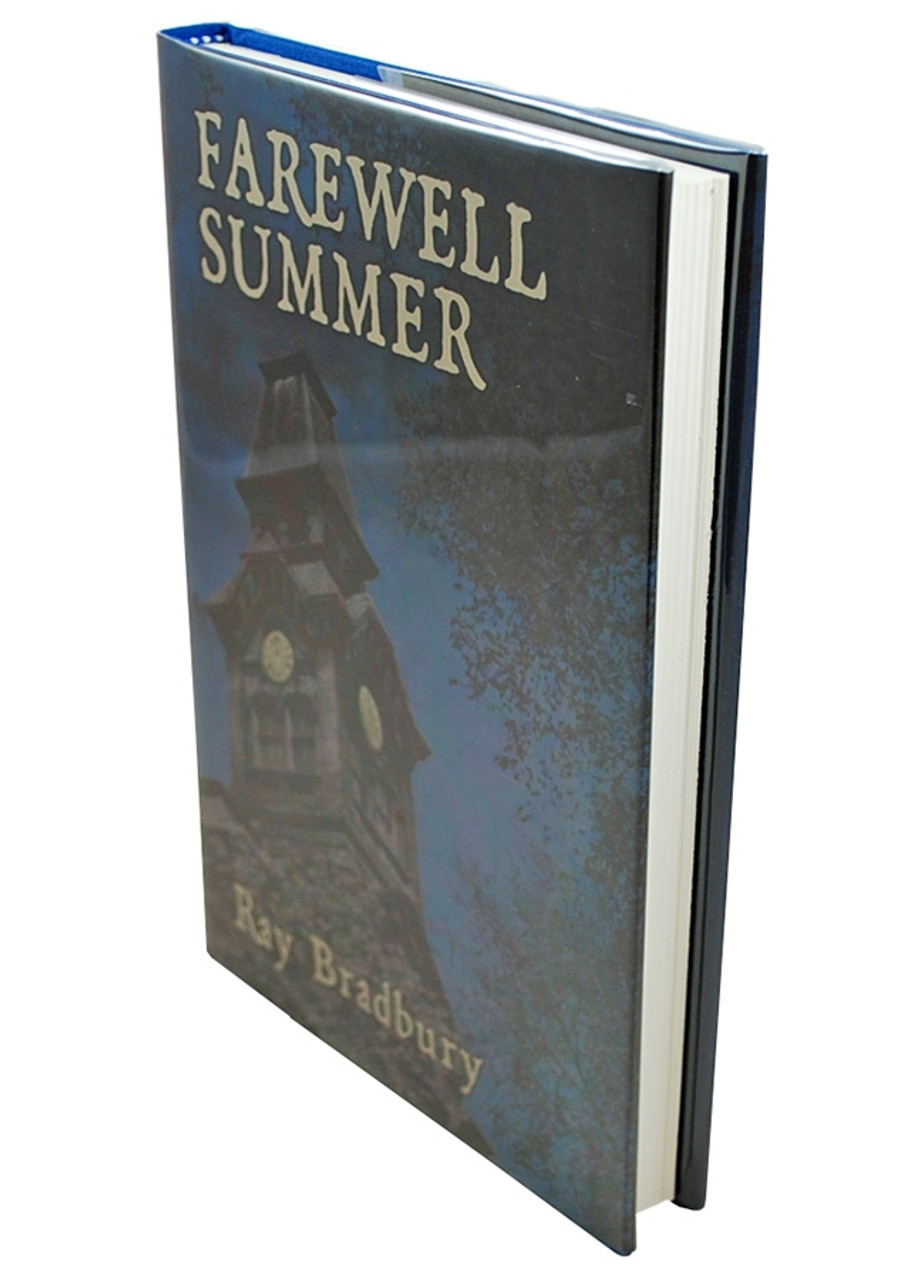 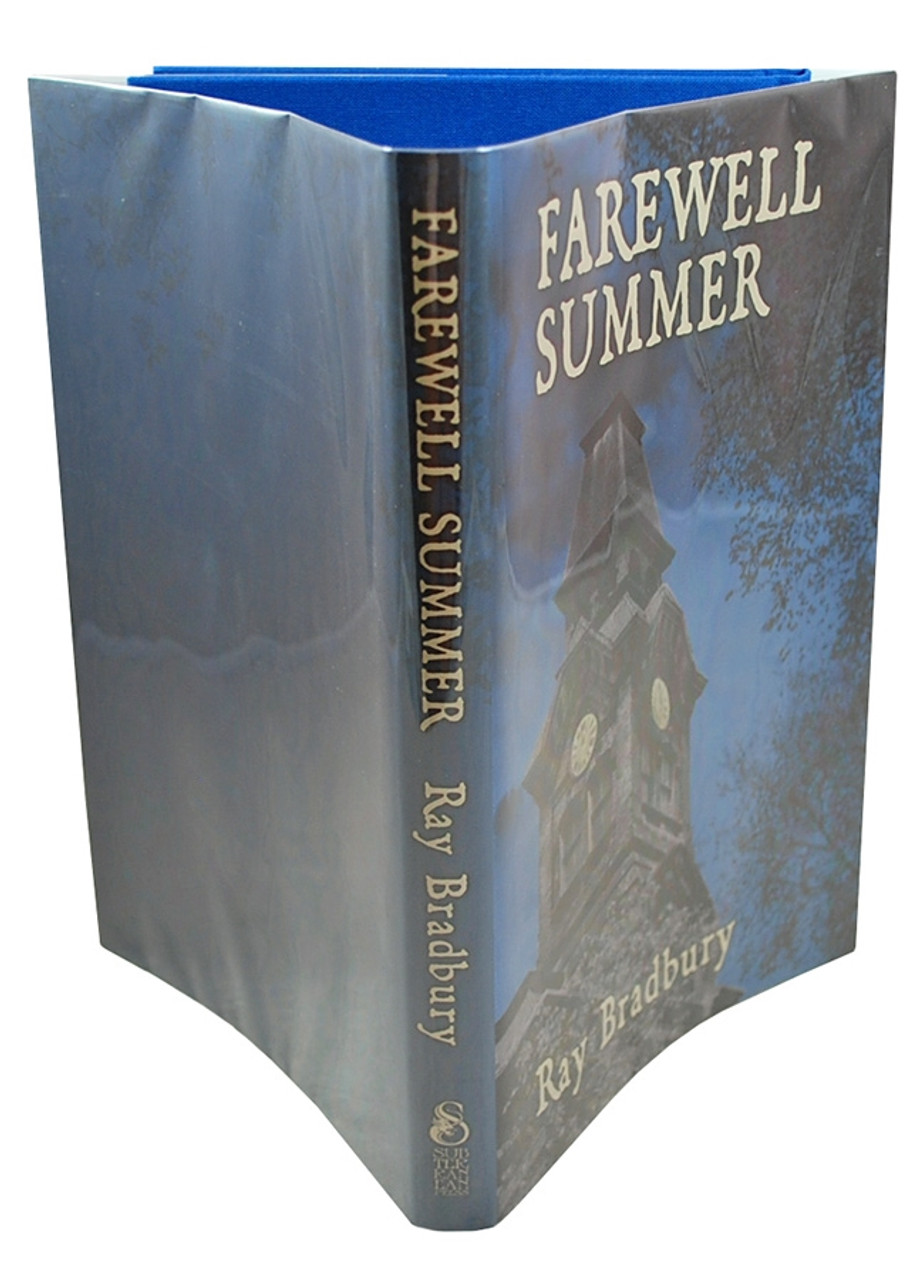 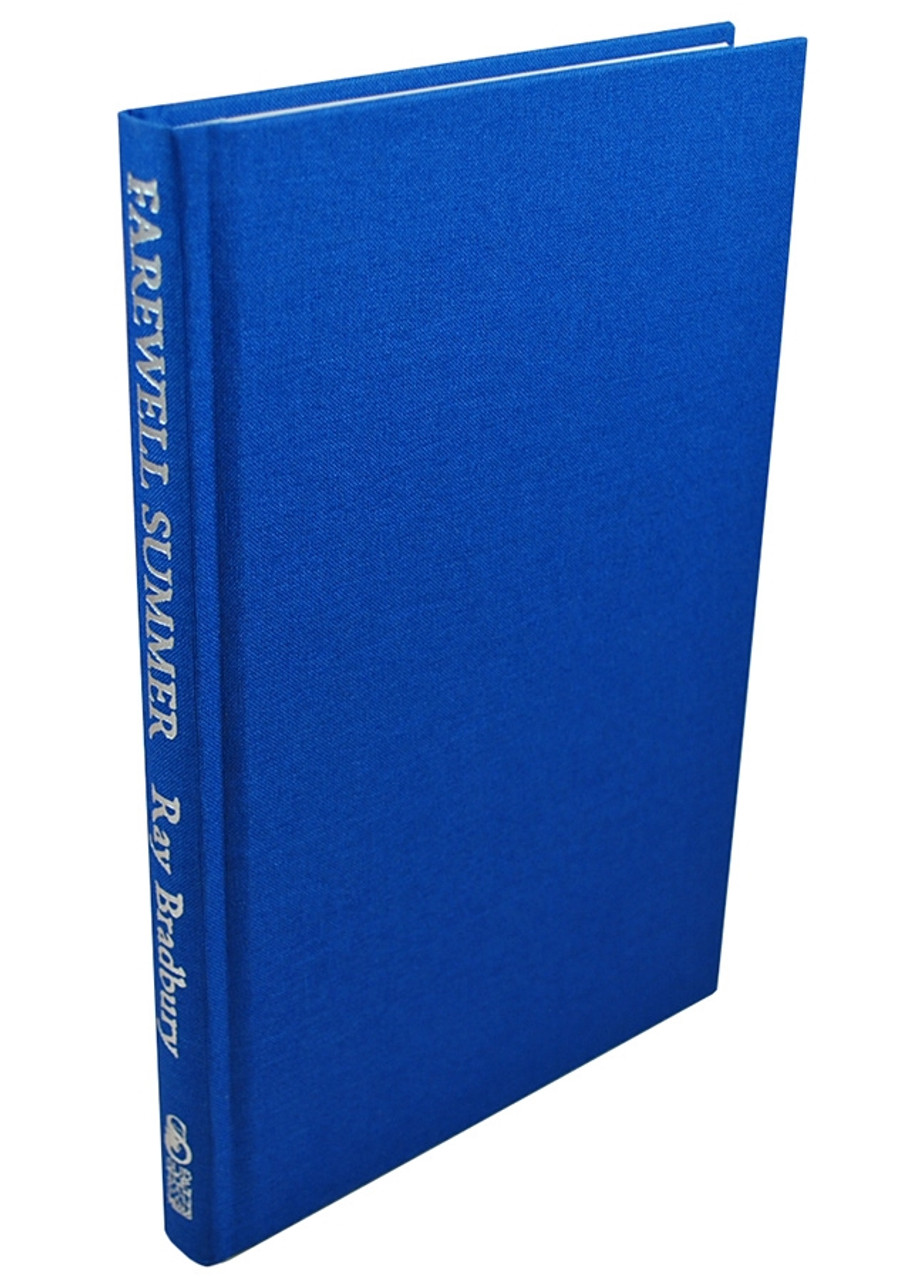 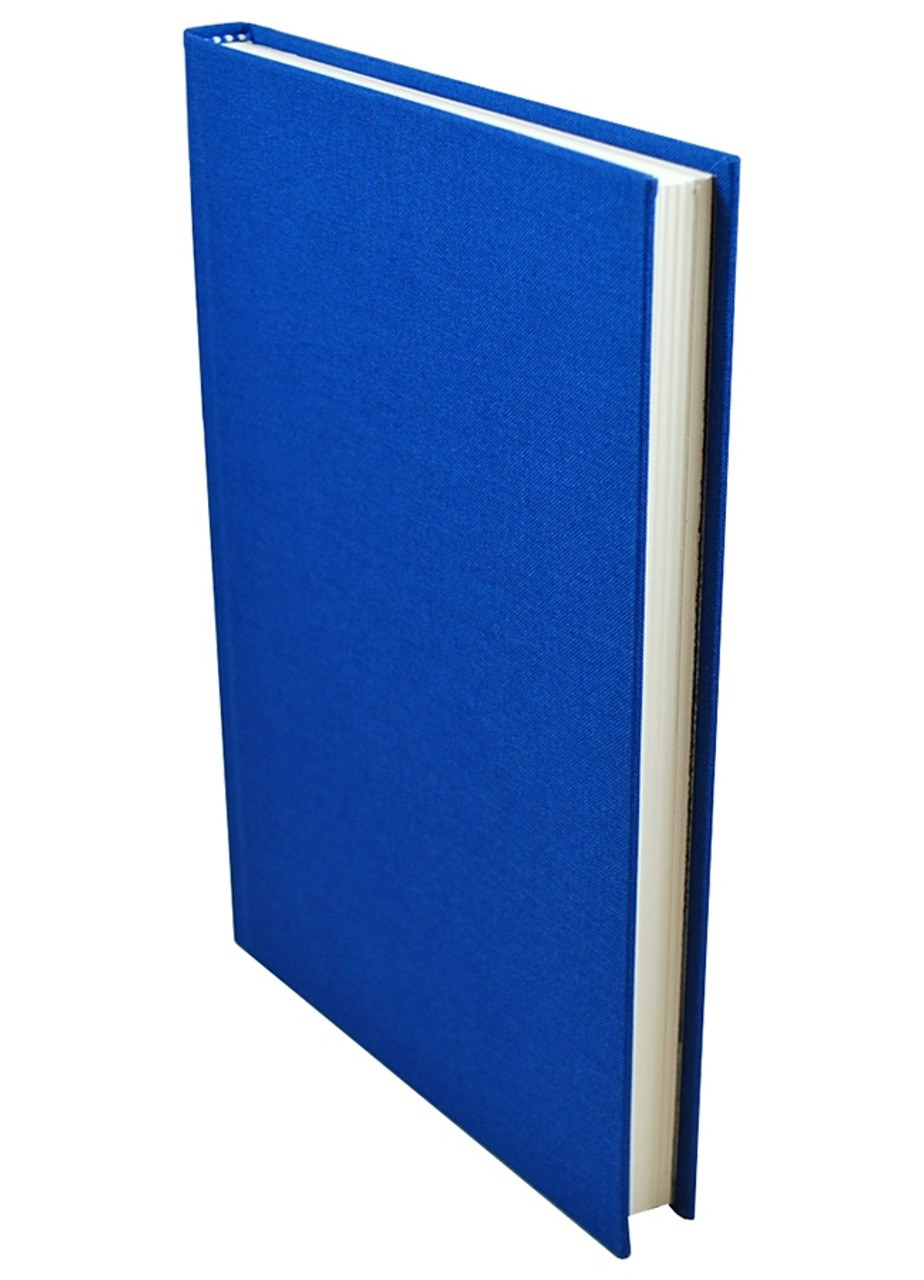 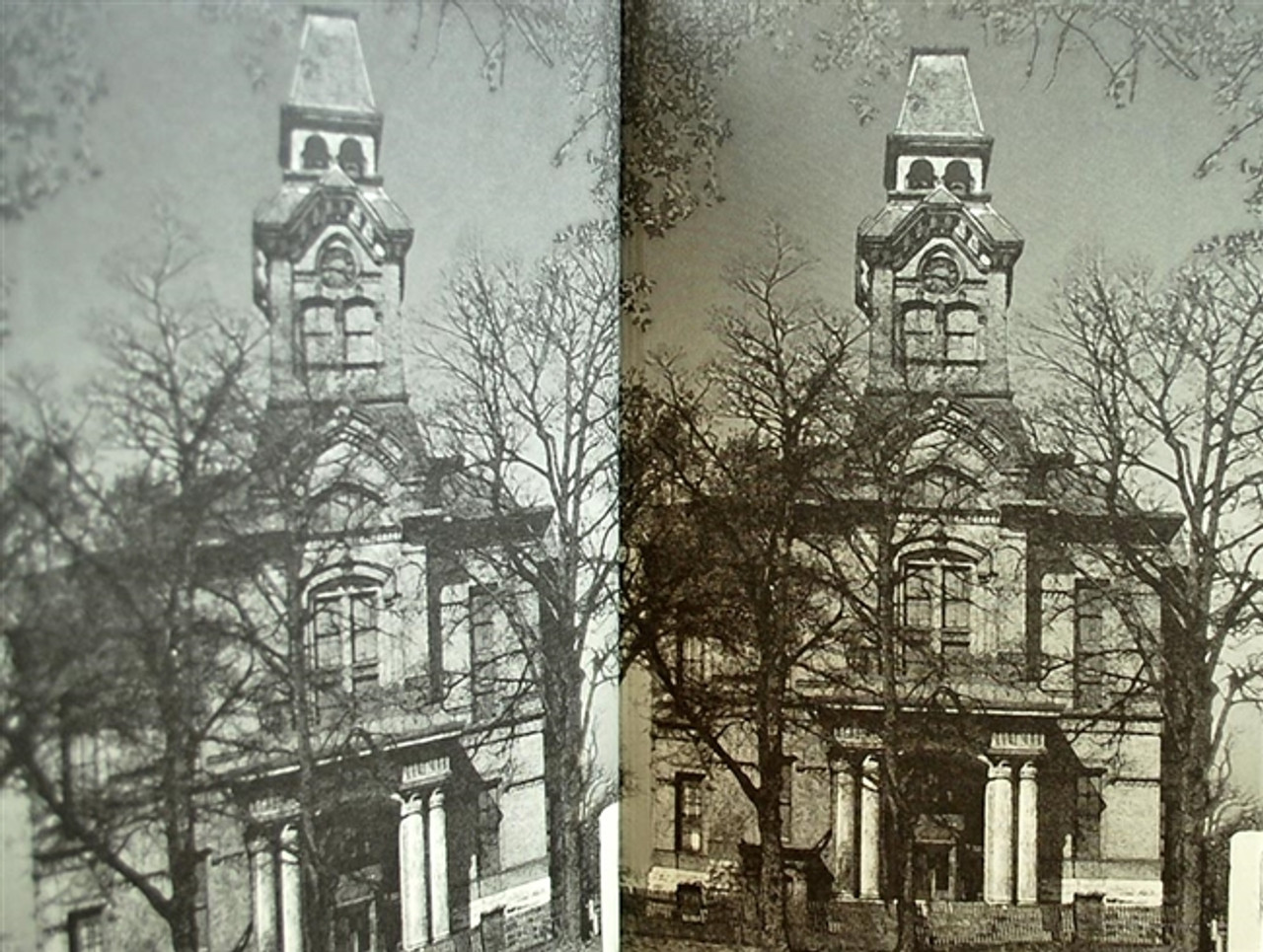 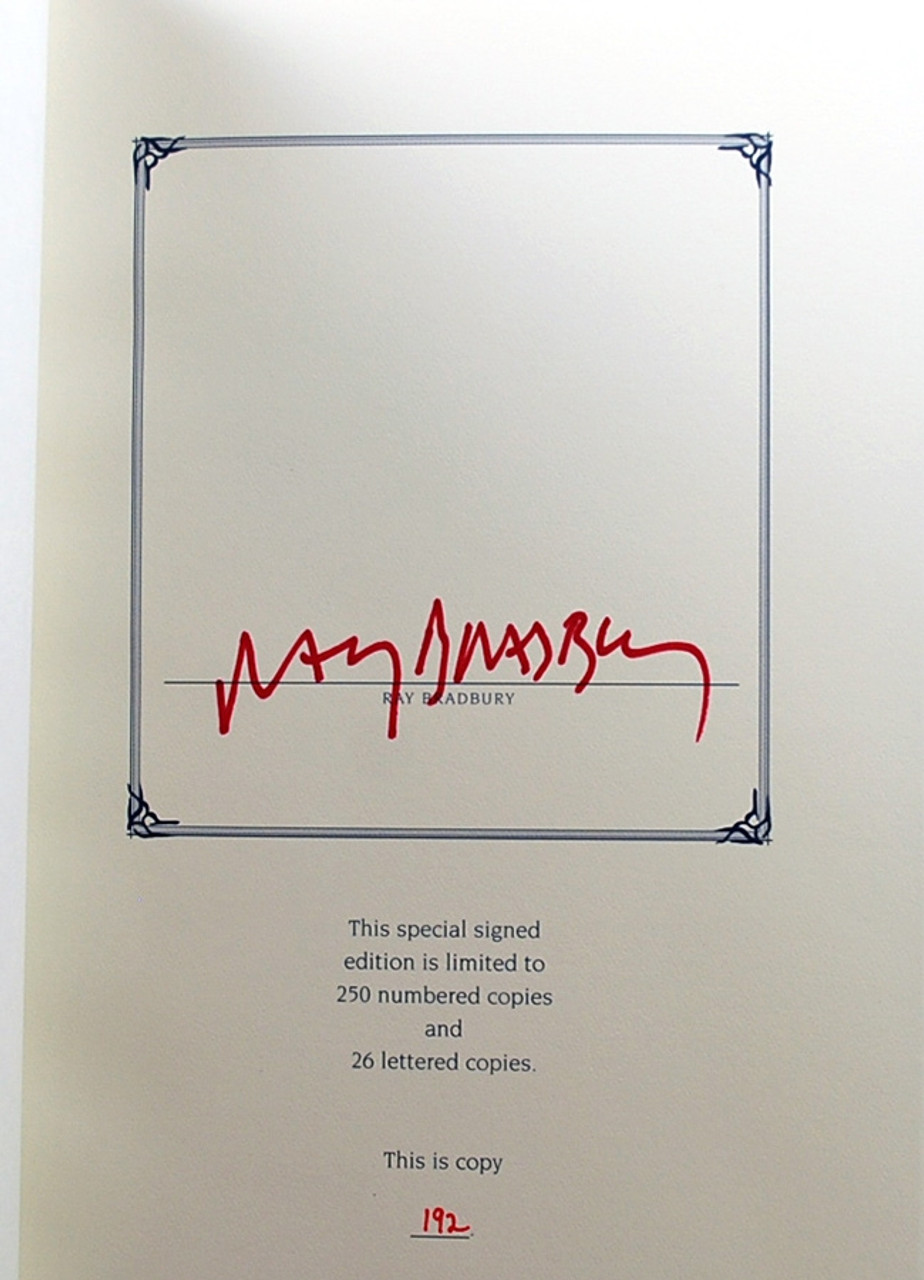 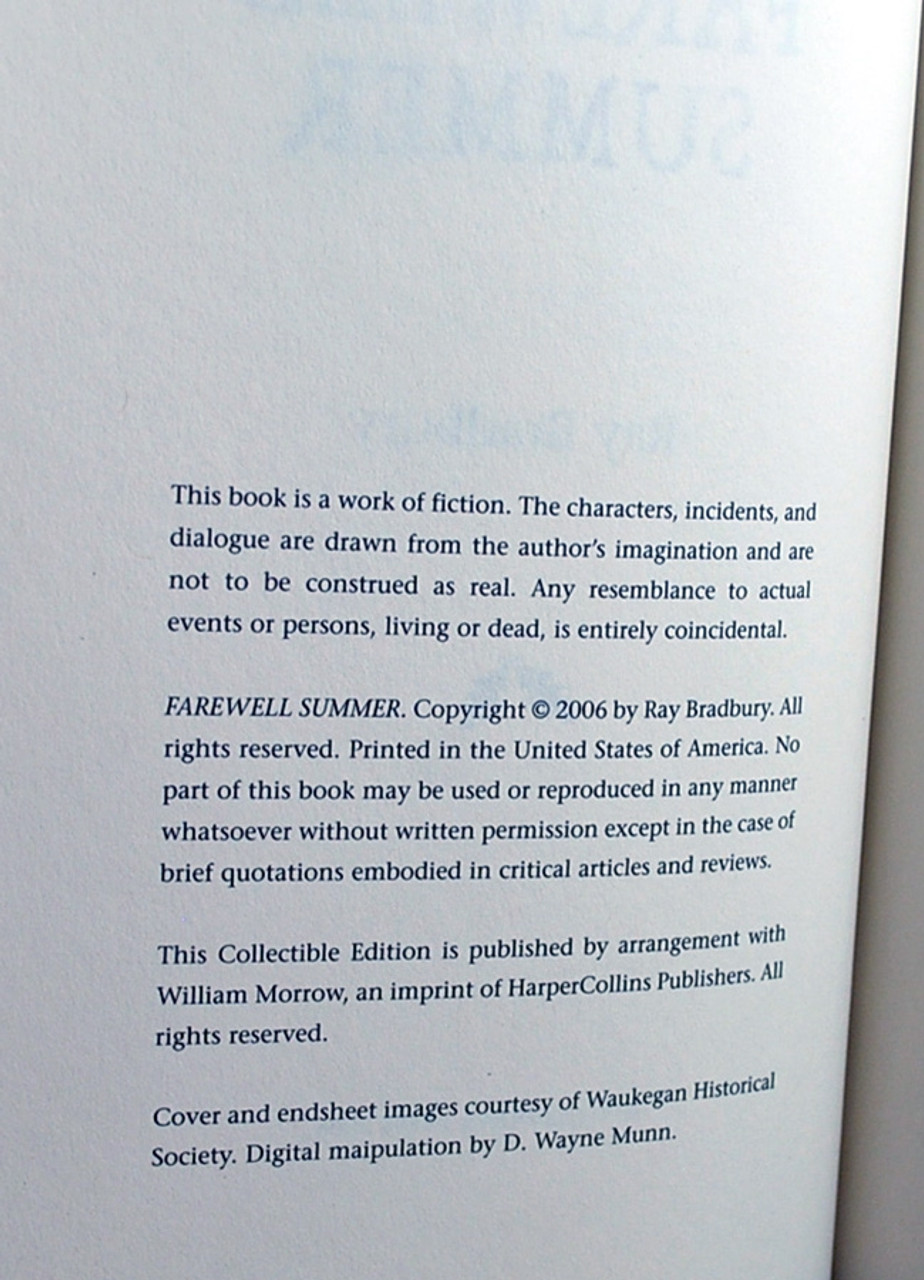 Numbered signed limited edition, No. 192 of 250. Printed in two colors, bound in a premium cloth, and housed in a custom slipcase. Features full color end-sheets by J.K. Potter.

This is the Subterranean Press limited edition of Farewell Summer, Ray Bradbury's dazzling sequel to Dandelion Wine. In a summer that refuses to end, in the deceiving warmth of earliest October, civil war has come to Green Town, Illinois. It is the age-old conflict: the young against the elderly, for control of the clock that ticks their lives ever forward. The first cap-pistol shot heard 'round the town is dead accurate, felling an old man in his tracks, compelling town elder and school board despot Mr. Calvin C. Quartermain to marshal his graying forces and declare total war on the assassin, thirteen-year-old Douglas Spaulding, and his downy-cheeked cohorts. Doug and his cronies, however, are most worthy adversaries who should not be underestimated, as they plan and execute daring campaigns, matching old Quartermain's experience and cunning with their youthful enthusiasm and devil-may-care determination to hold on forever to childhood's summer. Yet time must ultimately be the victor, with valuable revelations for those on both sides of the conflict. And life waits in ambush to assail Doug Spaulding with its powerful mysteries: the irresistible ascent of manhood, the sweet surrender to a first kiss...

One of the most acclaimed and beloved of American storytellers, Ray Bradbury has come home, revisiting the verdant landscape of one of his most adored works, Dandelion Wine. More than fifty years in the making, the long-awaited sequel, Farewell Summer, is a treasure; beautiful, poignant, wistful, hilarious, sad, evocative, profound, and unforgettable...and proof positive that the flame of wonder still burns brightly within the irrepressible imagination of the incomparable Bradbury.

Features images of the courthouse clock integral to the novel, courtesy of the Waukegan Historical Society.

From Publishers Weekly:
This poignant, wise but slight "extension" of the indefatigable Bradbury's semi-autobiographical Dandelion Wine picks up the story of 12-year-old Douglas Spaulding in October of 1928, when the warmth of summer still clings to Green Town, Ill. As in his episodic 1957 novel, Bradbury evokes the rhythms of a long-gone small town America with short, swift chapters that build to a lyrical meditation on aging and death. Playing at war, the imaginative Douglas and his friends target the town's elderly men, and the outraged 81-year-old bachelor Calvin C. Quartermain attempts to organize a counterattack against the boys' mischief. Rebelling against their elders - and the specter of age and death - Douglas and his gang steal the old men's chess pieces before deciding that Time, as embodied by the courthouse clock, is their true nemesis. The story turns on a gift of birthday cake that triggers Douglas and Quartermain's mutual recognition: "He had seen himself peer forth from the boy's eyes." Soon thereafter, Douglas's first kiss and new, acute awareness of girls serves as the harbinger of his inevitable adulthood. Bradbury's mature but fresh return to his beloved early writing conveys a depth of feeling.
Copyright Reed Business Information, a division of Reed Elsevier Inc. All rights reserved.

From Bookmarks Magazine:
Ray Bradbury, now in his mid-80s, explains in his postscript that the original Dandelion Wine manuscript included much of the material in Farewell Summer. His publisher at the time thought the book too long, and advised Bradbury to shelve the latter half. He certainly took the advice to heart. Fifty years later, here comes this satisfying denouement, one that speaks to themes of youth, aging, memory, and regrets. Reviewers praise Farewell Summer as an ideal swan song for a storied career that produced award-winning works like Fahrenheit 451 and Something Wicked This Way Comes and earned Bradbury the prestigious National Medal of Arts.
Copyright 2004 Phillips & Nelson Media, Inc.

Ray Bradbury's Dandelion Wine has aged remarkably well, losing none of its nostalgic charm during the 49 years since its first printing. Writing sequels is something entirely new in Bradbury's long career of perpetual creativity, and so his return to Green Town, Illinois, and the escapades of the author's boyhood alter ego, Douglas Spaulding, is surprising as well as welcome. Whereas Dandelion Wine takes the form of a series of interconnected tales, Farewell Summer tells one unbroken story set during an autumnal heat wave in the year Douglas turns 14. Lamenting summer's sudden passage, he and his childhood cronies decide to wage "war" against the senior tenants of the stately houses lining Green Town's cavernous ravine. Intending to stop time in its tracks, the gang purloins chess pieces from the town square and sabotages the workings of the courthouse clock with fireworks. None of these antics sits too well with town elder statesman Calvin C. Quartermain, who launches his own brand of psychological warfare against the boys, which culminates in Douglas' first kiss. A final showdown between the two rivals finds both moving toward an unexpected, mutually enlightening truce. While Bradbury aficionados may find the novel's brief length somewhat disappointing, they'll find, too, that his prose remains masterfully precision-tuned. A touching meditation on memories, aging, and the endless cycle of birth and death, and a fitting capstone, perhaps, to a brilliant career. Carl Hays
Copyright American Library Association. All rights reserved

Lifetime Guarantee of Signature Authenticity. Personally signed by Ray Bradbury directly into the book. The autograph is not a facsimile, stamp, or auto-pen.
VERY FINE GUARANTEED. A wonderful bright clean copy free of any markings, writings, or stamps. Sharp corners that have not been bumped. Unread book with square and tight binding. No bookplates attached or indication of any removed. Edges are free of any marks, spots, scratches, or blemishes.