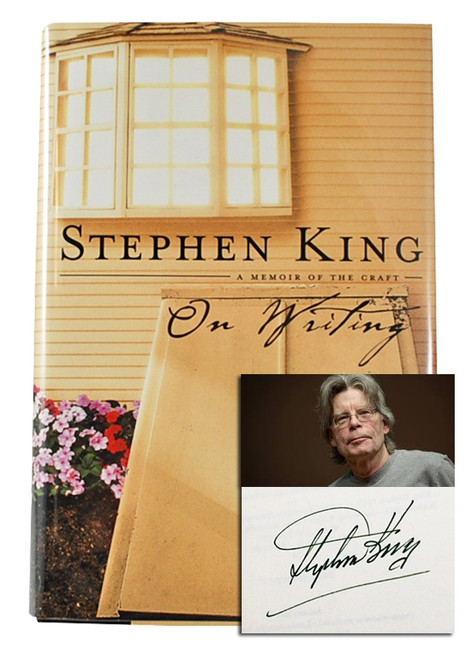 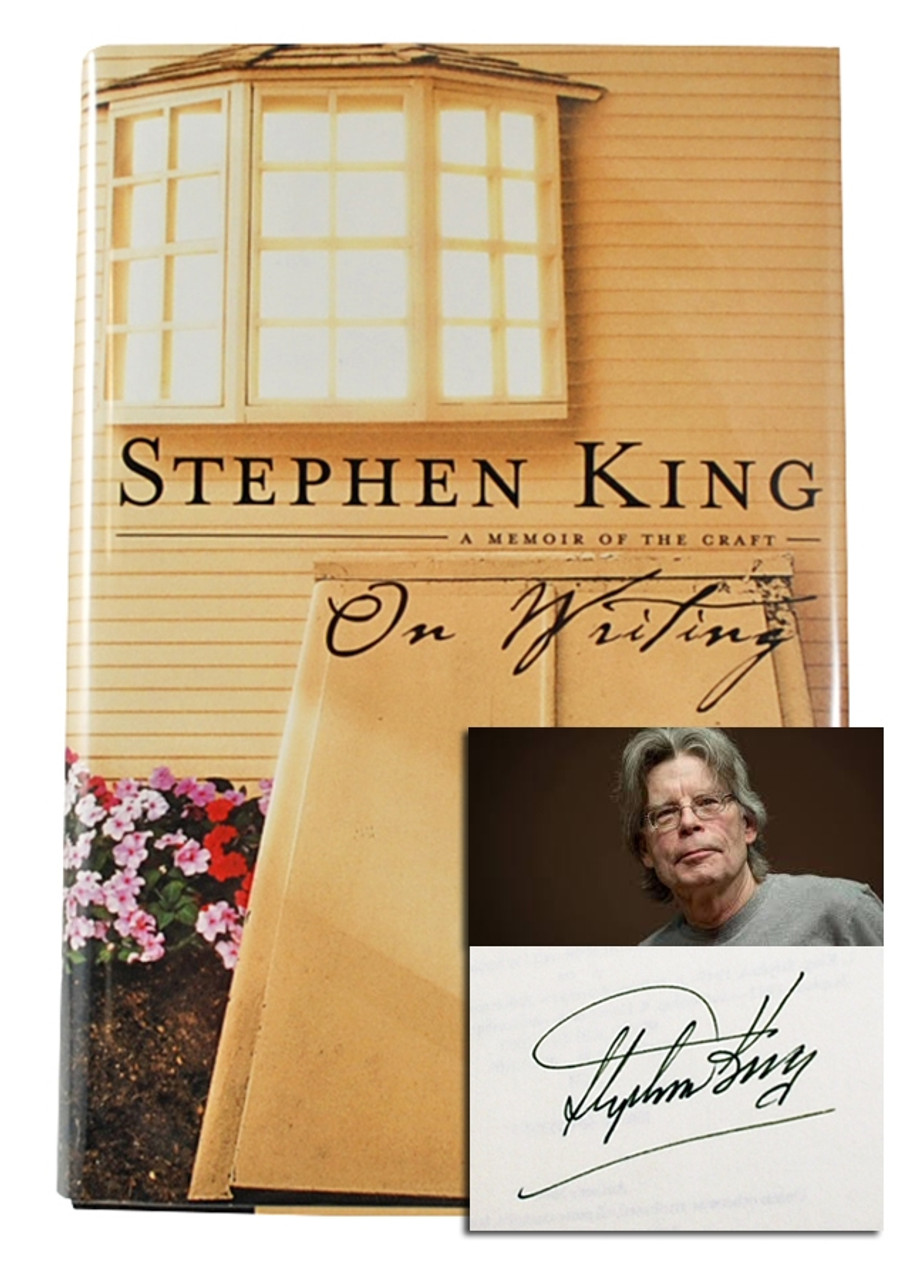 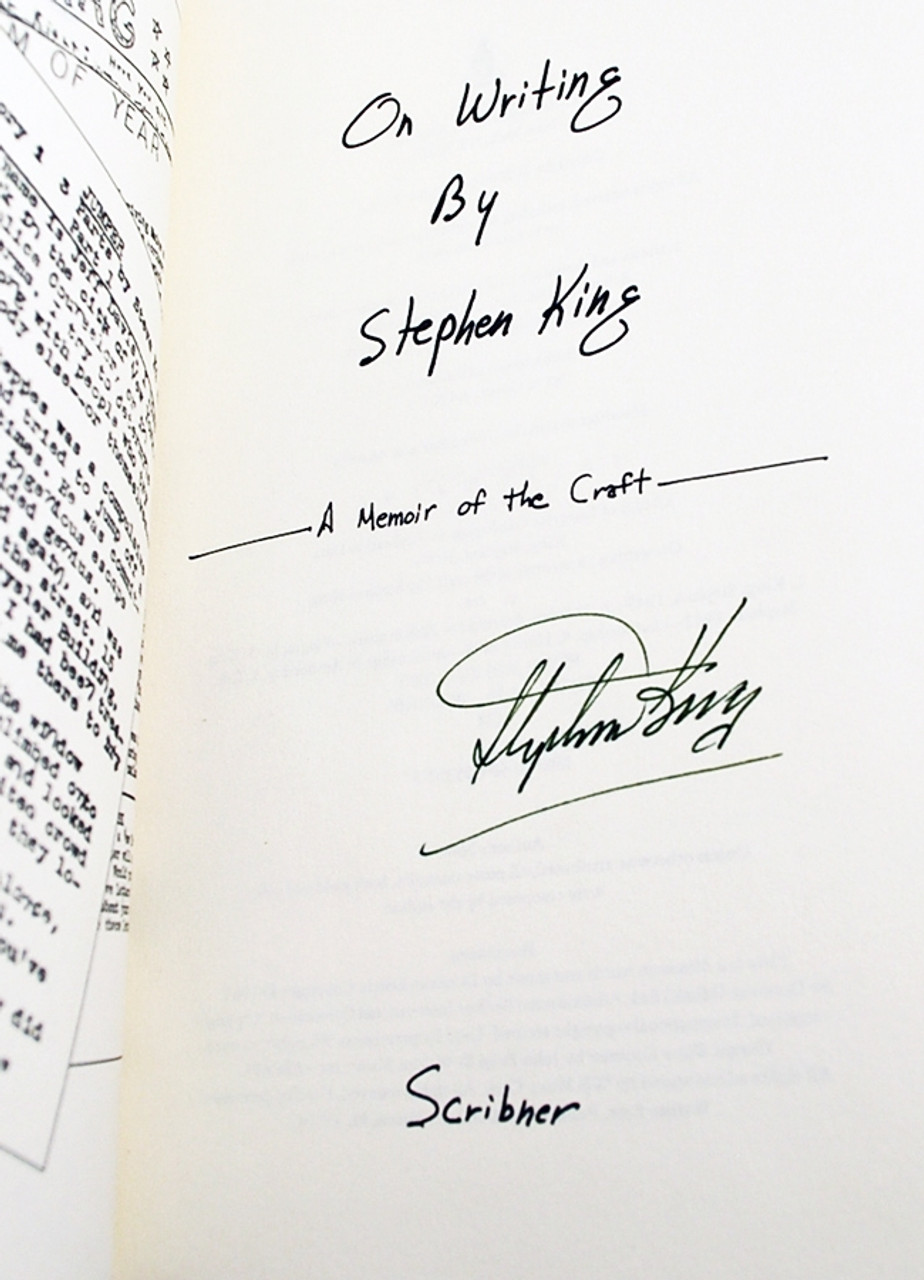 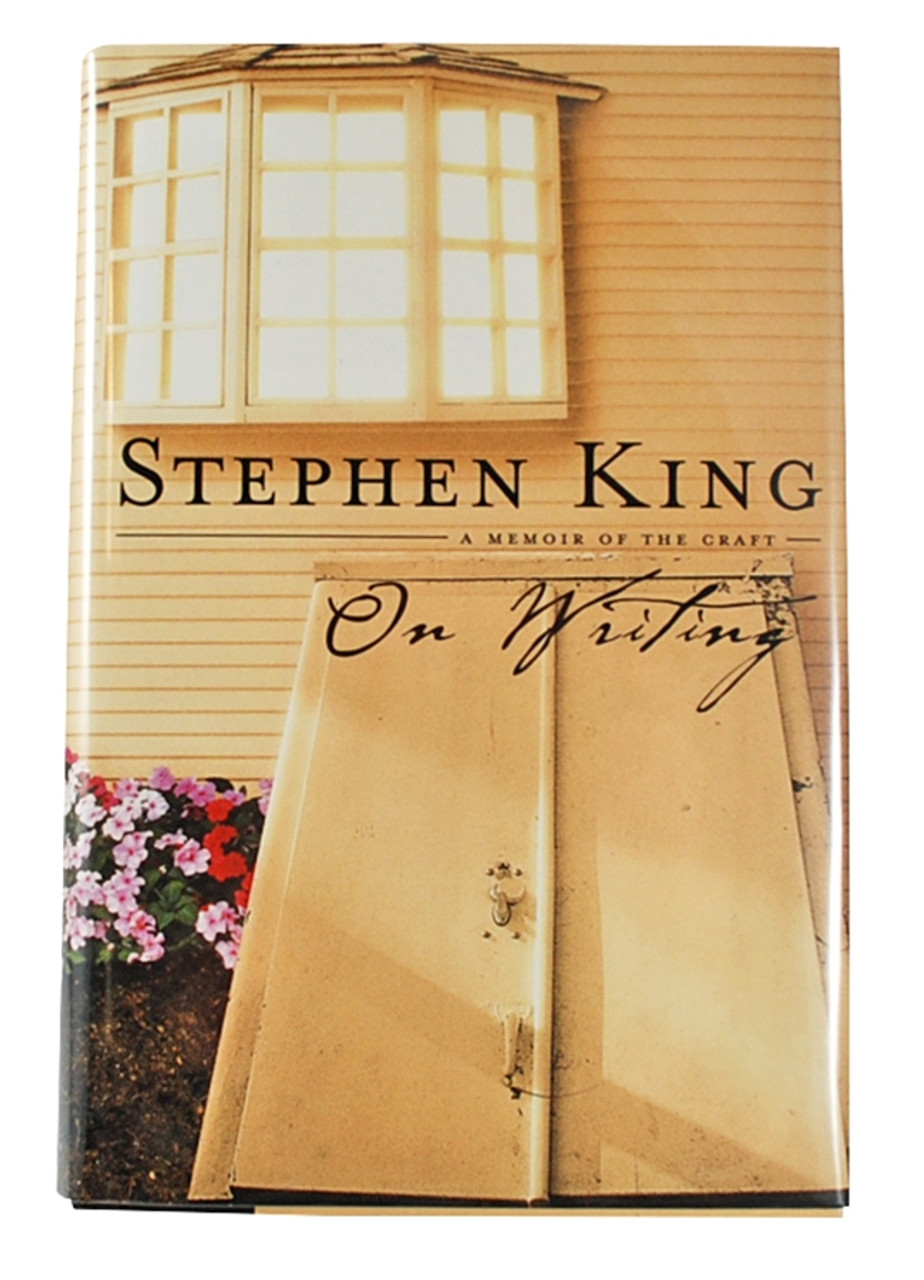 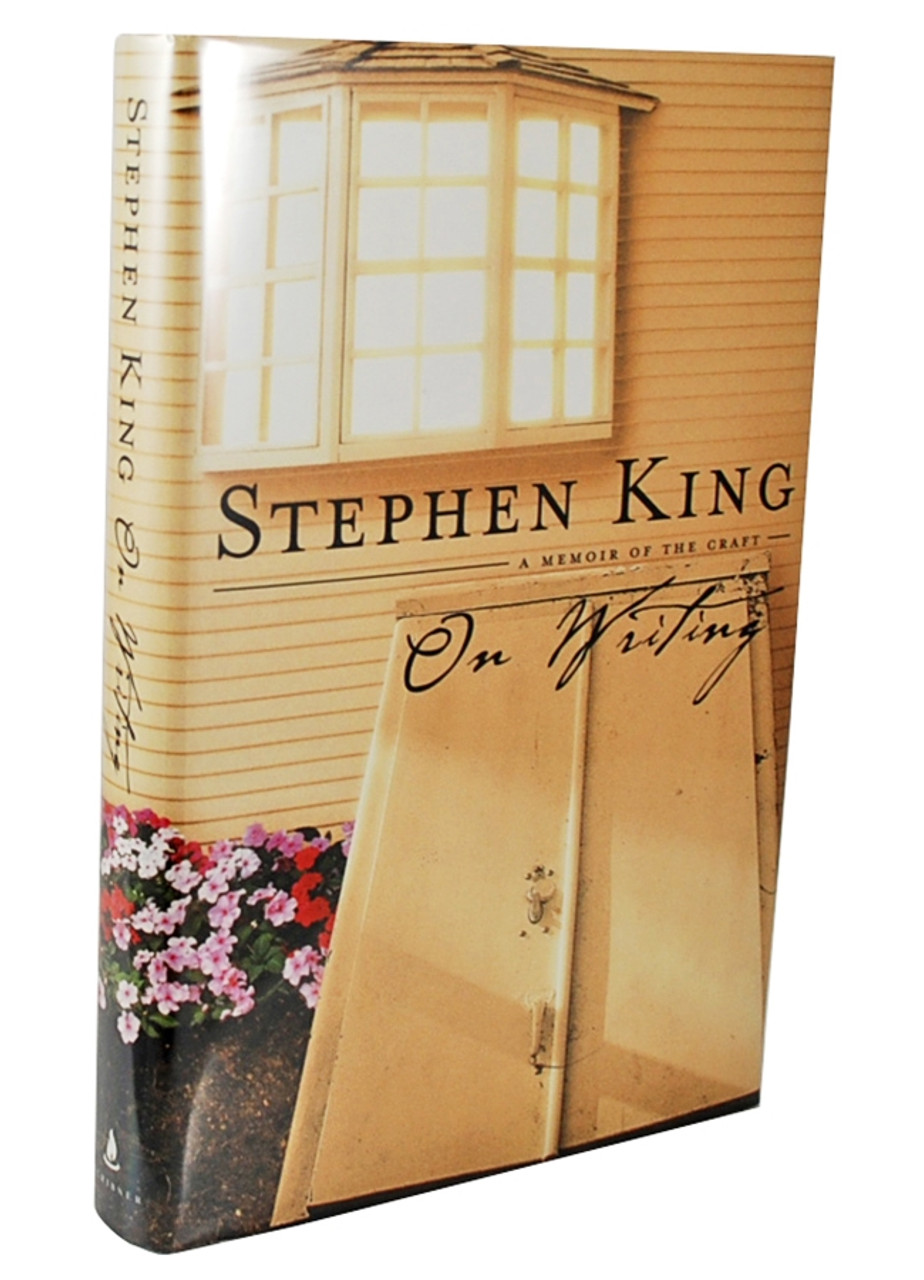 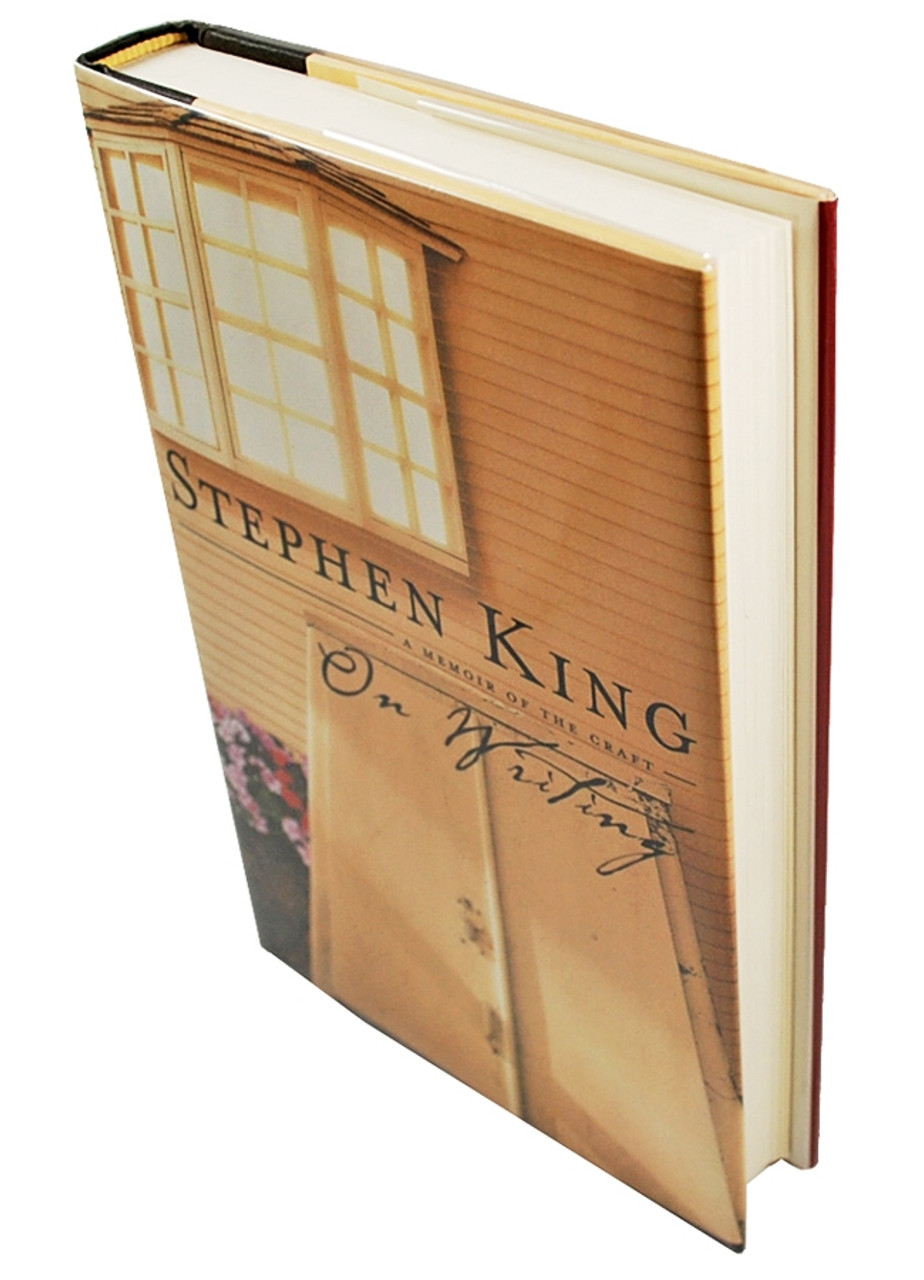 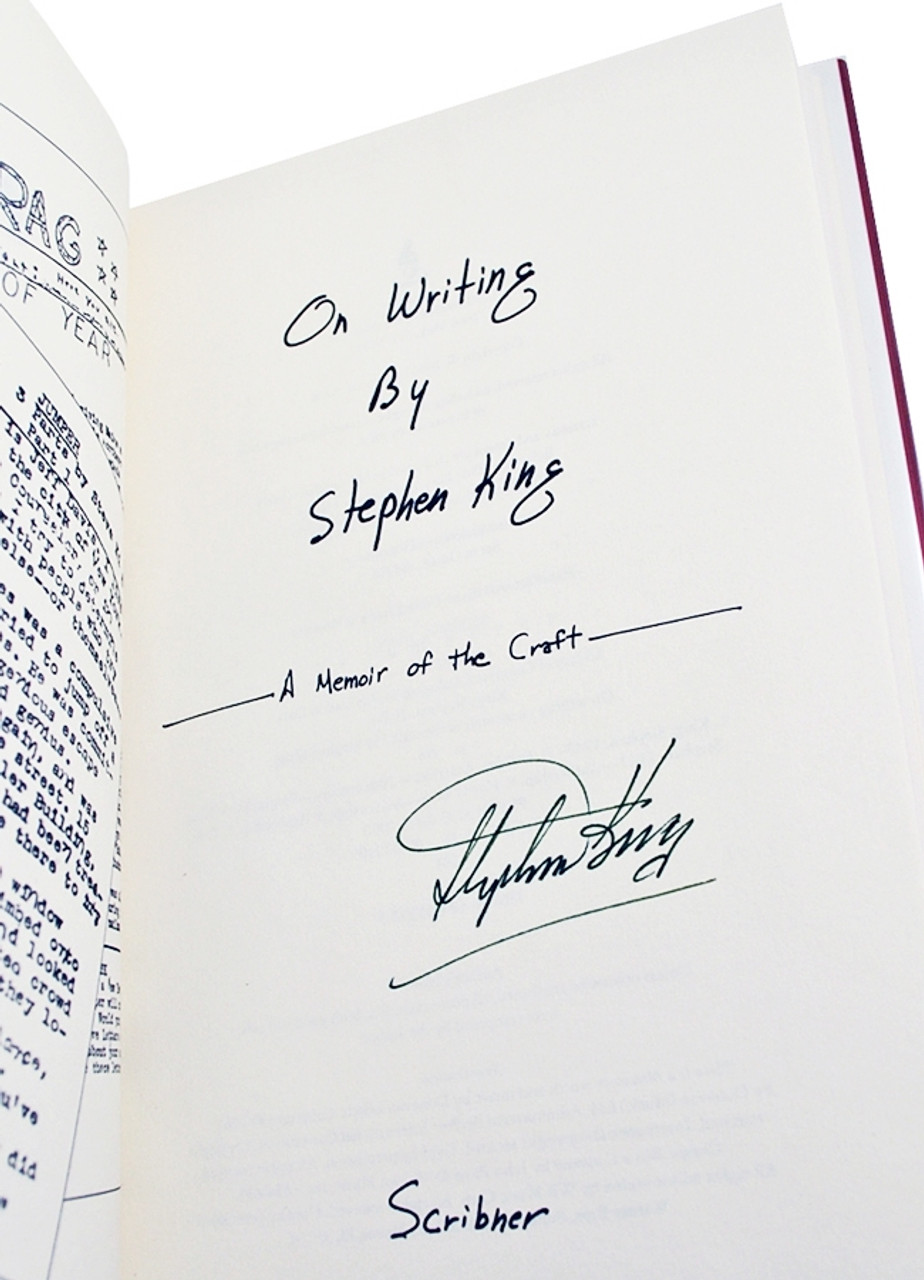 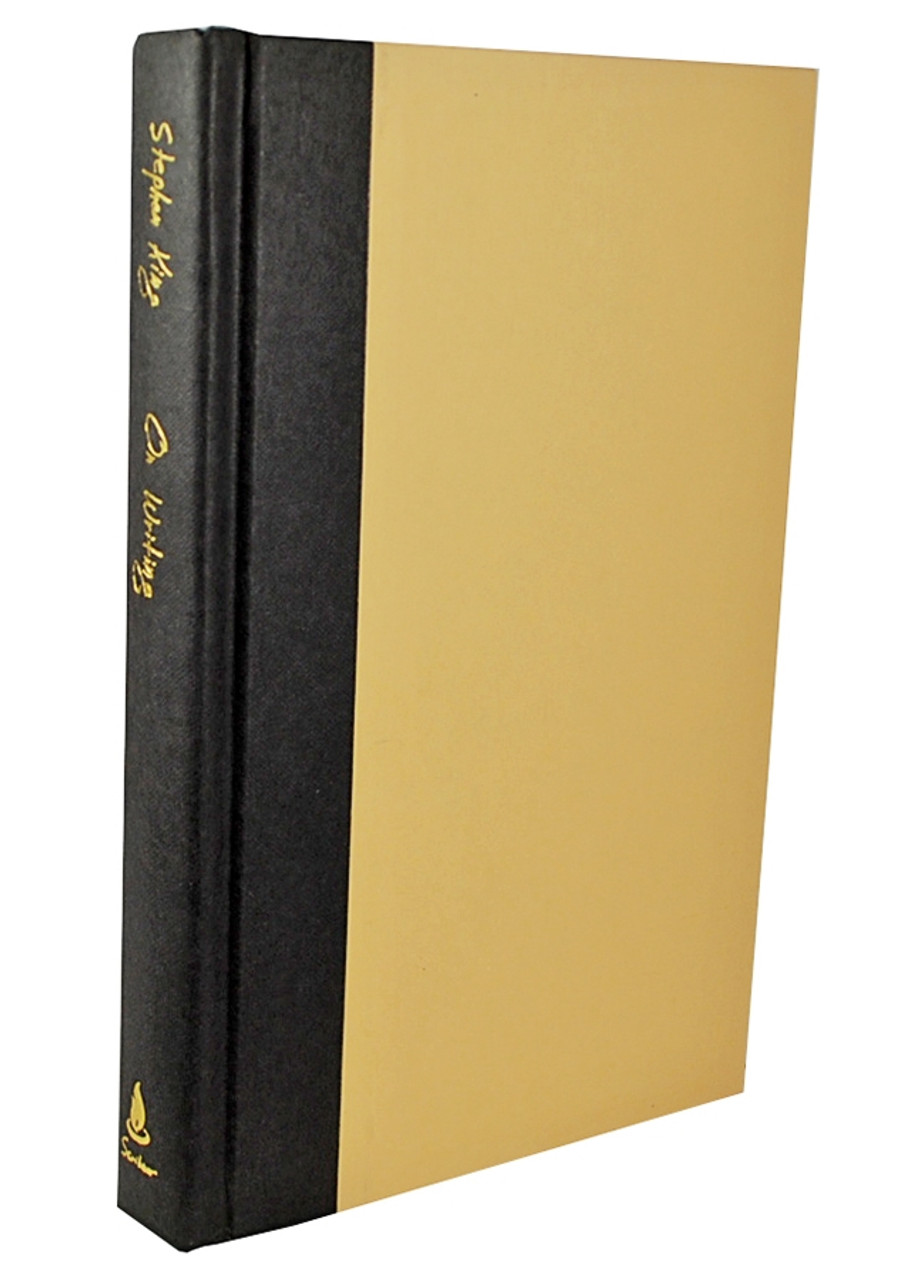 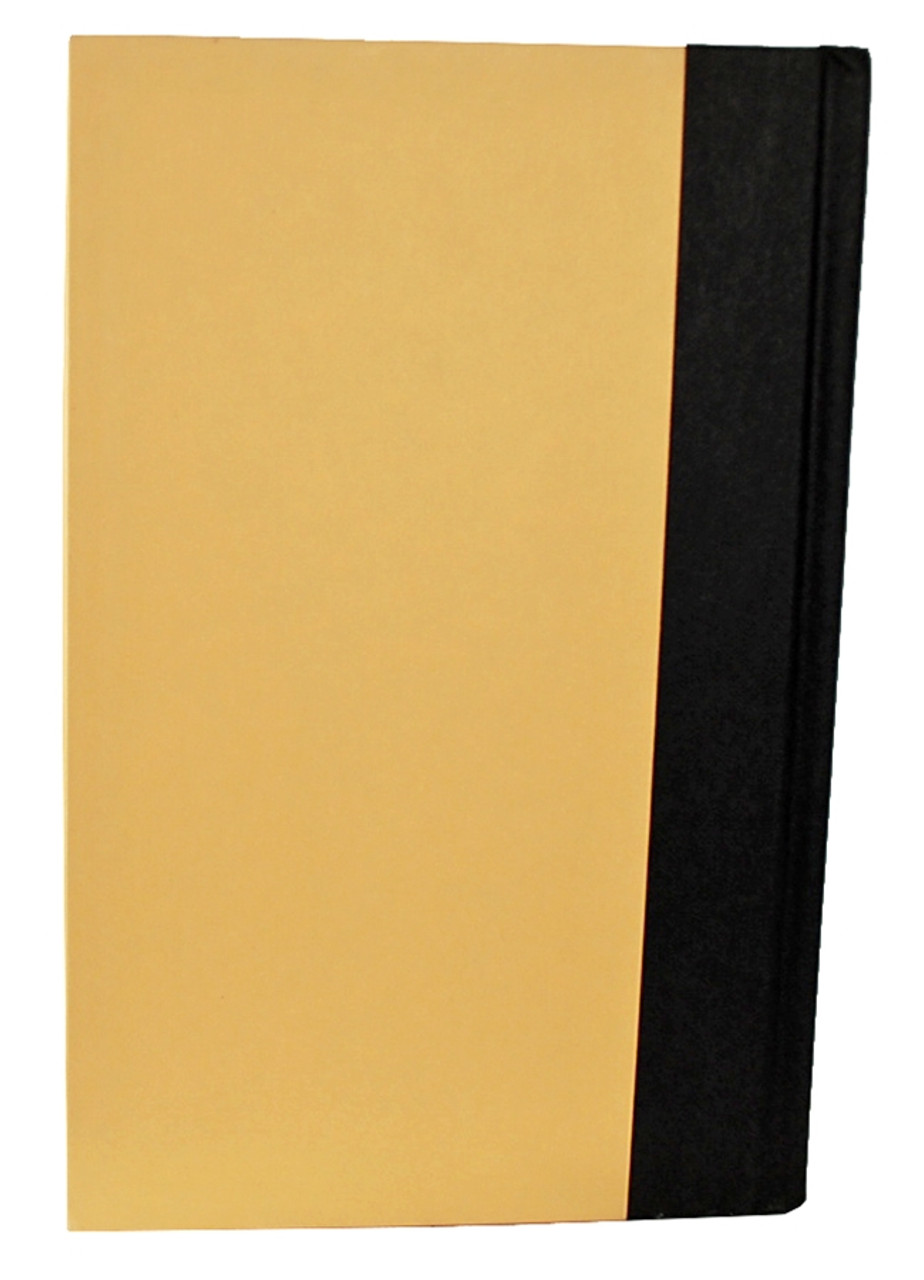 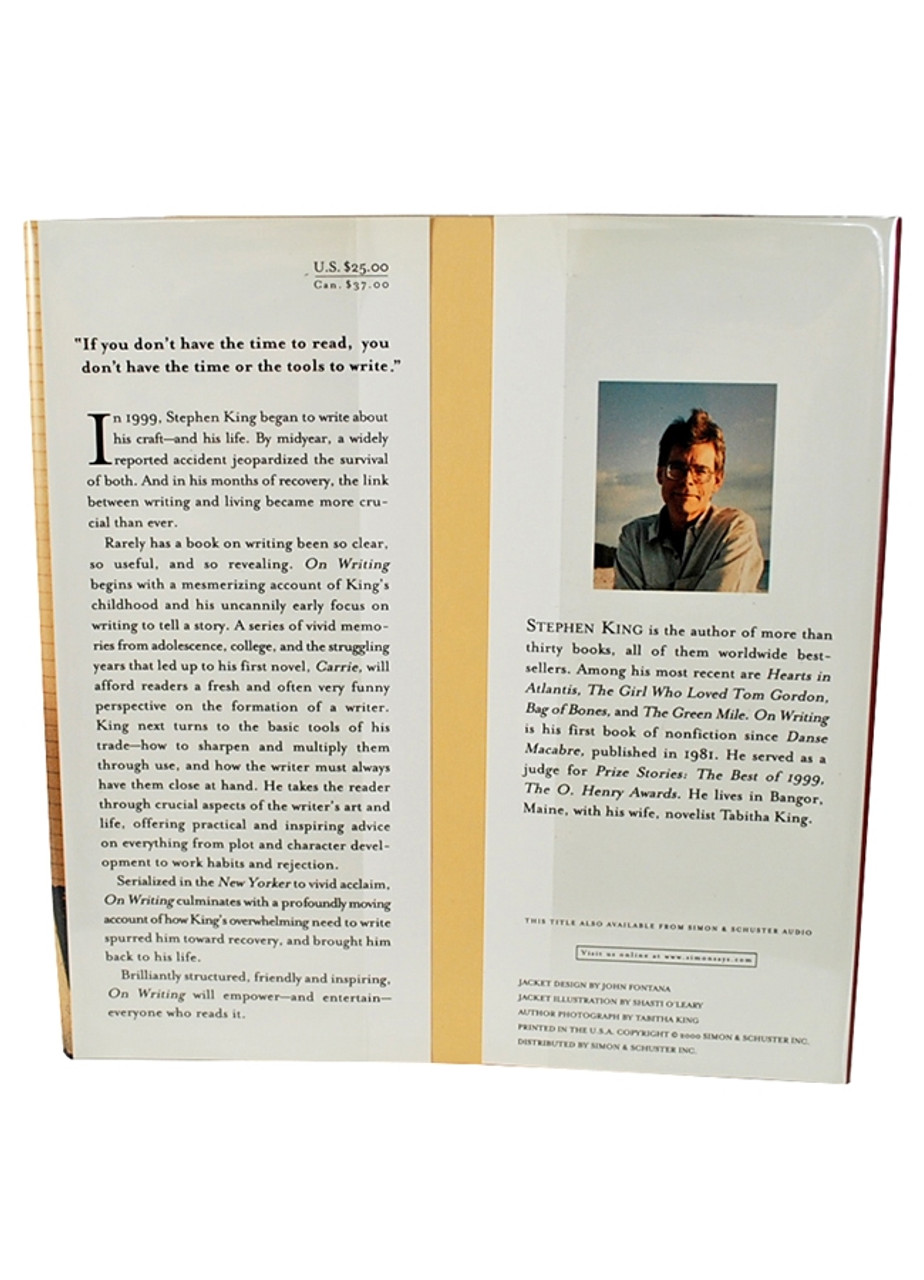 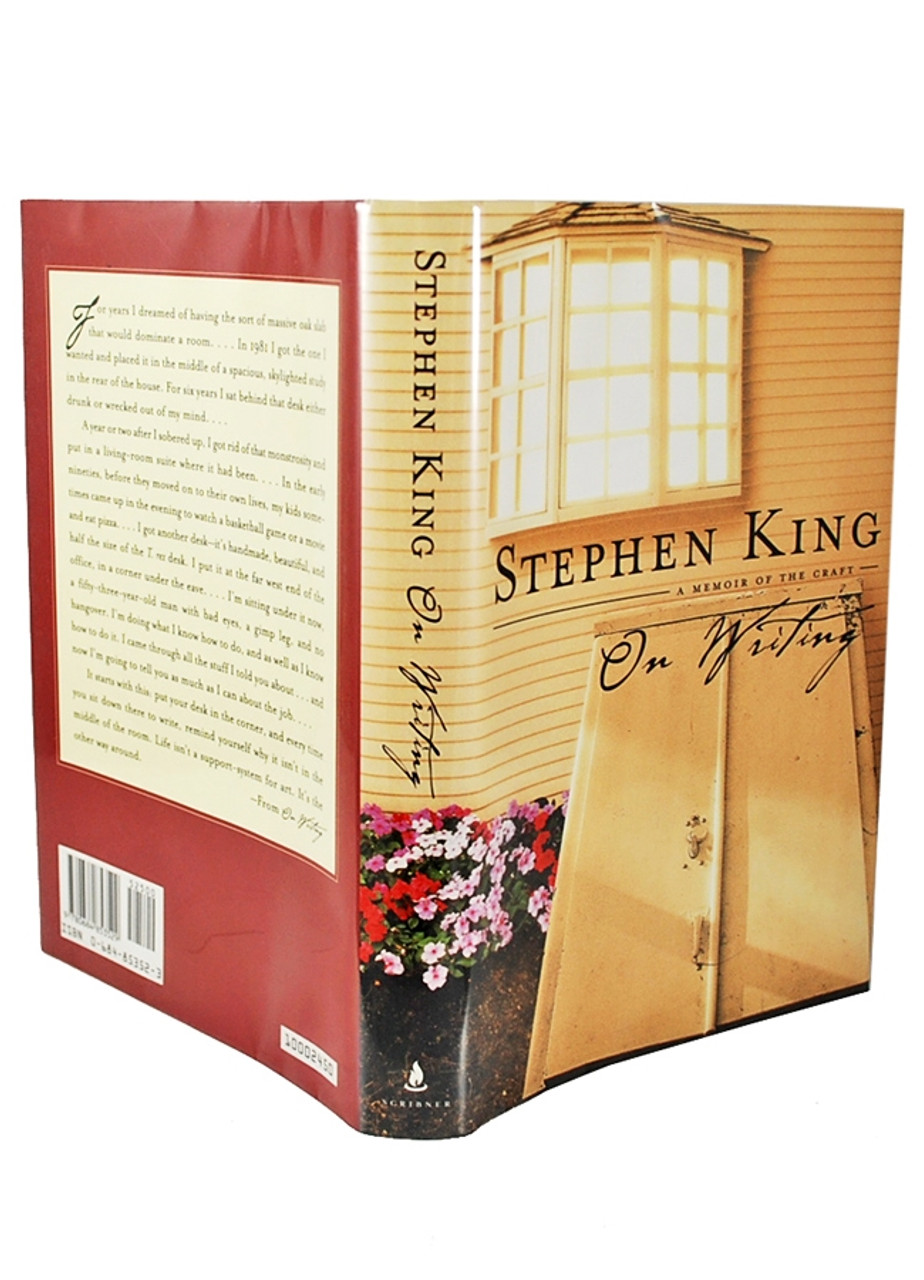 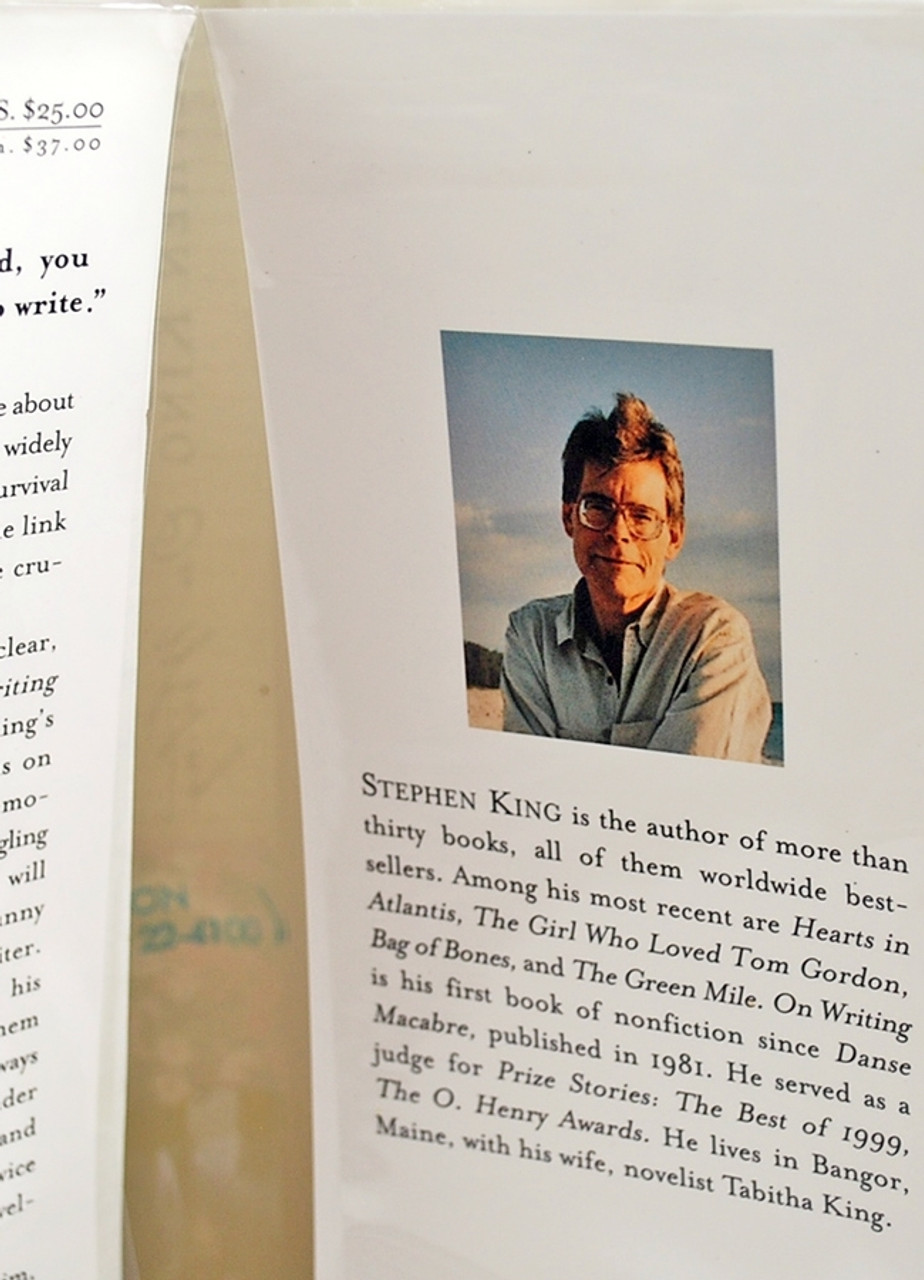 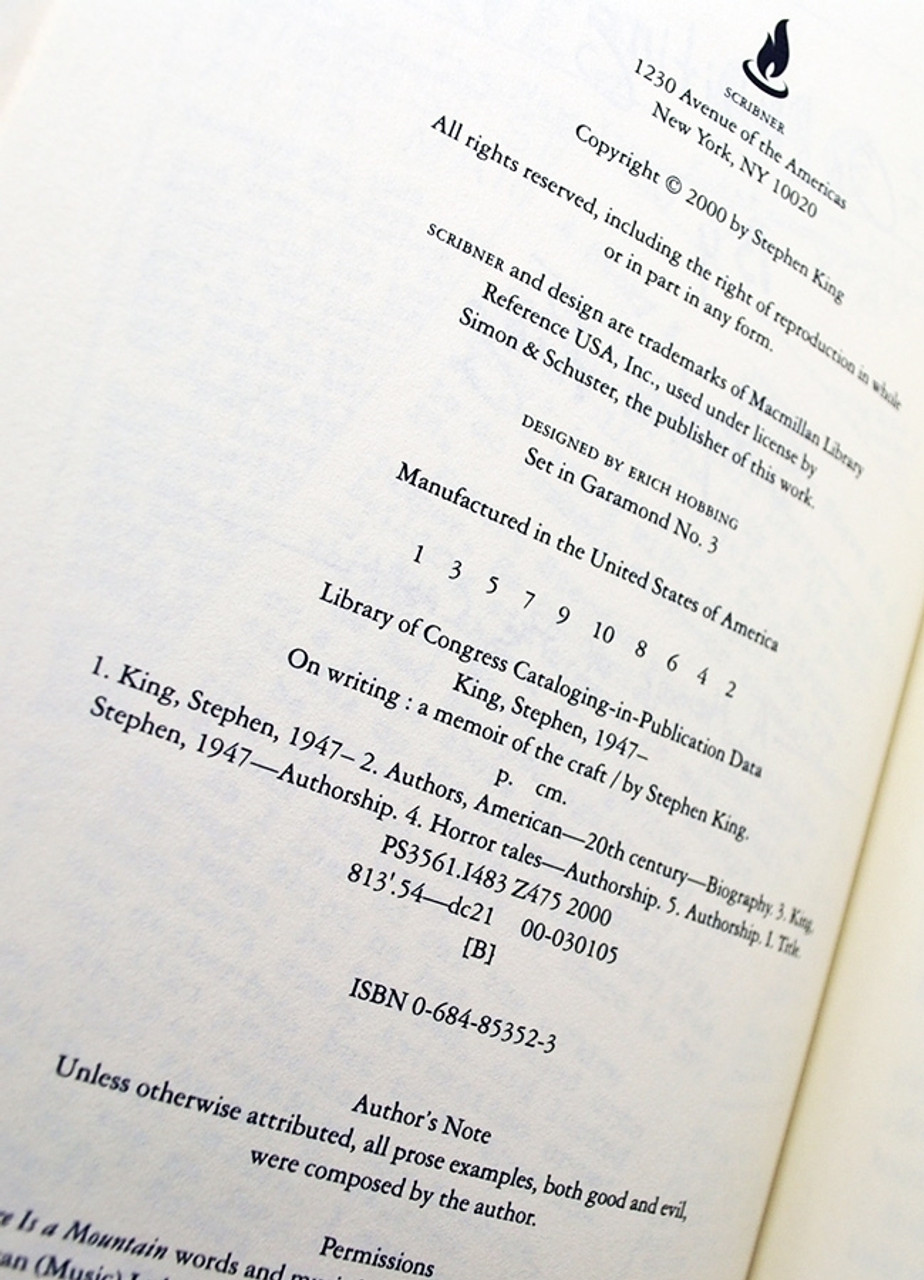 "This is a special book, animated by a unique intelligence, and filled with useful truth" (Michael Chabon).

On Writing was named by TIME Magazine as one of the 100 best and most influential non-fiction books since 1923.

"Immensely helpful and illuminating to any aspiring writer, this is Stephen King’s critically lauded, million-copy bestseller shares the experiences, habits, and convictions that have shaped him and his work."


Scribner, New York. 2000. "On Writing: A Memoir Of The Craft" by Stephen King. Signed First Edition, First Printing with full number line as required on the copyright page, 1 3 5 7 9 10 8 6 4 2. Signed by the author with a personal inscription:

"Long live the King", hailed Entertainment Weekly upon publication of Stephen King's On Writing. Part memoir, part master class by one of the bestselling authors of all time, this superb volume is a revealing and practical view of the writer's craft, comprising the basic tools of the trade every writer must have. King's advice is grounded in his vivid memories from childhood through his emergence as a writer, from his struggling early career to his widely reported, near-fatal accident in 1999, and how the inextricable link between writing and living spurred his recovery. Brilliantly structured, friendly and inspiring, On Writing will empower and entertain everyone who reads it, fans, writers, and anyone who loves a great story well told.

On Writing: A Memoir of the Craft is a memoir by American author Stephen King, that documents his experiences as a writer and relays his advice for aspiring writers. First published in 2000 by Charles Scribner's Sons, On Writing is King's first book after the car accident a year earlier. In 2010, Scribner republished the memoir as a 10th anniversary edition, which featured an updated reading list from King.

On Writing is organized into five sections: "C.V.", in which King highlights events in his life that influenced his writing career; "What Writing Is", in which King urges the reader to take writing seriously; "Toolbox", which discusses English mechanics; "On Writing", in which King details his advice to aspiring writers; and "On Living: A Postscript", in which King describes his van accident and how it affected his life.

In 2008, Entertainment Weekly included On Writing on their "The New Classics: Books – The 100 best reads from 1983 to 2008" list. Both Sharon Johnson in The Patriot-News and Julie Woo for the Associated Press, in separate reviews, praised King's advice as "solid". John Mark Eberhart, writing in the Sunday Free Lance-Star, called King's writing advice "pedestrian", but ultimately concluded that On Writing was "a slight but transitionally important work that should lead [King] to better things."


Stephen King is the author of more than fifty books, all of them worldwide bestsellers. His recent work includes The Bill Hodges Trilogy, Revival, and Doctor Sleep. His novel 11/22/63 was named a top ten book of 2011 by The New York Times Book Review and won the Los Angeles Times Book Prize for Mystery/Thriller as well as the Best Hardcover Book Award from the International Thriller Writers Association. He is the recipient of the 2003 National Book Foundation Medal for Distinguished Contribution to American Letters. He lives in Bangor, Maine, with his wife, novelist Tabitha King.

Hardcover: Very Fine without any flaws. A wonderful bring clean copy without any other marks, writings , or stamps. Clean & straight boards. No attached bookplates or indication of any removed. A well-cared for book, protected from any potential damage. Unread book with square and tight spine.

Personally signed by Stephen King directly onto the title page and one of only 400 signed copies. The University of Maine Press, Orono, Maine. Nov. 2016. Stephen King "Hearts in...