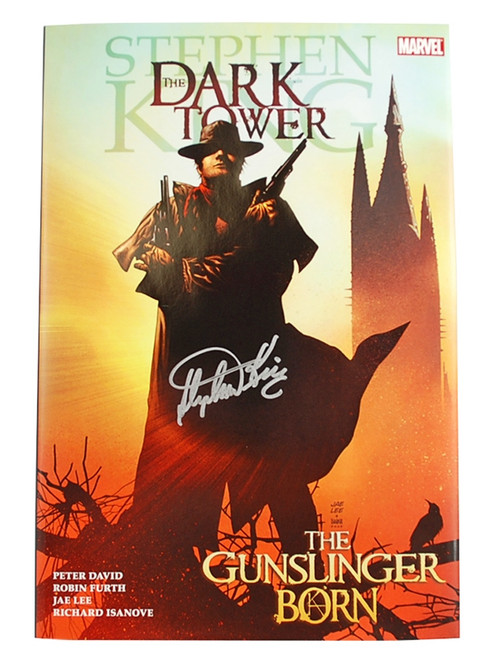 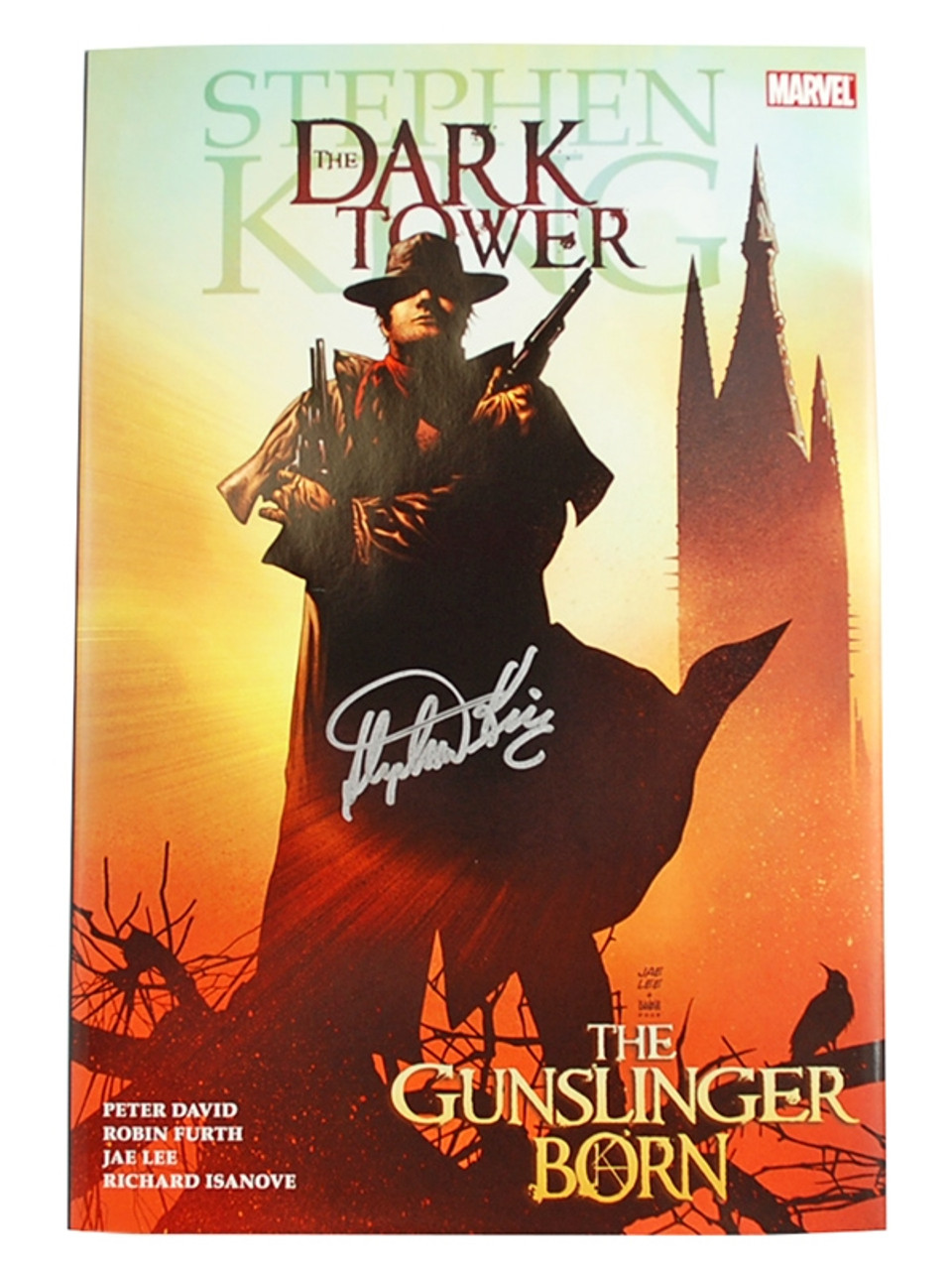 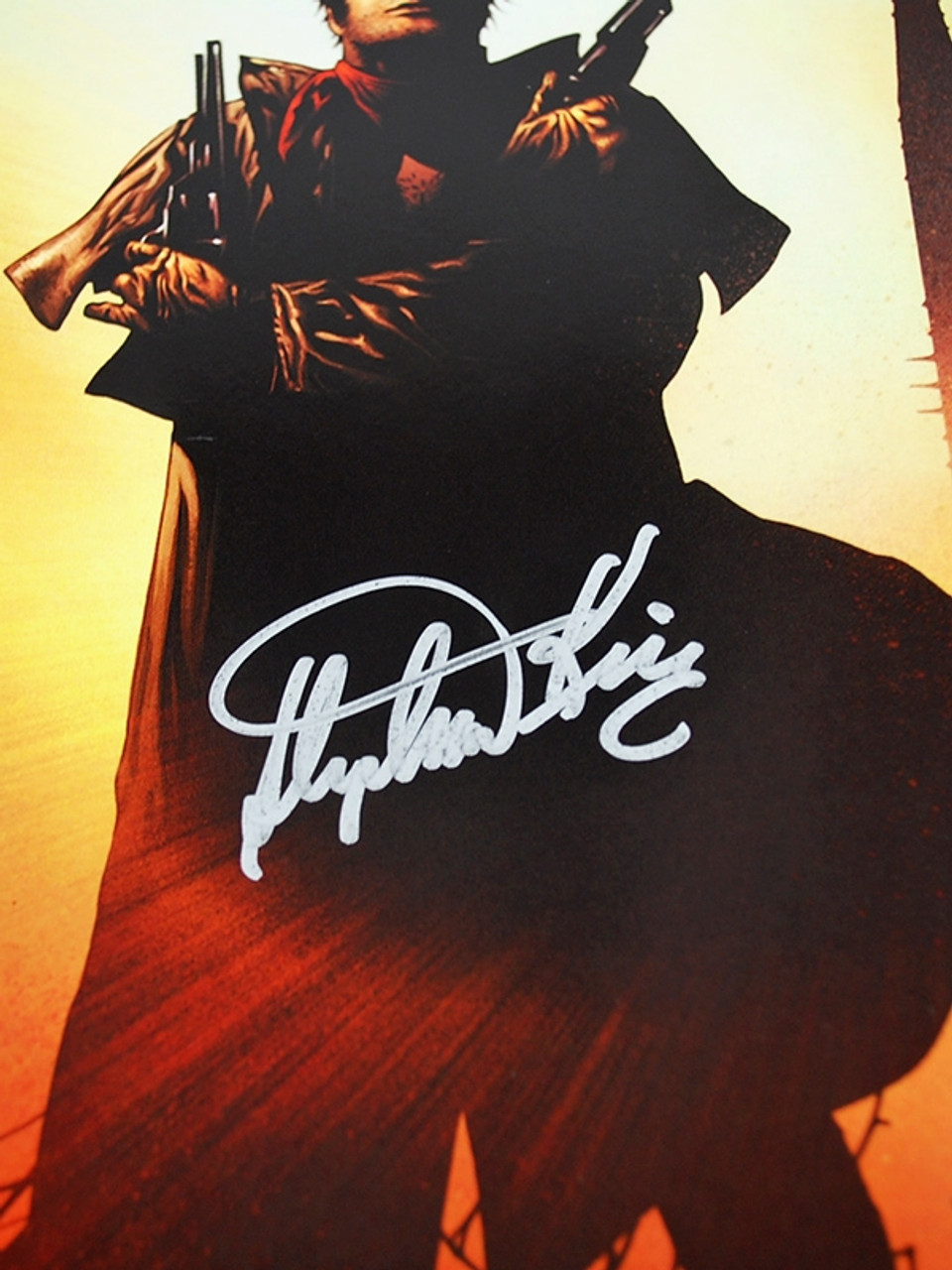 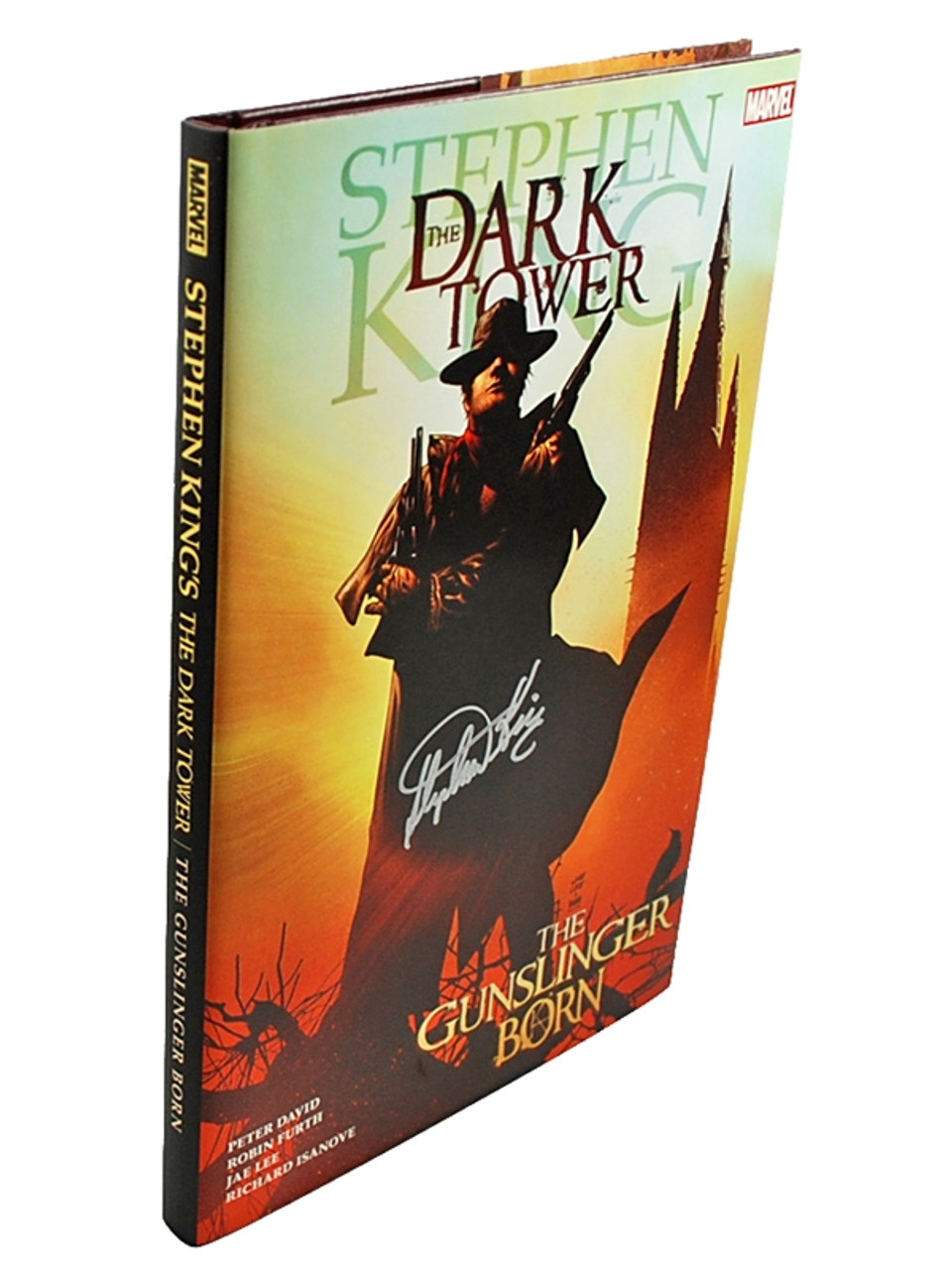 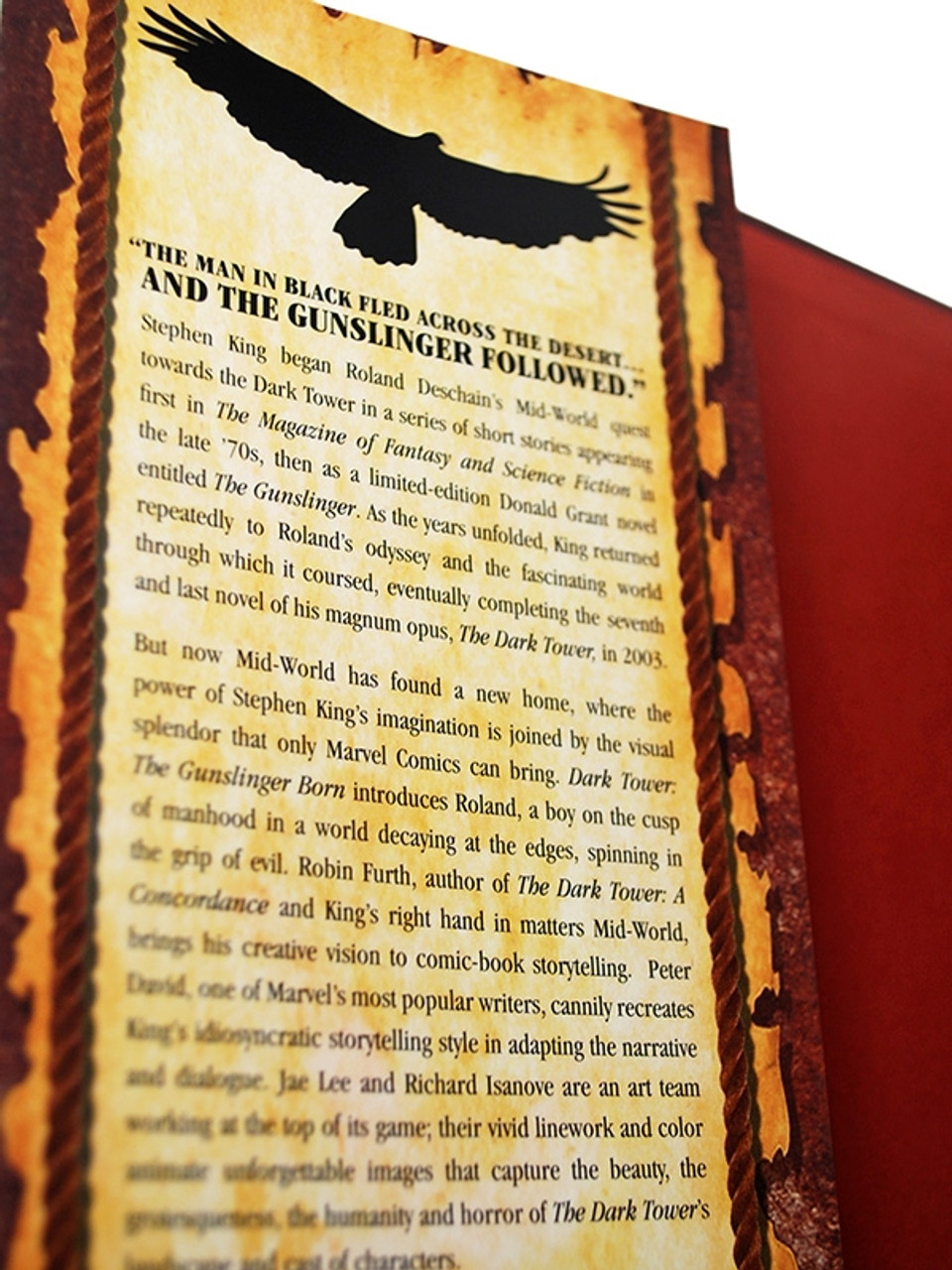 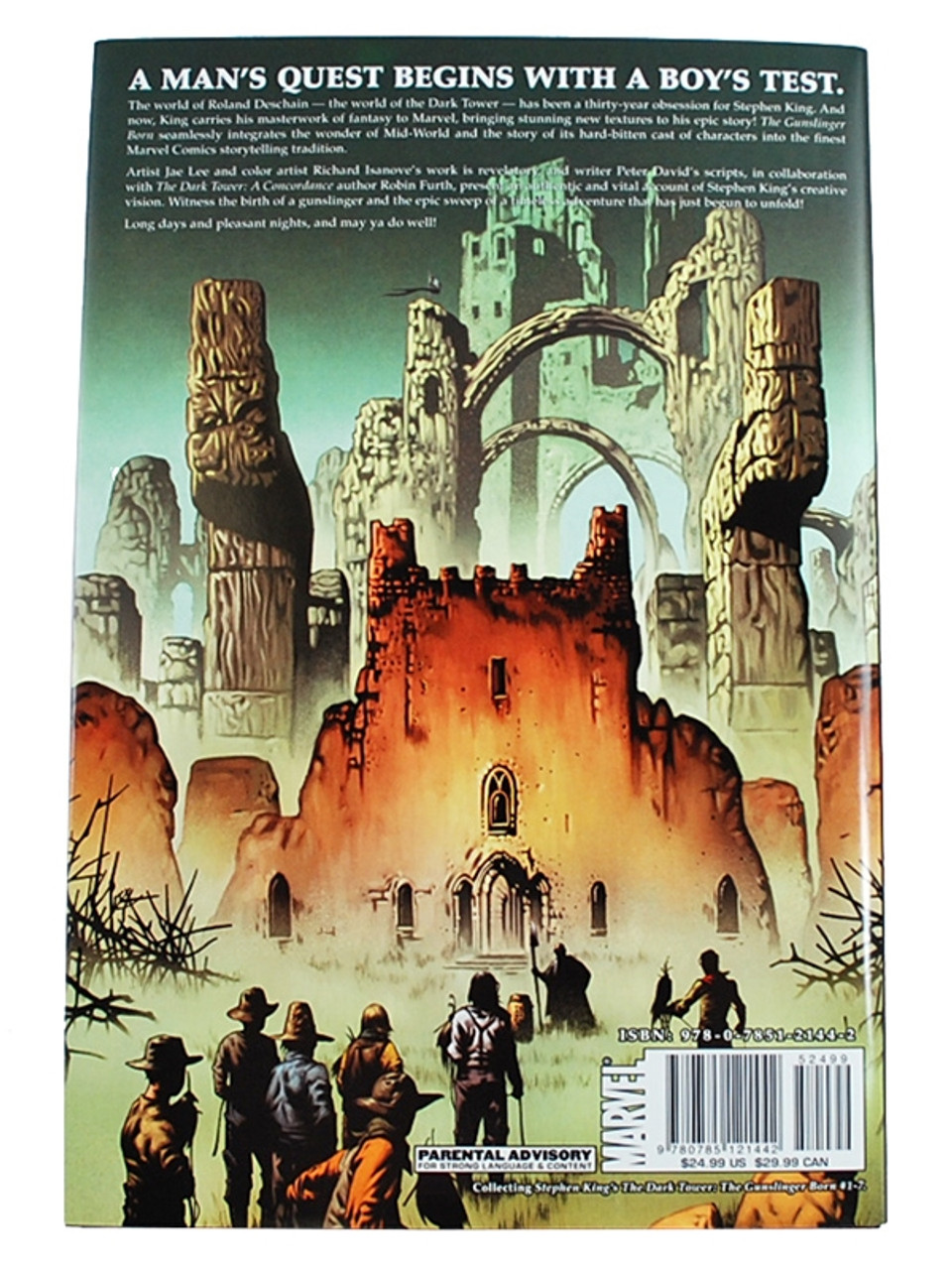 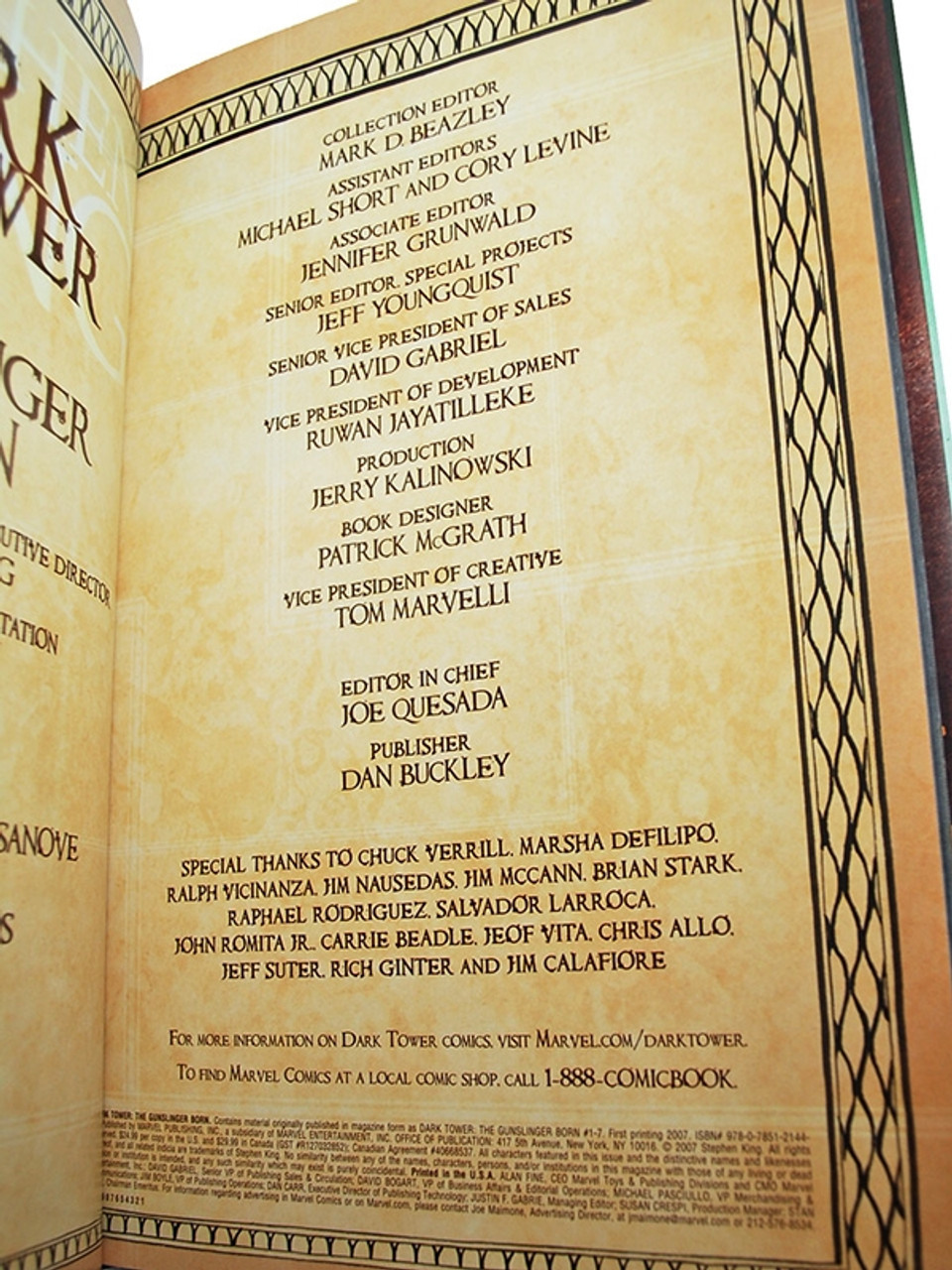 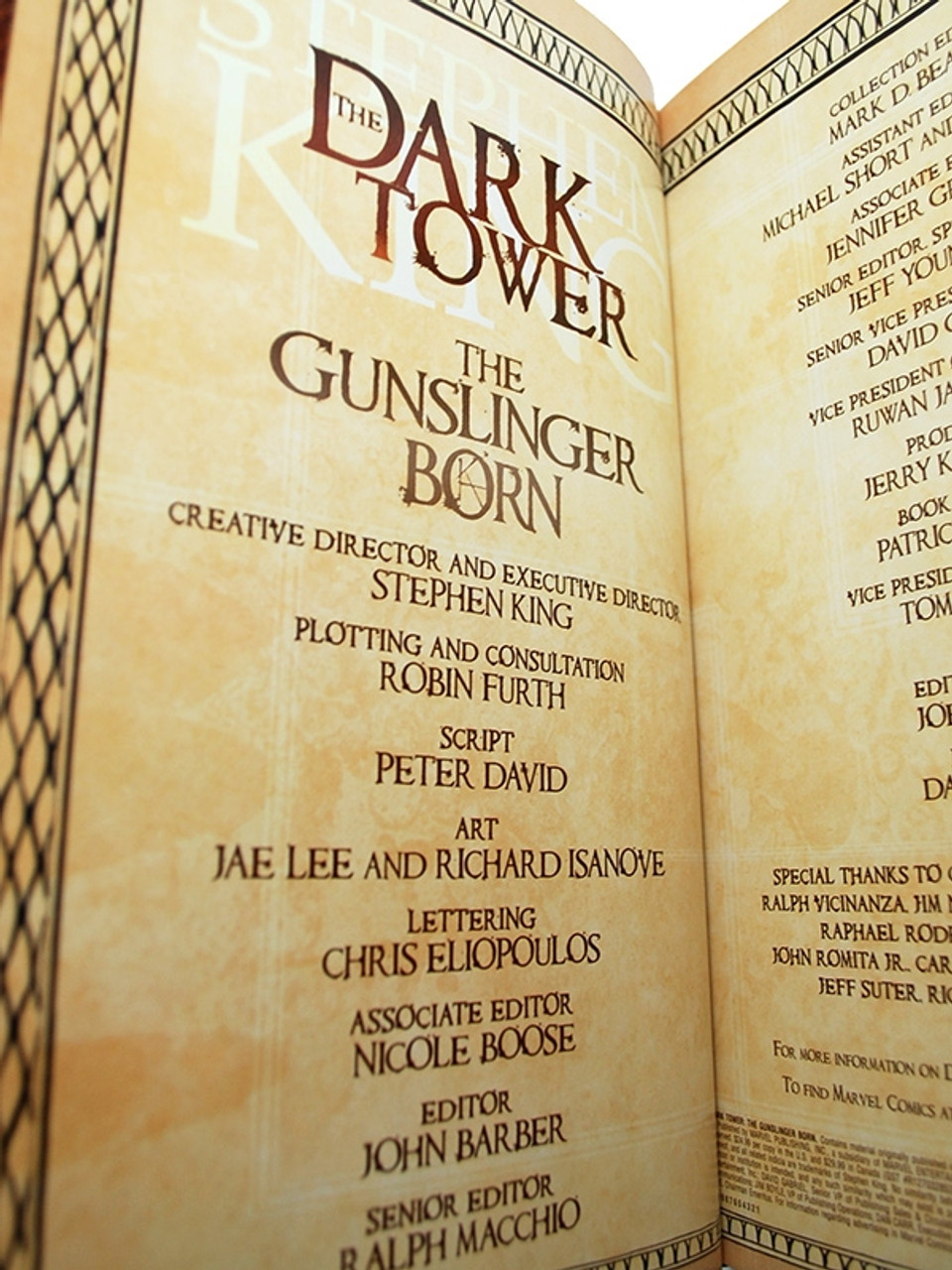 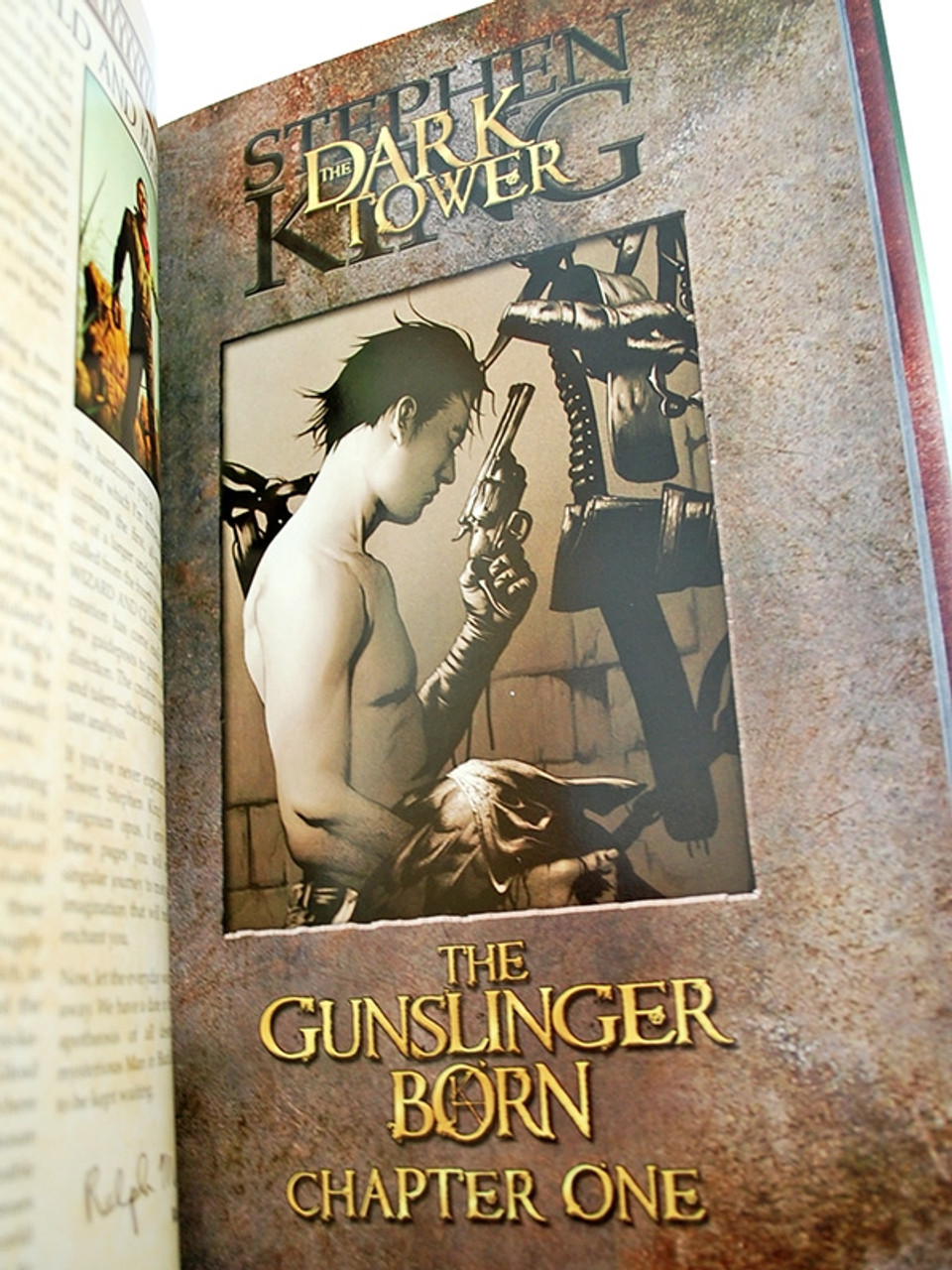 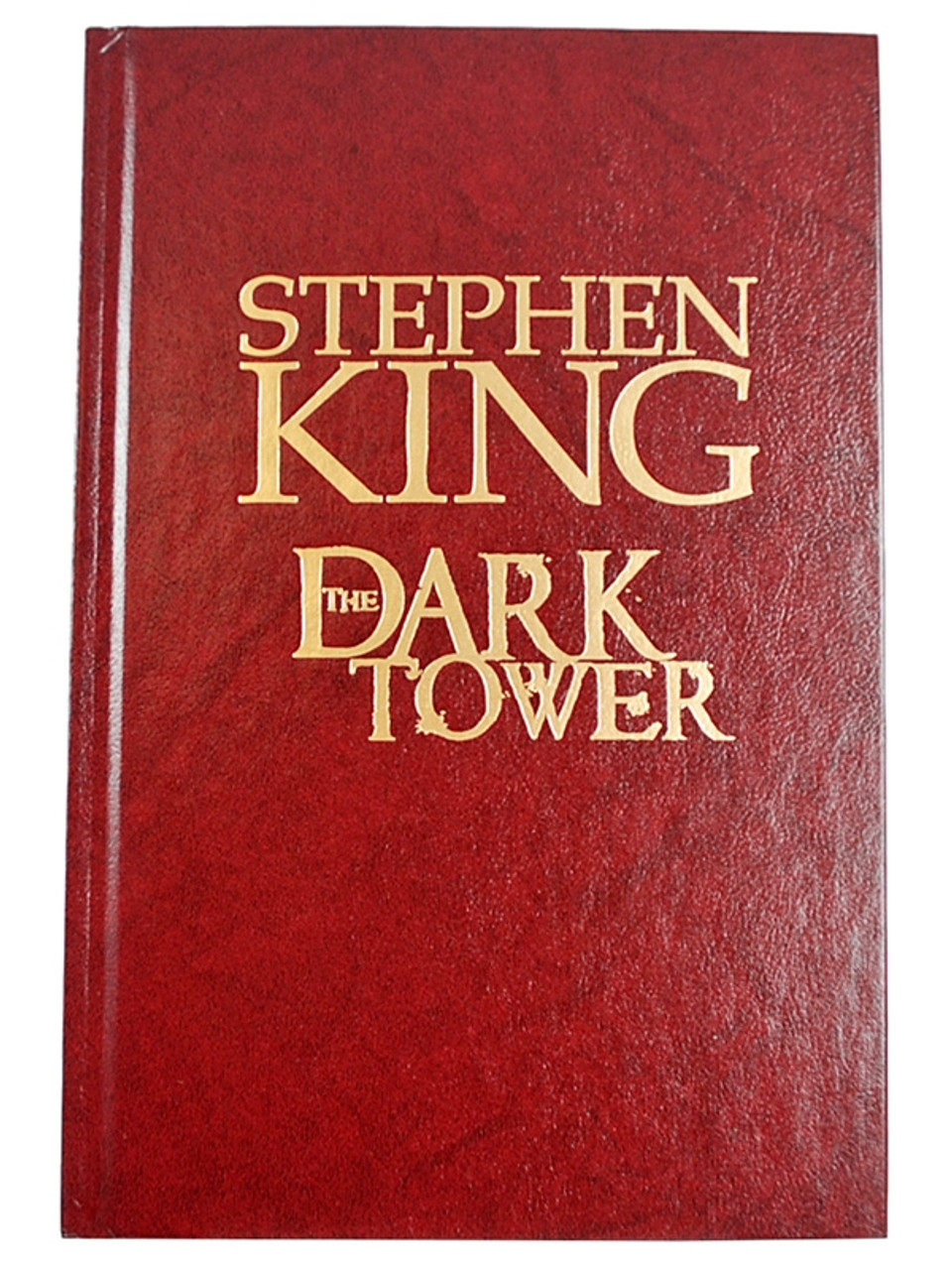 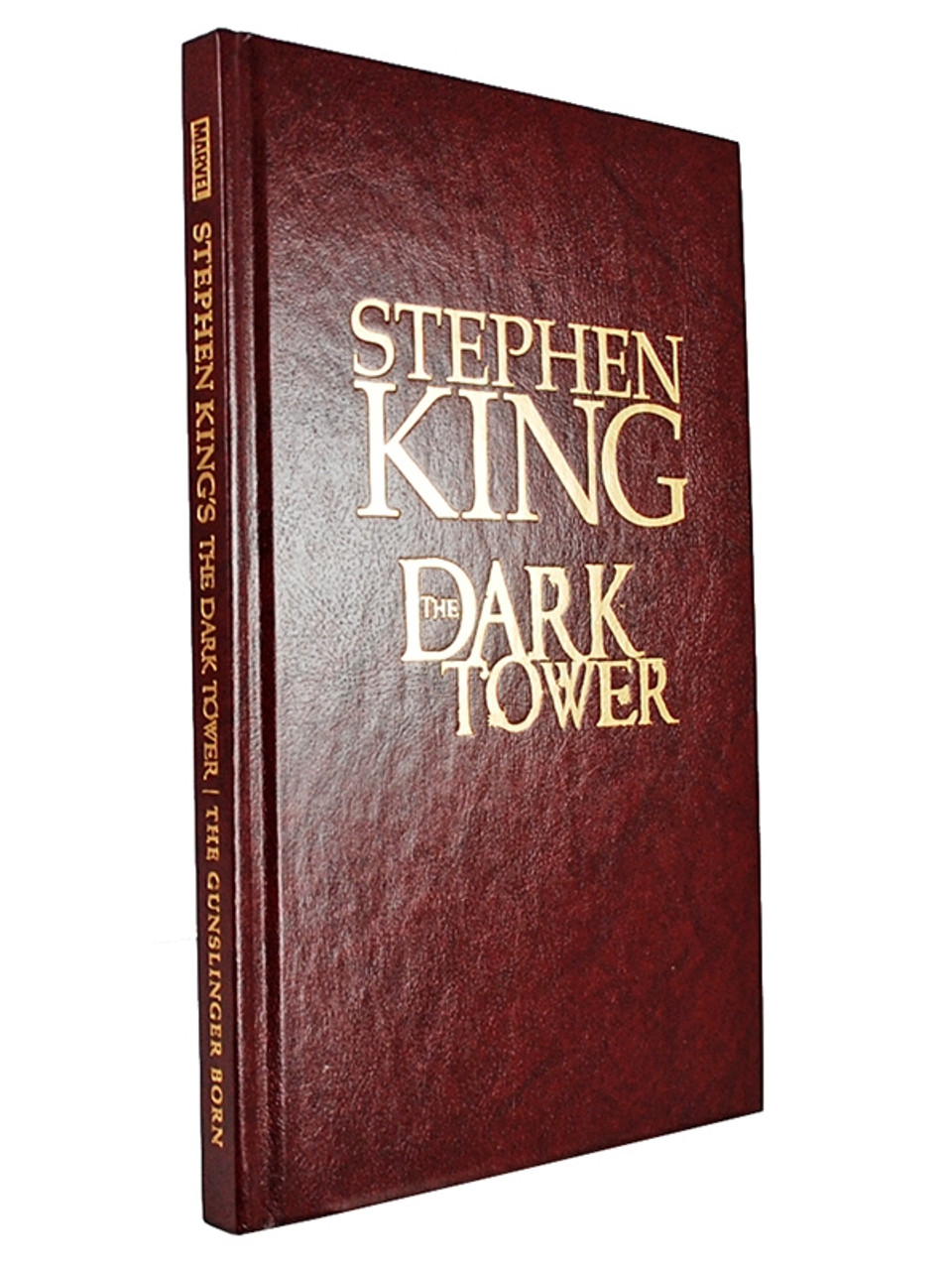 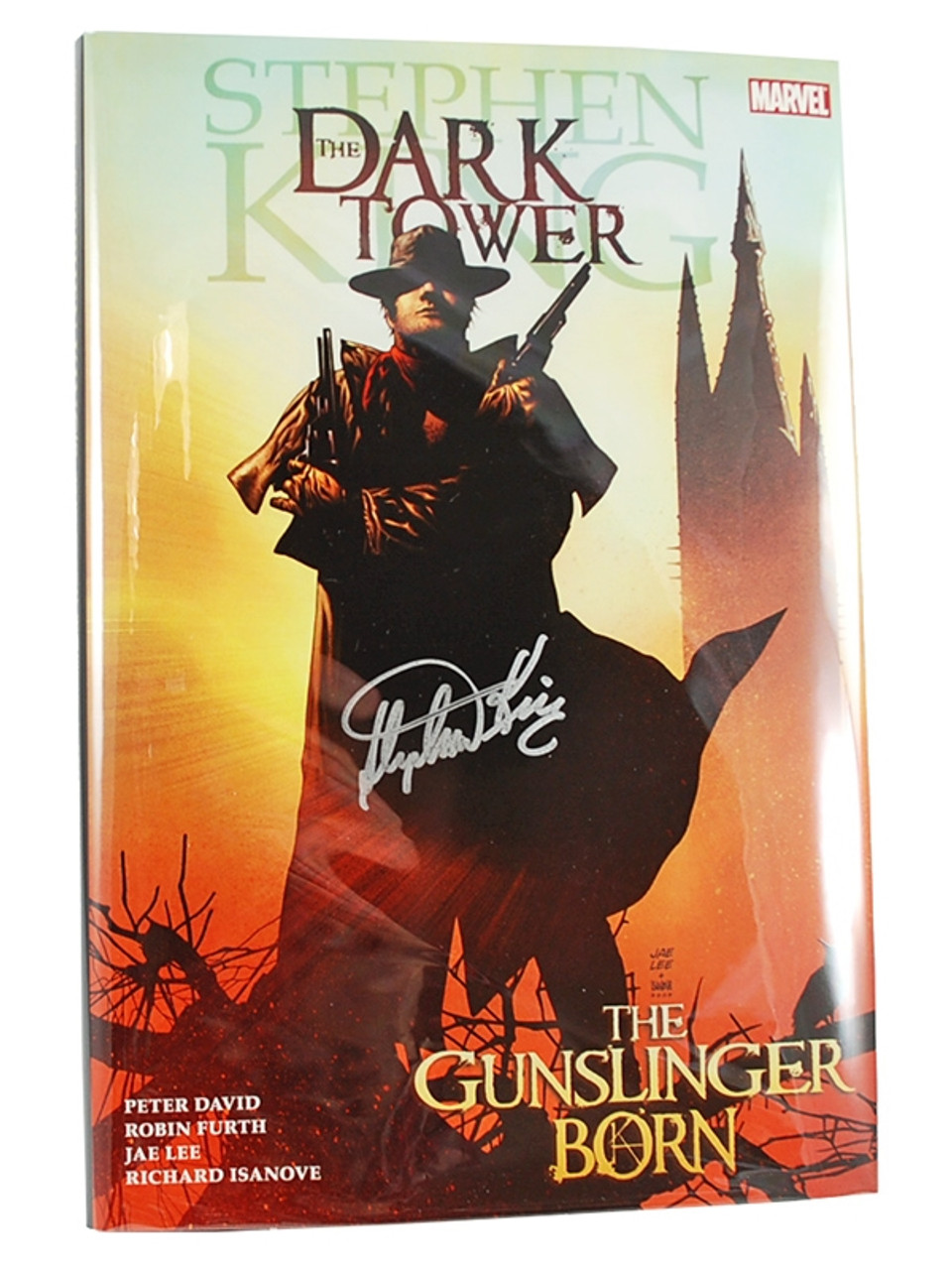 A rare collectible First Edition of The Gunslinger Born, personally signed by Stephen King directly onto the front of the dust-jacket.

"A MAN'S QUEST BEGINS WITH A BOY'S TEST"

Marvel Comics, November 21, 2007 "The Dark Tower: The Gunslinger Born" #1-7. Hardcover comic with dust-jacket. This first edition is special because it has been personally signed by Stephen King with a silver sharpie directly onto the front of the dust-jacket. Stephen King signed 100 of these which were distributed to comic book sellers the day before the publication date. 240 pages. Peter David. Robin Furth. Jae Lee. Richard Isanove.

"The man in black fled across the desert, and the gunslinger followed." With those words, millions of readers were introduced to Stephen King's Roland - an implacable gunslinger in search of the enigmatic Dark Tower, powering his way through a dangerous land filled with ancient technology and deadly magic. Now, in a comic book personally overseen by King himself, Roland's past is revealed! Sumptuously drawn by Jae Lee and Richard Isanove, adapted by long-time Stephen King expert Robin Furth (author of Stephen King's The Dark Tower: A Concordance) and scripted by New York Times bestseller Peter David, this series delves in depth into Roland's origins - the perfect introduction to this incredibly realized world; while long-time fans will thrill to adventures merely hinted at in the novels. Be there for the very beginning of a modern classic of fantasy literature! Collects Dark Tower: The Gunslinger Born #1-7.

This comics adaptation (including prequel) of King's Dark Tower: The Gunslinger Born follows the early days of the Gunslinger, Roland Deschain. For the first hundred pages or so, you think you're in the old American West, until we come across a landscape littered with rusted oil rigs and vintage WW2 Panzer tanks. This sort of future-past otherworldliness typifies Roland's experience as he begins his quest as a teenage cross between Malory's Lancelot and Sergio Leone's Man with No Name. He and his young friends, high-born sons of the landowning political cadre called the Affiliation, are student-apprentices in a sect of knights bearing an arcane code of ethics, who must undergo strict training in order to bear the title Gunslinger. Early on, Roland earns the title Gunslinger by overcoming his teacher in a masterful fight sequence. Eventually, Roland and a group of fellow Gunslingers are sent to spy on the evil John Farson. Pretty soon, things get medieval. Maidens in distress appear, as do sadistic bad guys, witches and a weird monster called the Thinny. The Gunslinger's world is a weird hodge-podge of 1066 Hastings, 1865 Appomattoxand 1941 Warsaw—and in places the mélange is quite exciting. Still, a lot of The Gunslinger Born's plot is unclear and the prose purplish. Characters walk on and walk off, communicating in monotonous speeches wedged between scenes of murder and torture.

The requisite love affair between Roland and young Susan Delgado is a bit passionless, and there's very little mirth; emotional ranges stretch from grimacing endurance to abject misery. Writer/adapter Peter David turns some nice phrases in a sort of sub-Faulknerian style, but the wordiness slows the action. At times, artist Jae Lee and colorist Richard Isanove are left with little to do other than create static pinup pages to accompany the prose. Nevertheless, there is a palpable charisma embedded in The Gunslinger Born—you can tell everyone involved is having a blast. Lee's drawings are smoothly rendered and realistic, yet sensually illustrative, and his art has never seemed so warm. And there's a touch of legendary underground comics artists Richard Corbin and Frank Frazetta in Isanove's palettes. The GunslingerBorn is the perfect starting point for those who think comics contain nothing but men in spandex costumes and masks. If it hooks new readers, that's good enough for me.Paul Pope is the artist/writer of the Eisner Award–winning graphic novel Batman Year 100 (DC Comics) and PulpHope: The Art of Paul Pope, recently published by AdHouse Books.

Very Fine/Very Fine without any flaws. A rare book in excellent original condition that exhibits clean and straight boards. No attached bookplates or indication of any removed. The dust-jacket includes a clear archival Mylar dust-jacket protector. Unread book with square and tight spine. The page edges are unmarked. Photos of actual item.